This is the second half of the trip. The first half was was in Perú (7 days) including Machu Picchu. An overview of the trip is provided in the post for Perú – Days 1 and 2. On day 8 we left Perú and flew to Quito, Ecuador which is where pick things up here.
Our trip from Cusco to Quito was a very long day. We had a very early one-hour flight to Lima, and then a four-hour (ended up five) layover. We said our goodbyes to Ernesto, and then headed to a very large and nice lounge courtesy of Priority Pass, joined by Wendy, Jim, Elise, and Curtis.
After our two-hour flight to Quito, we met up with Tomás, our Odyssey tour guide, and taking back roads for part of the trip, avoided rush hour traffic and arrived at the Swissôtel in a modern section north/northeast of the historical center.
Dinner was with the group at la Gloria, enjoying an octopus salad, delicious large shrimp, and finishing, for Eileen, chocolate Millefeuilles (a kind of Napoleon) with mocha ice cream, and for Larry, fruit with sherbet. 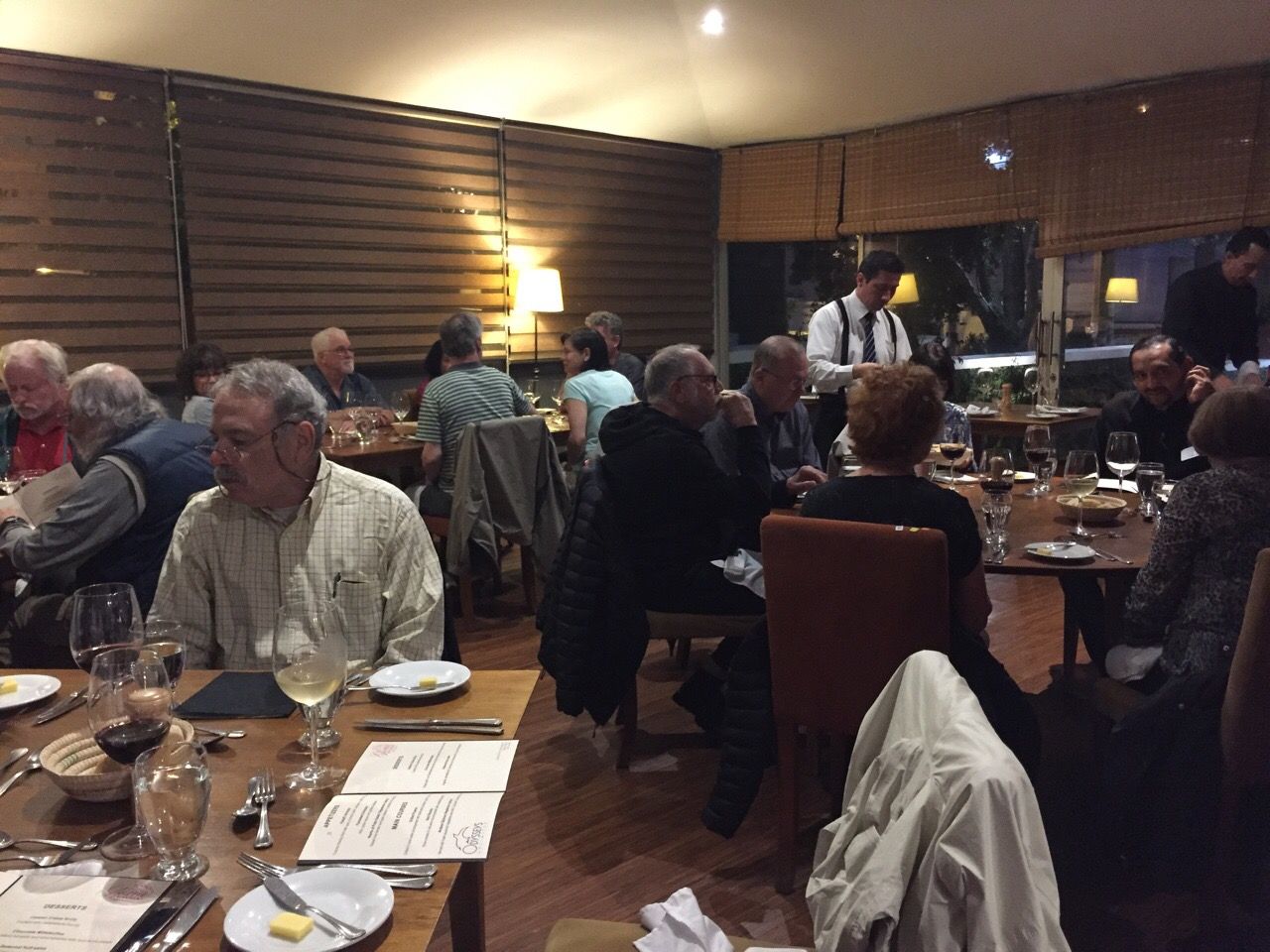 We turned in after a very long day.
Nestled in a valley surrounded by Andes volcanoes, Quito sits at over 9,000 feet above sea level and is said to be one of South America's most beautiful cities. Its mixture of pre-Columbian, Baroque, Spanish, Moorish, and Flemish architecture prompted UNESCO to declare colonial Quito a World Heritage site, the first city (rather than individual site) to be accorded this distinction. Quito became the capital of the newly formed Republic of Ecuador in 1830.
After a nice buffet breakfast, we drove to Parque Itchimbía, above the colonial section, for a panoramic view. The "Glass Palace", designed by Eiffel, used for events, sits at the high point of the overlook. 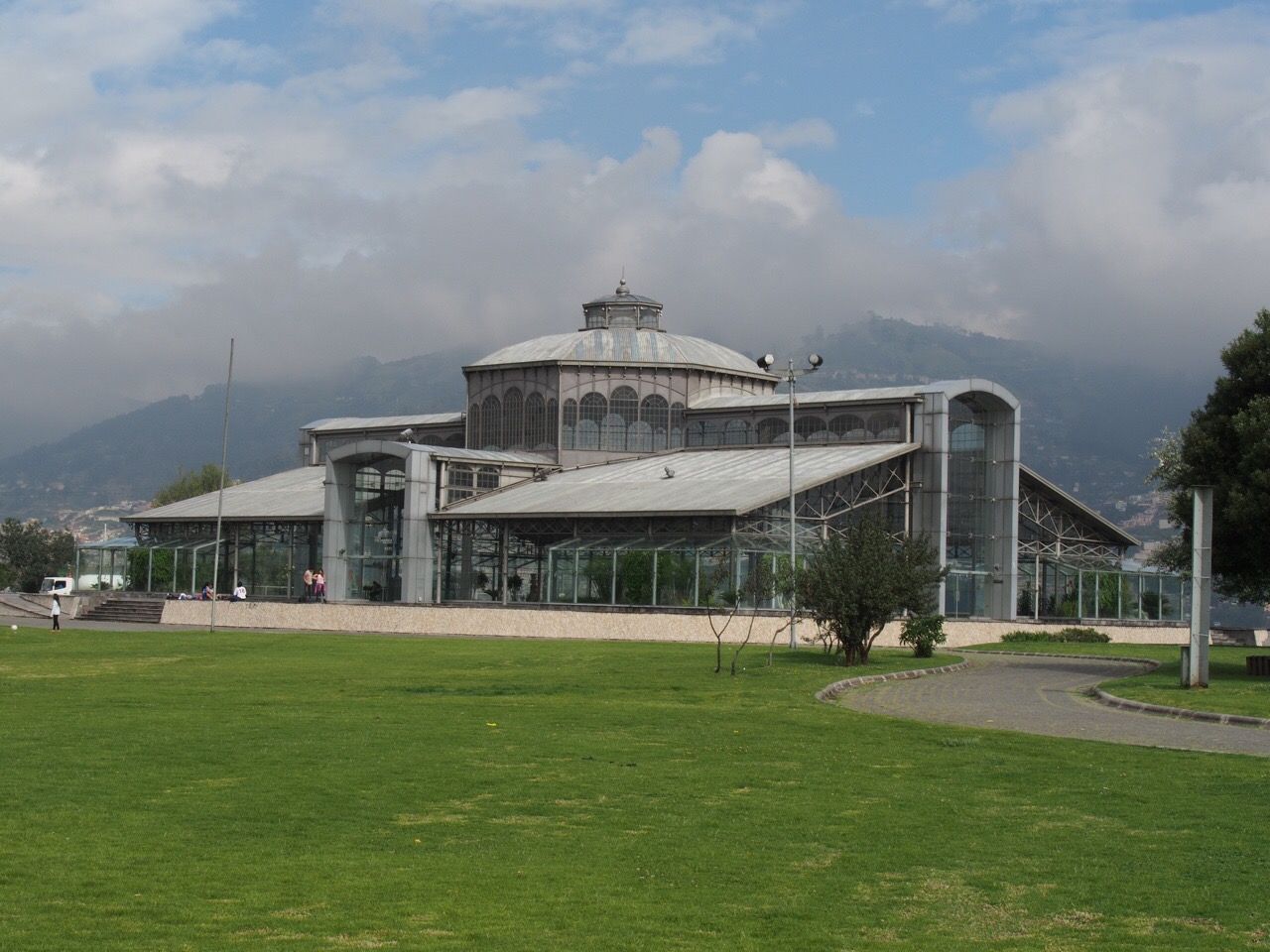 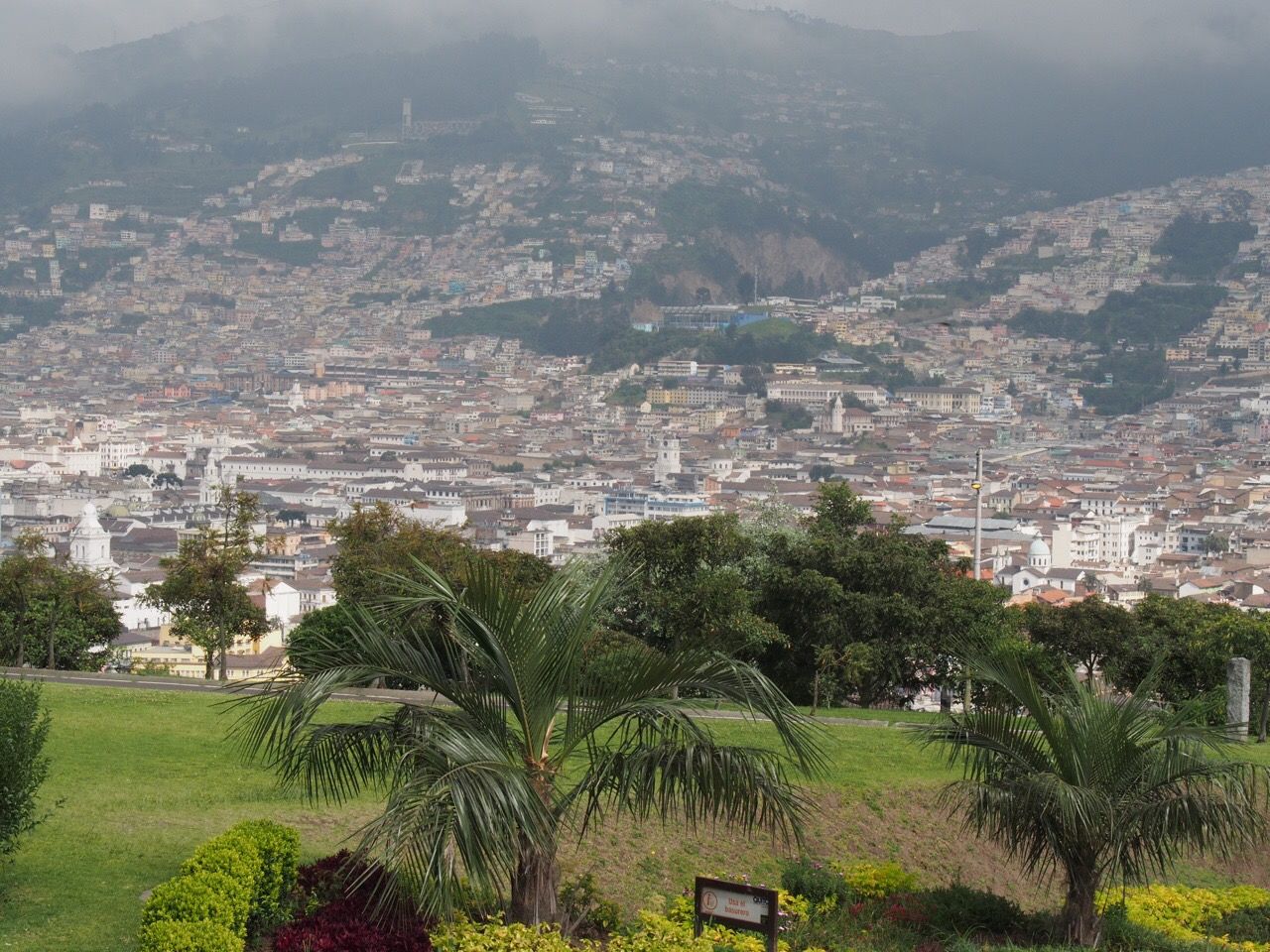 We drove to the colonial historical center for a walking tour, starting at the Independence Square/Plaza Grande and ending at Plaza San Francisco. Tomás pointed out the sights on the square: the collonnaded former Archbishop’s Palace, now shops and restaurants; the President’s Palace, with its beautiful, imported-from-France iron balconies; the Cathedral; the former palace of Pizarro, though only his daughter ever lived there; City Hall, on the front steps of which the City Band happened to be playing. In the center is a monument to their 1809 independence from Spain, sporting a condor (Ecuador) flying high, and a lion (Spain) with its tail between its legs at the base. We walked around, enjoying the band, and buying scarves from street vendors. 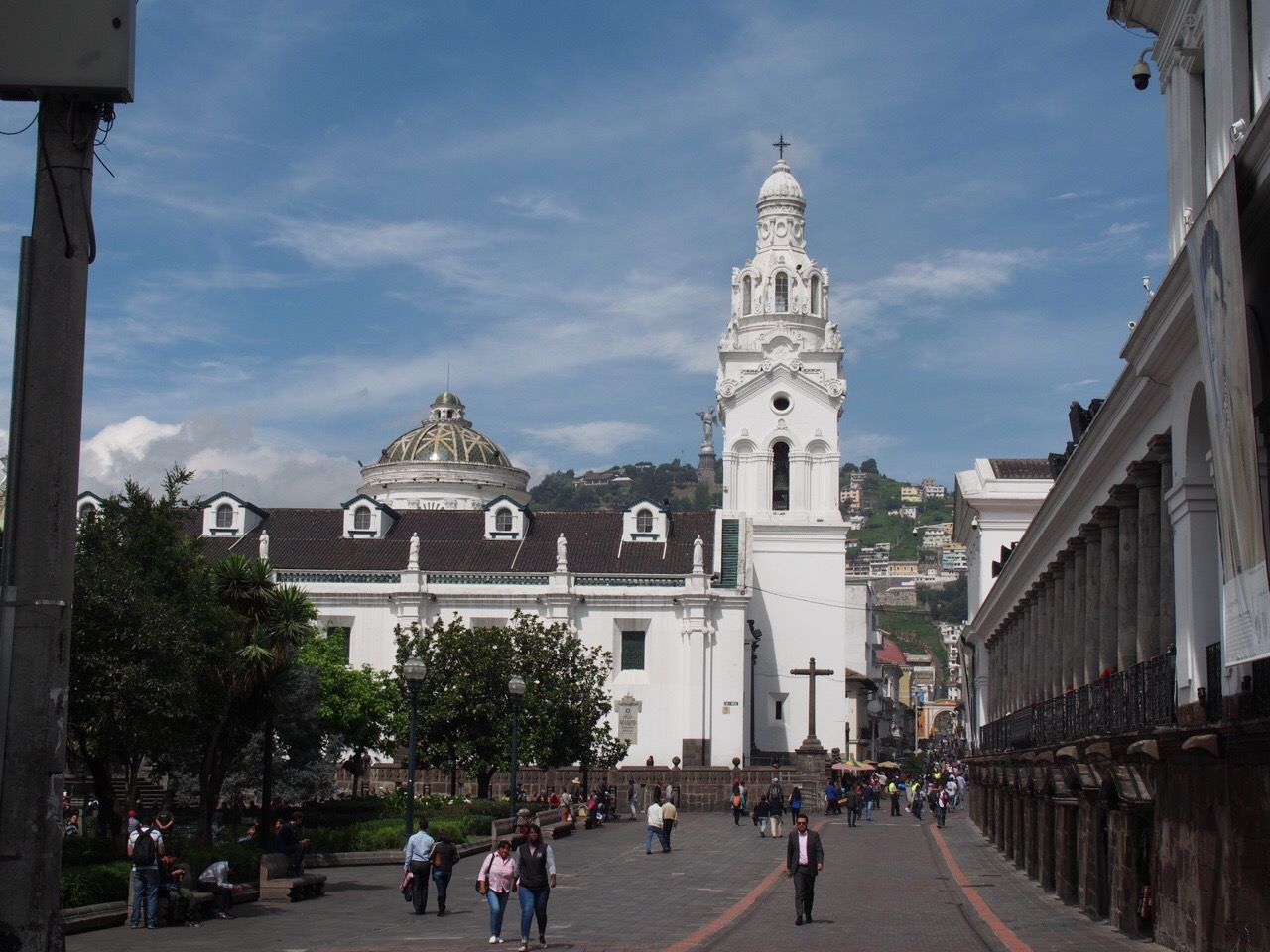 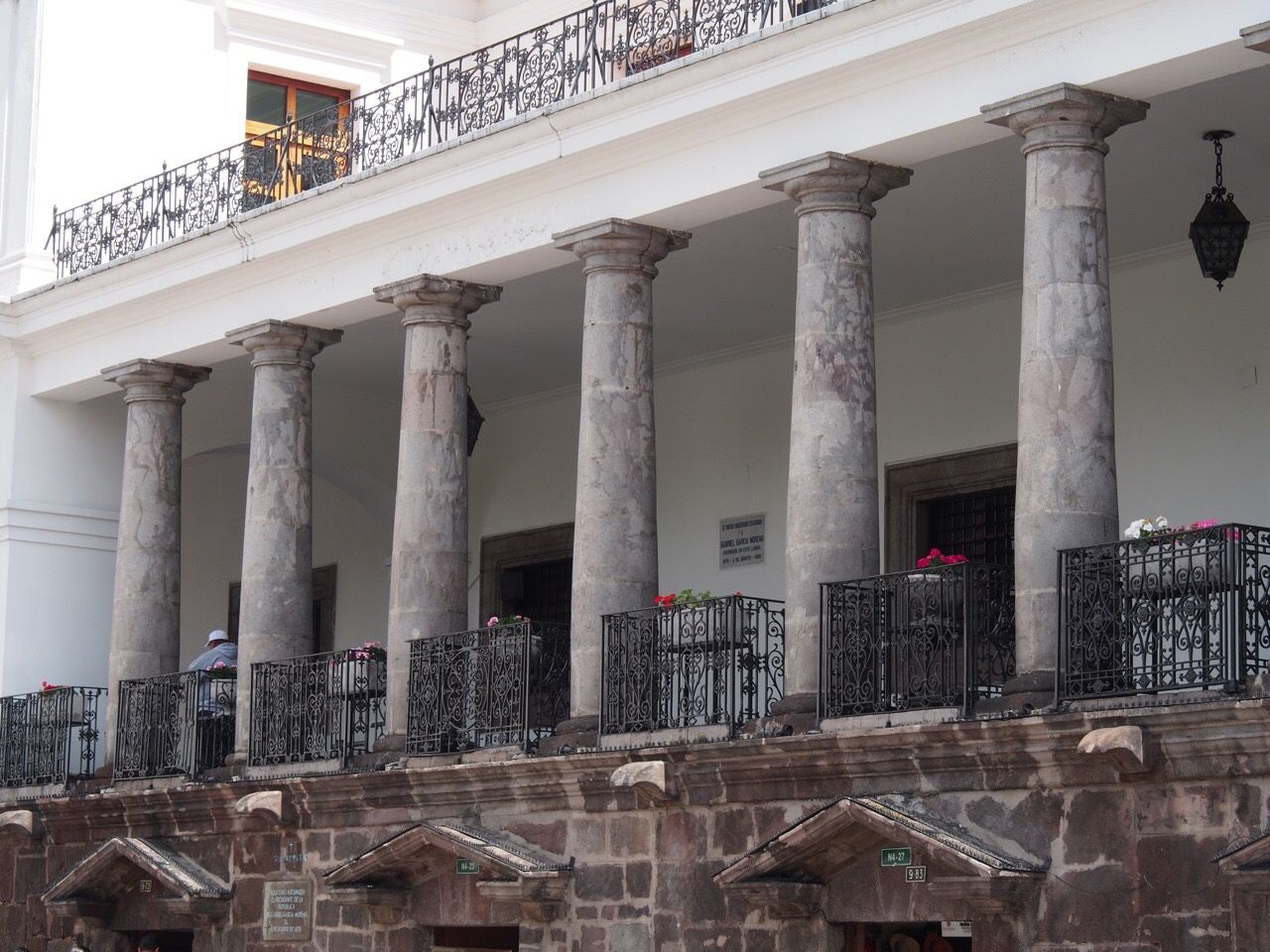 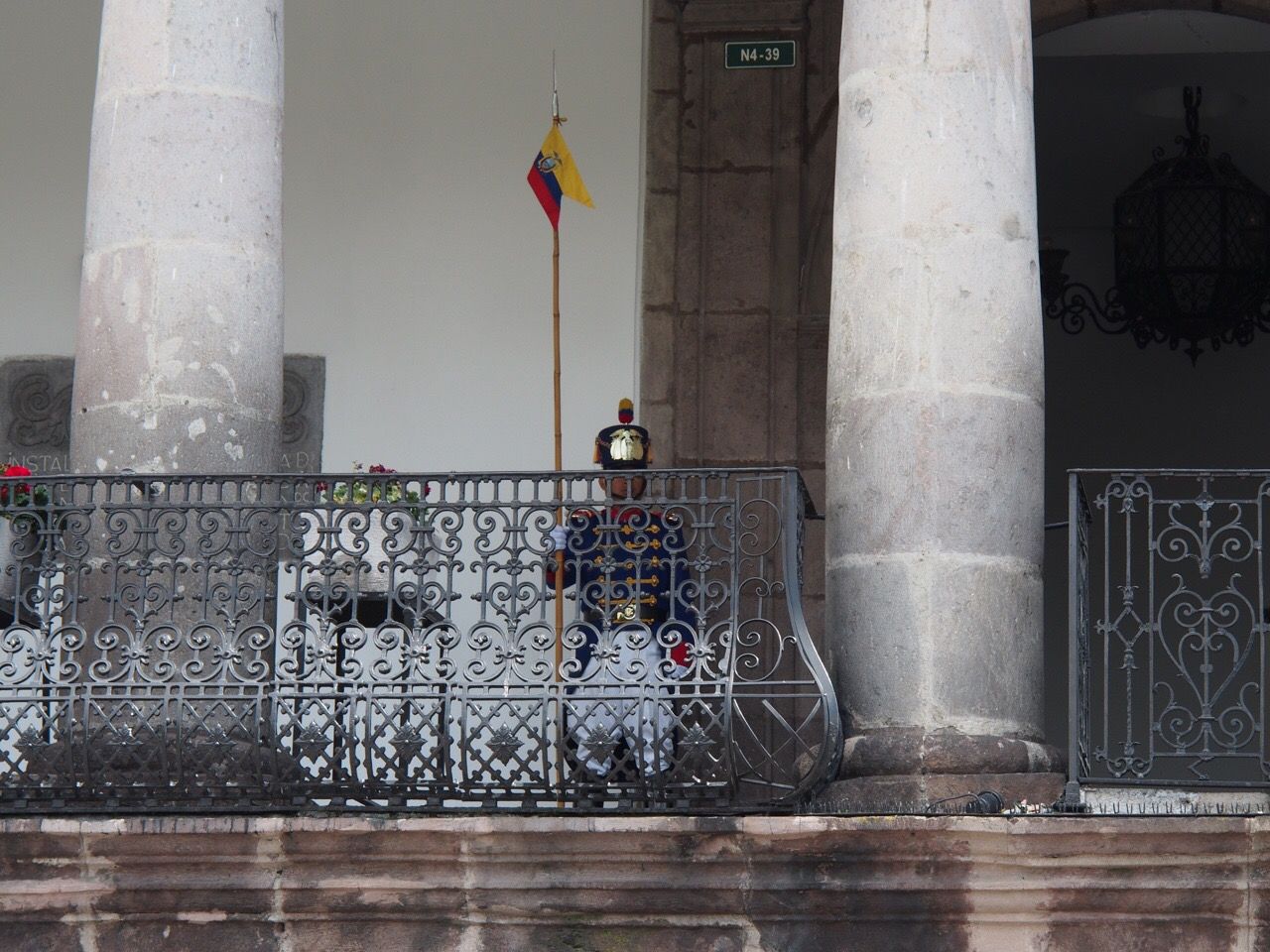 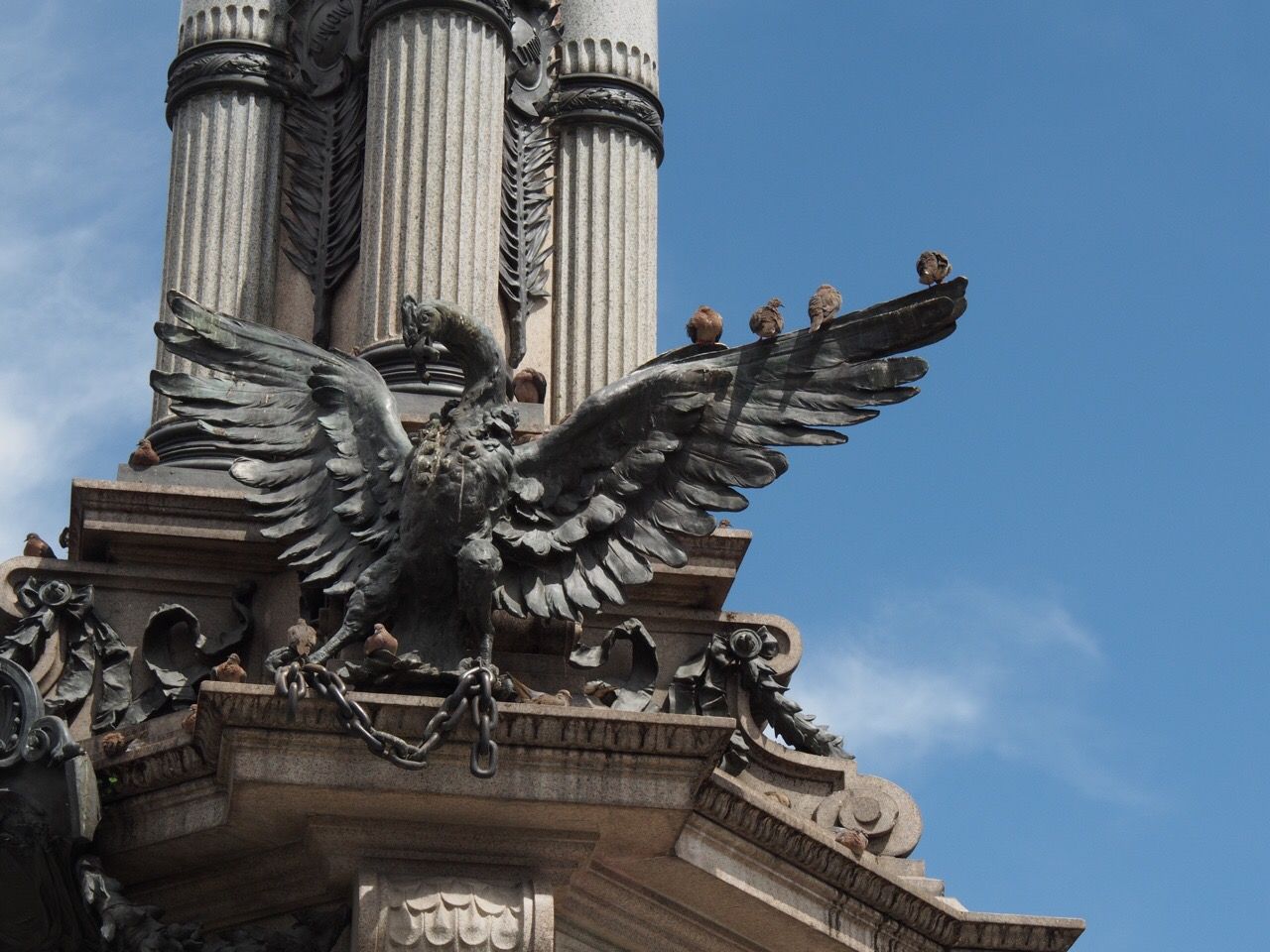 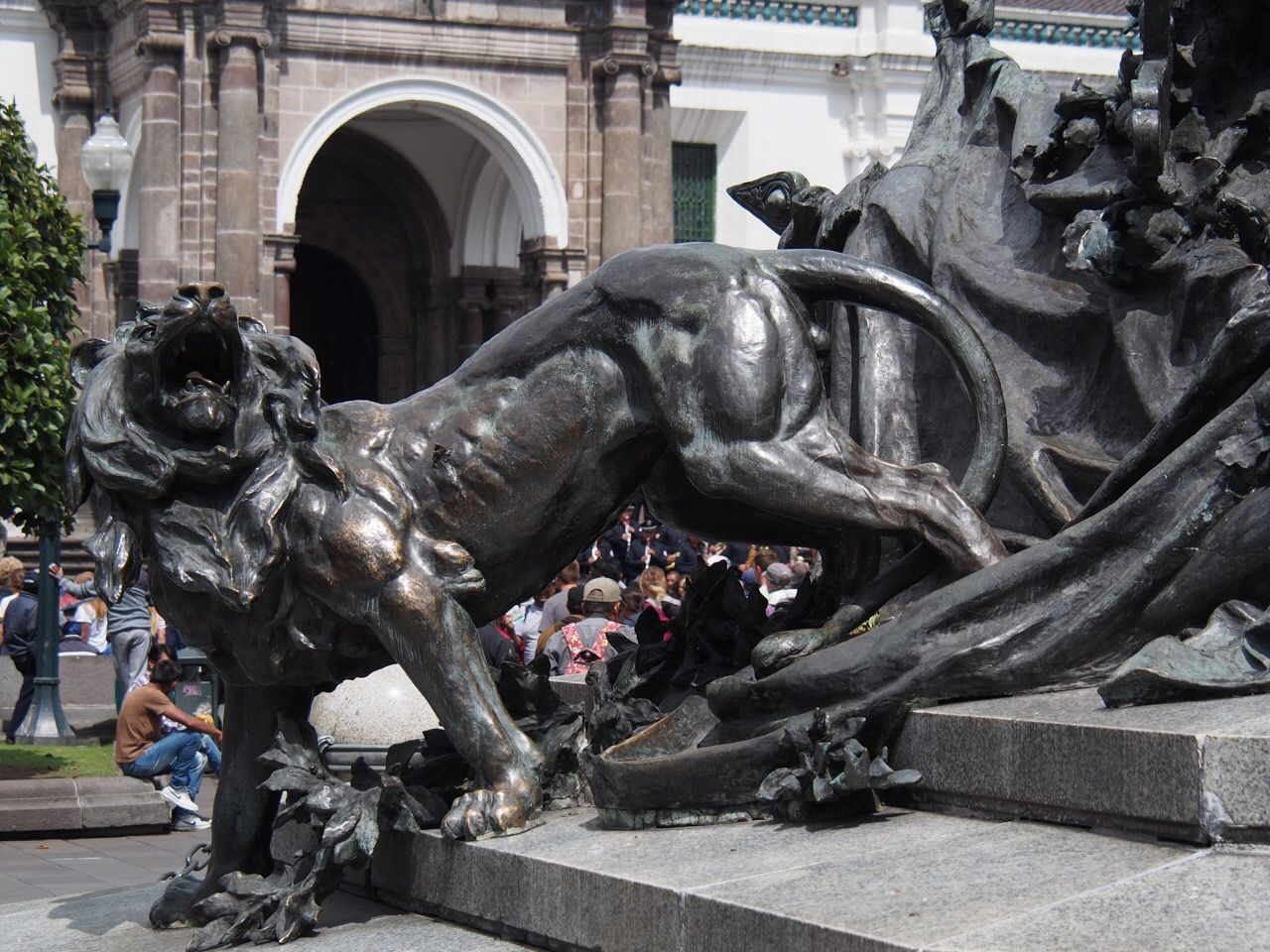 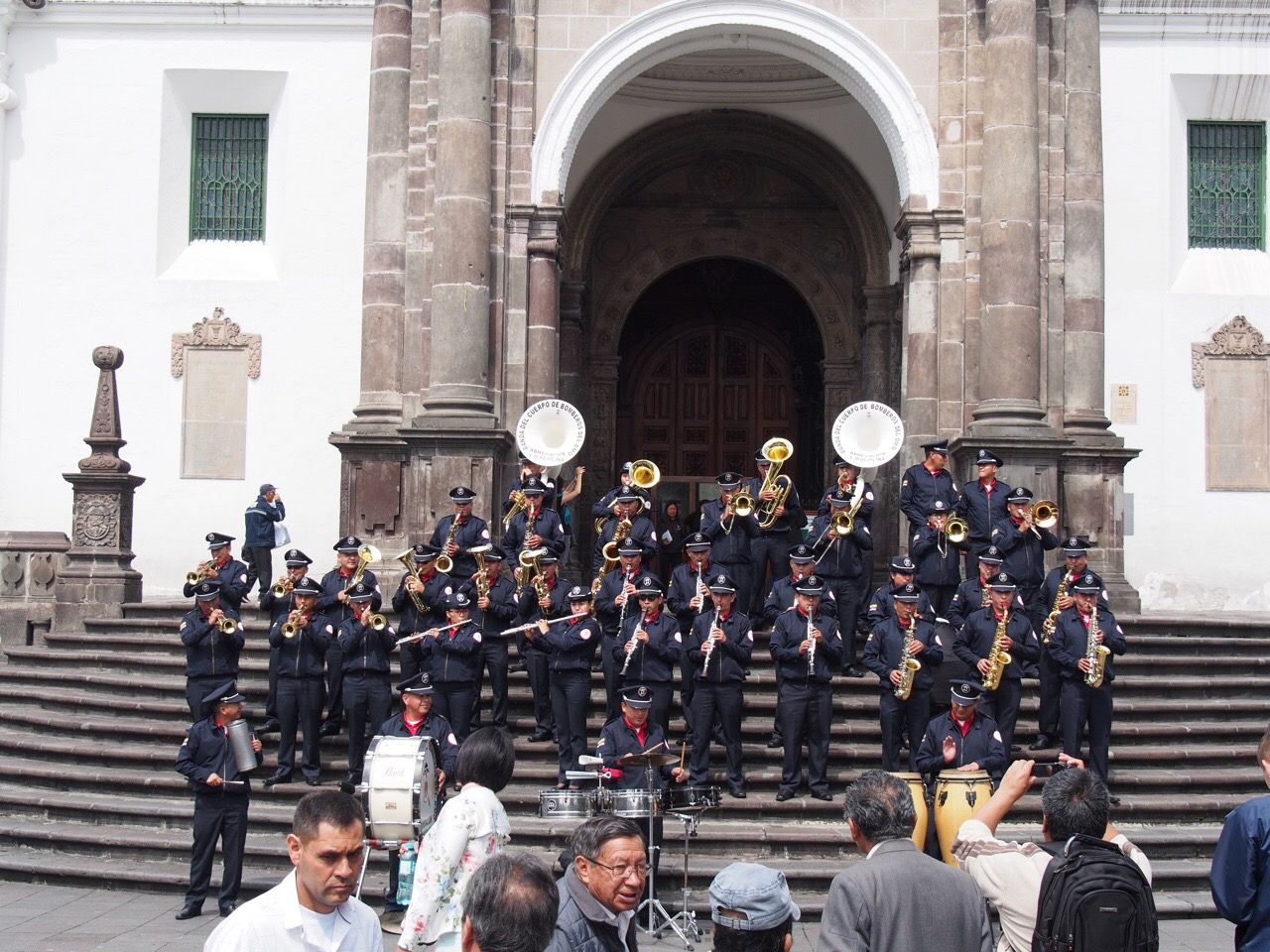 Just off the plaza is the Centro Cultural Metropolitano, once a Jesuit University, it now contains a library, lecture rooms, etc. Tomás showed us a large scale model of the colonial center, pointing out the squares and churches. 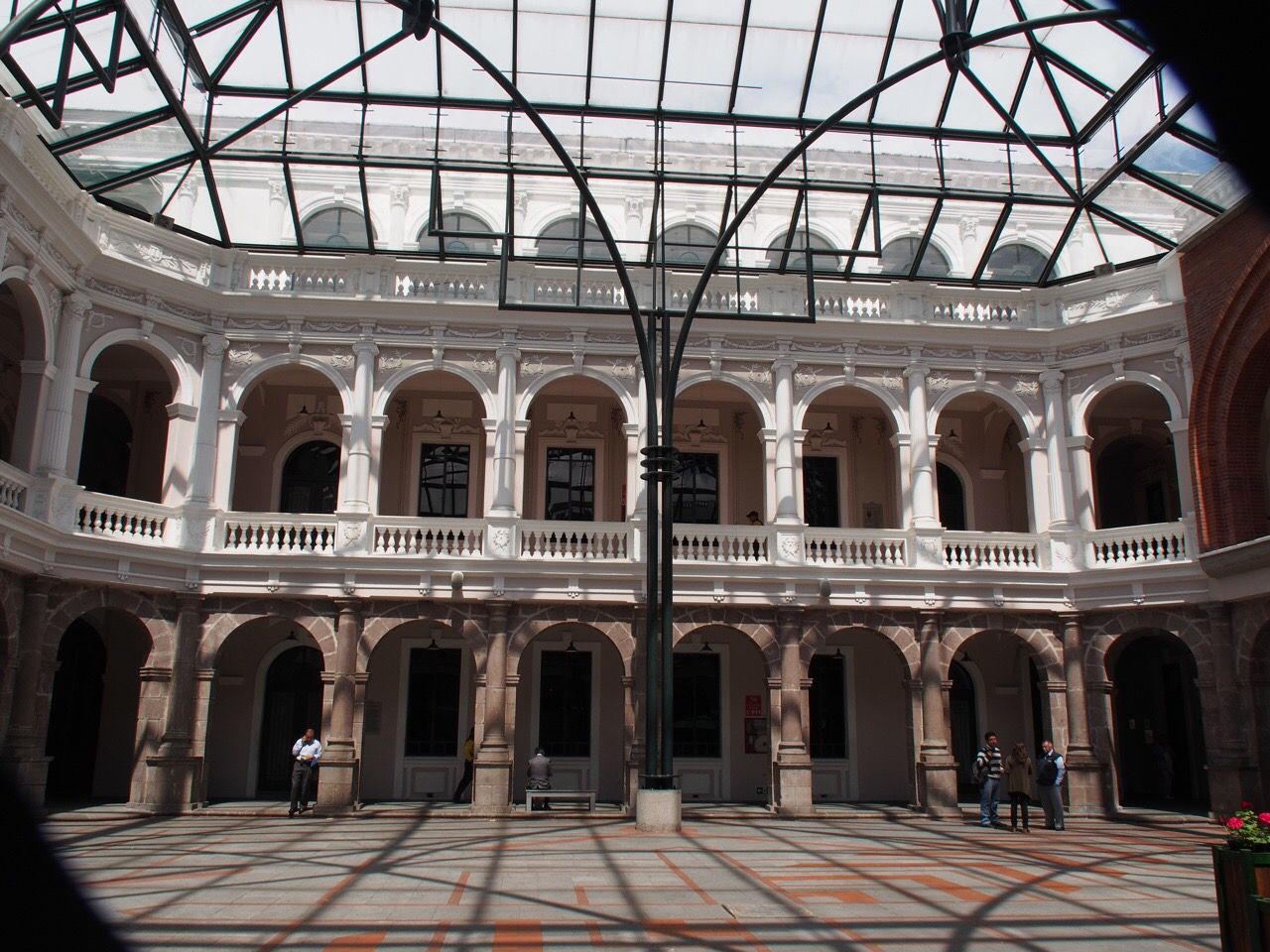 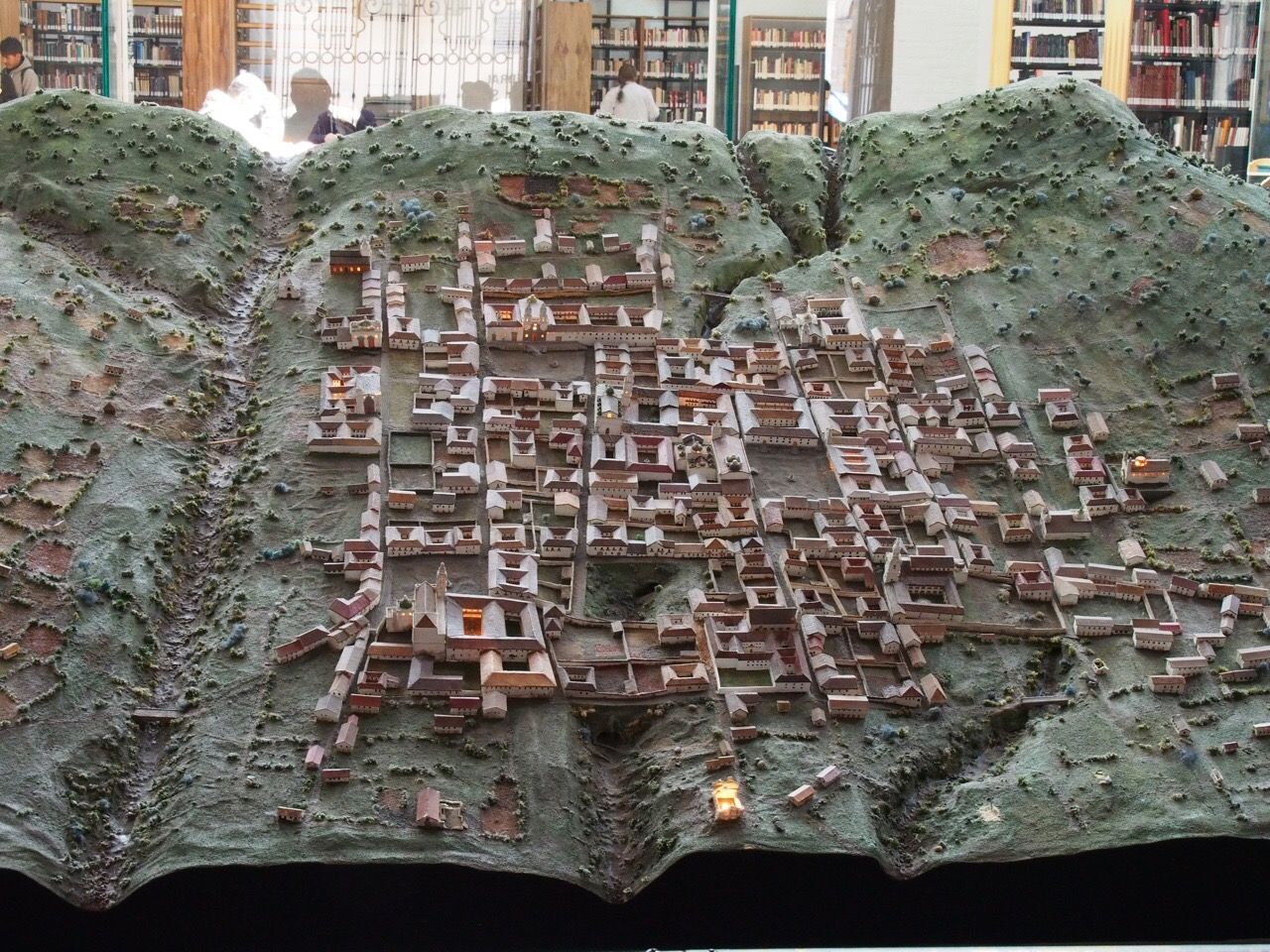 Also off the square is La Compañía de Jesús, the ornate gold-gilded Baroque-style Jesuit Church. Again, no pictures allowed. Construction began in 1605, but took 160 years to complete, once again with local artists trained in the European style. The King of Spain kicked out the Jesuits in the 1700s, angry that they were trying to educate the locals, and assigned other orders to maintain the building. The Jesuits returned after Ecuador’s independence, taking advantage of their money-raising and management skills. Among other aspects of the church, Tomás pointed out the altar area and columns, the columns duplicated on the exterior. He also pointed out the large Hell and Eternal Judgment painting, a 1879 reproduction of the 1620 original by Hermano Hernando de la Cruz.
We then walked to the Plaza San Francisco, the site of the Convent and Museum of San Francisco. We wandered for a while, some people going in the church, some hitting the museum gift shop. 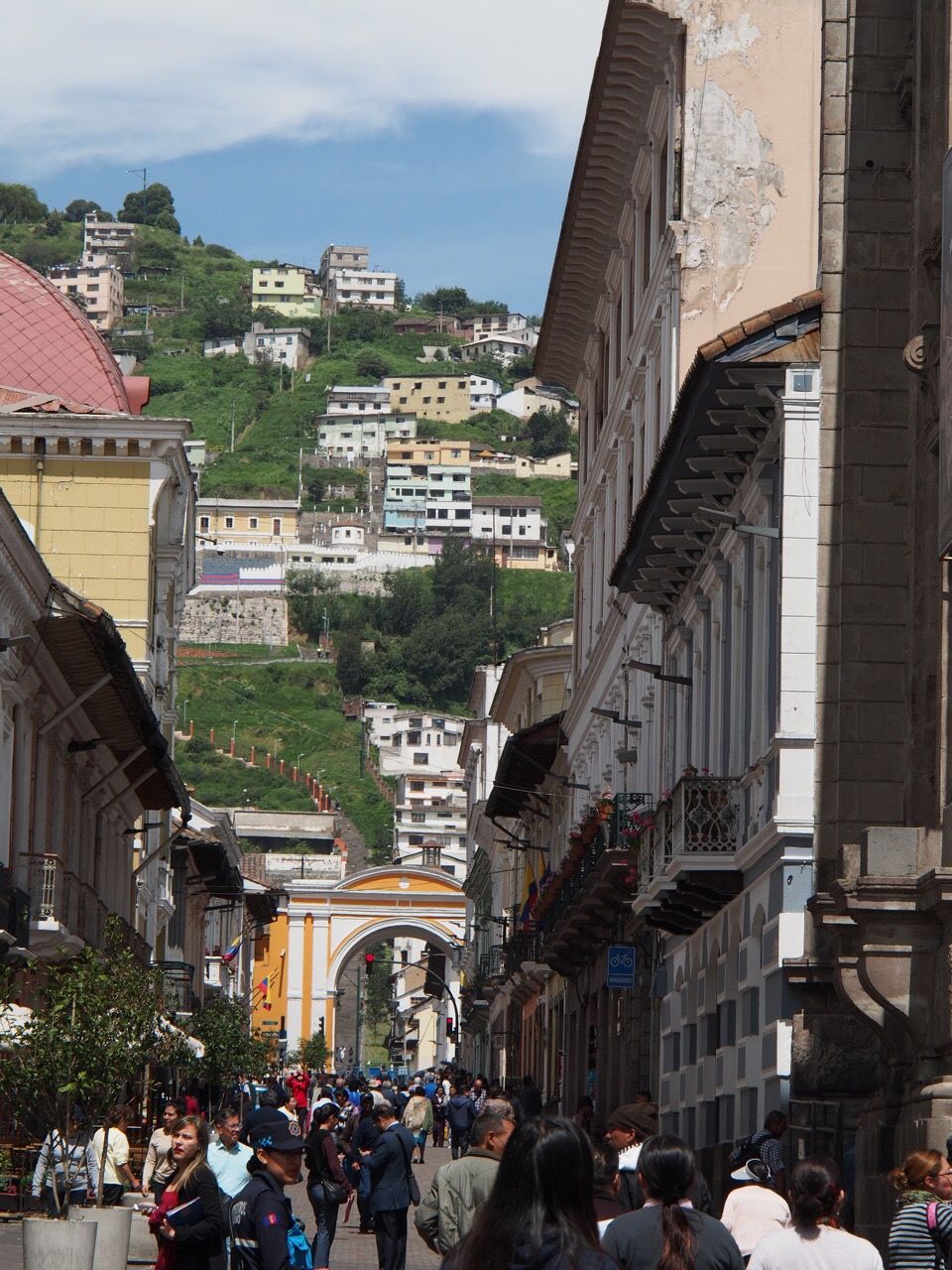 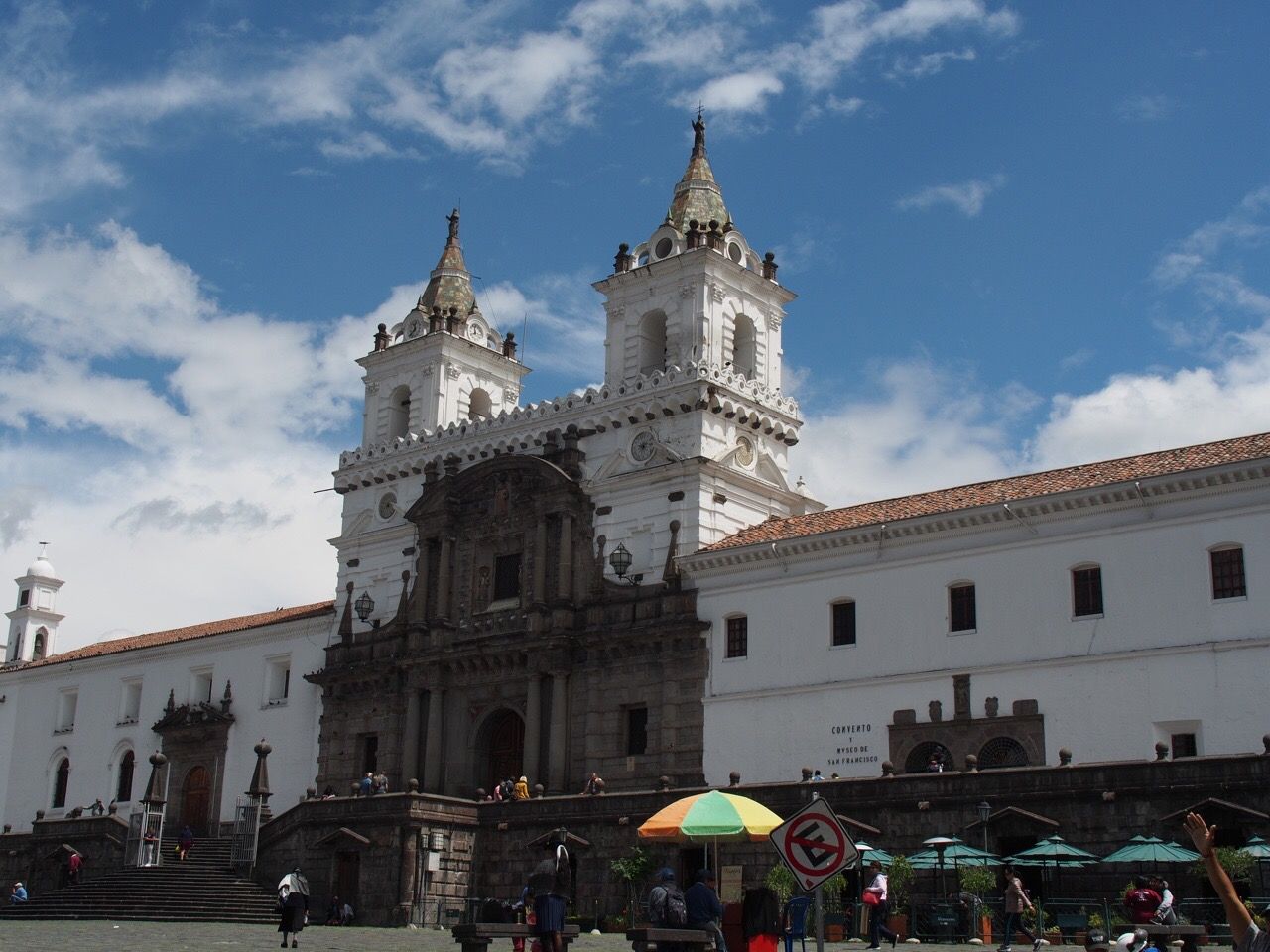 From the plaza, there was a good view of the "Virgin of El Panecillo", a Madonna made of seven thousand pieces of aluminum, inaugurated in 1976. 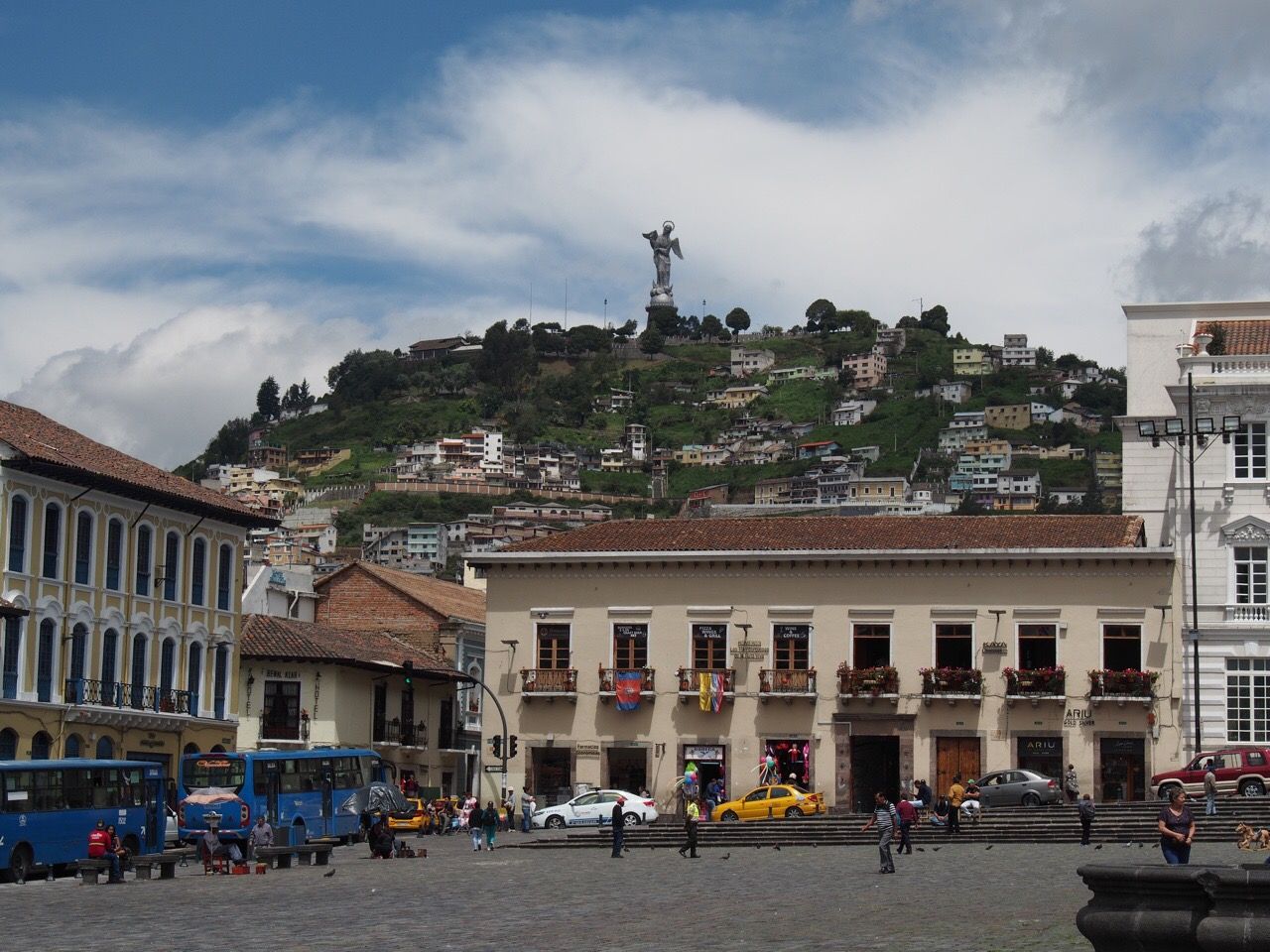 After getting picked up at the plaza, we drove (about 45 minutes) to just north of the equator to the El Crater restaurant, high above a crater of an extinct volcano, with farming in the interior. 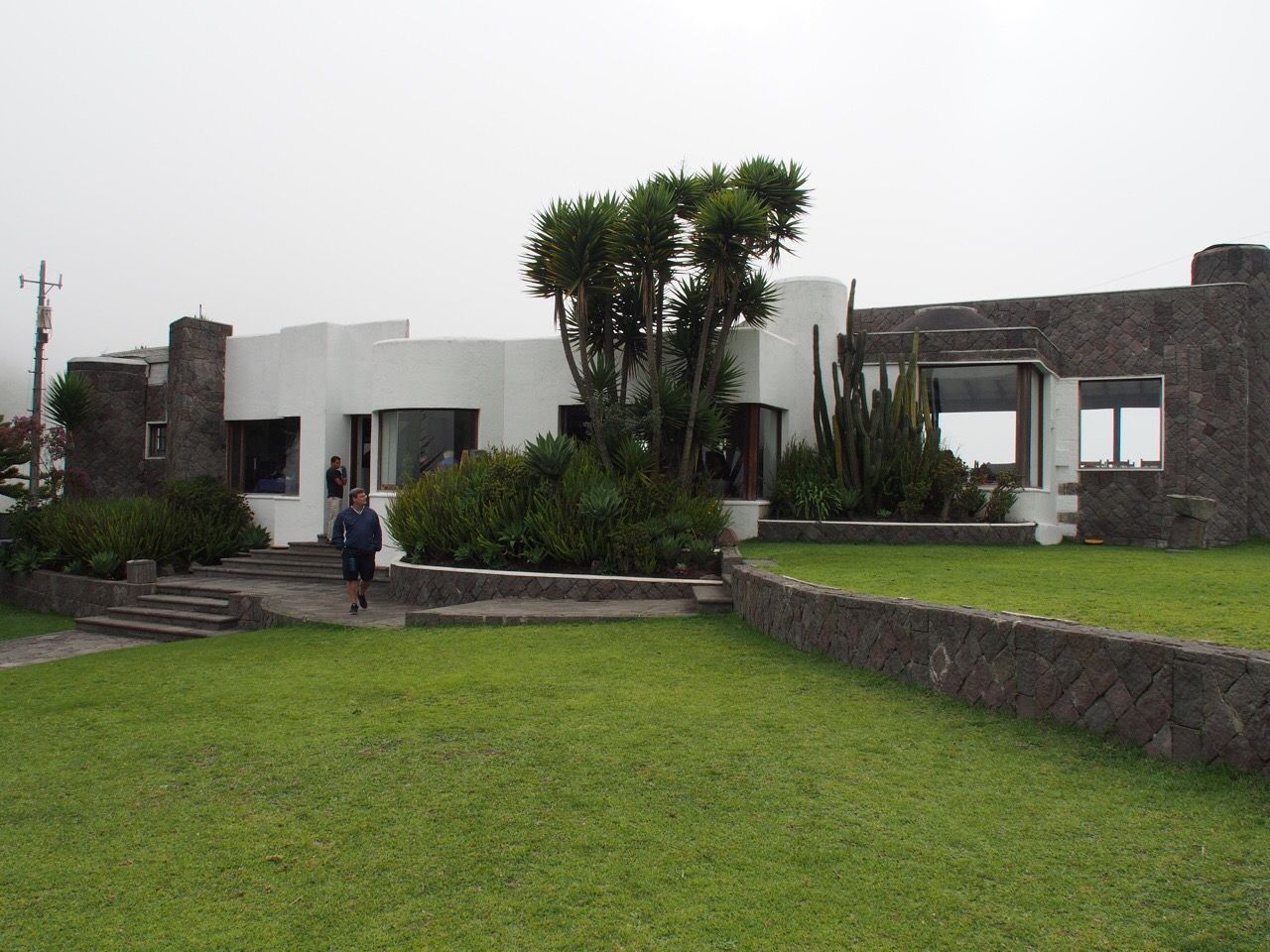 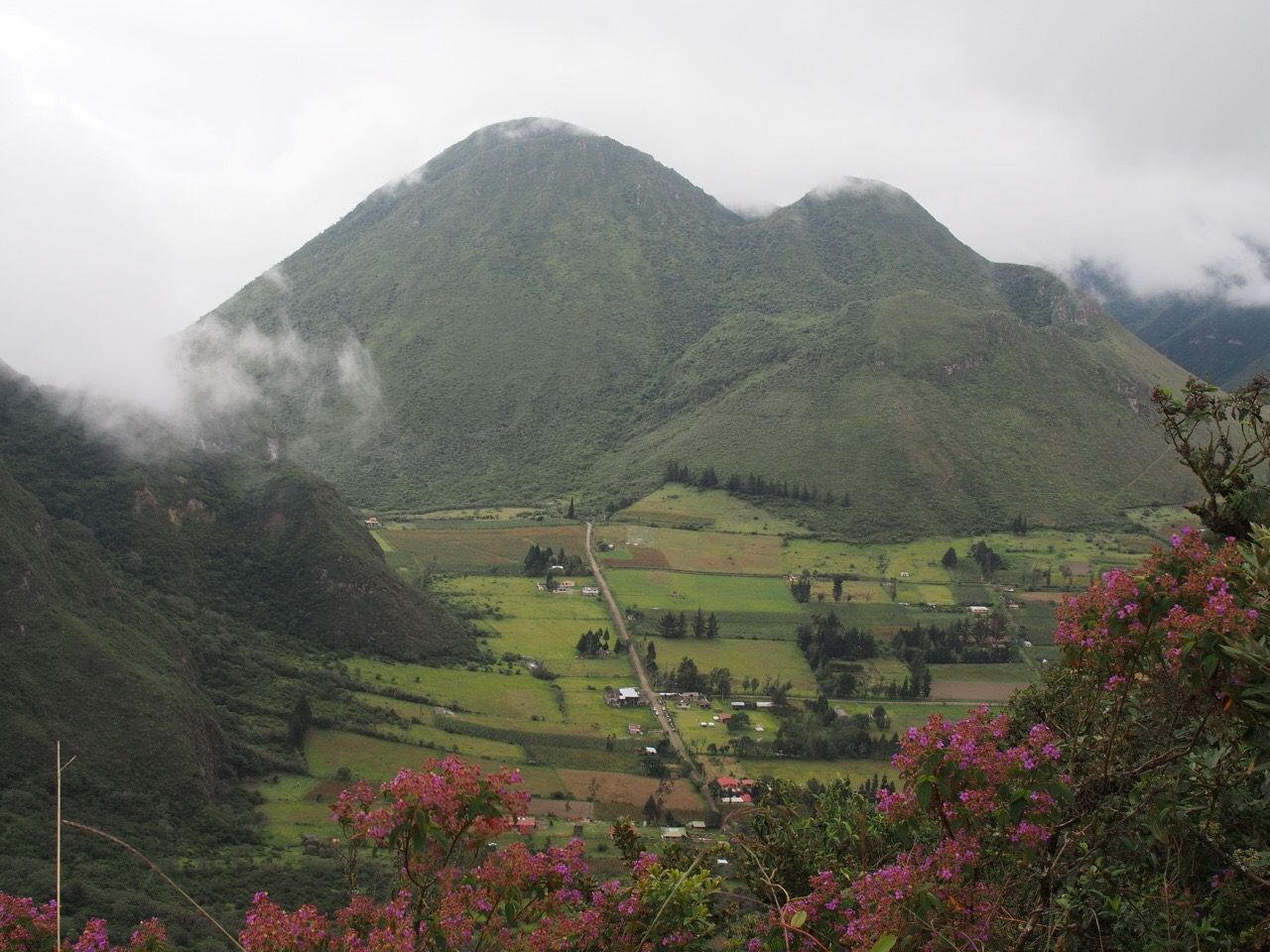 After an excellent lunch, we drove back down a short way to the Intiñan Solar Museum (note: Inti is the Quechua word for Sun).
The museum, all outdoors, with totems from various countries and a number of exhibits, was great fun. The original 18th century mark for the equator was only a couple of hundred feet off, with a number of activities at the equator line determined by modern GPS technology. Our guide balanced a raw egg on a nail, though we could not replicate the deed. We had a demonstration of the Coriolus effect, tried to walk the equator line with our eyes closed, and got pictures taken of us straddling to two hemispheres. It was not really real as the effects are so small, but it was fun. 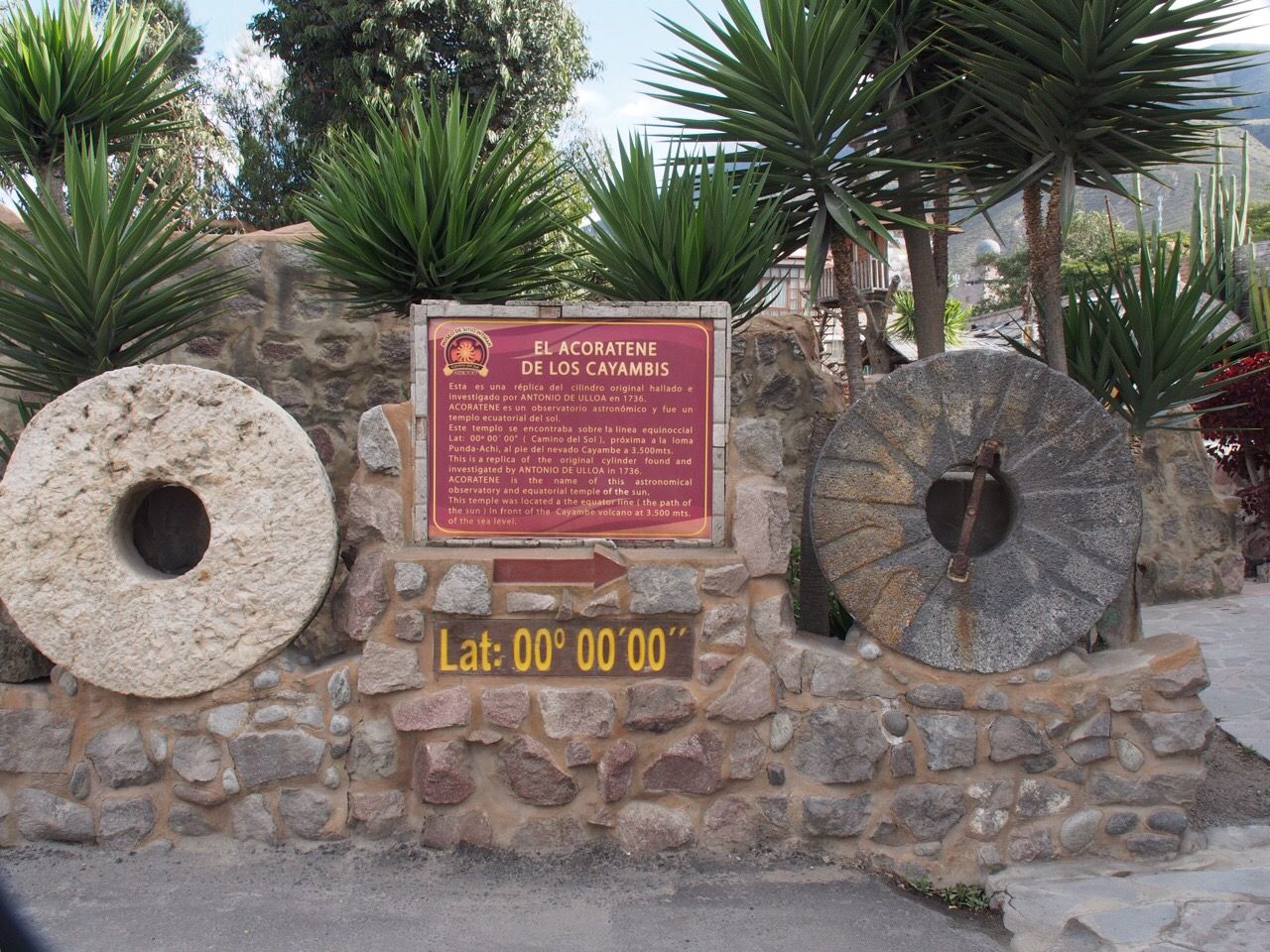 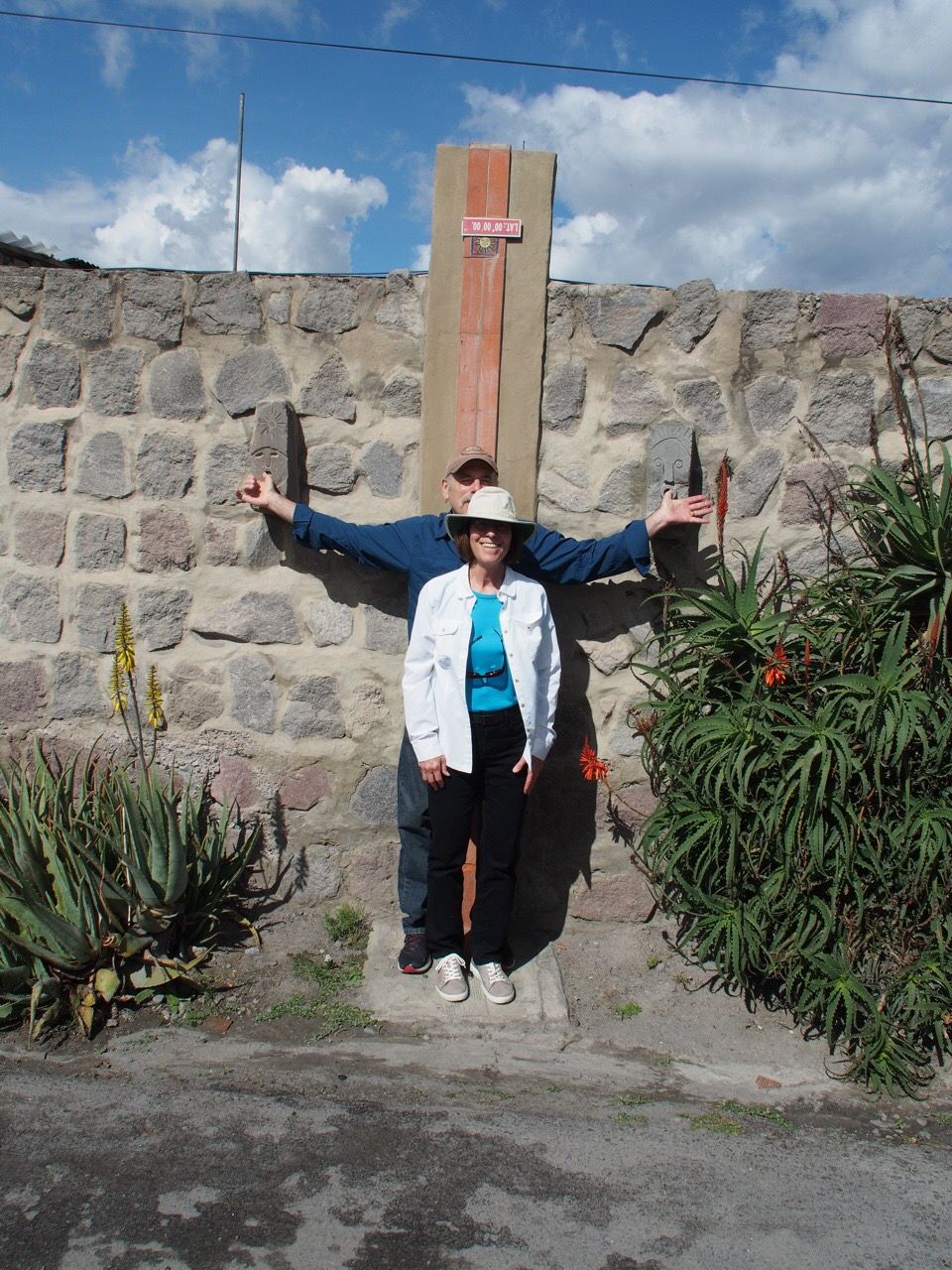 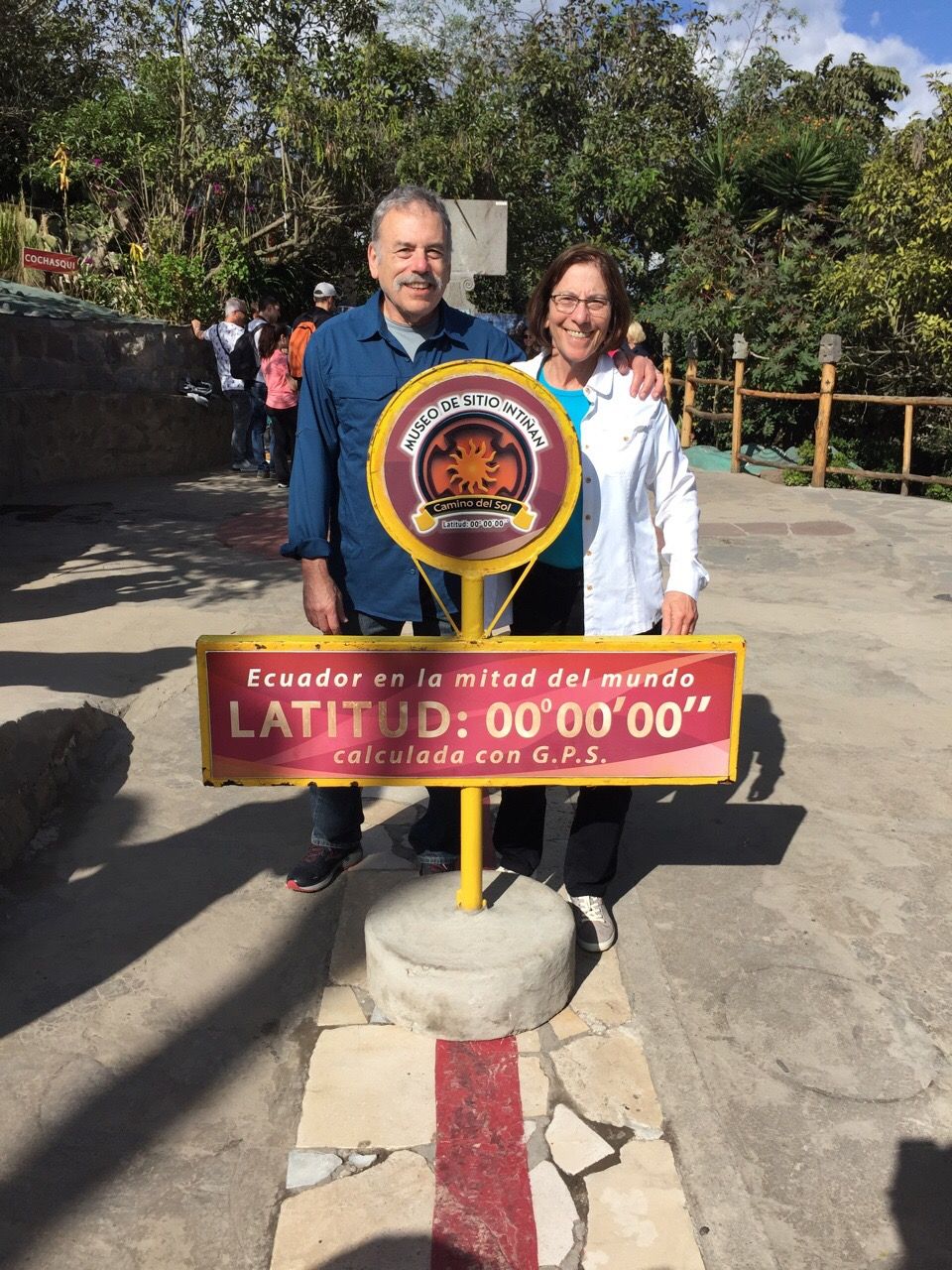 Great chocolate-making demonstration. Most of us bought Pacari chocolate bars – so good! 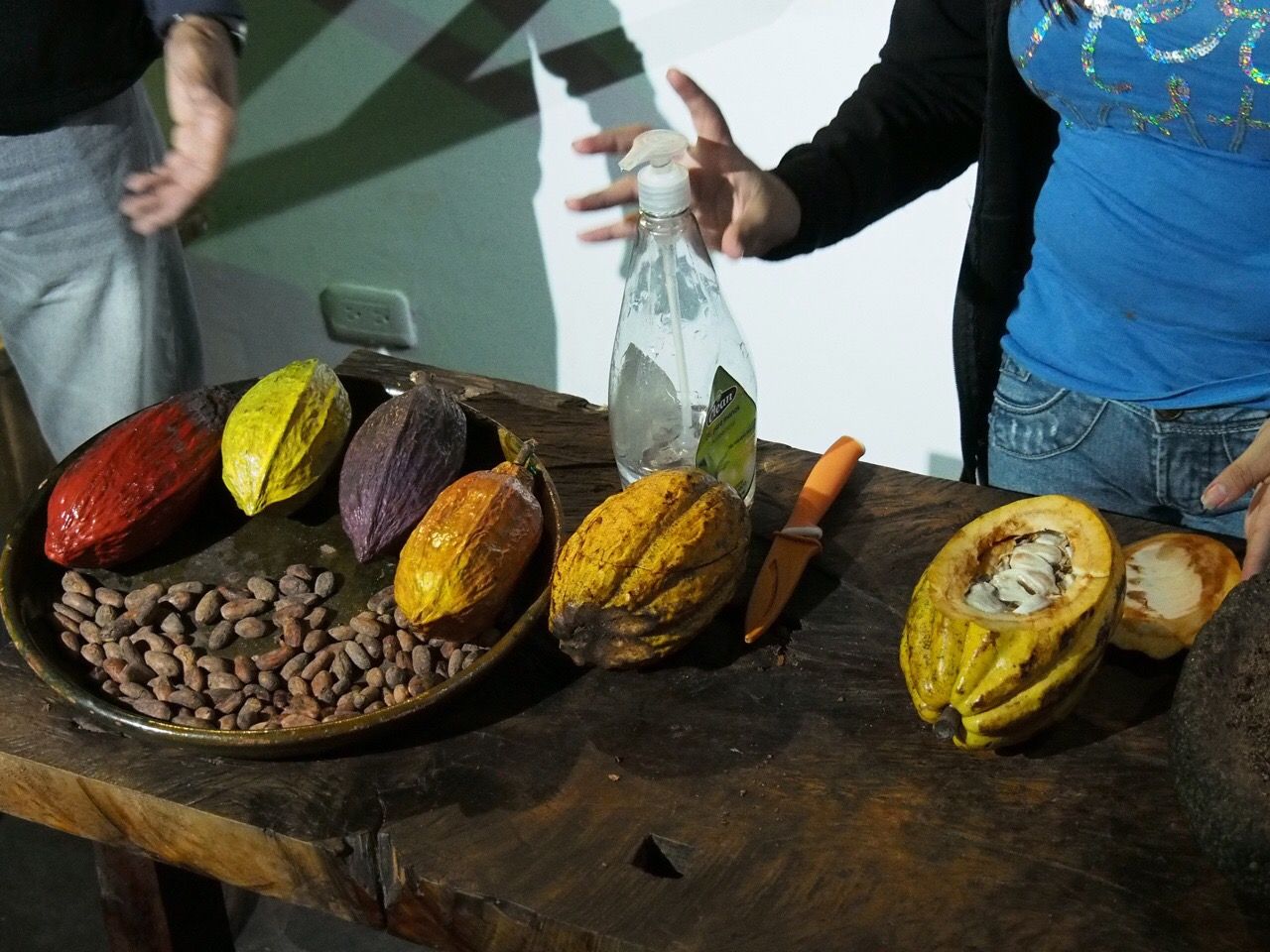 On return to the hotel, we walked with Jim a long way to get SIMs at a Claró store, the process of which once again much more difficult then it should have been. We grabbed a taxi, dropping us off at the close-by supermarket, Jim continuing to the hotel. We bought beer, Camembert, oranges, and a nice bread, eating back in our room, and then packing, showering, and turning in, with 4:30 am wake up call. 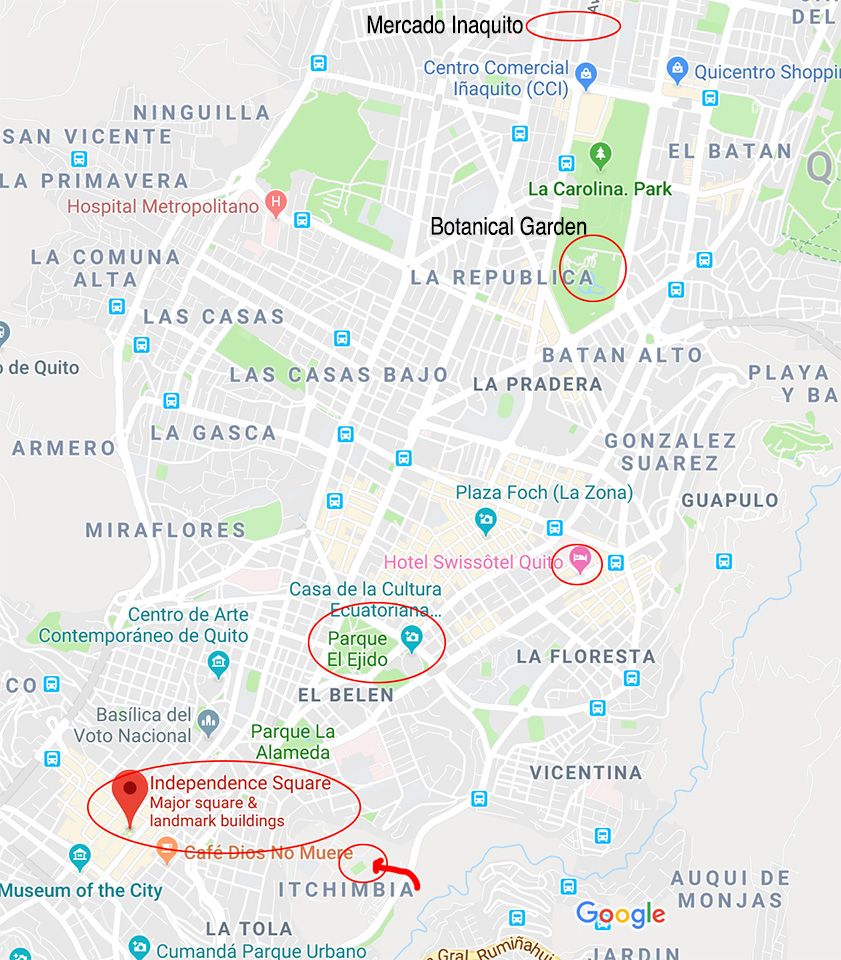 Published by Eileen and Larry Samberg on May 28th, 2019