Continuing with our 52 with a View list, we hiked up Jennings Peak in the Sandwich Range near Waterville Valley. Jennings Peak is actually the first stop to another mountain on the list, the higher Sandwich Dome. At 3980 feet Sandwich Dome is just a little shy of greatness. Another 20 feet of elevation and it would be a lot more heavily hiked. We only went as far as Jennings Peak, however. 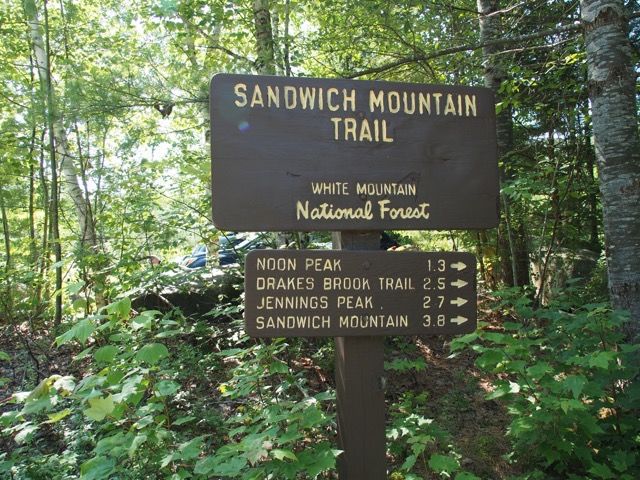 Note: This is an advanced intermediate hike. At six miles it is not overly long, but the hike up is steep (my threshold for a steep hike is a 20% grade — a thousand feet per mile — and this one got up to almost 24% in some sections), there is a tricky water crossing in each direction, and although the trail is usually obvious, it is not well blazed (there are yellow blazes but some of them are old and faded).
The trailhead for the Sandwich Mountain Trail is on the right (southeast) side NH Rt. 49 just a couple of miles before Waterville Valley ski area. Starting at an elevation of about 1425 feet, it immediately descends about 40 feet over about 0.1 miles to Drakes Brook. There are a a lot of rocks in the brook, but there is no “easy" crossing. After some thought we were able to jump from rock to rock to get to the other side. (Eileen needed encouragement and a hand from Larry.) 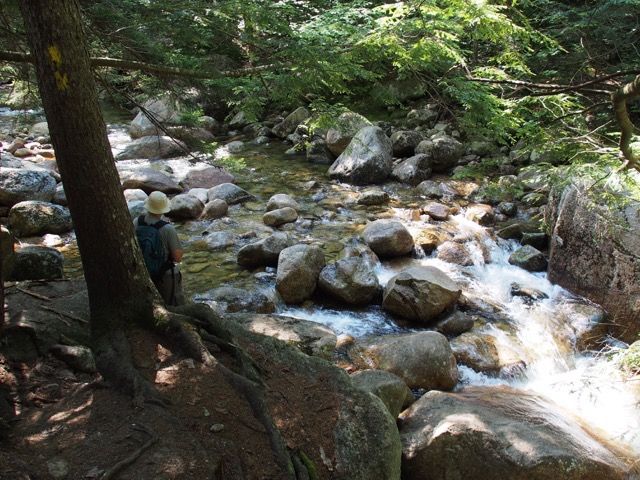 At this point the trail starts climbing moderately and then more steeply via switchbacks. It enters the Sandwich Range Wilderness at about .65 miles (1900 feet) and passes a big rock at about 1.2 miles (2435 feet). Note that at this point the trail has climbed about 1000 feet in about 1.1 miles from the brook crossing). The trail itself isn’t that interesting. It has clearly had a fair amount of foot traffic, but has not been worn like the more popular trails. 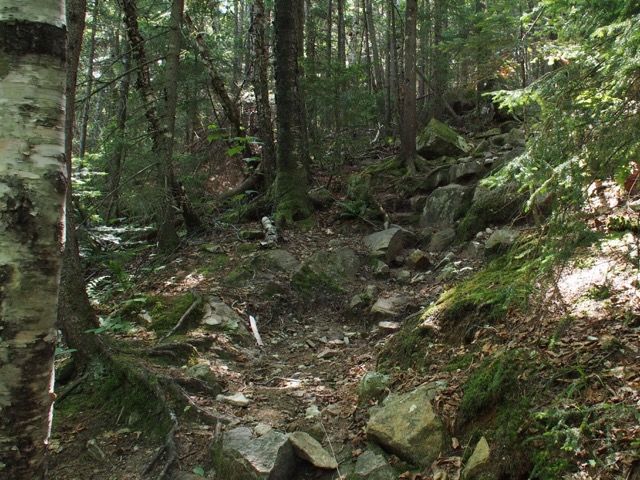 The trail flattened out for a short stretch. 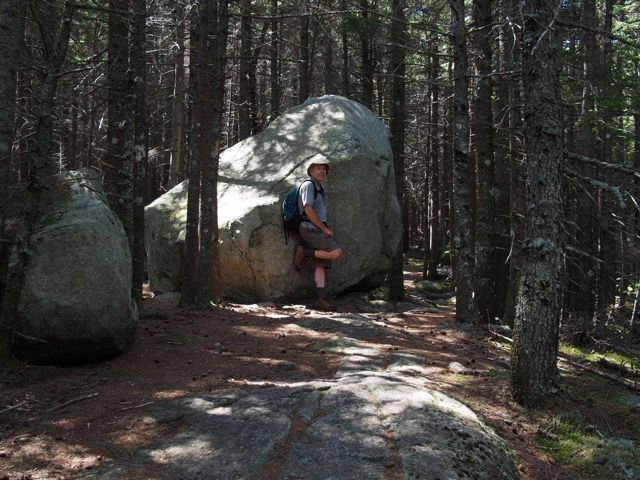 After the big rock it begins to climb more steeply to the summit of Noon Peak. 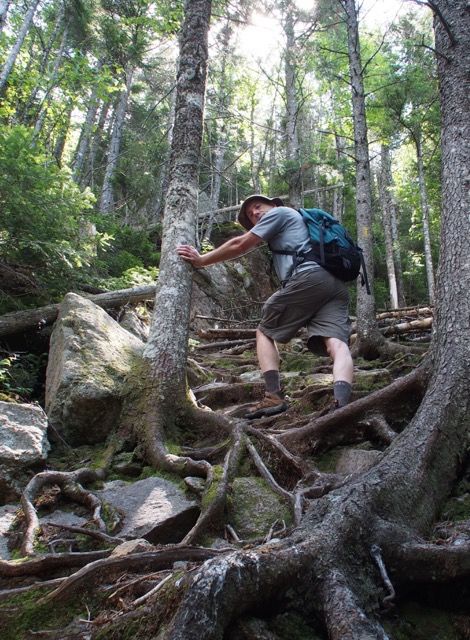 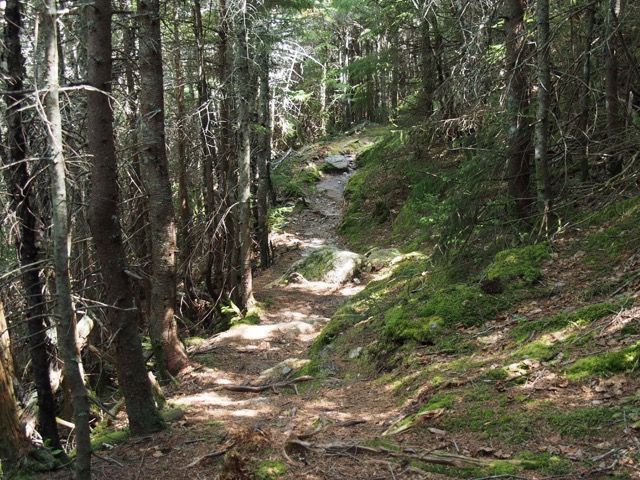 There is a nice viewpoint (at 1.5 miles and 2860 feet) just before Noon Peak. The viewpoint looks northeast and provides views of the Tripyramids and Mt. Osceola in the foreground. In the gap between them looking over Mad River notch you can see Mt. Washington in the distance.
Tripyramids 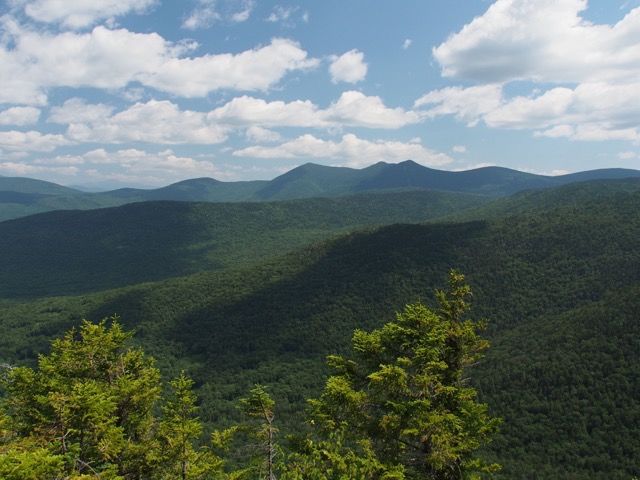 Mt Washington in the distance. 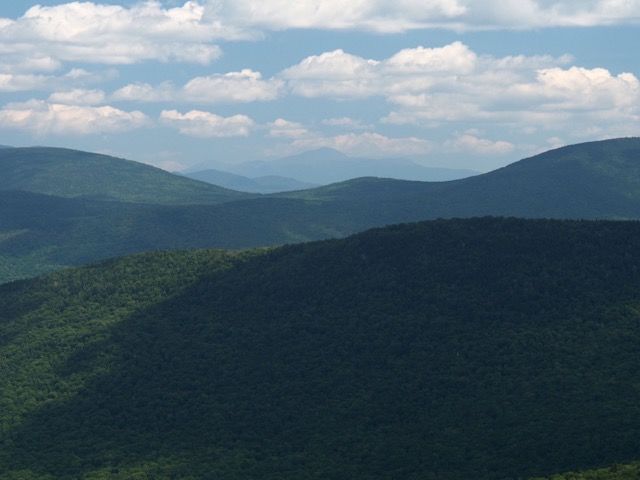 Looking through Mad River Notch (between East Osceola and Mt. Kancamagus). The cliffs of West Huntington are seen beyond the notch. 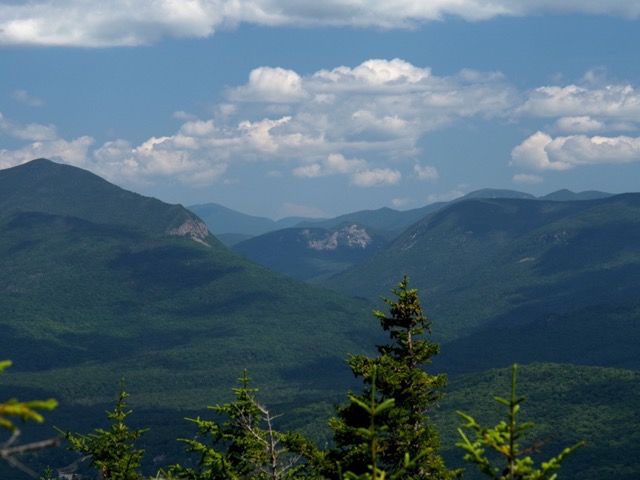 After a relaxing break, we headed out again. Noon Peak itself has an official elevation of 2976 but the trail doesn’t actually go over the peak other than some ledges so after the viewpoint we realized that we were beyond the peak because we started descending into the col between Noon Peak and Jennings peak. The col was mild with periodic views of both Jennings Peak and Sandwich Dome. It meandered down for a while with occasional ups, then started up with occasional downs. 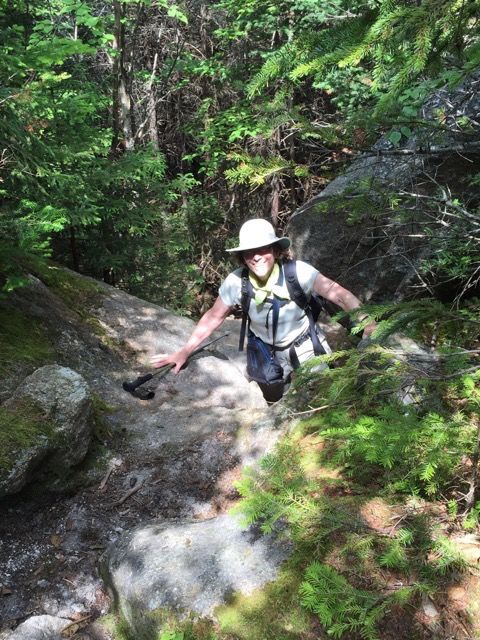 Jennings Peak on the right. 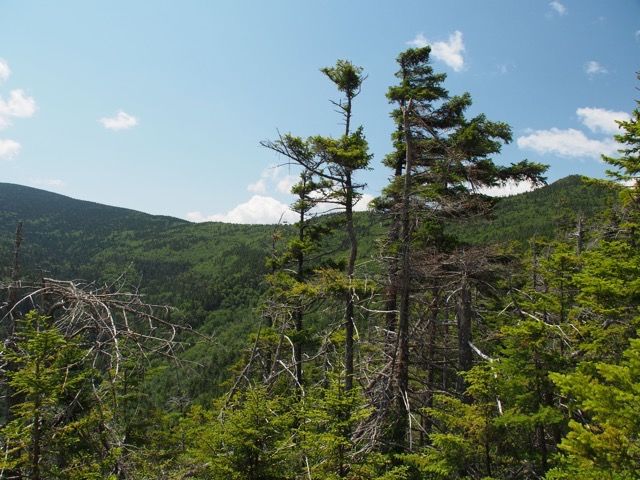 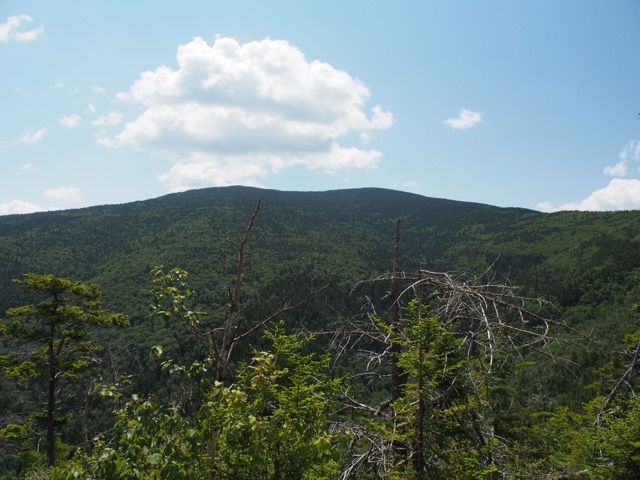 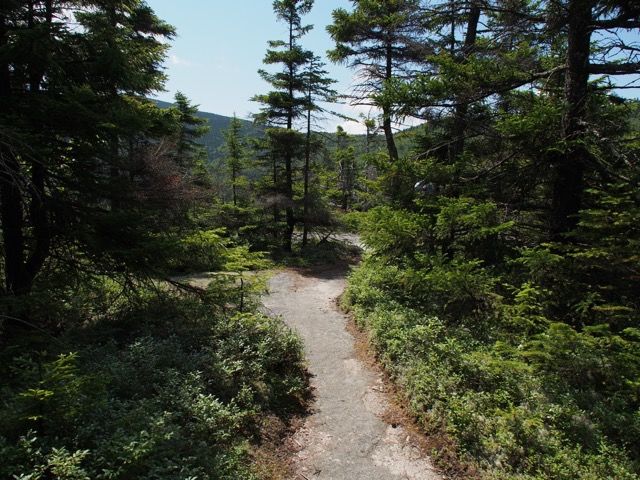 As we approached the steep peak of Jennings it got steeper. The trail met the Drakes Brook Trail at about 2.5 miles at an elevation of 3235 feet. After the junction, the Sandwich Mountain Trail continues. 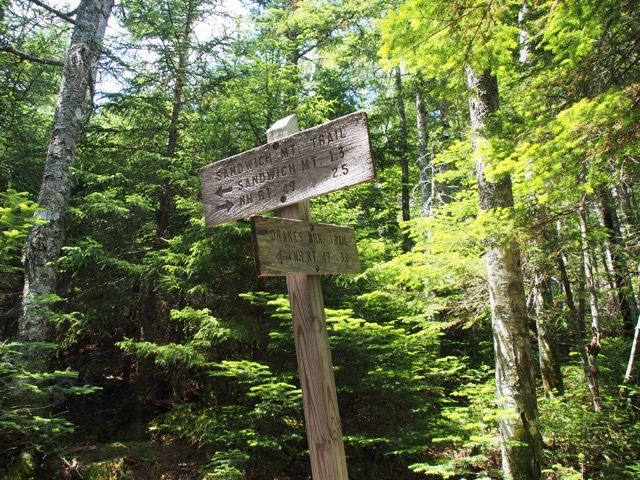 After another tenth of a mile the spur up Jennings Peak leaves to the right and climbs another .2 miles to the peak. (We actually missed the spur — there was a tree down across the path and we were focused on climbing over the tree so we didn’t notice the spur off to the right. There was a sign on a tree but it was pretty high and facing in the other direction. So we ended up walking another couple of tenths before we decided we missed it and turned around). Jennings Peak was reached at about 2.9 miles.
The Sandwich Mountain Trail, looking at the picture, is to the left of Larry and the tree he is standing besides. The Jennings Peak spur is to the the right of Larry (on his cell phone side — his mom happened to call and we had service). 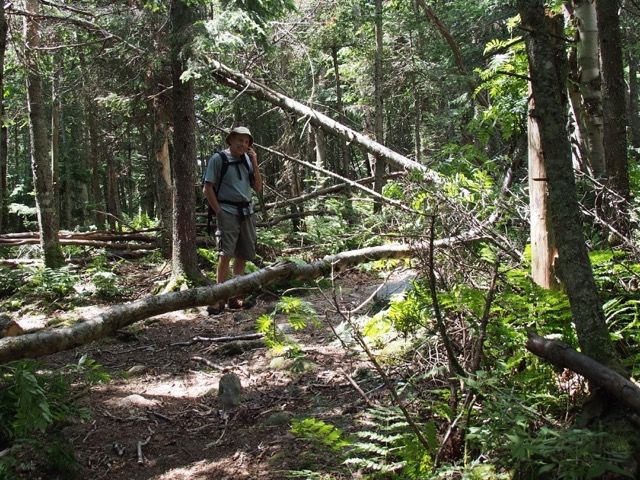 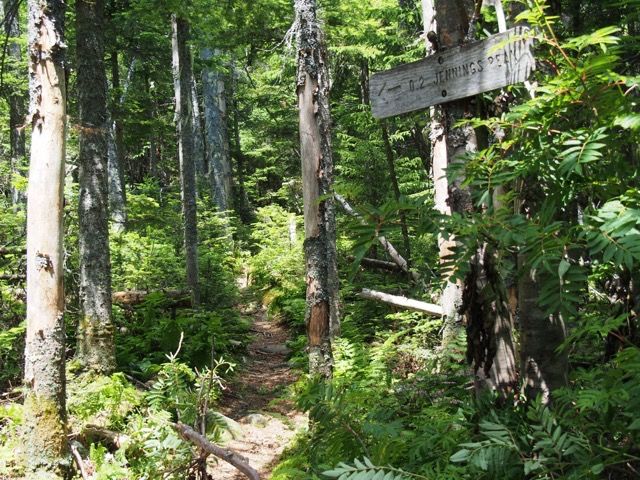 The summit of Jennings Peak (official elevation of 3440 feet) provided good views to the south with Sandwich Dome filling most of the view. 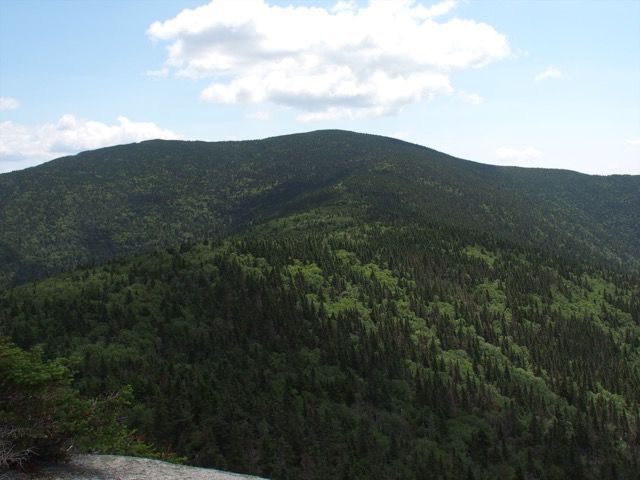 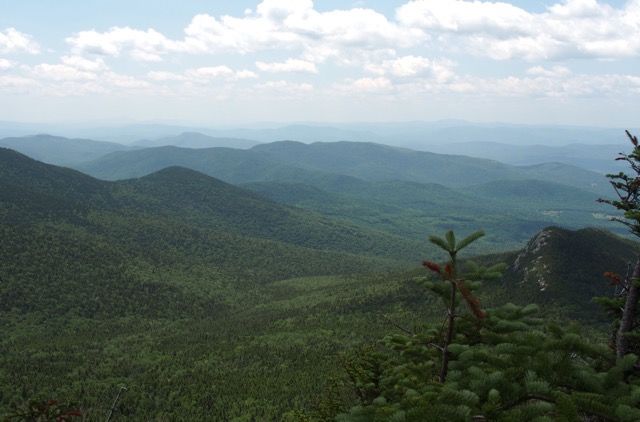 On the way back, we went down the Drakes Brook Trail (we passed the junction on the way up a few tenths of a mile before Jennings) so that the hike was a loop. The Drakes Brook Trail is 0.5 - 0.7 miles longer, slabbing in an arc north and east of Noon Peak, but after a steep descent from the top down to Drakes Brook over the first three quarters of a mile or so (just a guess), the trail flattens out and follows the brook (sometimes right at the brook and sometimes moving away a bit). This was an easy and pleasant walk down with occasional pretty intersections with the brook. There were a few trees across the trail that needed to be climbed over and one area where the trail had been washed out a few years ago that required a little care. 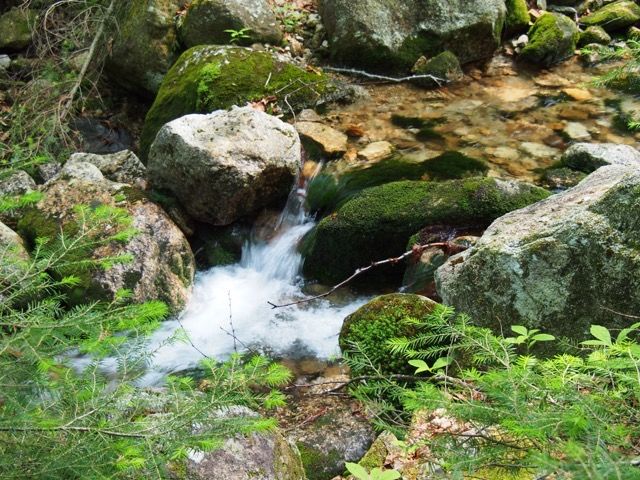 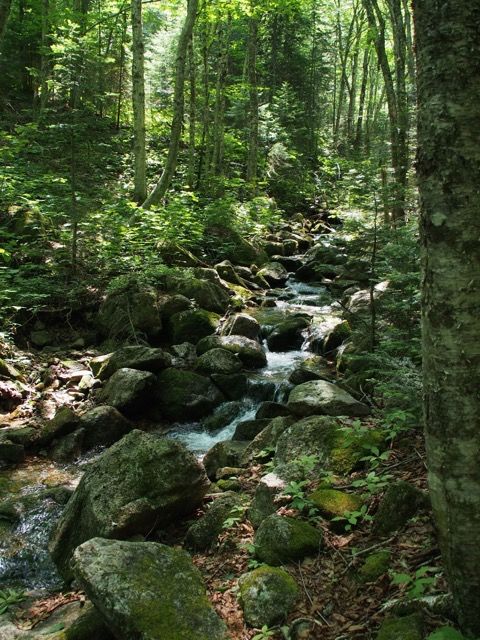 Eventually we got back down and had to cross over Drakes Brook (a bit upstream from the crossing we did on the way up). The brook was wider here. Larry found some rocks that he could hop across, but Eileen decided to just wade across in her bare feet. 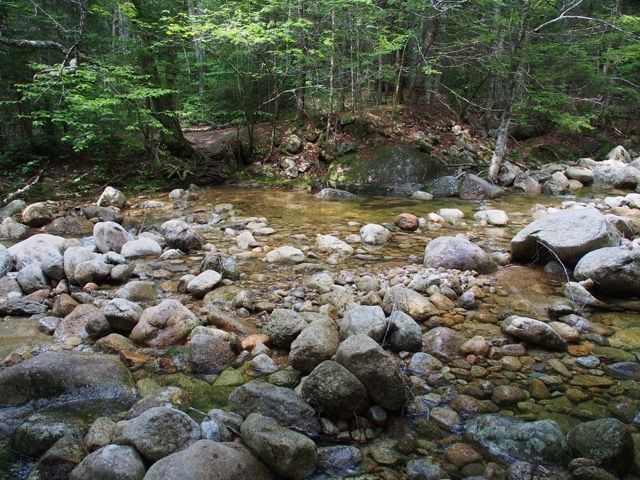 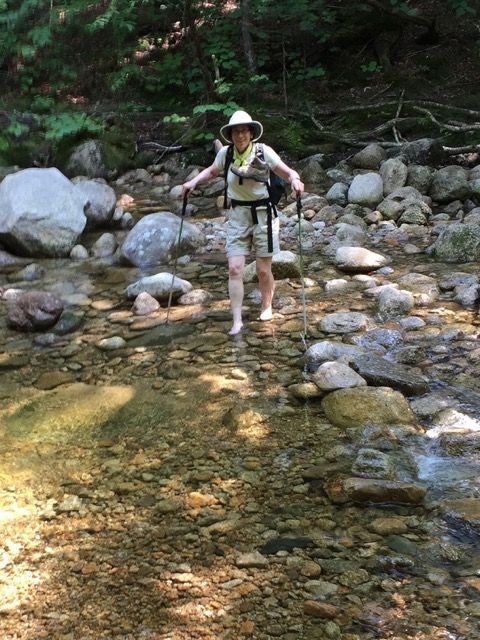 After the brook crossing it was just a couple of tenths back to the parking area. In the following diagram, the start (and end) are at the top, Noon peak is near the center and Jennings Peak is near the bottom. 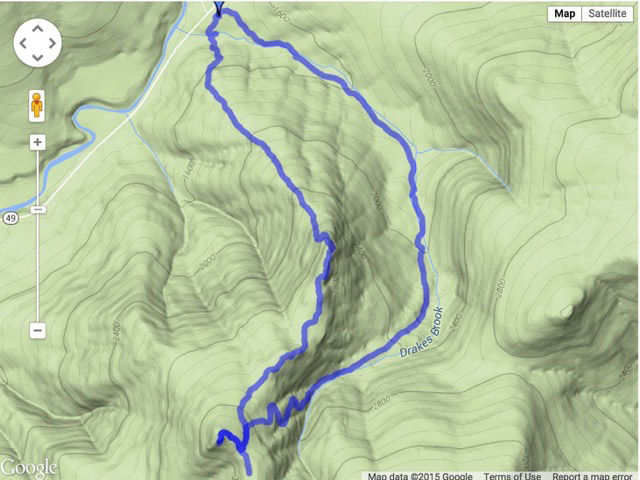 Published by Eileen and Larry Samberg on July 11th, 2015