Always looking for a new place to hike, we decided to hike the Mount Morgan and Mount Percival loop north of Squam lake.
As it turns out, the person who maintains the NH 52 with a View list had recently retired 5 mountains from the list and added 5 new ones. Mt. Morgan and Mt. Percival are in the new five. So a win on both counts!
We headed out early and got the last spot in the small parking lot off of Route 113 in Holderness at about 8:30 am on a Saturday. The parking lot held about a dozen cars.
The hike was 5.2 miles, with 1500 ft elevation, 4 ½ hours, including 1 hour stop time total at 4 stops. The trails were well-blazed with yellow paint and yellow triangles. Thanks SLA (Squam Lake Association).
We headed along the Mount Morgan Trail, listed as 2.1 miles to the summit. The Morse trail diverged right at .1 miles in (leading .5 miles to the Mount Percival Trail), part of our loop back. 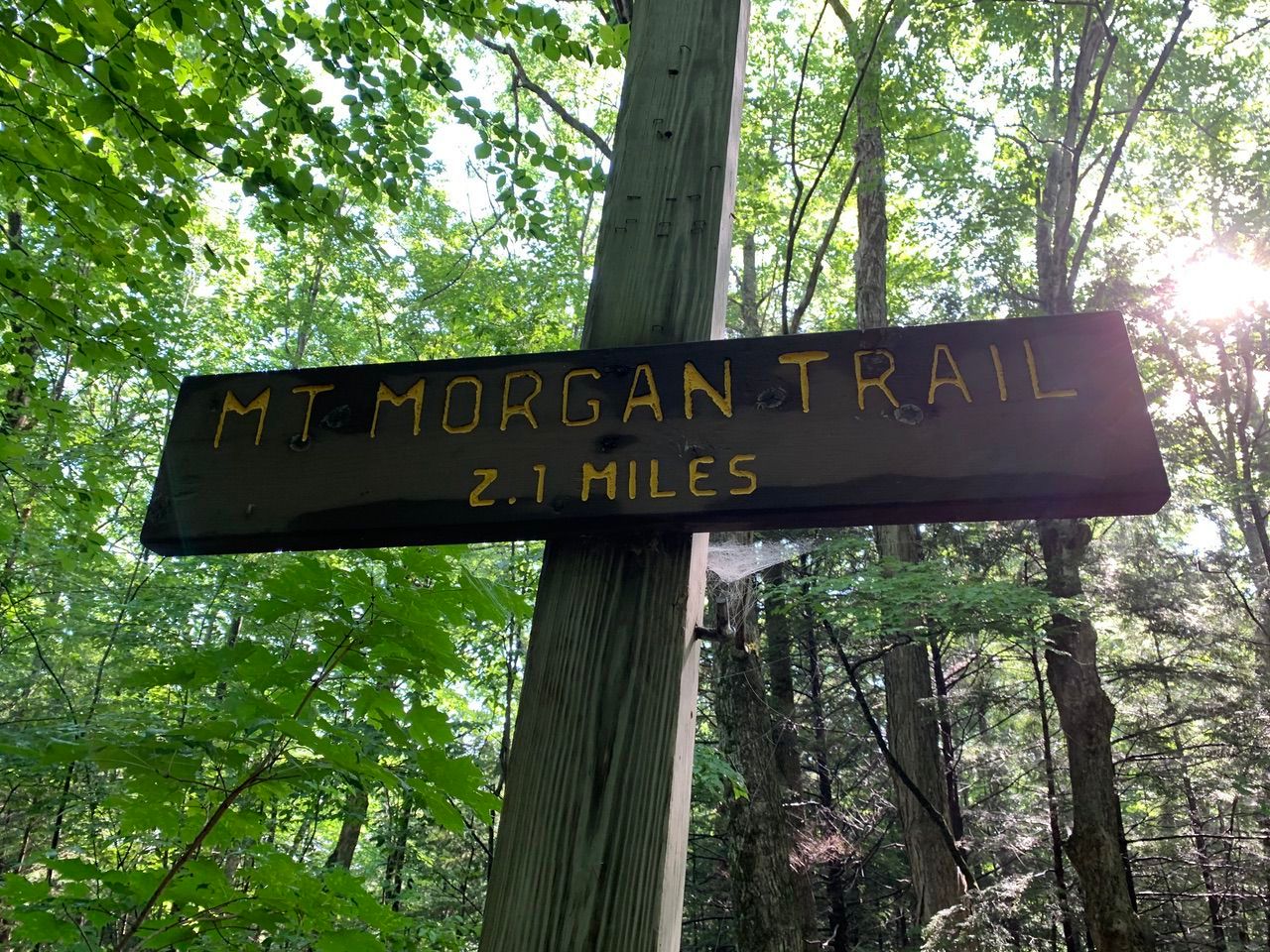 At first there was an easy to moderate grade, soft footing, until 1.4 miles, where the trail began the steeper ascent of the southeast slope. 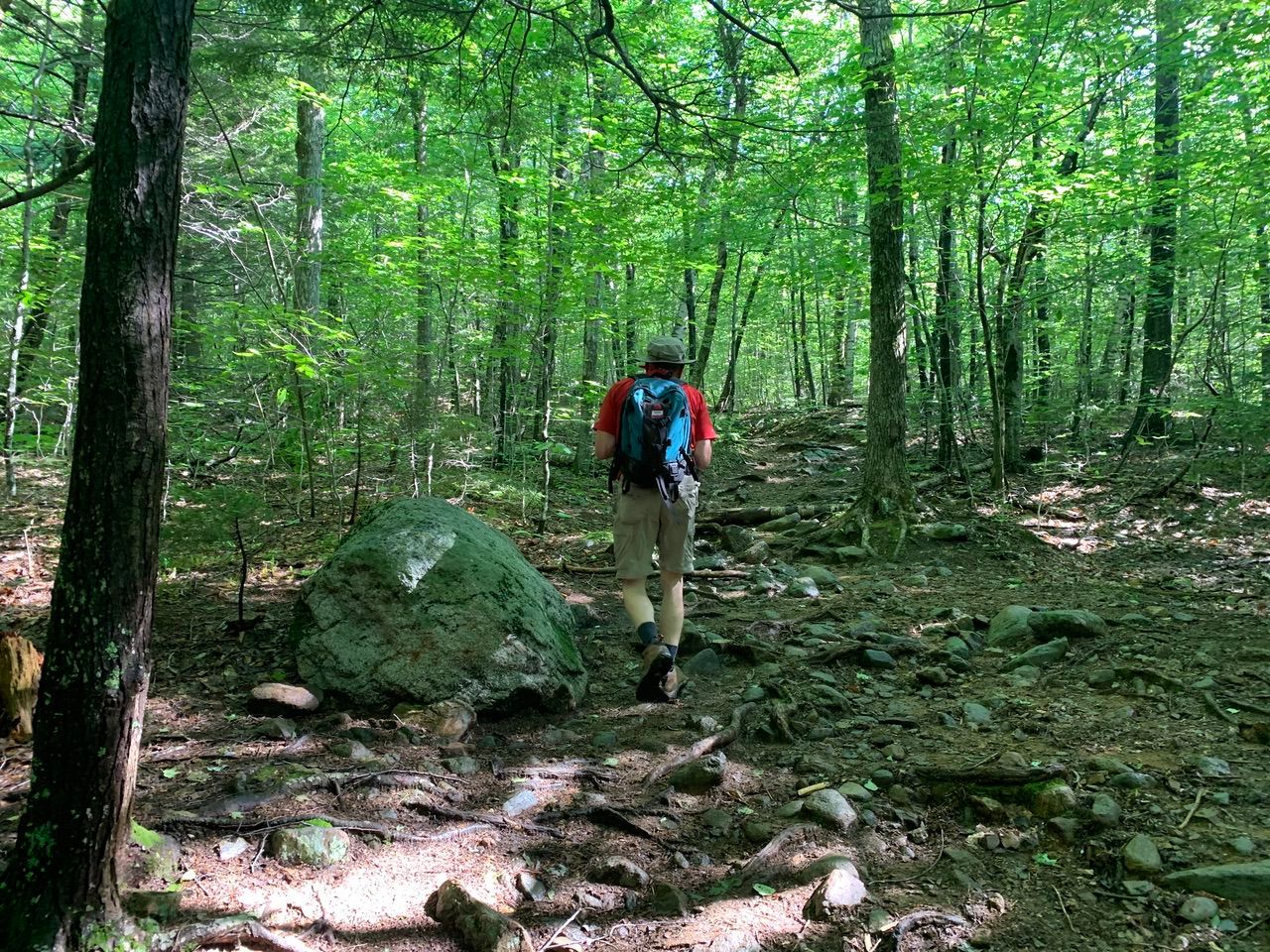 At 1.7 miles, Crawford-Ridgepole Trail entered from the left to merge with the Mount Morgan Trail. 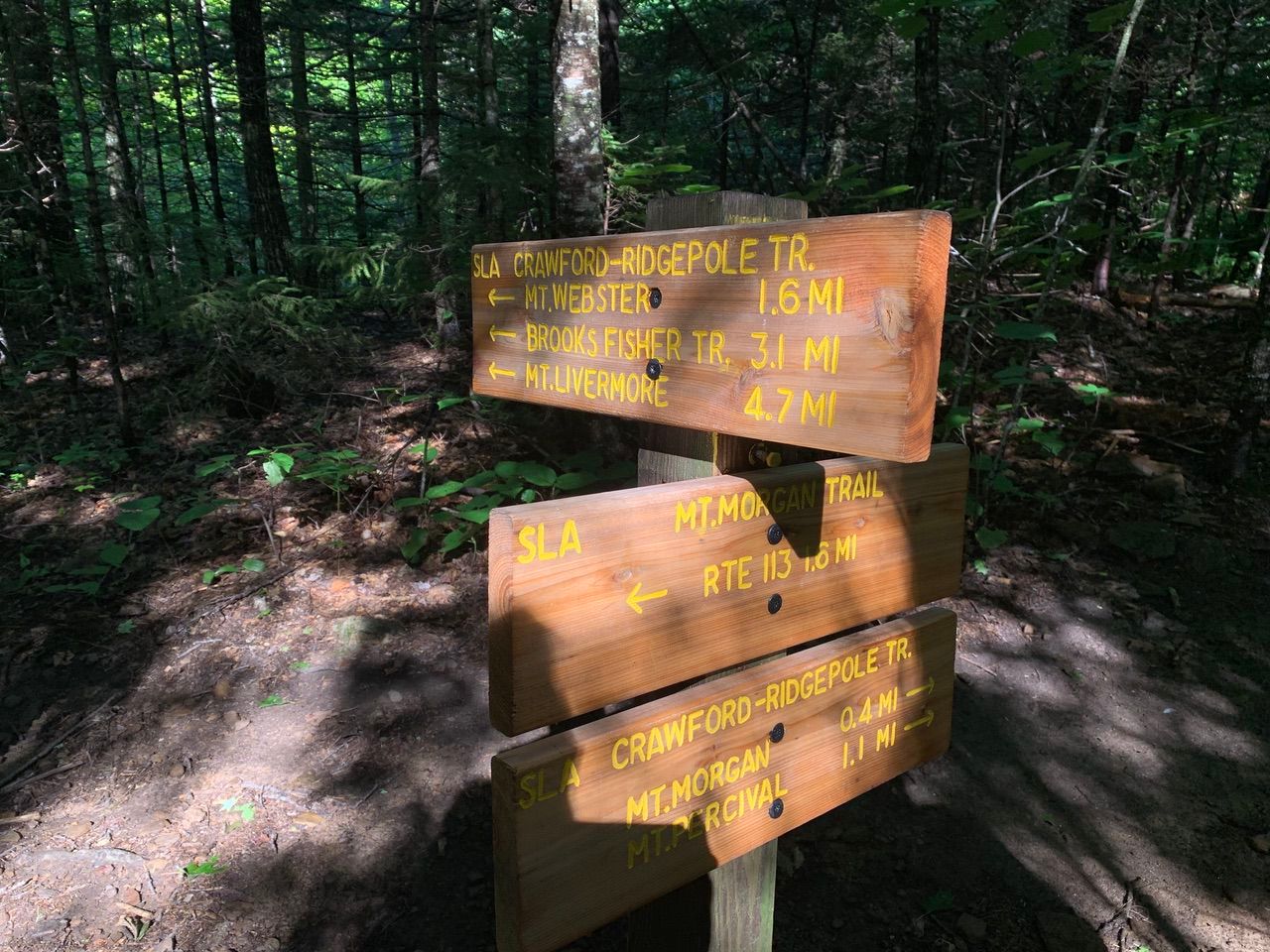 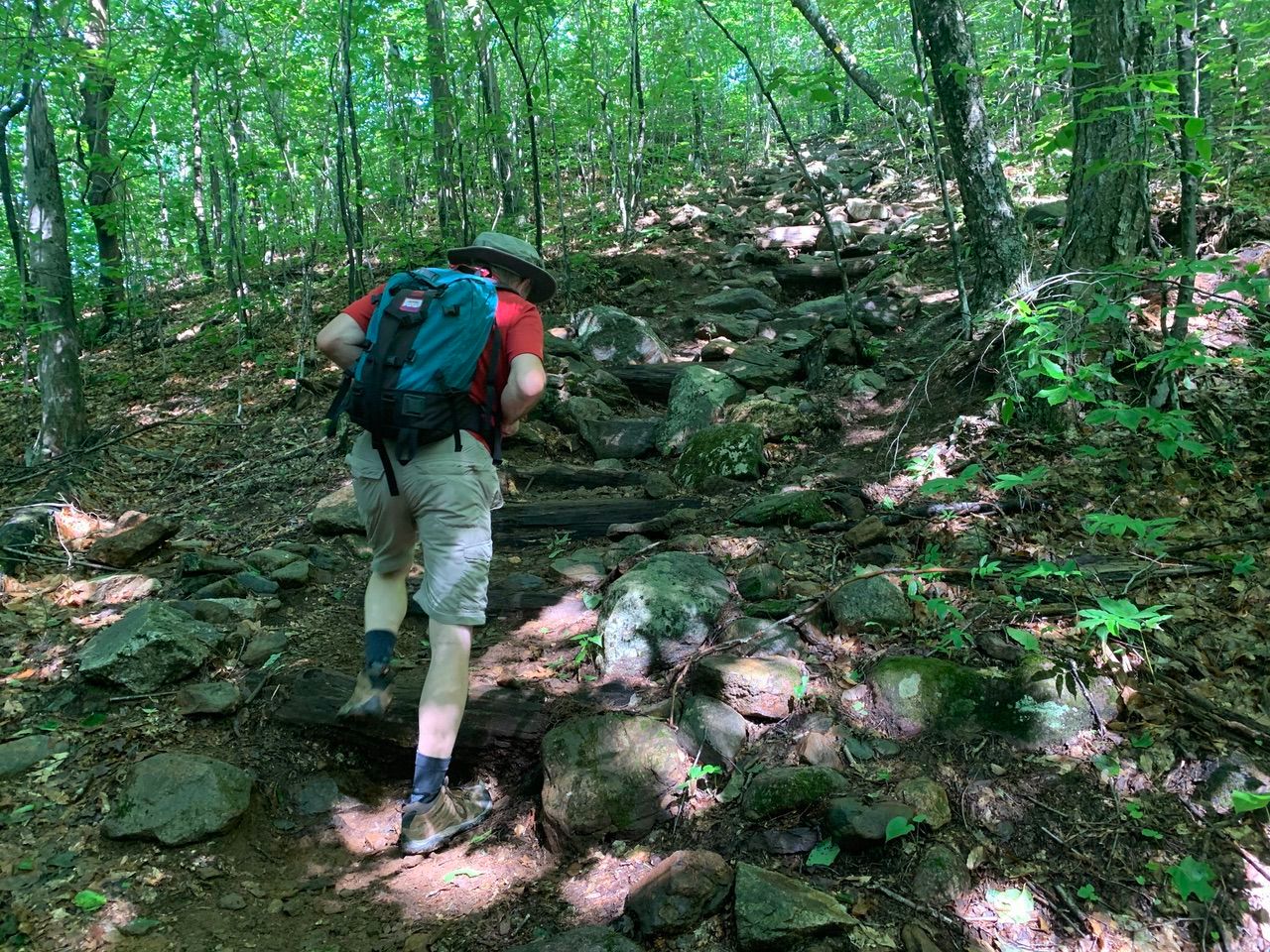 There are two ways to the viewpoint near the summit of Mount Morgan — one is via ladders and significant rock scrambling, and one by following the trail a little further and taking another route up. We decided to challenge ourselves with the ladder route. 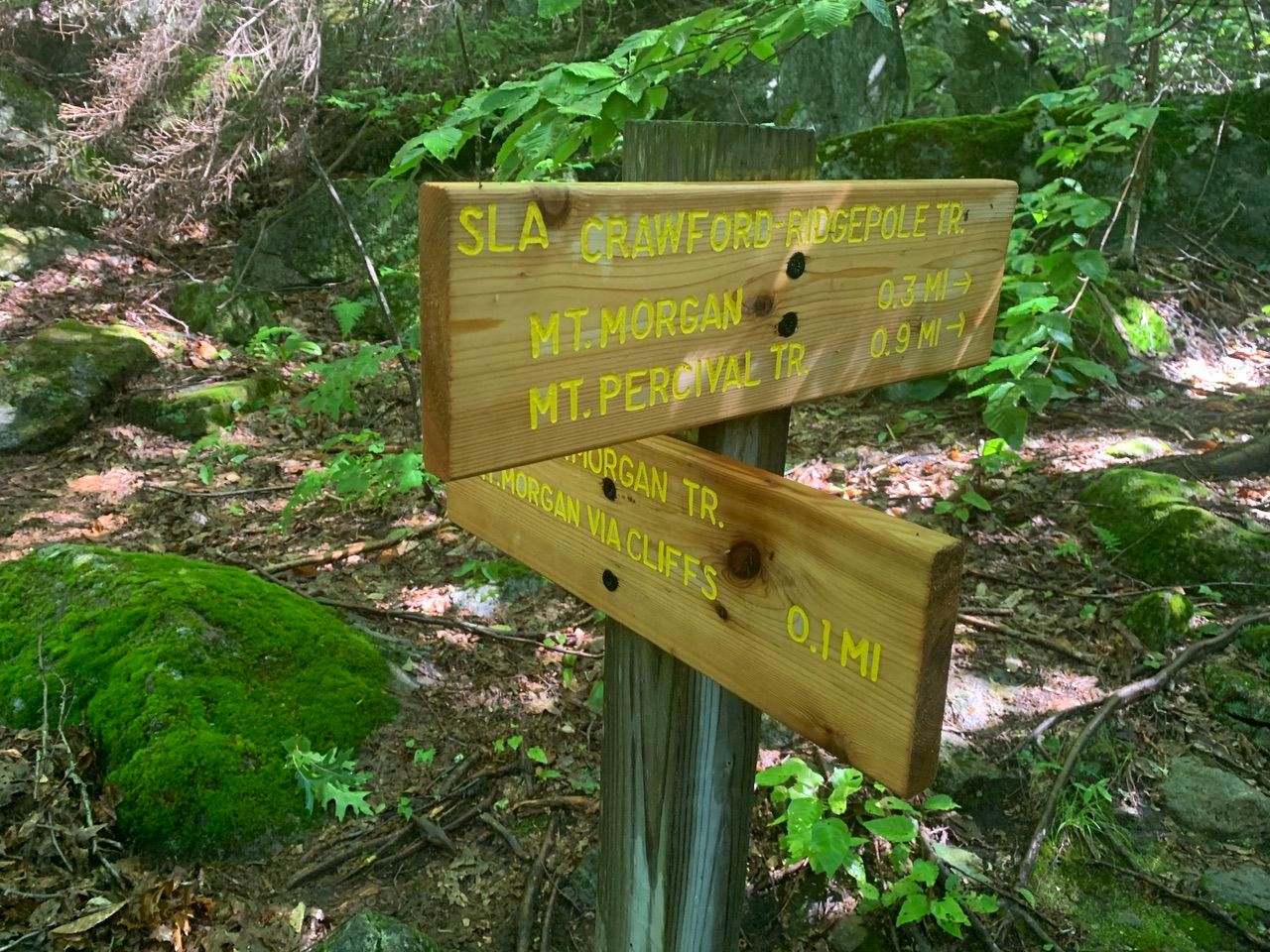 We arrived at the ladders around 9:30 am, about 1.9 miles in. We had to wait a bit for a group ahead of us, but we all social distanced. Actually the ladders were easy compared to the scary rock scrambling that followed. 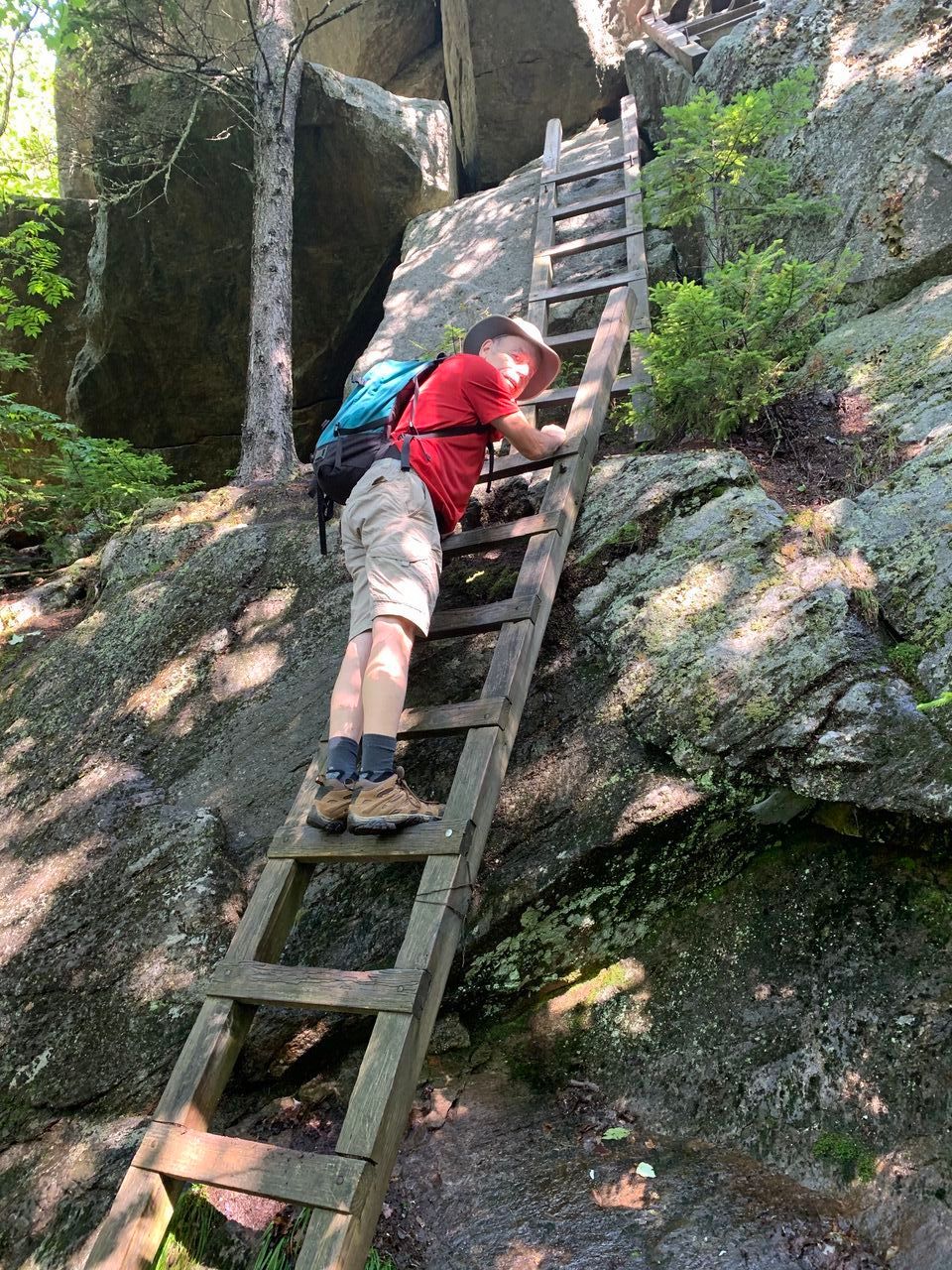 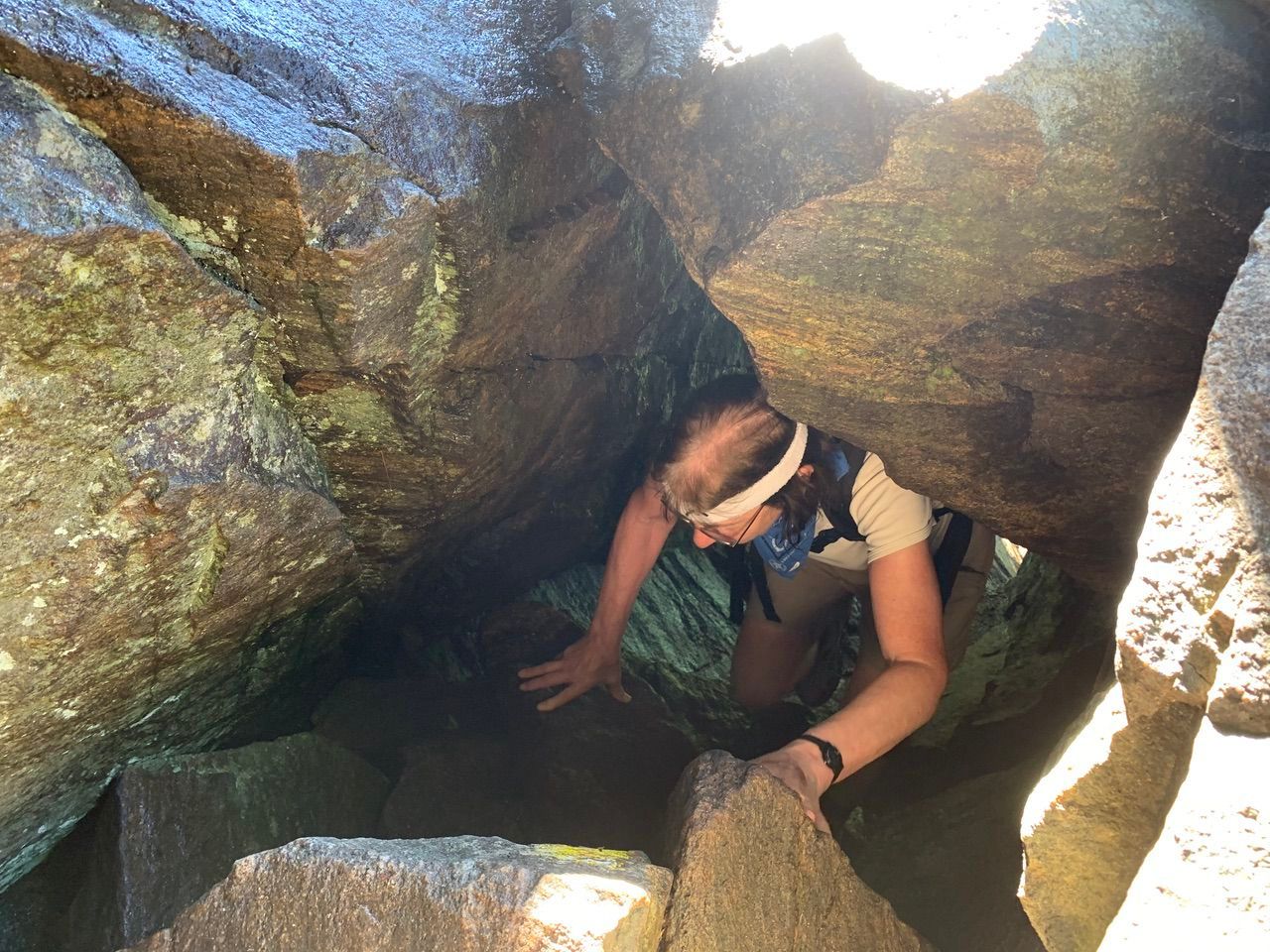 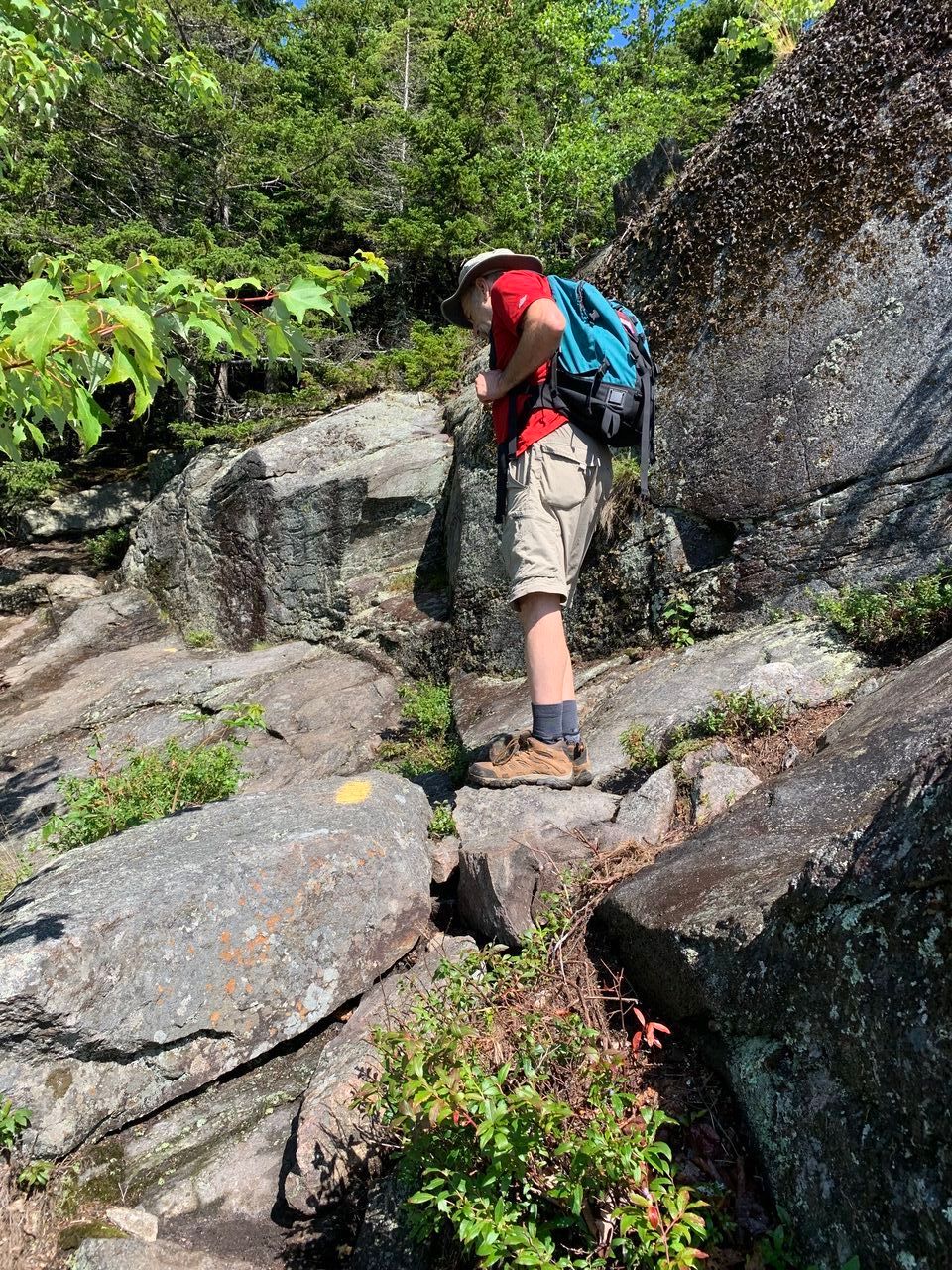 We got to the outlook at about 9:55 am. There were excellent views of Squam Lake and the northern part of Lake Winnipesaukee and the surrounding area. After a break, we took a short side path up and back to the somewhat uninteresting true summit. 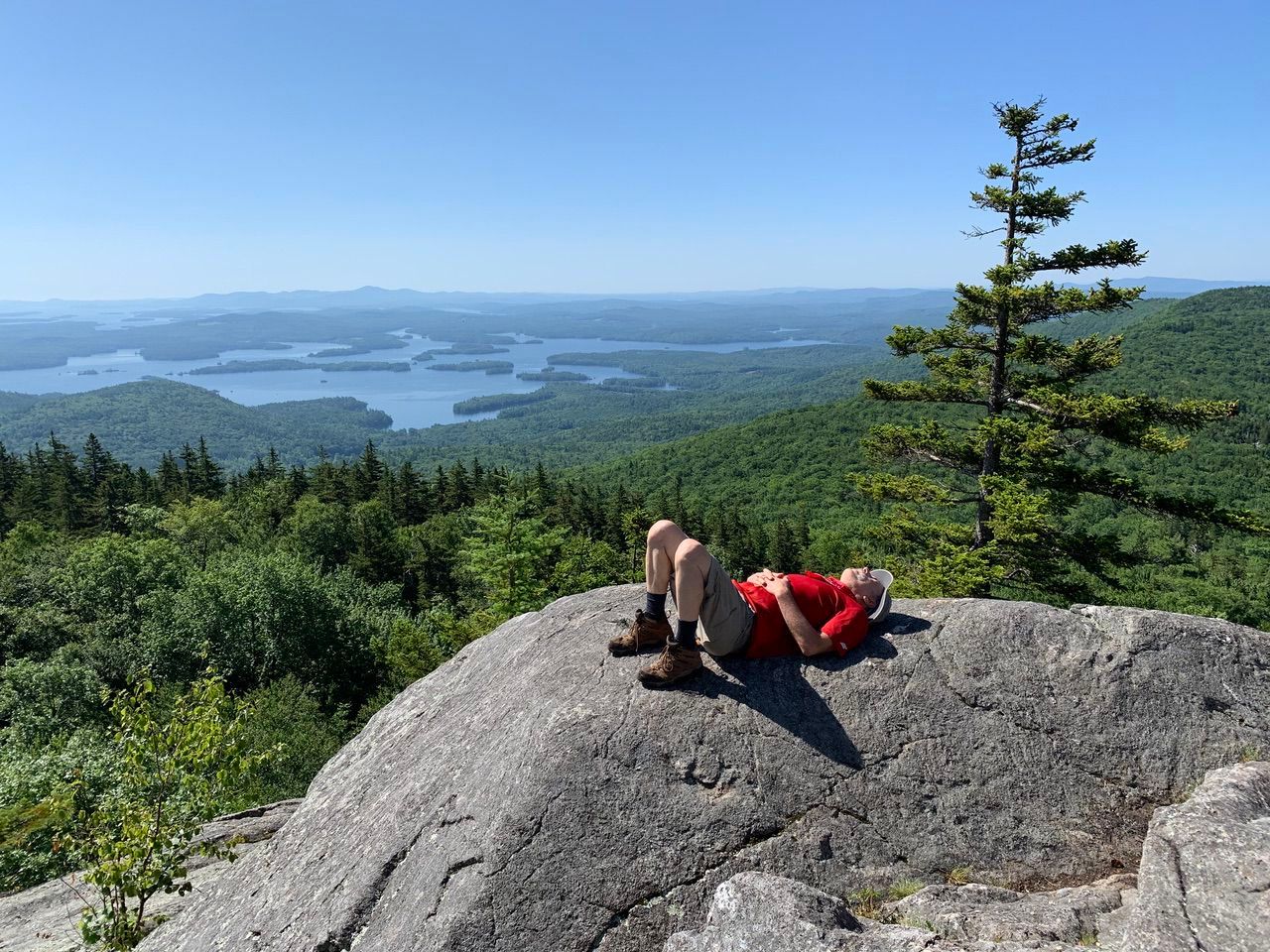 Then we headed down the path that one would take up if skipping the ladder route. At the intersection with the Crawford-Ridgepole Trail, we had to take care to turn left to go to Mount Percival, as veering right would cause a double back down to the trail the way we came. 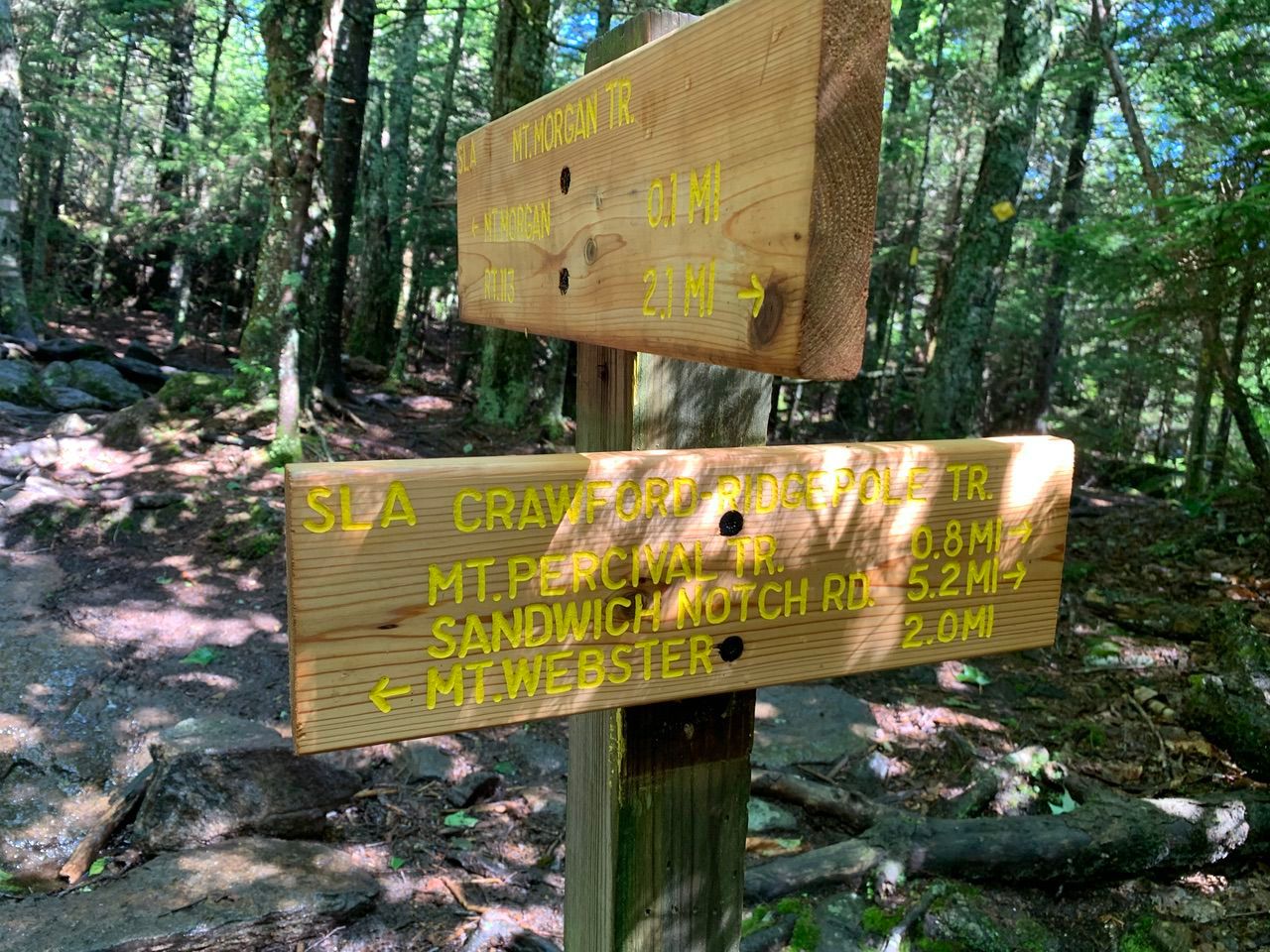 It was about .8 miles to Mount Percival, with large swaths of low-bush blueberry everywhere, and with delicious berries at most sunny and rocky spots. 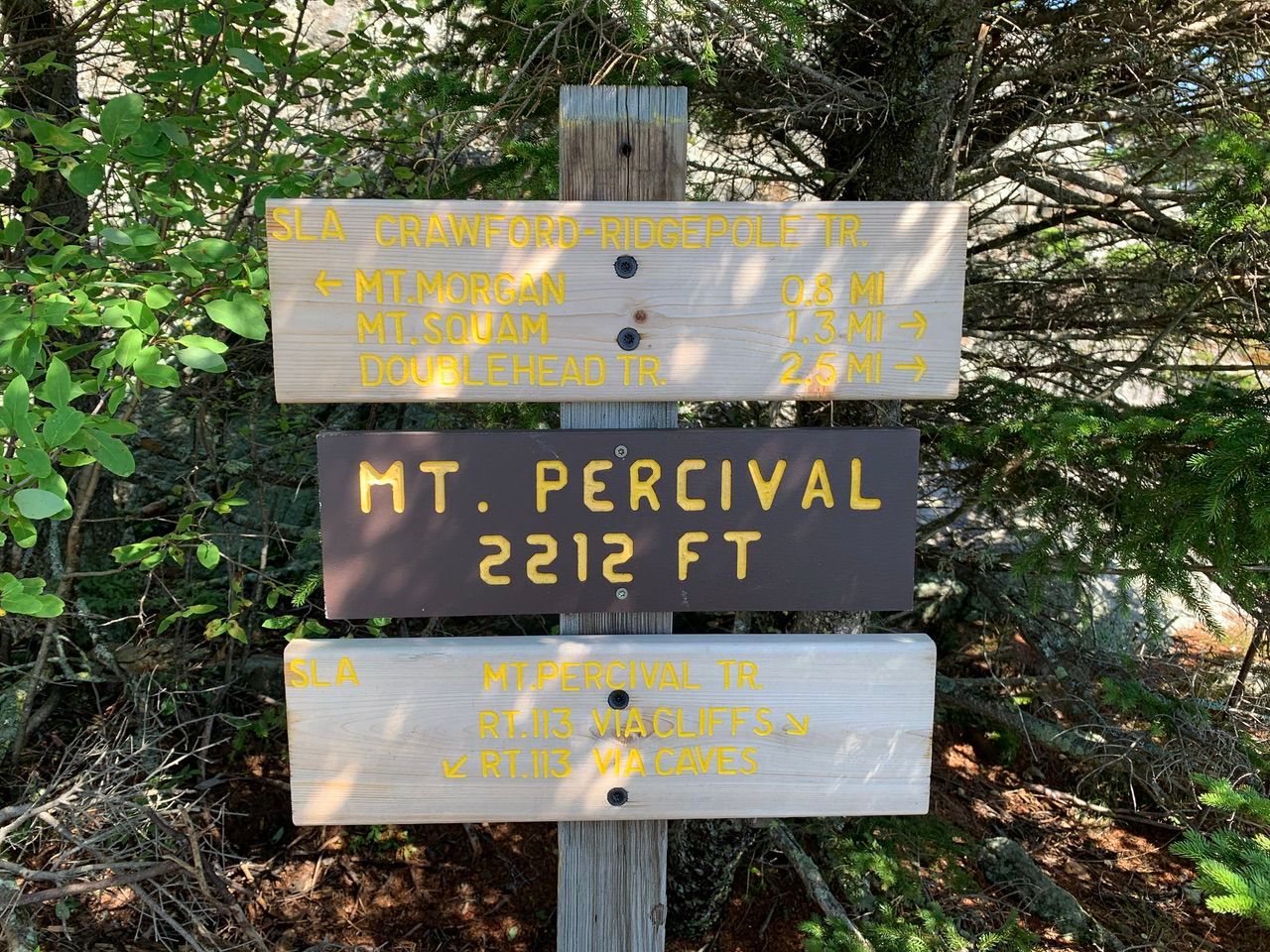 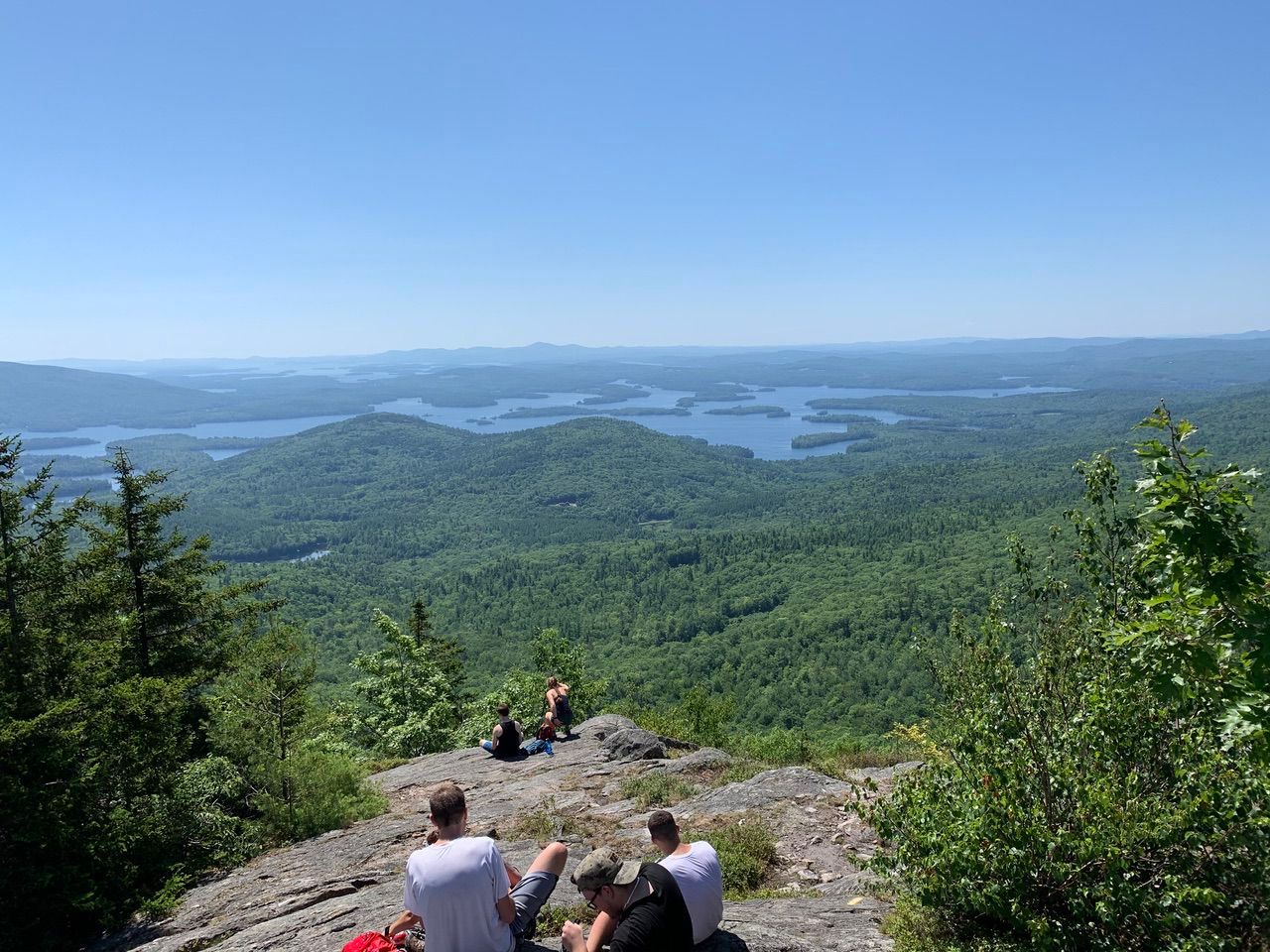 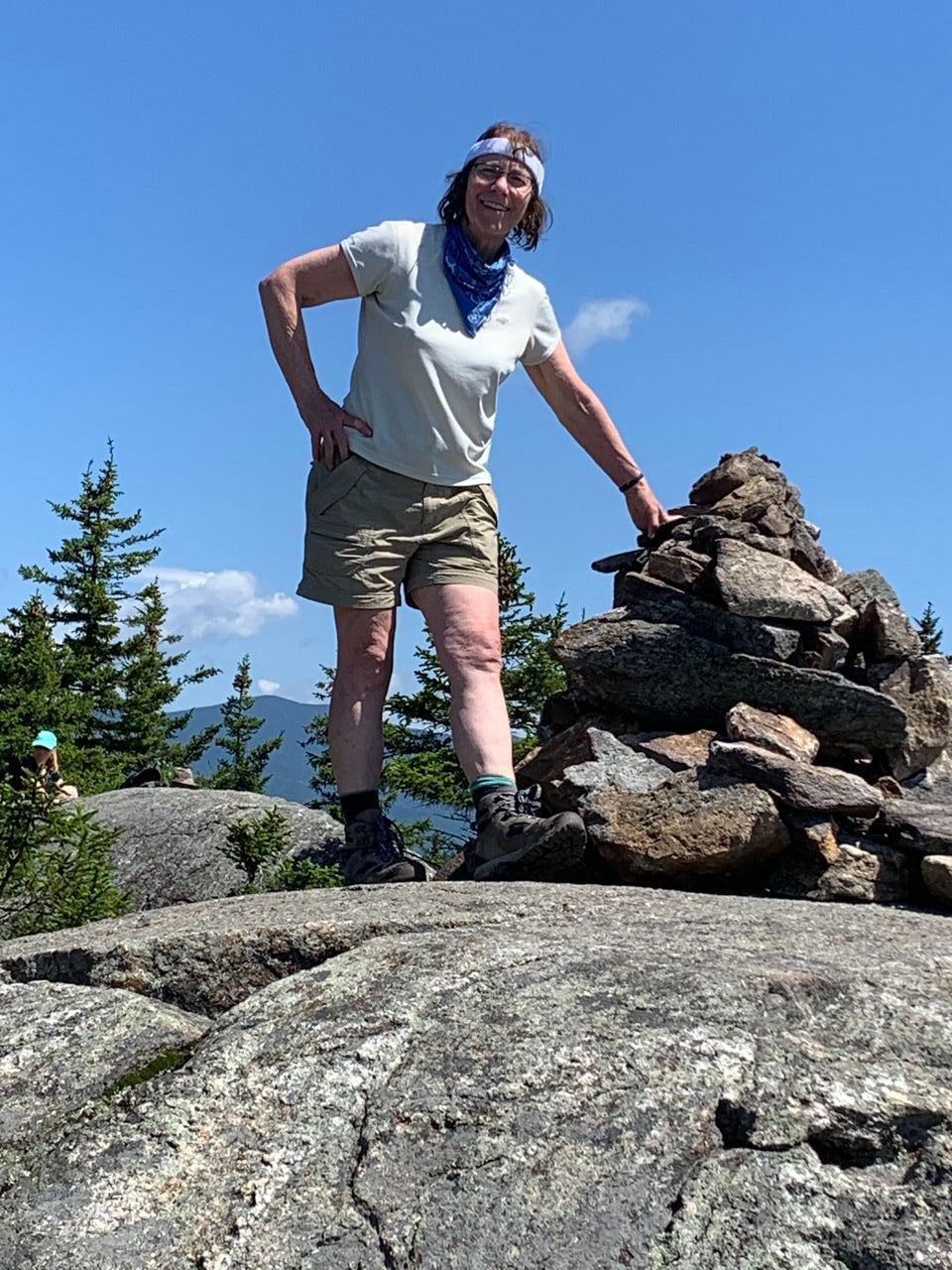 After a lunch break on Mount Percival, we headed down one of the two paths that merged .1 miles later. We went down the path on the left as you face down the mountain. It was extremely rocky and required scrambling, but the other path on the right as you face down the mountain was through caves (not recommended in wet weather, and the rocks were quite wet except on the peaks). Had we read more carefully, we still would have chosen the path we took. 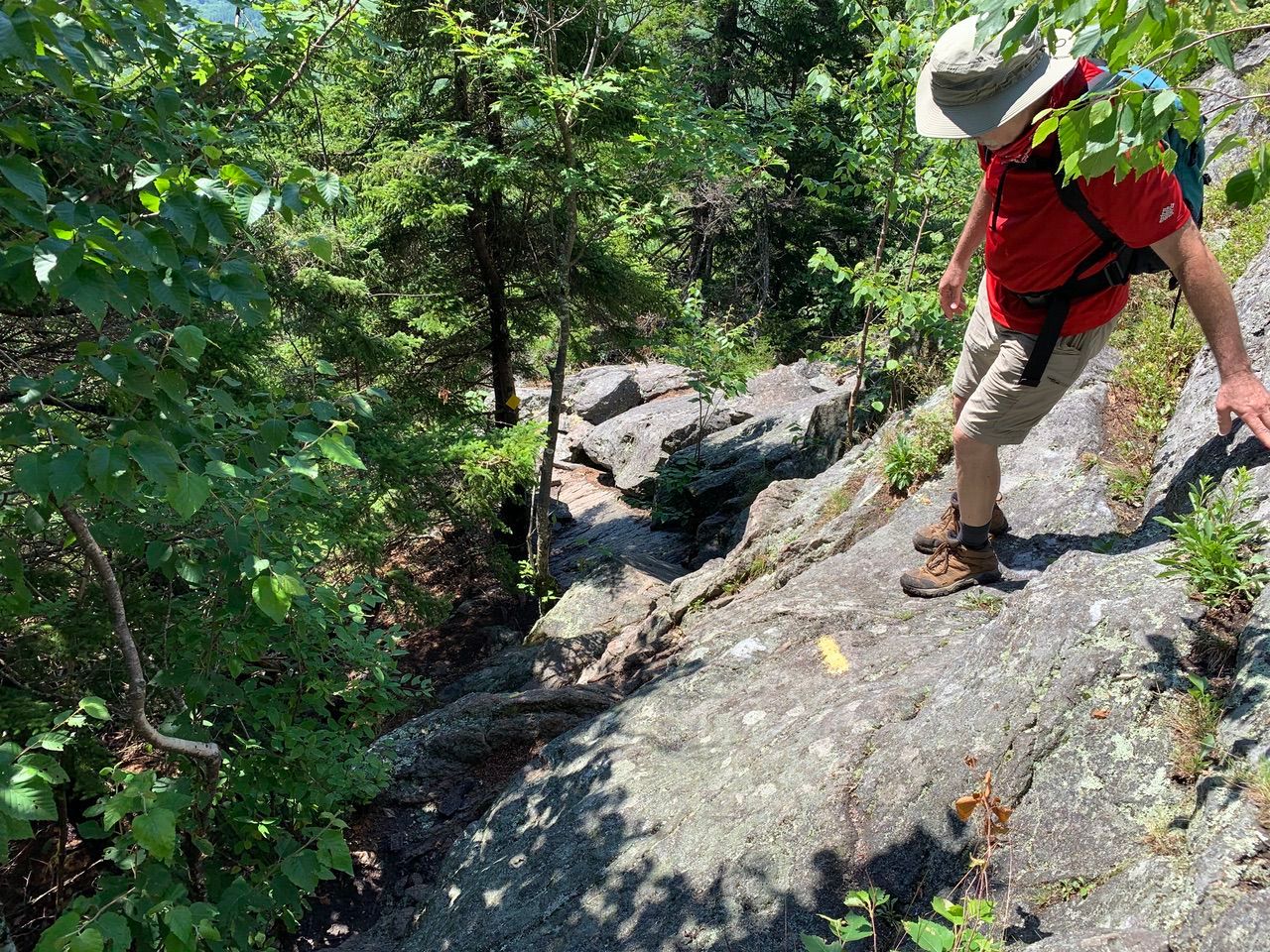 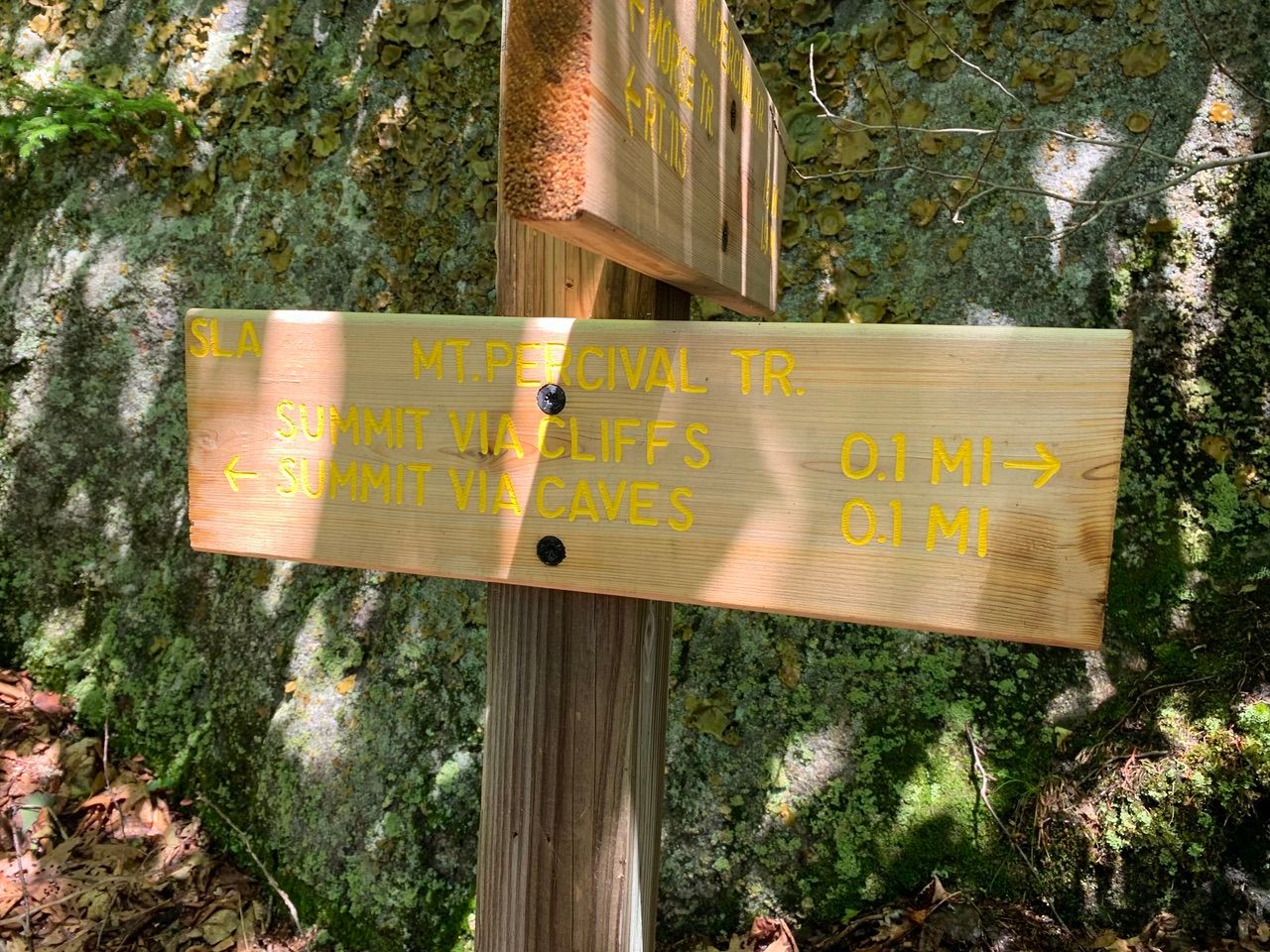 The Mount Percival trail was pretty challenging on the first half, lots of very careful winding down rock faces and boulders, all a little wet.
Eventually the trail became a more standard hiking trail. About 1.1 miles from the top, we crossed a small brook easily.
At 1.8 from the top, we took the Morse Trail for .5 miles back to the Mount Morgan Trail, crossing one brook on a footbridge and one brook by rock hops. 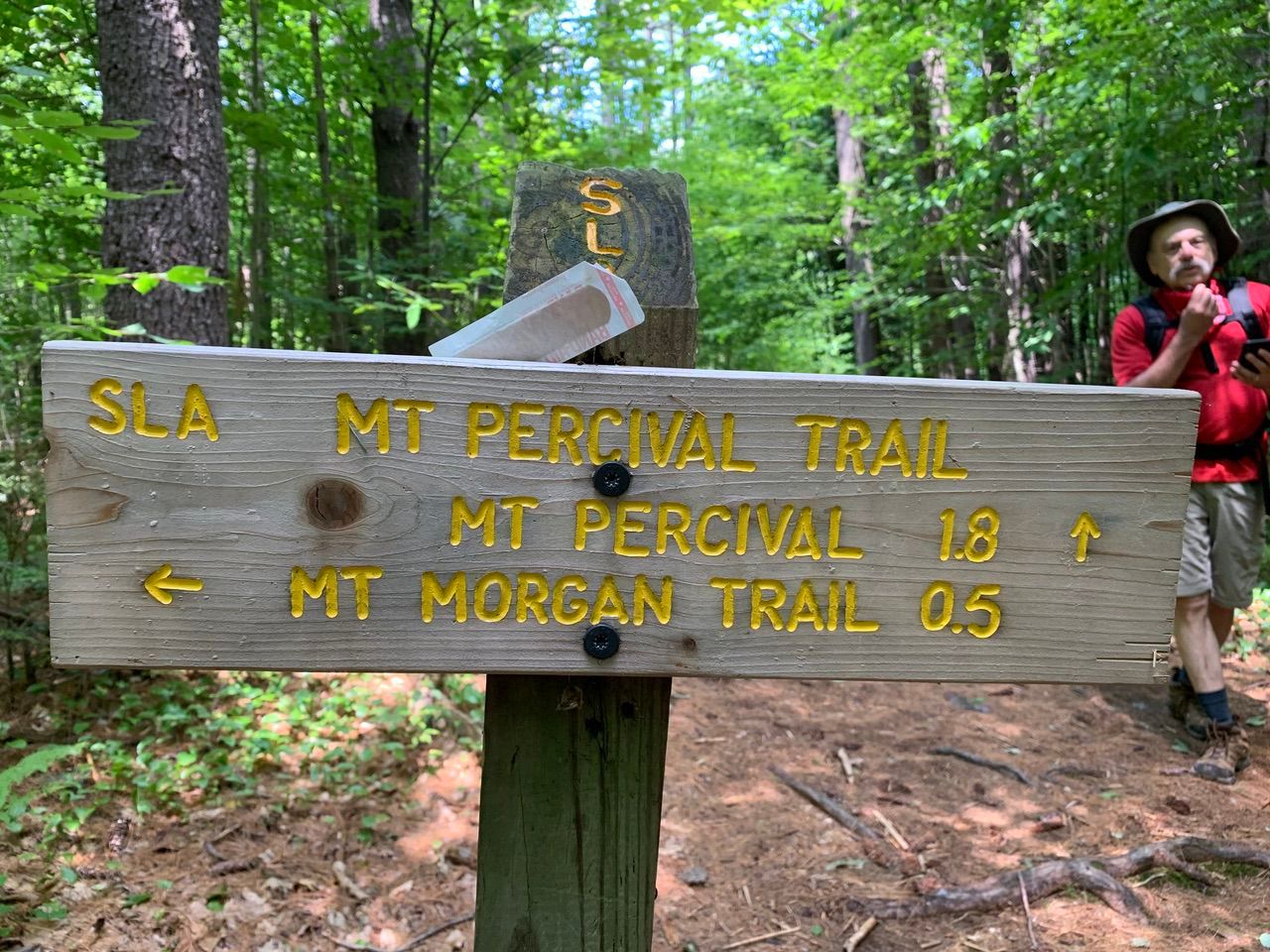 After meeting the Mount Morgan Trail, we headed back the .1 miles to the car. 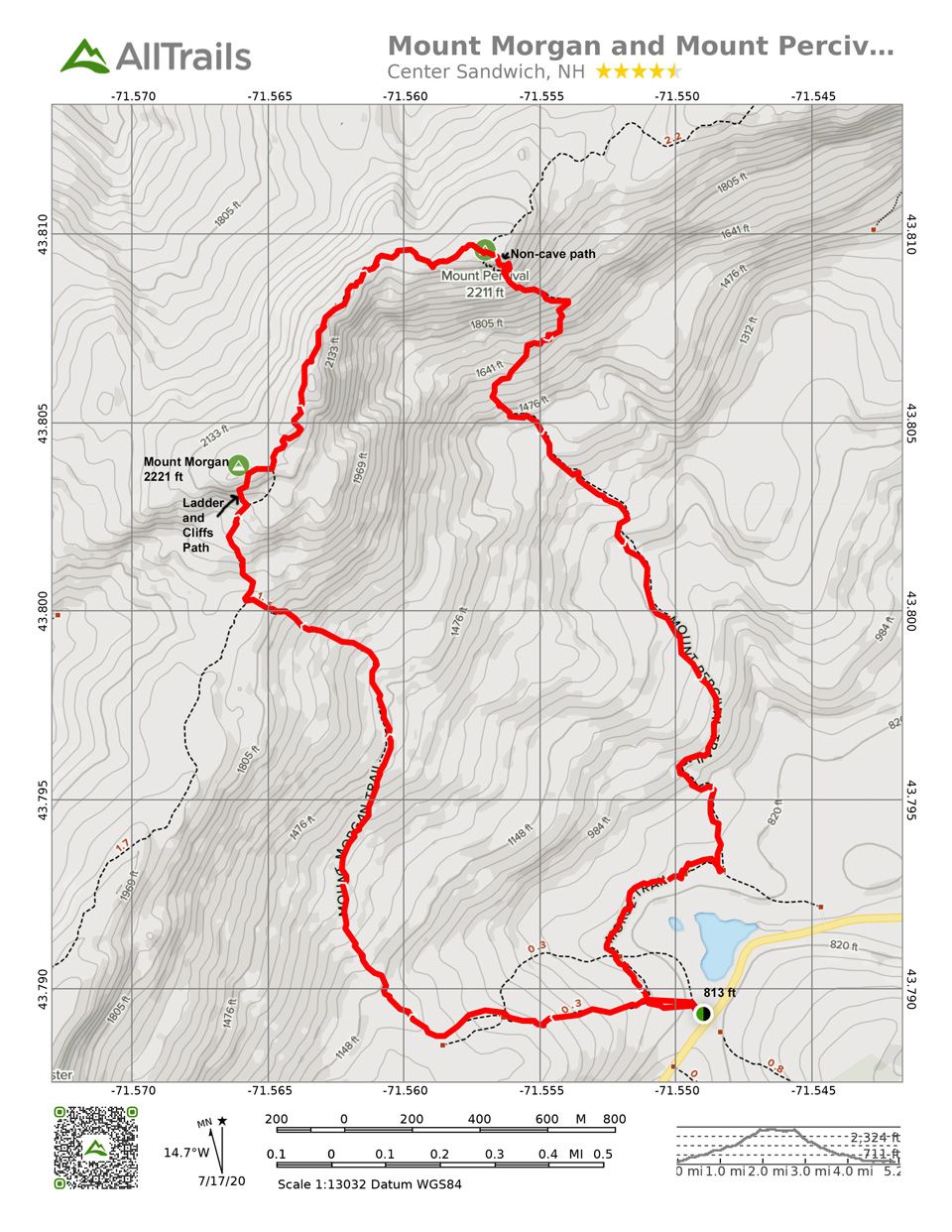 Published by Eileen and Larry Samberg on July 18th, 2020