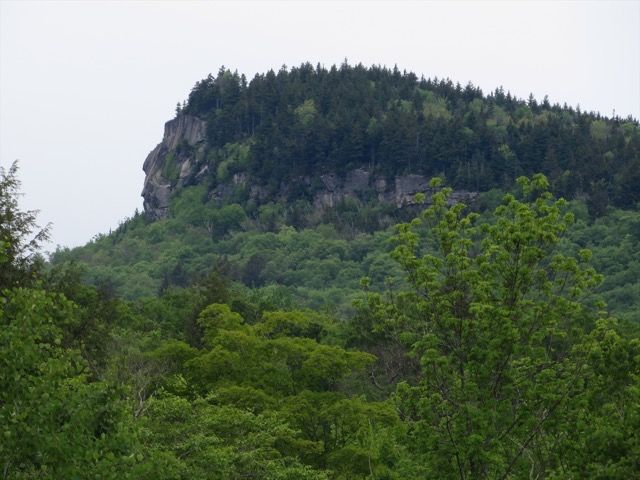 Mt. Pemigewasset (also known as Indian Head, see picture above) is a spur of South Kinsman at the southern end of Franconia Notch. It is a relatively easy hike and one that we recommend to people who are looking for "starter hikes" in the Whites. Mt. Pemigewasset is also on the list of the New Hampshire 52 with a View. We have been hiking to the summit of this mountain at least every two to three years for the last 25 years.
-----
Update: October 18, 2020. Today we hiked the Indian Head Trail up and back, avoiding the more popular Mt. Pemigewasset Trail. With a nice day after the rains of the last two days, and Covid-19 hiking, the trail was busier than usual, and the top was pretty crowded. We did find a nice spot on ledge away from most people. The hike along Hanson Brook was quite pretty, but there was a lot of water and muck on the trail.
-----
There are two trails that ascend to the peak, the more popular Mt. Pemigewasset trail that climbs from the northeast to the top, and the Indian Head trail that climbs from the southeast. We hiked this mountain for the first time about 25 years ago when the kids were young (like 7 and 4). We went up the Mt. Pemi trail and decide to descend the Indian Head trail. The descent was not a good idea 25 years ago with two young kids. The Indian Head trail was not well-marked and easy to lose, we ended up doing some bushwacking and walking back along the exit ramp of I-93 at the bottom. So after that we stuck to the Mt. Pemi trail.
In the years since, the Indian Head Trail has been improved and blazed well. So we decided, this year, to ascend on the Indian Trail and descend on the Mt. Pemigewasset Trail.
The Indian Head trail leaves Route 3 at a small parking area on the west side of the road about 1 mile south of the Flume Gorge area and a few hundred yards south of the Indian Head resort. There is a sign on route 3 that says "Trailhead Parking". We didn’t park there. Instead we parked at the Flume Gorge parking area and walked the mile down to the trailhead since we knew we would be ending up at the Flume Gorge area at the end (since that is where the Mt. Pemigewasset Trail begins). 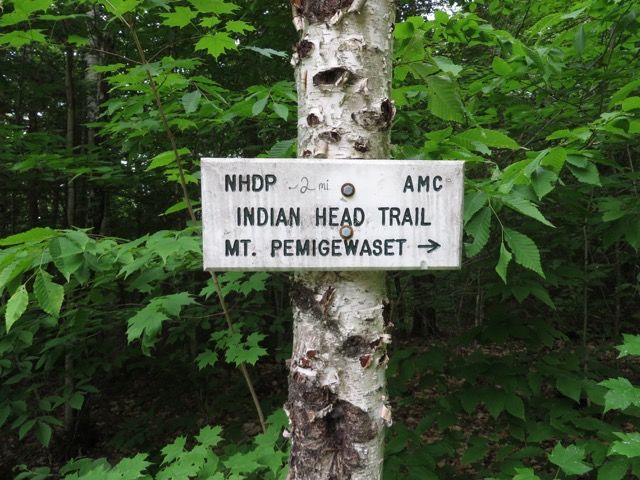 The Indian Head Trail is 1.9 miles to the summit. After leaving the parking area you spend some time wandering around the woods to get to the openings under I-93, first the northbound lane and then the southbound lane. 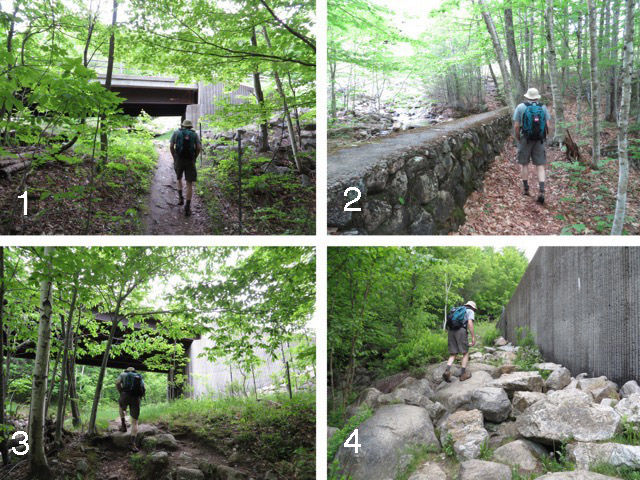 For the first mile the grade is easy and the trail is in good shape. There are yellow blazes for the entire trail. 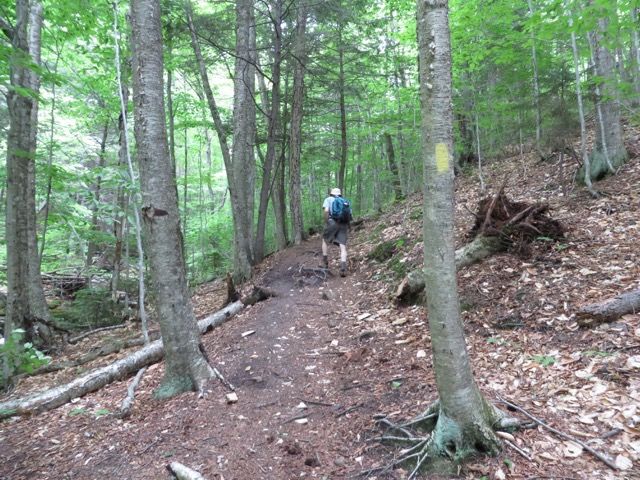 This large rock is a about a half mile in. 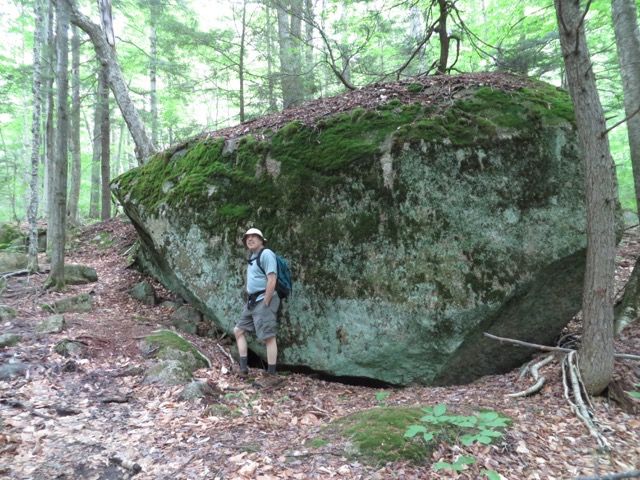 Much of the trail follows Hanson Brook and there are some nice cascades. 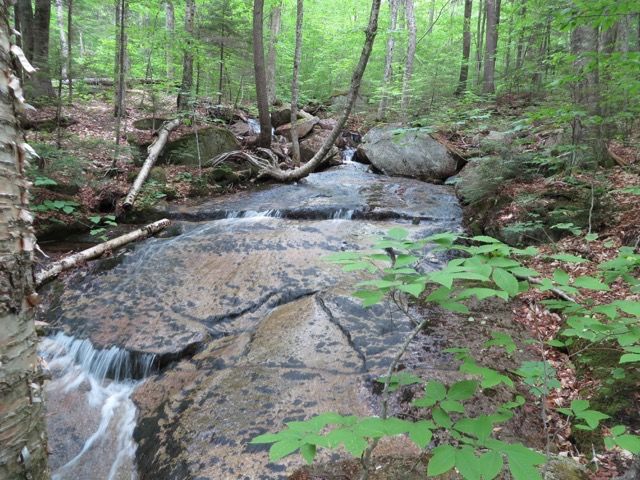 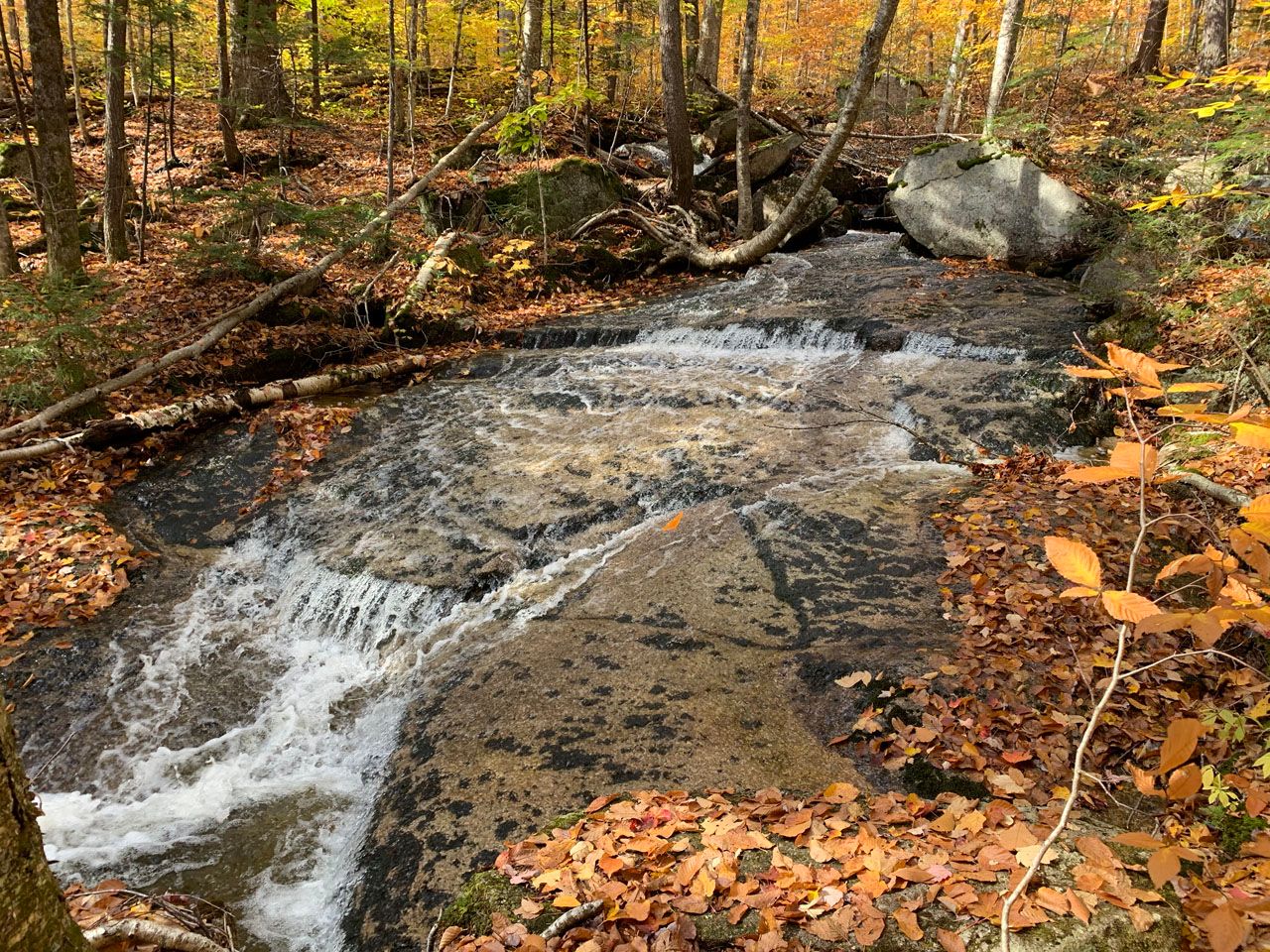 After about a mile the trail gets a little steeper and a bit wetter. At about 1.1 miles in, there is a short jaunt on a old washed-out logging road. 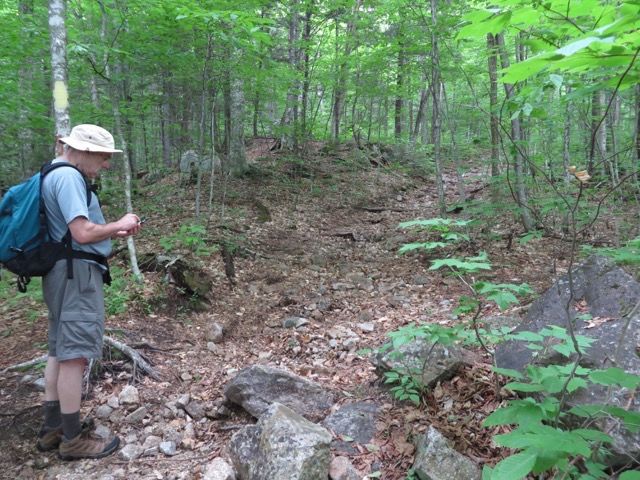 A little steeper section as we head up to meet with the Mt. Pemigewasset Trail. 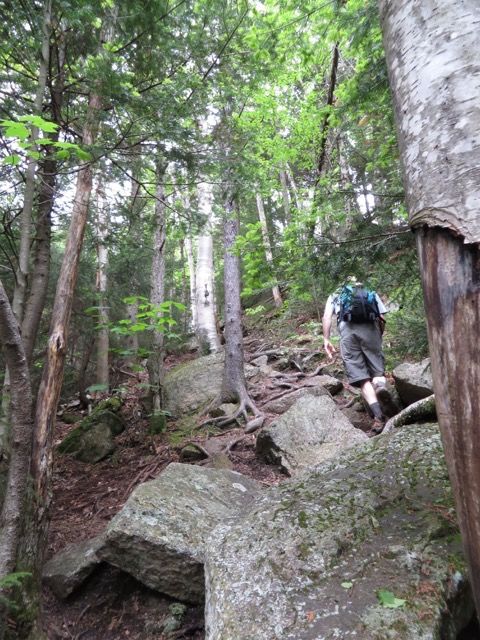 This "steep" section is only for a couple of hundred yards before it intersects with the Mt. Pemigewasset Trail (which is blazed in blue). 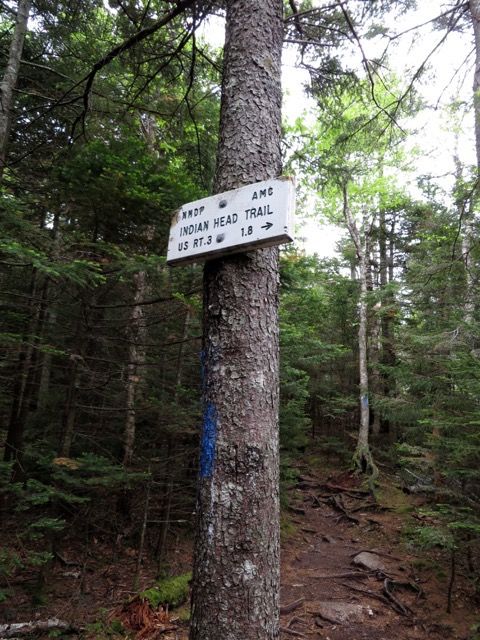 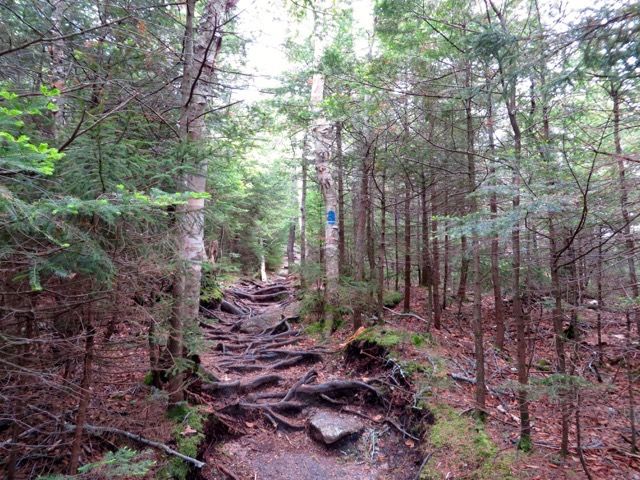 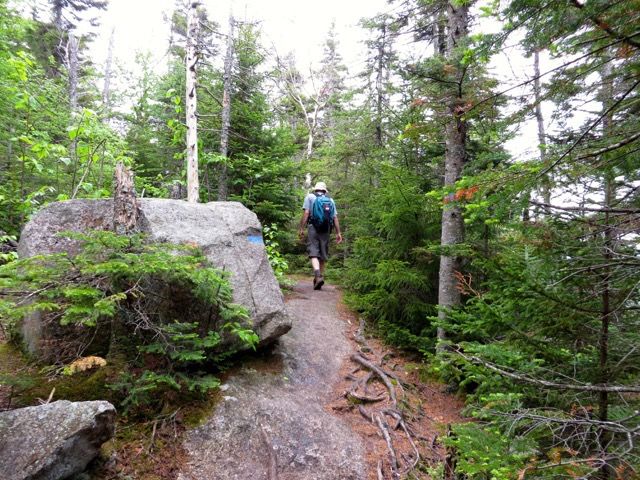 From the intersection it is only a short distance to the summit. Families with young children are always cautioned about the sudden dropoff after coming out of the woods. 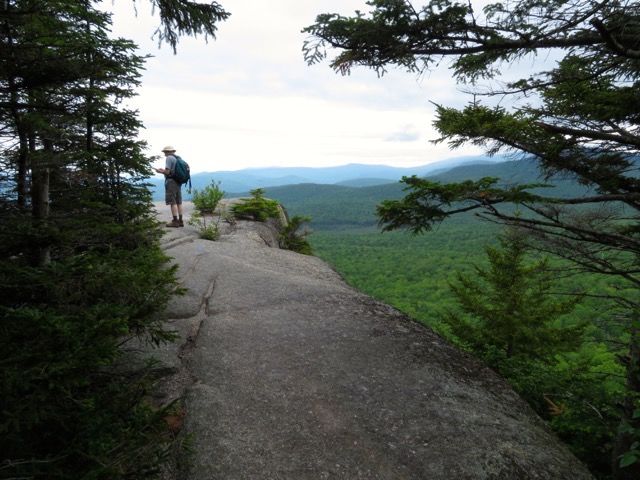 Unfortunately the day was a bit cloudy (and drizzly at times) so the views were somewhat limited. These two pictures (below) are looking west towards South Kinsman. 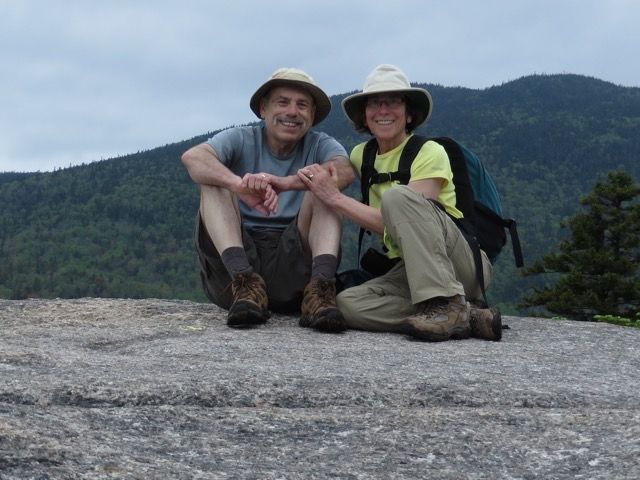 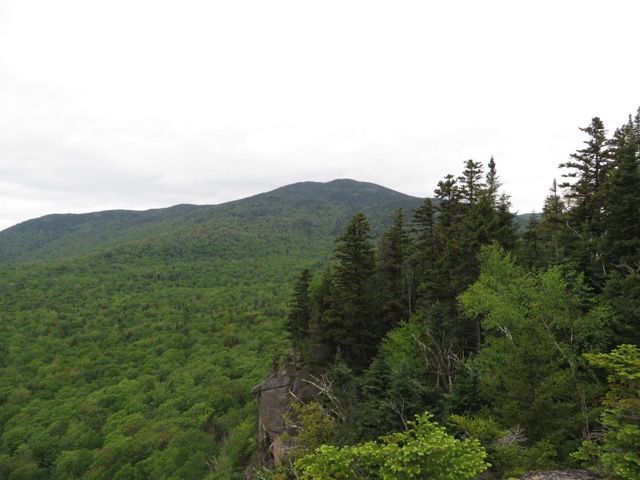 Looking more directly south you can see I-93 winding its way through Lincoln and beyond. 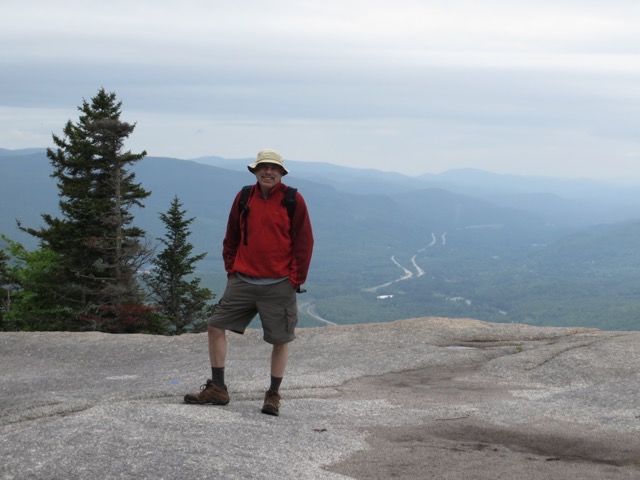 Rotating a bit more towards the east you can see the buildings in downtown Lincoln with the new RiverWalk construction behind them. 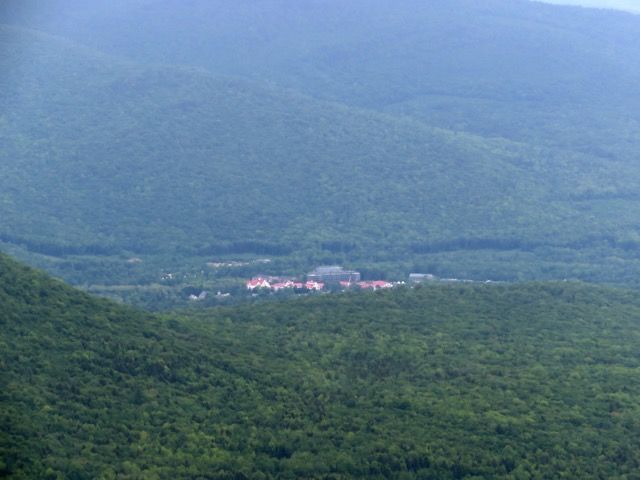 And finally a bit more to the east is Loon Mountain. You can see the top of Walking Boss and Flume on the left side with Sunset coming around the top. A bit farther to the right is the top of South Peak with Upper Twitcher, Ripsaw, and Cruiser visible. The large mountain in the background of the saddle between Loon Main Peak and Loon South Peak is Mt. Tecumseh (at 4003 feet, the lowest of the 4000 footers and the home of Waterville Valley Ski Area). 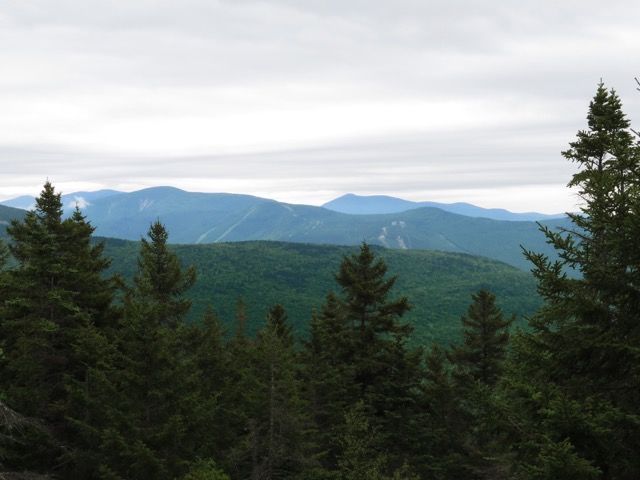 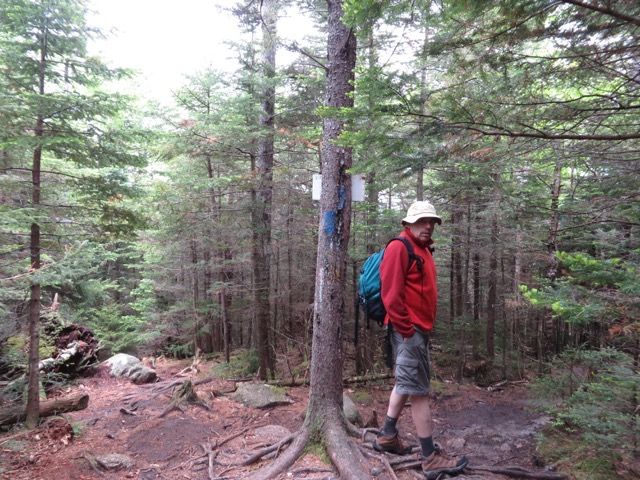 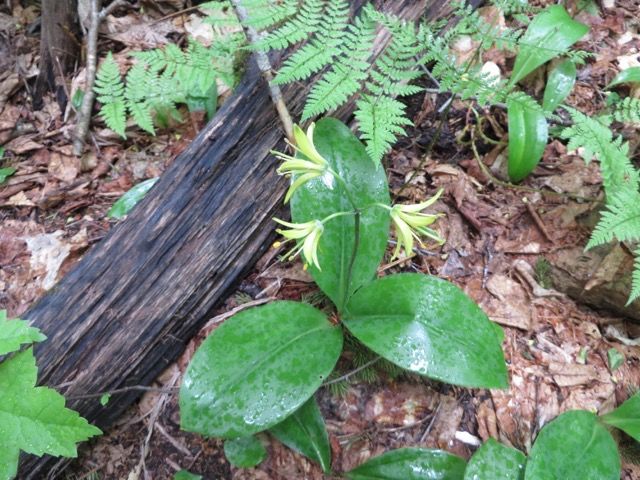 Big rock — just about the only landmark on this route. 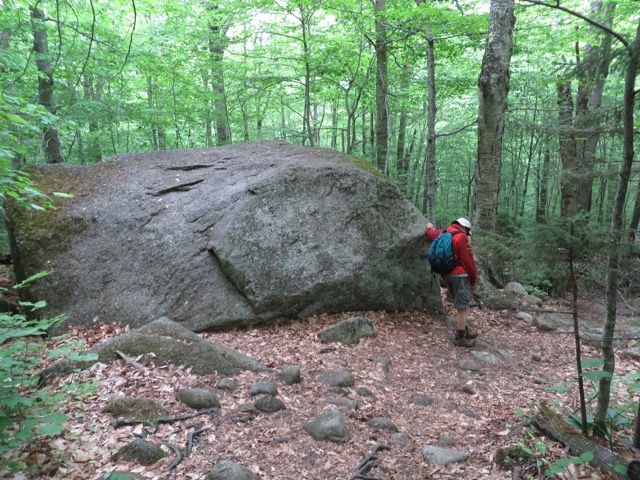 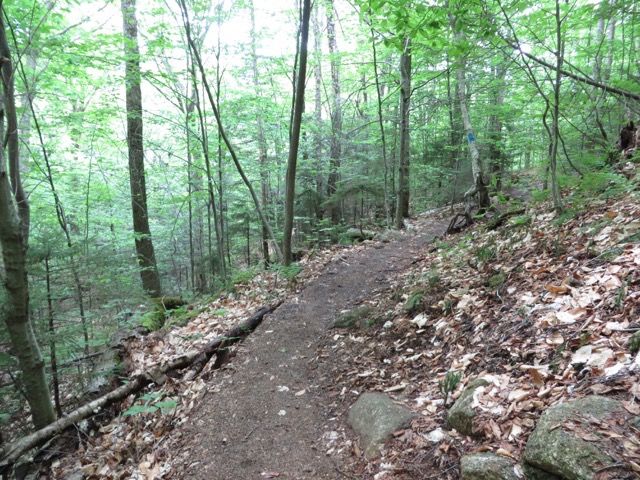 Though we didn’t post any pictures, there are a few easy stream crossings, one rock hop each, towards the end. At the bottom on the Mt. Pemigewasset Trail, you have to go under the southbound lane of I-93, then the northbound lane, and then after wandering a bit you go under Rt 3 and end up on the Franconia Notch bike path a few hundred feet from the north end of the Flume Gorge parking lot. 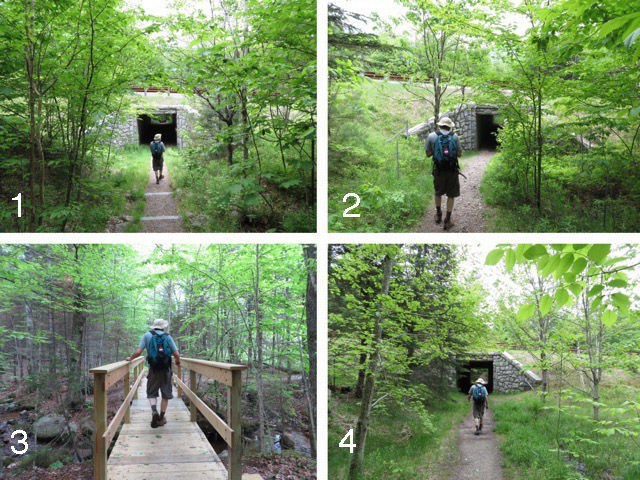 We choose to believe that the AMC book is right (1.8 miles), and this sign is wrong :) It really depends on where you start counting from. 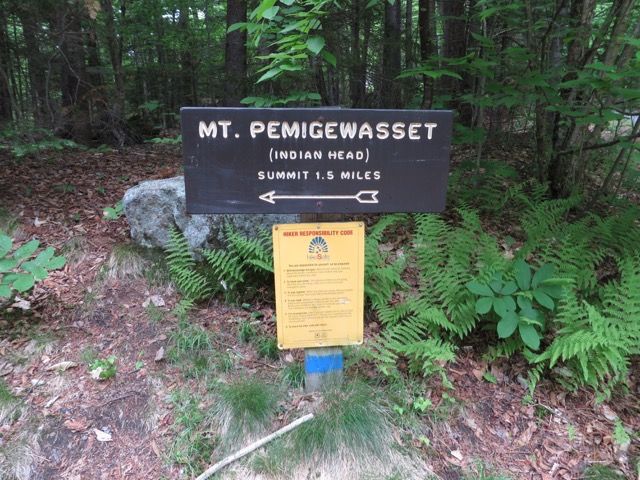 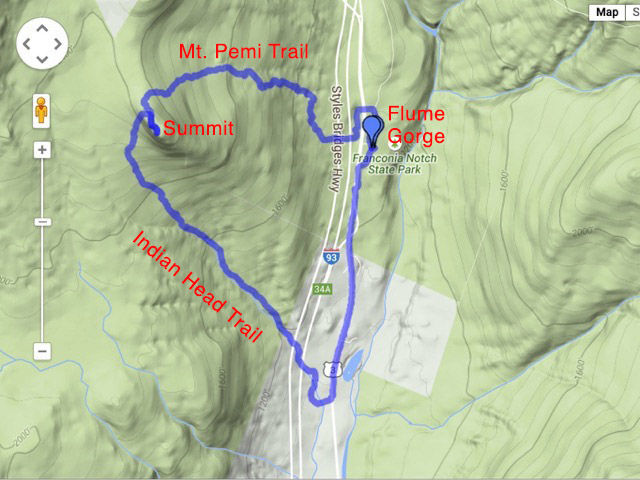 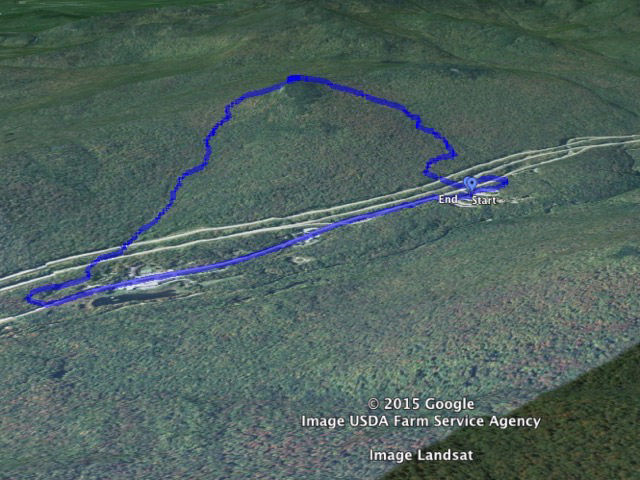 The summit is just over 2500 feet, so the Indian Head Trail has a rise of about 1500 feet and the Pemi Trail has a rise of about 1200 feet. Our hiking time was about 1:20 up (including stops for pictures) and about 1:10 down. The total distance including the walk along Route 3 was 4.75 miles. Our ratings (see the rating table):
Bang for the buck: High
Length of trip: 2/5
Strenuous: 3/5 (at the lower end of 3 :)
Trail composition: 1.5/5
Ease of following trail: 1/3
For an excellent description of the trails and a history of Mt. Pemigewasset, you can read Steve Smith’s blog at http://mountainwandering.blogspot.com/2012/05/mount-pemigewasset-51112-went-for-hike.html and his google docs at https://docs.google.com/document/d/10rSehau_BeDHG7Ab7EWJBQPdKEuXxOf-p0oht9EeGPs/edit
Eileen and Larry Samberg
05-June-2015

Published by Eileen and Larry Samberg on June 5th, 2015