North of Twin Mountain there are two mountain ranges that are in a disconnected part of the White Mountain National Forest, sometimes referred to as the North Country. Each of them has one 4000 footer. The Pliny Range includes Mt. Waumbek, and a bit farther north, the Pilot Range includes Mt. Cabot.
On a sunny September Saturday in the 70’s, we headed up to Jefferson, NH to hike Mt. Starr King, on the 52 with a View (52WAV) — the second highest on the list – and continued on to Mt. Waumbek (at 4006 ft), one of the four thousand footers in the White Mountains. So this hike was a twofer, we hit a 4000 footer and a 52 with a View. We last did this hike in 2013 but did not blog it (we started the blog in 2014).
There were a number of people hiking — but except for the viewpoints, we were pretty scattered along the trail and everyone was respectful of distance.
By 9:30 am, the parking lot just off Route 2 on Starr King Road was mostly full, but we did find a spot just past the main lot and not in the road or near the driveways. The hike to Mt. Starr King is 2.6 miles with an elevation gain of 2300 feet (1600 feet at the trailhead and 3900 feet at the summit). The hike was actually pretty strenuous, with a steady 15-20% grade for the entire route (see the chart at the end). Mt. Waumbek is a mile further and at an elevation of 4006 feet, about 100 feet higher (but of course you have to go down about 120 feet before you go back up). That part of the hike was fairly easy, in comparison.
The trail is well-worn, easy to follow, blazed in yellow, with no scrambles or water crossings. Because the trail is so heavily used, there were a lot of rocks and roots. 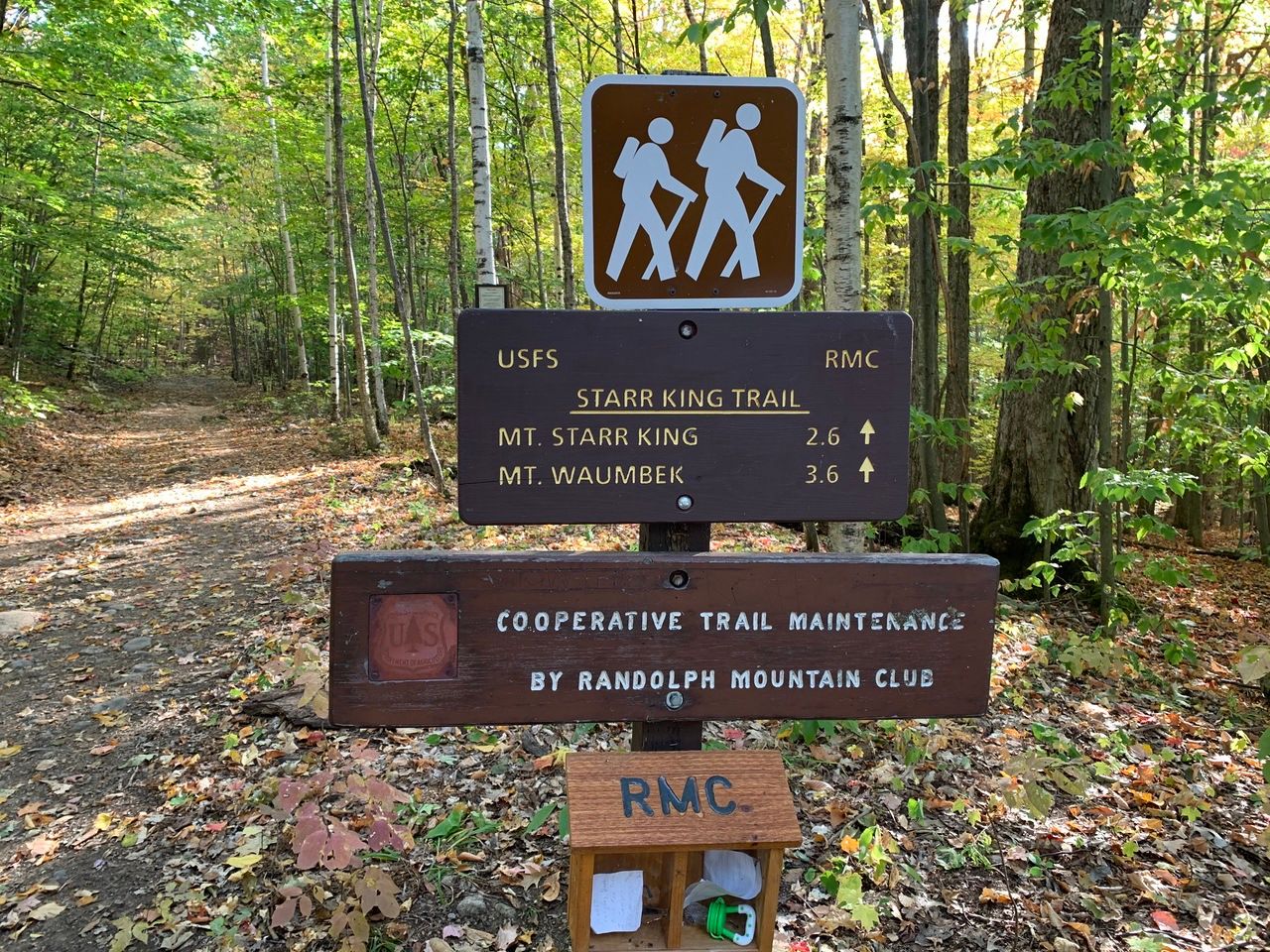 Immediately after starting, the trail passes the foundation of a springhouse. 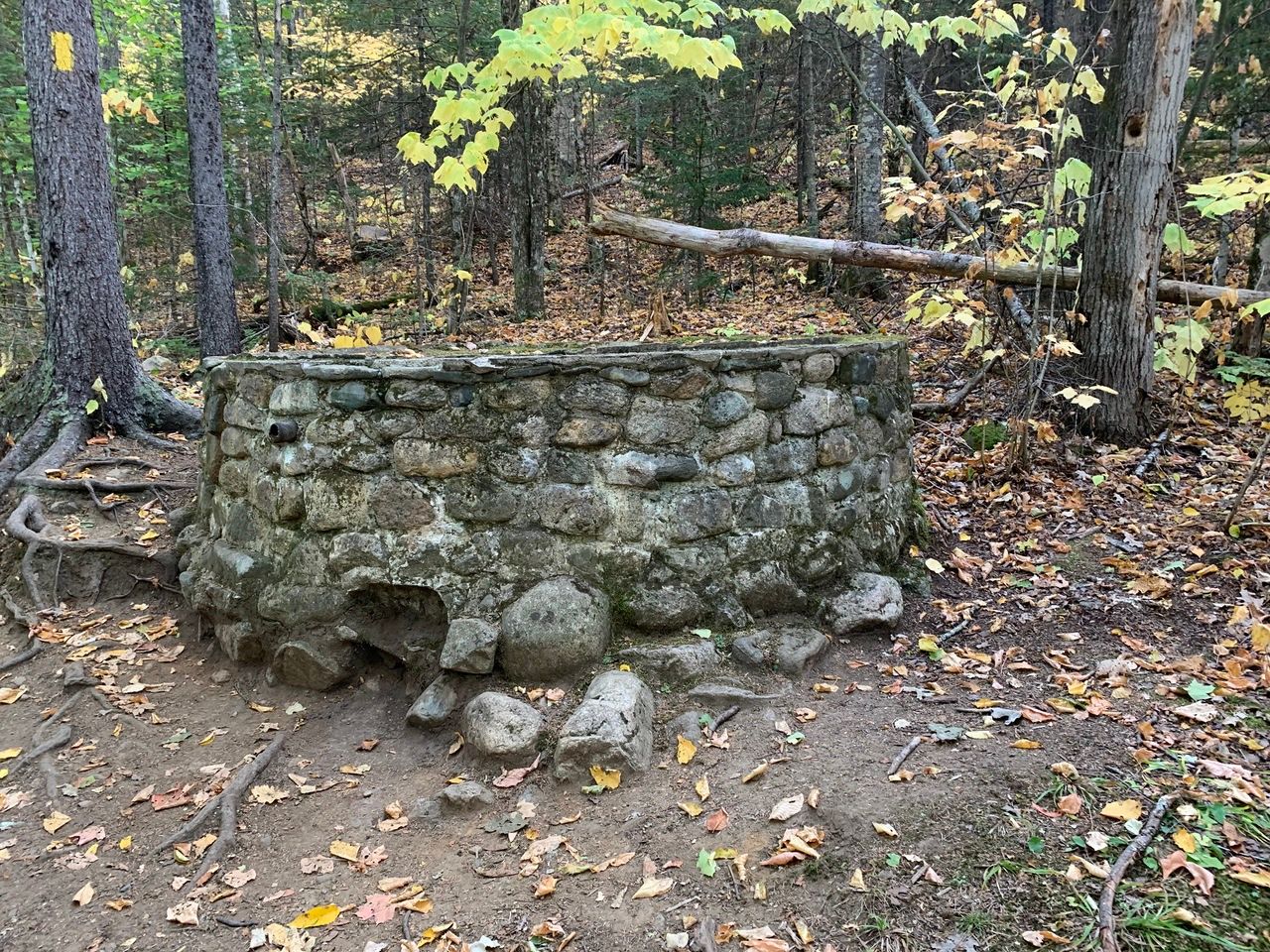 The trail starts in hardwoods, and transitions to conifers at about 1.4 miles, and ascends the west flank of the mountain. At 2.1 miles (elev. 3400), there is a sign on the left for a spring. 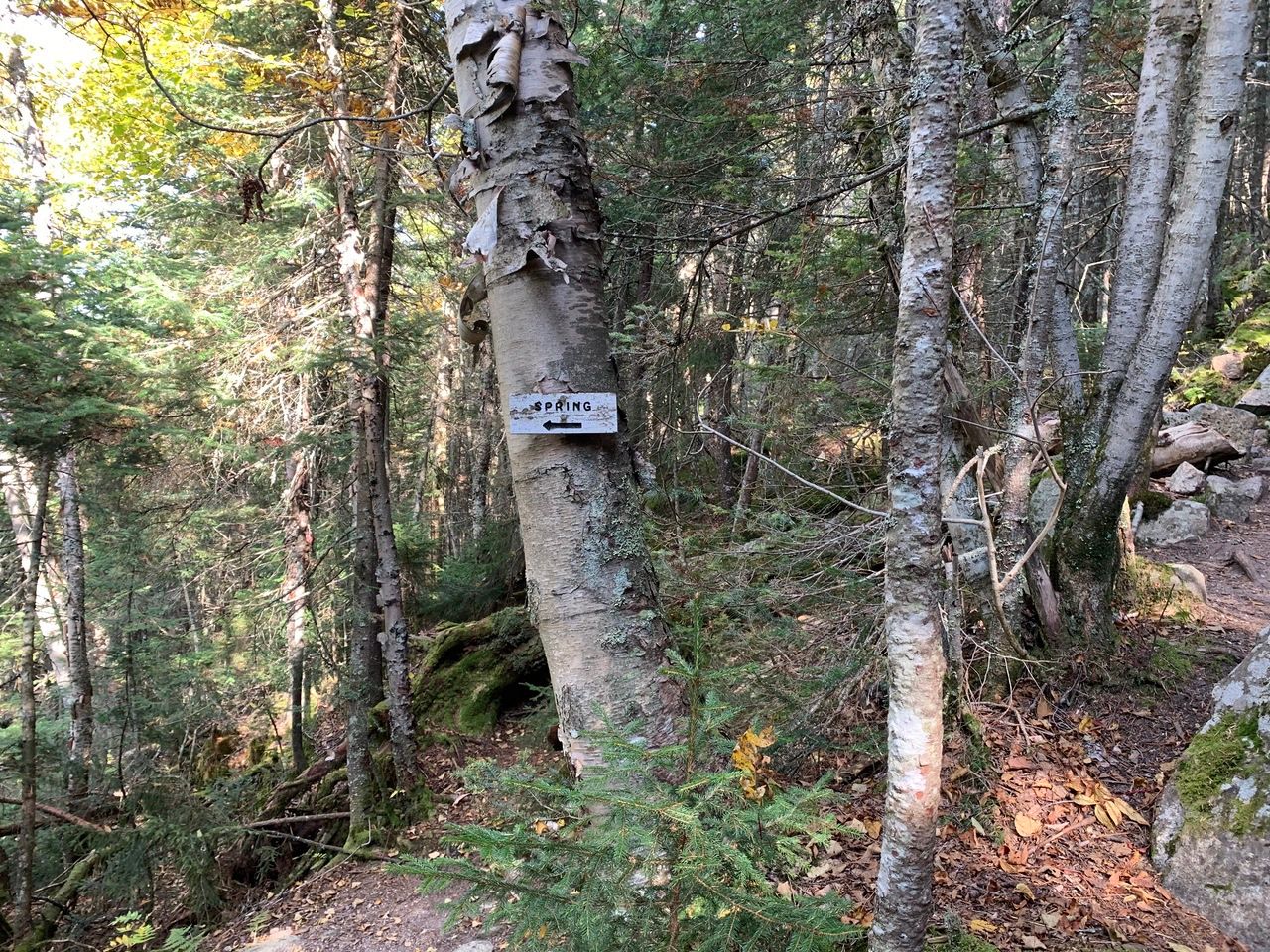 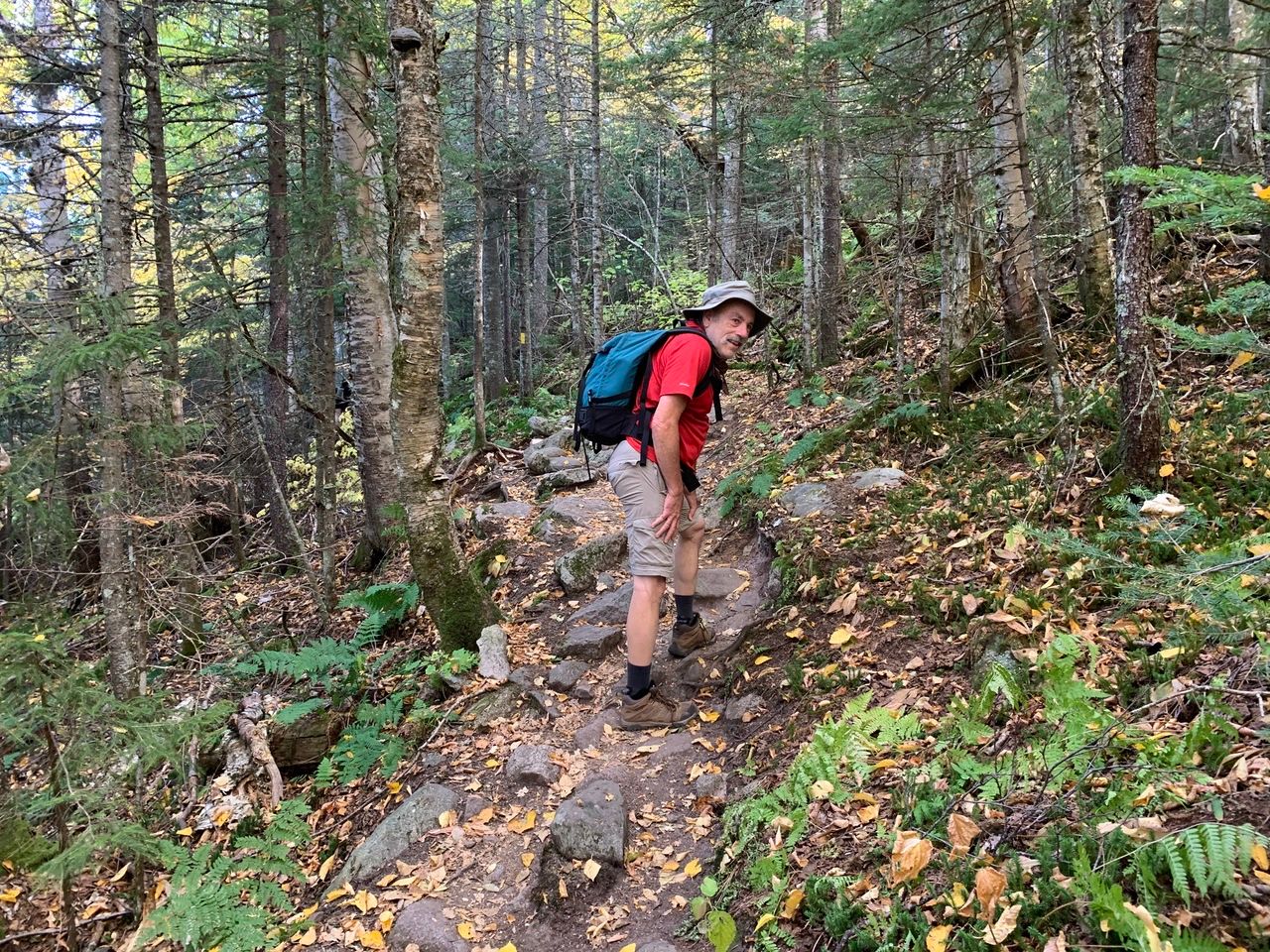 At 2.5 miles, the trail swings right and ascends to the wooded summit of Mt. Starr King at 2.6 miles. The ascent took us about one hour and 45 minutes. 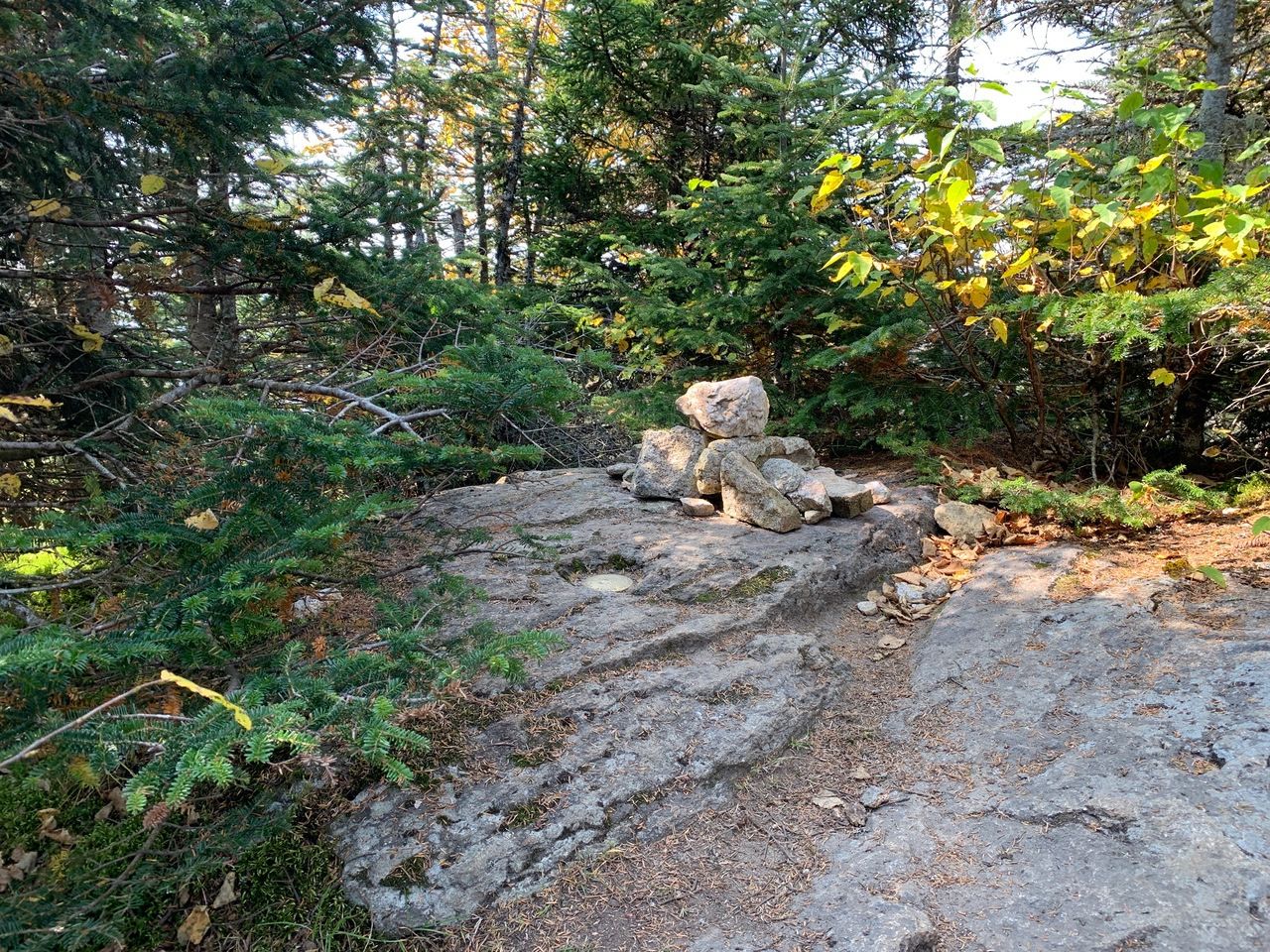 We continued for another 50 or 60 yards to the clearing from a former cabin for a view of the Presidential Range, which was very hazy, maybe from the California wildfires. The best photo op was of Canada Jays. 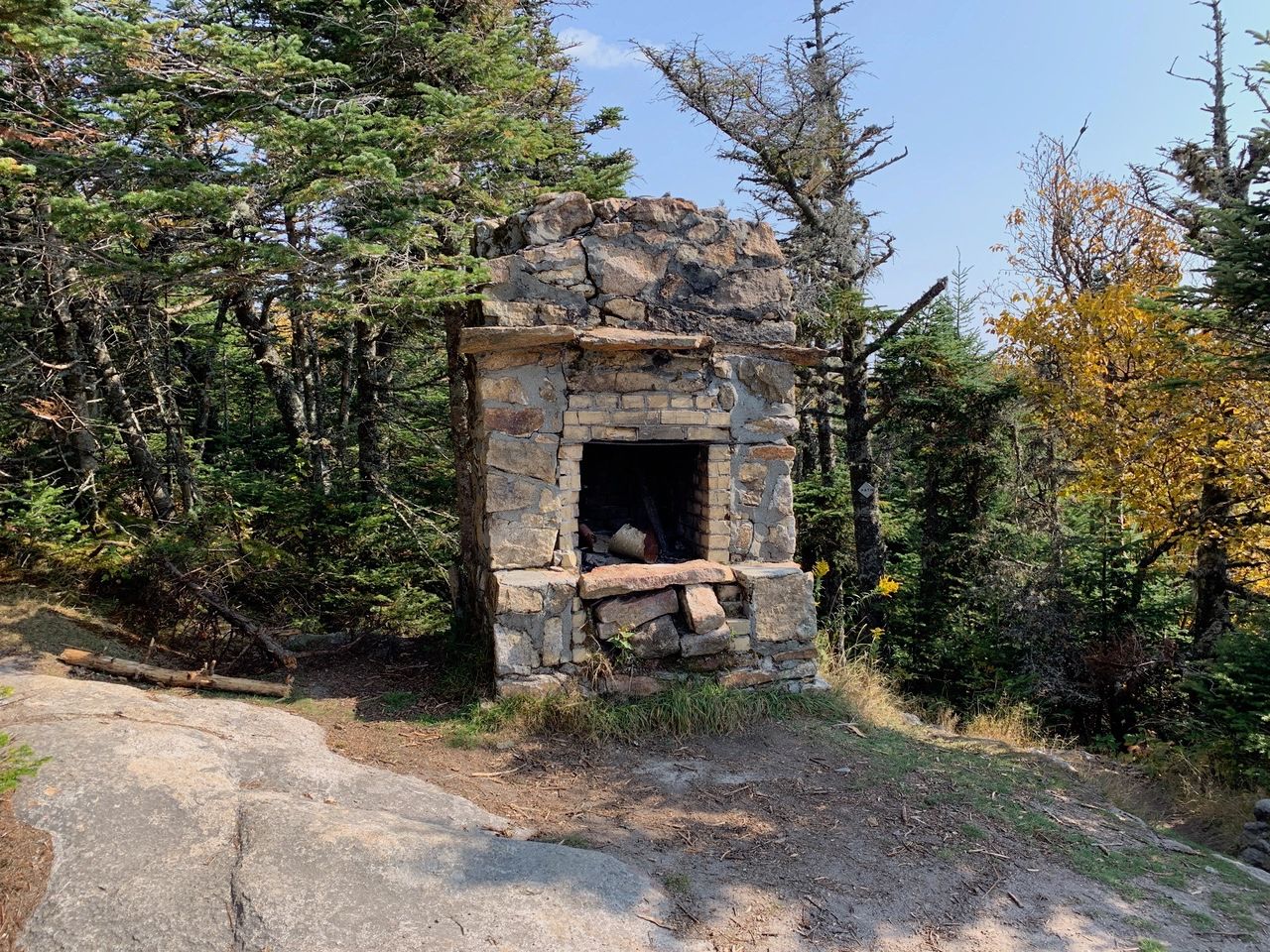 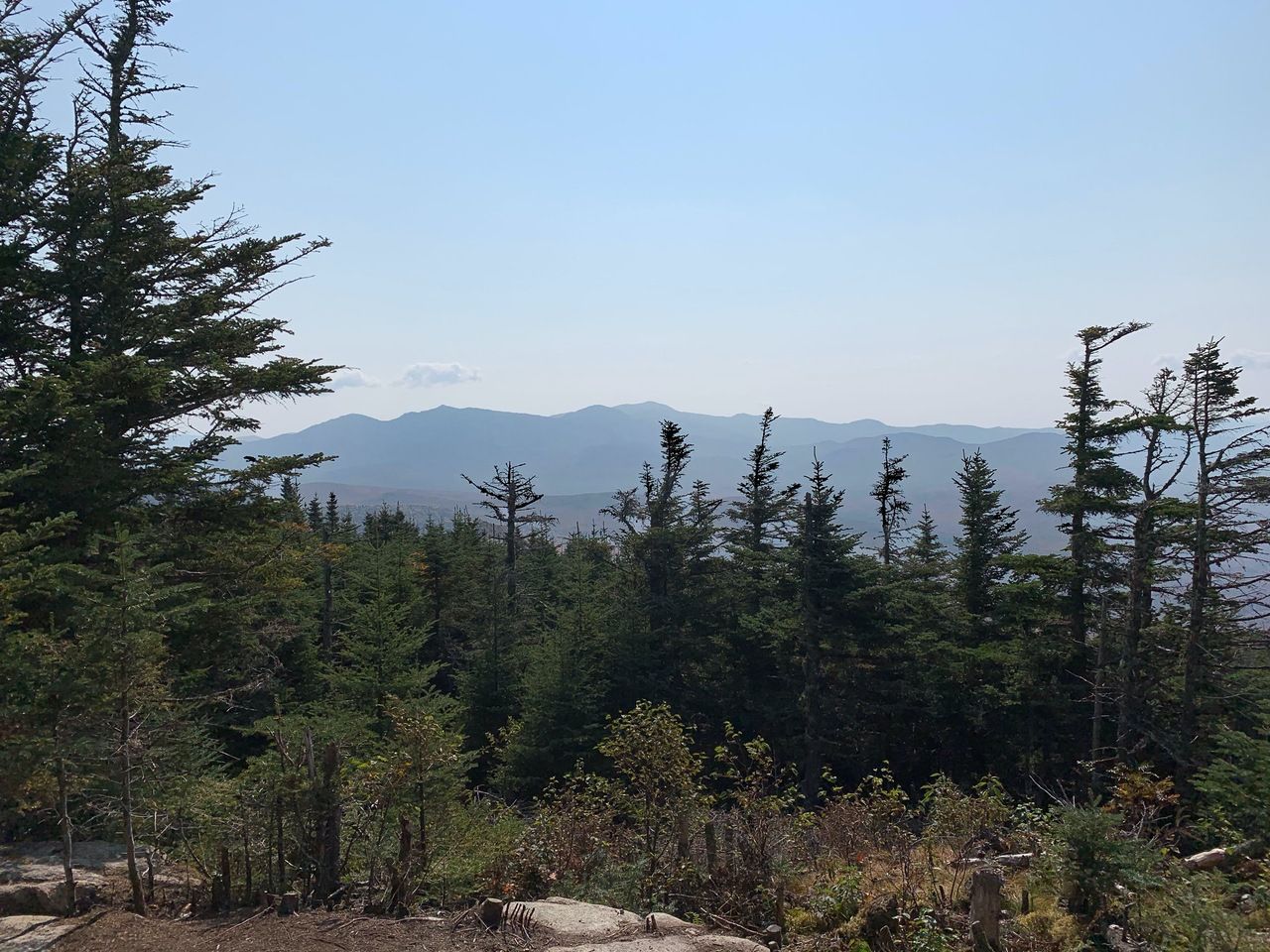 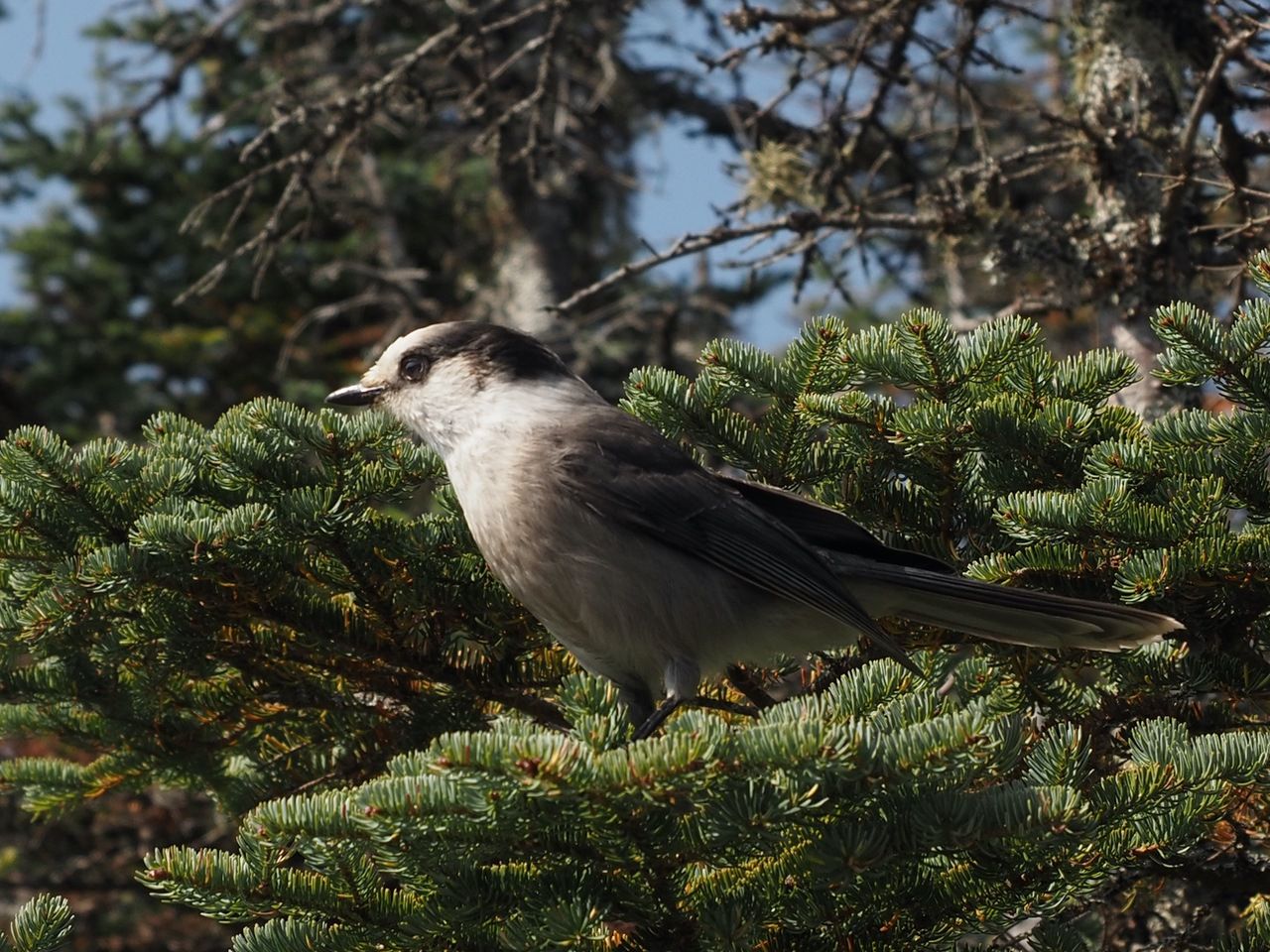 After a snack and a break to kibbitz with other hikers, we headed to the summit of Waumbek, a combination of descent, flat, and ascent. The summit of Waumbek is wooded, but a little past the summit on the Kilkenny Trail, there is a view of mostly the Presidential Range, similar to the view at Starr King. 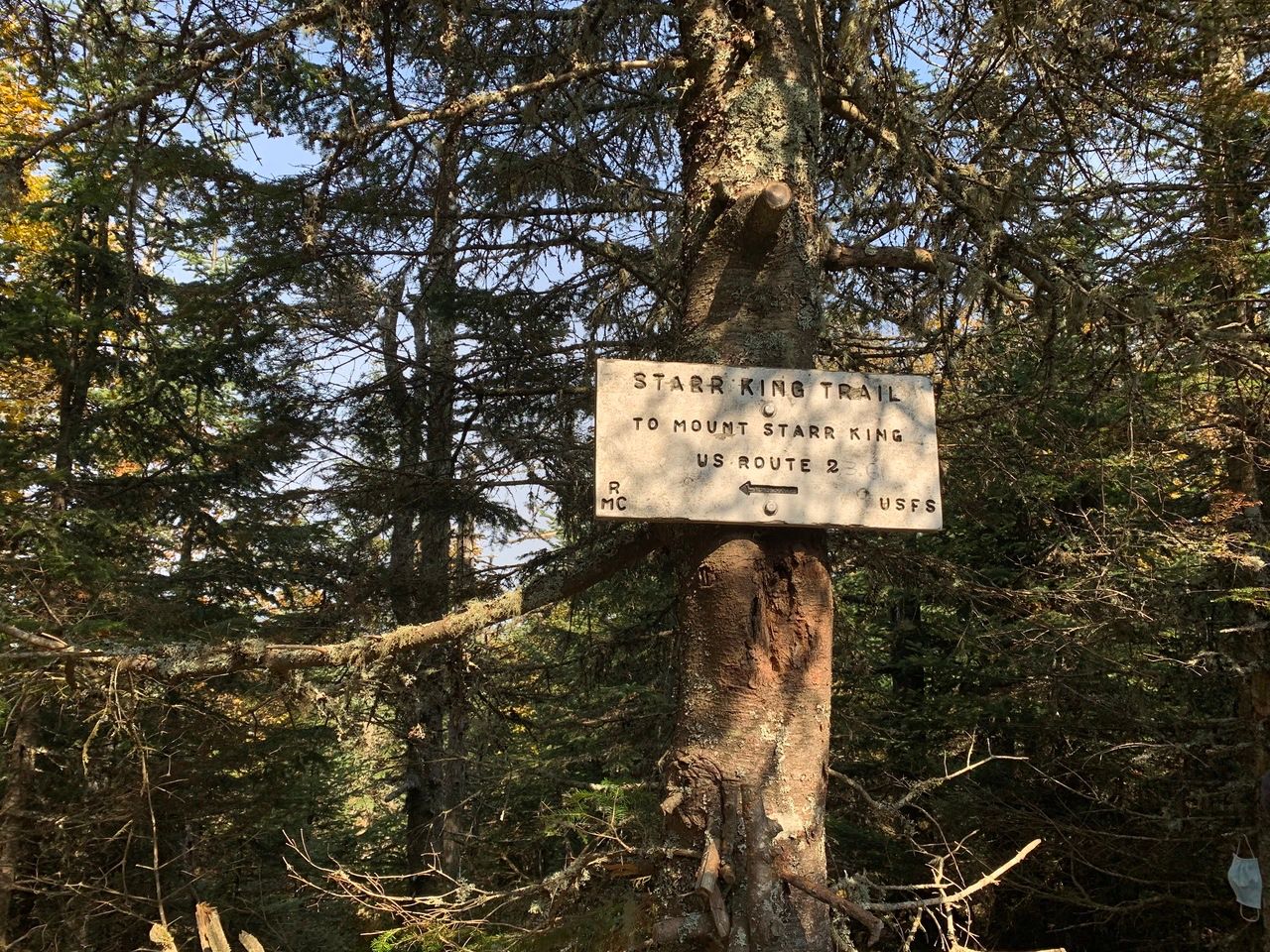 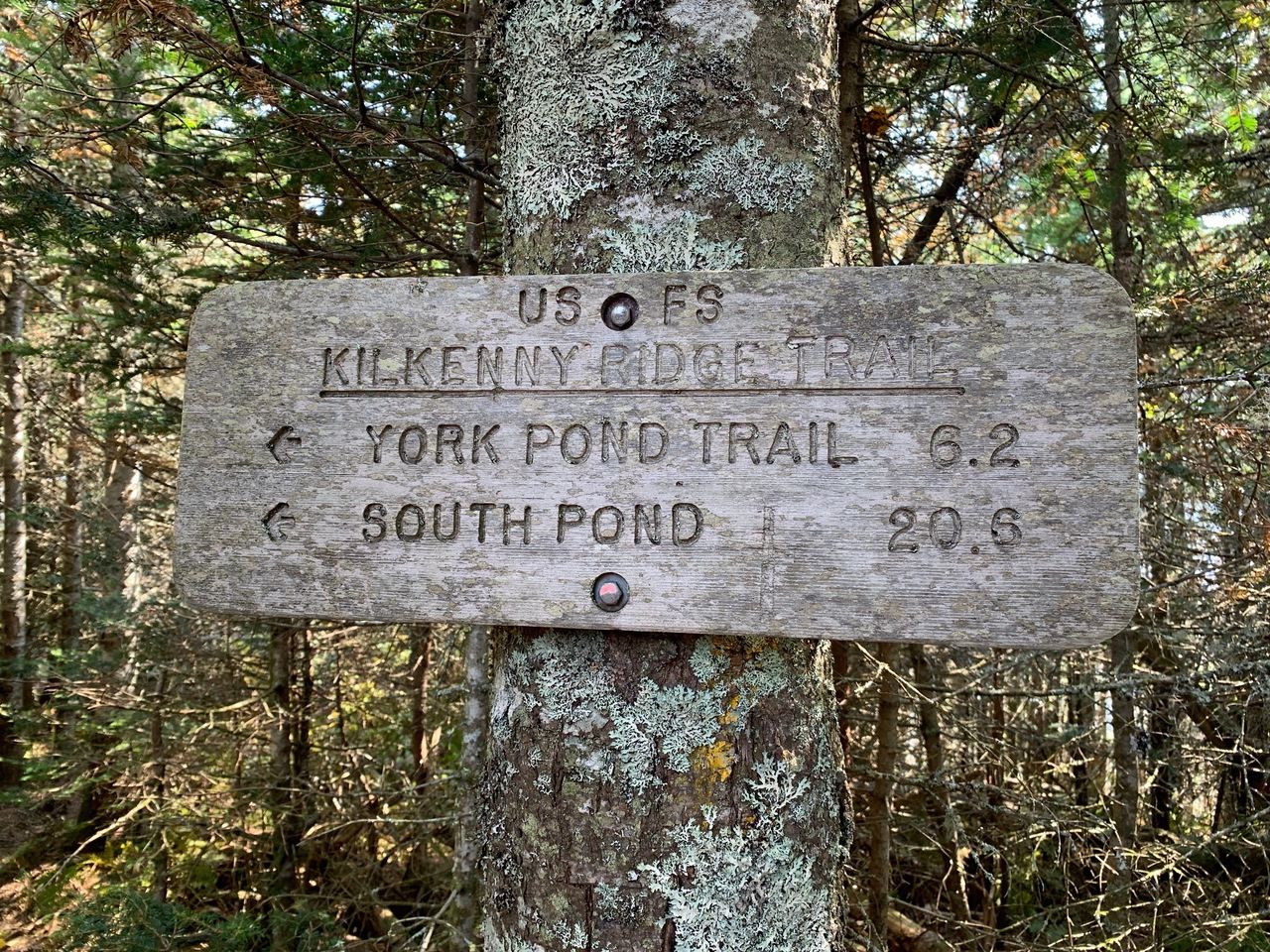 We had lunch, and headed back the way we came. The total hike (about 7.2 miles), including two stops at Starr King and the one at Waumbek, took us about five hours. 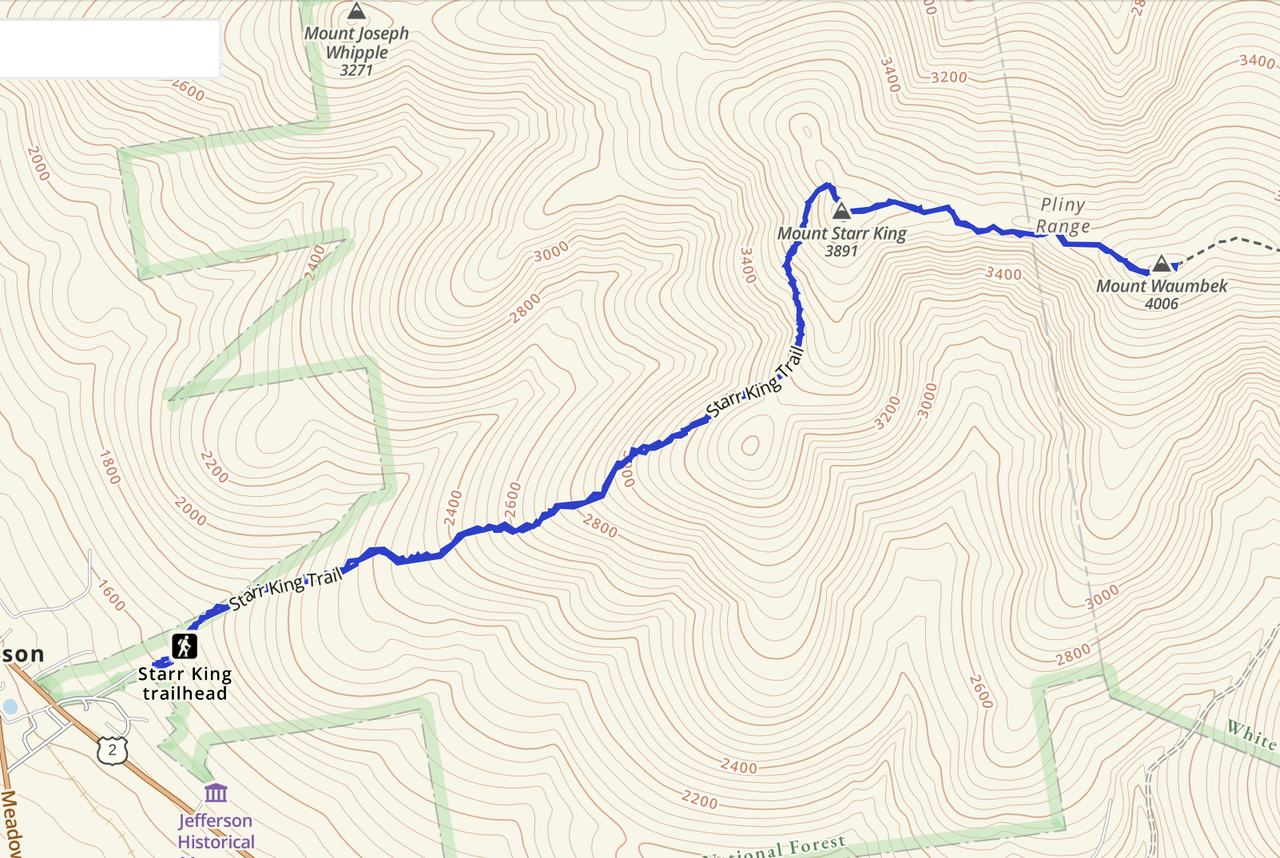 Published by Eileen and Larry Samberg on September 26th, 2020