We did this hike once before, in 2010, shortly after we learned about it, but we weren’t blogging back then. First, the back story:
On the afternoon of January 14, 1942, a Douglas B18-A bomber with a crew of 7, took off from Westover Air Field, near Chicopee Falls, Mass. The crew's mission was to patrol for German U-Boats, 250 miles into the North Atlantic. They did not report any sightings, and several hours later, a little before 4:30pm, turned the plane around to head back to their base. Weather conditions were much worse than when they took off and they flew into a strong headwind. When the plane reached the coastline, the crew tried to get bearings on the radio, but were unable to because of static. They estimated it would take three hours to reach Westover, and they proceeded, flying on instruments at 4,000 feet. That altitude was chosen as it would keep the aircraft under the overcast and clear of obstacles between the coast and Westover.
The night was black and visibility poor. The wind was much stronger than the crew believed, and atmospheric conditions meant that they were unable to use any beacons. There was no celestial navigation equipment on board and no light in the drift meter. They were in total darkness. The pilot and co-pilot changed off every half hour. When they crossed the shoreline, they thought they were south of Boston, and turned north, expecting that they were heading towards Westover. But the combination of circumstances threw all their calculations off and they were actually flying north over Lake Winnipisaukee.
No mountains were visible, until at about 7:40pm, the co-pilot, Lt. Woodrow Kantner saw what he first thought were dark clouds. He turned on his landing lights and saw their error. He tried to warn the pilot, Lt. Anthony Benvenuto, to pull up. Benvenuto couldn't hear him and Kantner pulled up. But it was too late and the men could not prevent the disaster. The plane hit a downdraft, stalled, and flew in through trees and crashed in deep snow on the side of Mt. Waternomee. Both wings and engines were sheared off and the top deck was ripped off. Fuel was dripping and a fire broke out. Five of the crew were able to exit the plane. Two of the crew, in the rear of the aircraft, could not and died when the plane exploded a few moments later. The subsequent Army investigation credited Kantner's pulling up the nose with preventing the plane from crashing nose first, and probably saving the lives of himself and the four other crew members.
Residents in Lincoln and Woodstock heard the crash and saw the fire. Telephone calls went out to the State Police, the Forest Service, the Army and civilian volunteers. Incredibly, the first of the rescue crews started up the mountain at 8:15, just about a half hour after the plane went down. Lincoln's Dr Handy was on the scene, as was Sherman Adams, the Parker-Young Company's "wood boss" (and later Governor of New Hampshire), along with about 50 others. It took the first crew of the rescue squad about three hours, on snowshoes, to reach the crash site. They rounded up the 5 injured survivors, administered first aid, and built fires to keep the injured warm. Lincoln Selectman Charles Doherty and Adams arrived with a team of woodsmen who had blazed a trail and brought toboggans. Dr. Handy put a splint on a broken leg and three of the injured were placed on the toboggans and started down the mountain. They arrived at the roadside about 2:00am. The toboggans went back up and at about 4:00am started back down with the other two survivors, reaching the road at about 10:00am. The survivors were taken to the Lincoln hospital and 4 were later moved to Manchester.
One nice thing about the hike is that it starts only about 15 minutes outside of Lincoln on Walker Brook Road, a logging/fire road on NH 118 about 1 mile (or so) south of the intersection with NH 112. Walker Brook Road is only about 5 car lengths and is then gated. The total hike is about 3 miles each way and gains about 1300 feet of elevation. Since most of the elevation is gained in the second half of the hike, the first half is easy and the second half is quite a bit steeper. This is not an official trail so much of the walking is “guided" bushwhacking.
Follow Walker Brook Road (tire tracks) for about 1.3 miles. The starting elevation is about 1220 feet. The first half of this is completely flat and the second half climbs gradually but steadily. At 1.3 miles it enters a large circular open field (elev. 1550 ft.). Follow the trail around to the right past a small cairn back into the woods, turn left, and you shortly arrive at Walker Brook. 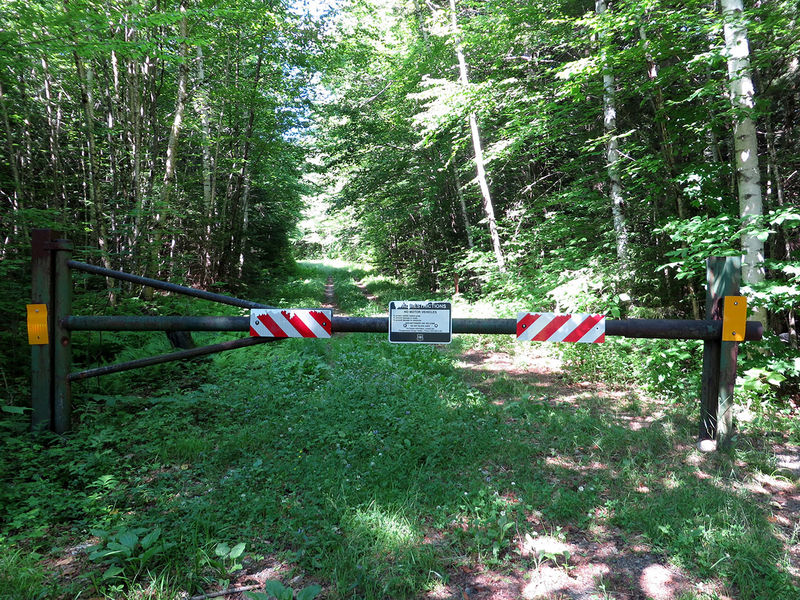 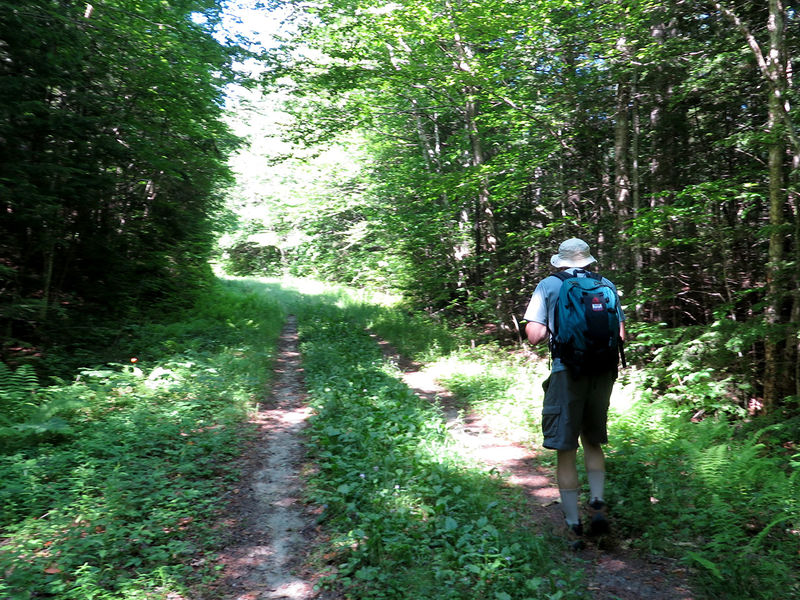 Here is the cairn in the large circular field. The trail continues into the woods. 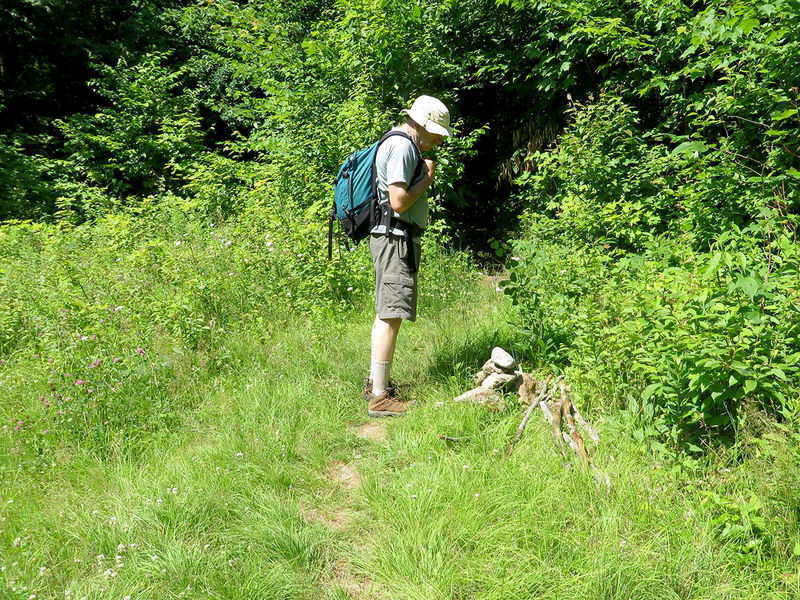 Rather than crossing the brook, follow the brook upstream about 750 feet. This path is marked with occasional nailed markers and surveyor tape on trees. Cross the brook at the marked spot and walk up a short hill to a flat area. Turn right and follow the flat area parallel to the brook for another 750 feet (at about 1.55 miles in) and then turn left (away from the brook). At this point the trail starts climbing and continues to climb until you reach the debris field. 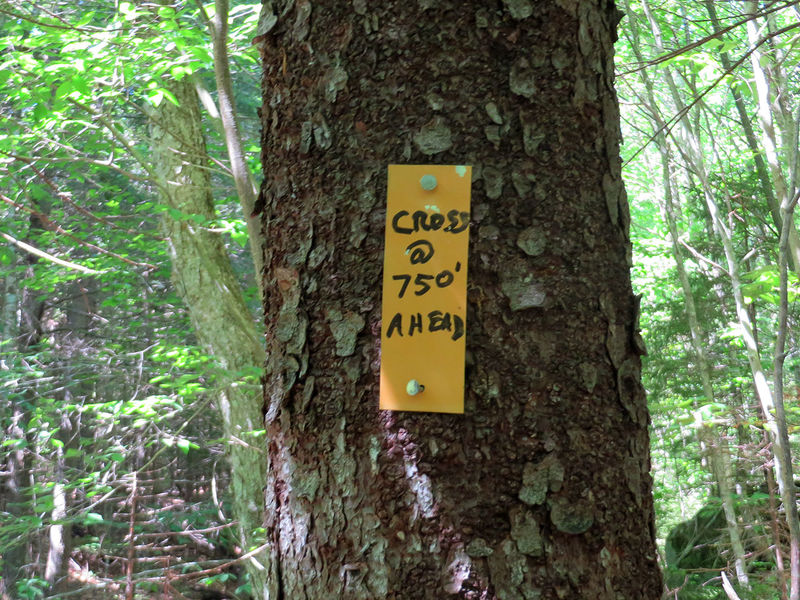 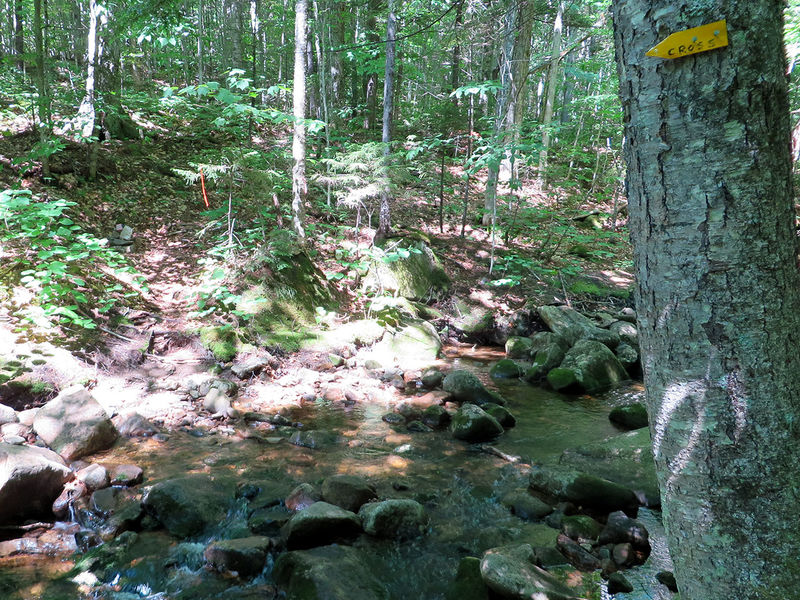 After turning away from the brook there is a good view of a waterfall on the right side. 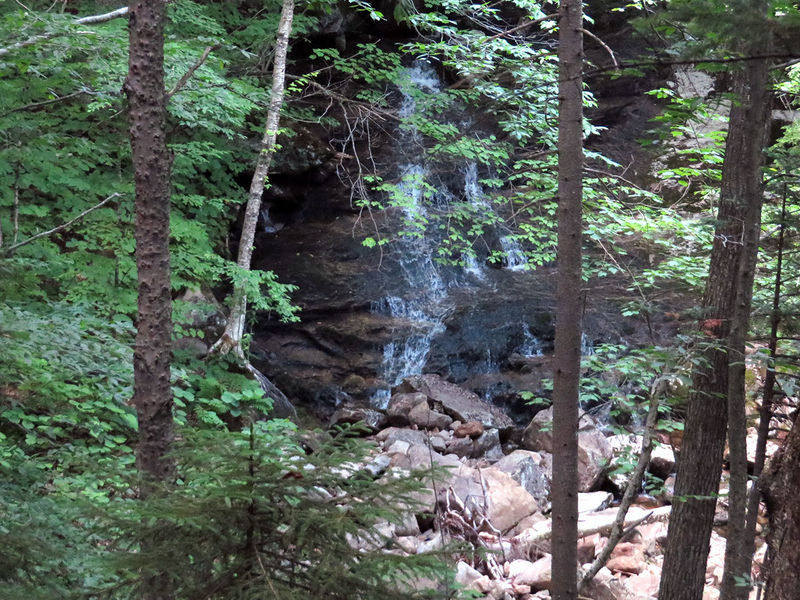 At this point the trail climbs steadily. It is also a bit trickier to follow. Most of the time it is clear where the trail is (it is worn enough) but sometimes not, but amazingly, every time you needed to find the trail there was a piece of orange surveyors tape hanging from a branch (so bring someone who is not color-deficient). So care is needed but there are hints. (Not all of them were as obvious as this one.) 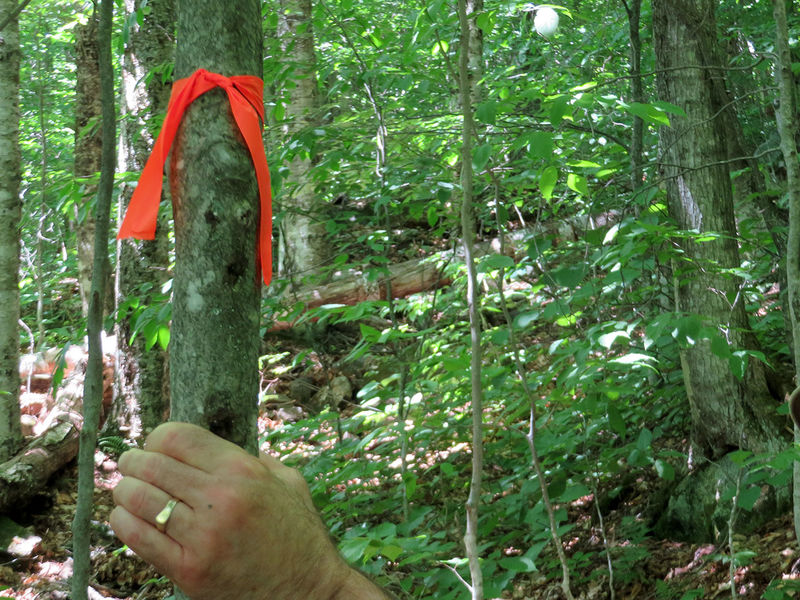 At about 2.7 miles and 2600 ft. elevation, you come across the first piece of debris. One of the engines. 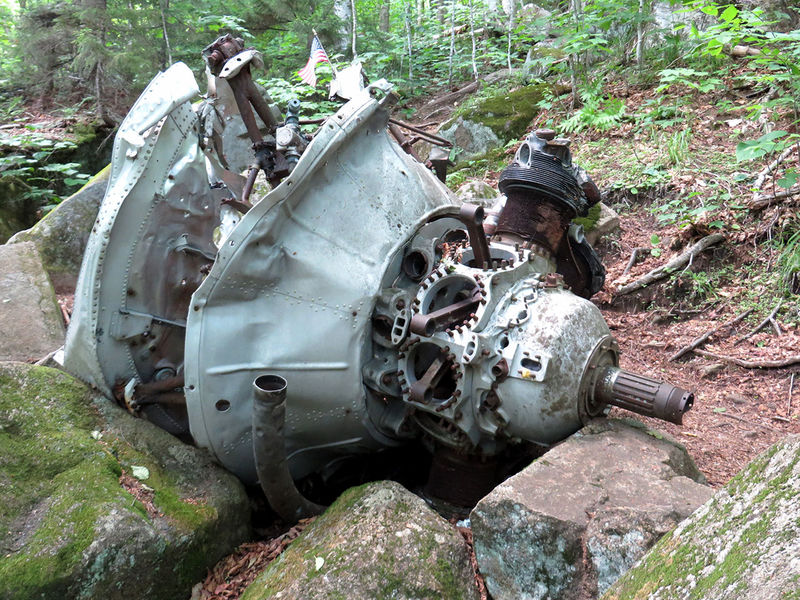 From this point you just wander around looking at various pieces of the plane and plaques commemorating the crash. The last survivor died in 2008. 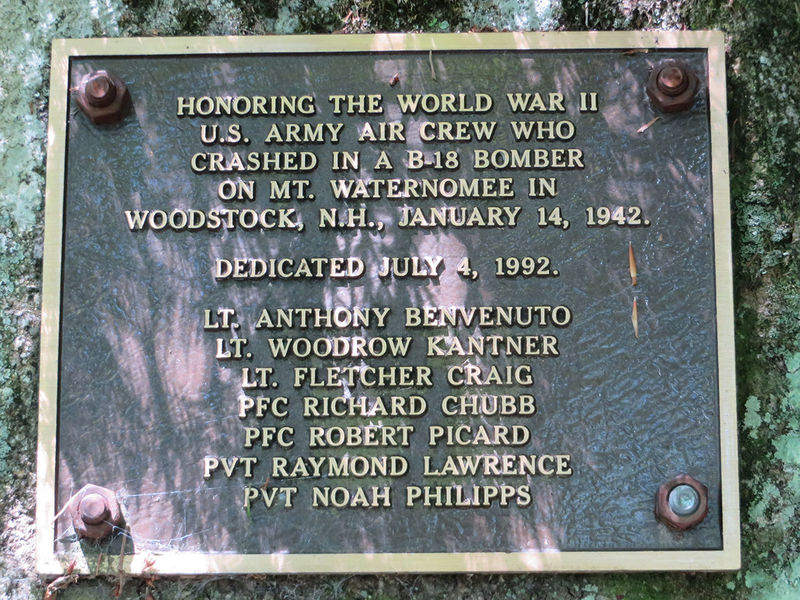 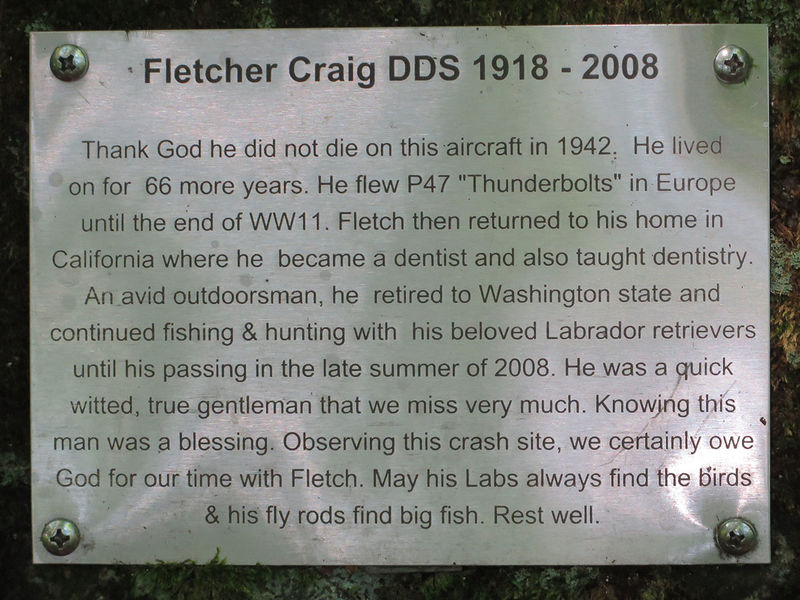 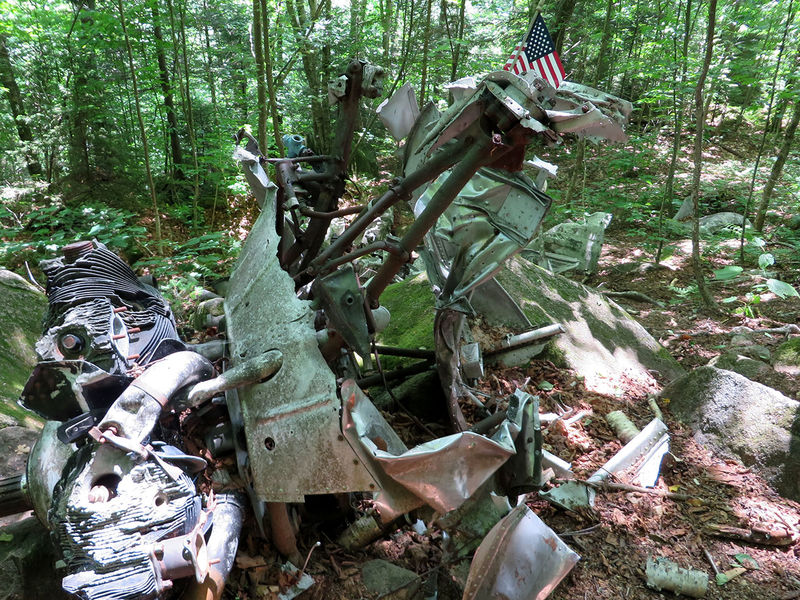 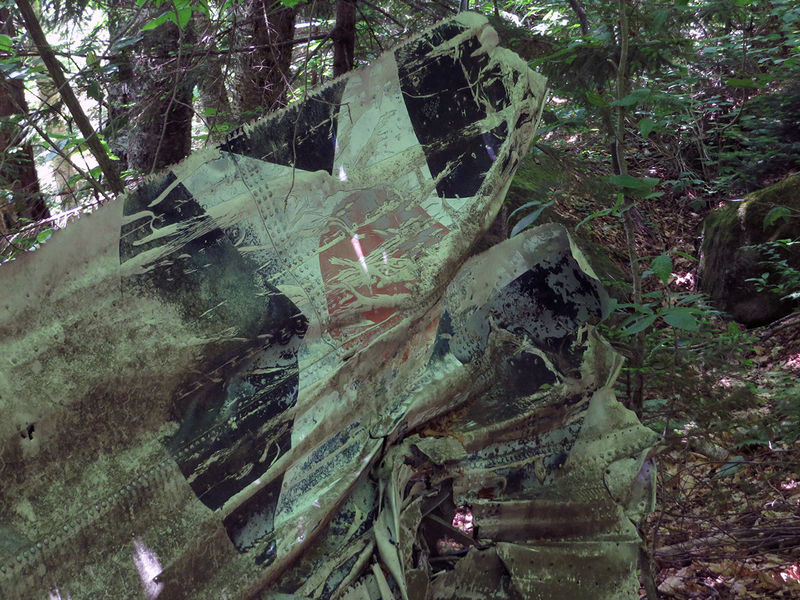 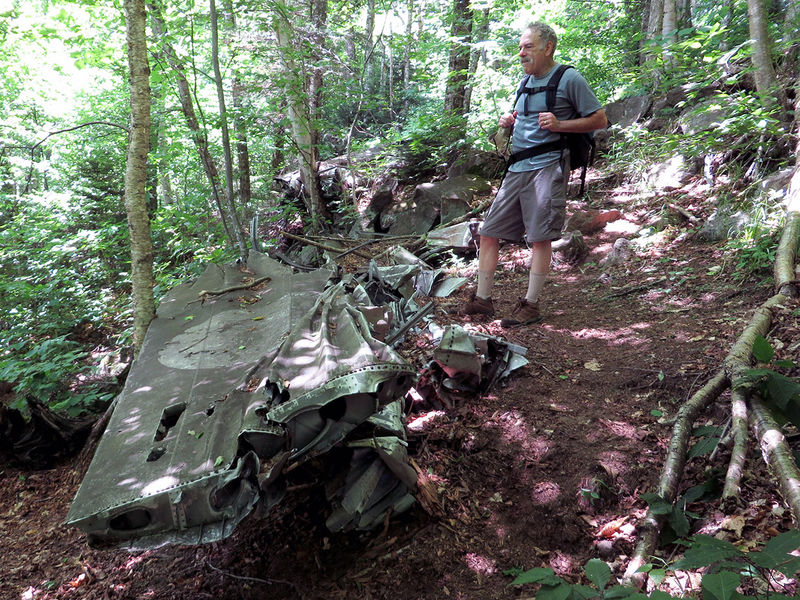 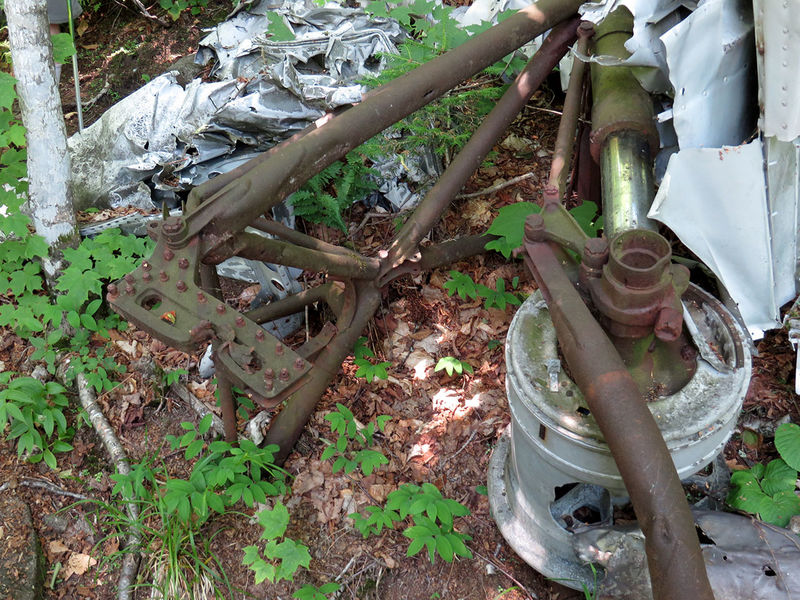 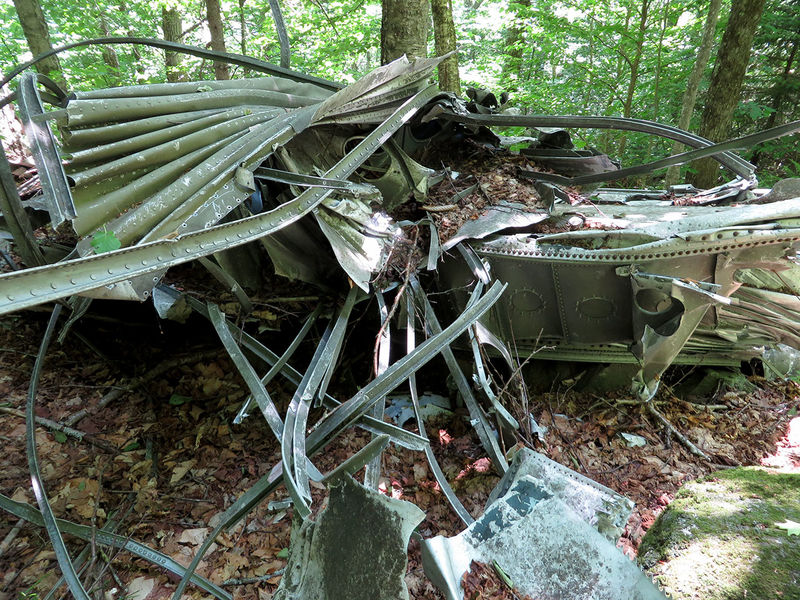 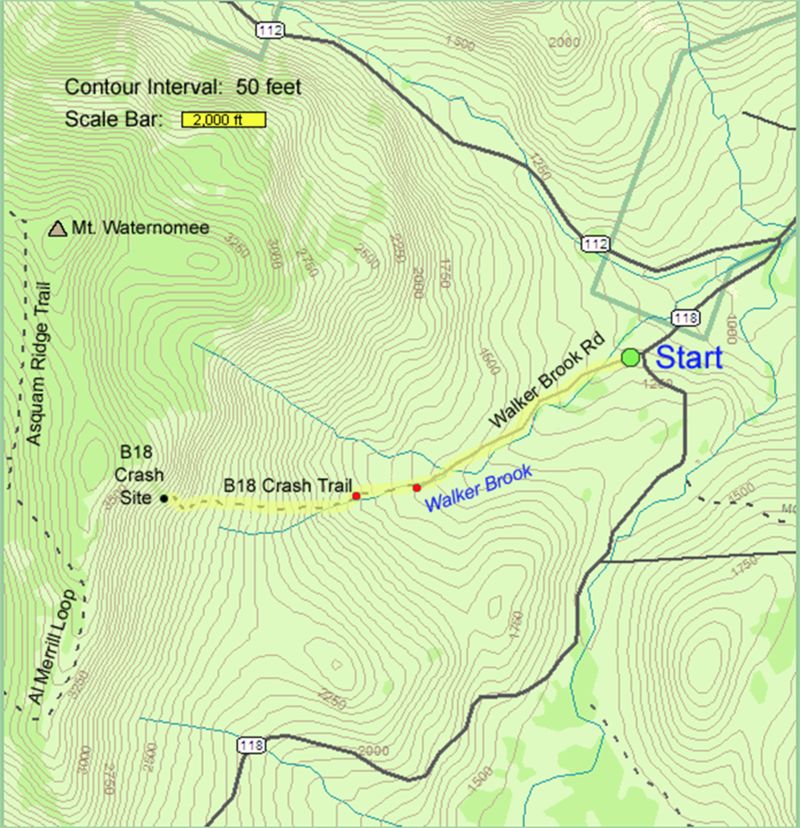 Published by Eileen and Larry Samberg on July 5th, 2018