This is one of the more spectacular overlooks in the Whites that is not at the top of a mountain. The Zeacliff Overlook is a outcropping over the notch between Zealand Mountain and Whitewall Mountain.
The first part of the hike is to Zealand Falls Hut. We’ve been to this hut numerous times and 🔗 we blogged it last year 🔗 so we will not repeat it here. The hike to the hut is an easy 2.7 miles. The only steep part is the last 0.2 miles, rocky and finishing with rock stairs up to the hut. The hike that we did last May was harder than normal — the water was higher and the water crossings were a bit more difficult (the ones that didn’t have bridges). This time everything was pretty normal with a few short rock hops here and there.
The hike follows the Zealand Trail from the parking area at the top of Zealand Road.
It’s still one of the prettiest hikes around. 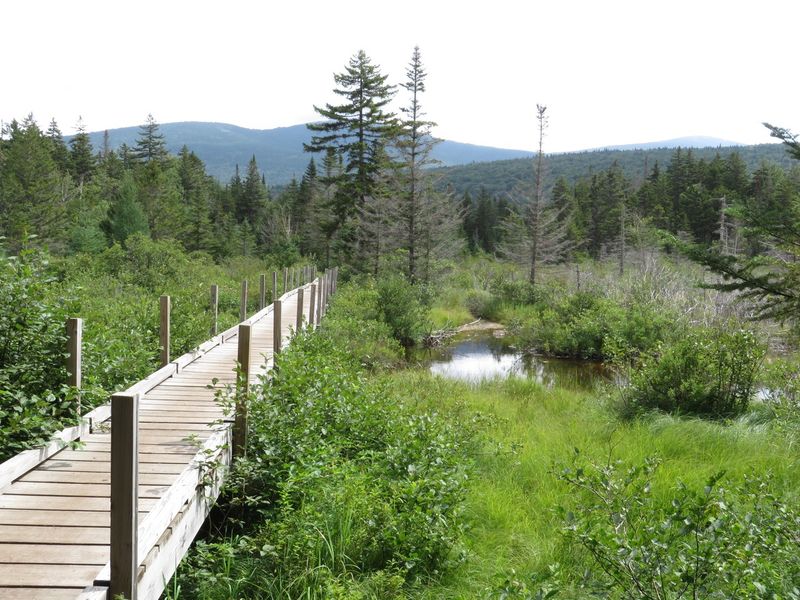 And one of the prettiest spots for flowers. Here is a Monarch butterfly on a Joe-Pye Weed. 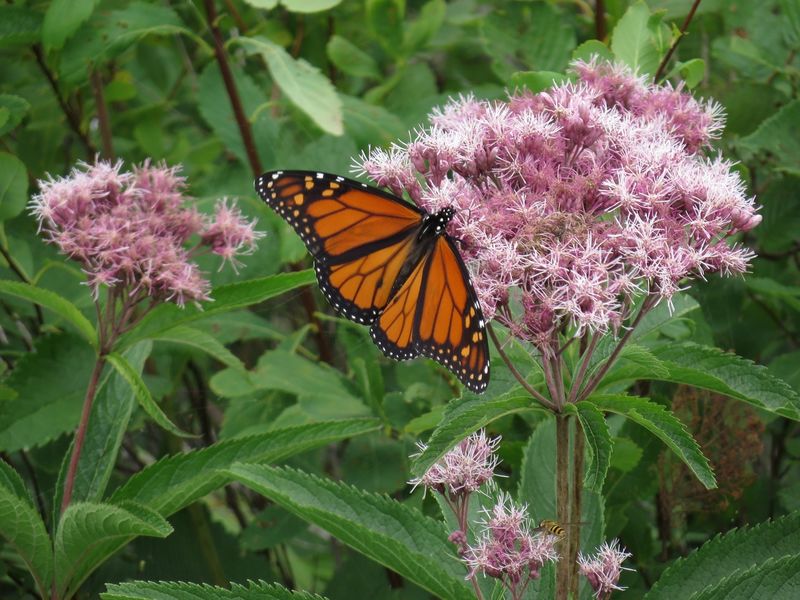 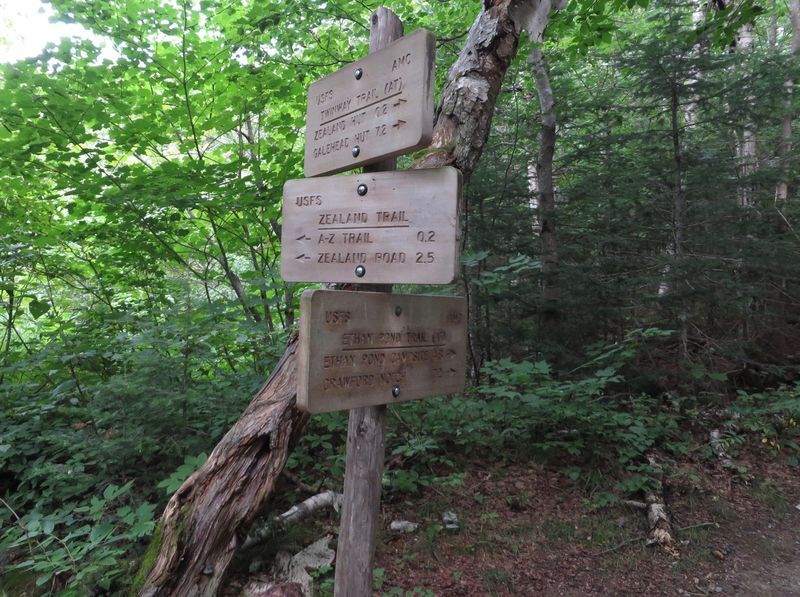 Continuing on the Twinway from this intersection the hut is reached in about a quarter mile.
Today we reached the hut in about an hour and a quarter. This is good time for 2.7 miles especially since it included several stops for flower pictures. The elevation gain is only about 600 feet, starting at about 2,000 feet and ending at about 2,600 feet.
After relaxing at the hut for about 20 minutes, we continued south on the Twinway. 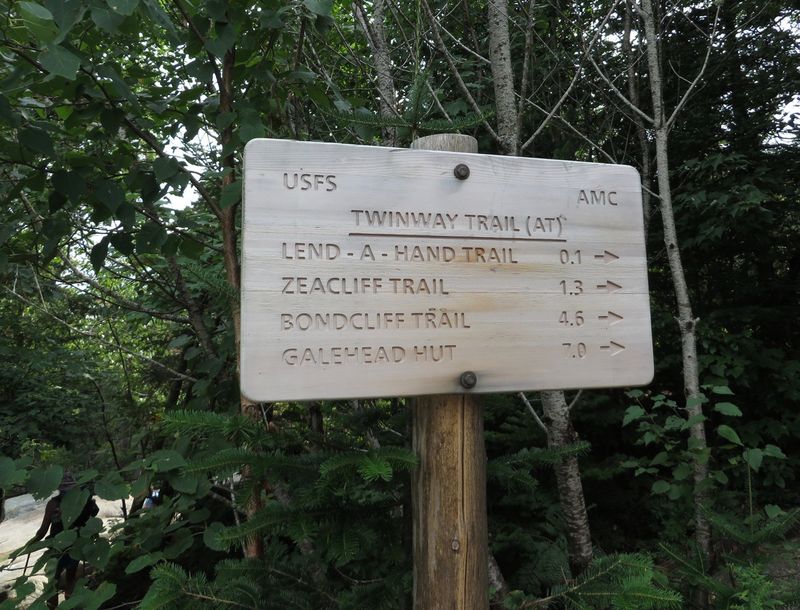 It begins climbing almost immediately. It crosses the stream feeding Zealand Falls (a branch of Whitewall Brook) about 0.2 miles from the hut. 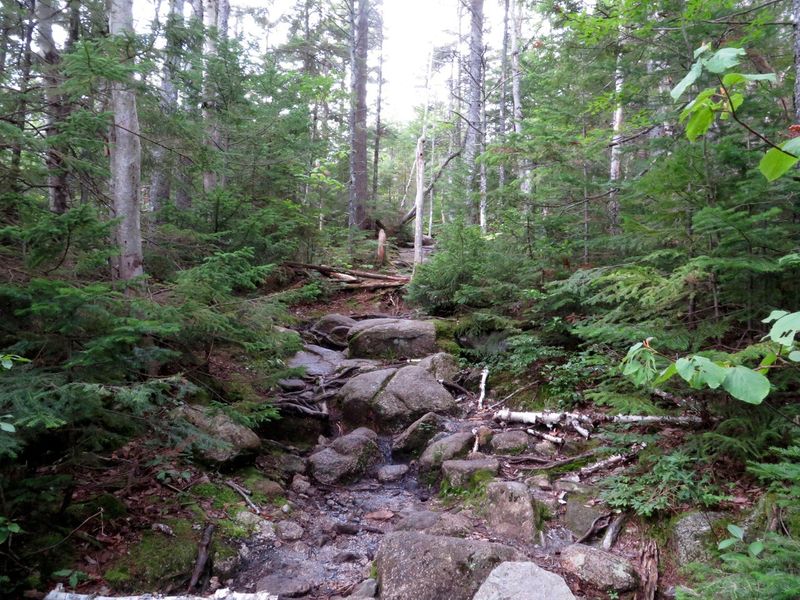 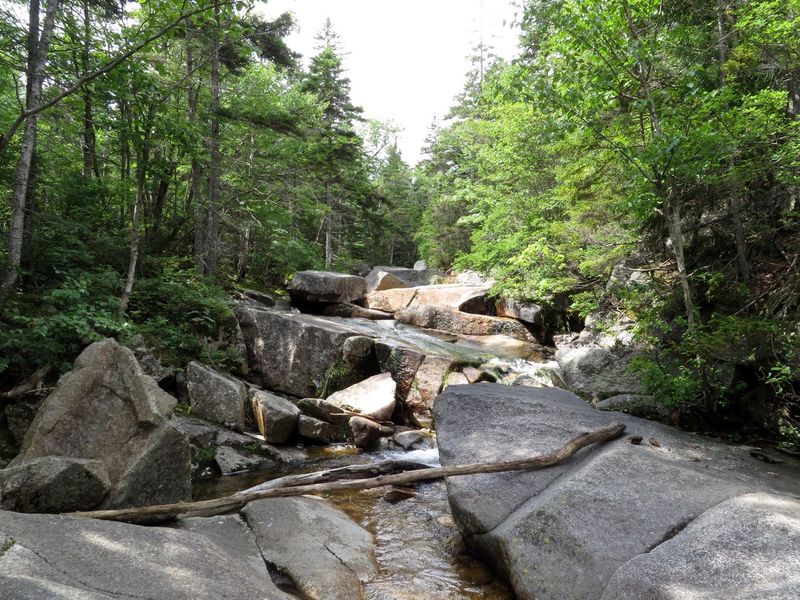 At this point the trail continues climbing steady on a fairly rocky path. 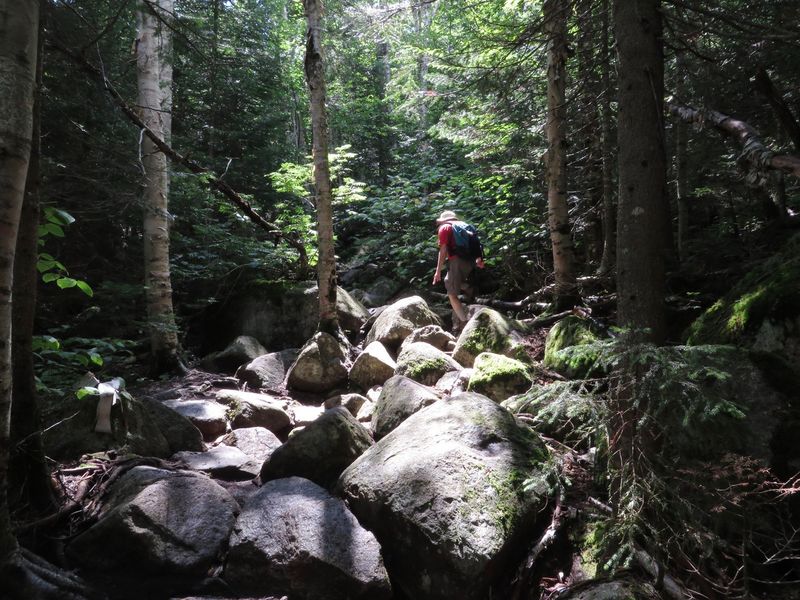 At 1 mile from the hut there is a side trail (on the left) to the overlook. The trail climbs 1100 feet in this mile, so it is a steep walk (we consider anything more than about 800-900 feet per mile to be steep). Following the side trail for about 0.2 miles takes you to the overlook at about 3,700 feet. 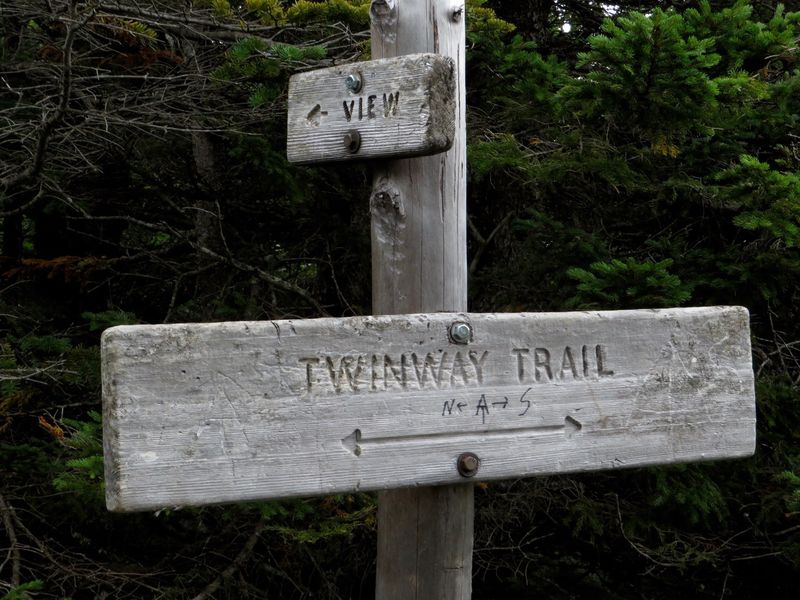 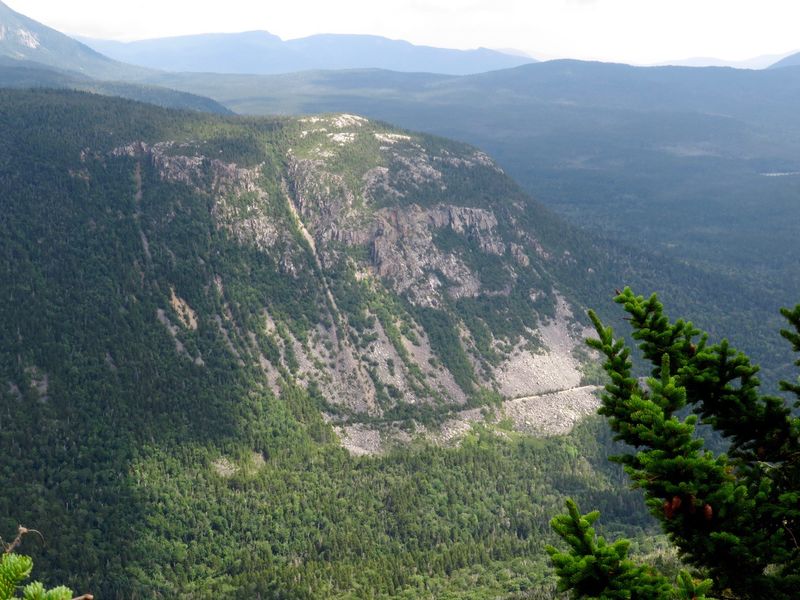 View of Mt. Carrigain to the south. 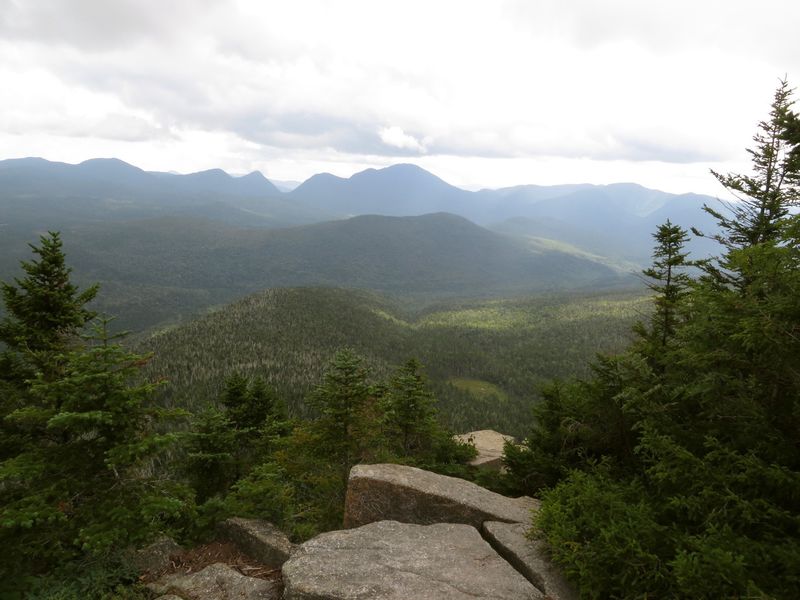 Carrigain again, but with Samberging™. 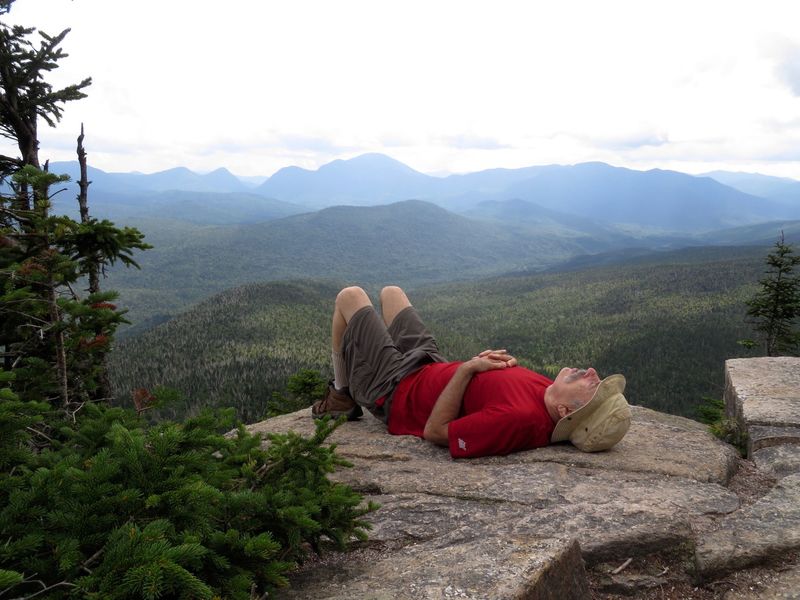 [Fun fact (which I’ve included in other posts). Lincoln is the second largest town in New Hampshire and the boundaries extend much farther than most people realize. At 4700 feet, Mt. Carrigain is actually the highest point in the town of Lincoln — although, officially, it actually shares that title with Mt. Bond at 4698 since the margin of error on the measurements is ±2 feet, so their error bars overlap.]
We relaxed at the overlook for about a half hour and then headed back. The entire trip was about 7.5 miles and we spent about 5.75 hours including breaks at the hut in both directions and at the overlook.
The entire route on Google Earth (north is up, i.e., normal orientation) . The icon next to Zealand Pond is the hut. 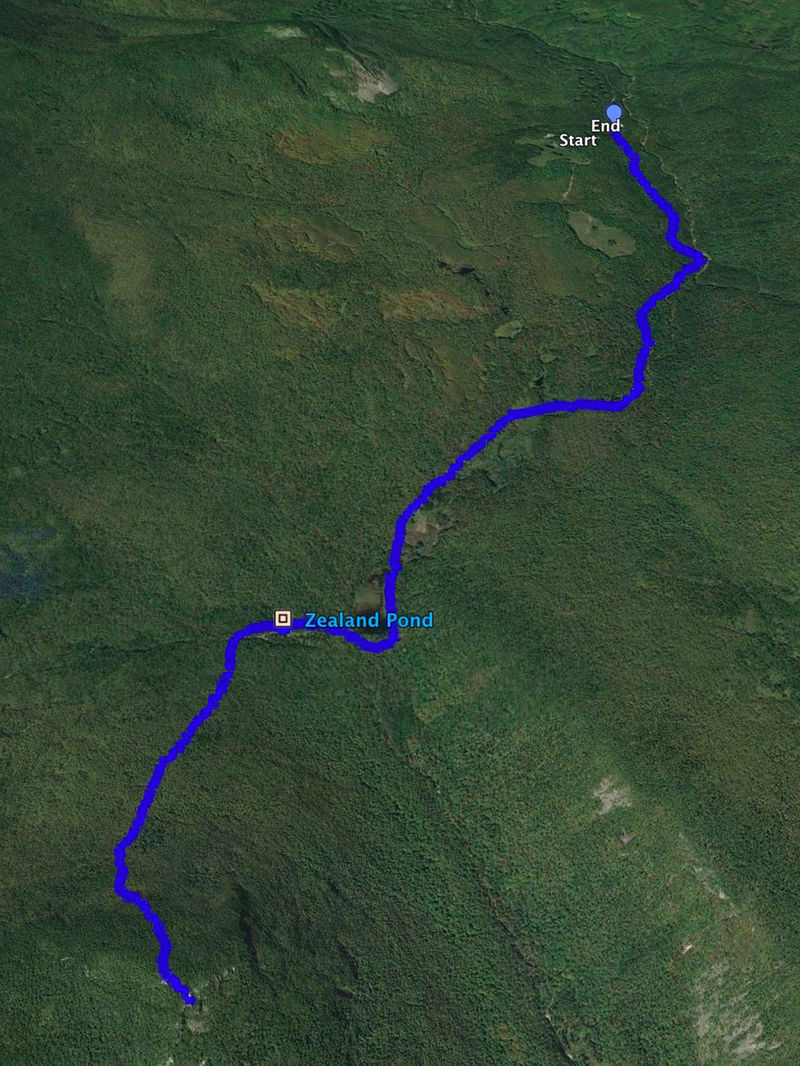 A Google Earth shot of the overlook and Whitewall (north is down in this one). 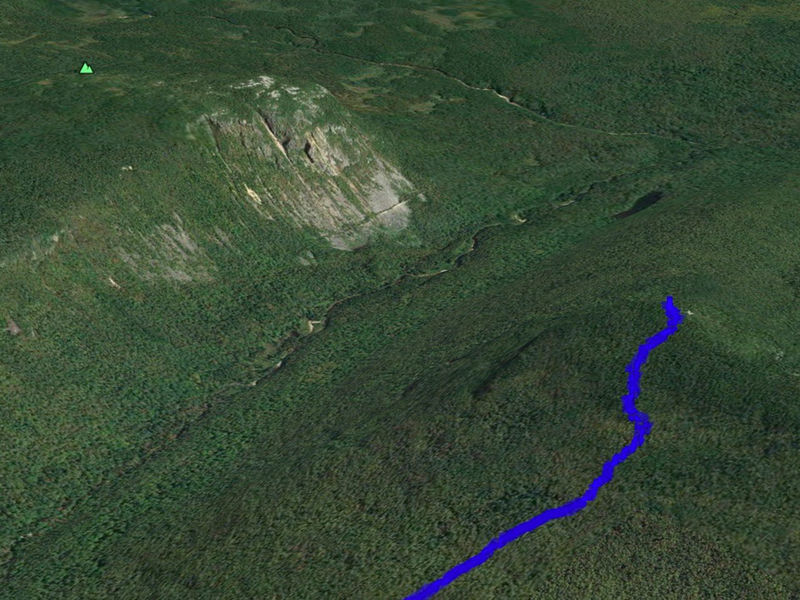 Published by Eileen and Larry Samberg on August 16th, 2018