The Inca Empire's former capital and the continent's oldest continuously inhabited city, Cusco bears the marks of its mixed Spanish-Inca heritage. Colonial and modem buildings incorporate Incan walls, arches, and doorways. Inca descendants speak Quechua, the indigenous tongue.
At the center of the Incan capital was a large plaza called Haukatpata — The Great Inca Square — a portion of which became the Plaza de Armas in colonial times. The Spanish built churches over the Incan temples and ceremonial sites.
We stayed at the Belmond Hotel Monasterio, a sister hotel to the one on Machu Picchu, just around the corner from the Plaza de Armas. 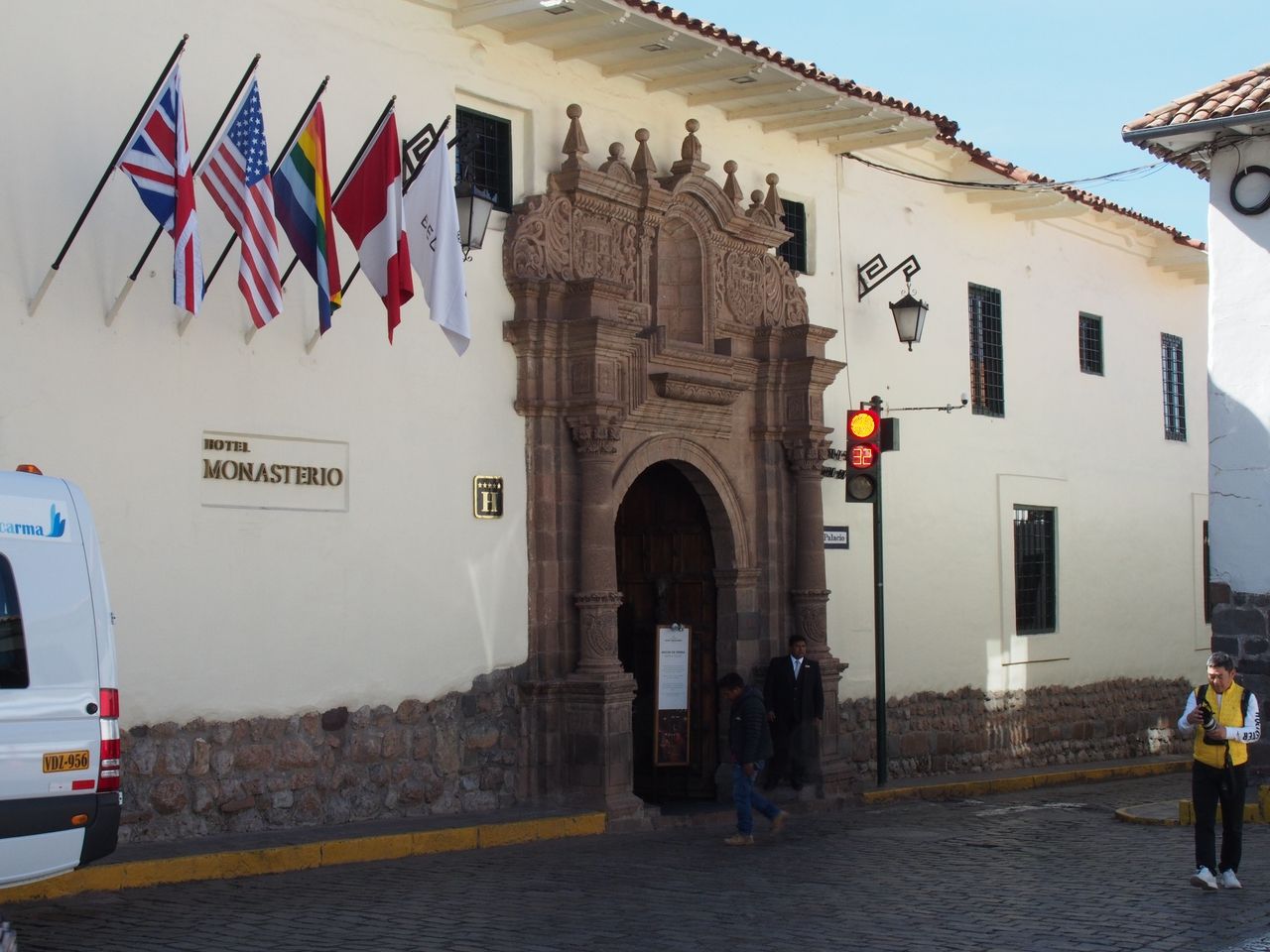 Our room was off this private courtyard area. 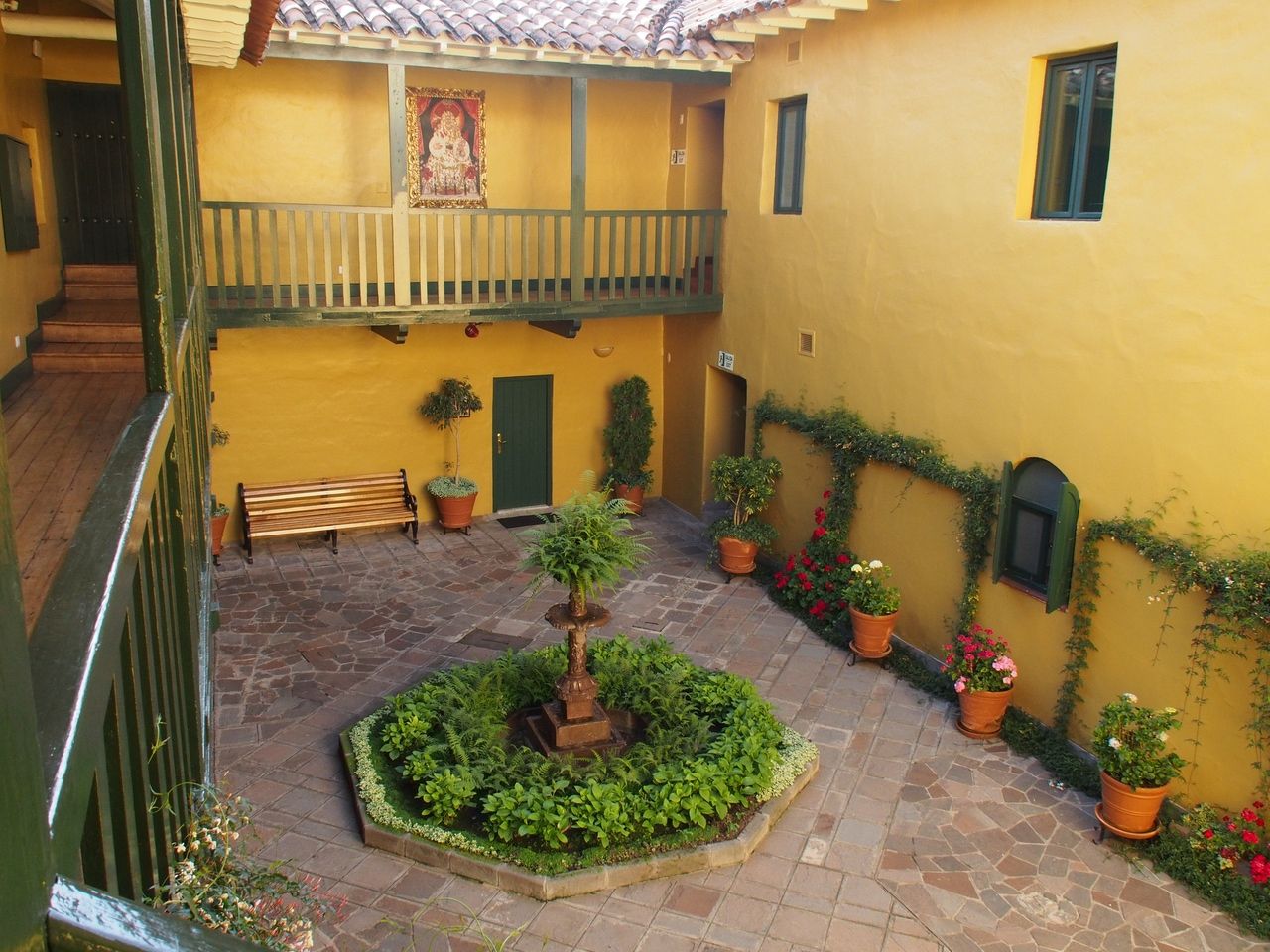 There were two large courtyards at two different levels. This one below our walk from our room to the courtyard with the restaurant. 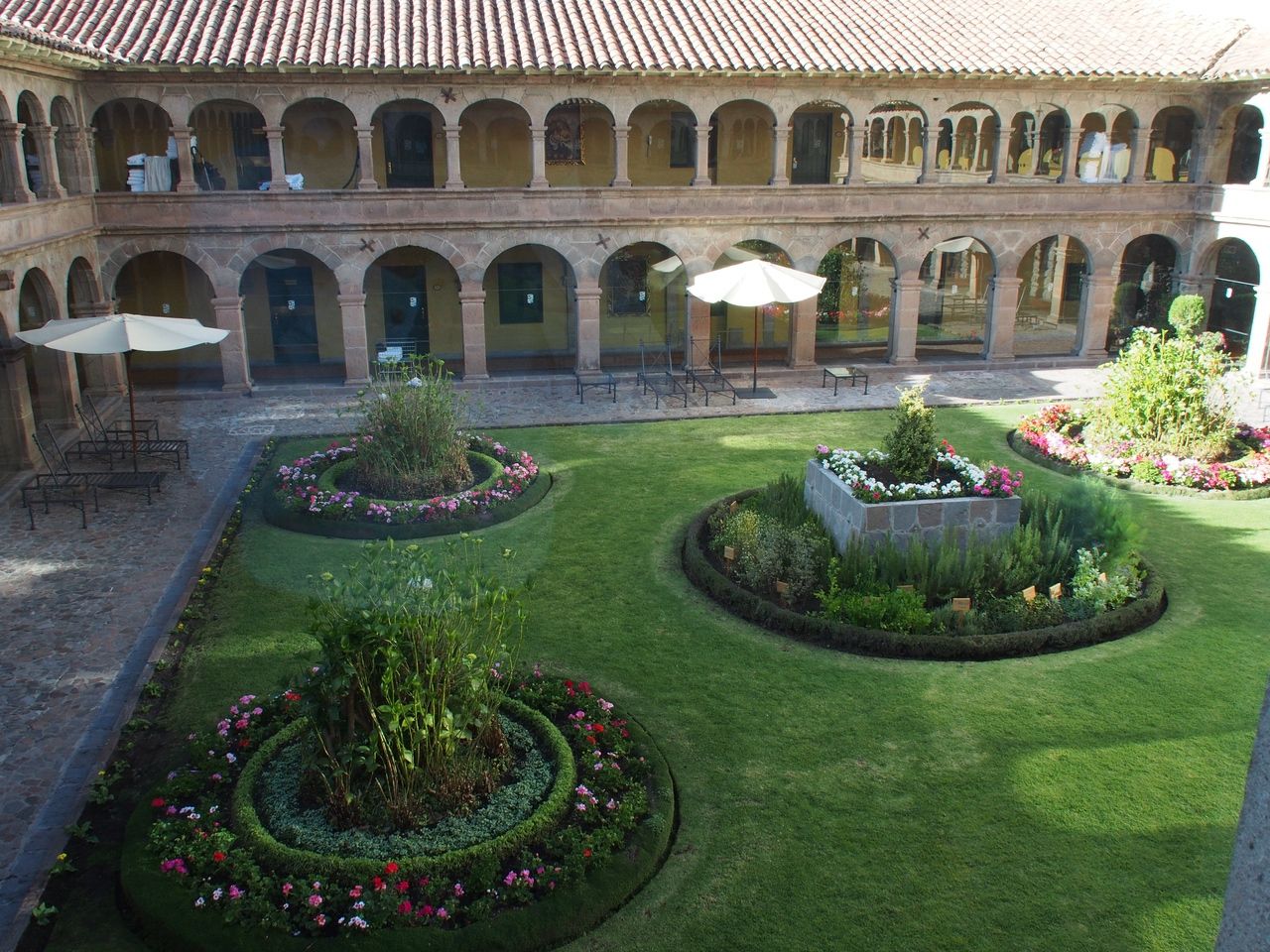 Later we went down to the lower courtyard. 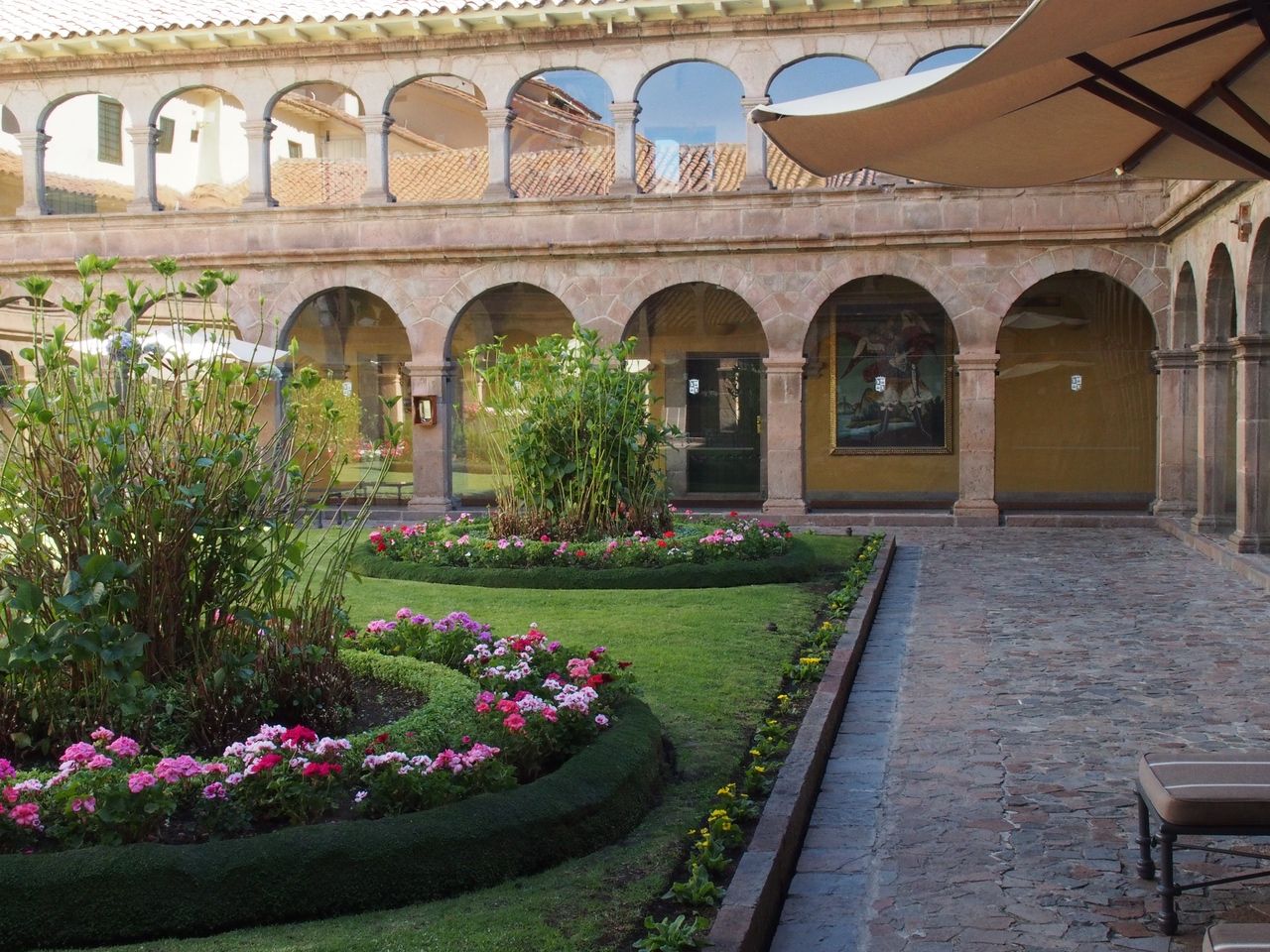 The courtyard with our restaurant where the umbrellas are. 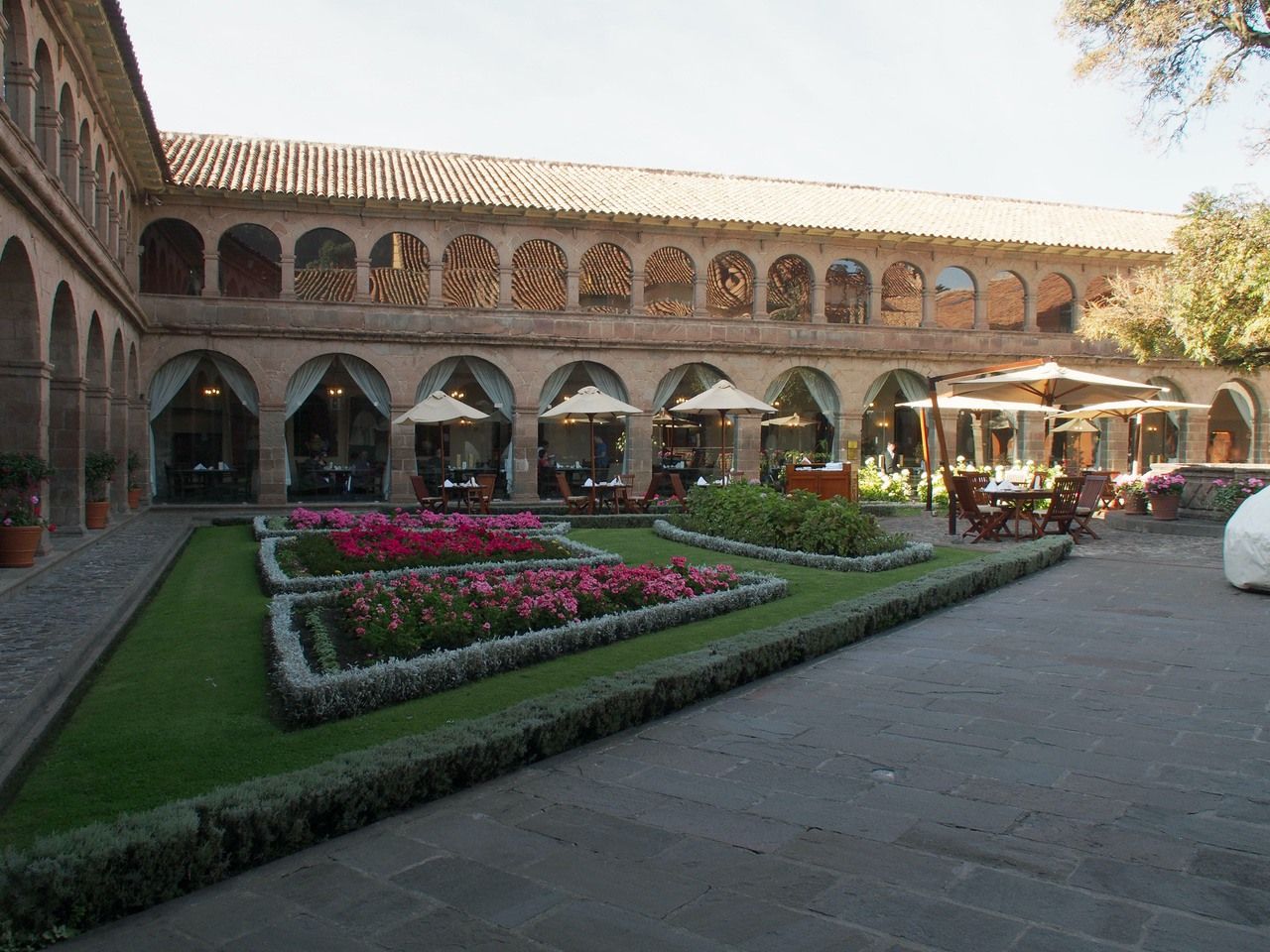 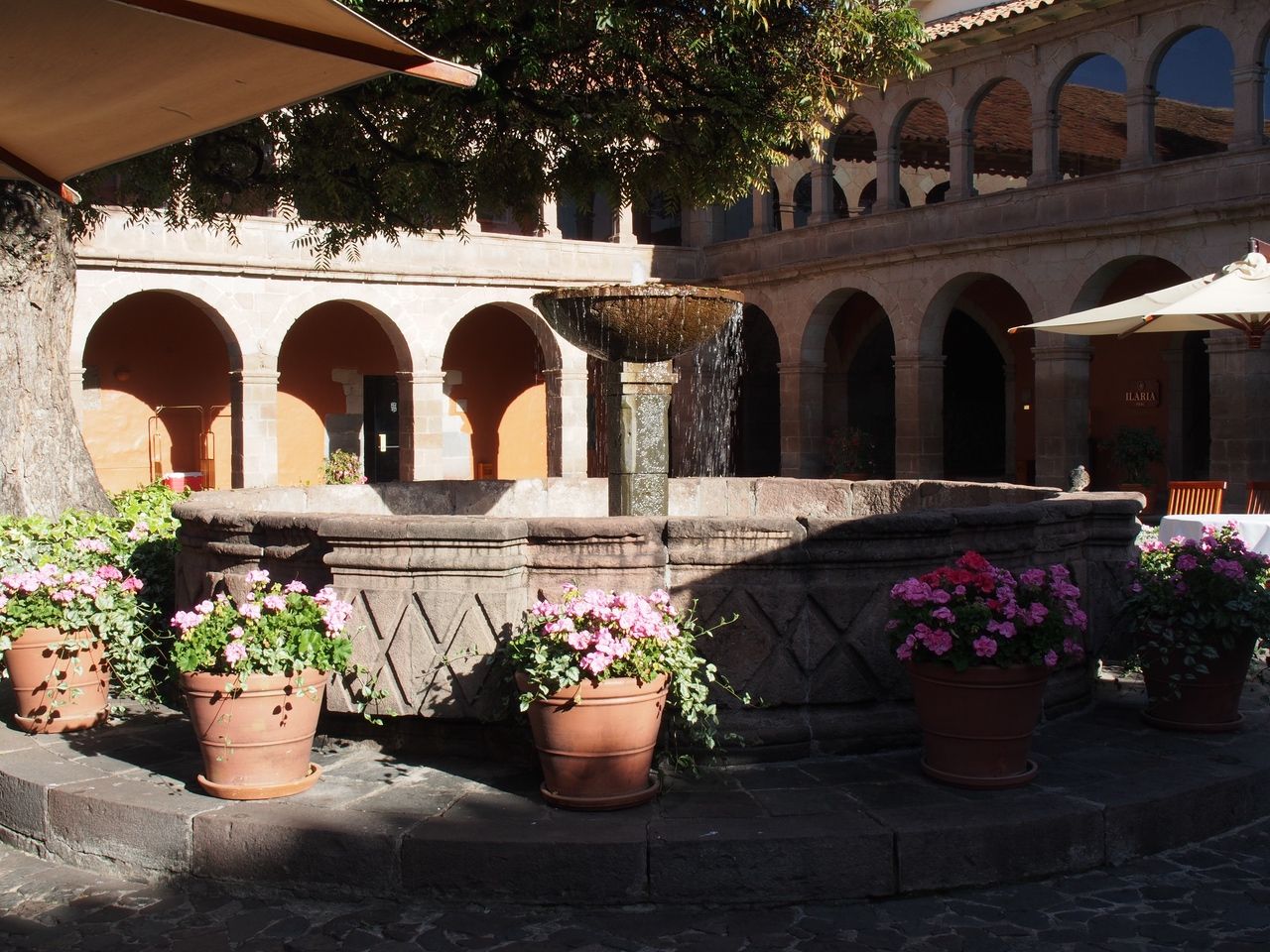 Managed to avoid these tempting sweets at breakfast. 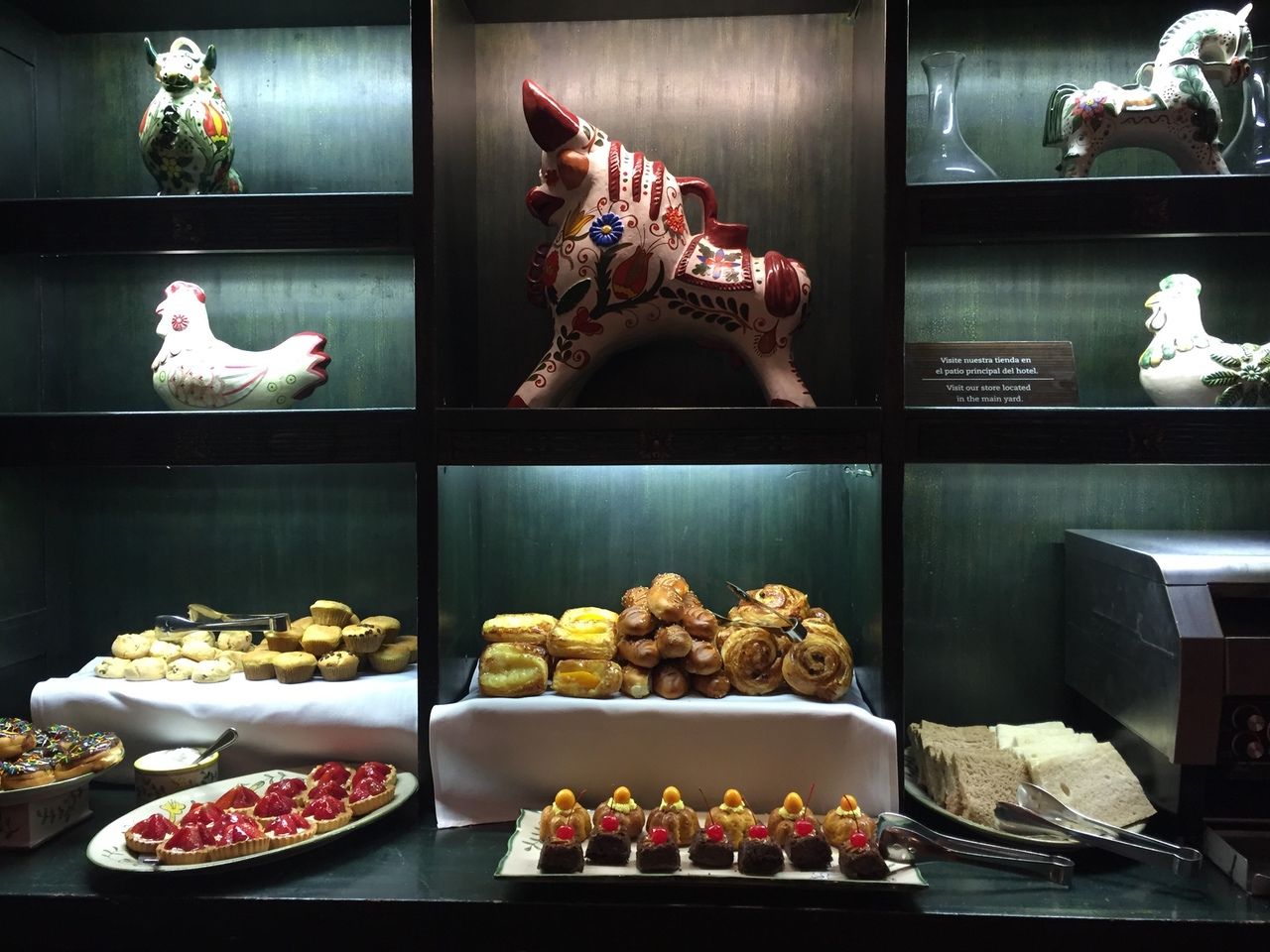 Part of the lobby. 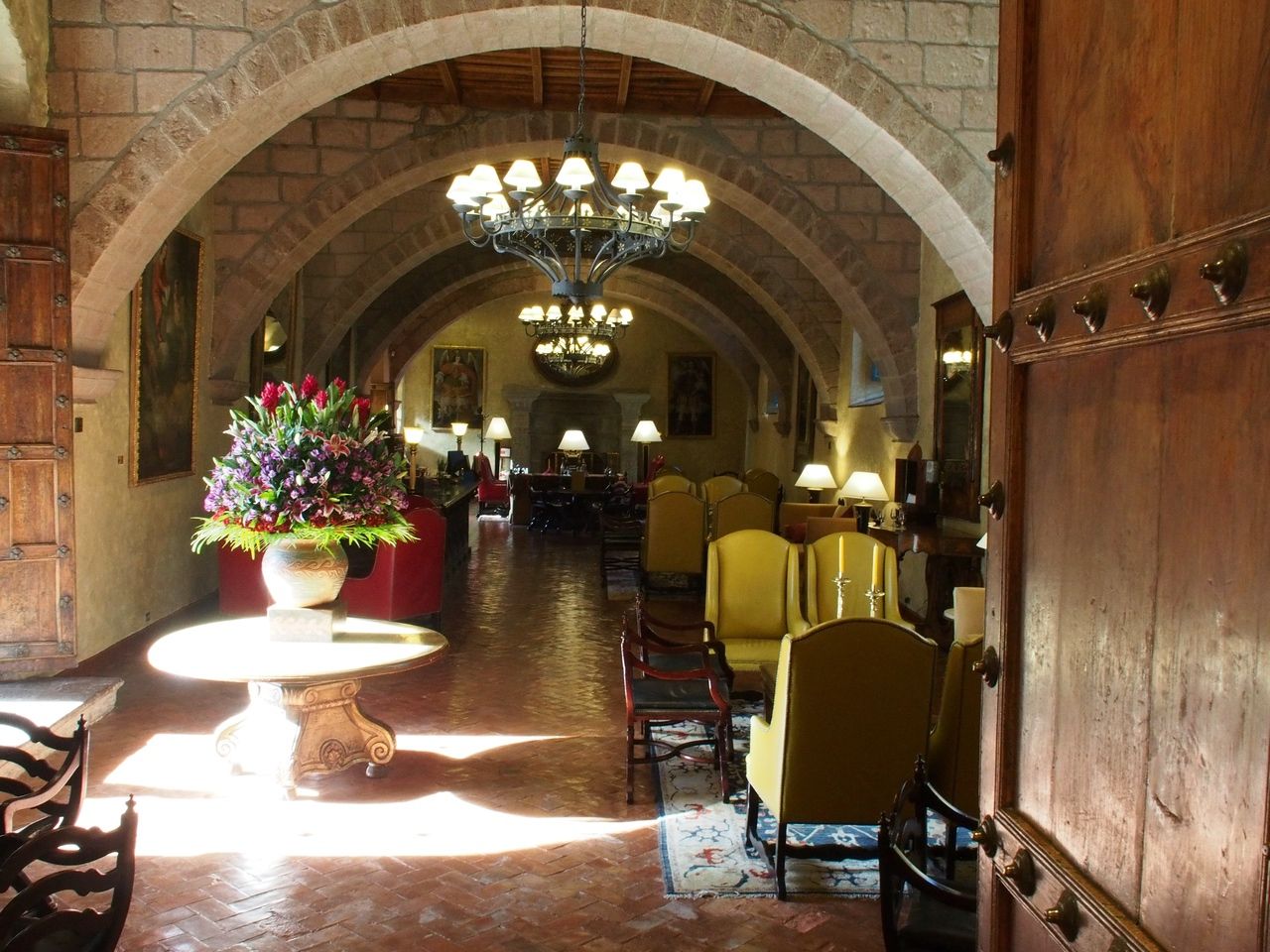 Because most of Cusco’s population was still of Quechua Inca descent at the time of construction, the Spaniards used Inca labor to build the Cathedral, and artists were trained in European style. The Incans mapped their religion onto the Christian symbols, so, in essence, could secretly maintain a dual religious identity. for example, Jesus was the sun and Virgin Mary was Mother Earth.
The current arcaded plaza is a hub of significance to the people of Cusco, who proudly fly a rainbow flag (similar but different from the LGBTQ rainbow flags), adopted in 1978. The plaza is a lively area, surrounded by churches, and by colonial buildings with carved wood balconies, housing shops and restaurants.
At 9:30, we walked over to the Plaza de Armas, for the start of a walking tour. Julian, as usual, was a wealth of information, discussing the geographical significance of the square, with the four corners pointing to the Pacific Ocean, Lake Titicaca, the Andes, and the Rainforest. 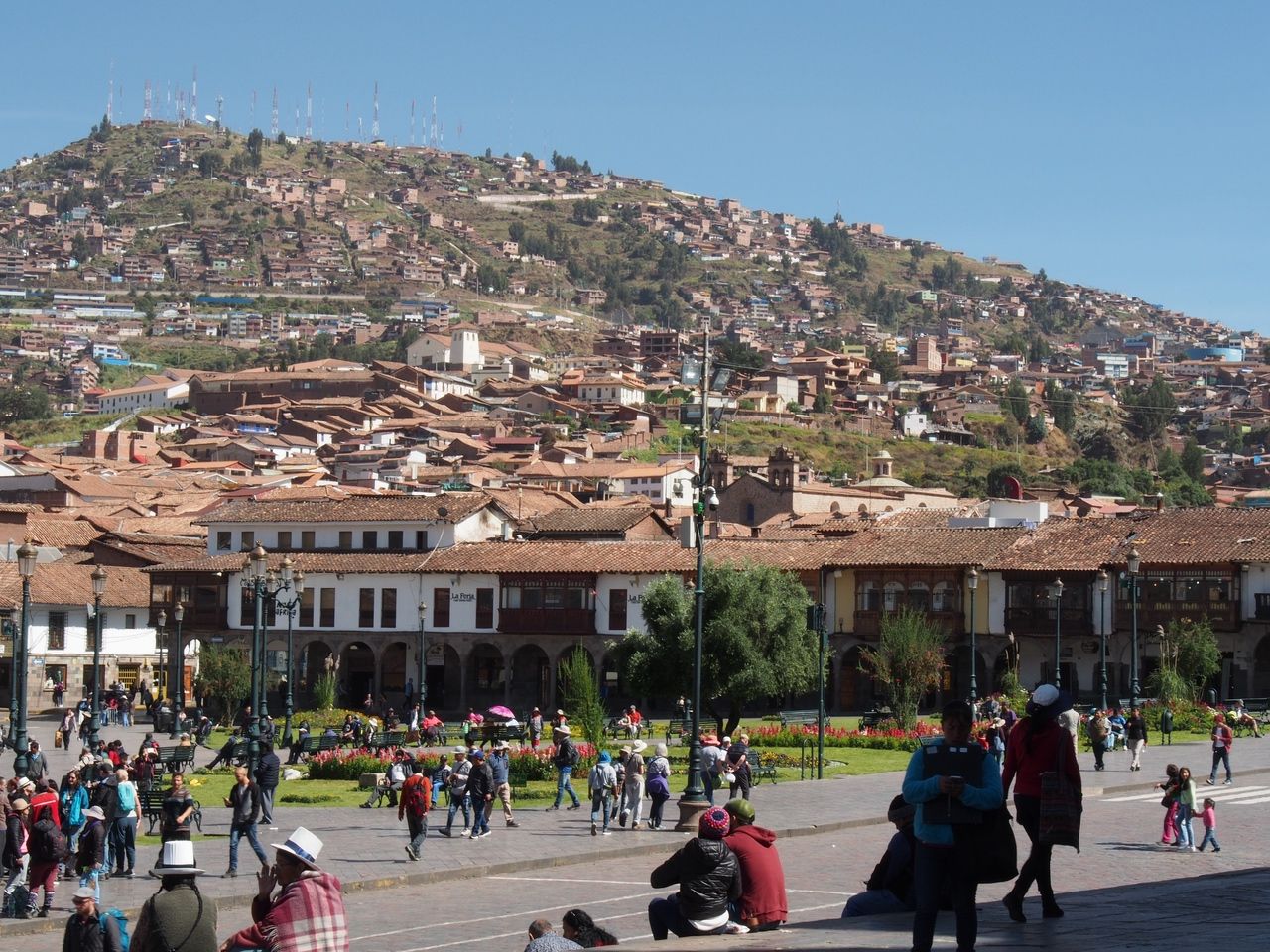 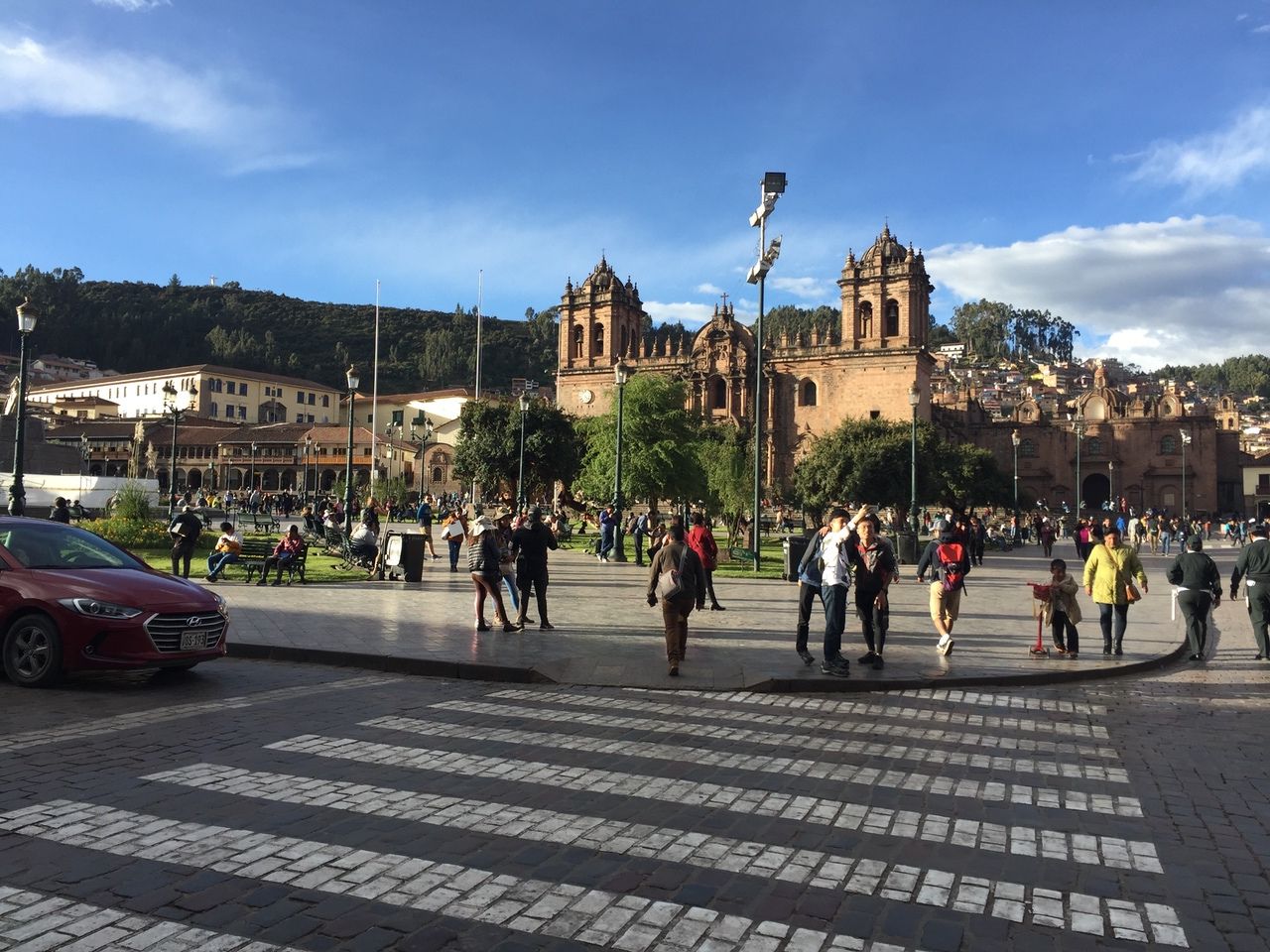 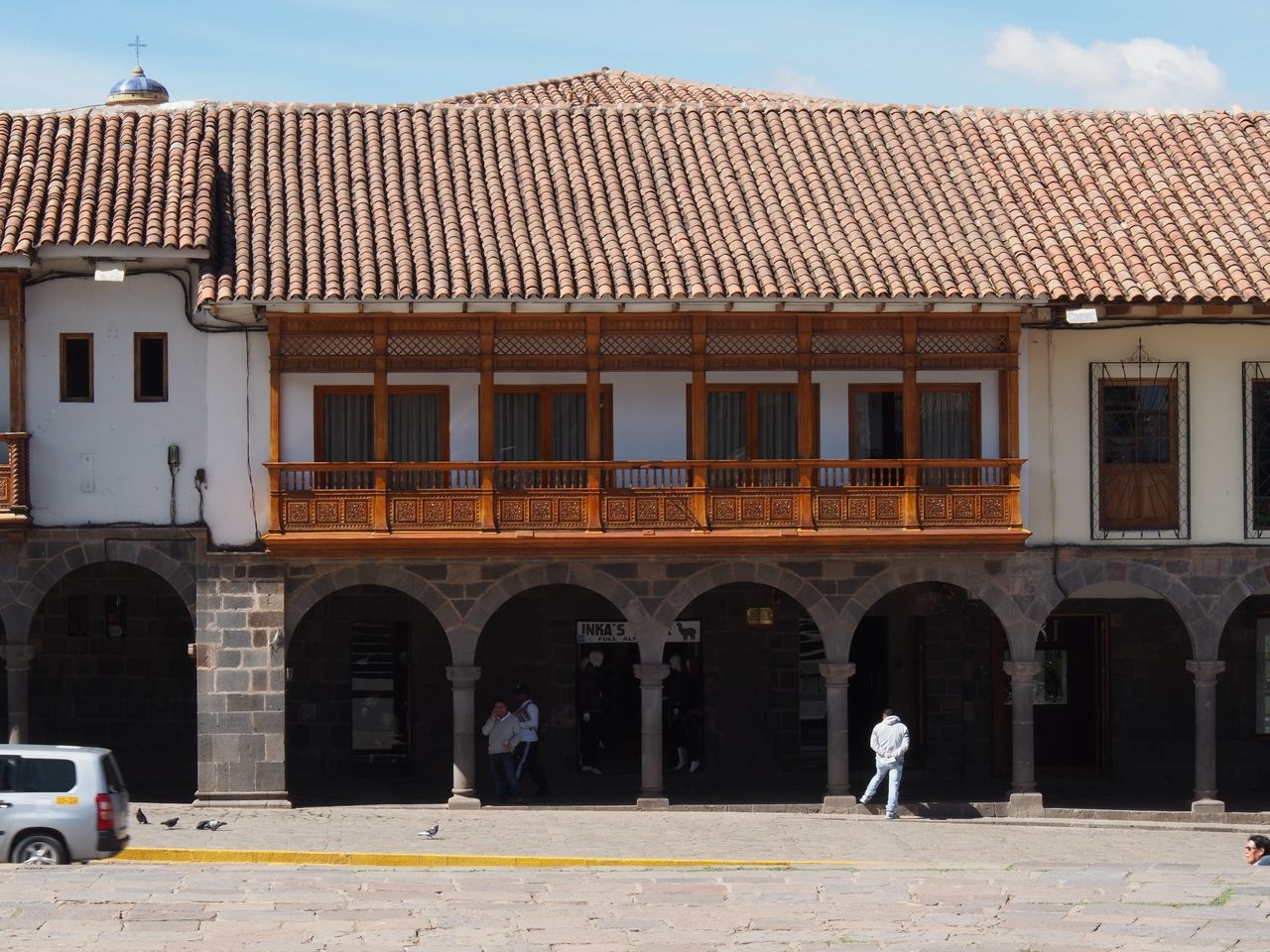 The Statue of Pachacuti. Pachacuti was the ninth ruler of the Kingdom of Cusco and later the Emperor of the Inca Empire. Pachacuti began the expansion of the Inca dominion from the valley of Cusco to a big part of western South America. Some say that Machu Picchu was built as an estate for him. 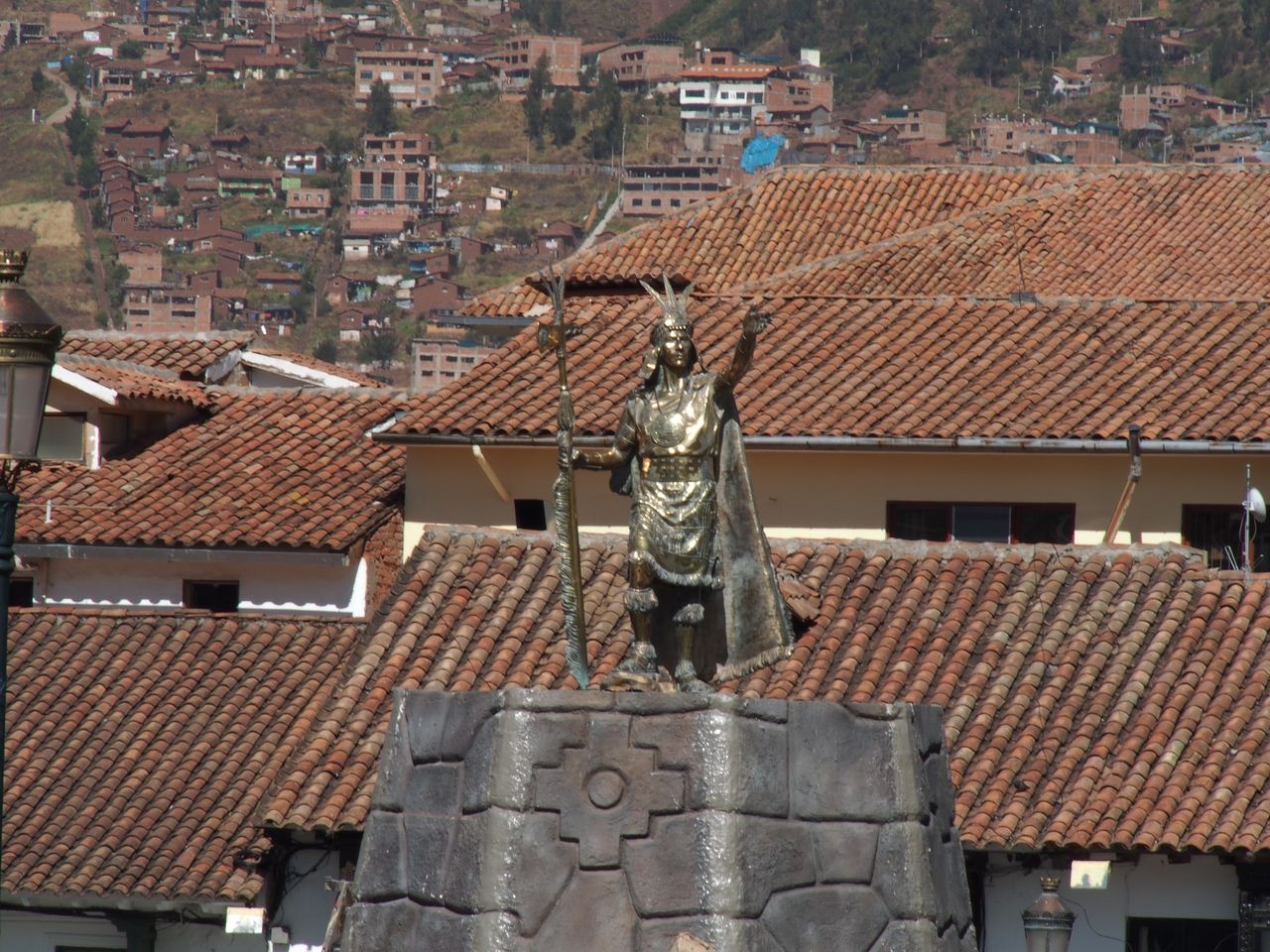 Children getting ready to march in the Solstice celebration coming up. 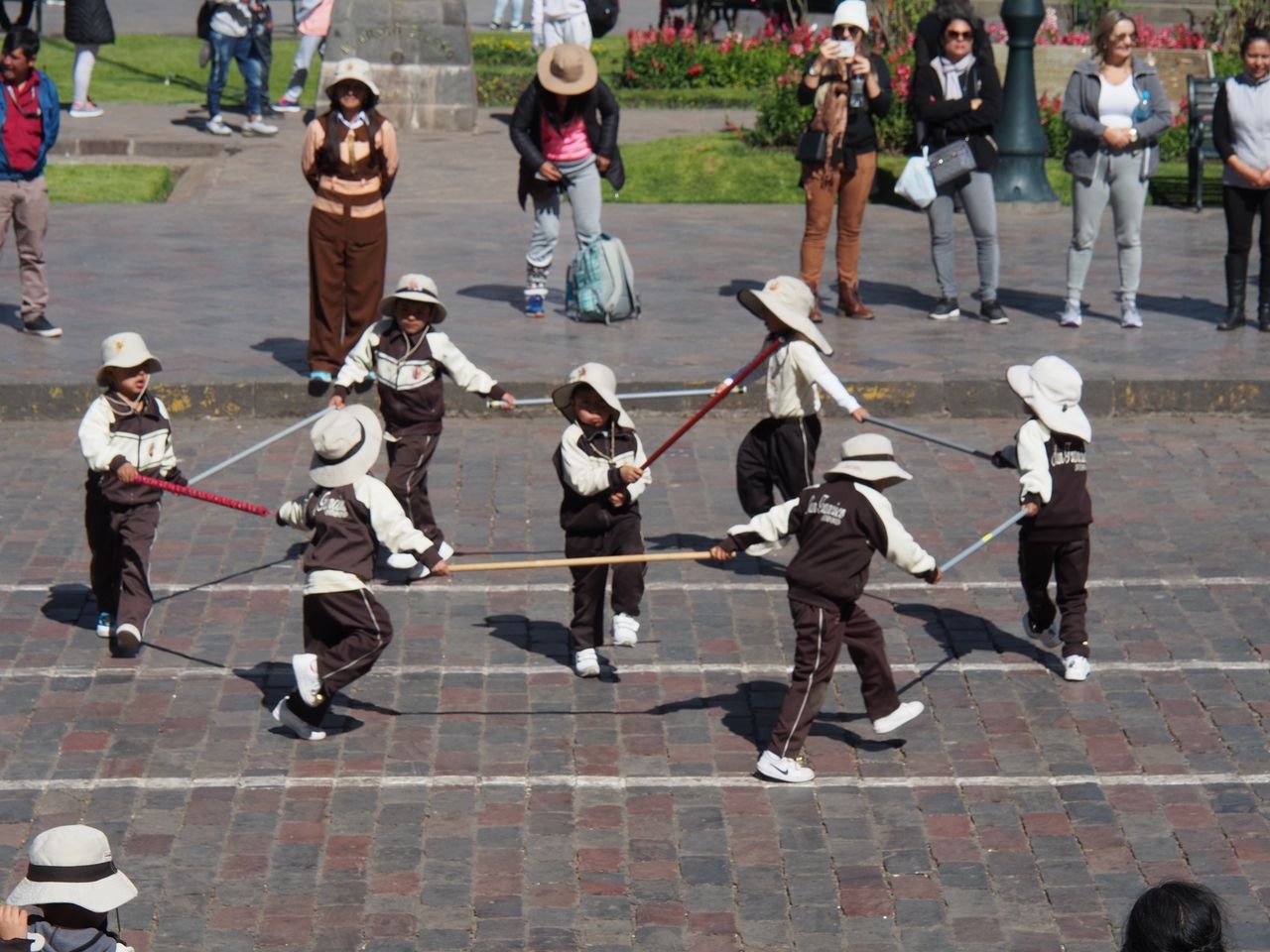 We toured the Cusco Cathedral, the mother church of the Roman Catholic Archdiocese; the adjacent Church of Triumph; and the Church of Santo Domingo, southeast of the plaza about a 5-minute walk. Photography was not allowed inside any of the churches.
Exterior of the Cathedral. 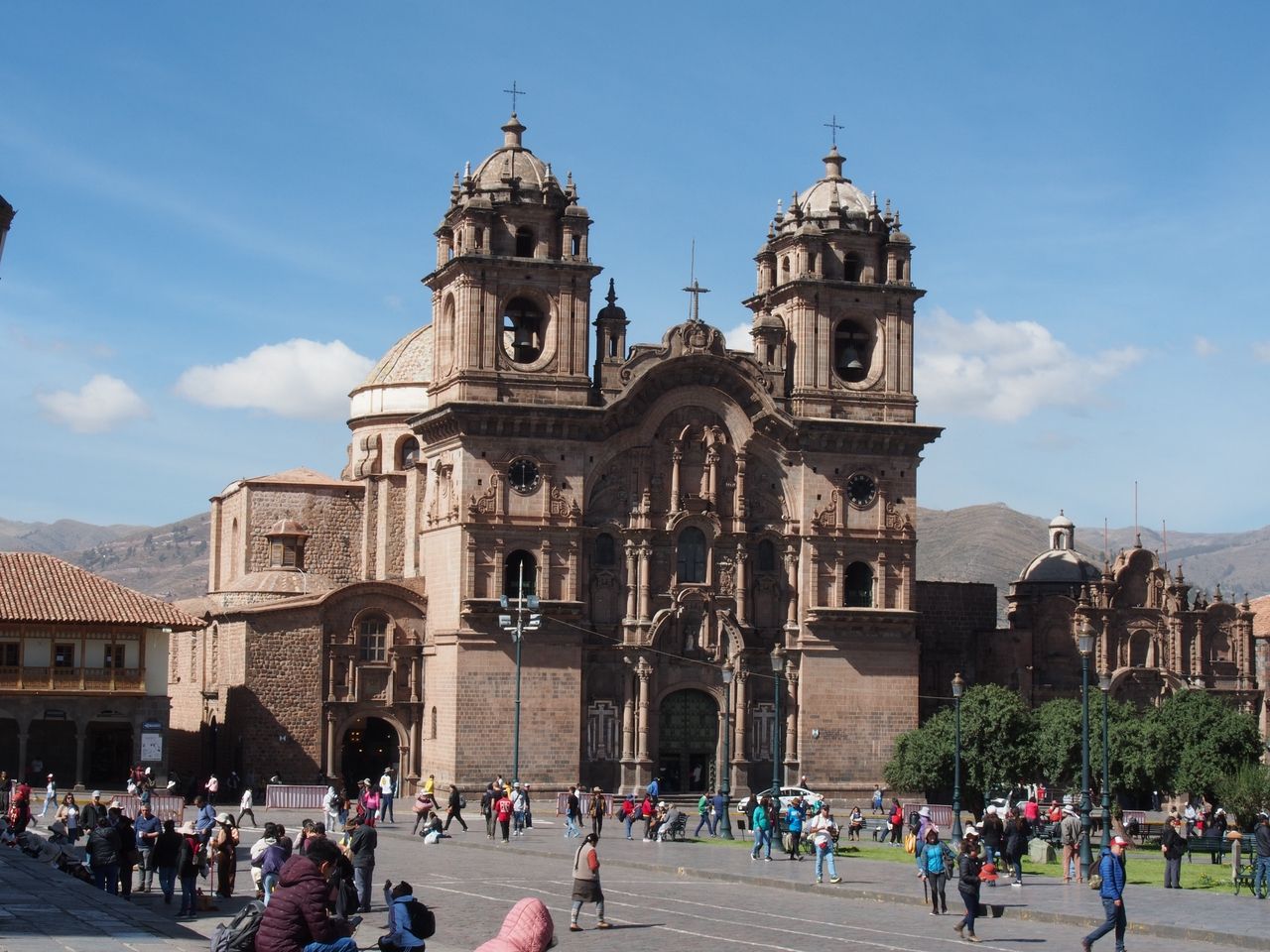 Although we entered the Catherdral first, it makes sense to talk about the Church of Triumph first. The Church of Triumph was the first church built, beginning in 1536, three years after the conquest. It was built over Suntar Wasi, an Inca ceremonial building.
The spectacular Cathedral was built over Viracocha Inca’s palace, using blocks taken from Sacsayhuamán, started in 1559 and taking almost a century to complete. It contains works by Cusco artists, incorporating Incan iconography. For example, the Virgin Mary is often portrayed with a mountain-shaped skirt, identifying her with Pachamama (Mother Earth). One of the most famous paintings is, The Last Supper, by Quechua artist Marcos Zapata, with a roasted guinea pig (cuy) — a classic Andean staple — lying on its back with its feet in the air.
We finished our tour at the Santo Domingo Church. The church was built on the foundation of the Templo del Sol (Temple of the Sun) and Koricancha, (golden enclosure). A section of the church contains part of the Inca structure, with its trapezoidal door and windows, with a window that was perhaps used to predict the solstice.
Exterior of Santo Domingo. 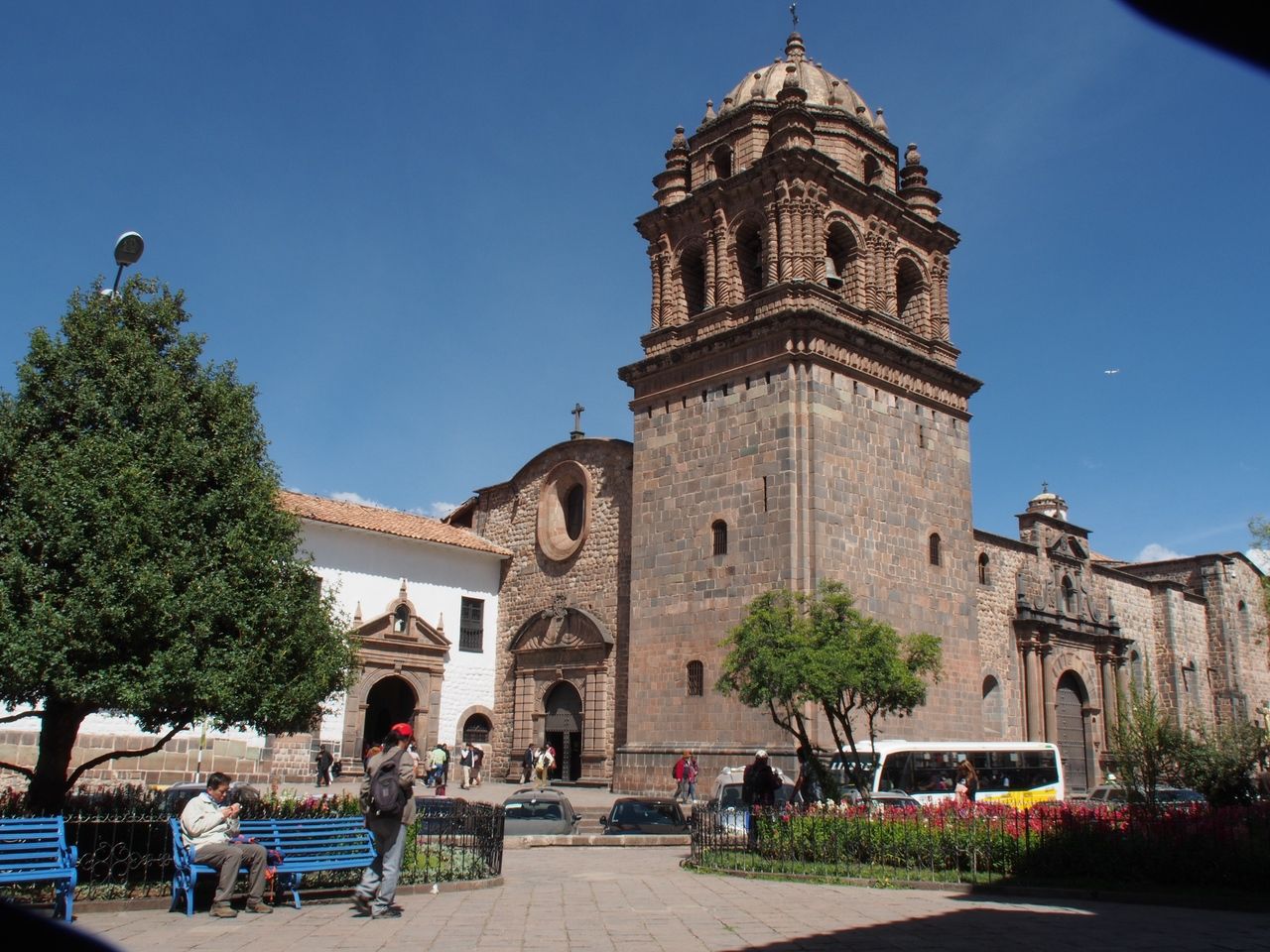 Following the tour, we said our goodbyes to Julian, as we split into two groups, Larry and Eileen with Ernesto, and headed for two families for (the same) home-cooked meals. We started with steamed vegetables, corn, cuy, and cheese. This was followed by a potato soup and chicken stew with rice. Both the drink and the dessert were made from boiled purple corn. The drink is called chincha and the dessert was similar to chincha but sweetened and thickened to a consistency of grape jelly. 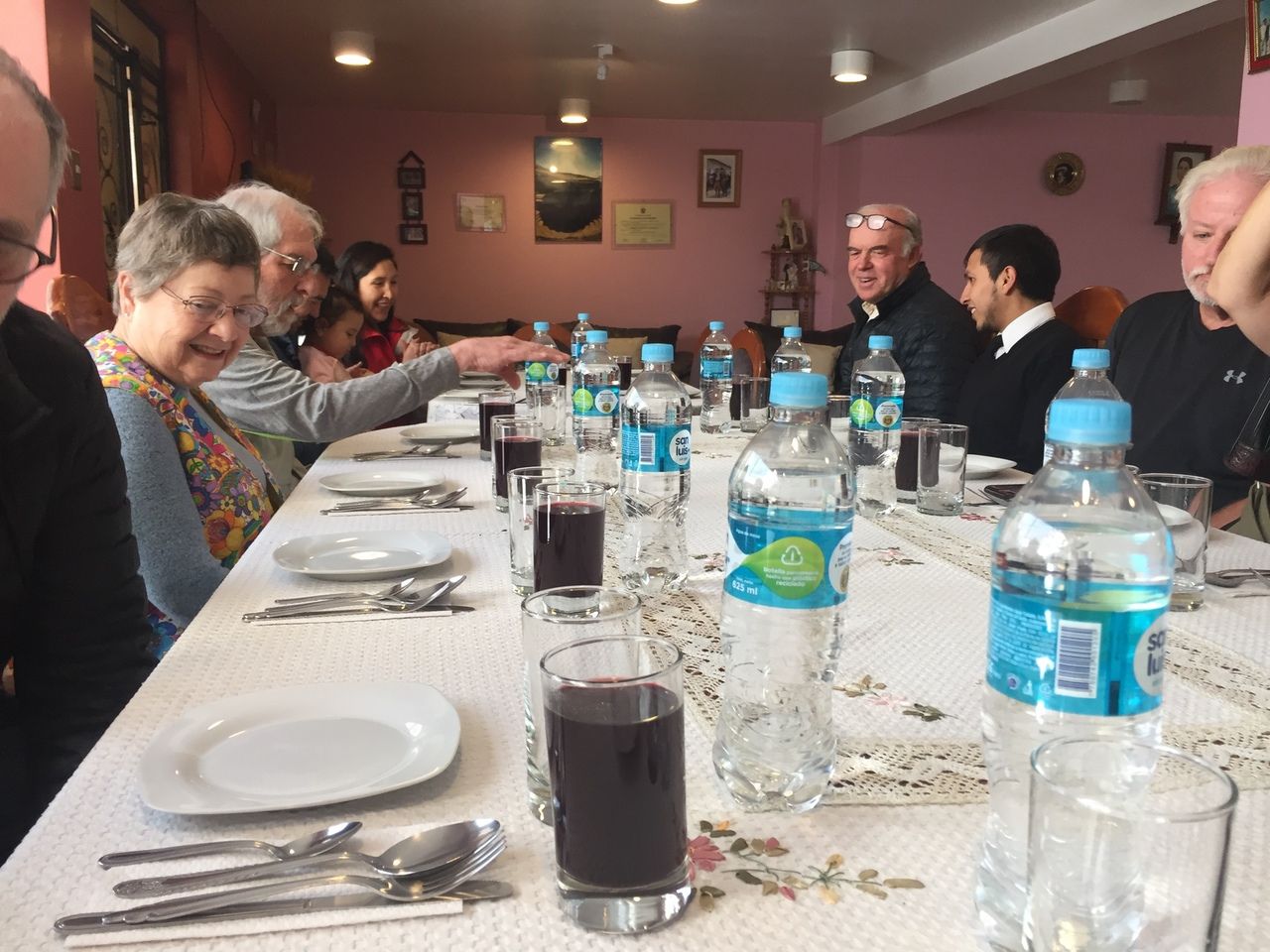 Our hosts had a textile (mostly baby alpaca) store, Factoria la Vicuñita, on the first floor, supporting fifty families or so in the countryside that produced these goods. Of course many of us bought items. We bought ski hats for each of us. 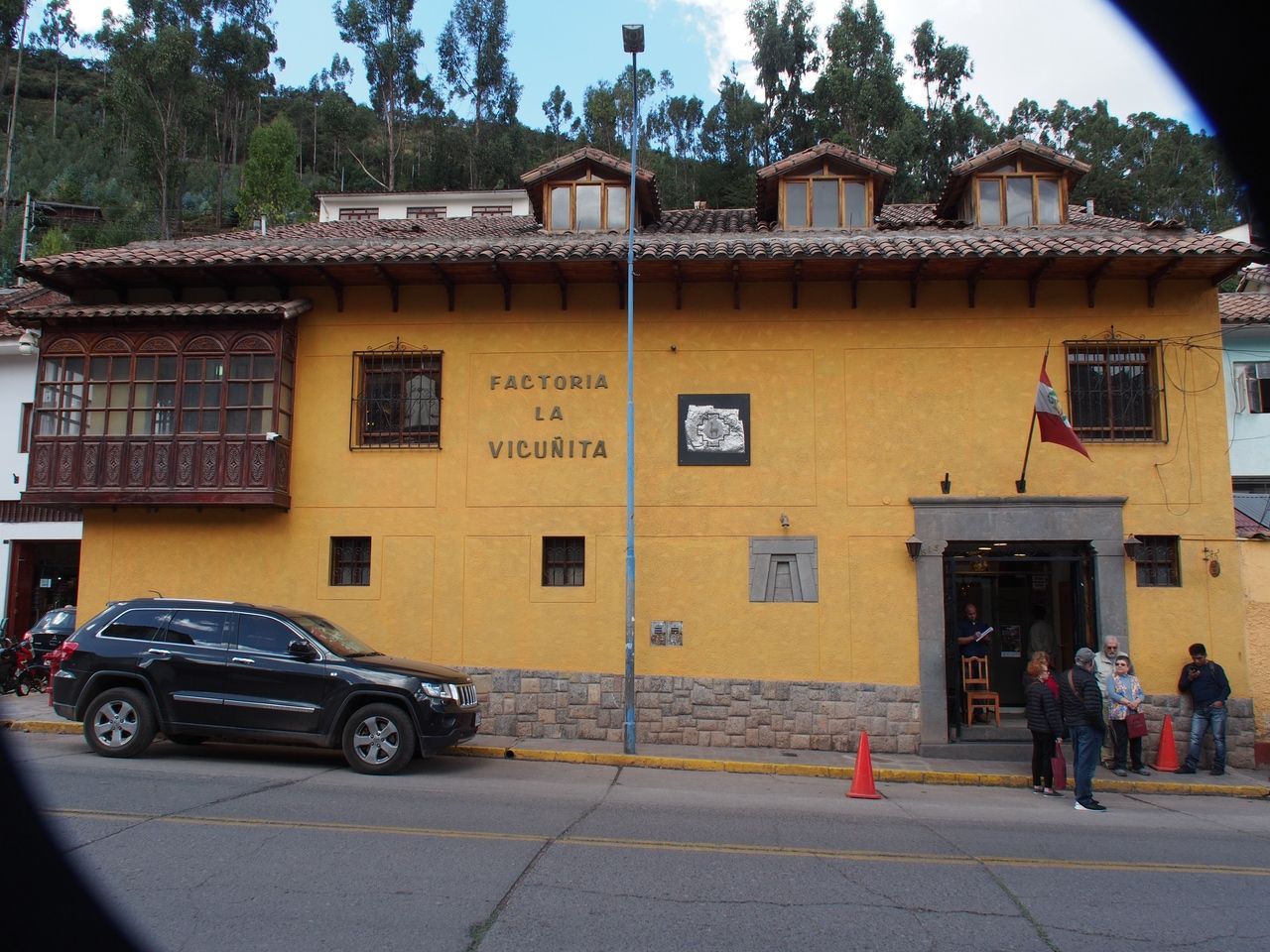 On return, we relaxed and then met up with Ernesto and some of the group to head to a grocery to buy maras salt, chocolate, and coffee.
Thirteen of the group ate at nearby Incanto, everyone getting delicious pizza (and we had a Tacoma petit verdot/tannat blend that was very good). We walked back to the hotel for an early turn-in for a 4 am wake up call.
Links:
Ecuador – Days 1 and 2

Published by Eileen and Larry Samberg on May 27th, 2019