We decided to take a group tour to Perú (Lima, Cusco, Machu Picchu) and Ecuador (Quito, Galapagos Islands) with Jim and Wendy Damoulakis. They enjoyed their tour of Portugal and Southern Spain with Odyssey Tours and persuaded us to join them on this one. The tour had a 20 person maximum and this one is at that maximum.
Trip locations: 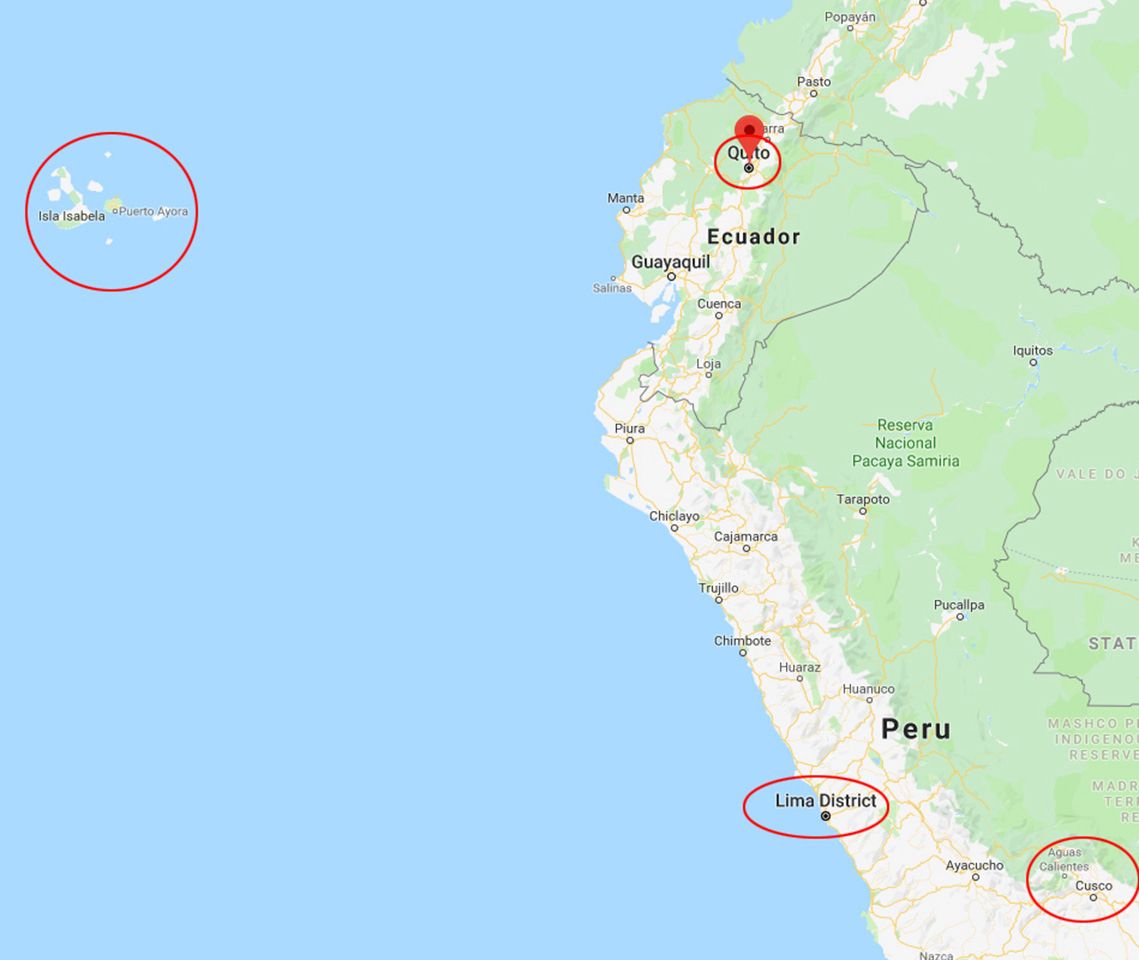 We left early on Tuesday morning (May 21), flying Boston to Miami. We had a long layover in Miami, but by the time we retrieved our luggage and relaxed a bit, met up with Jim and Wendy, and had lunch at Corona Beach House courtesy of Priority Pass, we only had another hour or so before boarding our flight from Miami to Lima. In Lima we were met by Jennifer from Odyssey, and joined with another couple (Alice and Rich) on the flight to head to the Westin Lima, arriving around 10:30 pm.
After breakfast, our group of 20 met with Ernesto Riedner, our Perú Odyssey tour director, who gave an overview of our week. At 11, we headed out by bus with Ernesto and our day guide, Shayla, to see Lima.
Originally founded by Spanish conquistador Francisco Pizarro, Lima has grown into one of the largest cities in the Americas, and is home to nearly one third of Perú's population, along with a multitude of cultural, educational, and religious sites.
We first visited the Museo de Arte de Lima, a prominent art museum in Lima. The Museum covers 3,000 years of Peruvian history, with exhibits and collections showcasing the earliest Andean civilizations up through modem times, focusing on ceramics, textiles, and metalwork. We went on to Colonial era and Christian-motif paintings, finishing with some 1930s art showcasing native culture. Shayla did an amazing job guiding us through history in a short time. 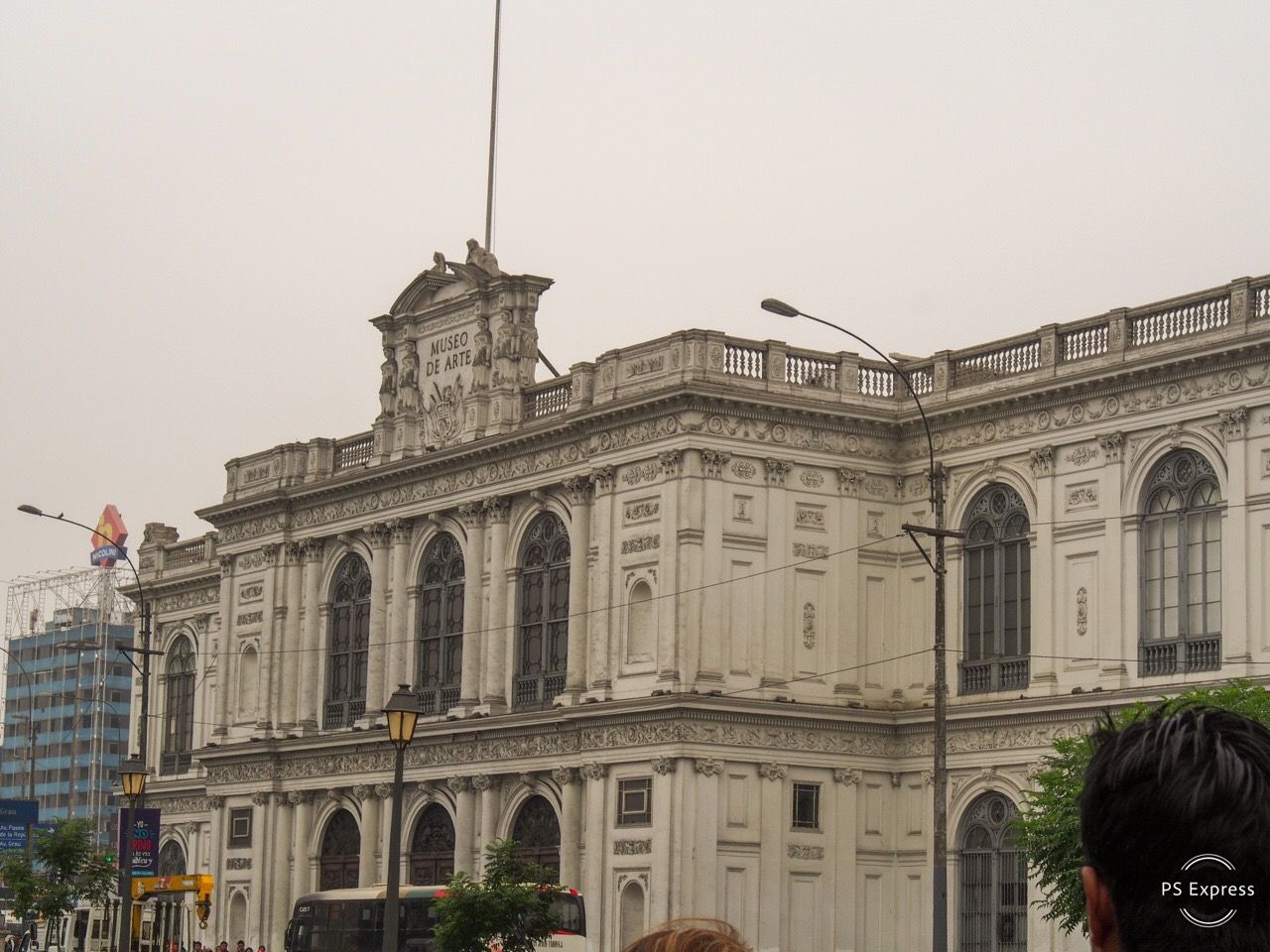 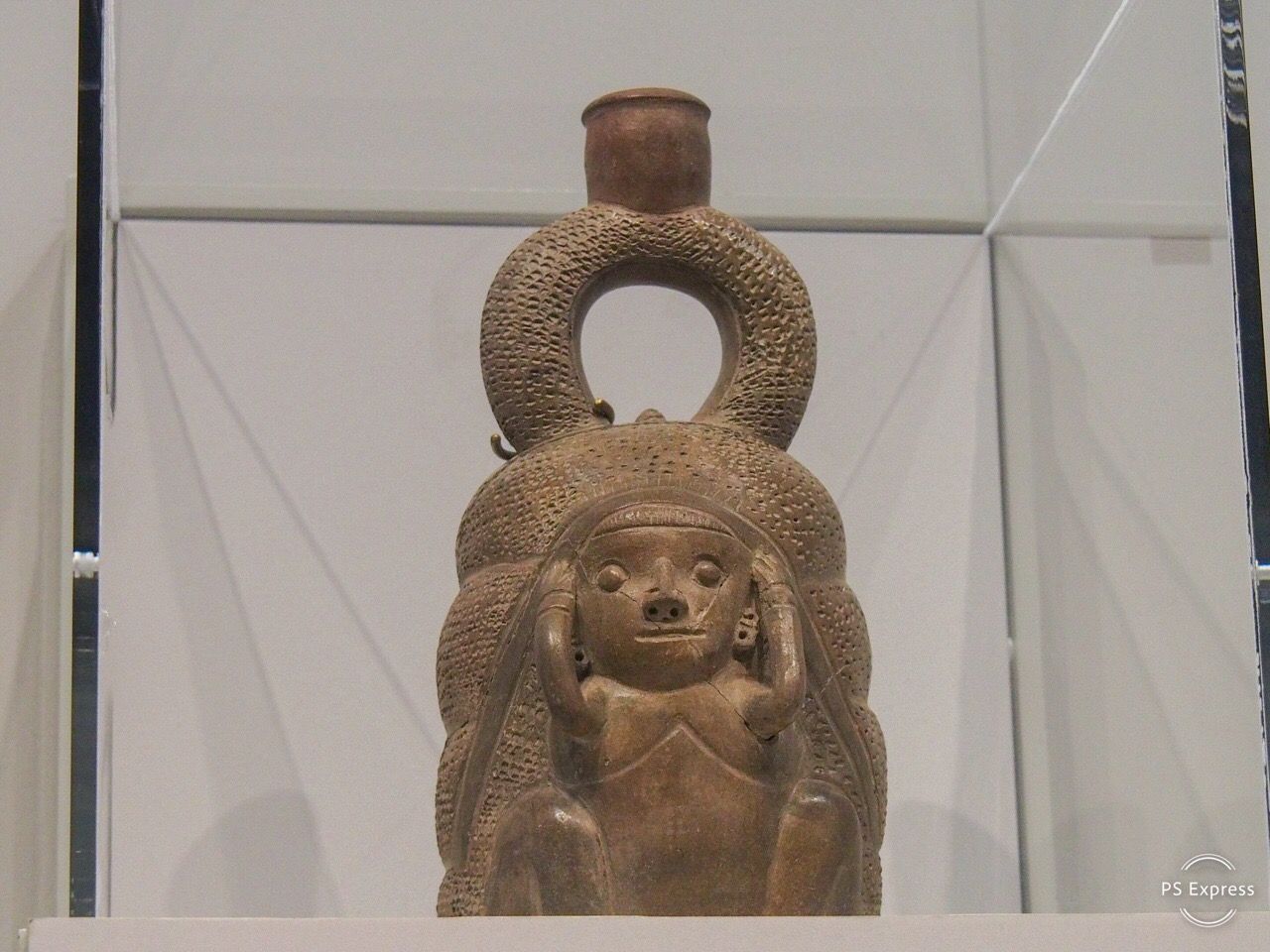 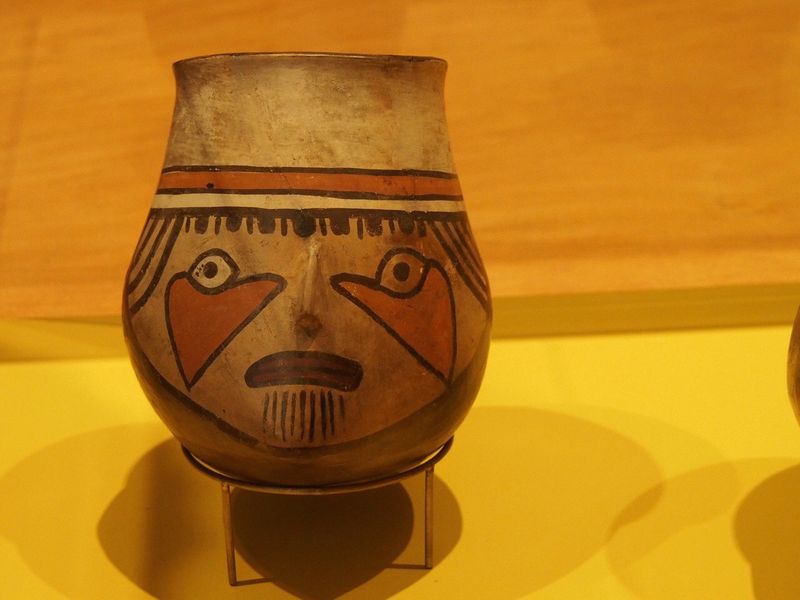 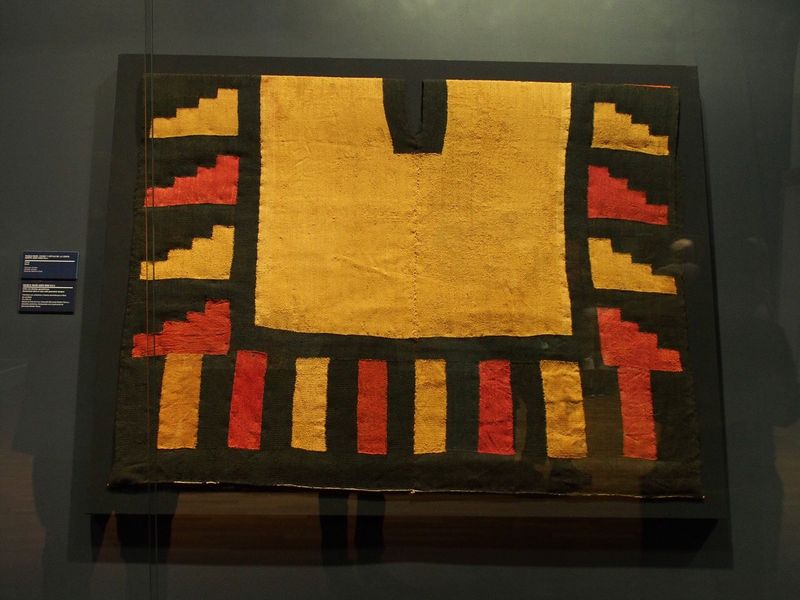 The Quipu. Thought to be a quantification tool during the Wari and Inca periods. 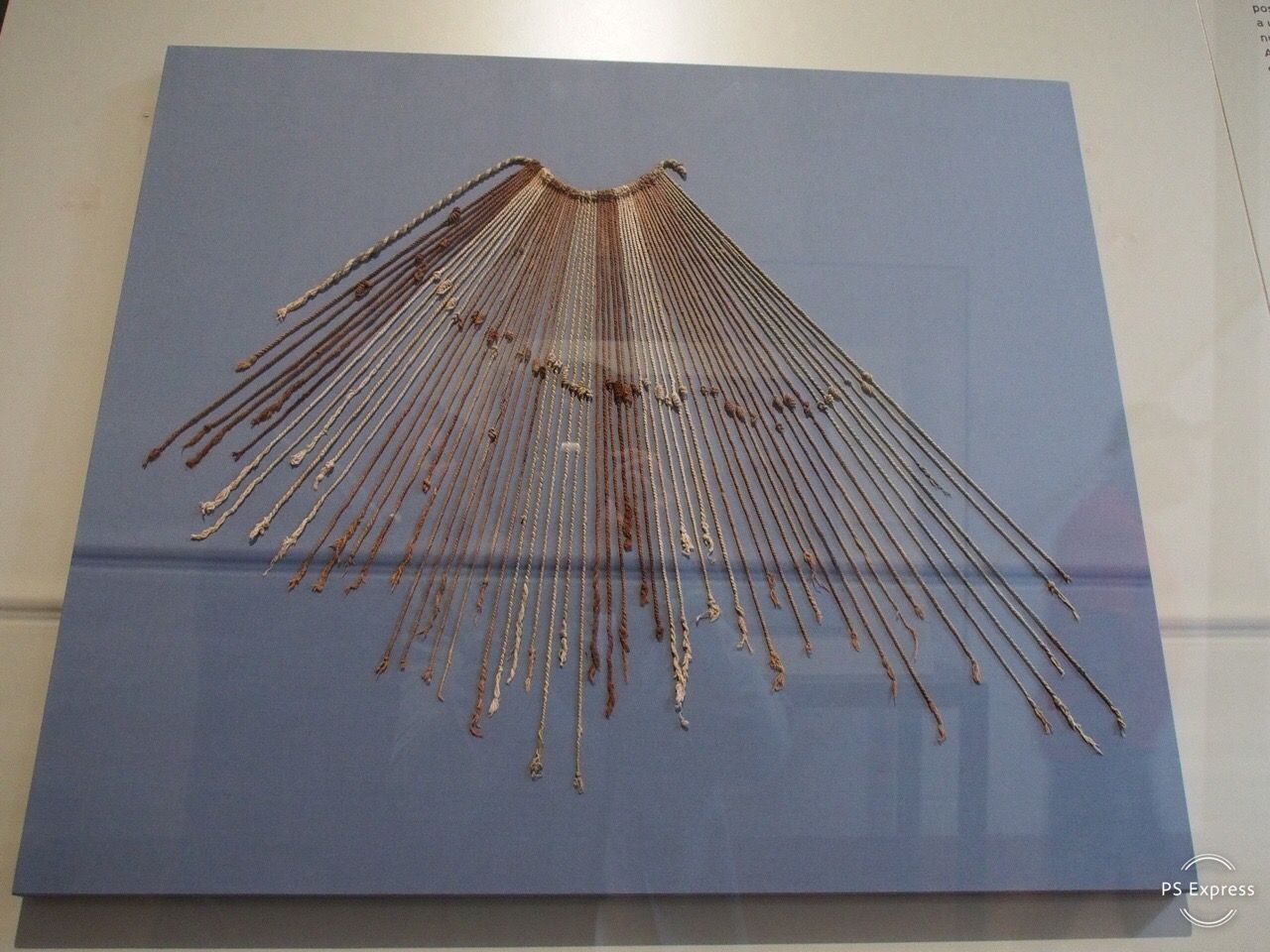 Metal as a symbol of prestige. 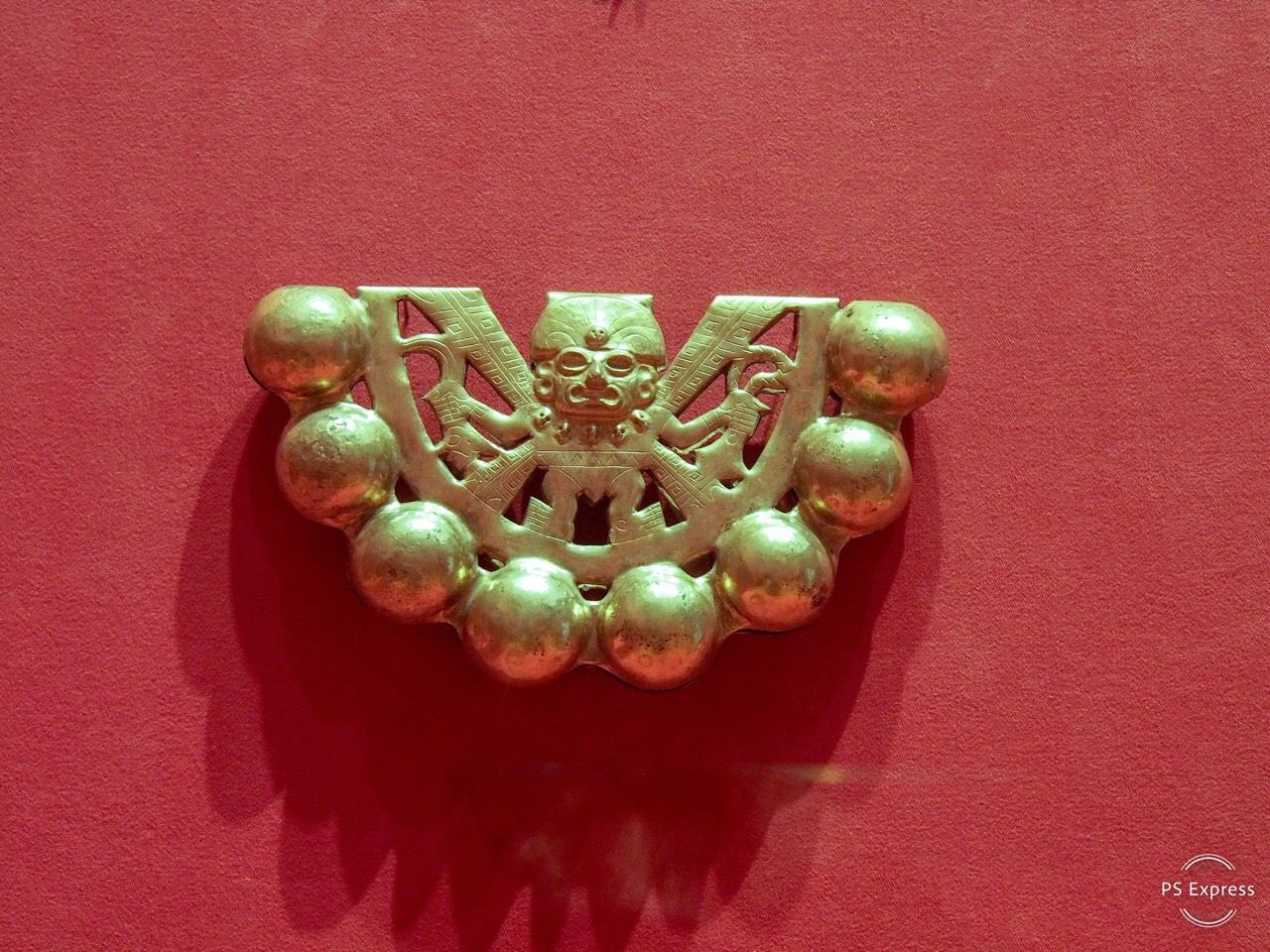 Aryballos. Typical Inca vessel, a pitcher with a long spout and conical base used to serve chicha (fermented (alcoholic) or non-fermented beverage derived from grains, maize, or fruit) in the most important ceremonies. The base can be rested in the ground for pouring. It was carried on the back using a rope through the handles. 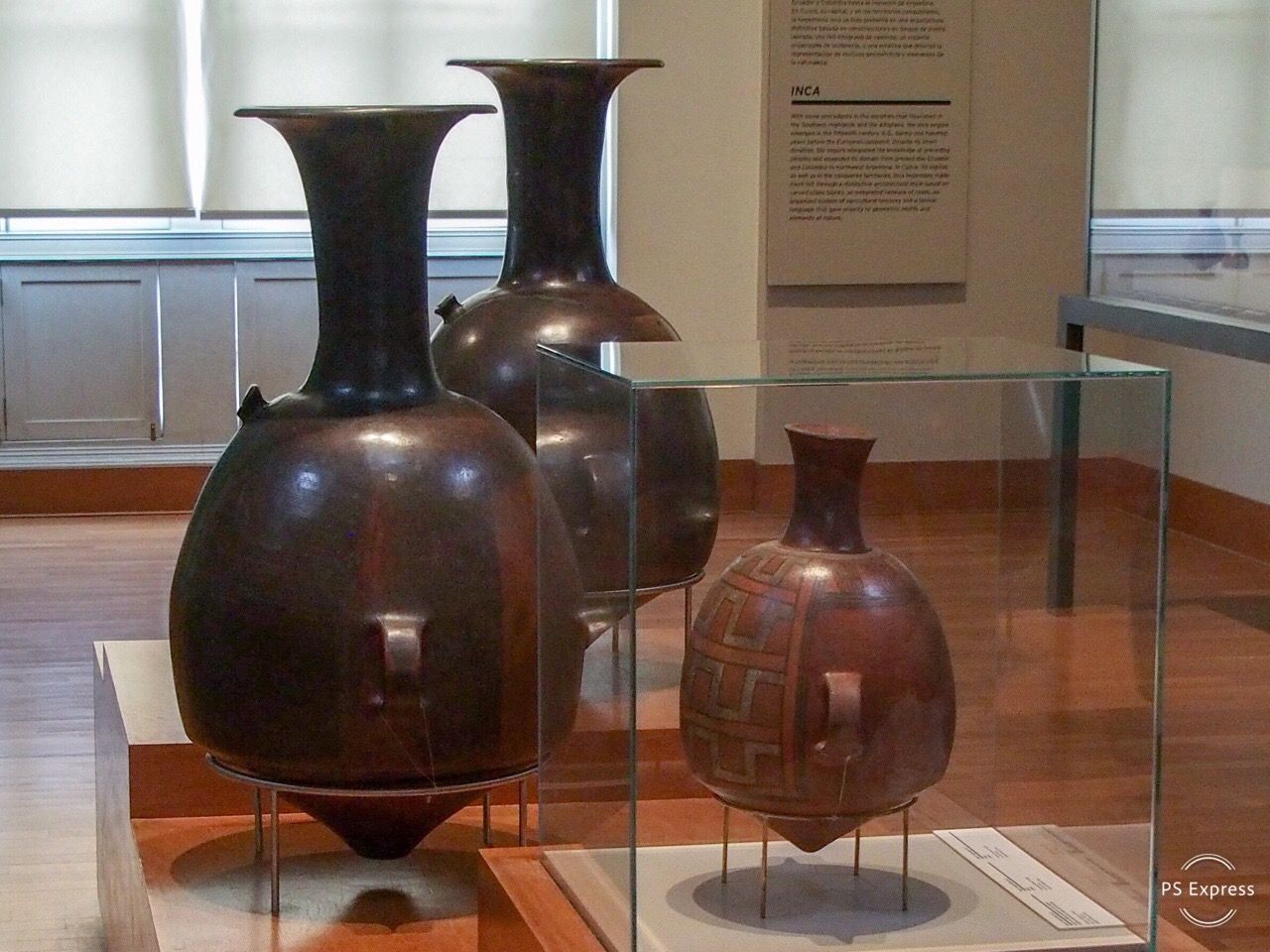 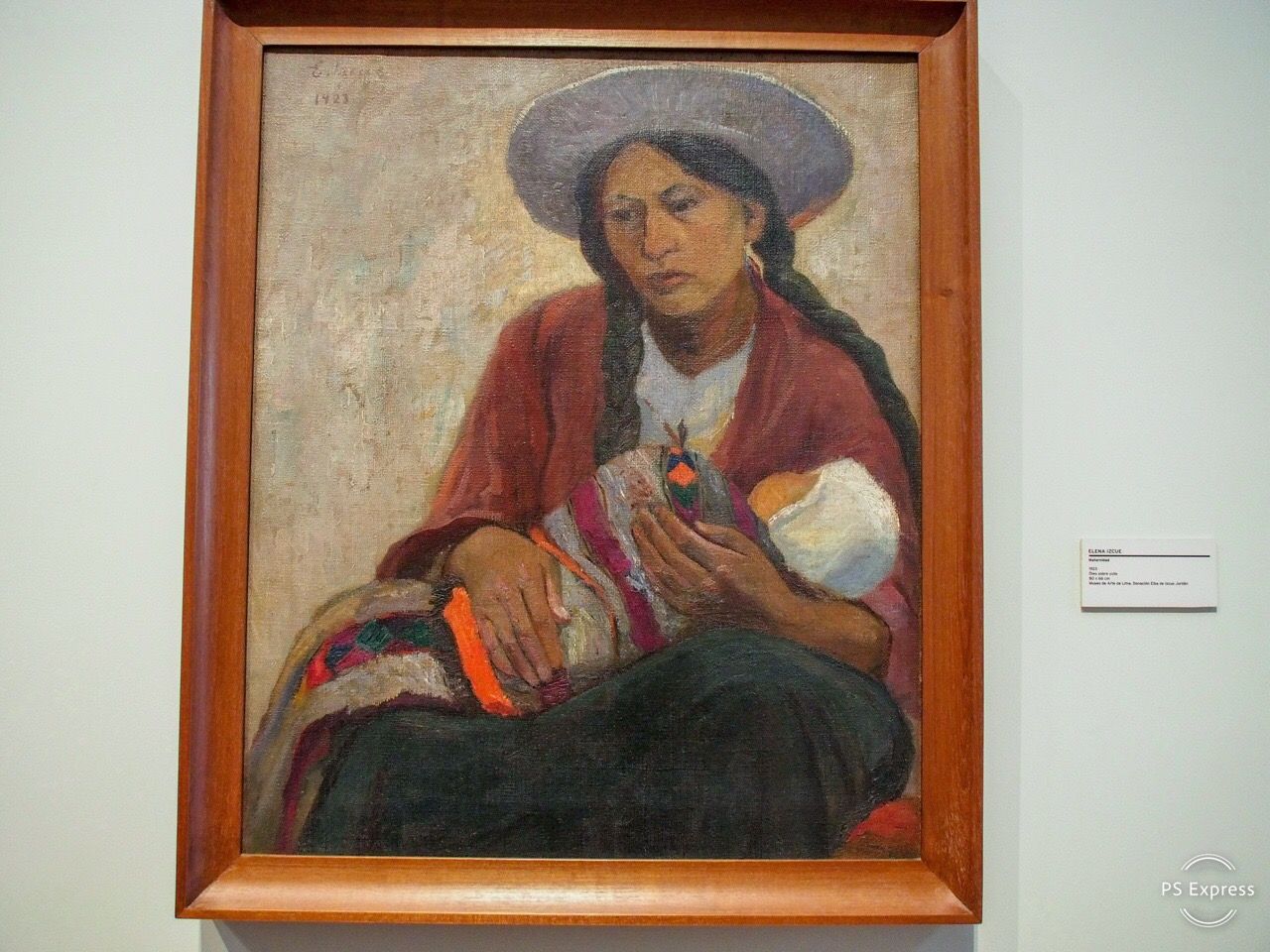 After a quick lunch, we headed to the historical Colonial main square, Plaza de Armas, surrounded by the Presidential Palace, the site of the palace built by Pizarro; the Municipal Offices of the Mayor; the Cathedral, rebuilt in 1758 after an earthquake destroyed the original building; and Santo Domingo Basilica and Monastery. 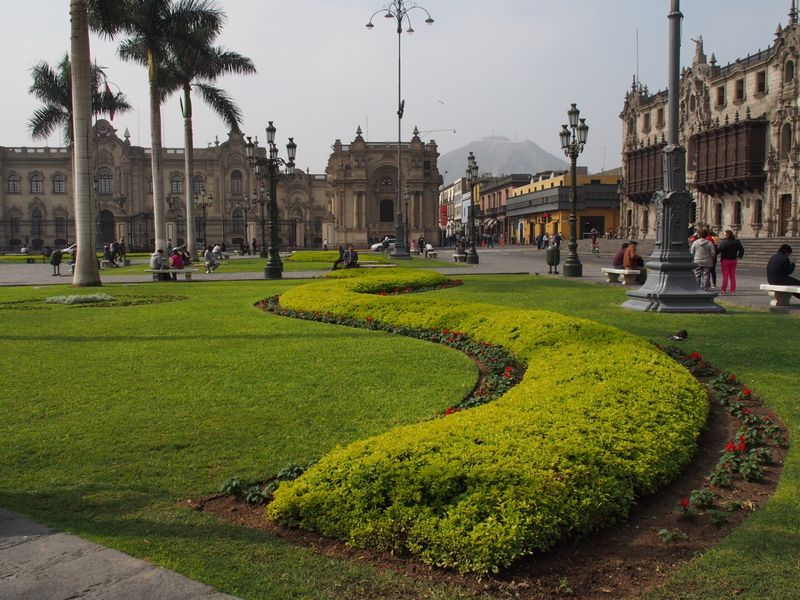 We toured the basilica and monastery, completed around 1587, but with redesigns and rebuilds after a number of earthquakes. The present Bell Tower was built in 1766 in Rococo style. We visited the main cloister, the library, and the basilica, plus some other areas. The Mudéjar (Moorish influence) wood coffered ceiling in the guest receiving room by the main cloister dates back to 1580. 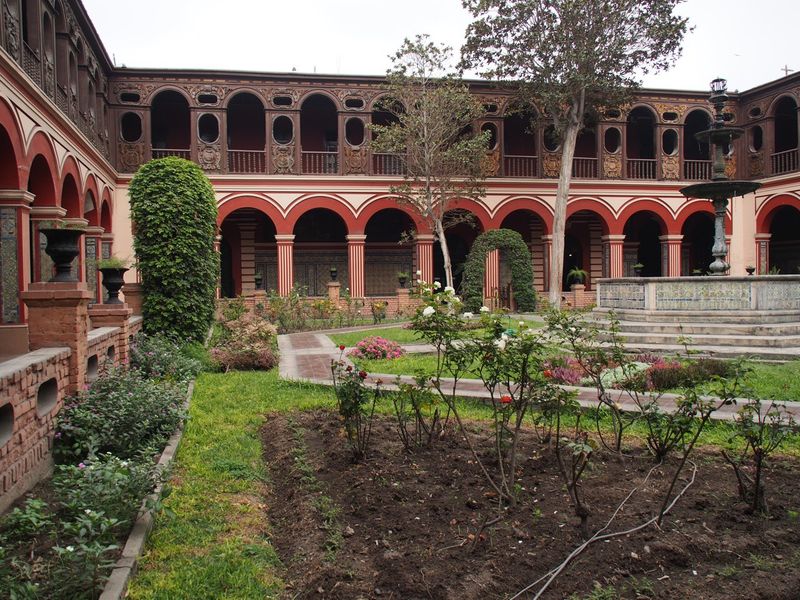 Before the monastery, we stopped by the Rimac River near the square. Shayla pointed out the shanty towns up on San Cristobal, talking about what services were and were not available for the poor. 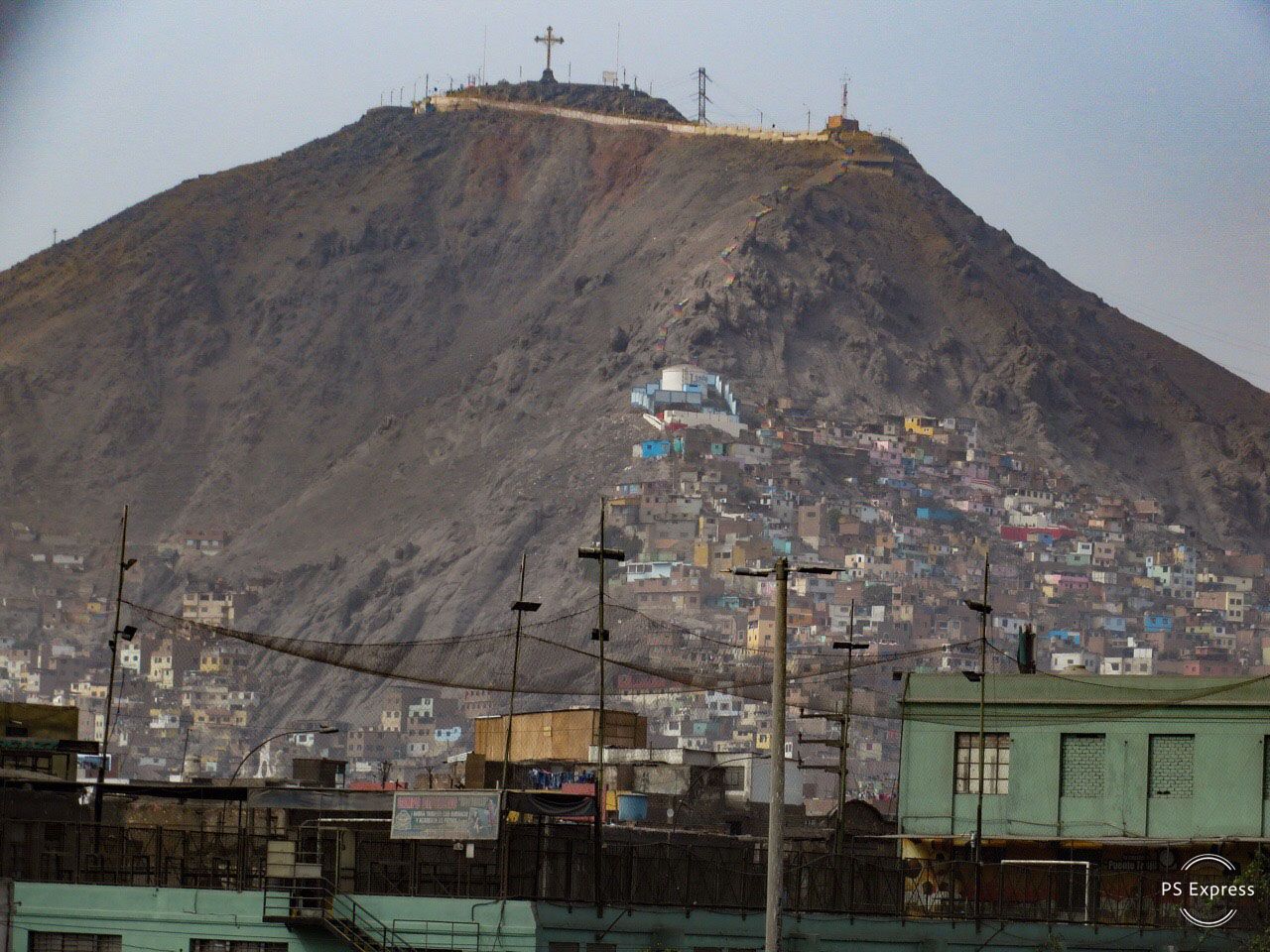 We then headed back to our hotel in the San Isidro neighborhood. Ernesto, Larry, Jim, and Eileen walked down the street to a Claró cell phone store, taking much longer than any of us thought, but finally getting Perú-only prepaid SIMs for our phones. Before heading back, we wandered through a large supermarket, with Ernesto pointing out Peruvian fruits, potatoes, and corn. 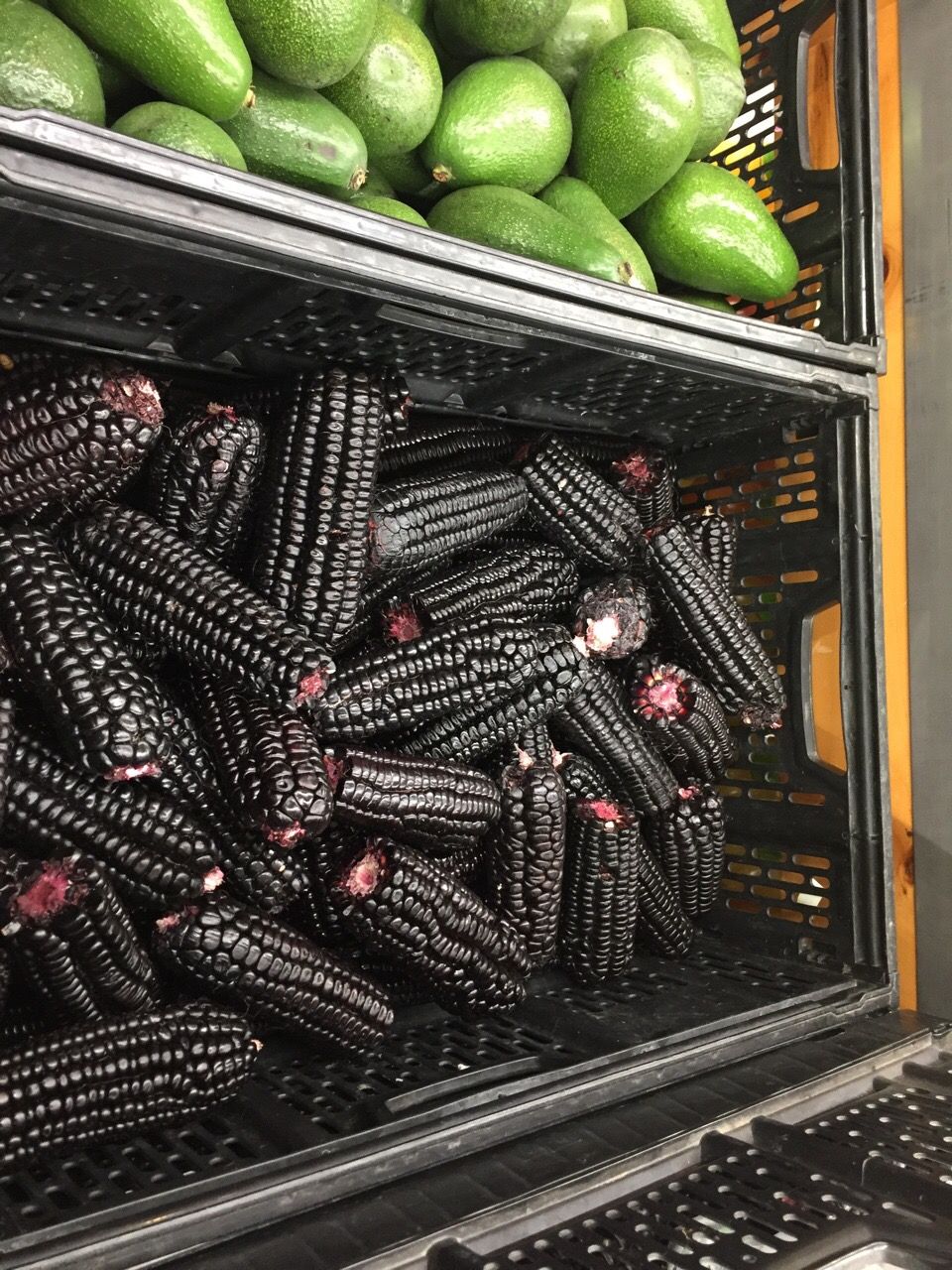 Dinner was at Maras, an excellent restaurant in the hotel. We had mixed seafood cerviche and sea bass, followed by a delicious trio of desserts.
Thoughts on Lima: Lima is a bustling big city with many neighborhoods, with a wide spectrum of buildings, some in poor shape, some brand new and modern, with lots of construction, and lots of traffic and people. The museums, the parks, the Colonial-era buildings made the short visit very worthwhile. The major improvements have been made in the last 20 years. Shayla was clearly passionate about how far Lima has come in that time.
Links:
The Westin Lima Hotel and Convention Center
Maras Restaurant
Link to Perú – Day 3

Published by Eileen and Larry Samberg on May 21st, 2019