Sunday, June 12, 2022
Our lovely B&B in Gordes, Domaine de l’Enclos, was across a valley to the old town, with a great view of Gordes from a nearby street, and about a 10-minute walk to town. Gordes is one of "beautiful villages of France". It has been occupied since prehistoric times. It has a castle from the 10th century, remodeled in the 15th century Renaissance style. Gordes occupies some of Les Monts de Vacluse, a group of mountains and hills, part in the valley of the Calavon (a local river) also called the "Luberon Valley".
First some views of our B&B, views of Gordes from near our B&B, and pictures in Gordes, taken at different times during the two days. 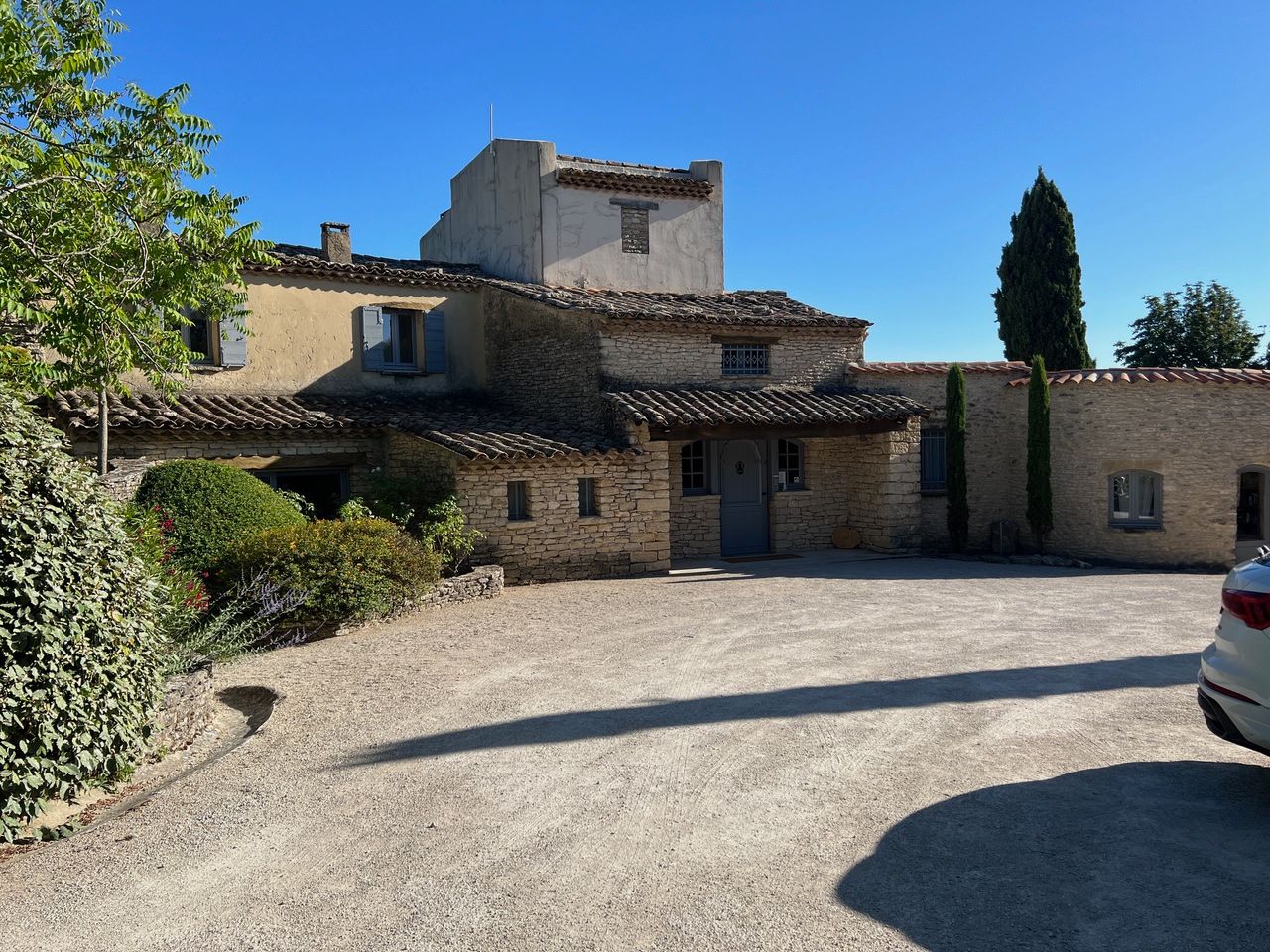 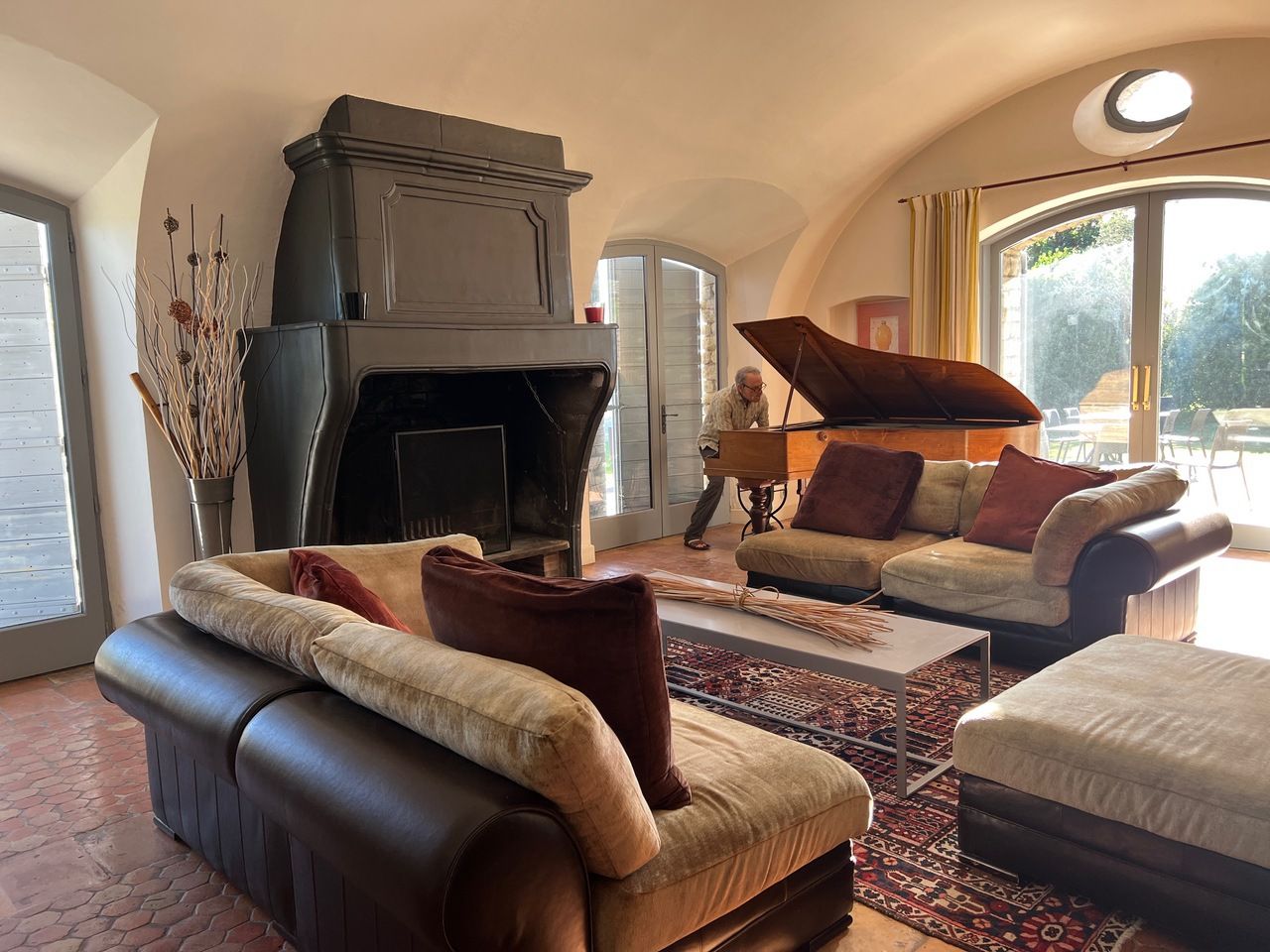 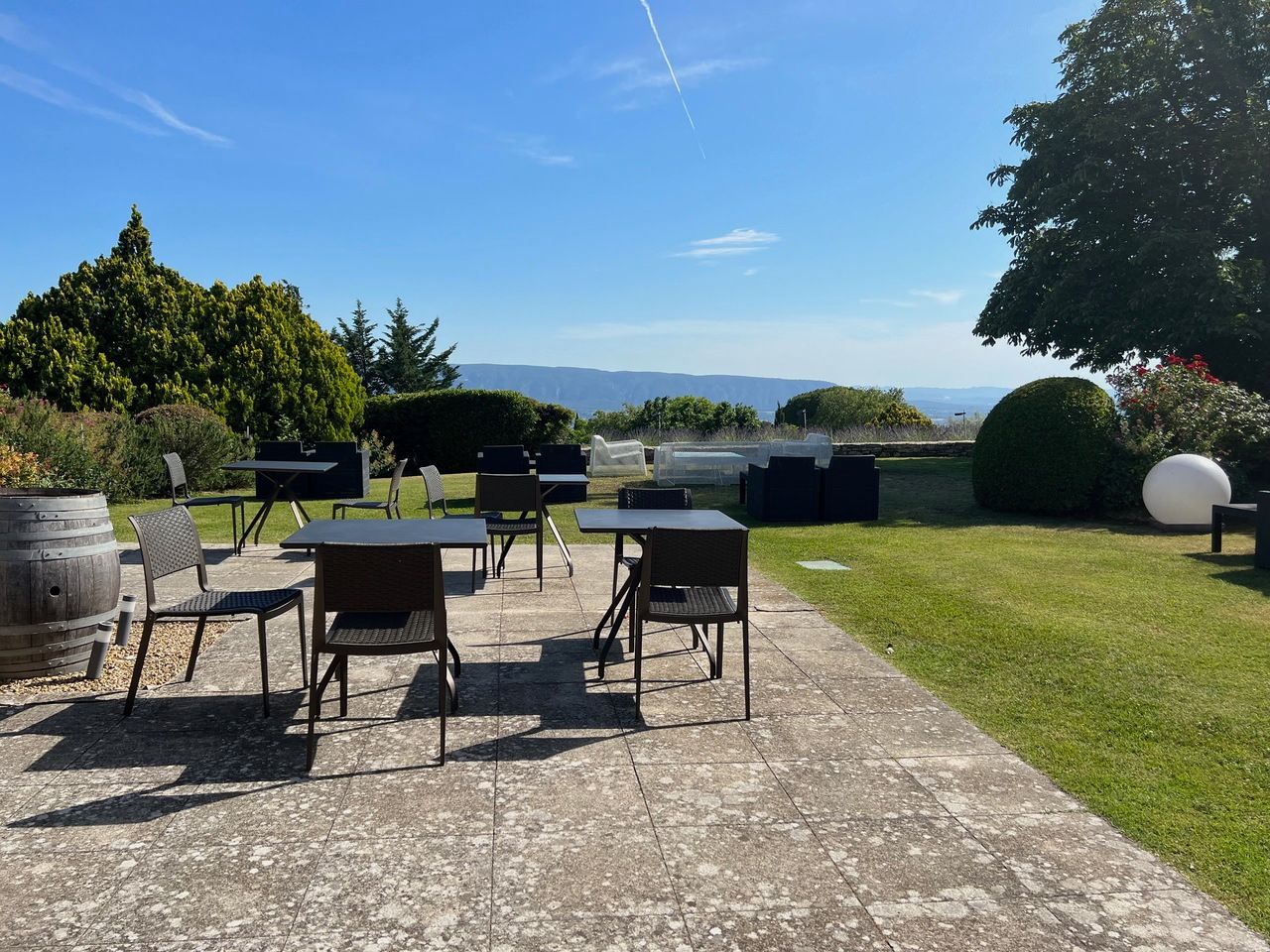 The village of Gordes (across the valley). 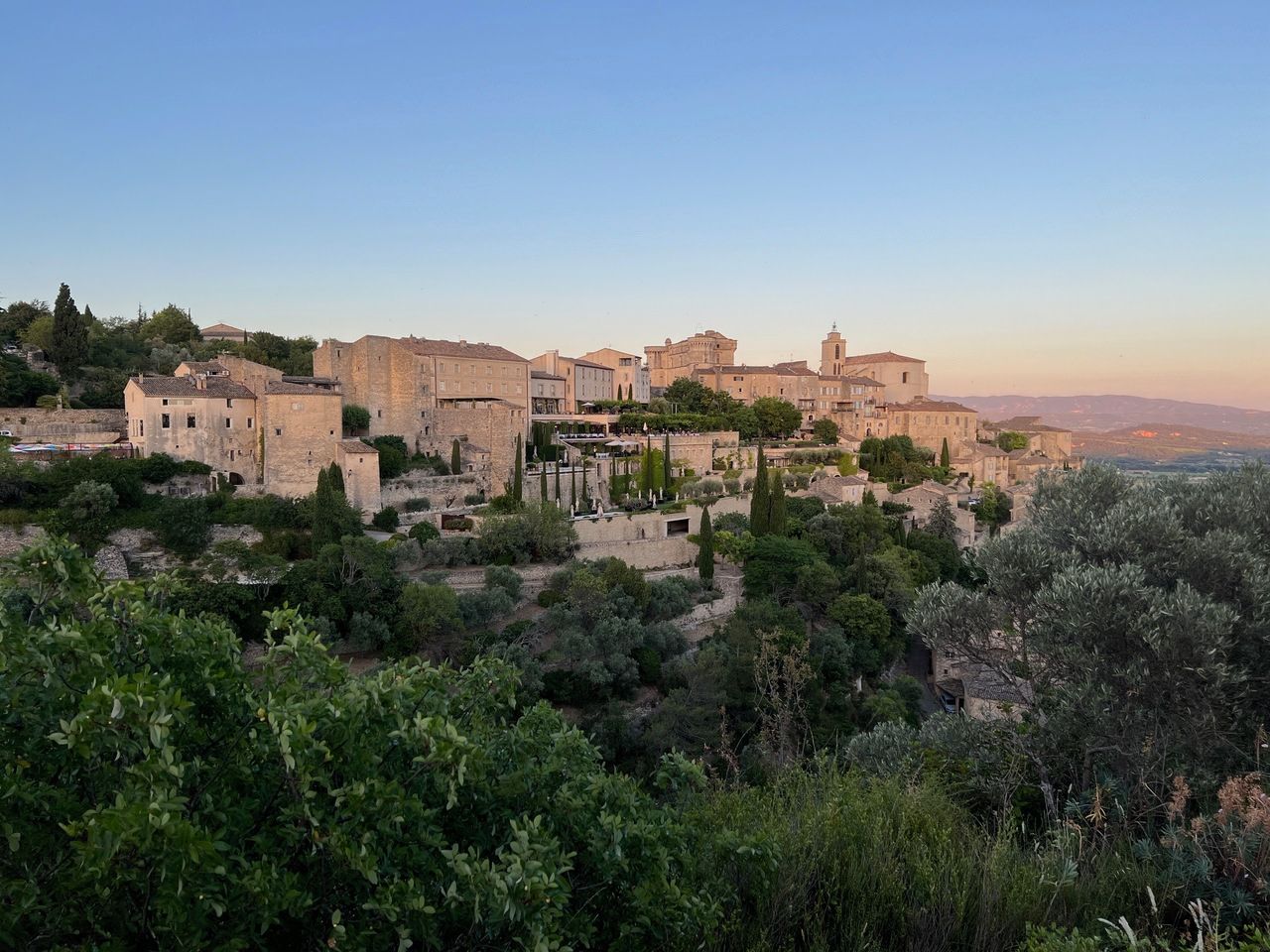 The castle in the center of town. 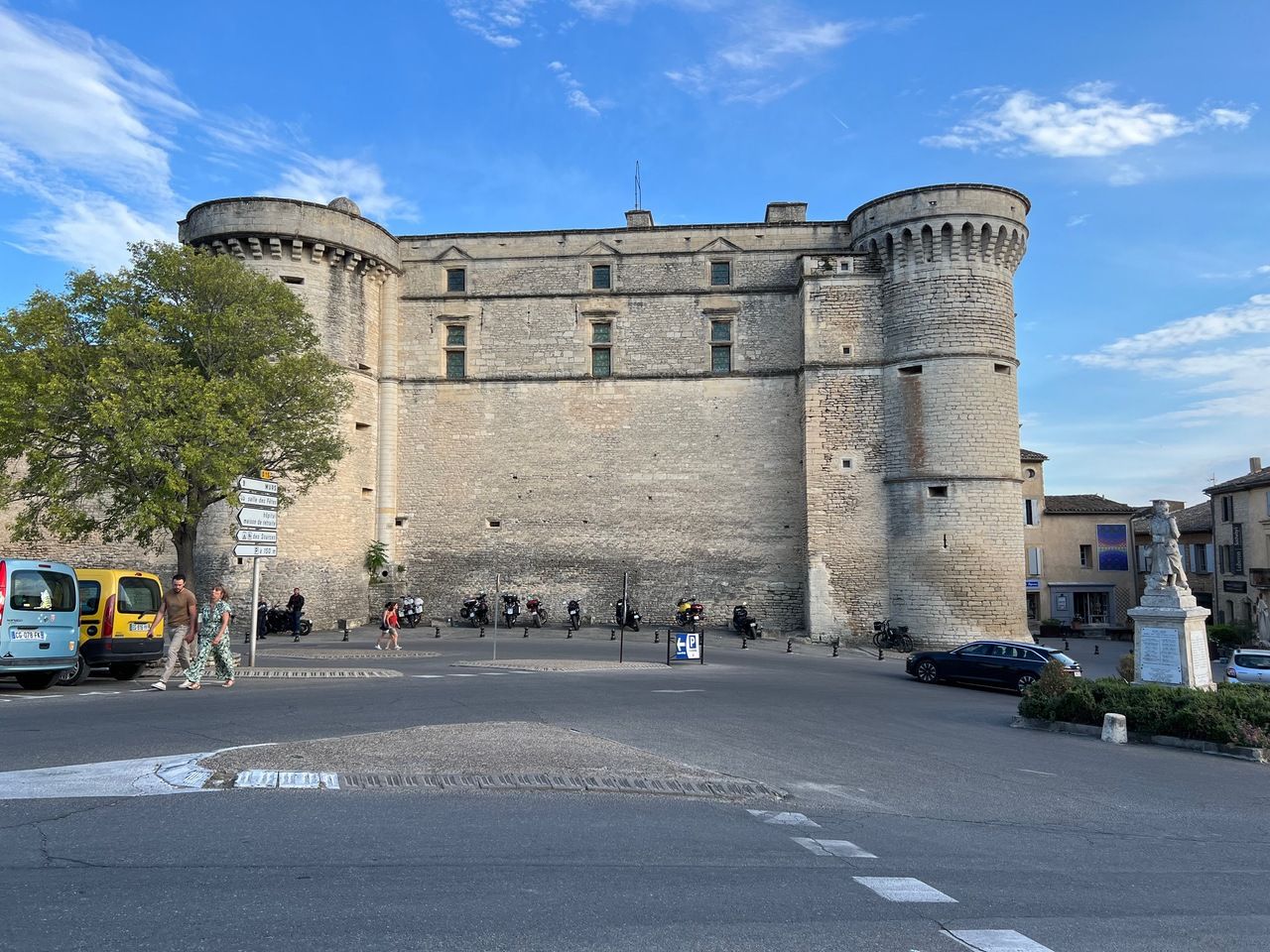 Another shot of the center of town. 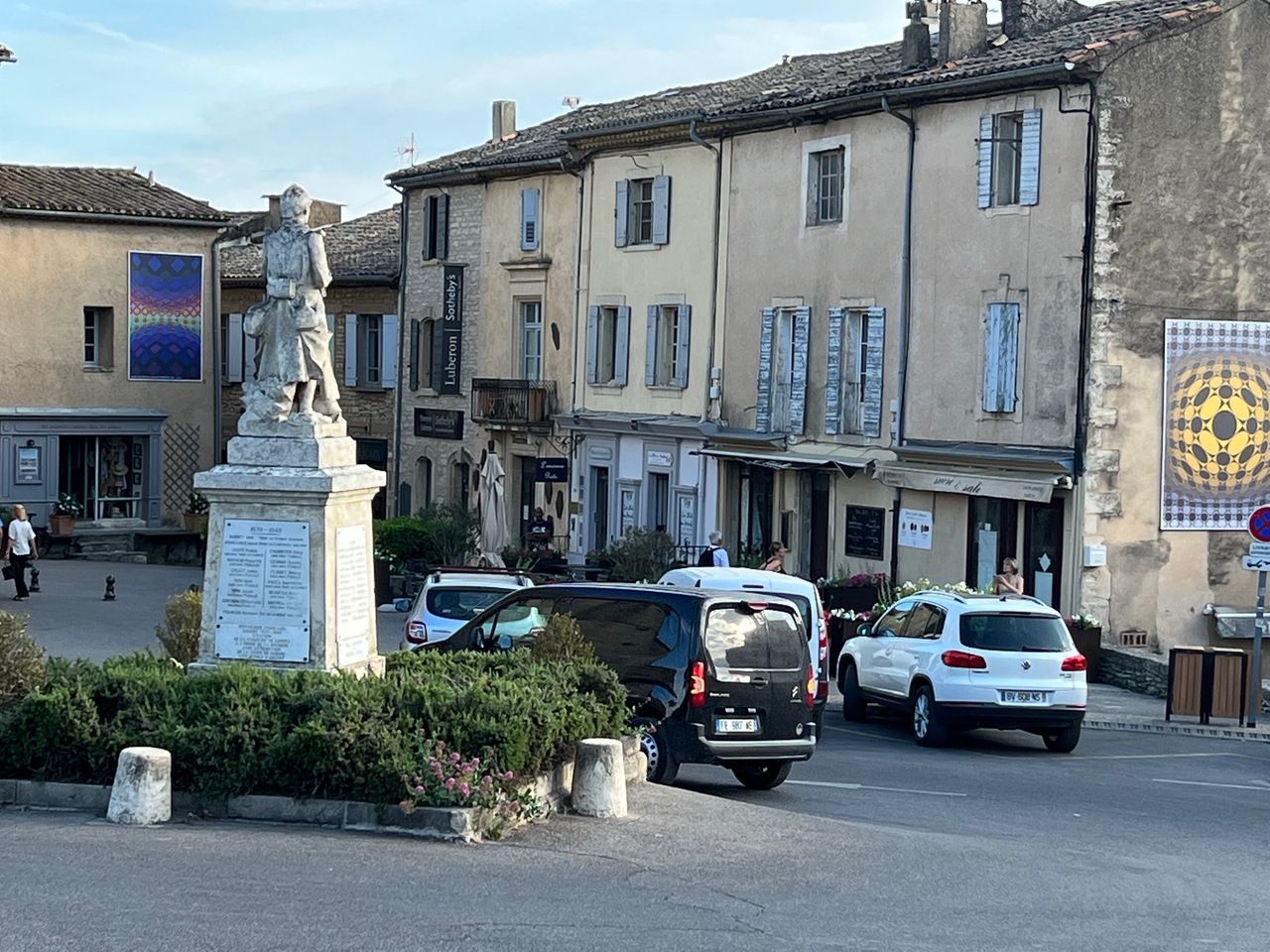 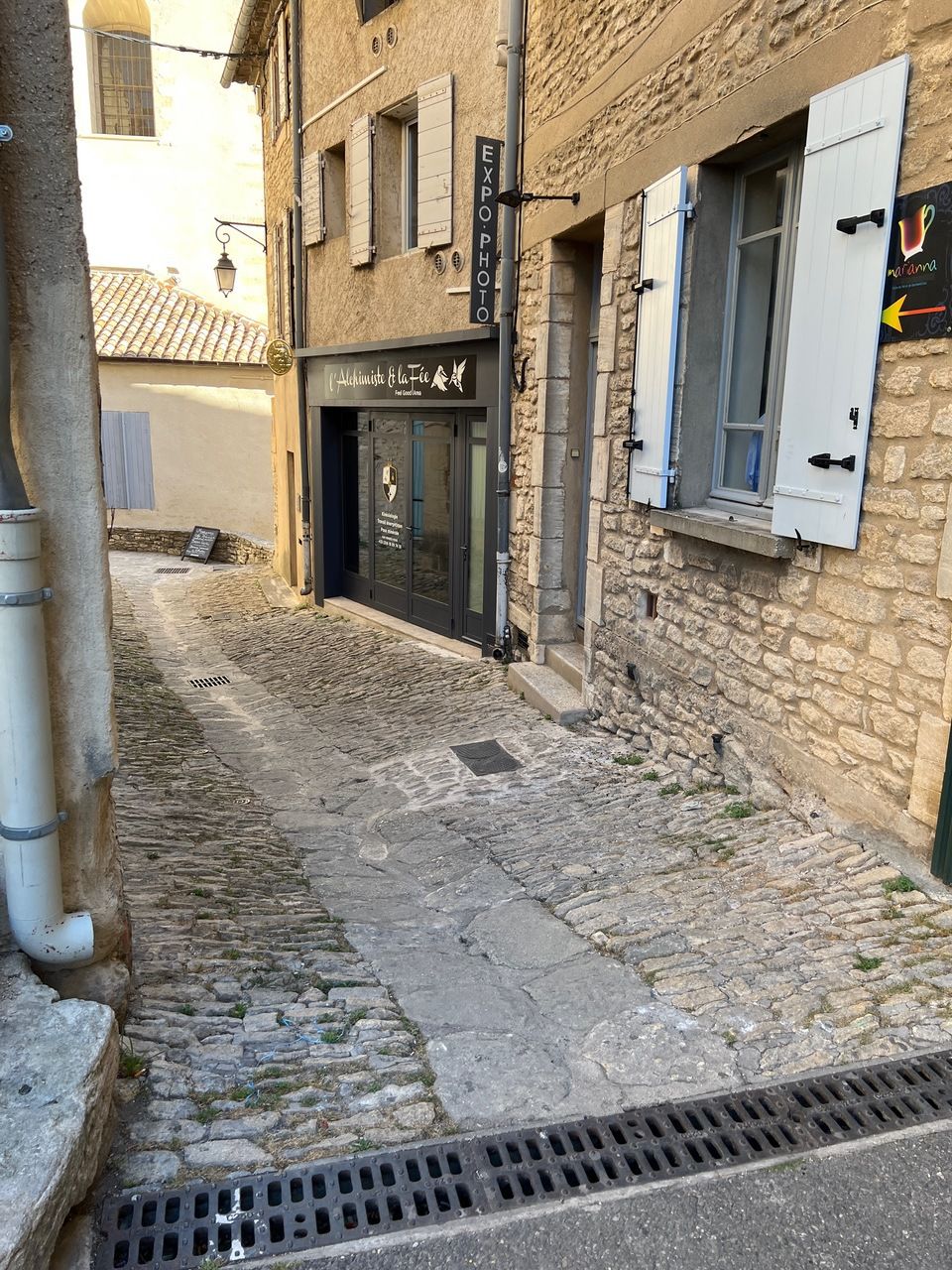 And a lot of steep cobbled streets. 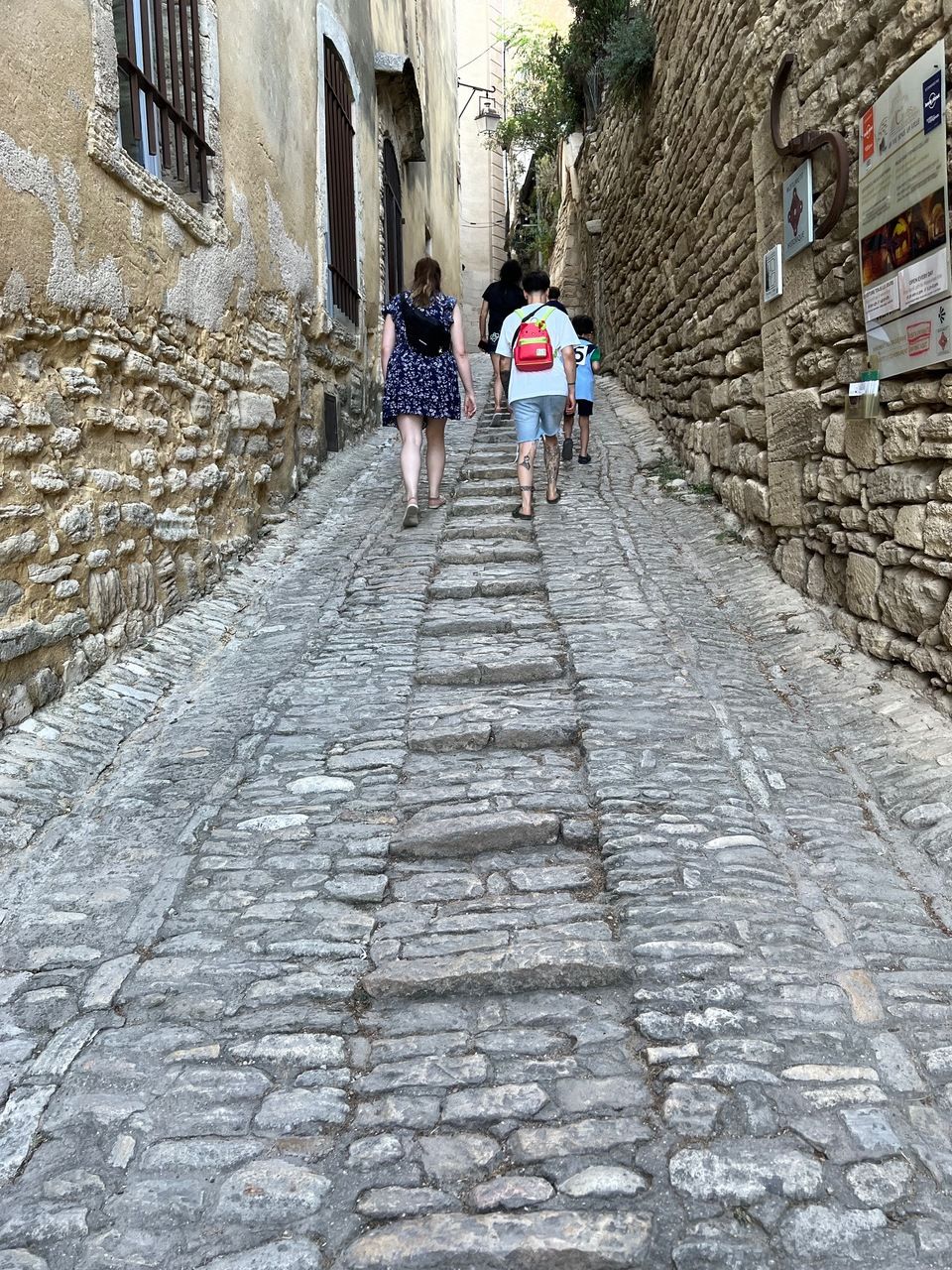 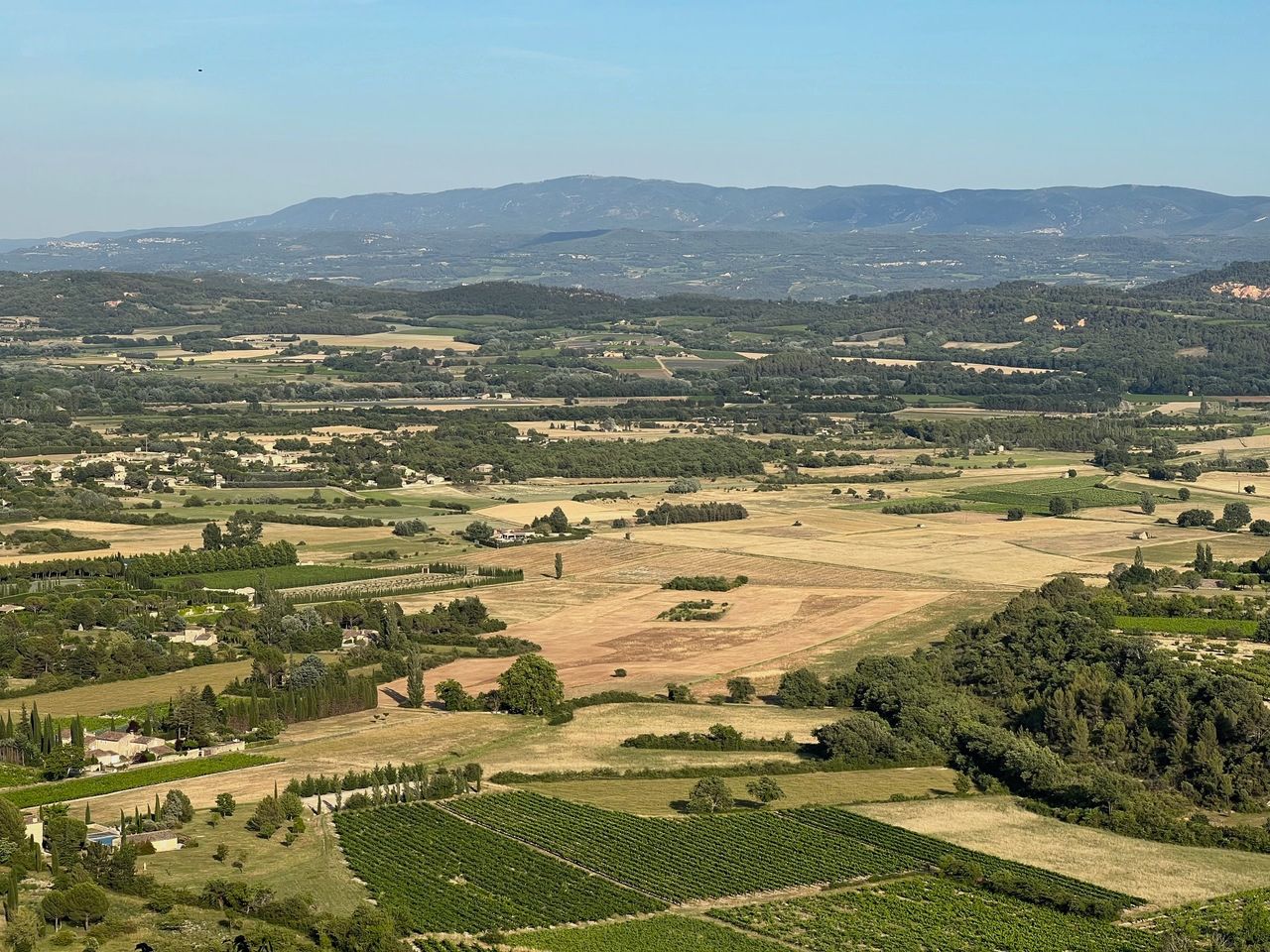 On Sunday, we hiked a classic 6.2 miles (10 km) counter-clockwise loop out of Gordes that includes a stop at the Abbey de Sénaque. This hike was a roller coaster — up to one side of a valley, into the valley, and then back up to the other side of the valley, then down to the Abbey, and then up again to Gordes. This loop is partly on GR, partly on local trails.
It was another very hot day, with a lot of walking in full sun and some shade. The first km was our walk into town, at which point we followed a gradually uphill lane north, with yellow trail markers, and later, yellow and blue trail markers. 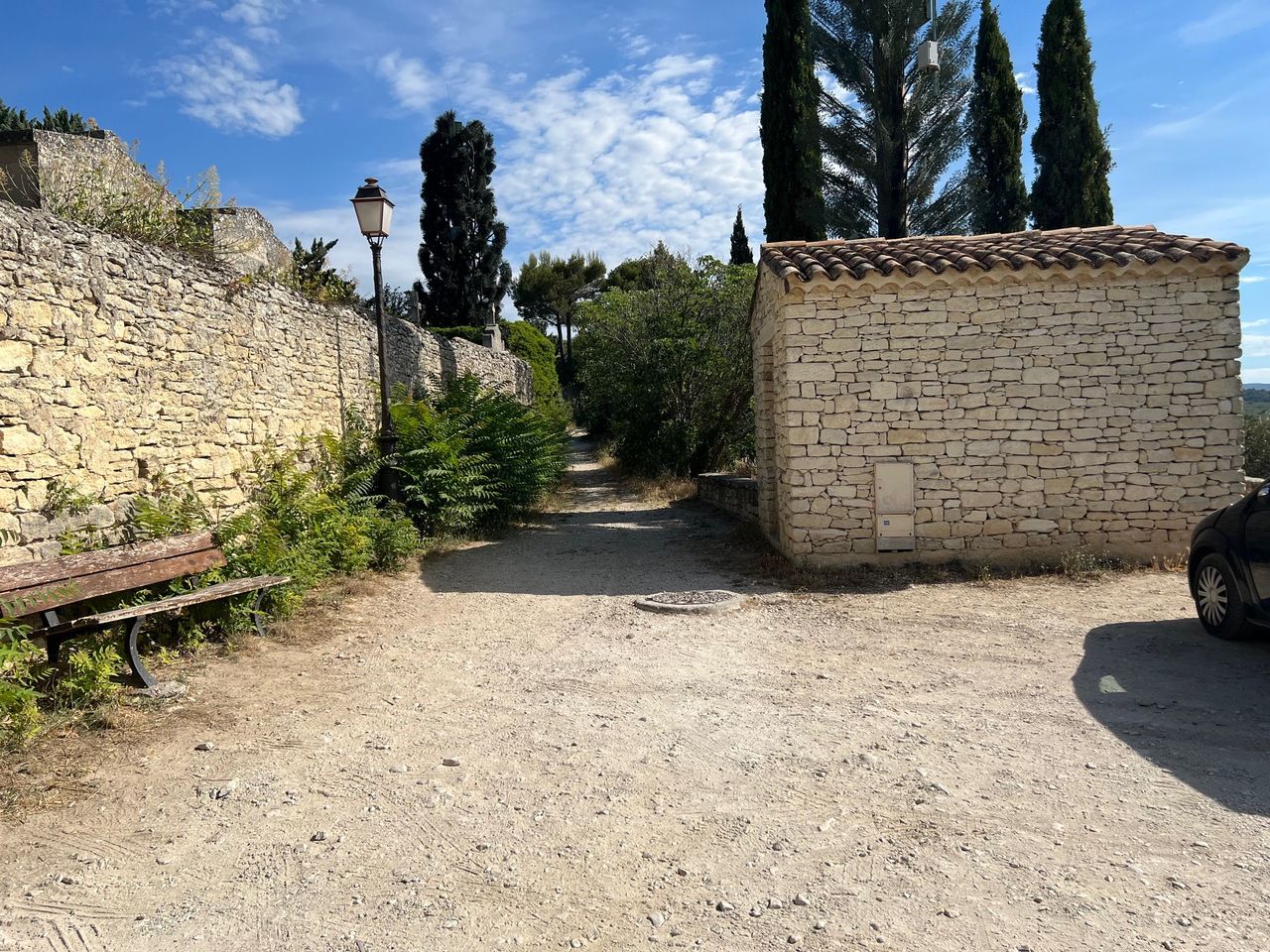 At about 4 1/2 km in the hike, we reached a explanatory sign and panoramic view of the Sénancole Valley. We could also see Mont Ventoux, Provence’s highest mountain, off in the distance (picture on another day). 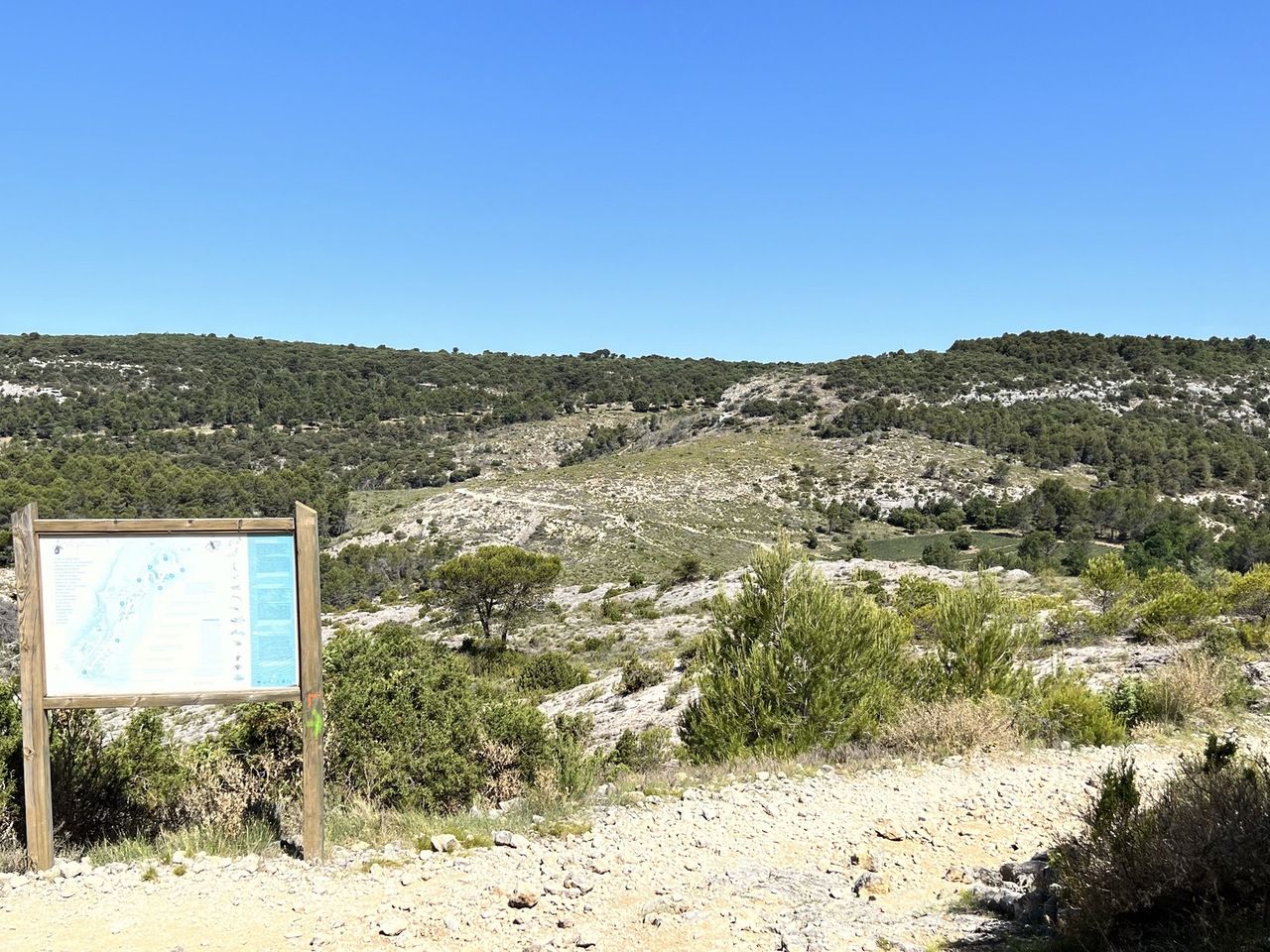 Looking across the valley to the other side. 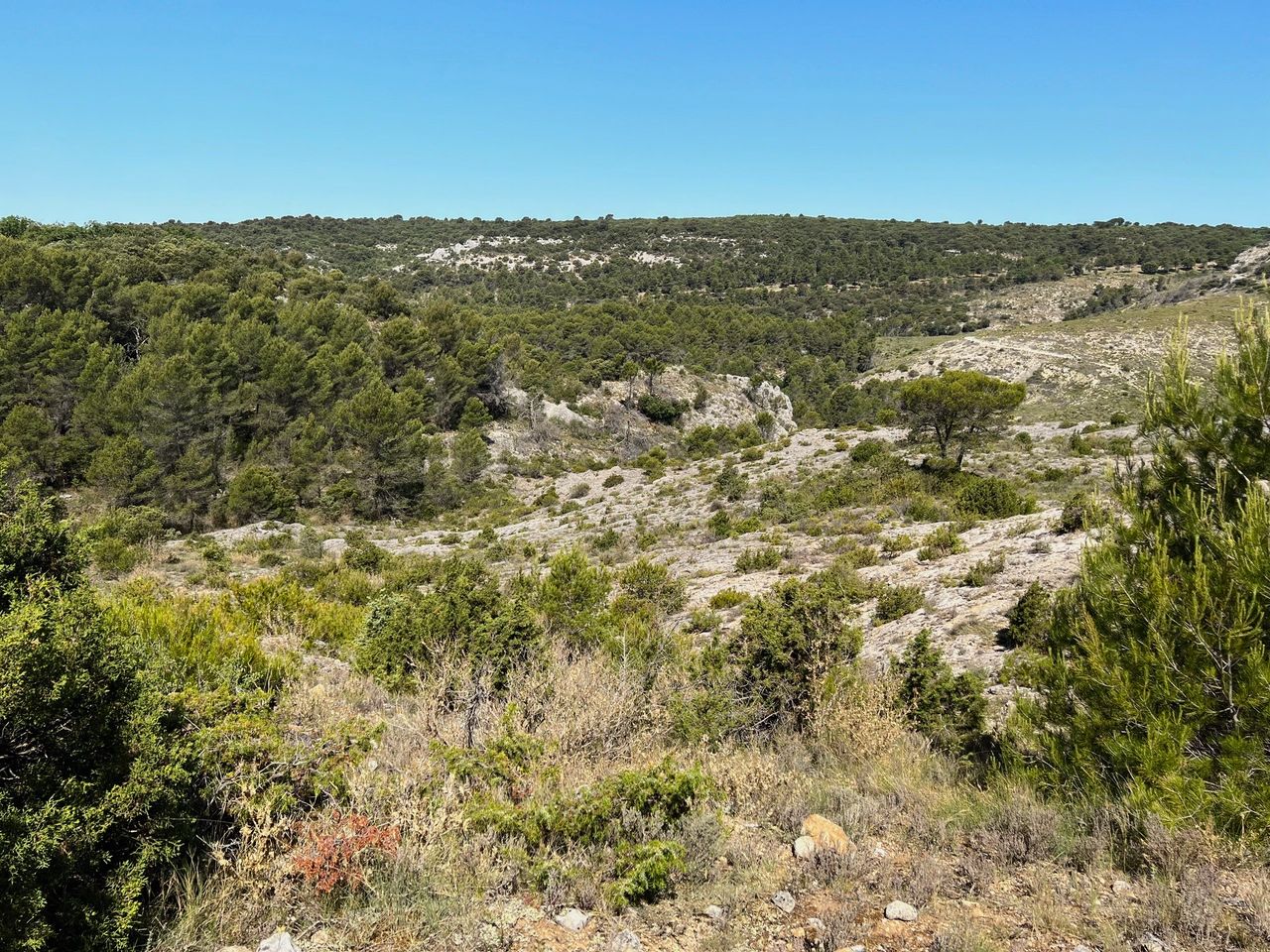 Larry looking out over the valley to the other side. 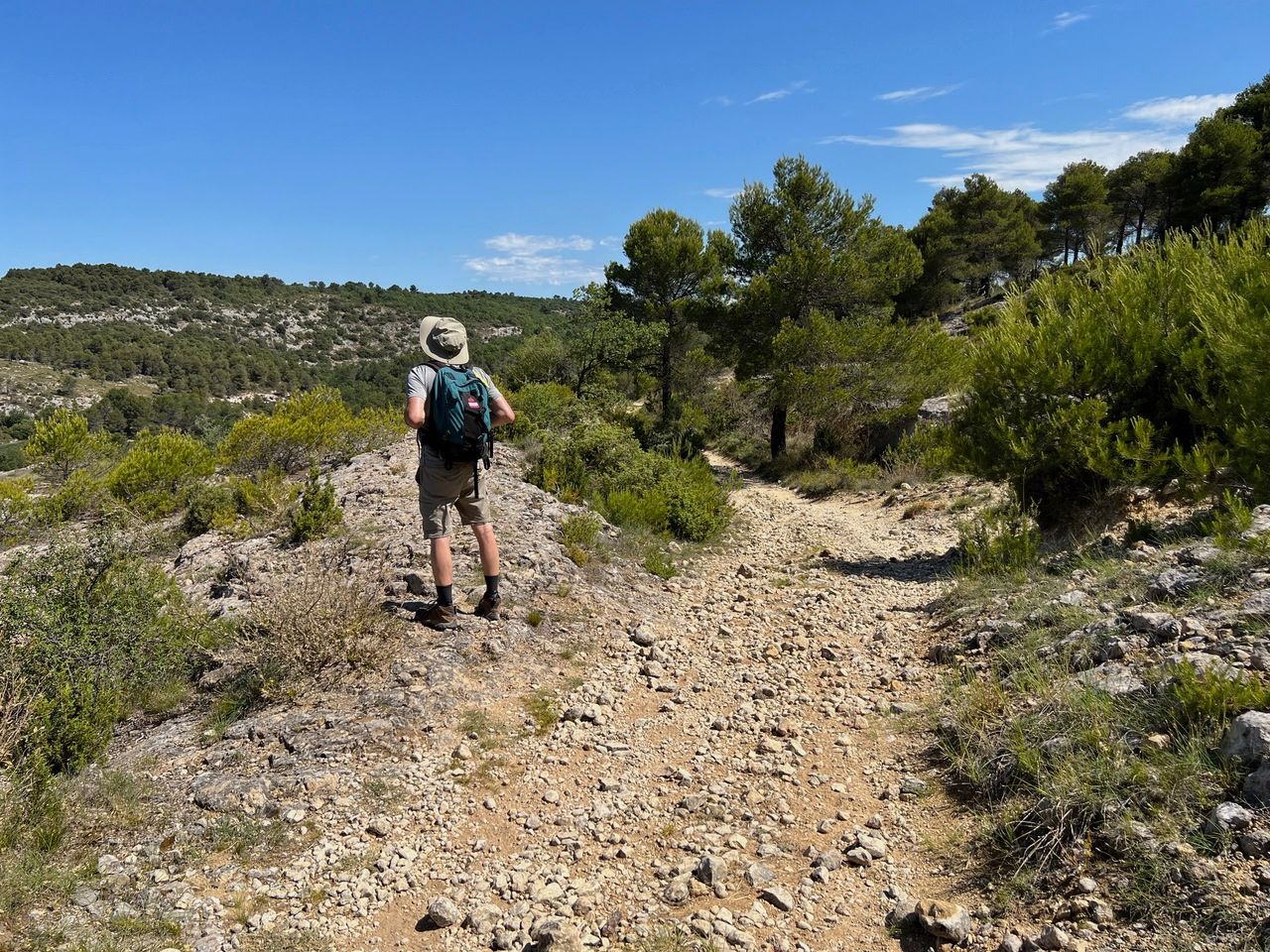 We then descended into the base of the valley, curved left, and climbed out at ≈ 5 km into the hike. We looked across the valley and took a picture of the sign. 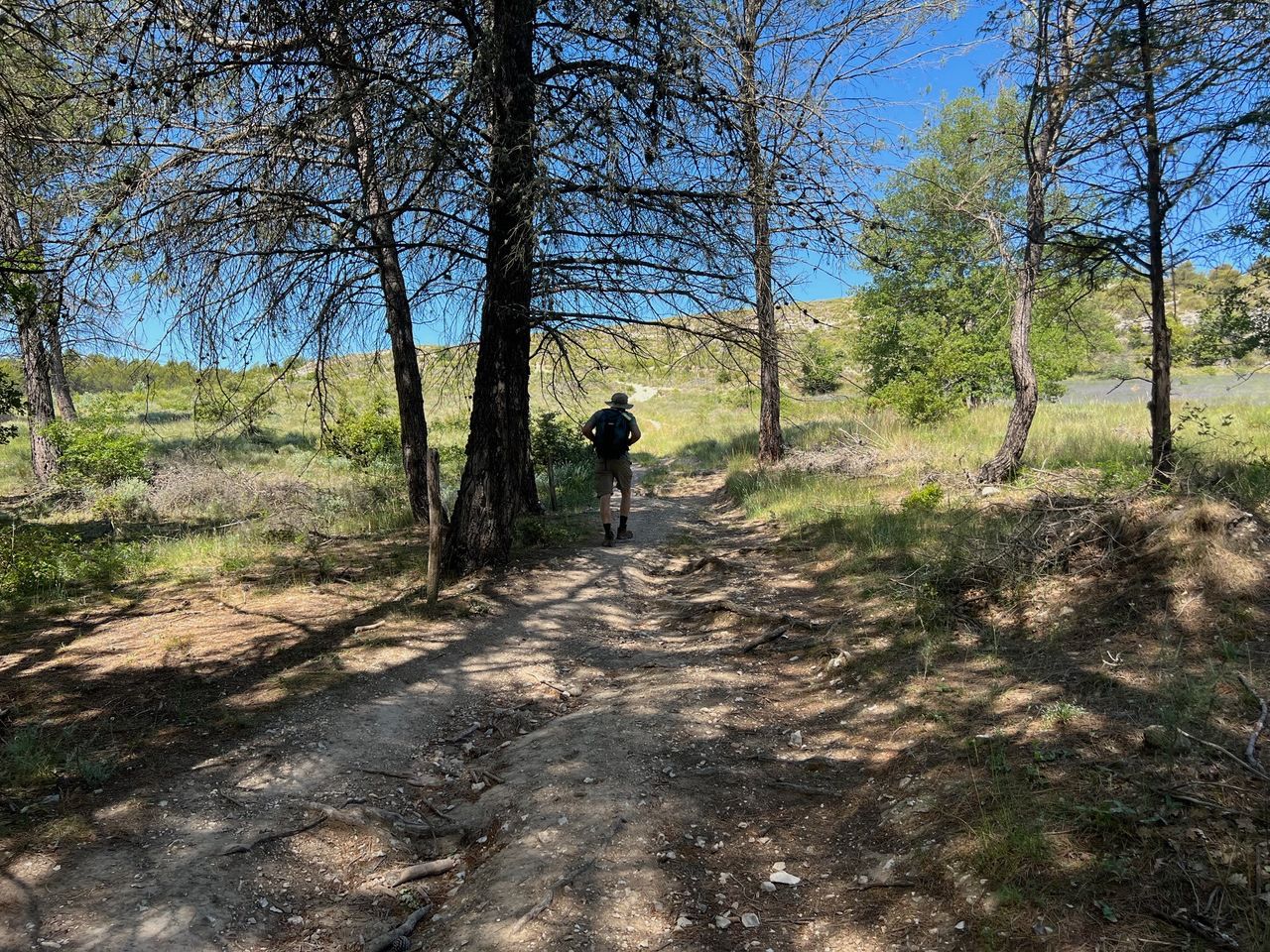 Heading back up to the other side. 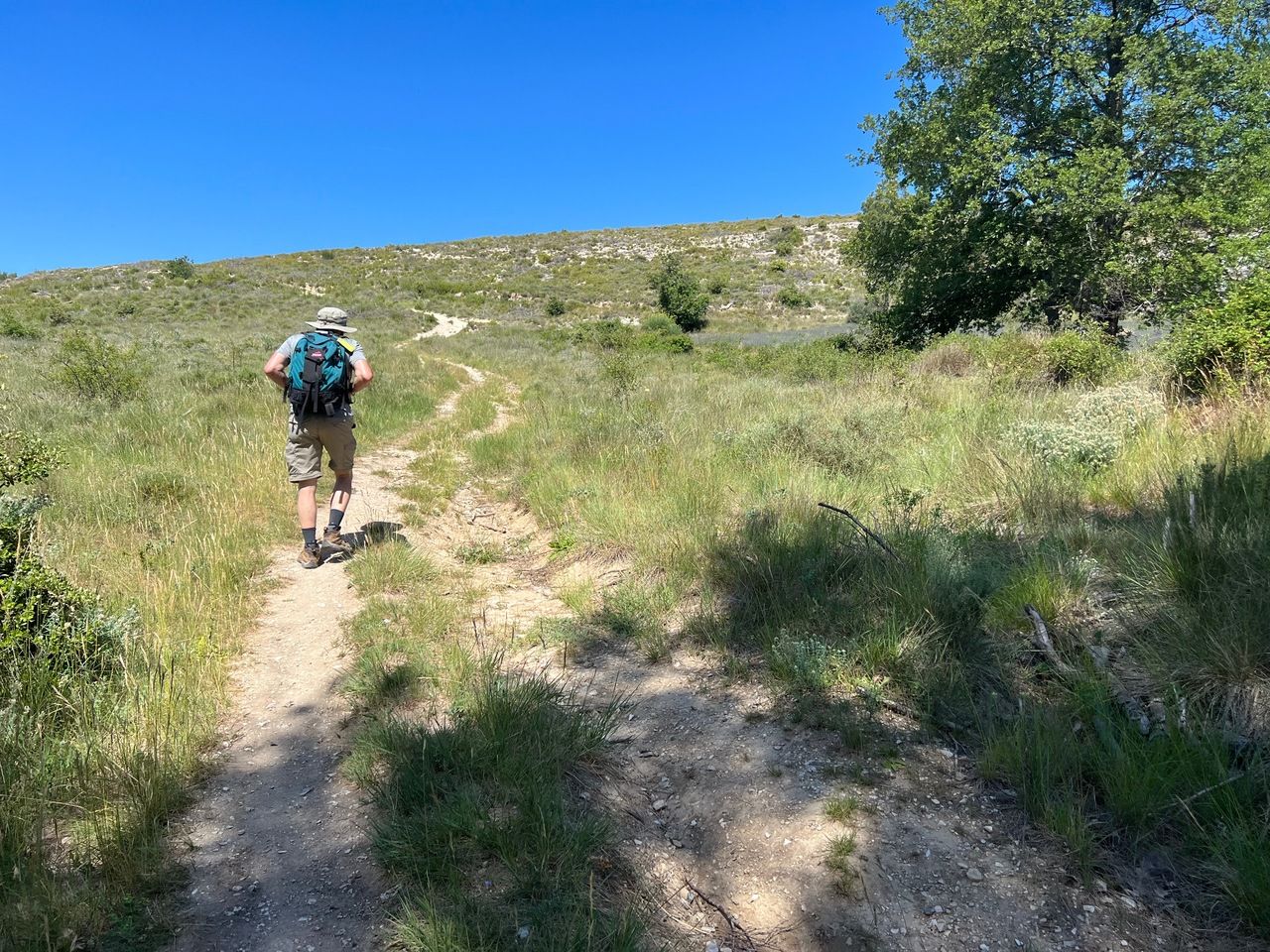 Looking back across the valley to the sign on the hill. 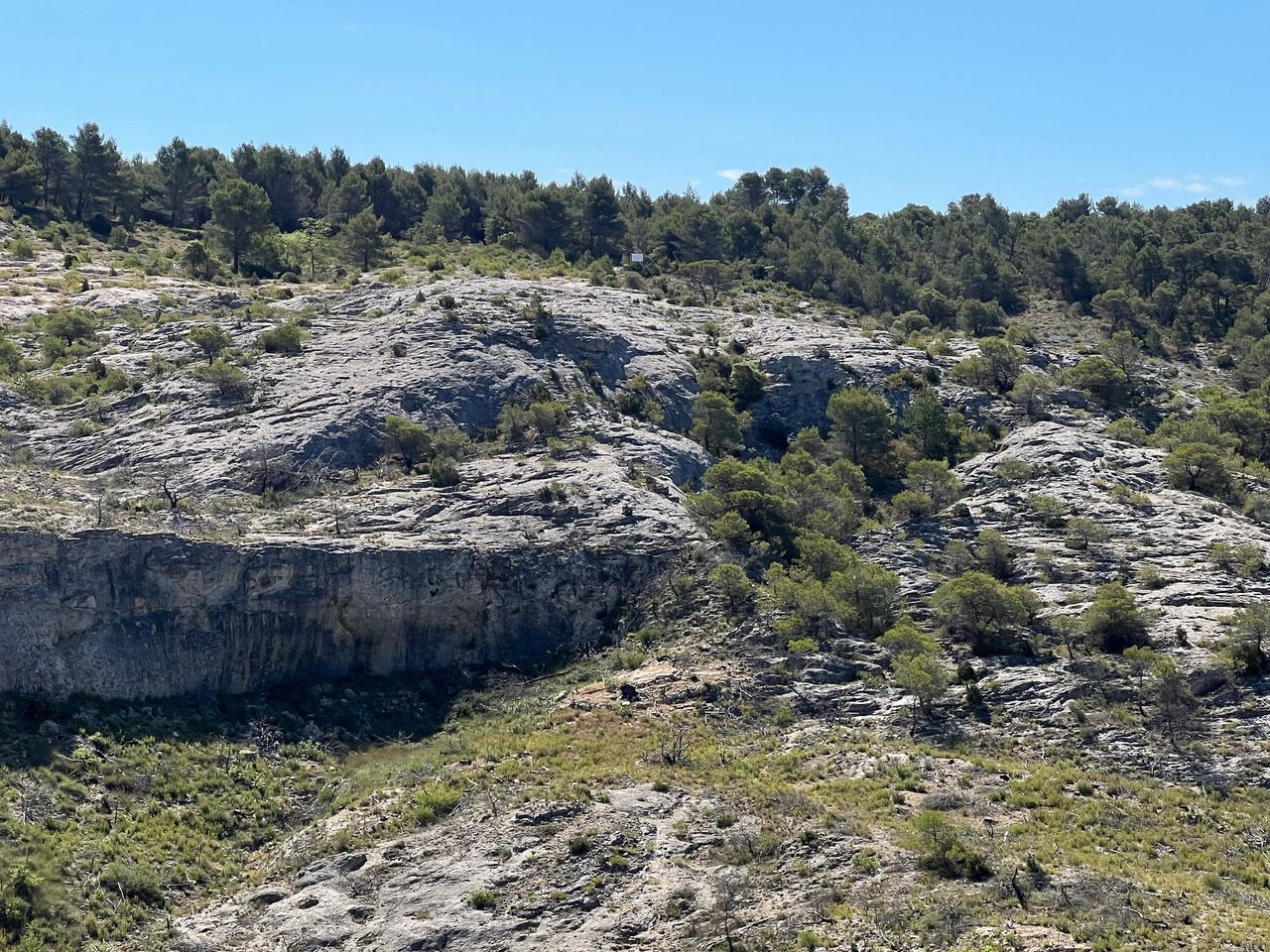 At this point, we were close to the top of the loop and about to head southwest and south. Just before the track began to climb, we took a left that descended gradually. Not quite reading the instructions right, that left was a parallel path to the one in the step-by-step book, but it merged with the correct path as we leveled out.
We walked left of a young olive grove, and then reached an old Provençal farmhouse, at which point we headed down the few steps of a grassy slope, took a left fork down a trail to the Abbey and the main road. This was at about 7 km into the hike. 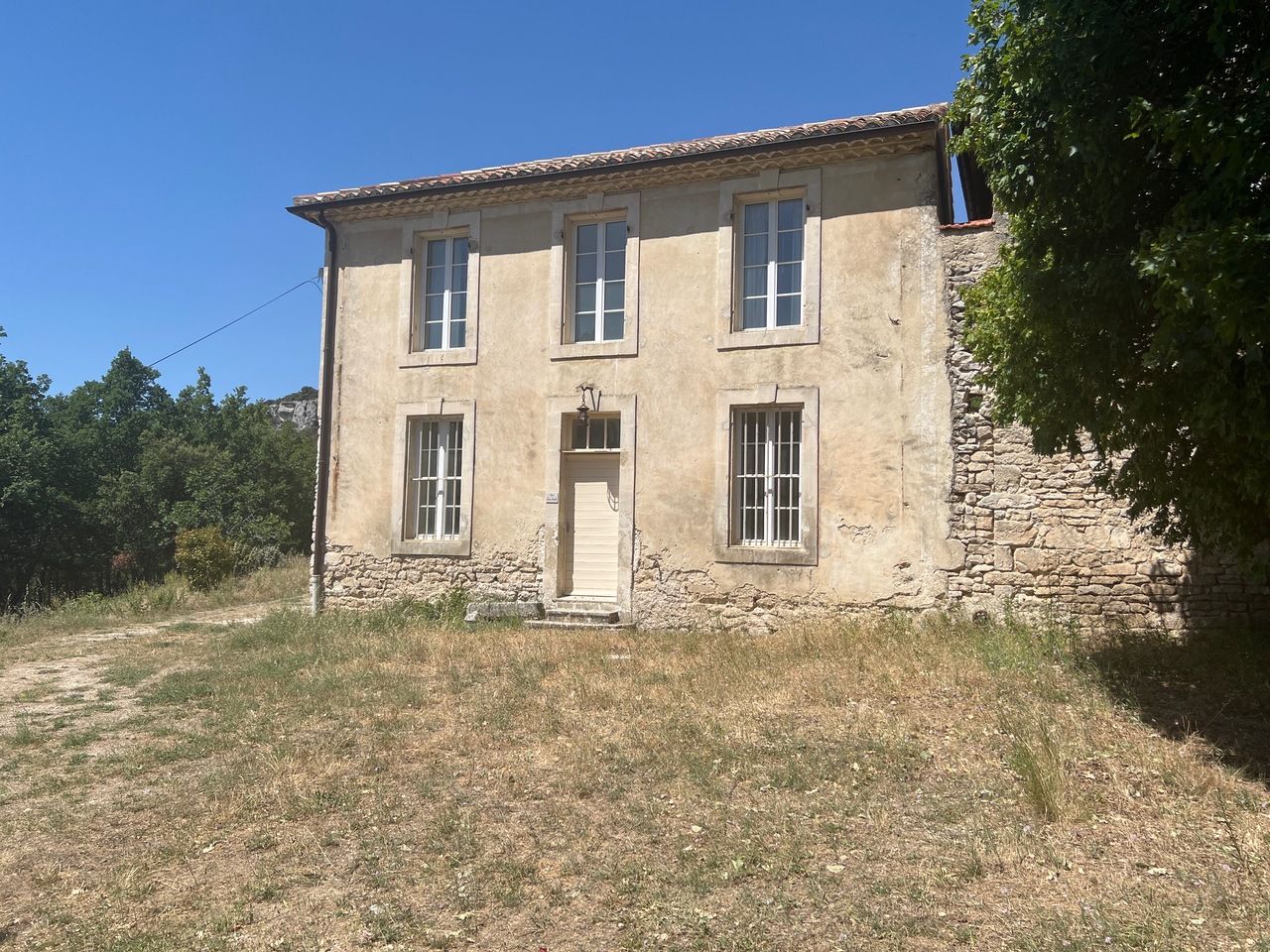 We crossed the main road and through the entrance gates of the Abbey and down the paved driveway to the Abbey. We wandered a while, had a snack, took pictures, etc. 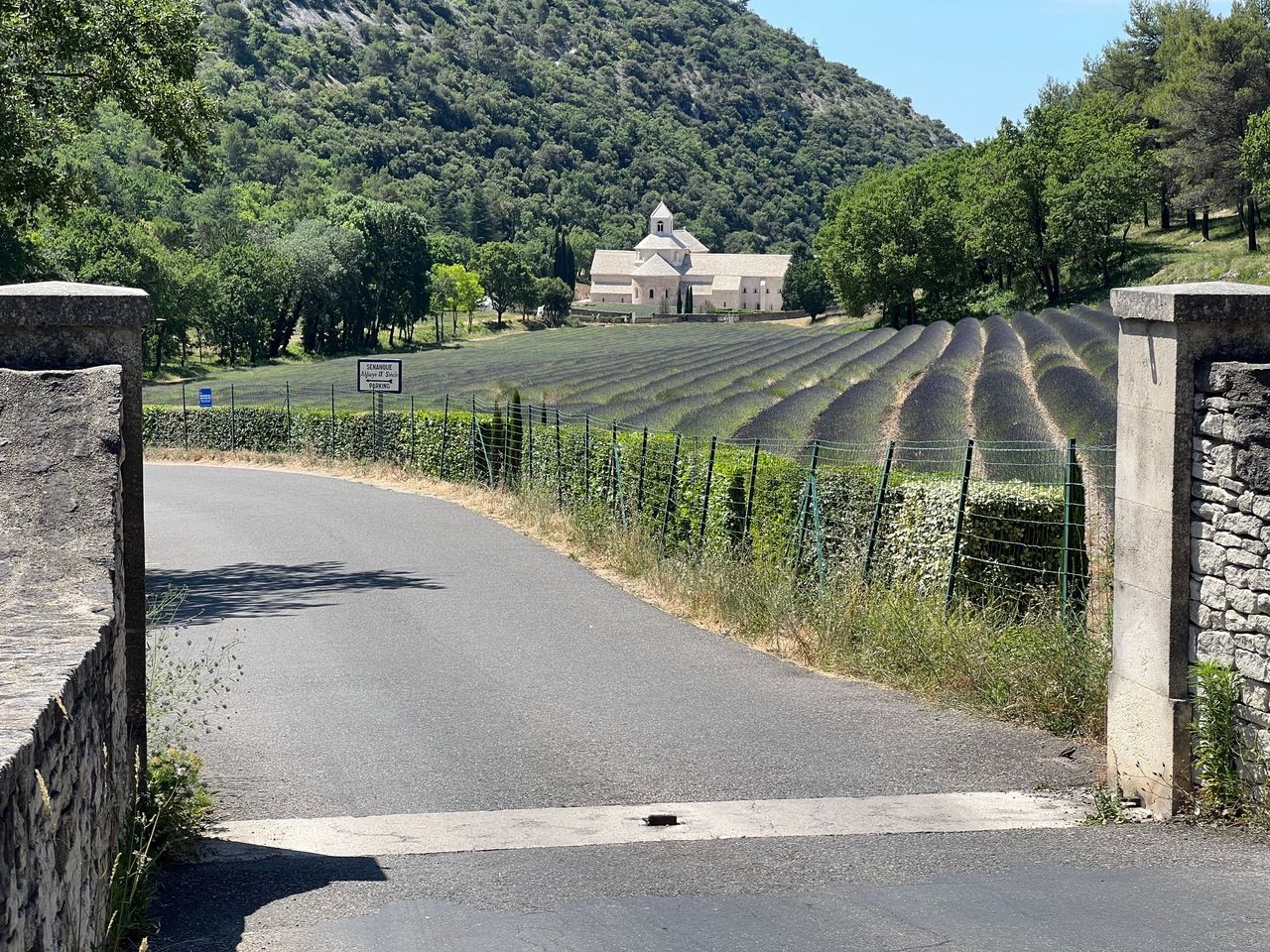 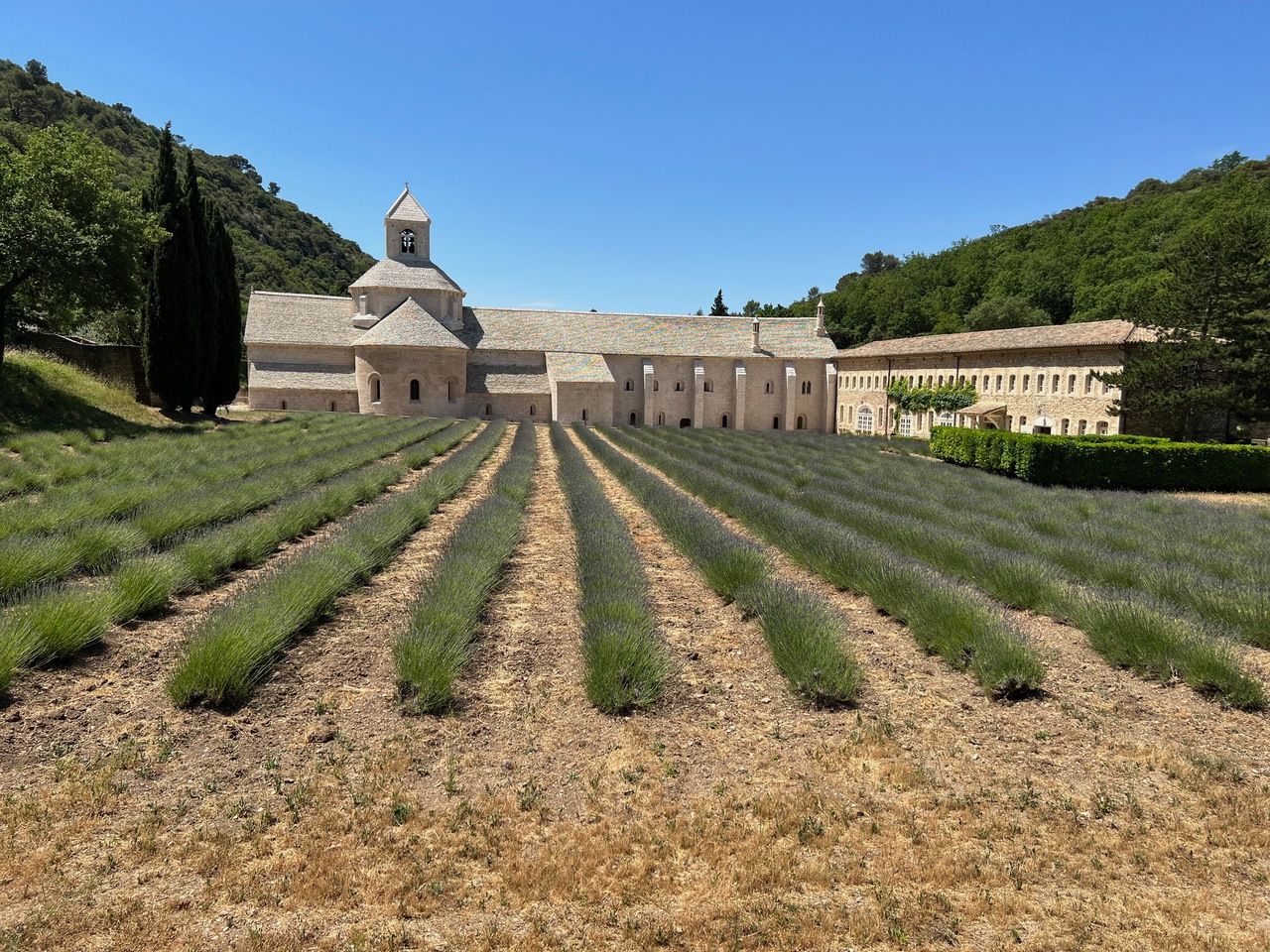 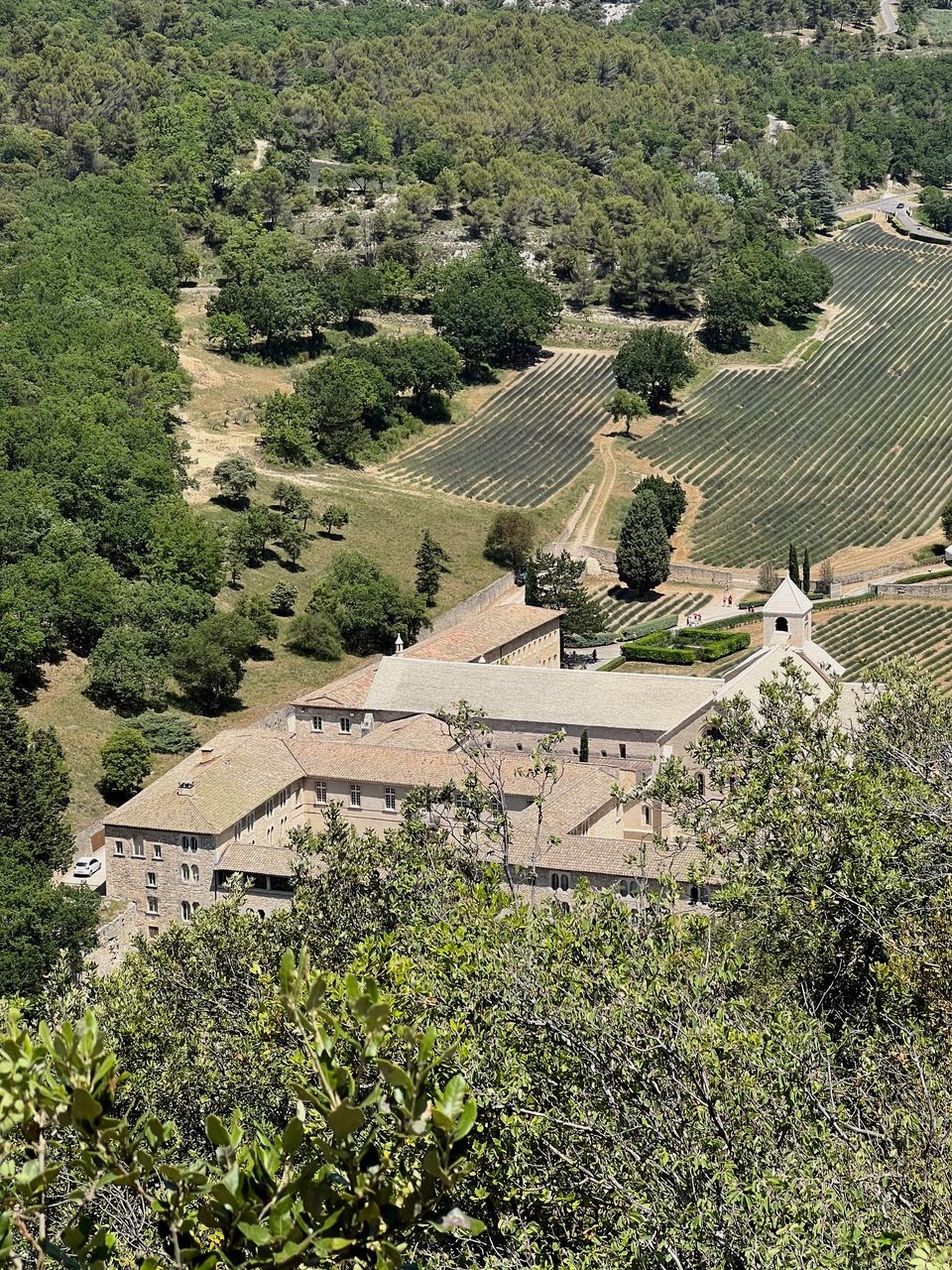 View from the climb back up to Gordes. 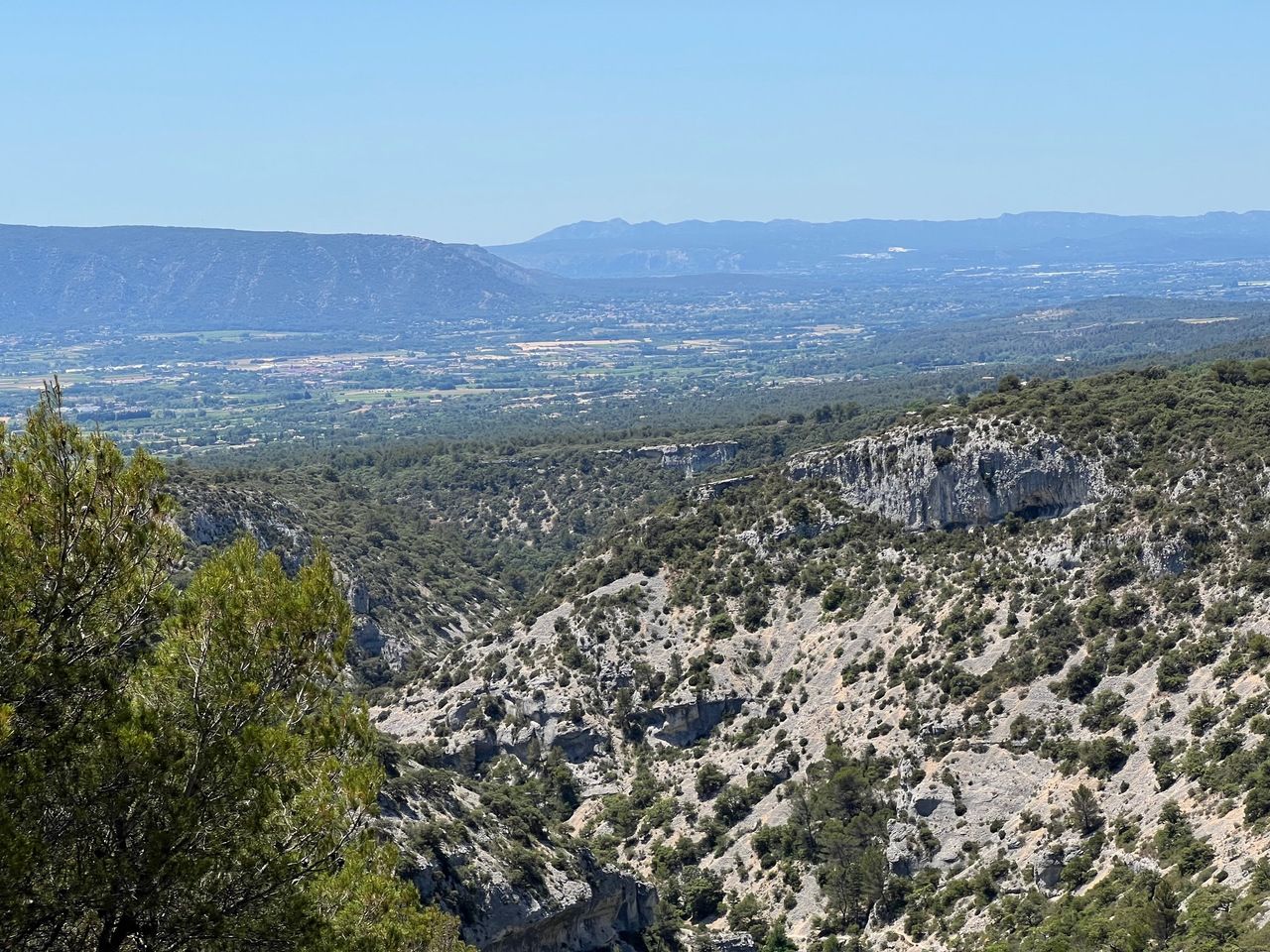 We eventually arrived at the main road, and then turned right off the road at the Côte de Sénacole yellow hiking sign post, descended a bit, and followed the instructions back to our B&B. The entire hike was about 10 km (6.2 miles).
Our route. 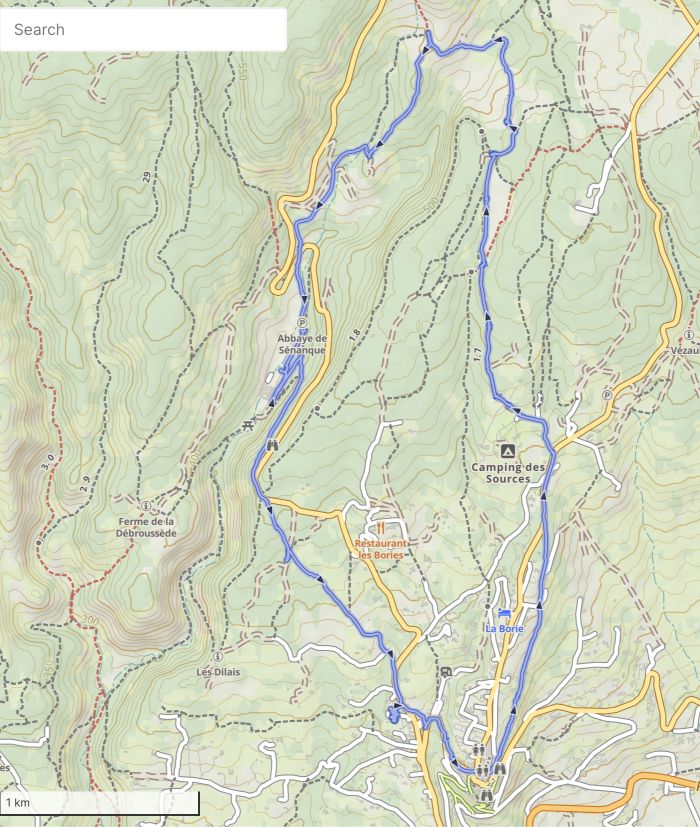 Published by Eileen and Larry Samberg on June 12th, 2022