The next temple was Ta Prohm, the home of Lara Croft, Tomb Raider. With tree roots growing all over the place, including strangler figs.
"Perhaps the most evocative and mysterious of all the temple structures at Angkor, Ta Prohm (which means Ancestor of Brahma) was a wealthy Buddhist monastery built during King Jayavarman VII's reign (1181-1218. During the Colonial period, the French started an archaeological restoration of the temple, making a deliberate attempt to maintain the structure as they found it, by limiting restoration and cutting down little of the surrounding dense jungle. As a result, the temple buildings remain smothered by the roots of giant banyan trees, preserving the atmosphere that 19th-century explorers must have experienced." 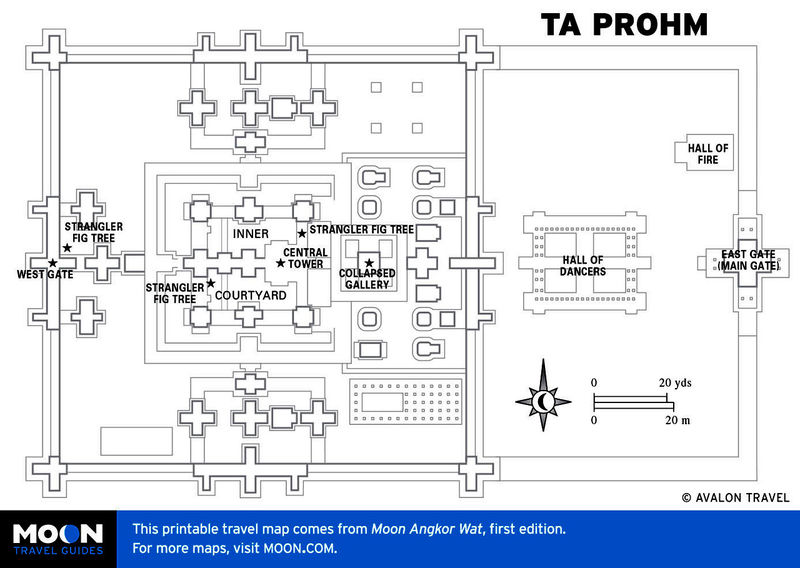 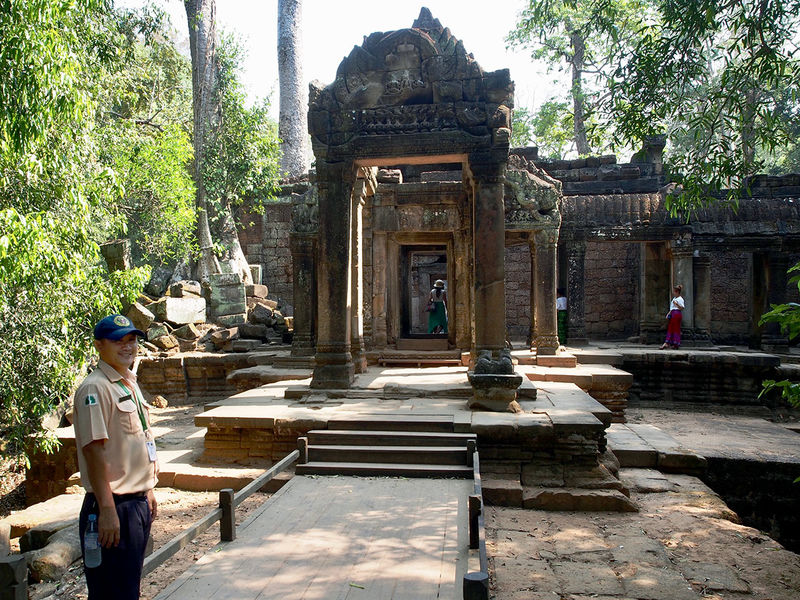 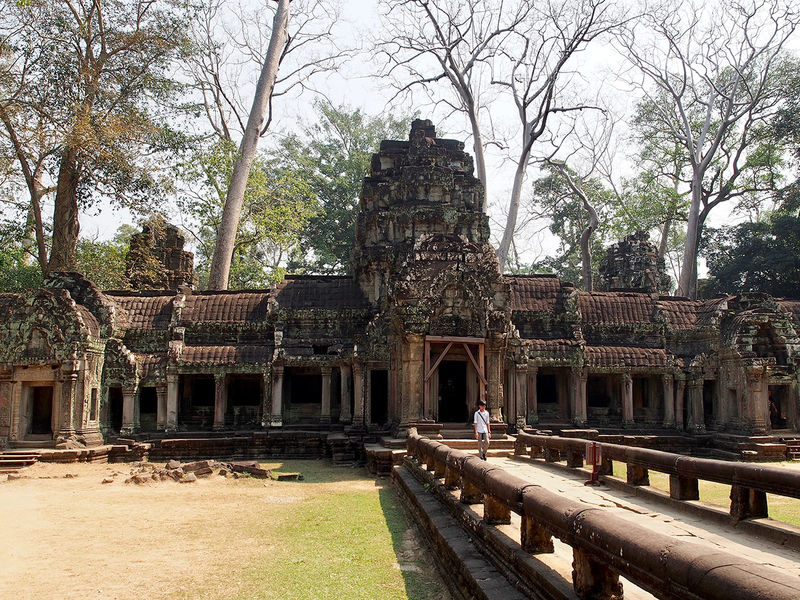 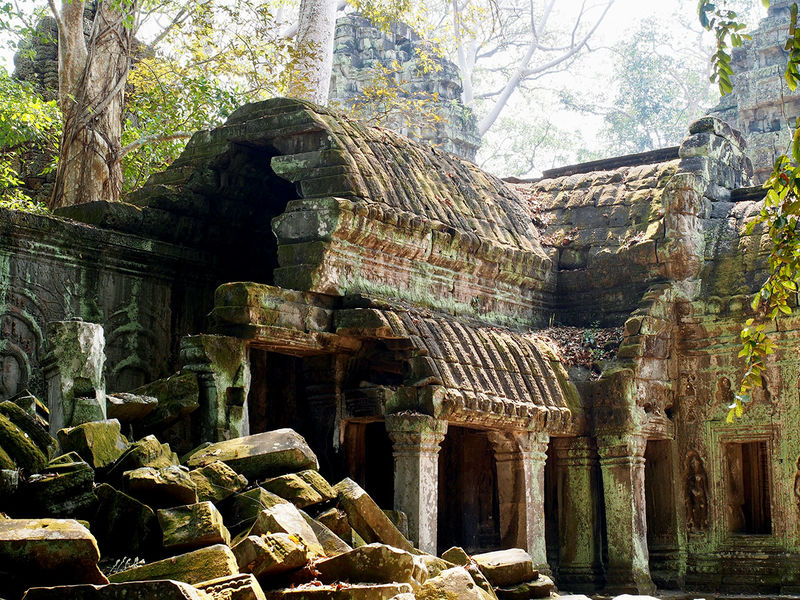 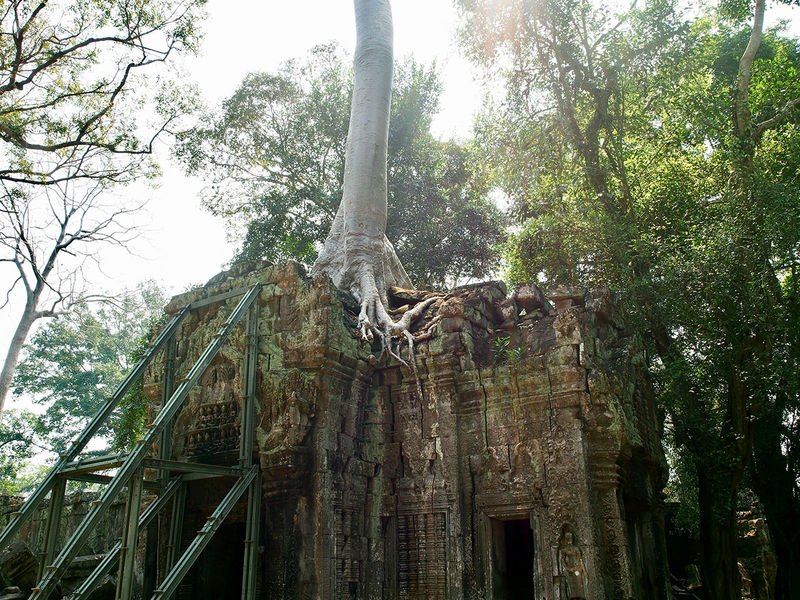 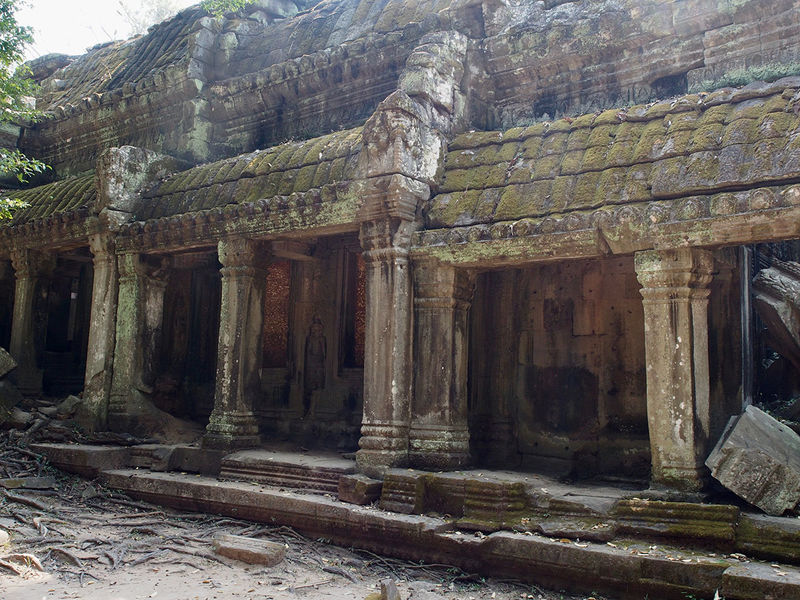 One common architectural element of all the Angkor Classical period temples is the window design, always with an odd number of elaborate cylindrical columns inside the window. There are also fake windows that have the columns but have no opening between the columns. The windows can been seen in the picture below but read on to Banteay Srei to see a closeup. 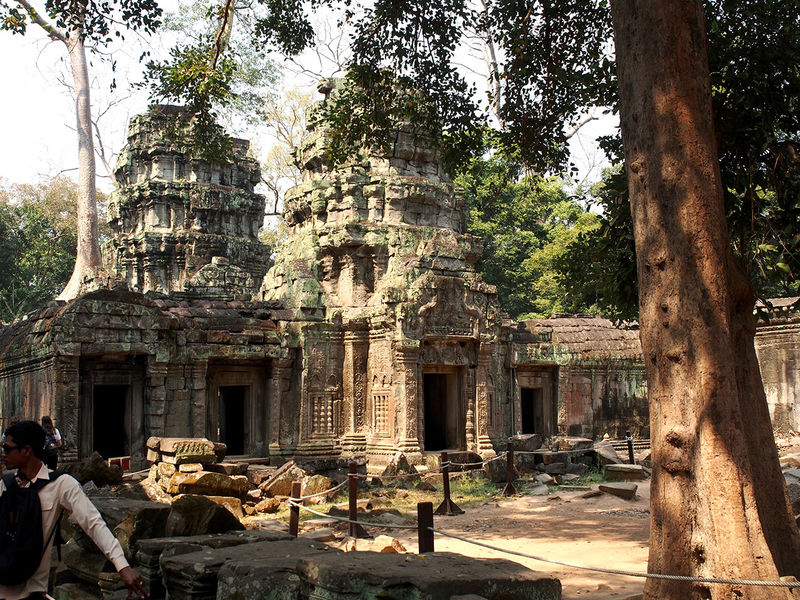 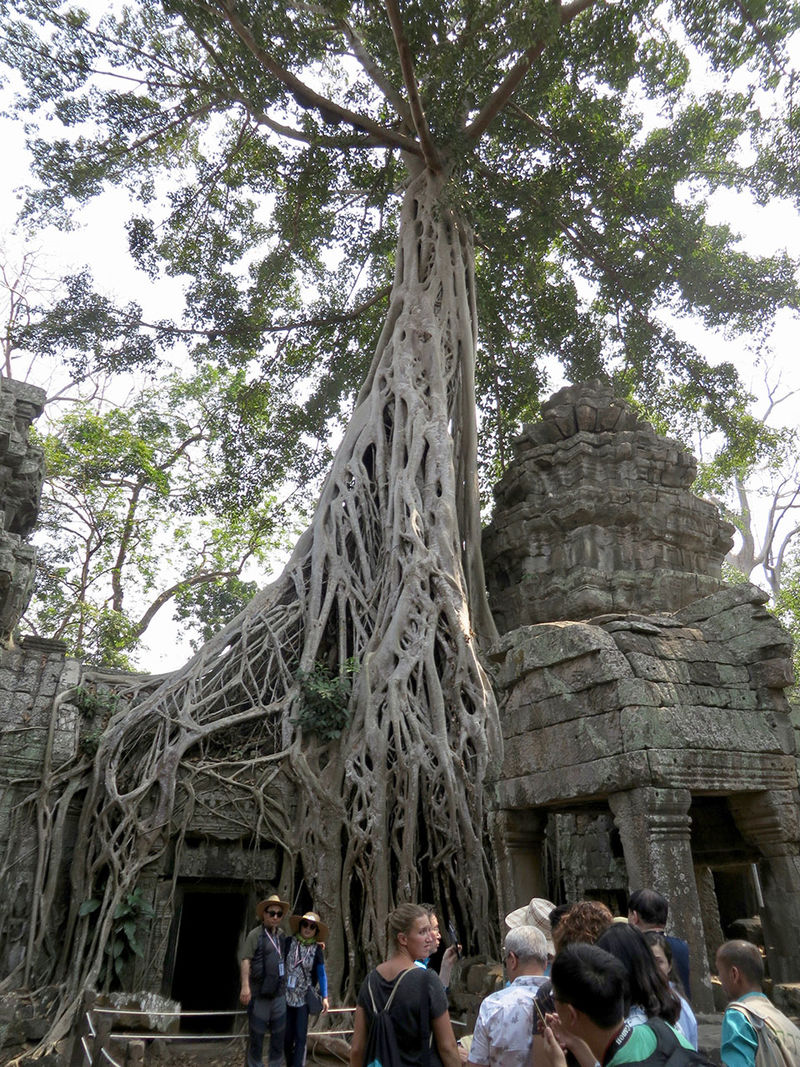 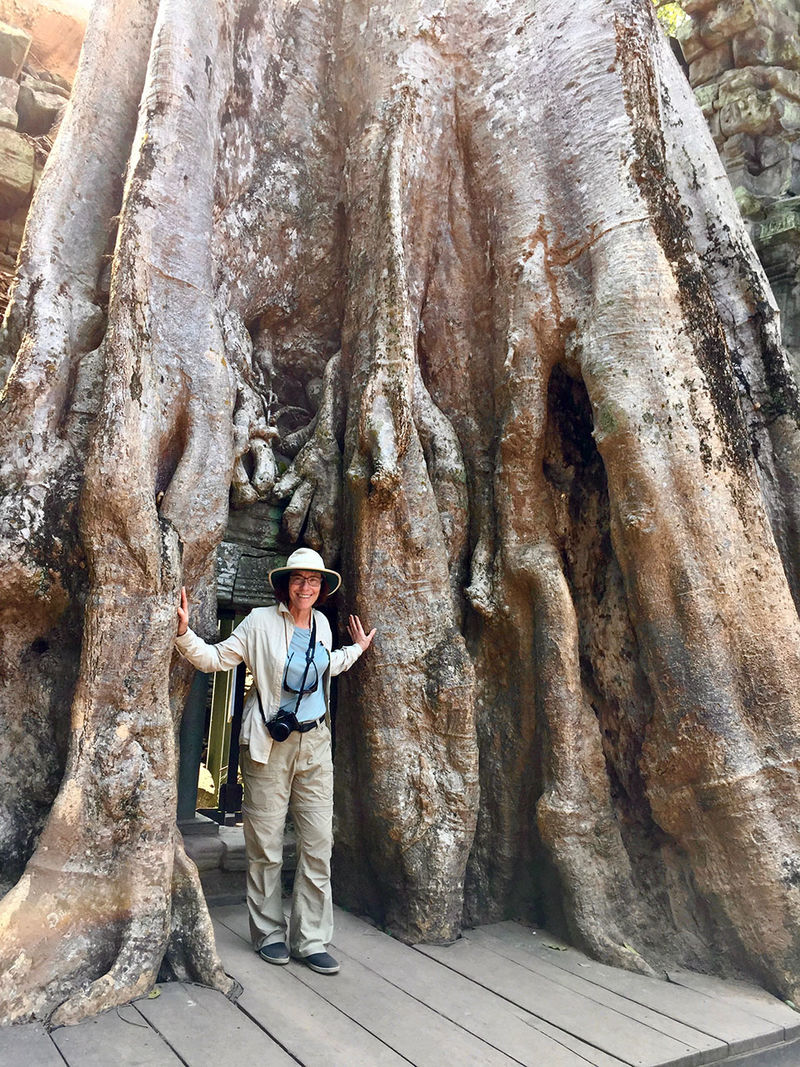 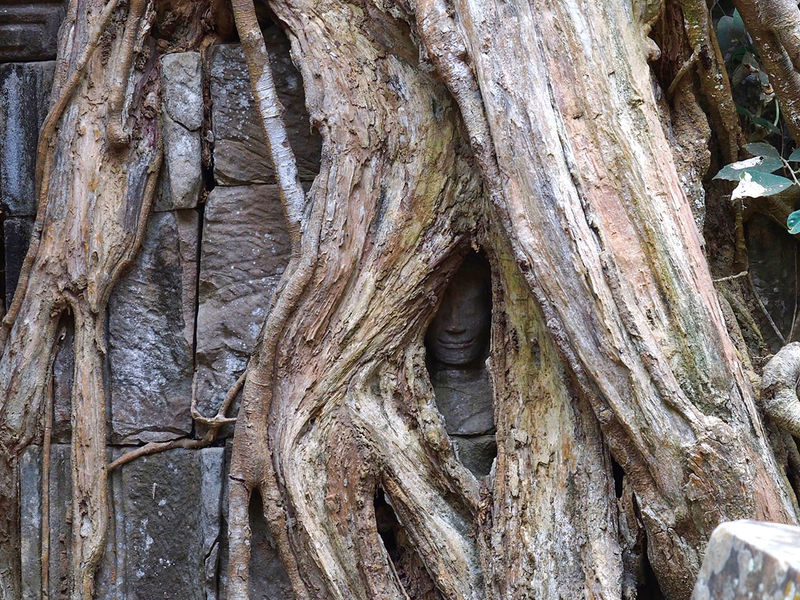 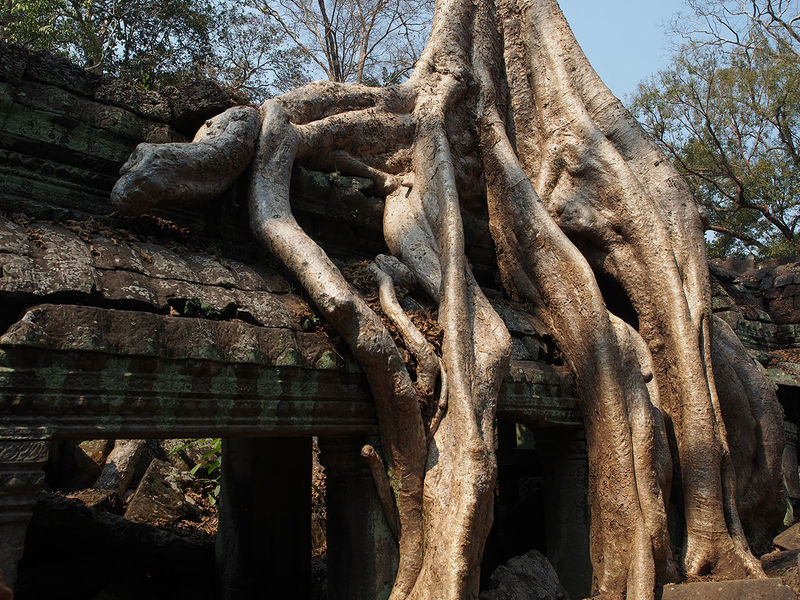 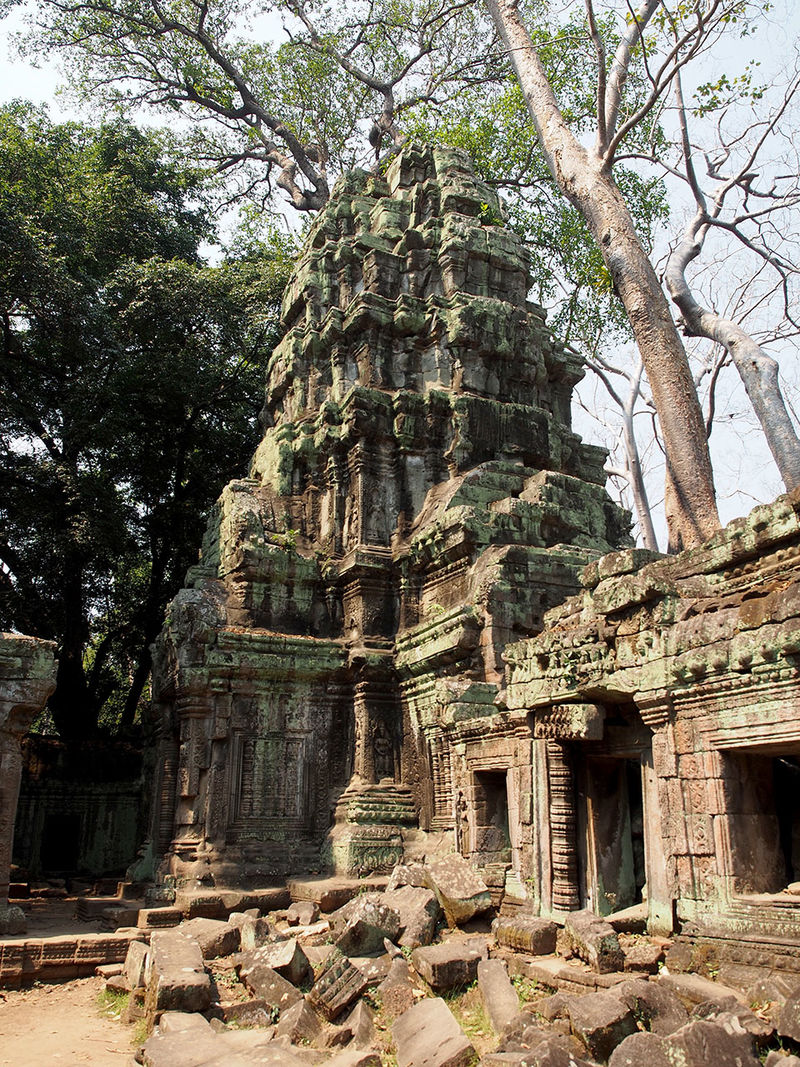 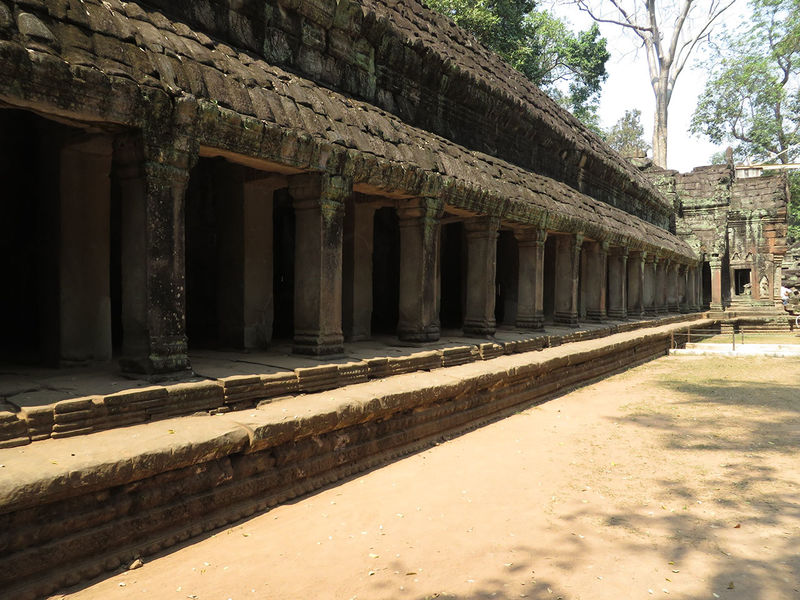 We had lunch at Samroh Srah Srang Restaurant in Srah Srang Village. The downstairs had AC, but we ate upstairs where there were fans and a nice view. We had amok (coconut-based curry) and Lok lak beef (which comes with a fried egg).
We then stopped at a small outdoor stand selling palm sugar, where we bought some sugar and a few palm wood items, and where Mony showed us the village well, which was installed as part of the Angkor Well Project.
We then went to Banteay Srei. 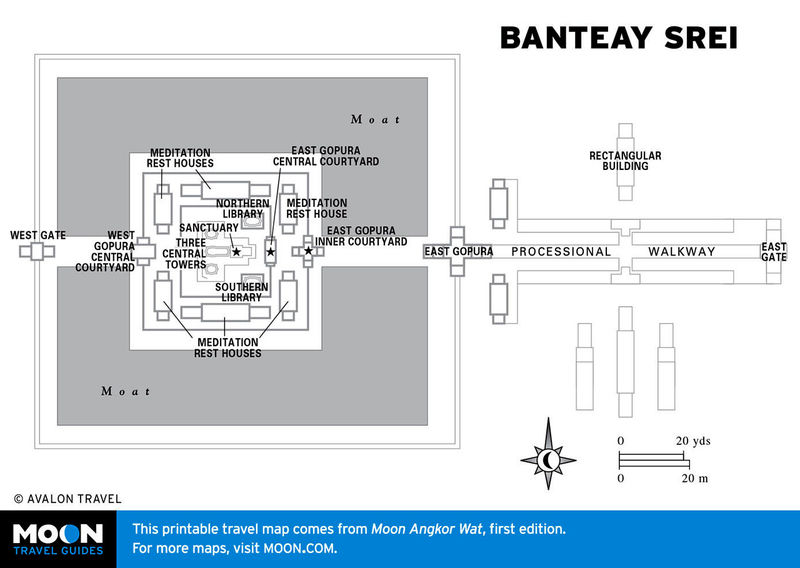 "Located at the foot of the Kulen Mountain, the remote temple complex of Banteay Srei, is ornamented with exquisitely detailed carvings. Executed in pink sandstone, the complex was built in the second half of the 10th century by Yajnavaraha, one of King Rajendravarman's counselors and the future guru of King layavarman V."
We spent a lot of time looking at the stories/myths on the many lintels. "The lintels above the doorways to the central sanctuary are embellished with scenes from the Ramayana. "Ramayana is an ancient Indian epic poem which narrates the struggle of the divine prince Rama to rescue his wife Sita from the demon king Ravana."
"The central shrines were dedicated to Shiva and Vishnu and are guarded by mythical figures with human bodies and animal heads. These are replicas: The originals have been stolen or removed for safekeeping."
Shiva and Parvati Riding the Sacred Bull Nandi. 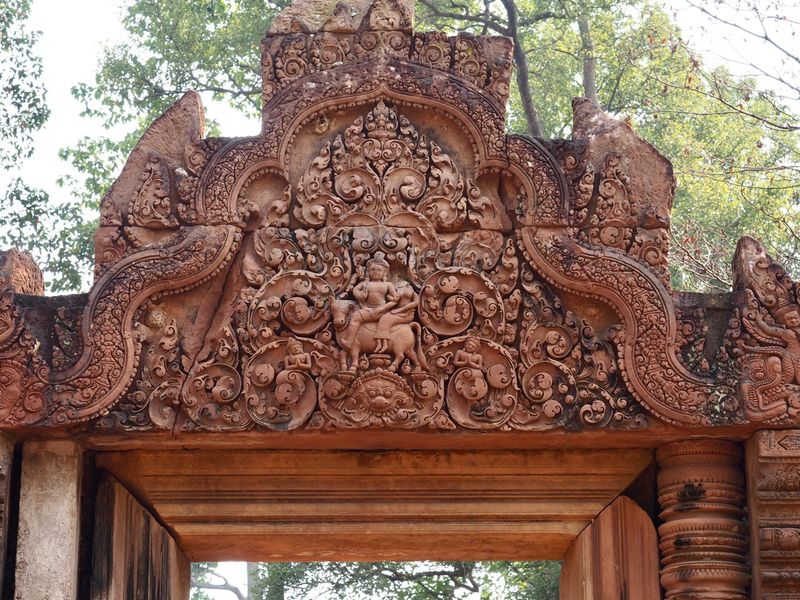 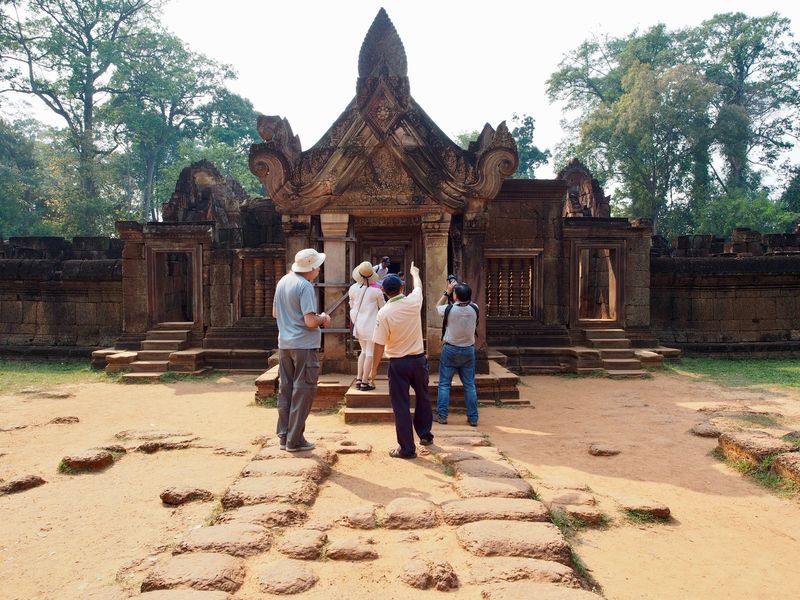 A closeup of the classic window design. 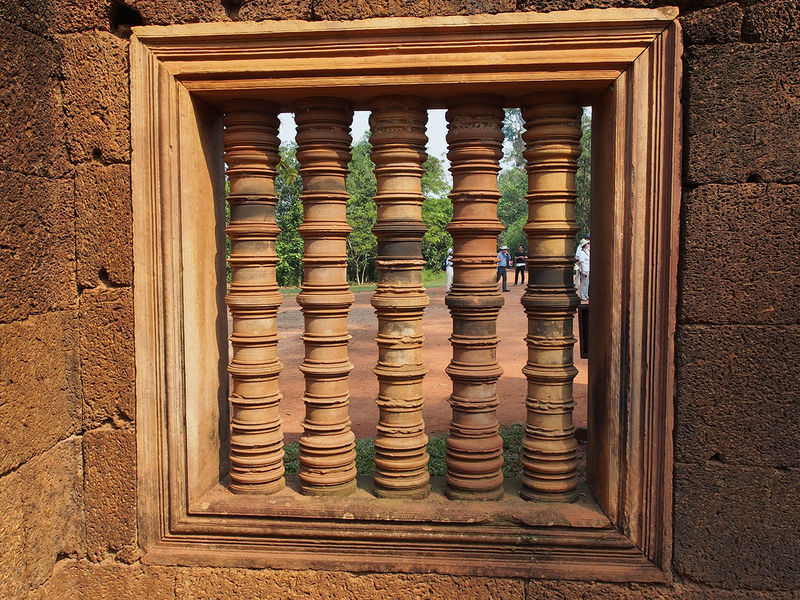 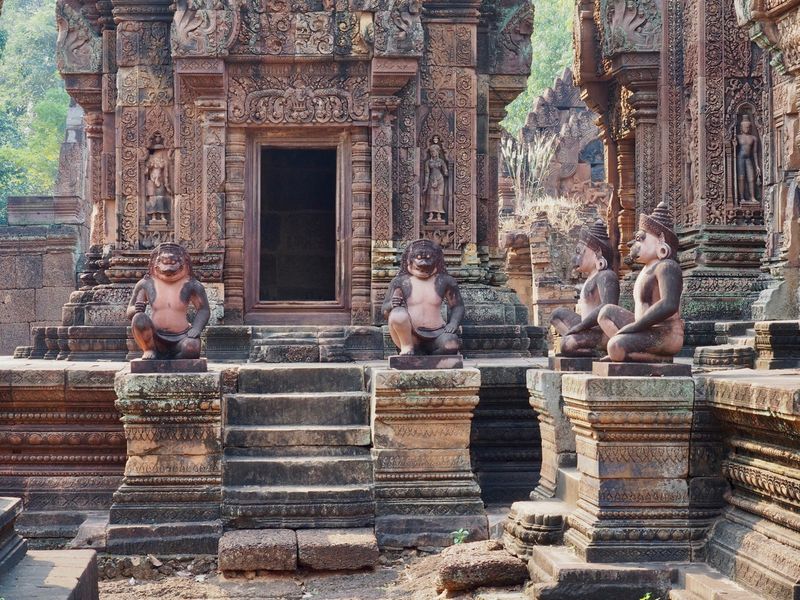 Lakshmi, Hindu goddess of wealth and wife of god Vishnu, is sprinkled with holy water. 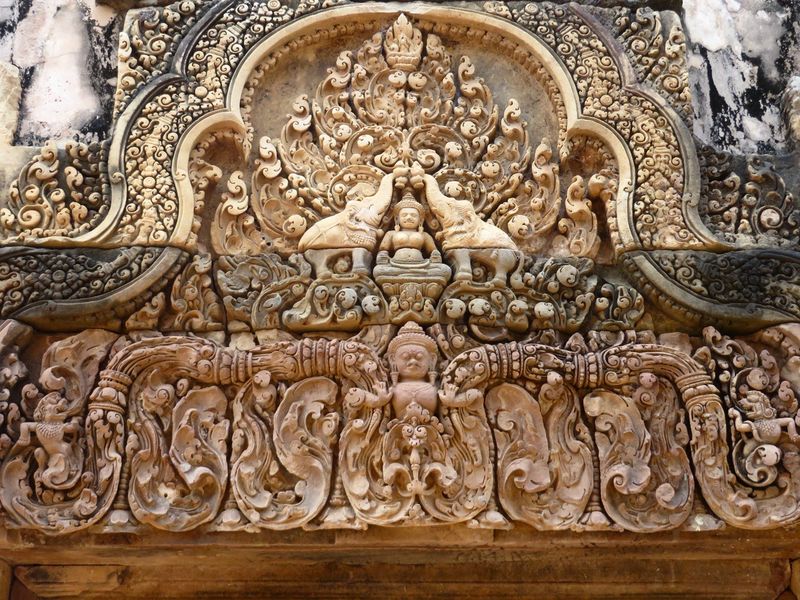 Ravana, king of the demons of Lanka, tries to shake Mount Kailash, home of Shiva and Parvati. Ravana has multiple heads to show the shaking. Shiva and Parvati are at the top of the carving. 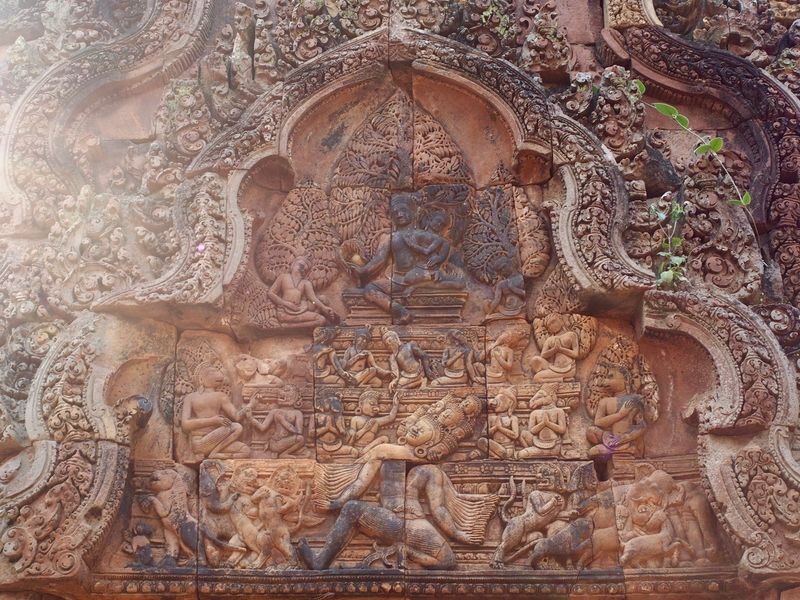 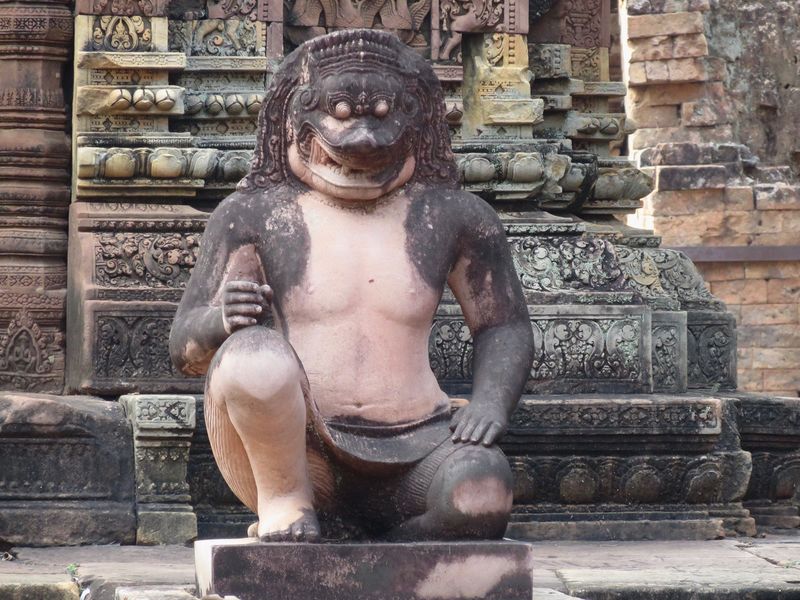 By the way, there are also fake doors (for the symmetry) in all these designs. 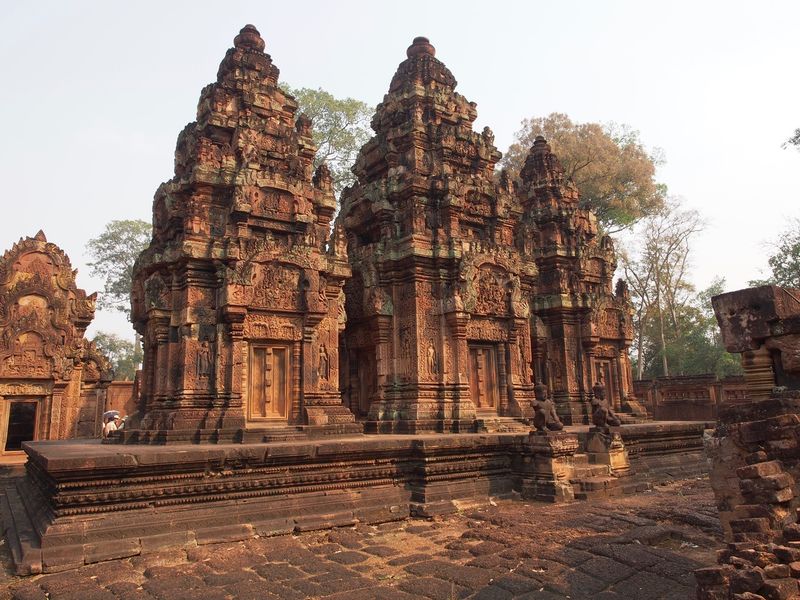 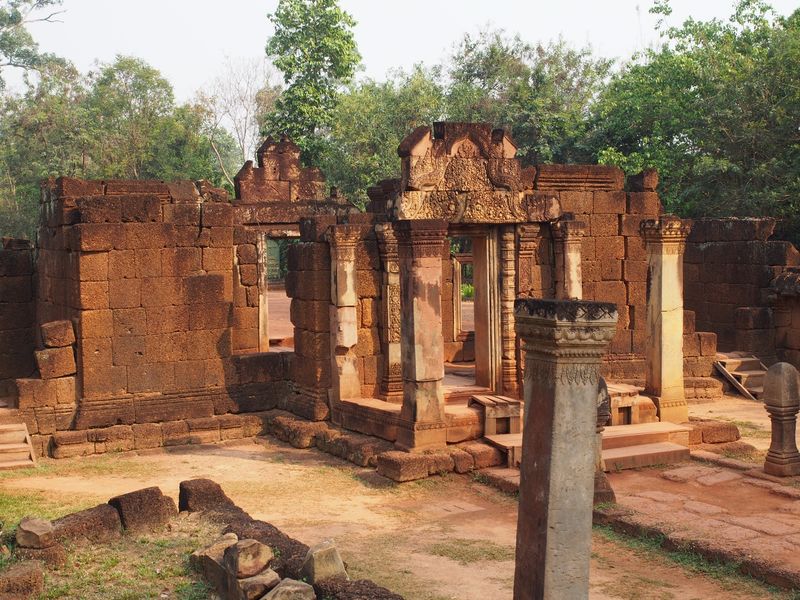 After a long day, we got back to the hotel.
That evening, we walked to the Old Market and the Art Market (we bought a painting). We then walked to bustling Pub Street, full of young tourists, and ate at Red Piano (Panang curry and Cambodian curry) and people-watched. 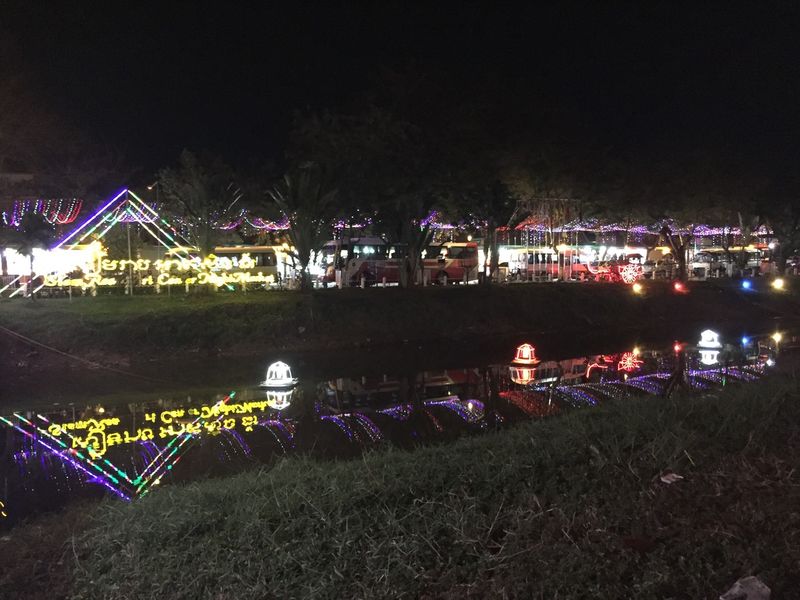 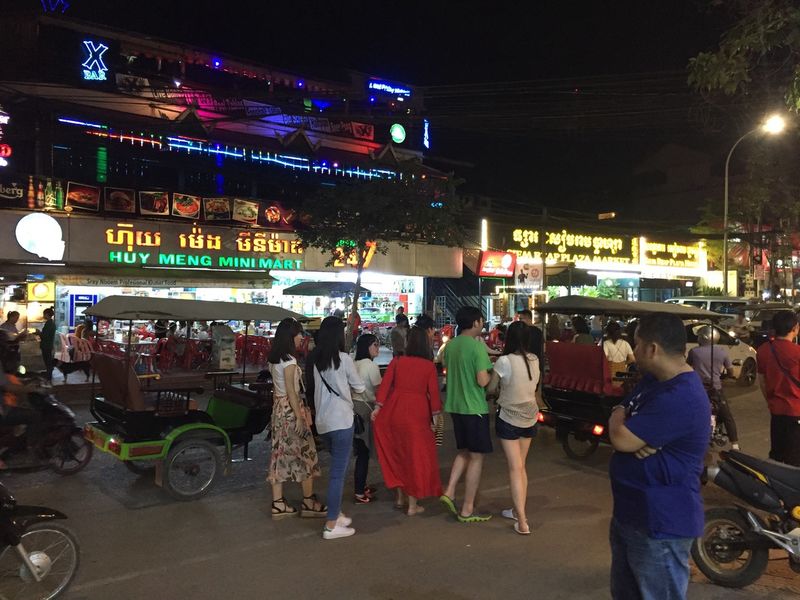 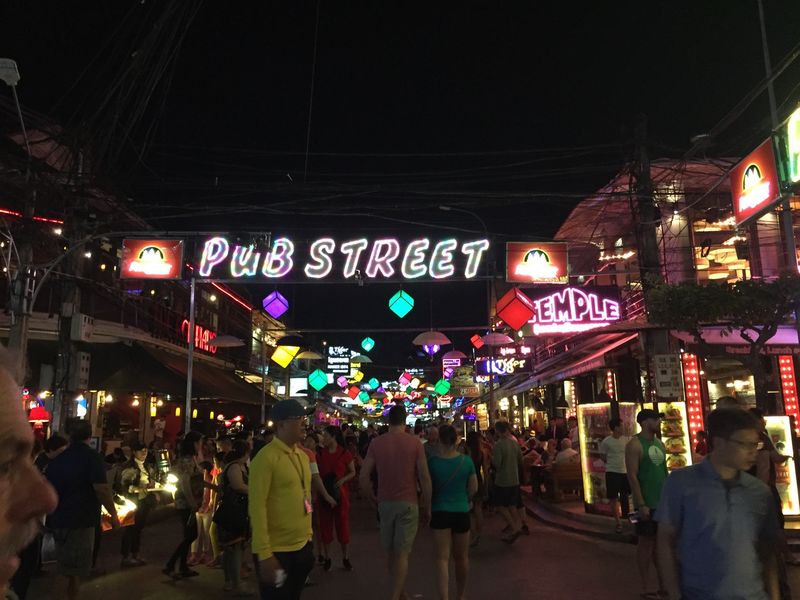 Published by Eileen and Larry Samberg on February 2nd, 2018