After sunrise and Angkor Wat and breakfast back at the hotel, we met Mony at 10 am and headed south to two of the three Roulos temples (near the town of Roulos) – Preah Ko and Bakong. These temples were much older than the main Angkor temples.
"Preah Ko, Sacred Bull, was built in the 9th century by Indravarman I. This temple was dedicated to the worship of Shiva. The main sanctuary consists of six brick towers resting on a raised laterite platform. Close by are three statues of the sacred bull Nandi. The motifs on the lintels, false doors, and columns are also well preserved." 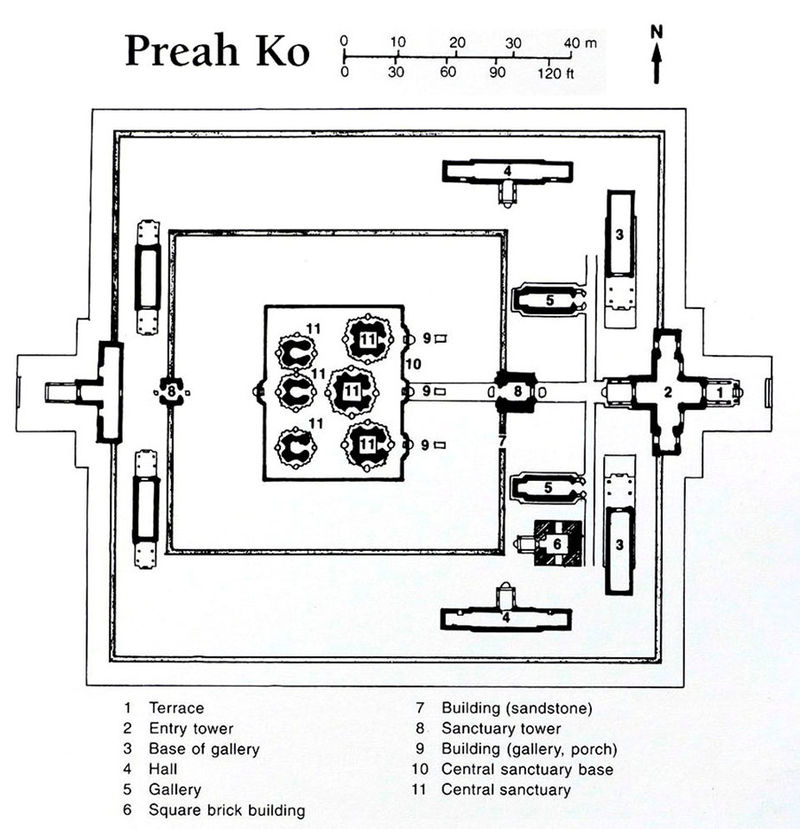 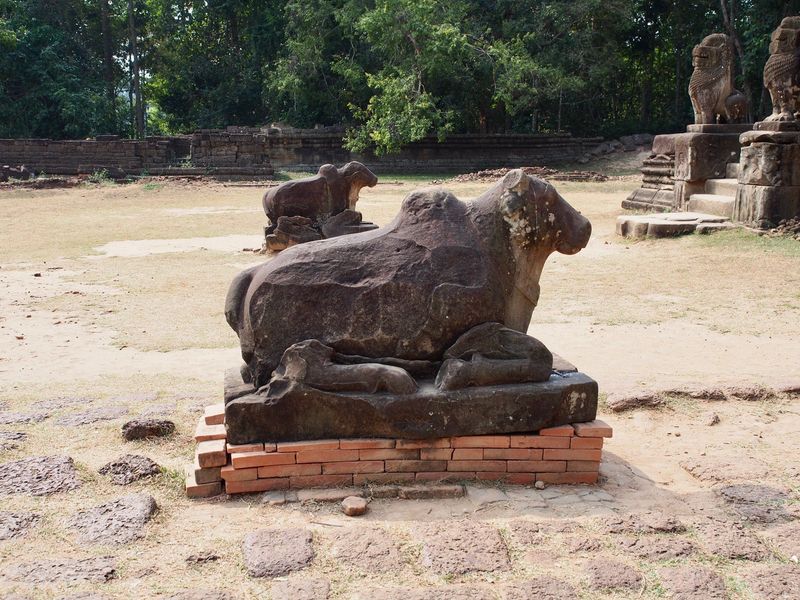 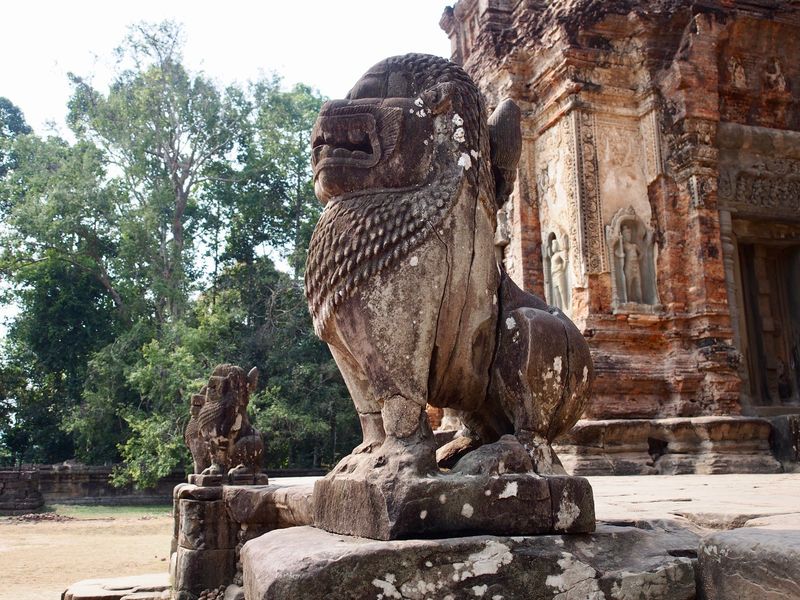 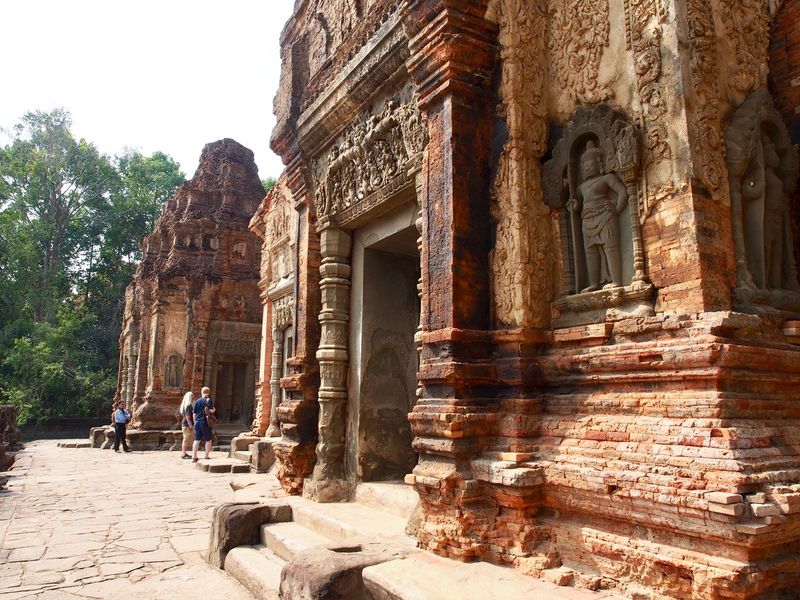 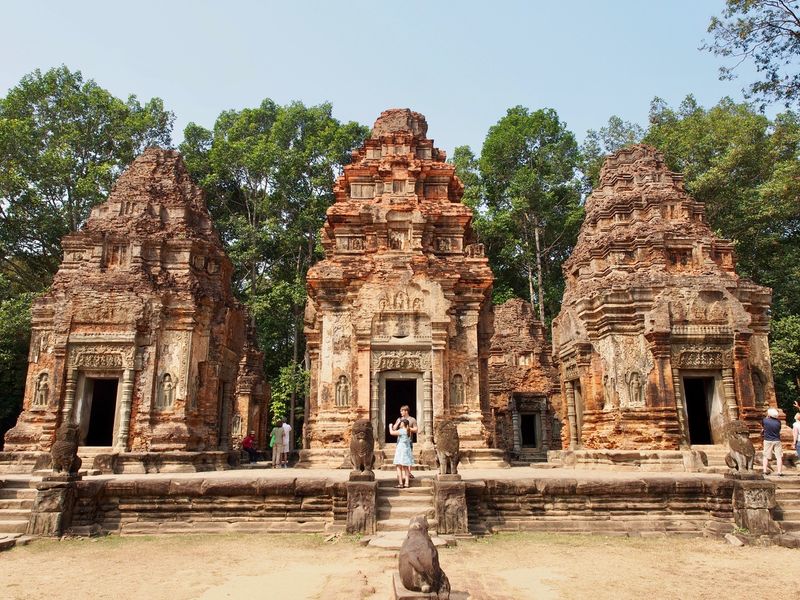 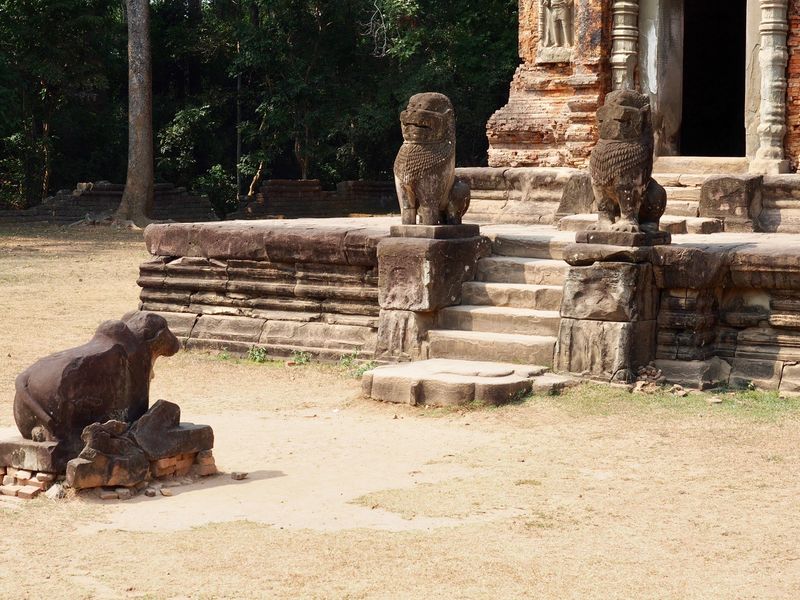 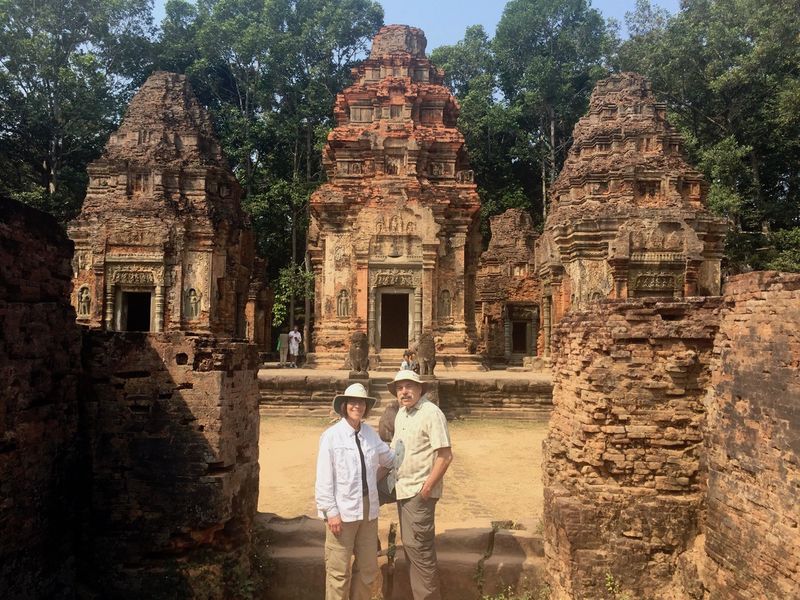 Our next stop was nearby Bakong.
"The huge mass of Bakong is by far the largest of the Roluos Group. Originally dedicated to Shiva in AD 881, the temple has since become a place of worship for Buddhists. More than 100 years ago, it was the central feature of Hariharalaya, as a temple-mountain representing Mount Meru, the mythical abode of the gods. Approached by a pathway that is protected by a seven-headed naga, and flanked by guesthouses for pilgrims, the mount rises in four stages, the first three of which are flanked by stone elephants at the corners. At the summit rests the square central sanctuary, with four levels and a lotus-shaped tower rising from the middle. The mount is surrounded by eight massive brick towers that feature finely carved sandstone decorations." 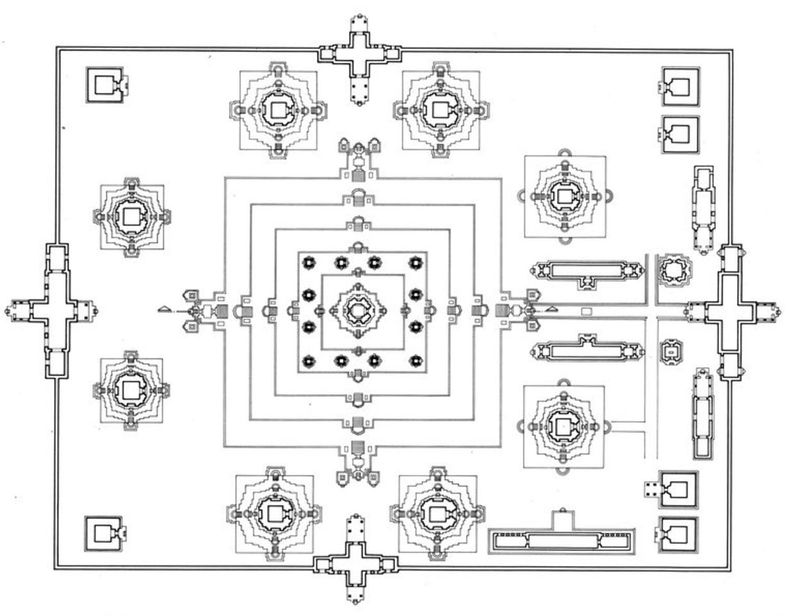 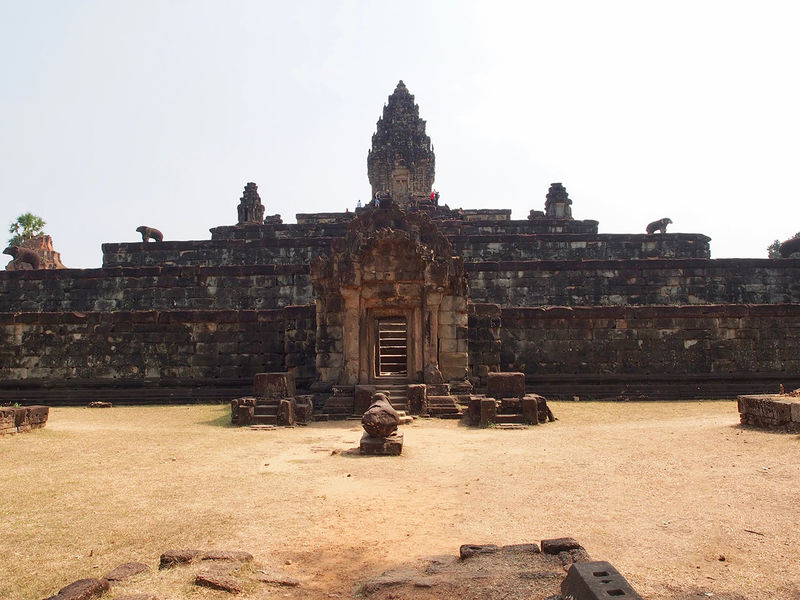 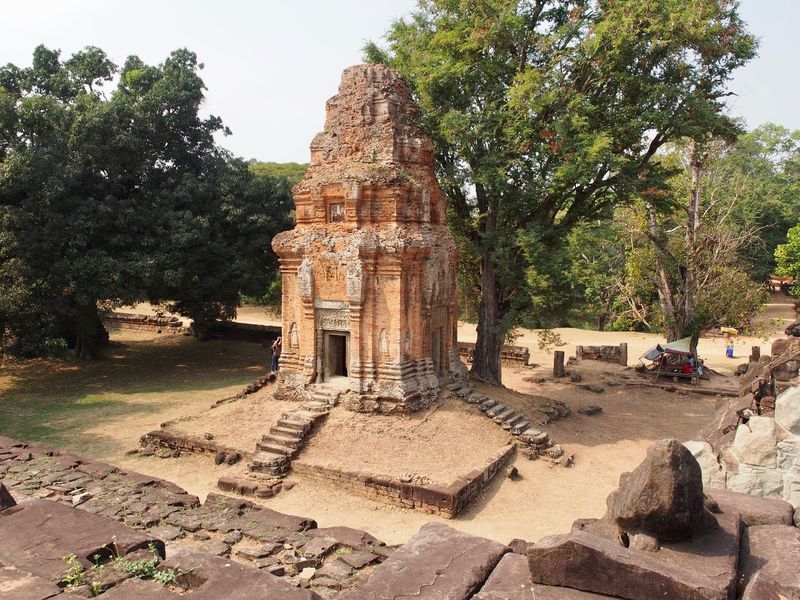 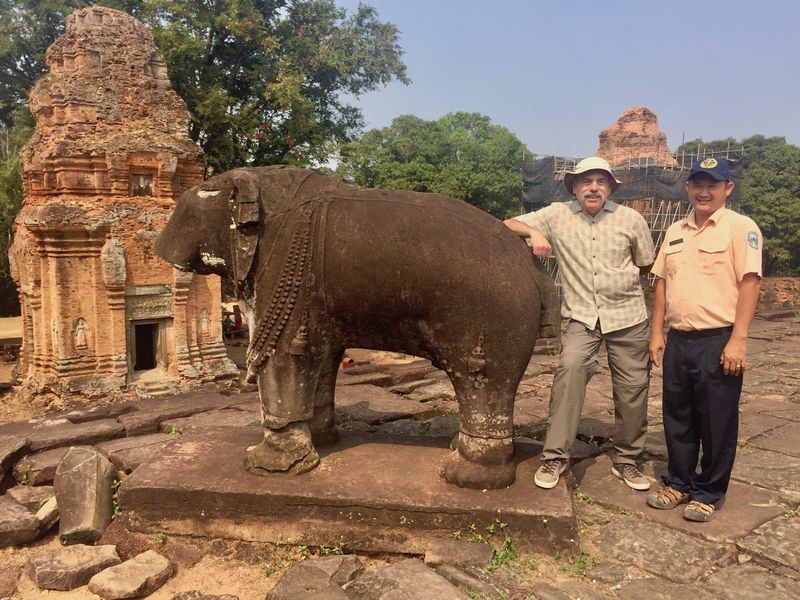 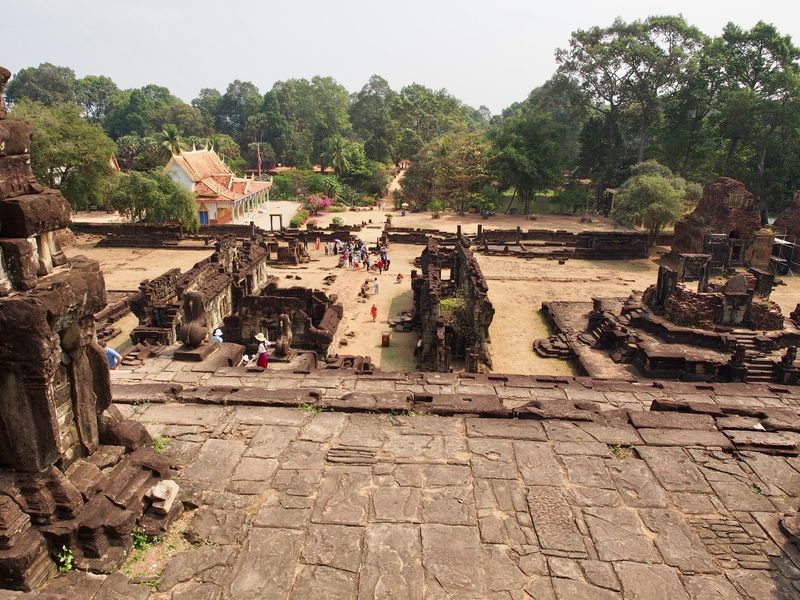 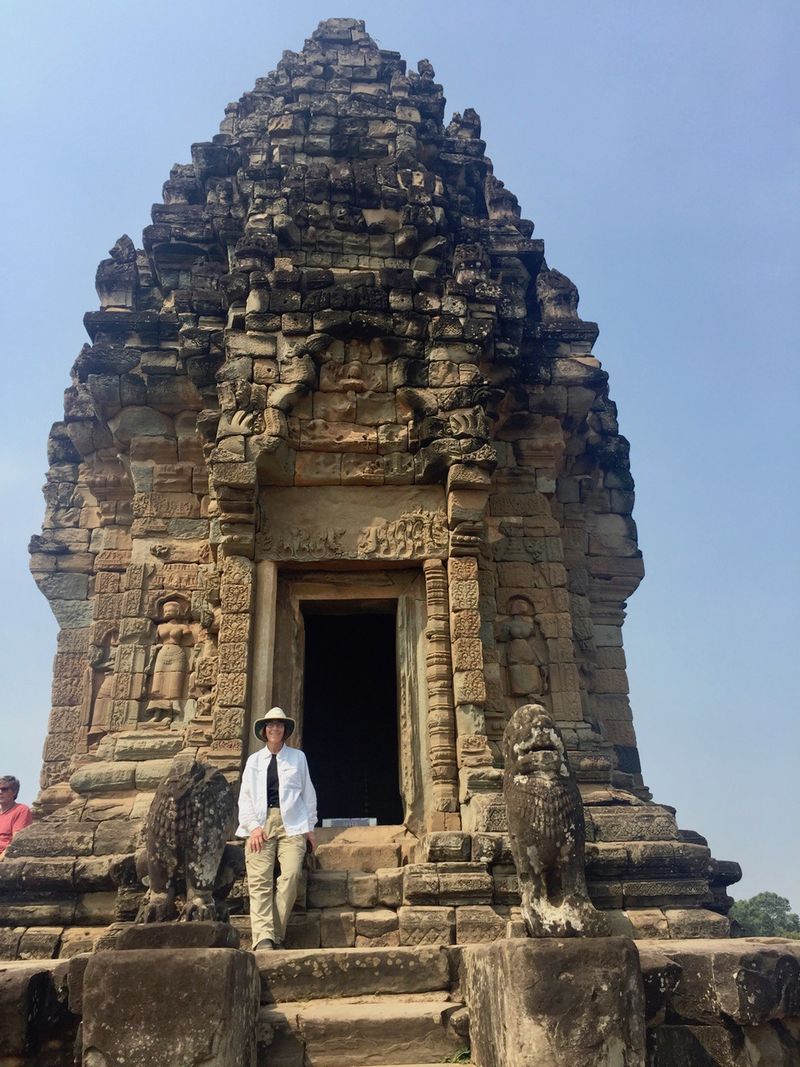 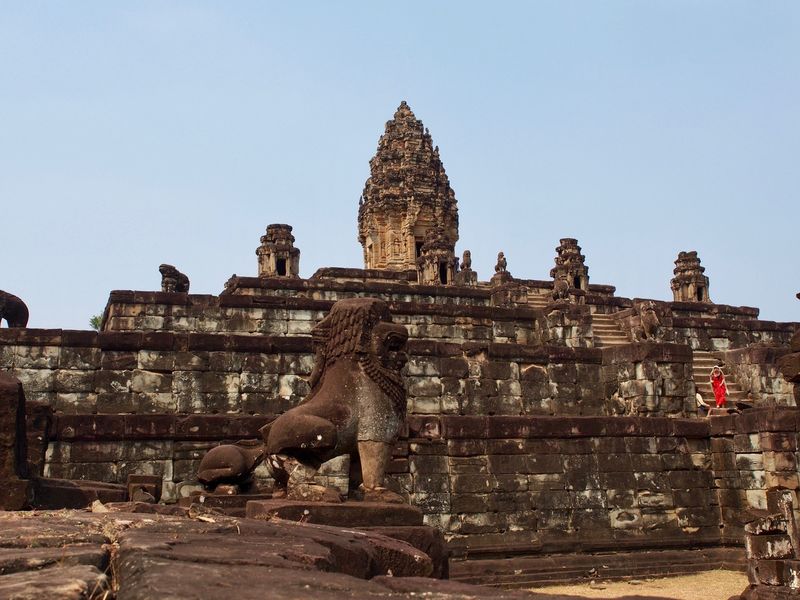 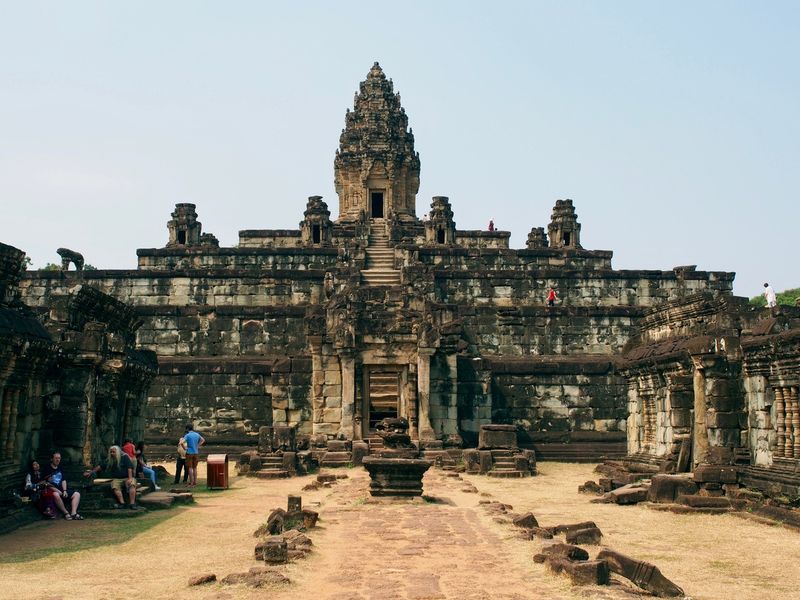 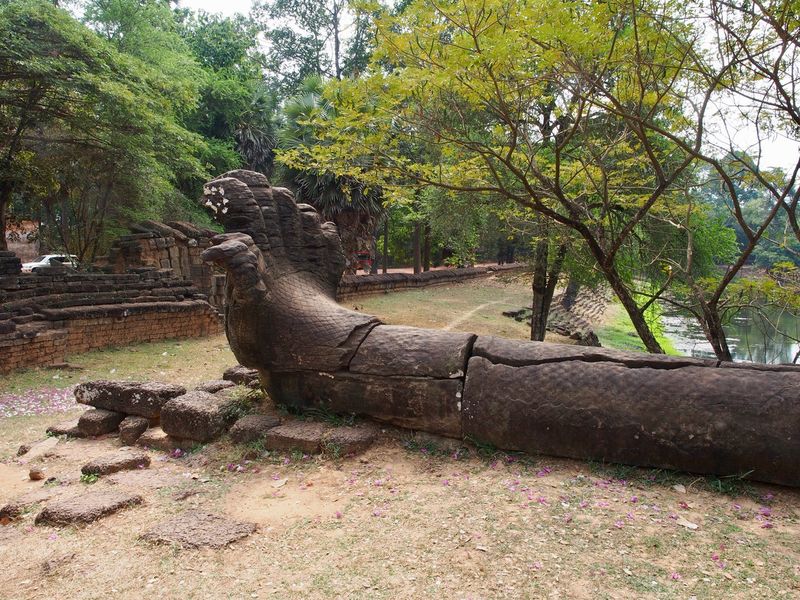 Yet another stop – Tonlé Sap Lake. "Tonlé Sap refers to a seasonally-inundated freshwater lake, the Tonlé Sap Lake and an attached river, the 120 km (75 mi) long Tonlé Sap River, that connects the lake to the Mekong River." We took a boat ride along a canal and walked around Kompong Phluk, a floating village, high on stilts during the dry season, flooded during rainy season, and where the people live off fishing and shrimp harvesting. We headed out to the lake for a bit, and then back to our start. 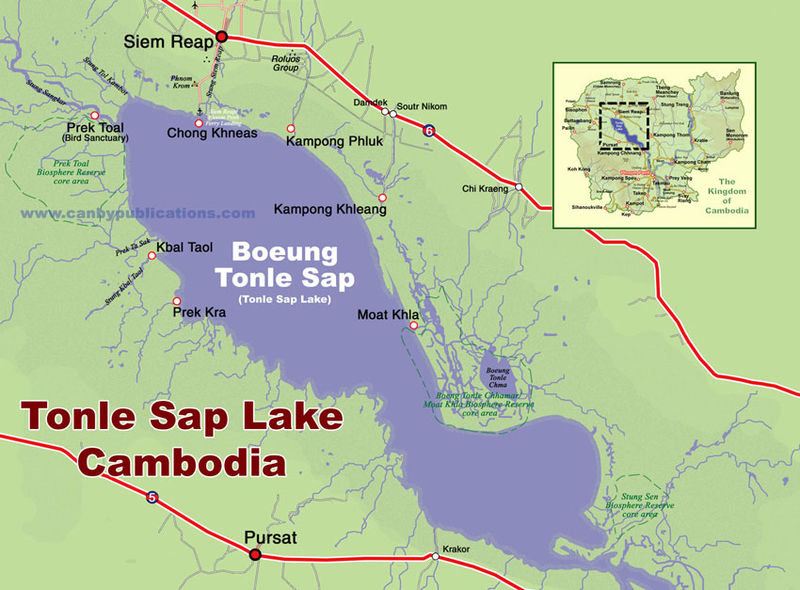 Heading out to the lake, houses on stilts. 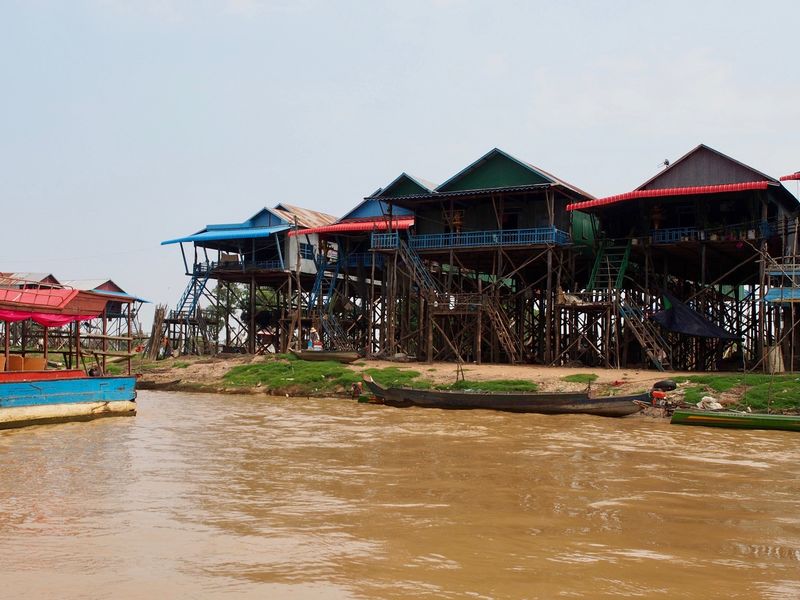 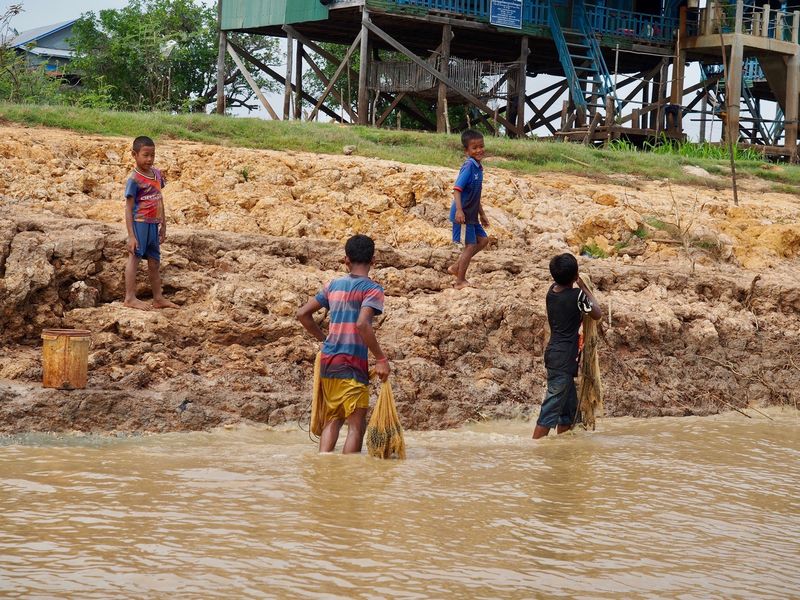 We pulled over and walked in the village. These houses are actually pretty typical Cambodian style — houses on stilts with storage underneath for animals and the like. 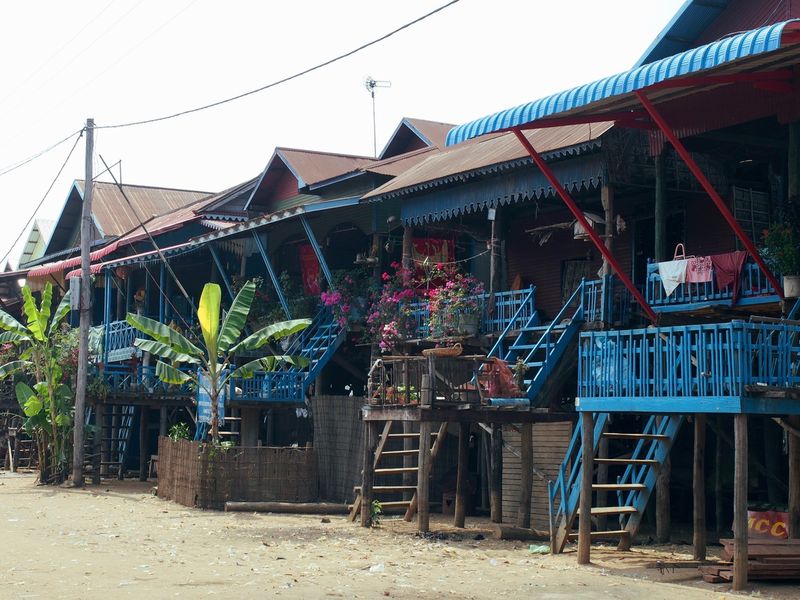 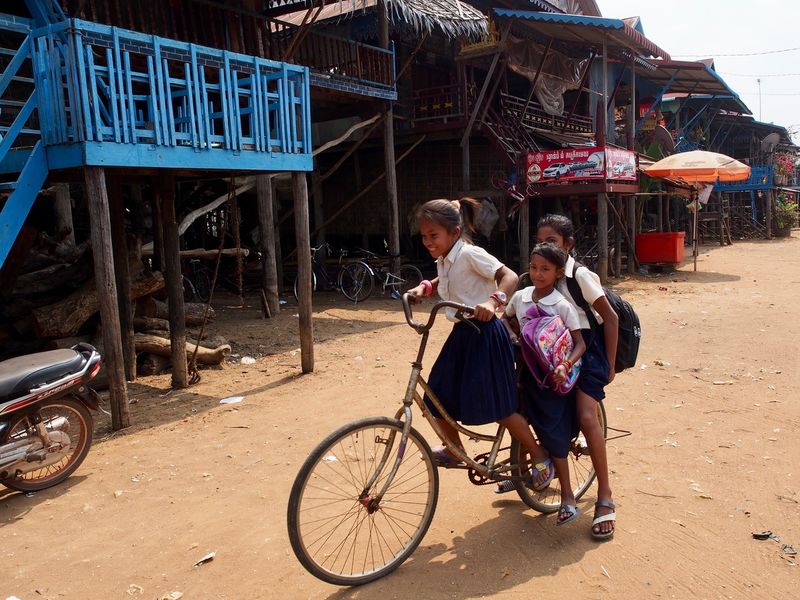 Walking the plank back out to our boat. 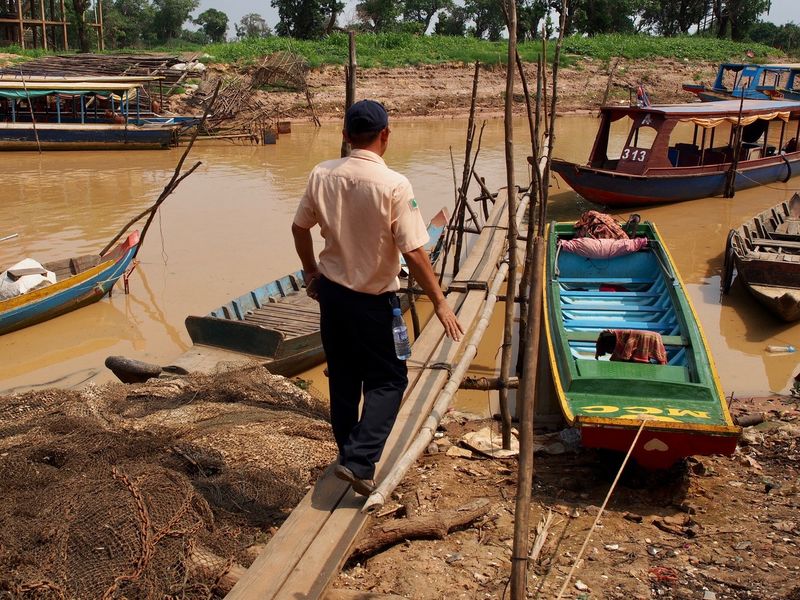 The “flooded forest" as it is called on the map. 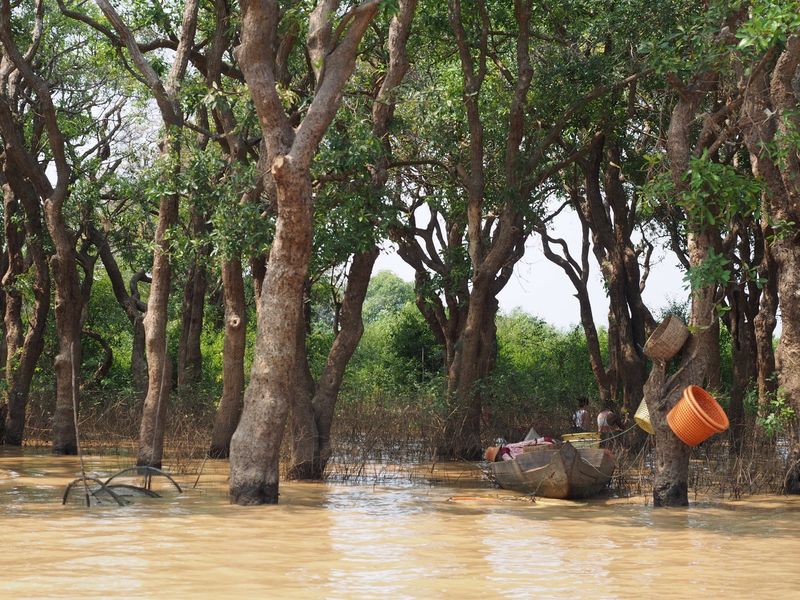 On the lake, there are floating restaurants and gift shops for the tourists. 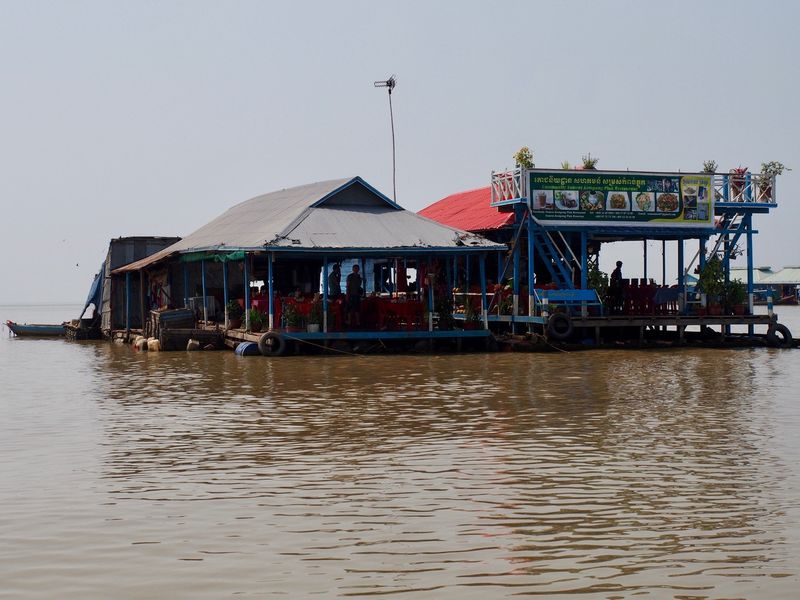 Driving back for lunch, I took a picture of a typical Cambodian house — on stilts, with room for storage and animals below, and according to Mony, for married daughter and son-in-law when they first get married. 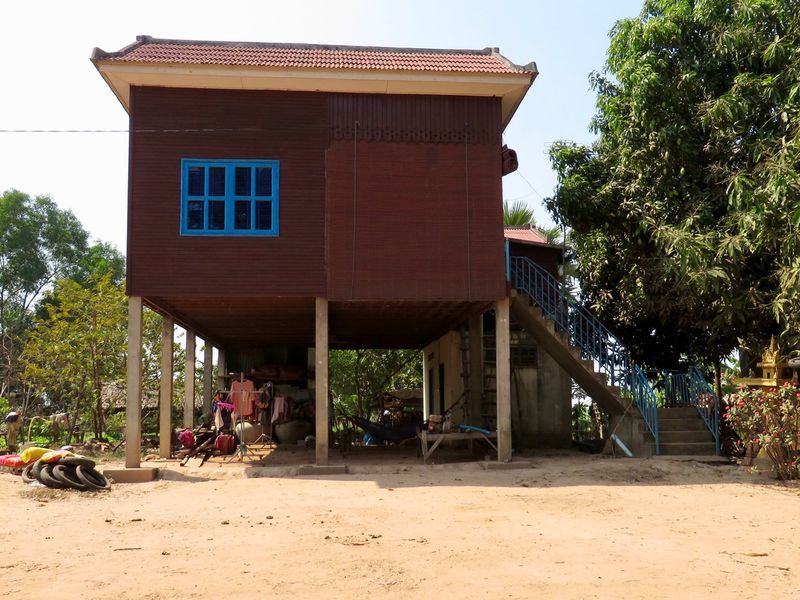 We had lunch at Stoeng Trorcheak, another restaurant catering to tourists but with local-style food. 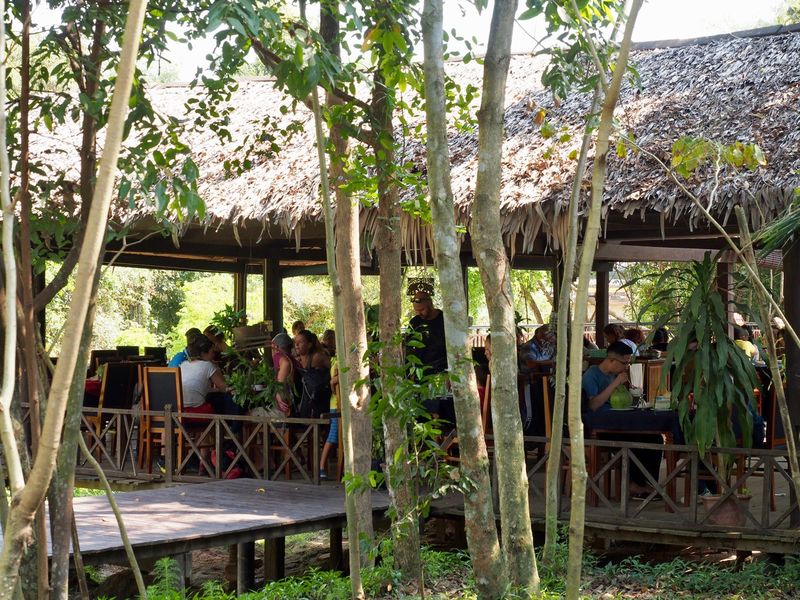 Then we headed back to the hotel.
Route 6 (the main road) before crossing the river and heading to our hotel. 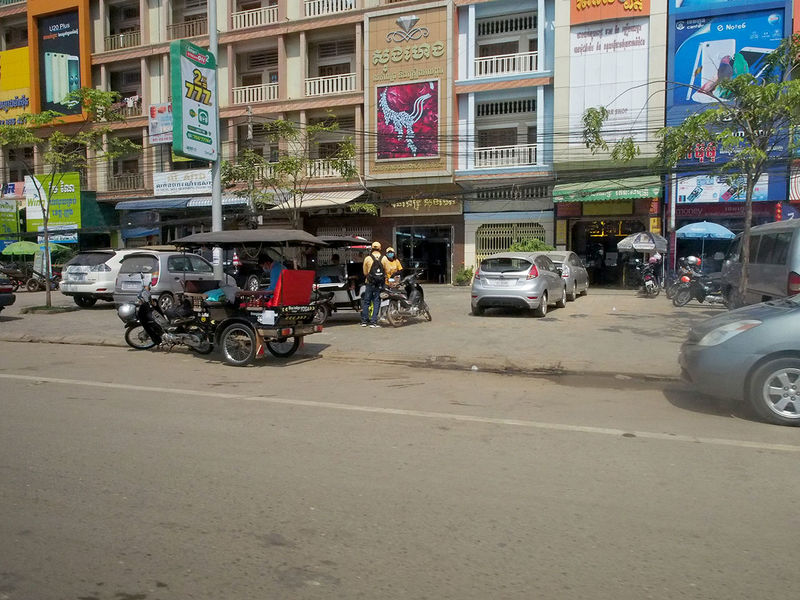 We got back around 4. But the day was not over yet. We were picked up at 5:30 to go to a quality silk and silver store that Mony liked, and bought some dress scarves as gifts.
Finally, we got dropped off for buffet dinner and traditional dances at the very touristy and very large Koulen Restaurant at 6:30 pm. We were not crazy about going as we had seen bad reviews of this overly touristy place, but Mony said the apsara-inspired dancing was decent and worthwhile to see. The buffet was marginal, and the hot foods were not in chafing dishes, so were luke-warm to cold. However, the hour-long show had traditional and apsara-inspired dancing by some young earnest women and men — we did enjoy it. Then we walked back to the hotel after a very long day.
Stoeng Trorcheak – ignore that it’s labelled Canadian on the page 😃
SK Hand Made Silver and Silk
Link to Day 4

Published by Eileen and Larry Samberg on February 3rd, 2018