After breakfast and Larry off to work, Eileen headed to the National Archeological Museum on Bus #3 and spent over 3 hours there, with two breaks in the beautiful open air cafe in the center.
The Cyclades are an island group in the Aegean Sea, southeast of mainland Greece. The significant Late Neolithic and Early Bronze Age Cycladic culture is best known for its schematic, flat idols carved out of the islands' pure white marble centuries before the great Middle Bronze Age Minoan civilization arose in Crete to the south.
Cycladic statue 2800-2300 BCE. 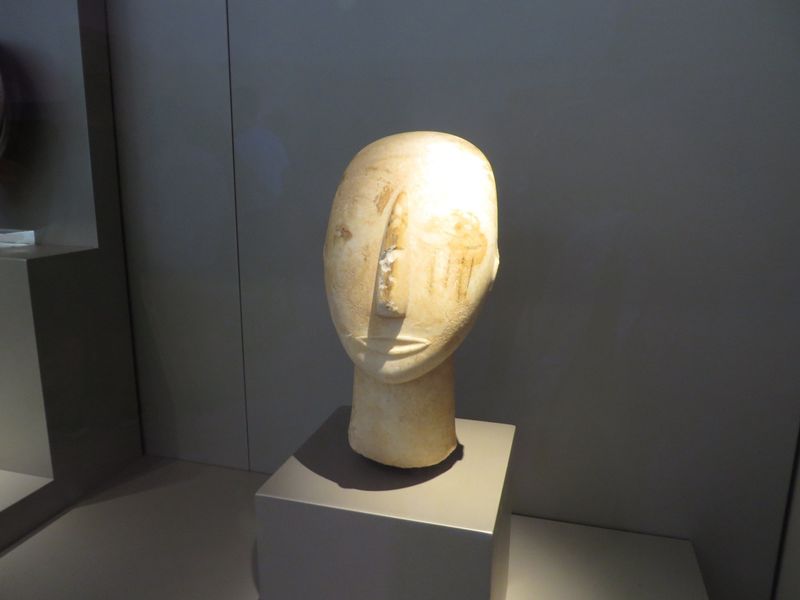 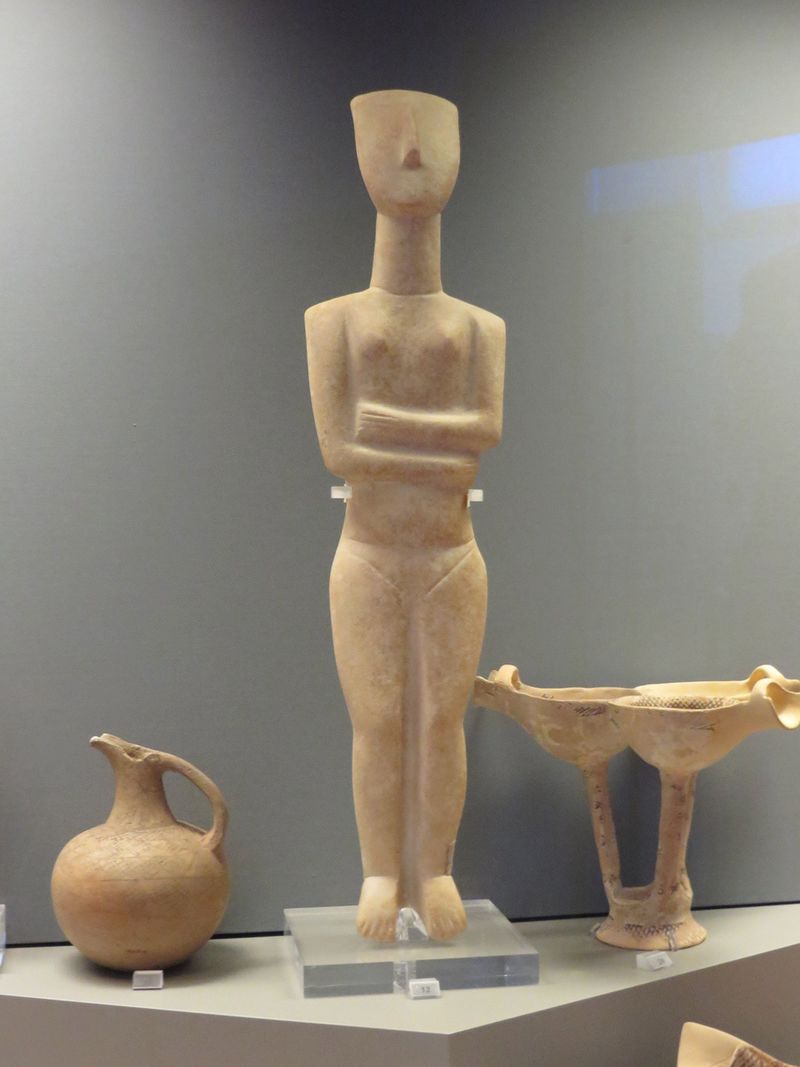 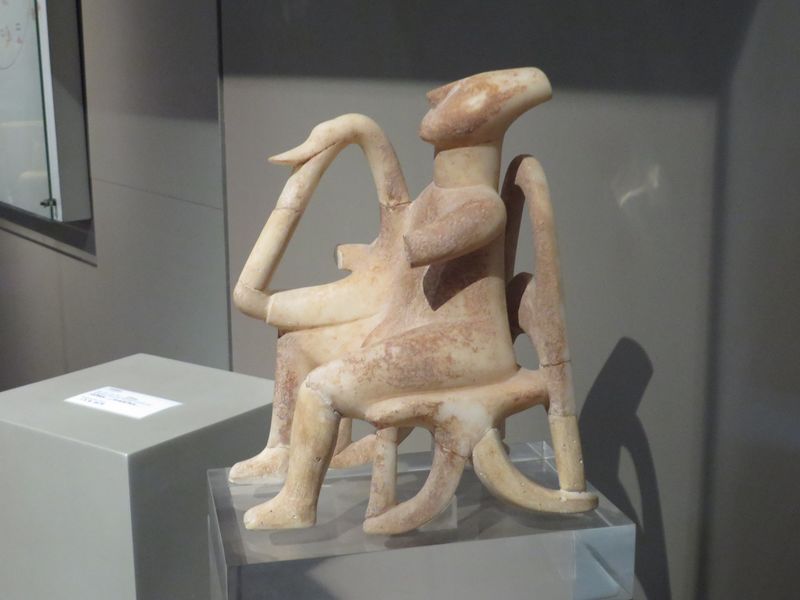 The next populations were the Minoans, of which little is known, and the Mycenaeans. The Mycenaeans controlled Southern Greece 1600–1200 BCE.
One of the most famous pieces in the collection is the gold Mycenaean (funeral) Mask Of Agamemnon. The only problem is that the mask has been dated to 1550 BCE and the battle of Troy (when the Greeks led by Agamemnon defeated the Trojans) was about 1300 BCE. 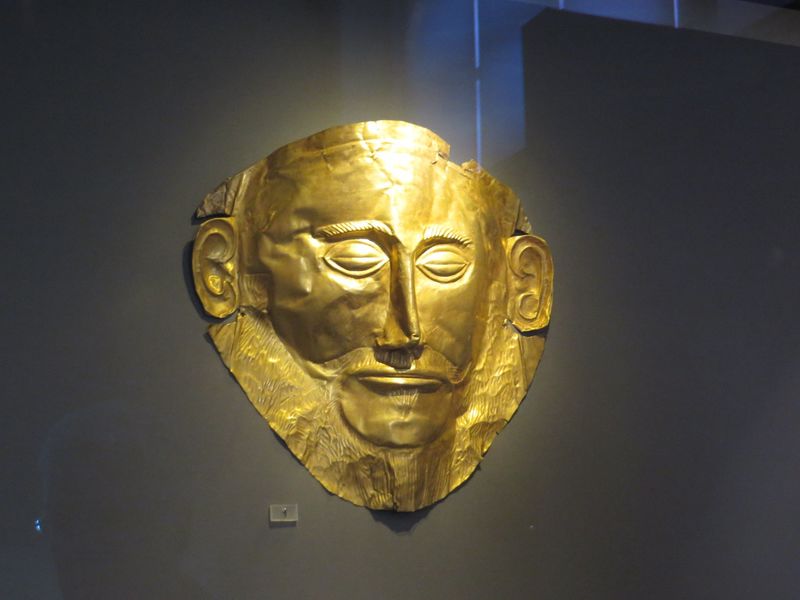 Frescoes from the Royal Palace, done in the Minoan style. (The peaceful Minoans society collapsed at some point and Minoans survived by being the artisans for the Mycenaeans.) 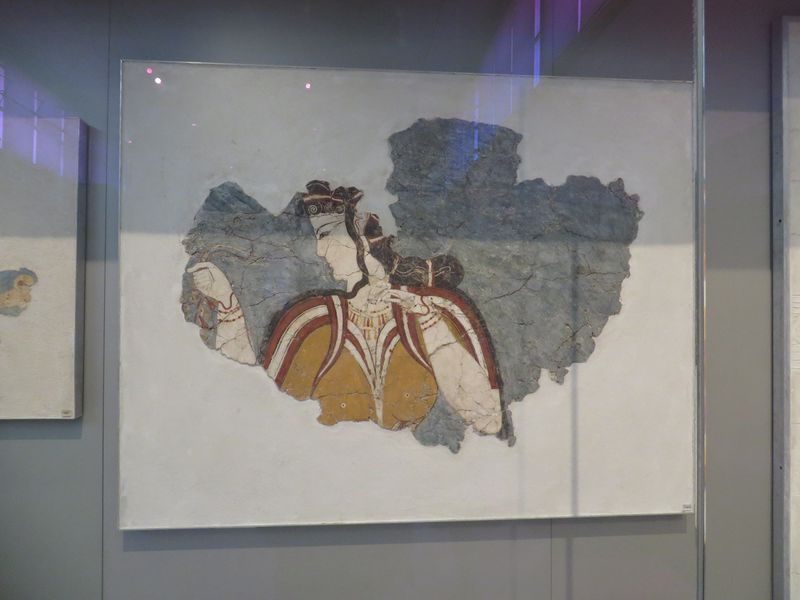 The Mycenaean Warrior Vase, dated to the 13th century BCE 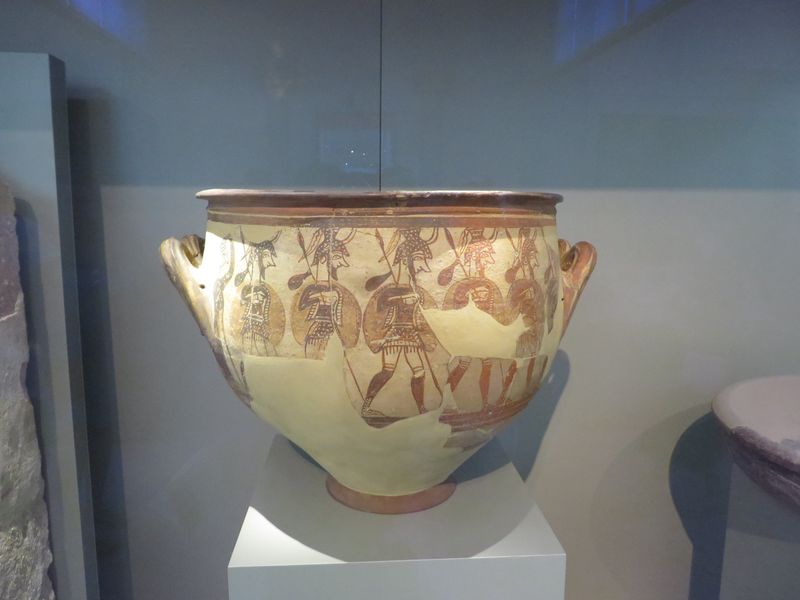 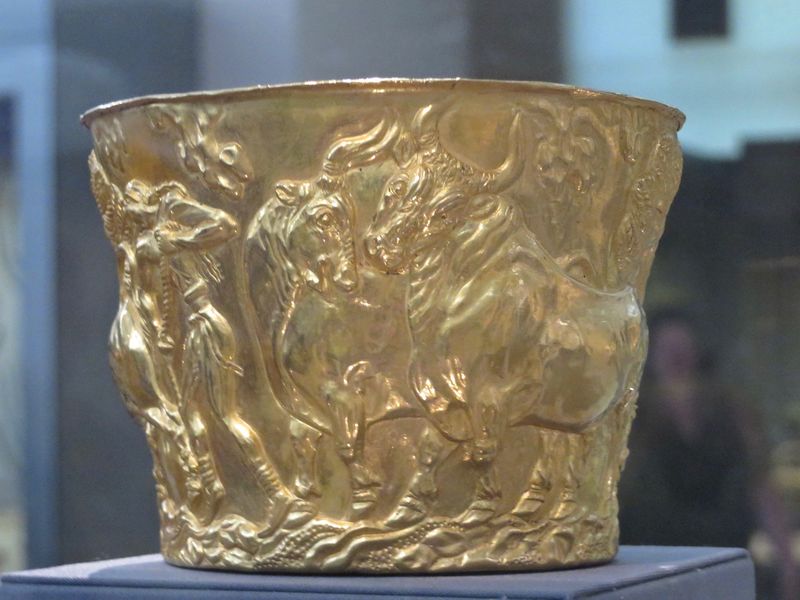 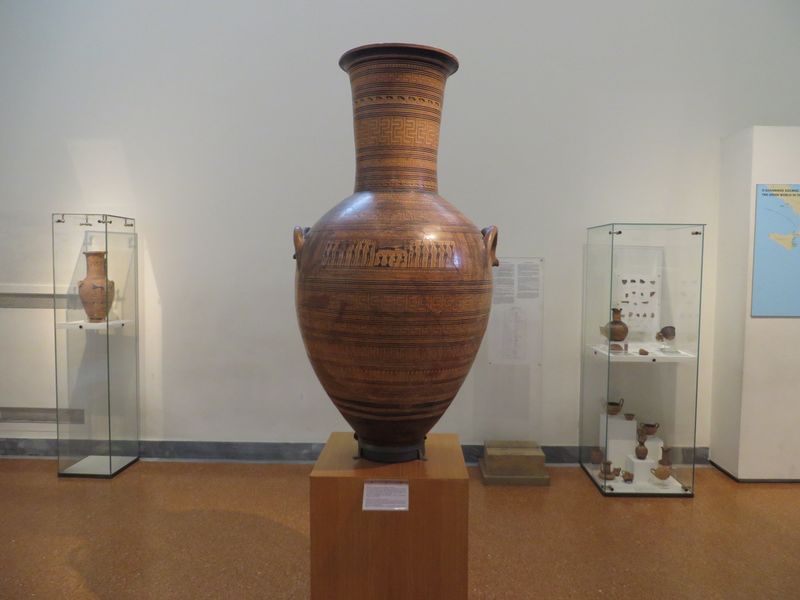 Some of the earliest examples of post-Mycenaean art are these statues of women (Kore) and men (Kouros). This one is from 650 BCE. 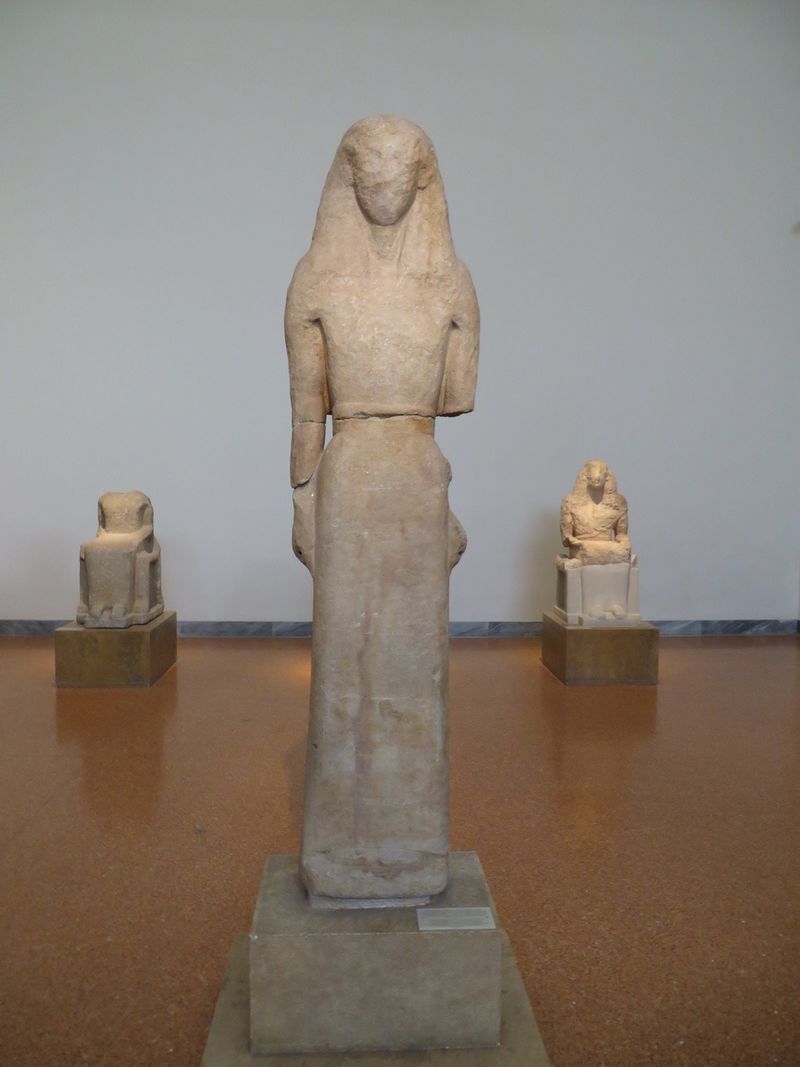 A Kore from about 550 BCE with “Archaic smile"

A Kouros from around 500 BCE with “Archaic" smile 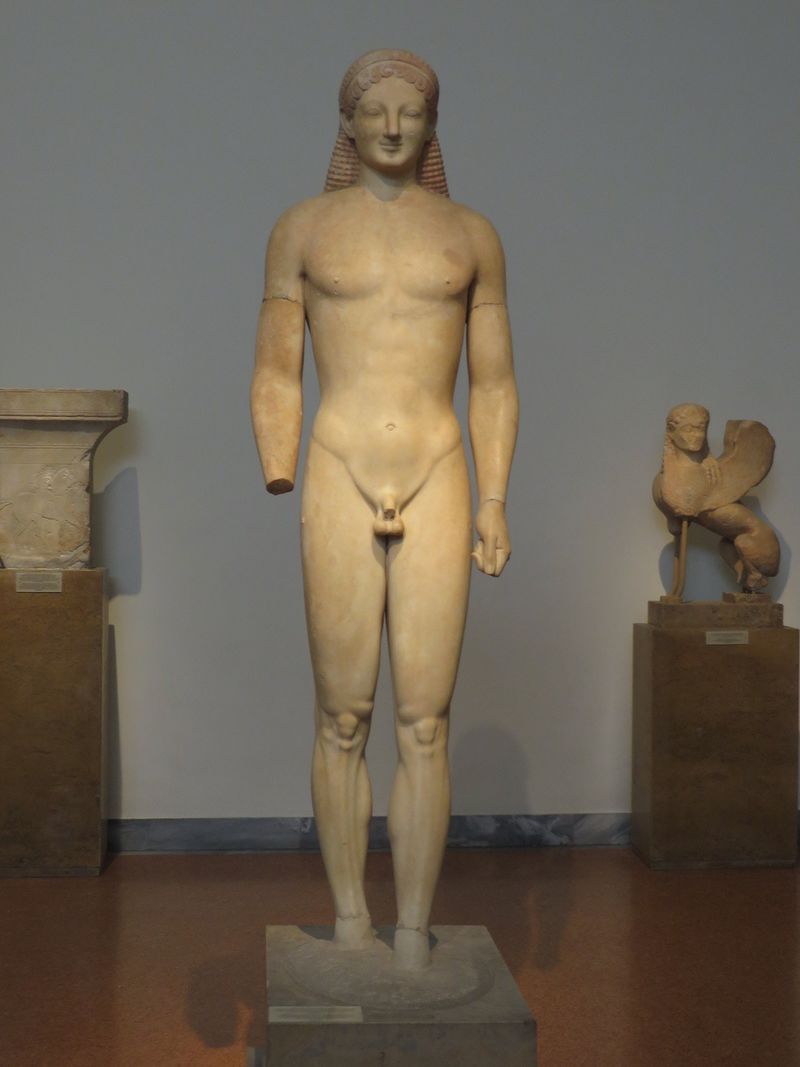 Next important figure is a big leap into the Servere (non-smiling) style, around 460 BCE, with a study in Greek attention to perfection. This is either a statue of Poseidon or Zeus. Since the object he was holding is missing, you can only guess. 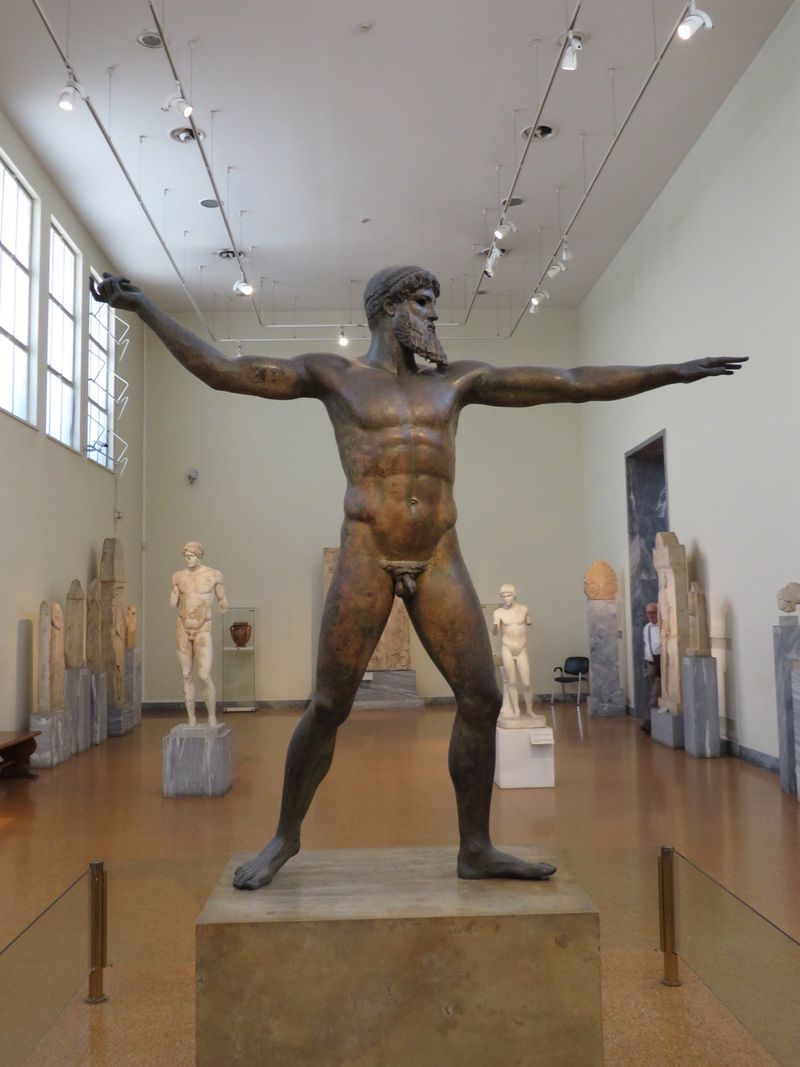 Scale model of Athena, called the Athena Varvakeion. This is the famous copy of the most famous statue of Golden Age Athens – the 40-foot status of Athena that once stood in Parthenon. The large statue dates to about 438 BC. This copy, 1/12 the size, was sculpted around 250 CE, before the original was lost to history. 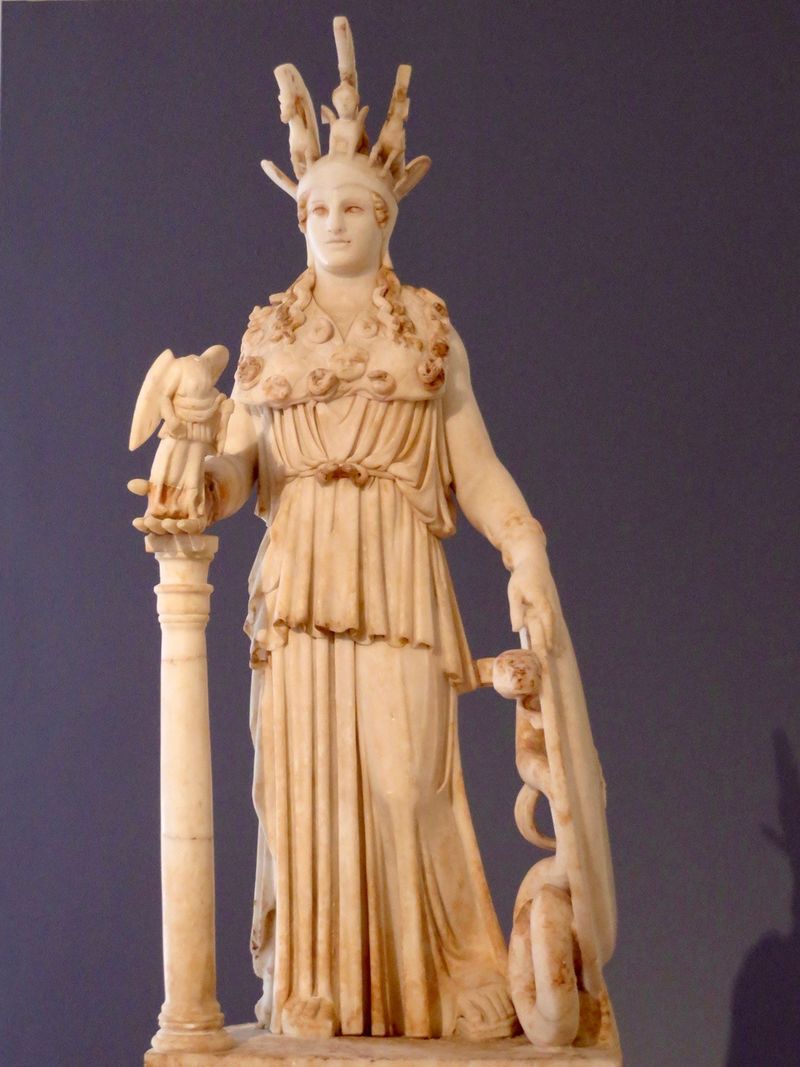 This bronze, the Artemision Jockey, is from about 140 BCE, and uses the “lost wax" technique, with a mold rather than hammered metal. The jockey is thought to be an Ethiopian boy. 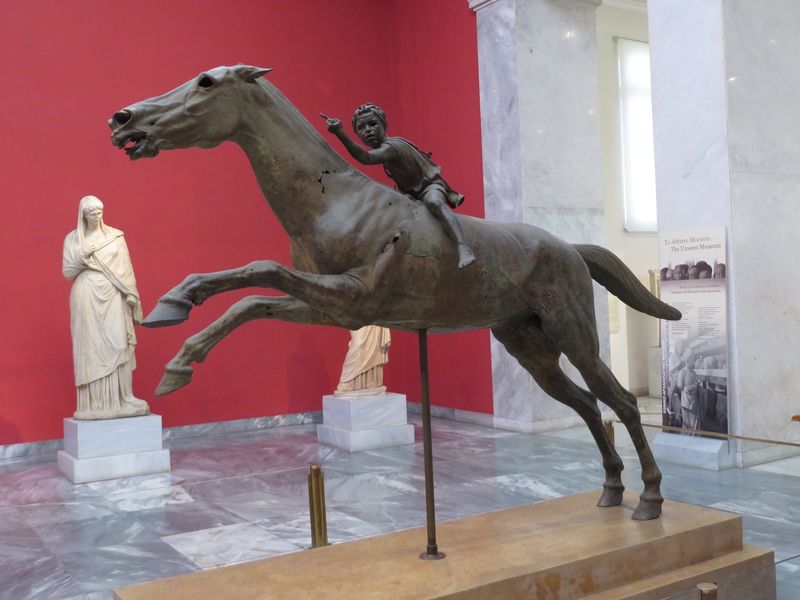 This Bronze Statue of a Youth, is thought to be Paris, the mythical prince of Troy. It is dated the Classical period around 340 BCE. 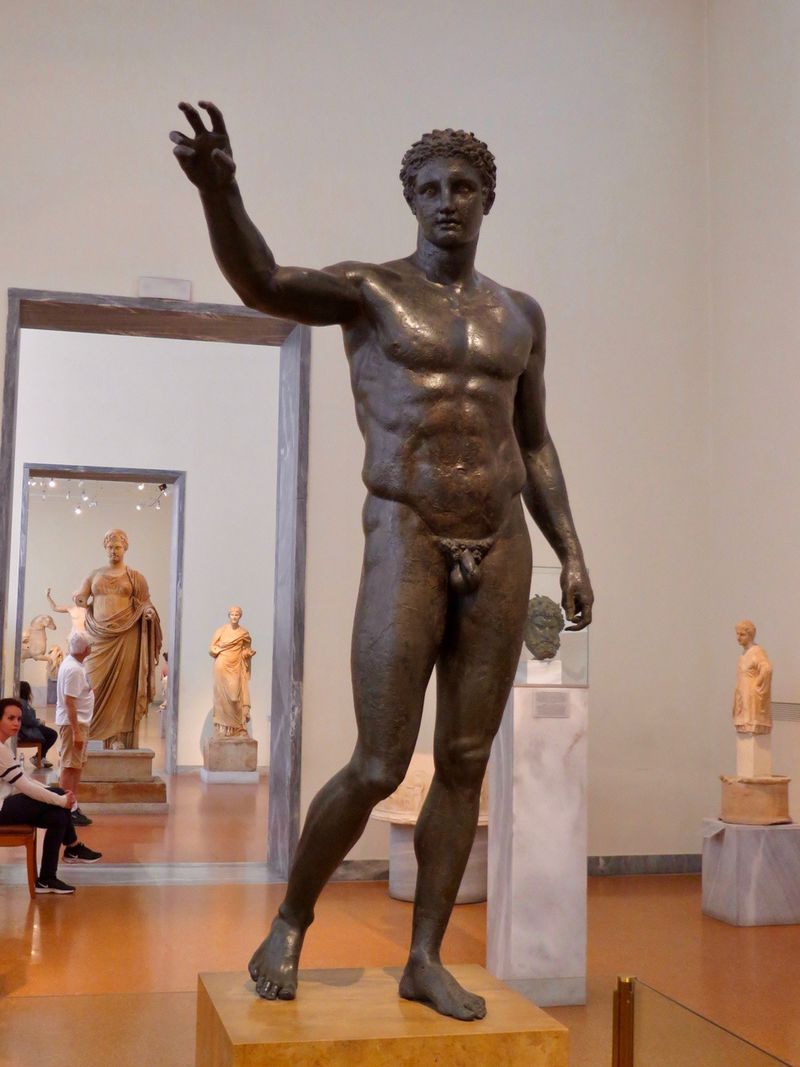 Portrait Head from a Statue of a Philosopher. He is a cynic, a movement founded by Diogenes in the 4th century BCE. This is in Hellenistic (more realism rather than ideal) style after Alexander the Great conquered Greece, 240 BCE. 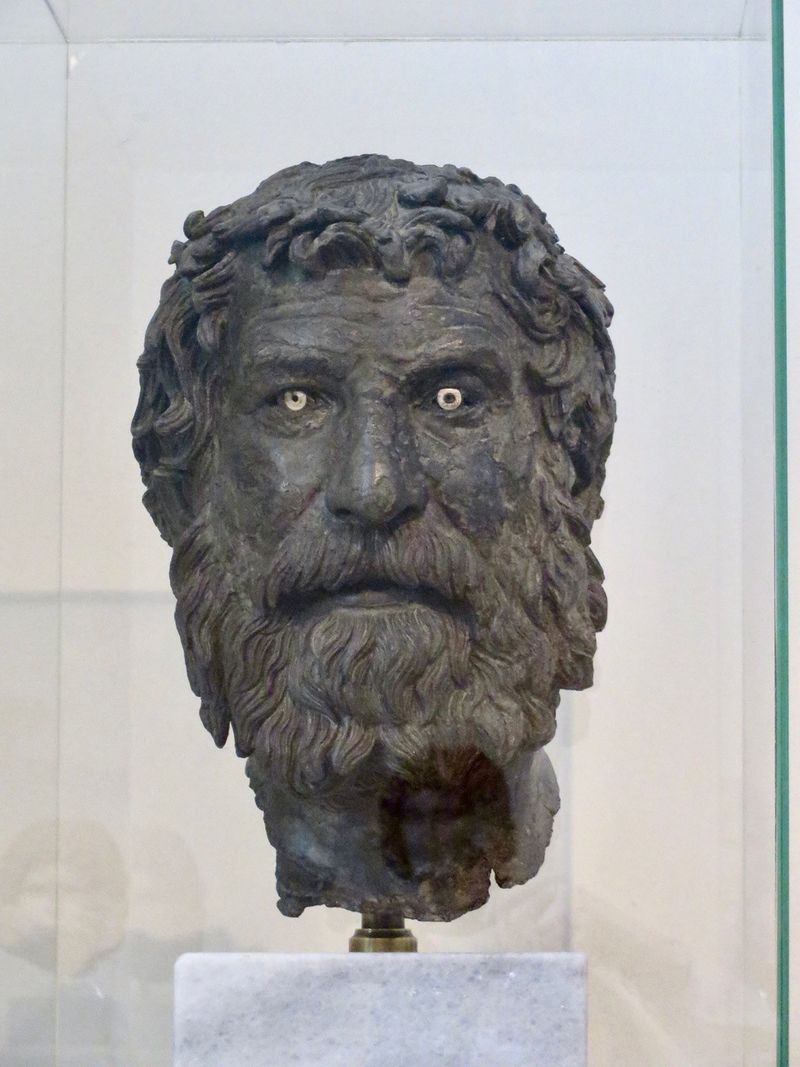 This is the Statue of Aphrodite, Pan, and Eros, dated around 100 BCE. Aphrodite is being harassed by Pan. Aphrodite raises her sandal to hit him. 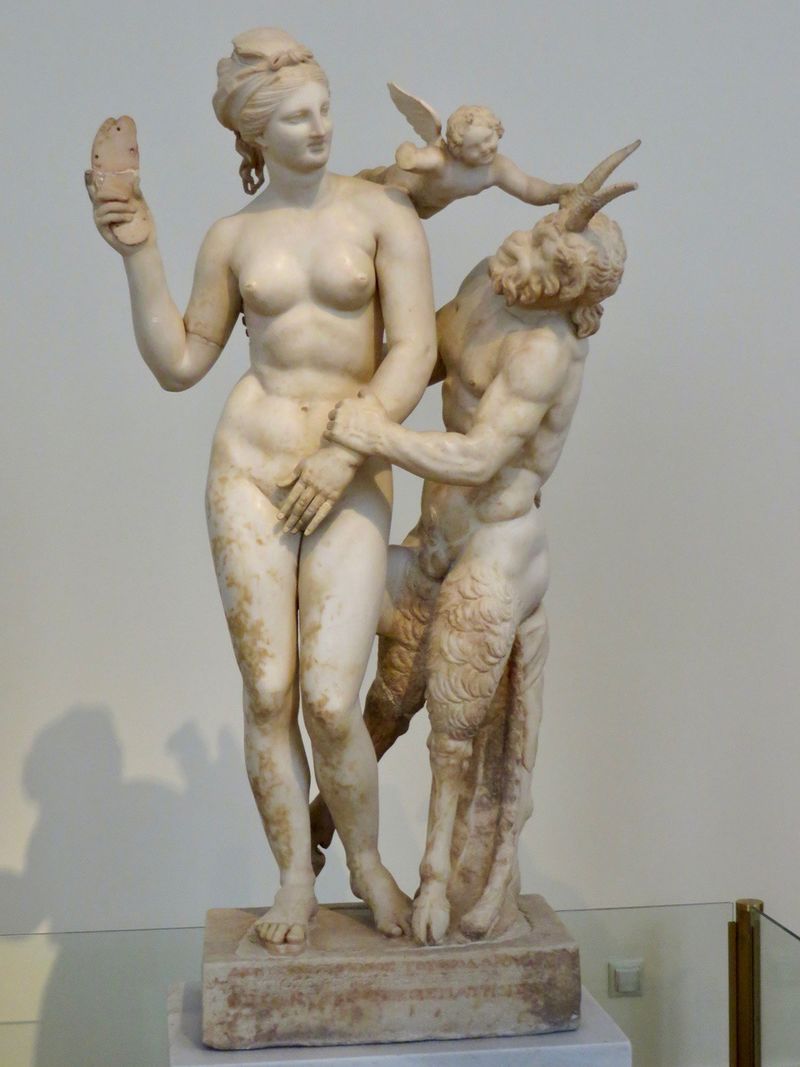 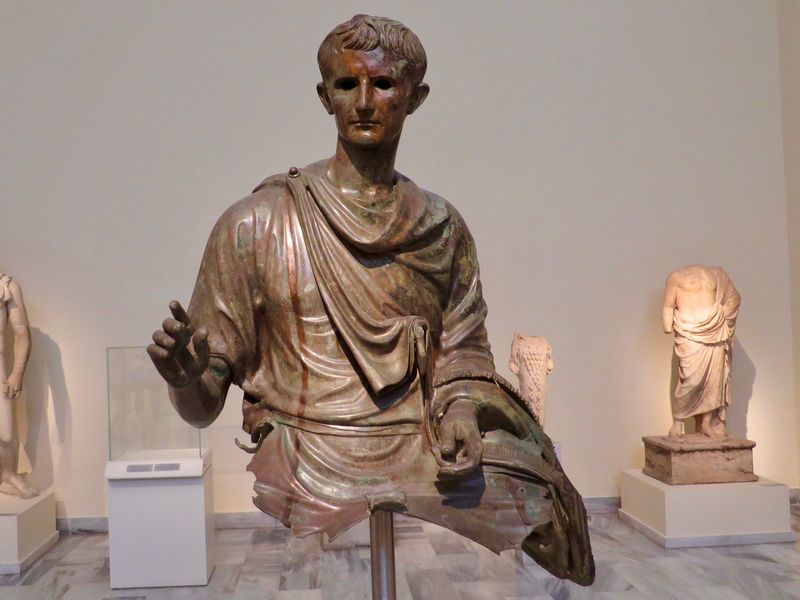 Around 5 pm, we took the metro to Syntagma square, walked to the Temple of Olympus Zeus, which was already closed though it was supposed to be open. It can be seen easily from Hadrian’s Arch so it was not a disaster. We walked to Hadrian’s Arch, looking at it as well as the temple ruins. Then we walked part of the city walk tour — Lysicrates Square and monument, then up the stairs and along the road on the northeast side of the Acropolis, walking through a bit of Anafiotika, down to the view of the Roman Forum and Tower of the Winds. Then we walked down the pedestrian Adrianou back to Lysicrates square.
From there, using Google maps, made our way (up and down) to Spondi, a 2-Michelin-star restaurant where we had 8 pm reservation with 4 other people, one of which was treating (or his company was). We shared an appetizer of wild mushrooms. For our main courses, Larry had lamb, Eileen had Challens duck, and we shared a delightful fraisier-type concoction for dessert. This picture is at 8 pm, when the restaurant first opened and we were the first people there. 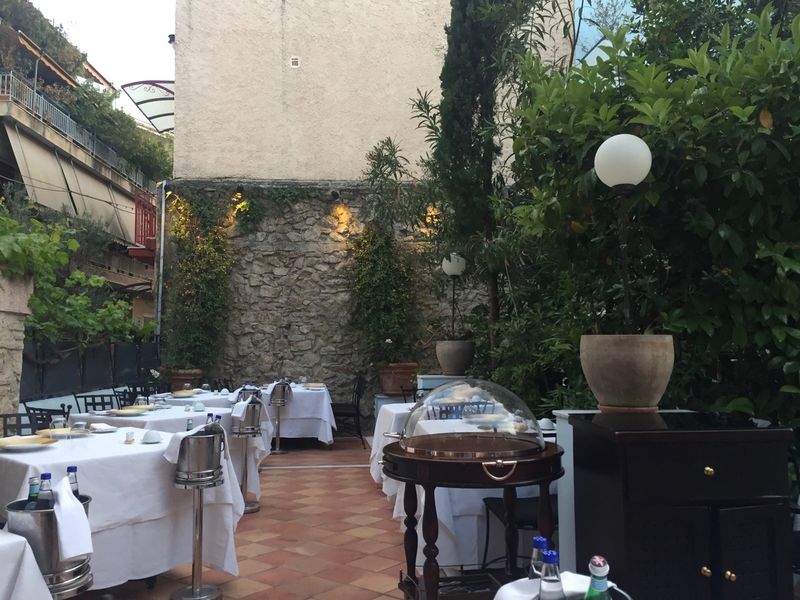 After this amazing meal, we walked back the one mile or so to the hotel around midnight.
Links
National Archeological Museum
Spondi
Link to Day 4
— Eileen Samberg

Published by Eileen and Larry Samberg on April 25th, 2018