This is the second time that we have hiked to the summit of Black Mountain in Benton. The first was in August of 2014 and was our very first blog post. As noted in that post, there are two trails to the summit. The Chippewa Trail approaches from the southwest and the Black Mountain Trail approaches from the north. We hiked the Chippewa Trail last time so this time, the Black Mountain Trail. The Black Mountain Trail is a bit less steep and therefore a little longer.
The trailhead is off of Howe Road which comes off NH 116 in Benton. The first part of Howe Road is paved. Then it switches to gravel. At the end of the short gravel stretch is a wooden fence with a sign pointing to the trail. This is the first place that you can park (and where we parked, elev 1550 feet). There is also a house off to the left. A short walk (0.2 miles) up the trail from there (which can be driven if you have a car with reasonable clearance – in retrospect, we probably could have done it in the Prius) is the actual trailhead and more parking. (All mileage listed here is from where we parked and includes the 0.2 miles).
The trailhead. 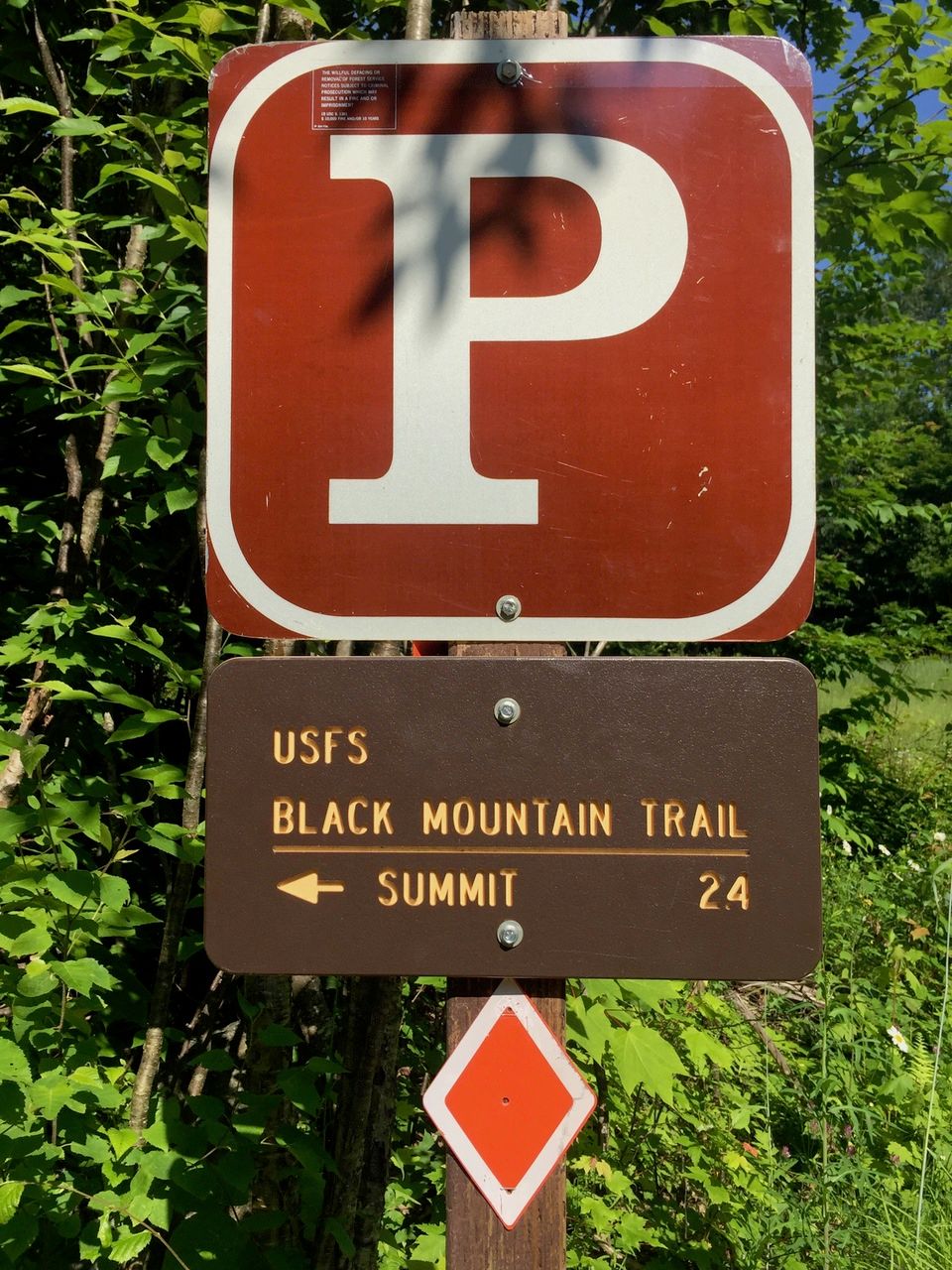 The first part of the hike is flat and traverses private land. At about .5 miles (elev. 1630 feet) there is a split and the trail bears left (with a sign showing the way). 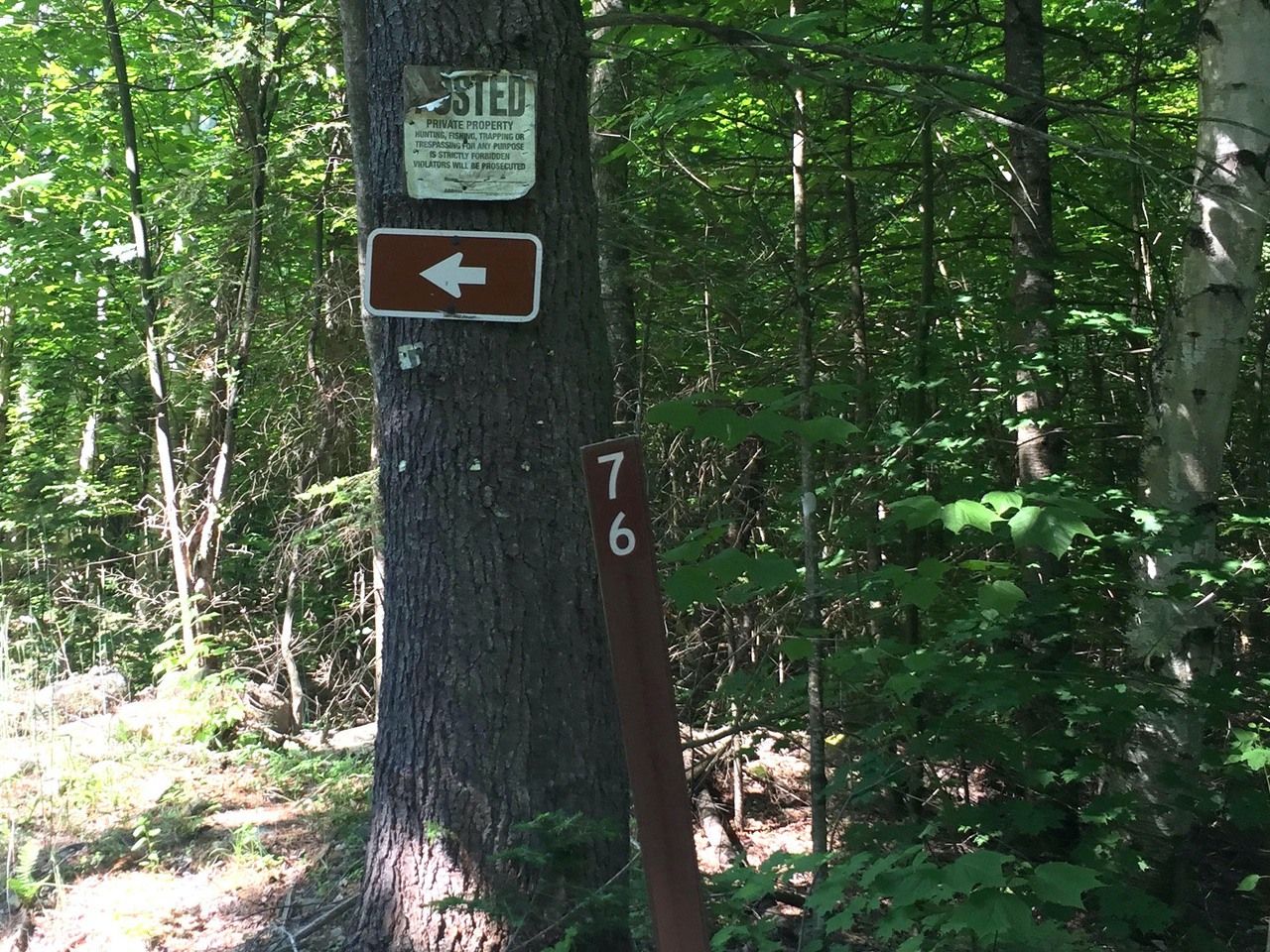 At .7 miles the trail enters the National Forest. 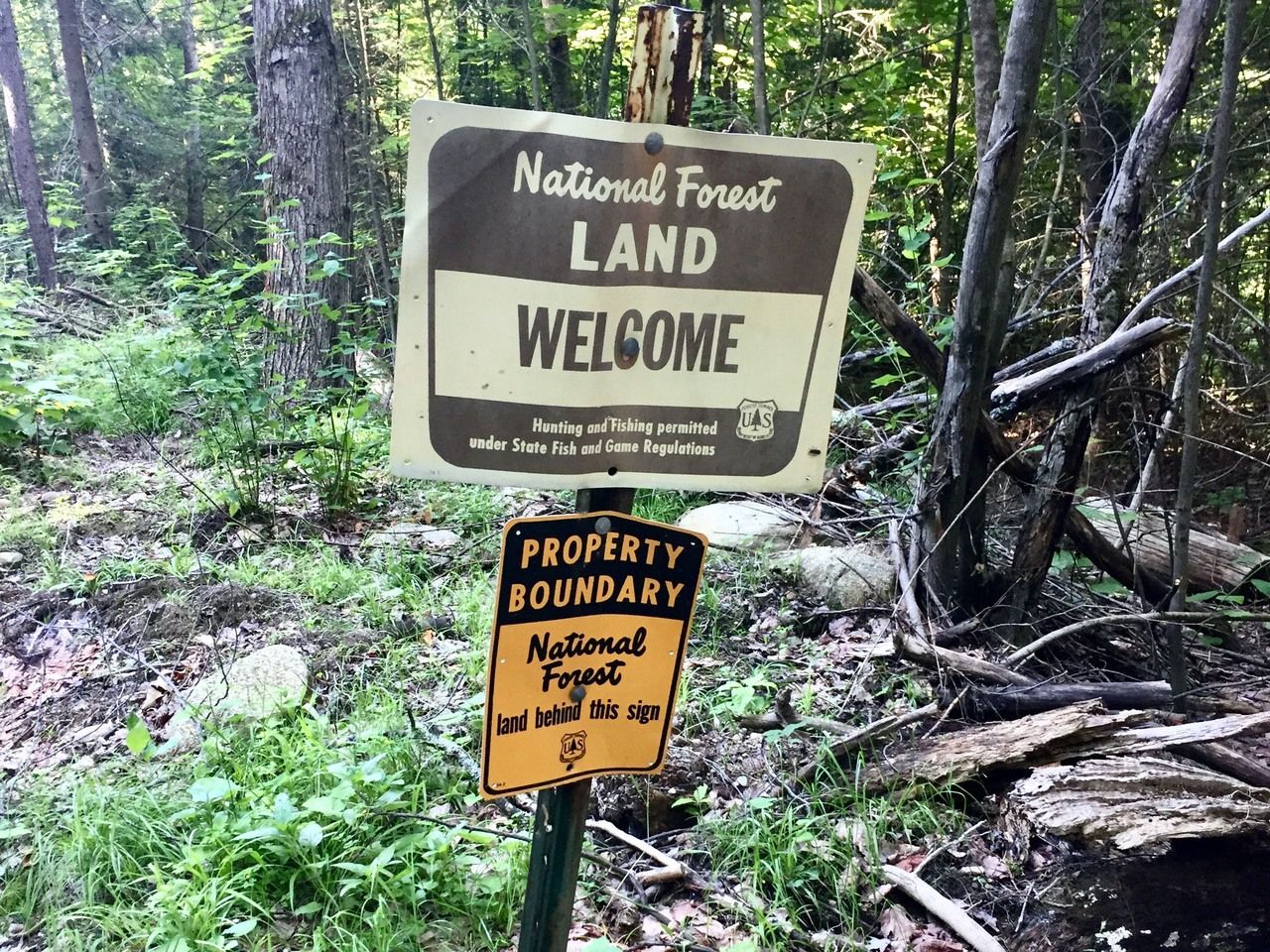 Walking a bit farther (at 1 mile, elev. 1770 feet) the trail enters an open area and bears left again with another sign showing the way. Up to this point the walk was almost flat, rising only 140 feet in the first mile from where we parked. 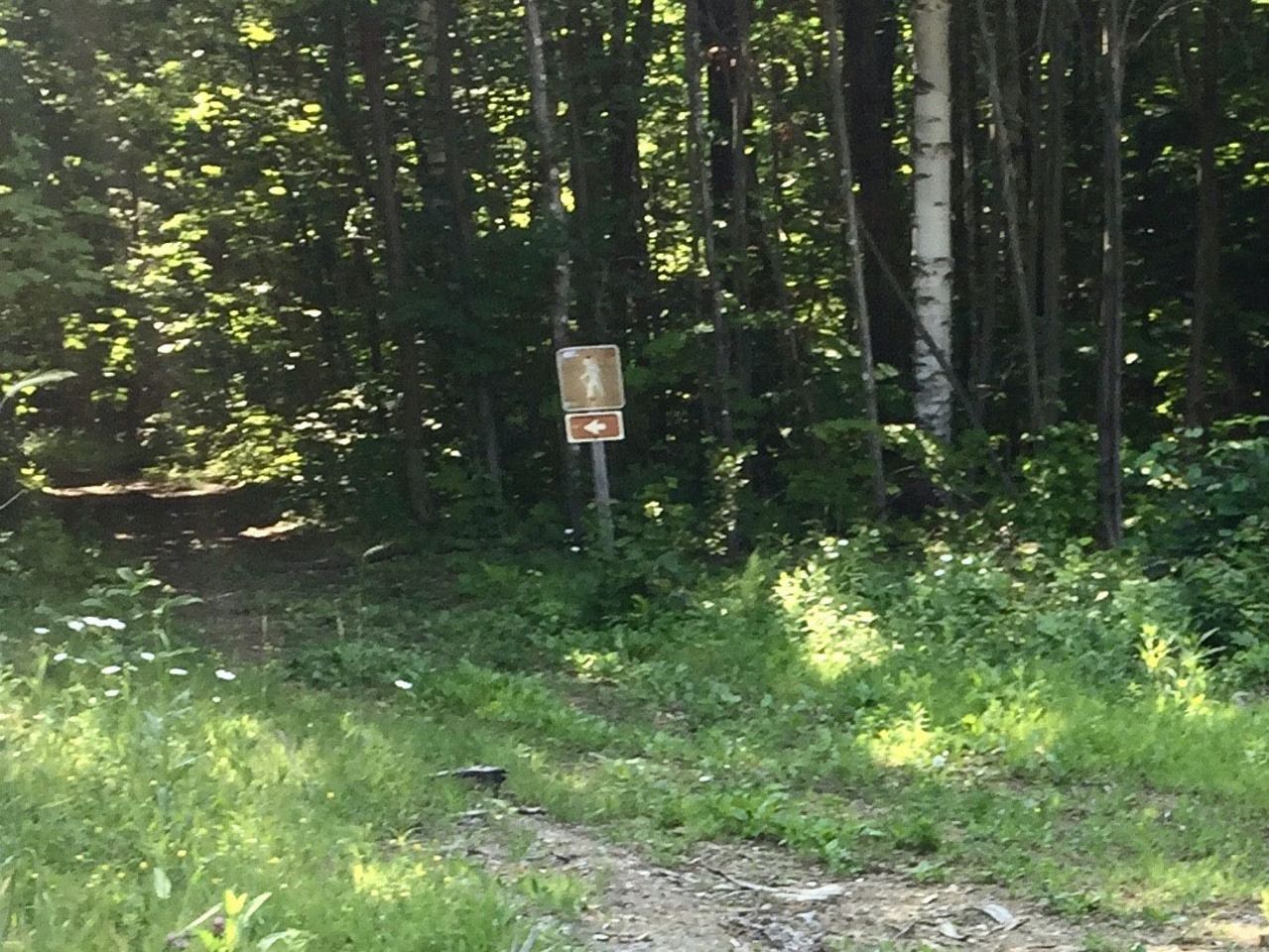 The trail now continued gradually upward. The surface was in good condition with a few roots and rocks. Over the next half mile we gained another 460 feet (which is actually fairly steep) and reached a switchback to the right (at 1.5 miles and 2230 feet). The surface of the trail became a bit more rugged (more roots and more rocks) but still not too bad. 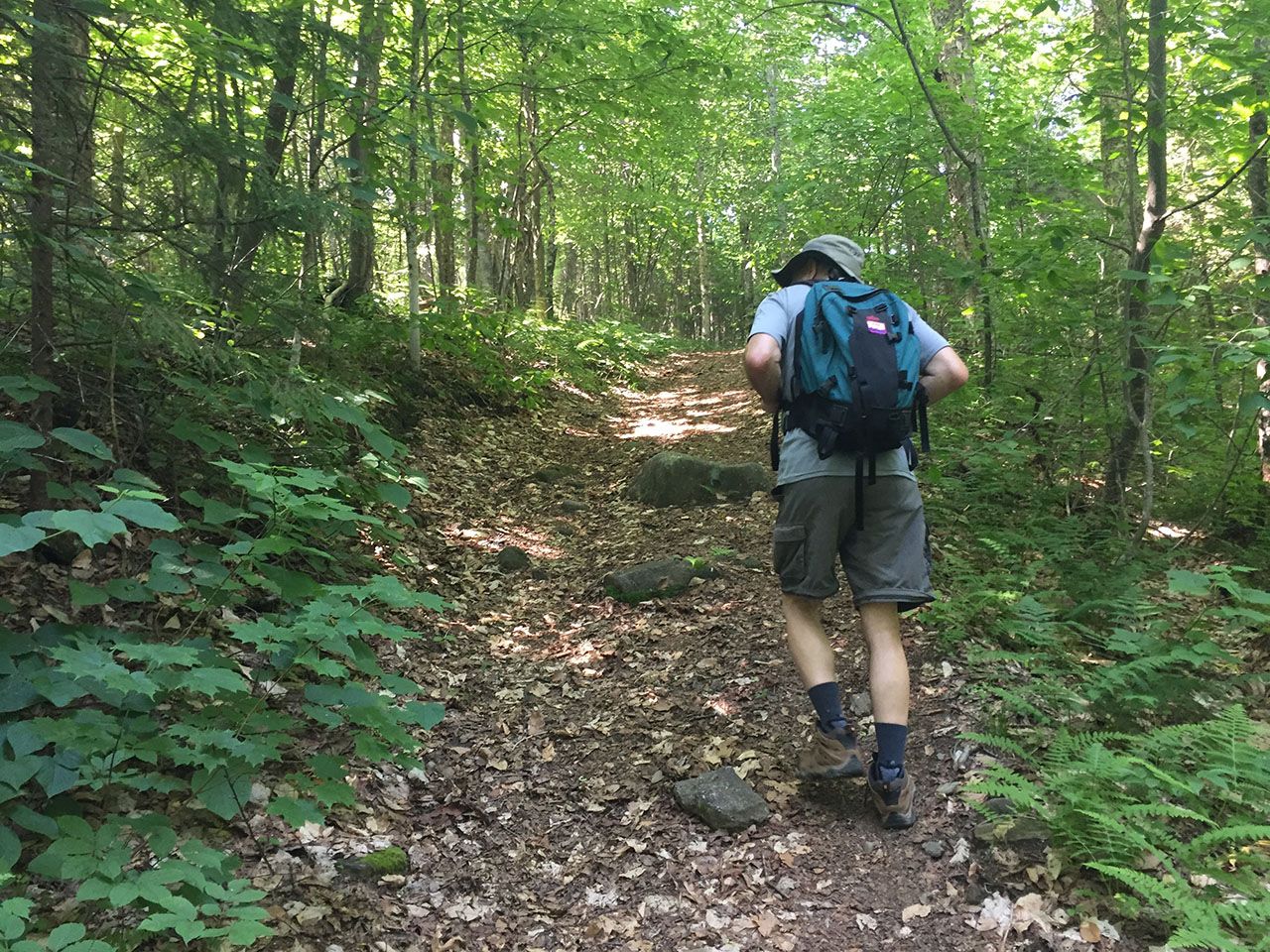 Another 0.2 miles later (elev 2355 feet) crossed a small stream (easy to step over). The surface got a bit more rugged, with some mostly avoidable mud, and continued at about the same pitch. 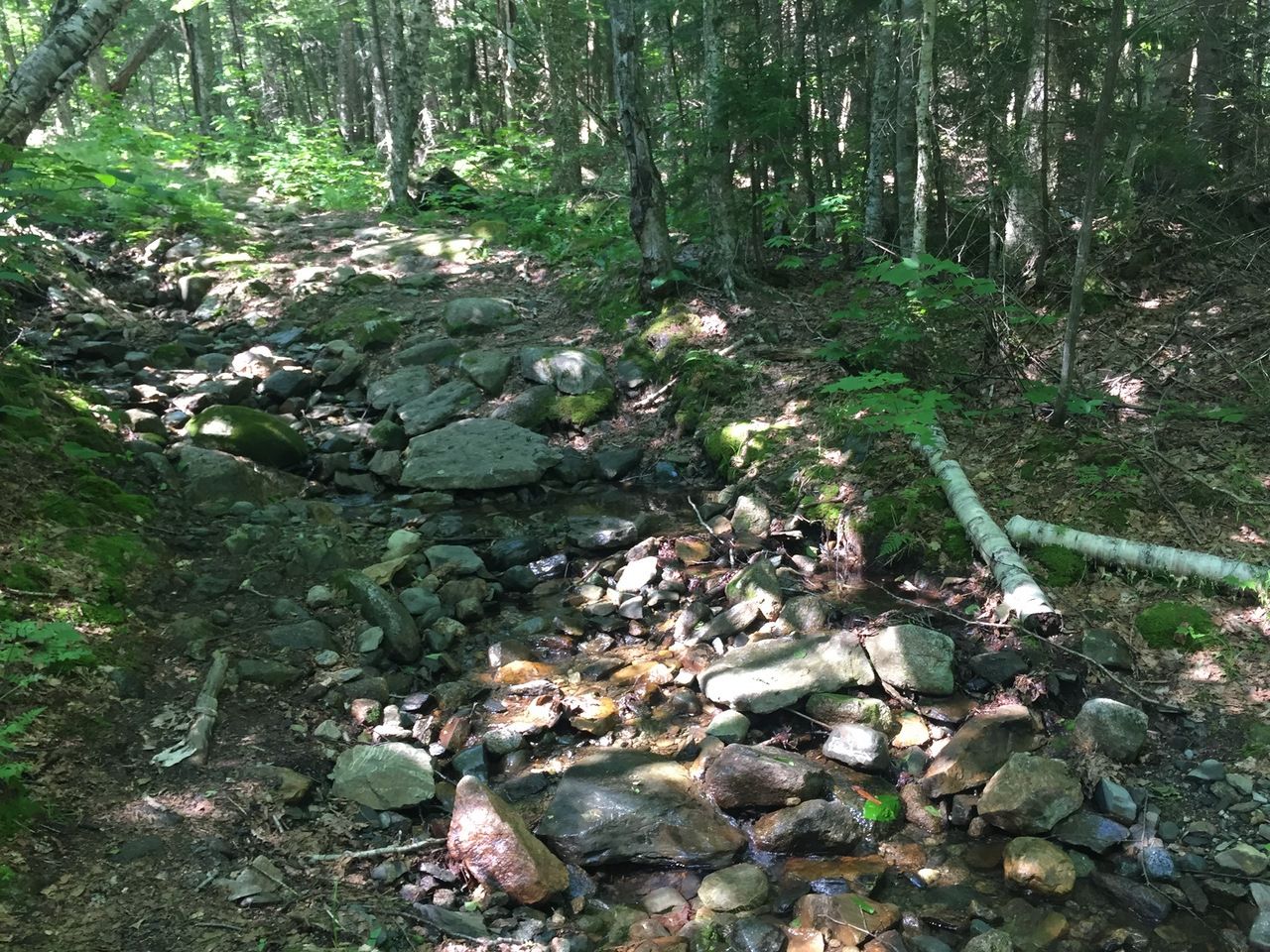 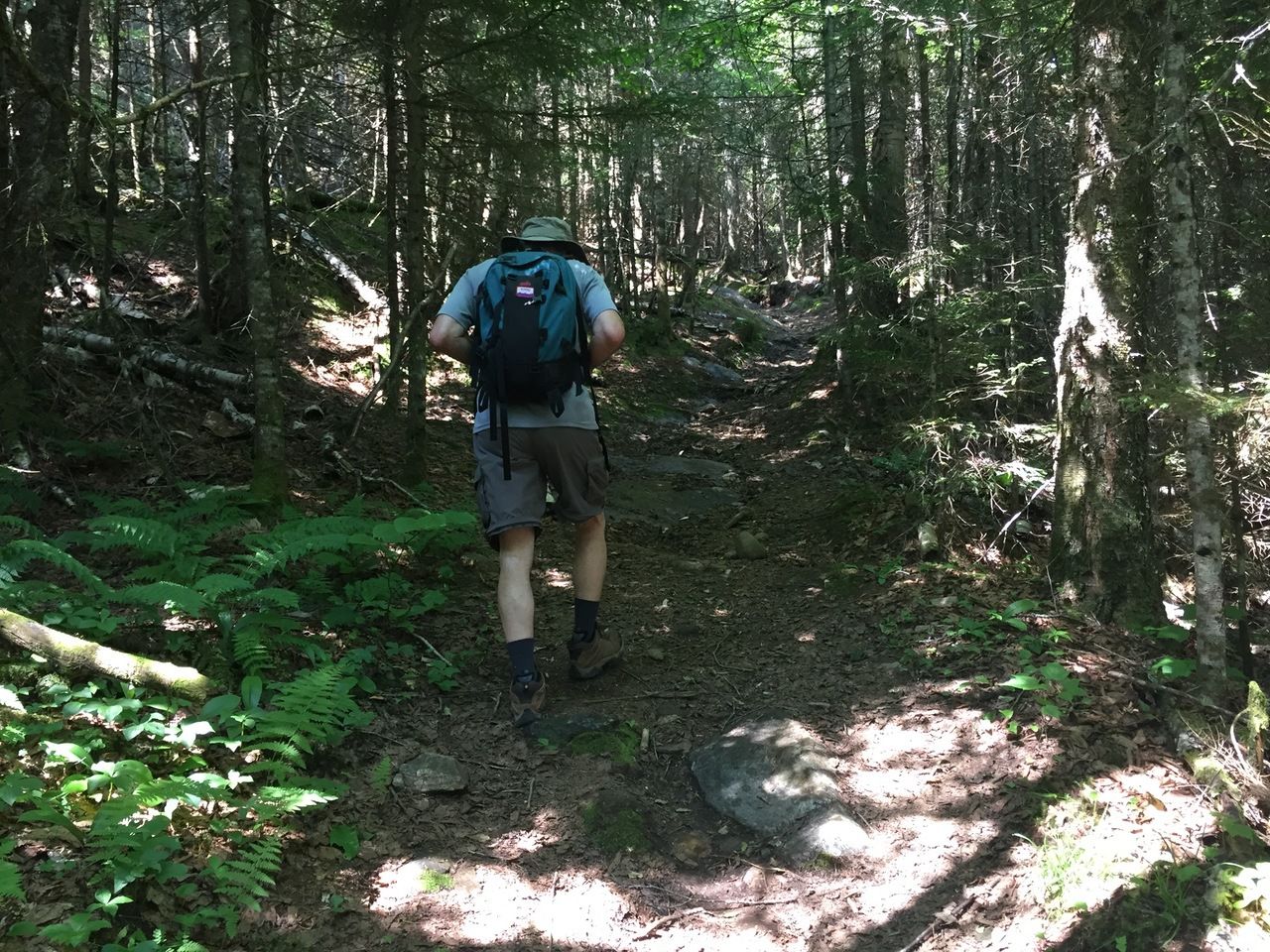 Some pretty bunchberry, which will have red fruit later on. 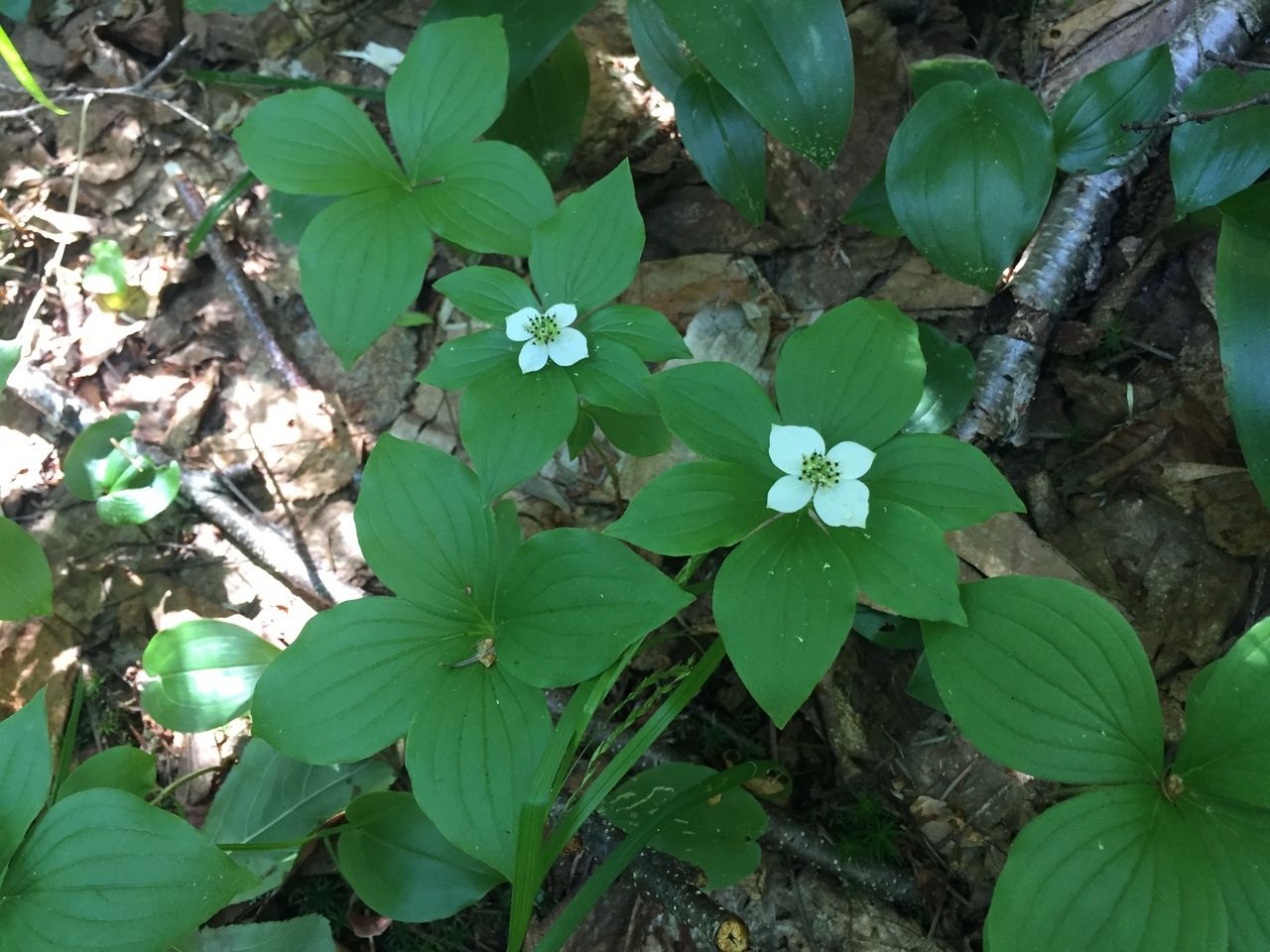 Lots of Clintonia borealis, blue-bead lilly, post flower, with fruit buds that will turn bright blue later in the month. 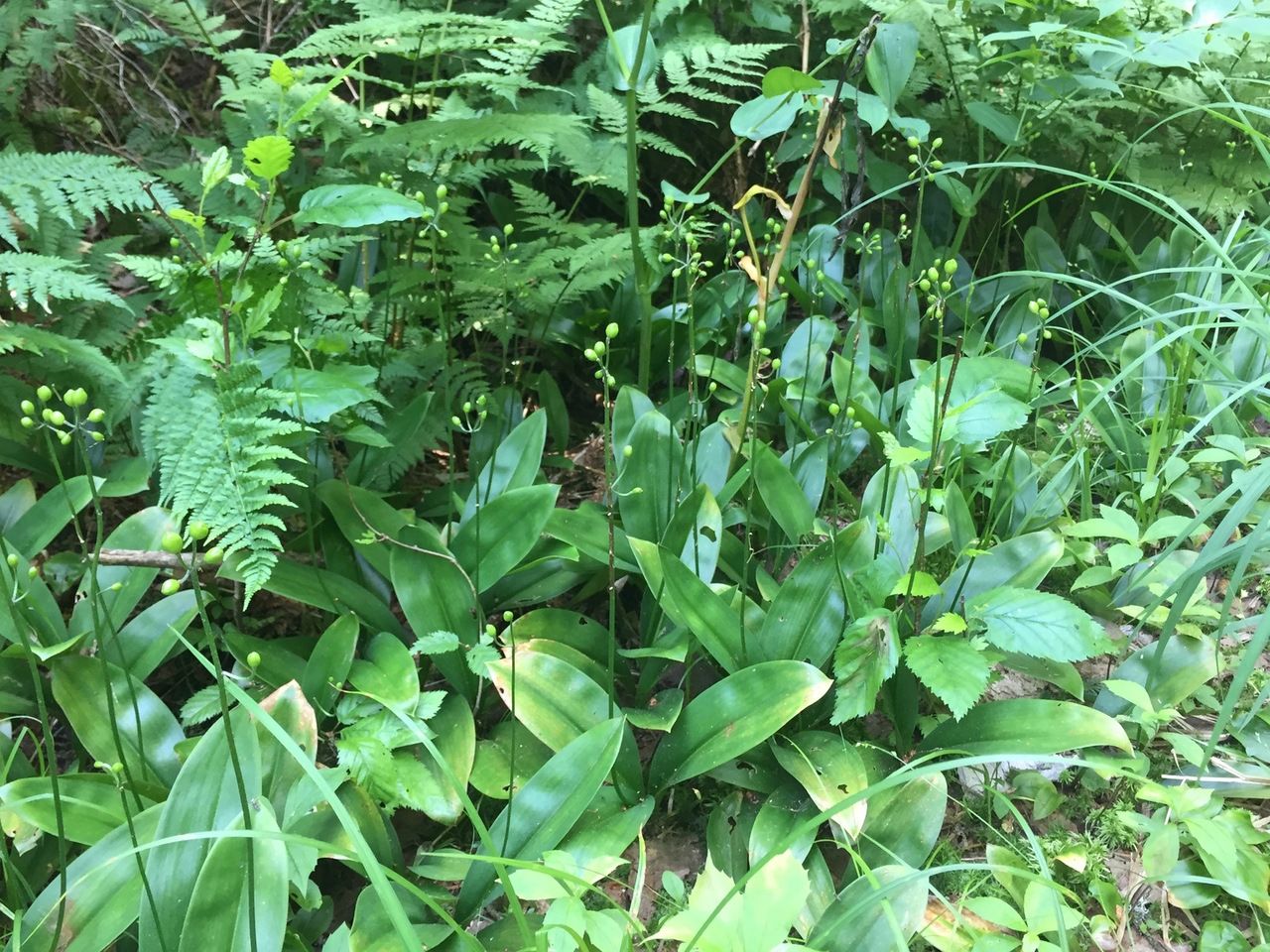 At 2.3 miles (2780 feet) we met the Chippewa Trail coming in from the right. At this point we were just another tenth of a mile from the 2830 foot summit. It took us about an hour and forty minutes to reach the summit (including about 10 minutes of stops for picture taking). The summit path leads to center of the ridge, where there was once a fire tower. 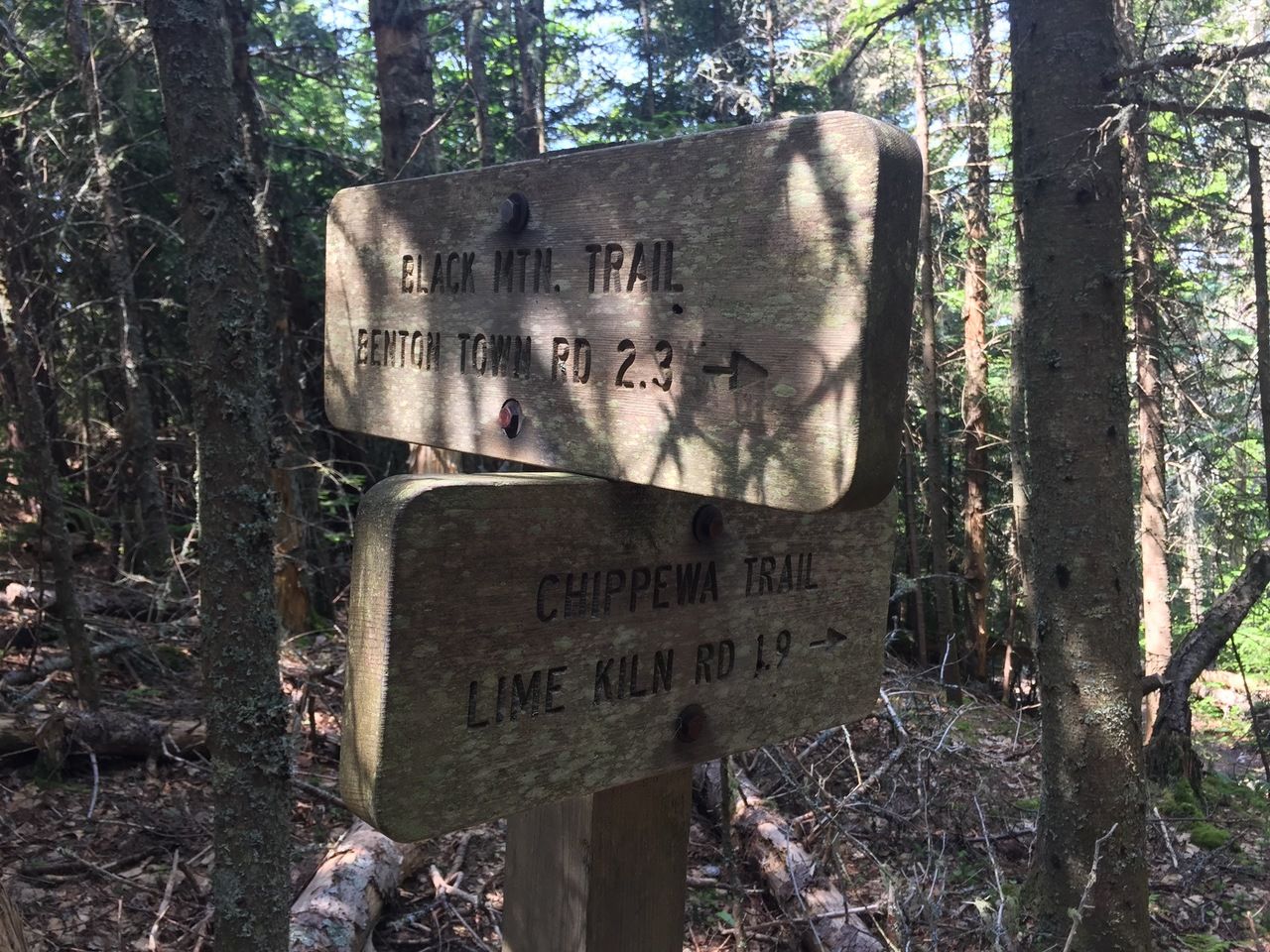 View from the western edge of the summit ridge, overlooking the Connecticut RIver Valley. 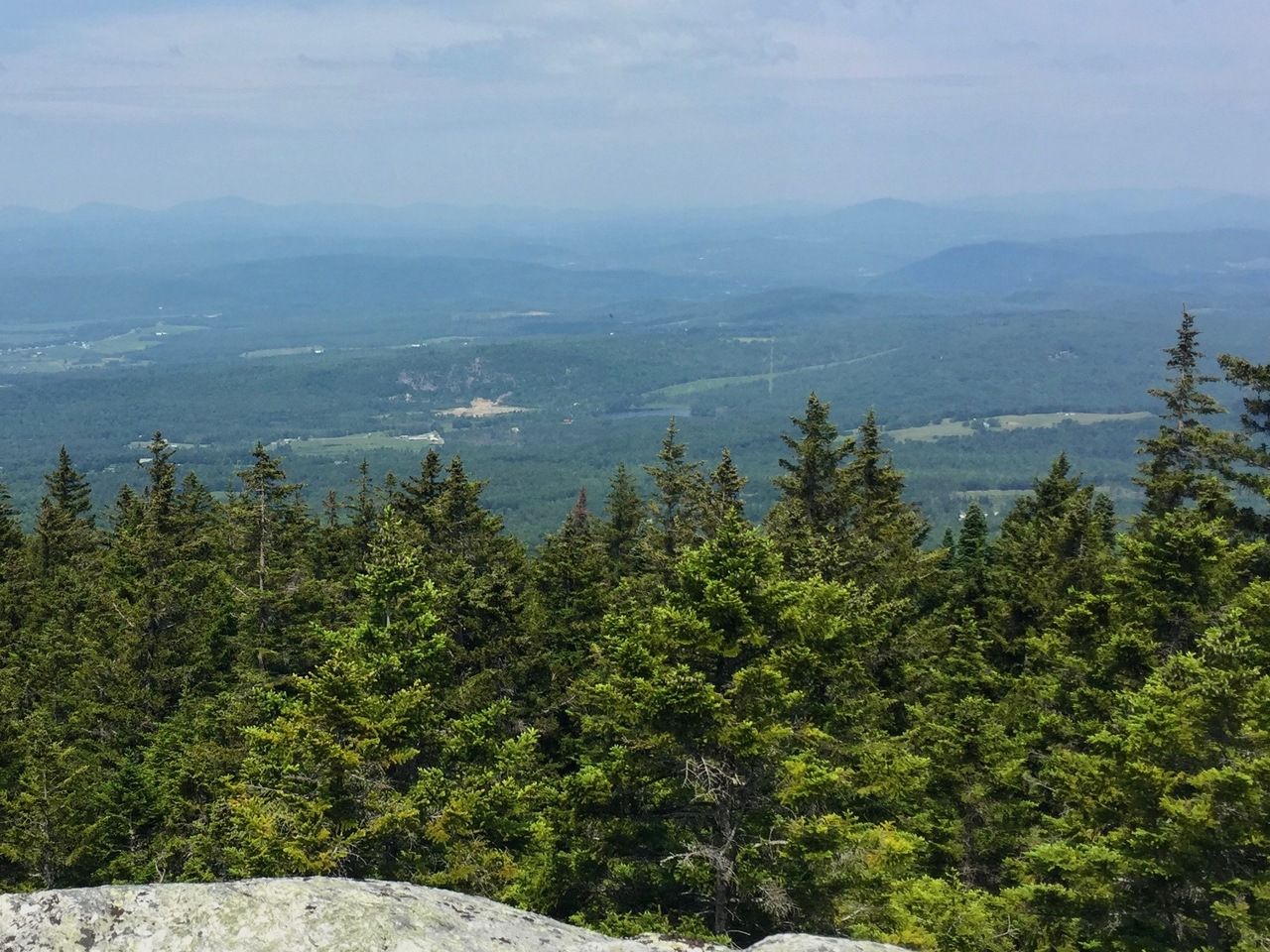 On the western edge of the summit ridge, so pretty and peaceful. 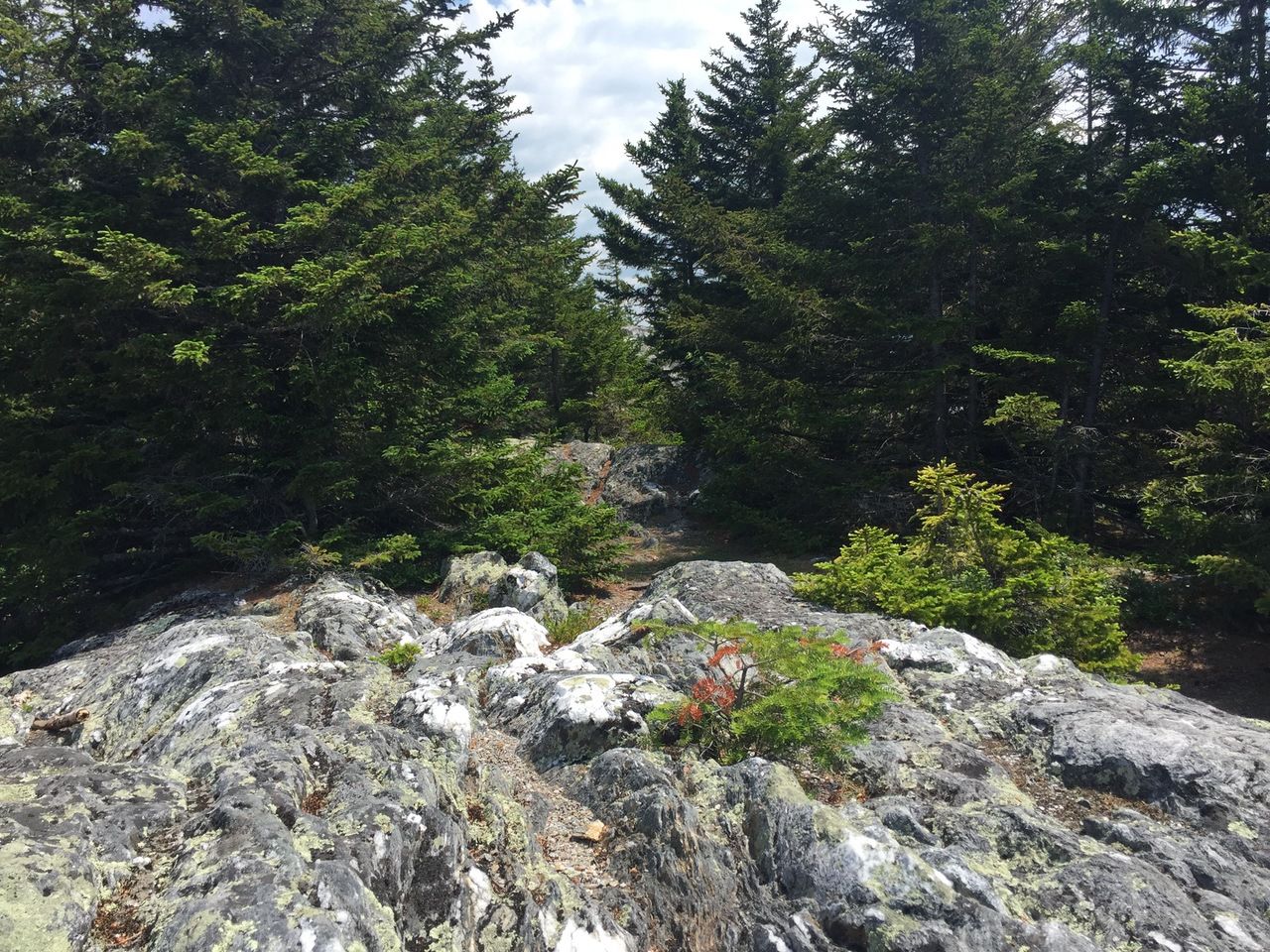 Larry on the western edge of the summit ridge, with Smarts Mountain and Mt. Cube in the far background. 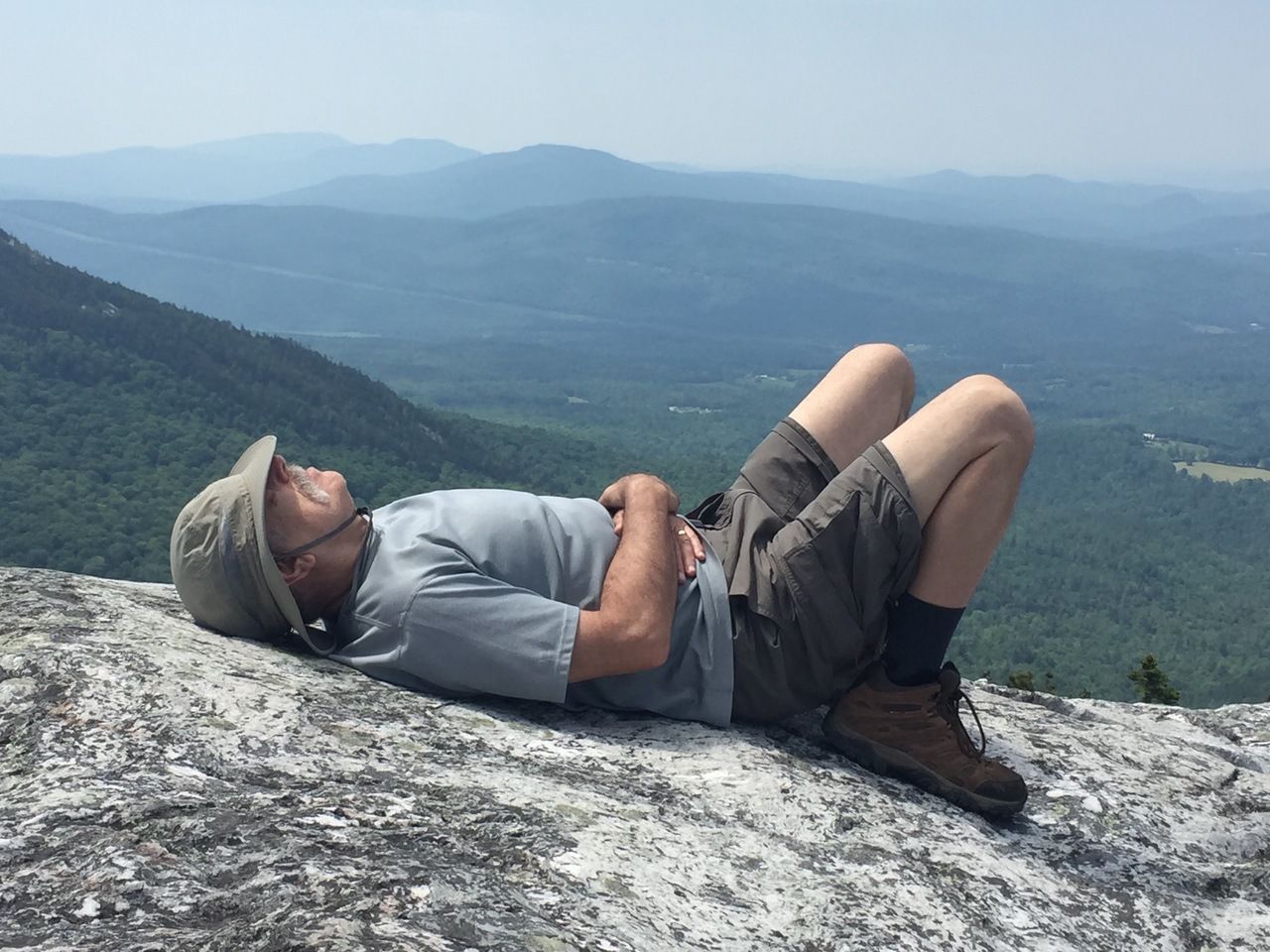 Beautiful quartzite and other markings in the rock. 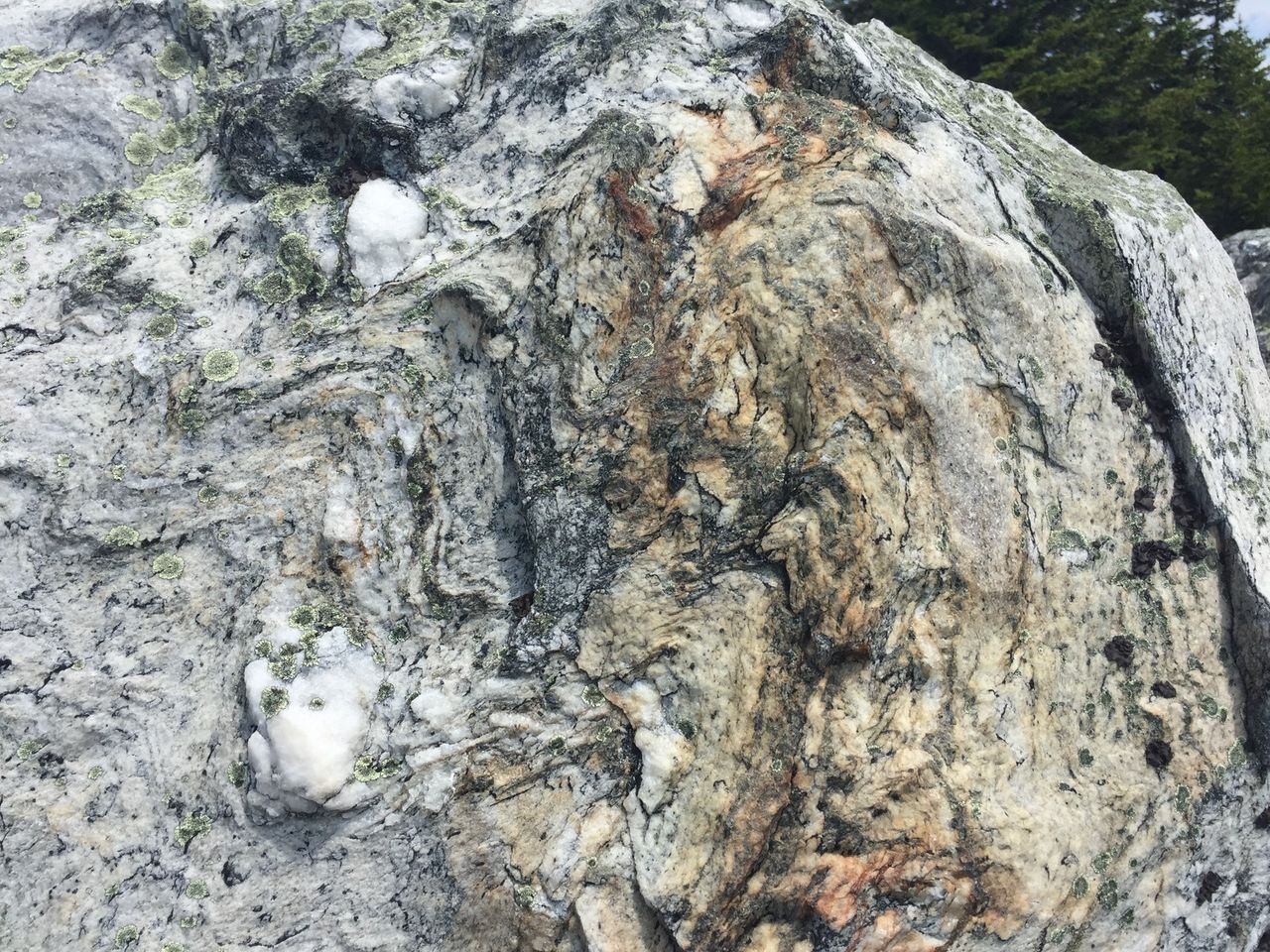 About 150 yards east of the old fire tower site, over ledges and faint paths through scrub, not easy to find, is the Tipping Rock, with great views of Moosilauke, and views of the Kinsman Ridge and the Franconia Ridge. (You can see all the wandering around to find it on the Google Earth photo.)
Eileen at the Tipping Rock. 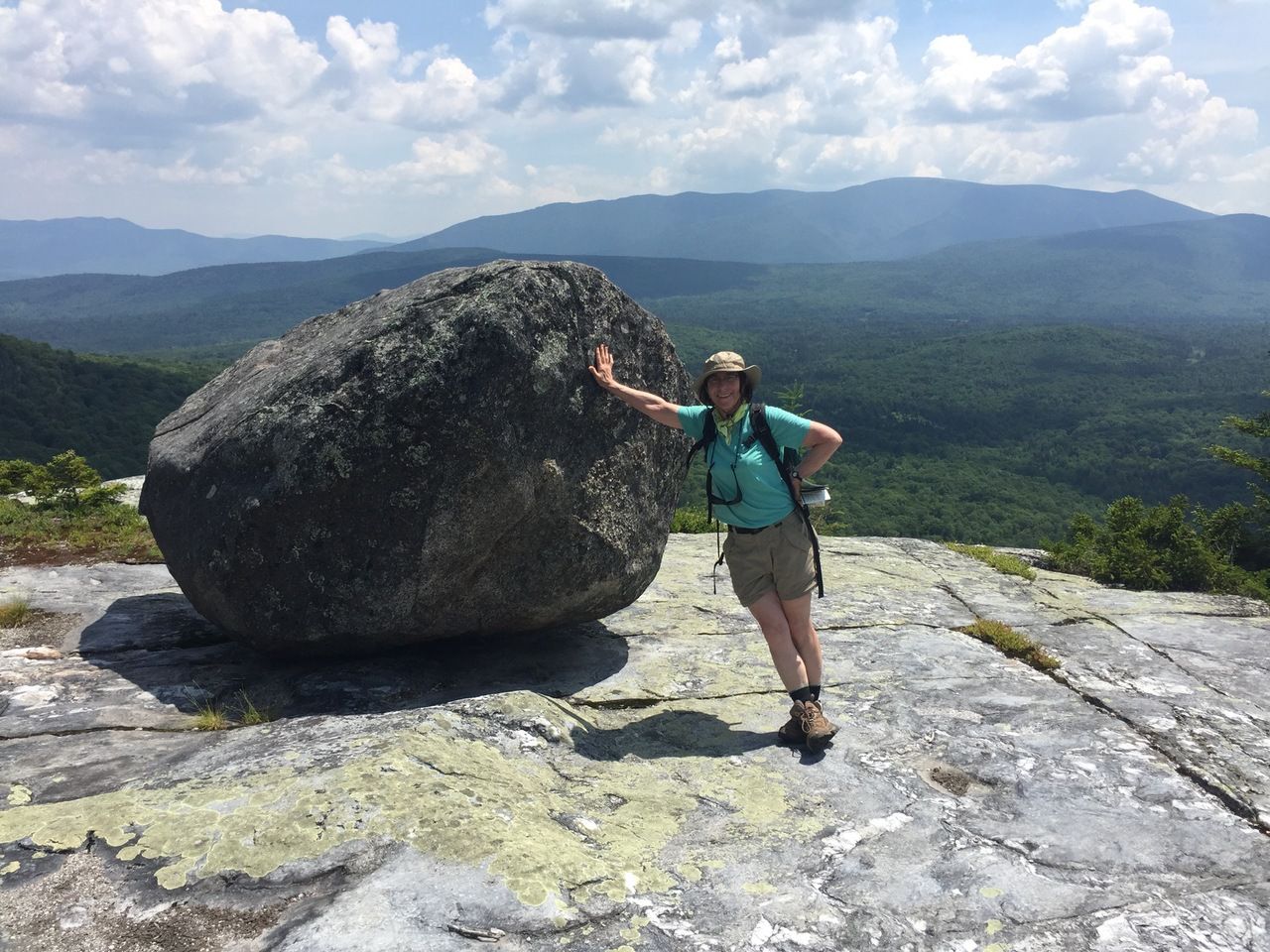 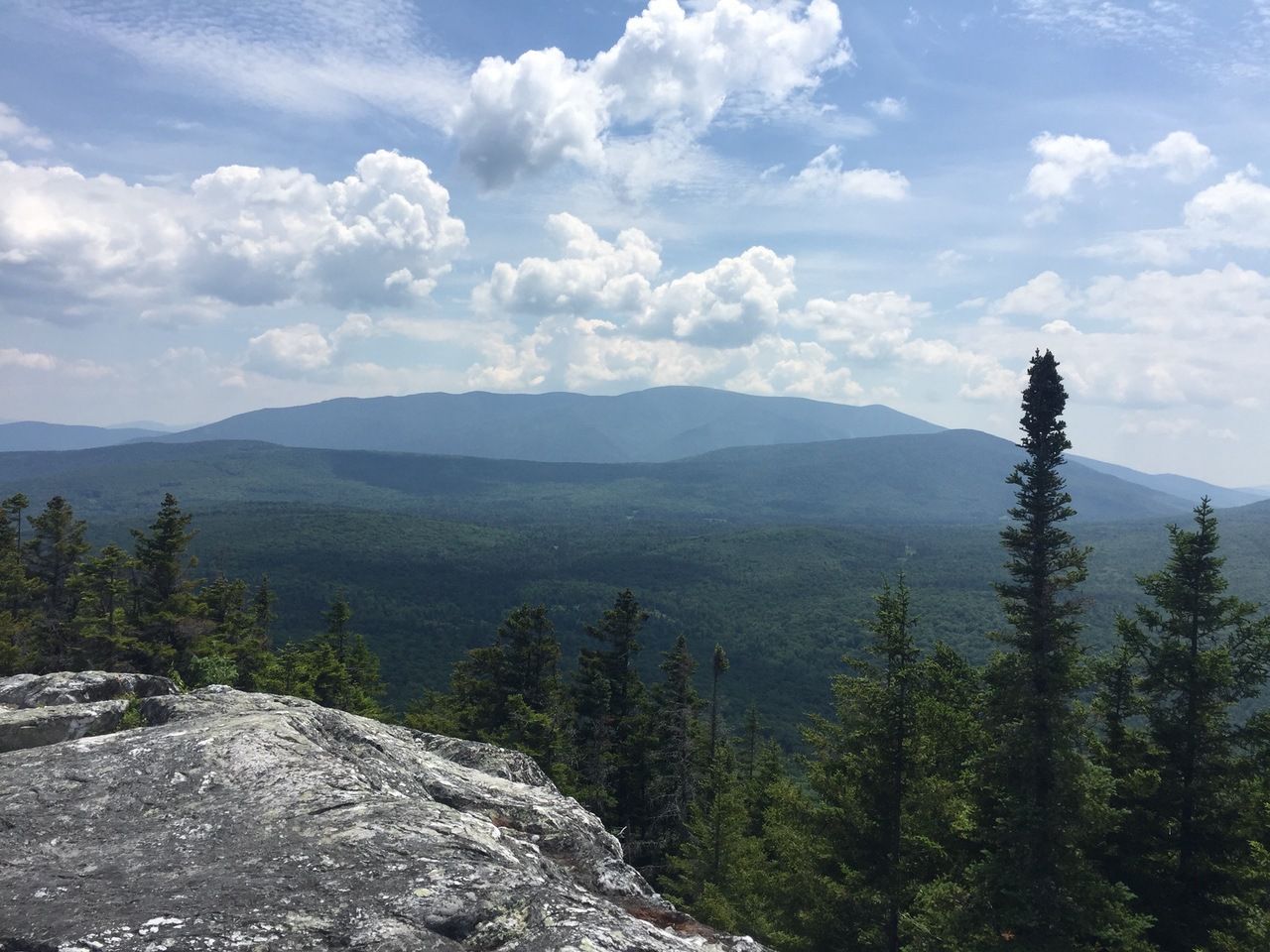 Kinsman Ridge and a little bit of the Franconia Ridge behind. 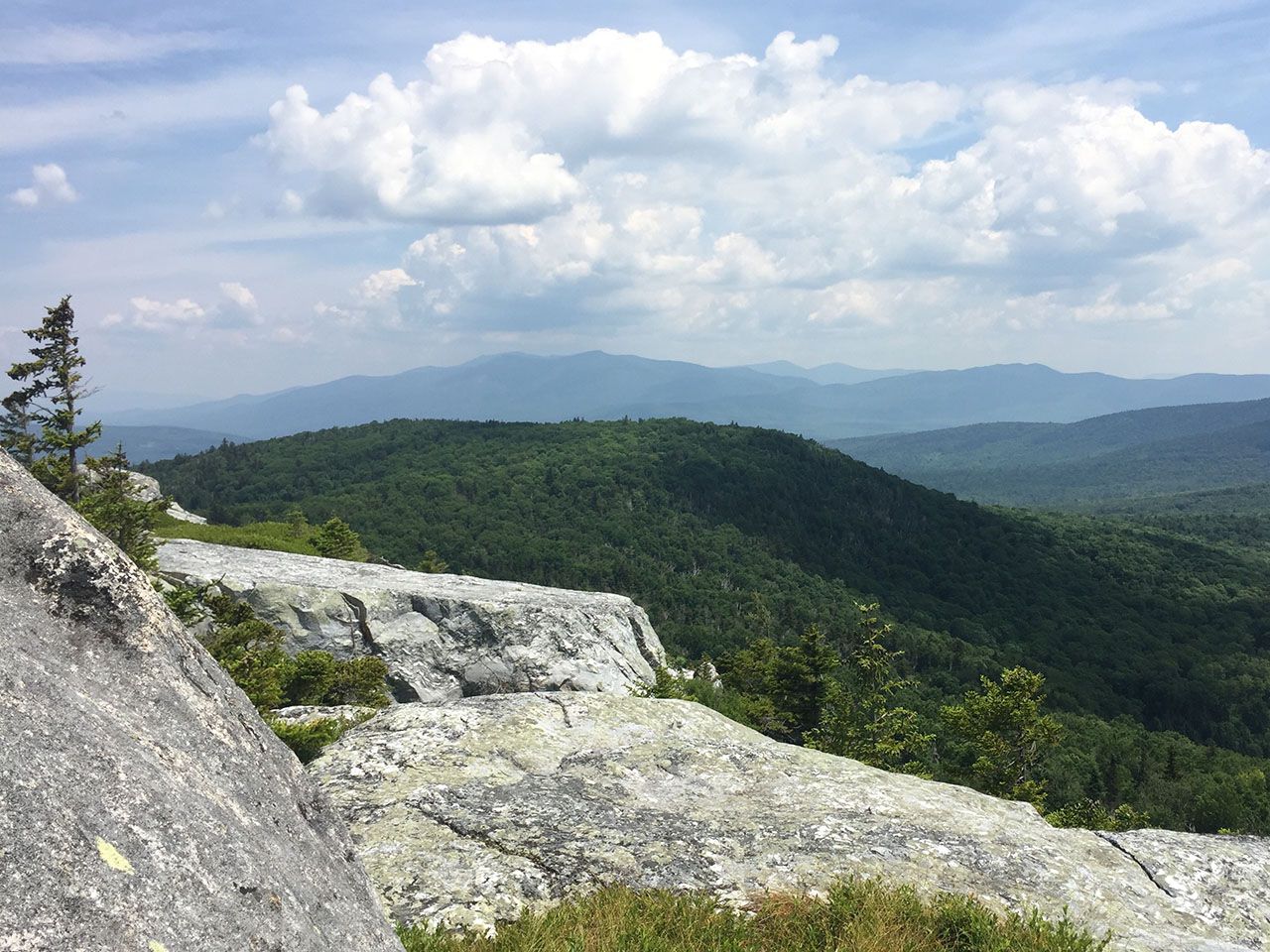 With some amount of effort (and a scratched shin), Larry managed to climb the rock for a #samberging pose. 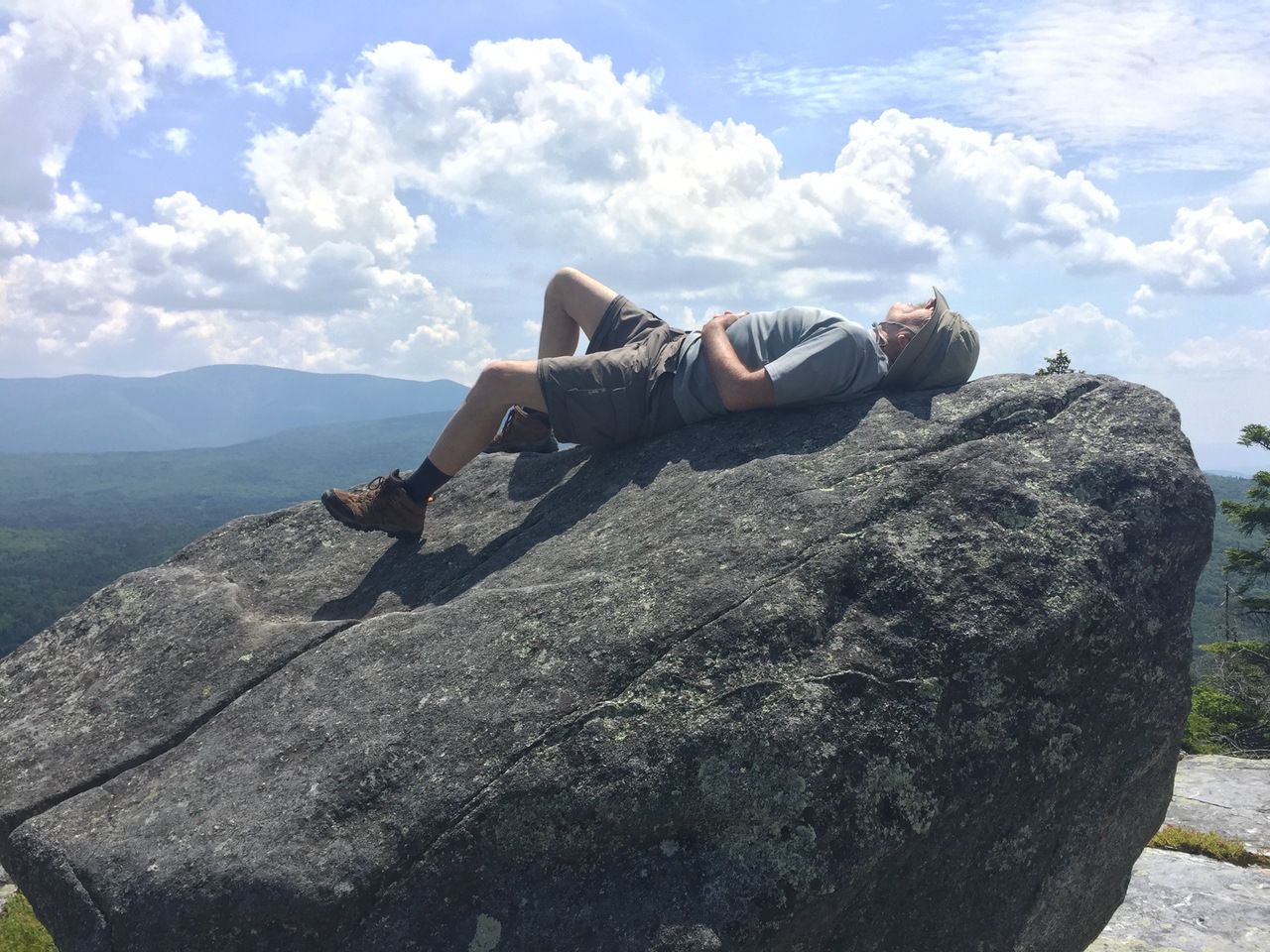 After relaxing on top, having some lunch, and wandering around looking for the tipping rock, we headed back down the way we came. It took us about an hour and 10 minutes to get down. 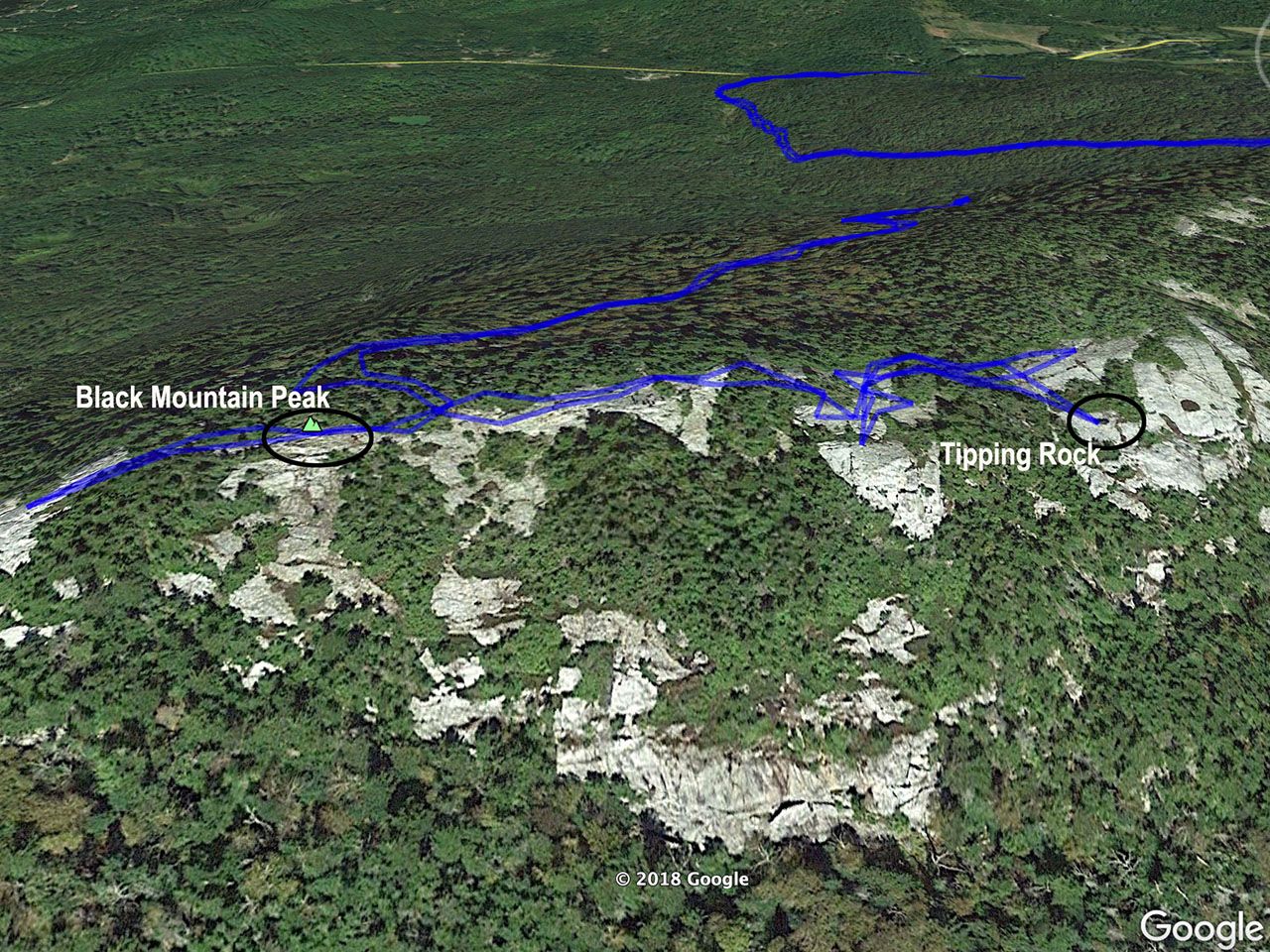 After the hike we went to Windy Ridge Orchard and split an Apple Cider Slushy (one of my —Larry— favorite things).

Published by Eileen and Larry Samberg on July 5th, 2019