Smarts Mountain (3238 ft) is the highest of the Middle Connecticut River Mountains. The Appalachian Trail (AT) runs over the western summit knob and passes by the eastern summit knob. The western knob has a 40 ft. fire tower with a 360 degree view.
We hiked up Lambert Ridge Trail (the AT), merging with the Ranger Trail, to reach the 52 With A View point at the 40 foot fire tower, back down the merged trails, taking the Ranger Trail back to our starting point. The hike is rated at 7.5 miles roundtrip and 2400 feet of elevation gain, though we did 8.1 miles (which included a .3 mile jaunt along the J Trail (AT) to and from the point that passes by the eastern knob.
The trailhead for both trails is on Dorchester Road, 5.1 miles east of NH 10 in Lyme (elev 1116 ft). From Lincoln, it might be better to go via 25C and NH 10, rather than 25A. Going by 25A has a stretch of dirt/gravel on Acorn Hill Rd, nicely graded, but still dirt/gravel.
The Lambert Ridge trail is a 3.9 mile trail to the Fire Tower on the western knob of Smart Mountain. It has steep sections to attain the ridge, and then a long walk along the ups and downs of the trail before its ascent to Smart. There is a combination of forest, ledge, and switchbacks along the way. 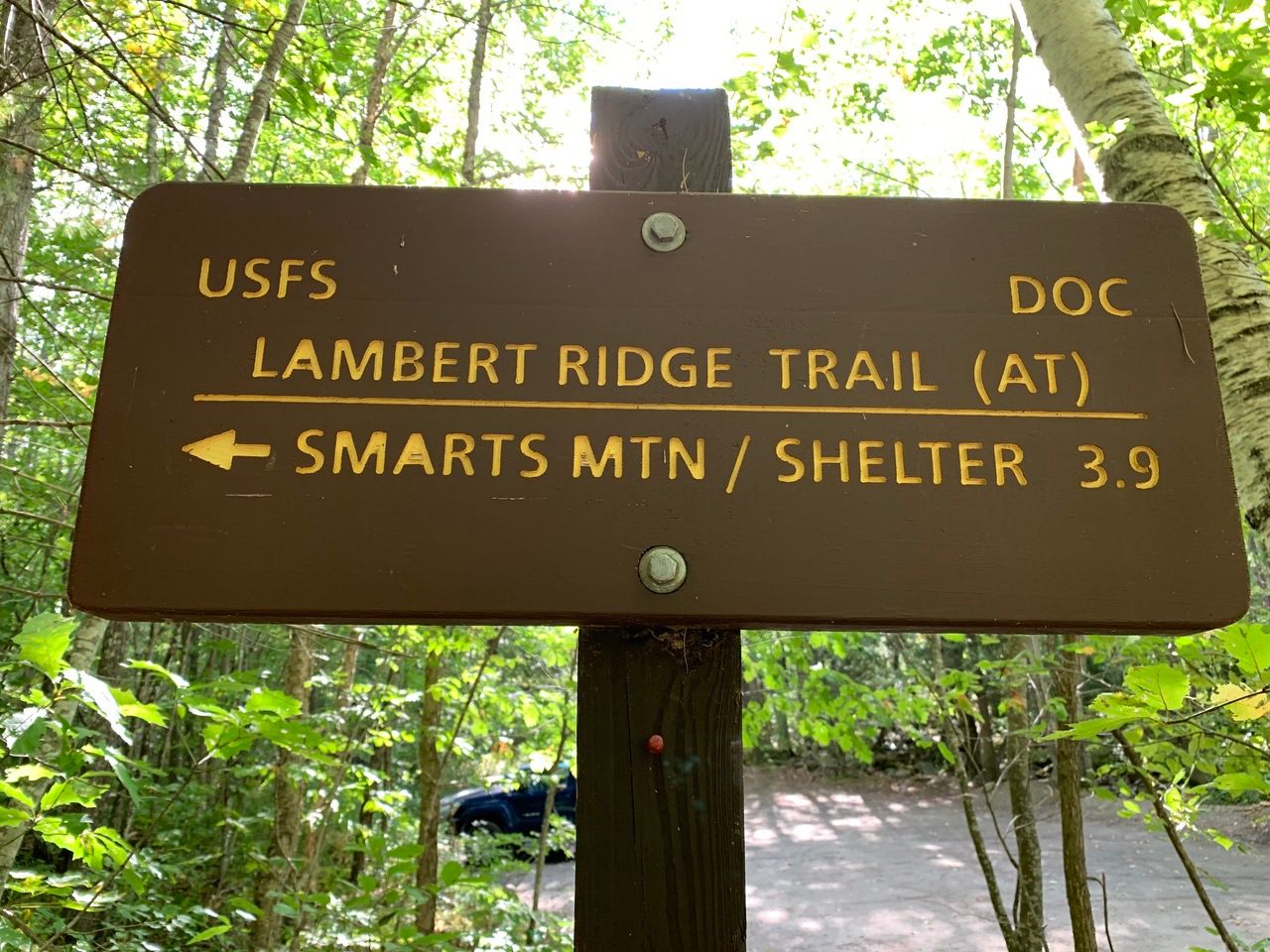 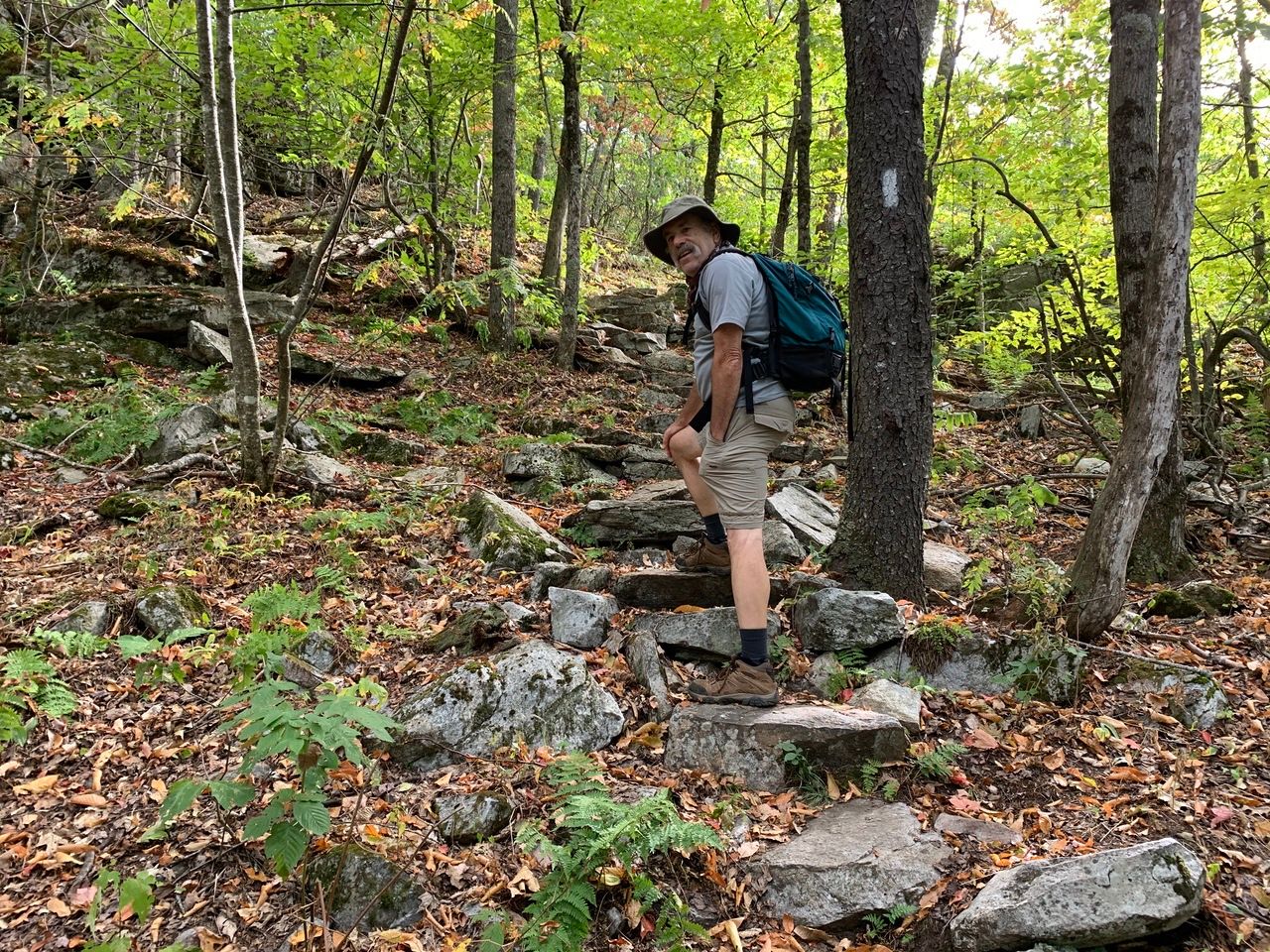 The first open ledge and view, is at .8 miles, where there is a view to the southeast that includes Mt. Cardigan. 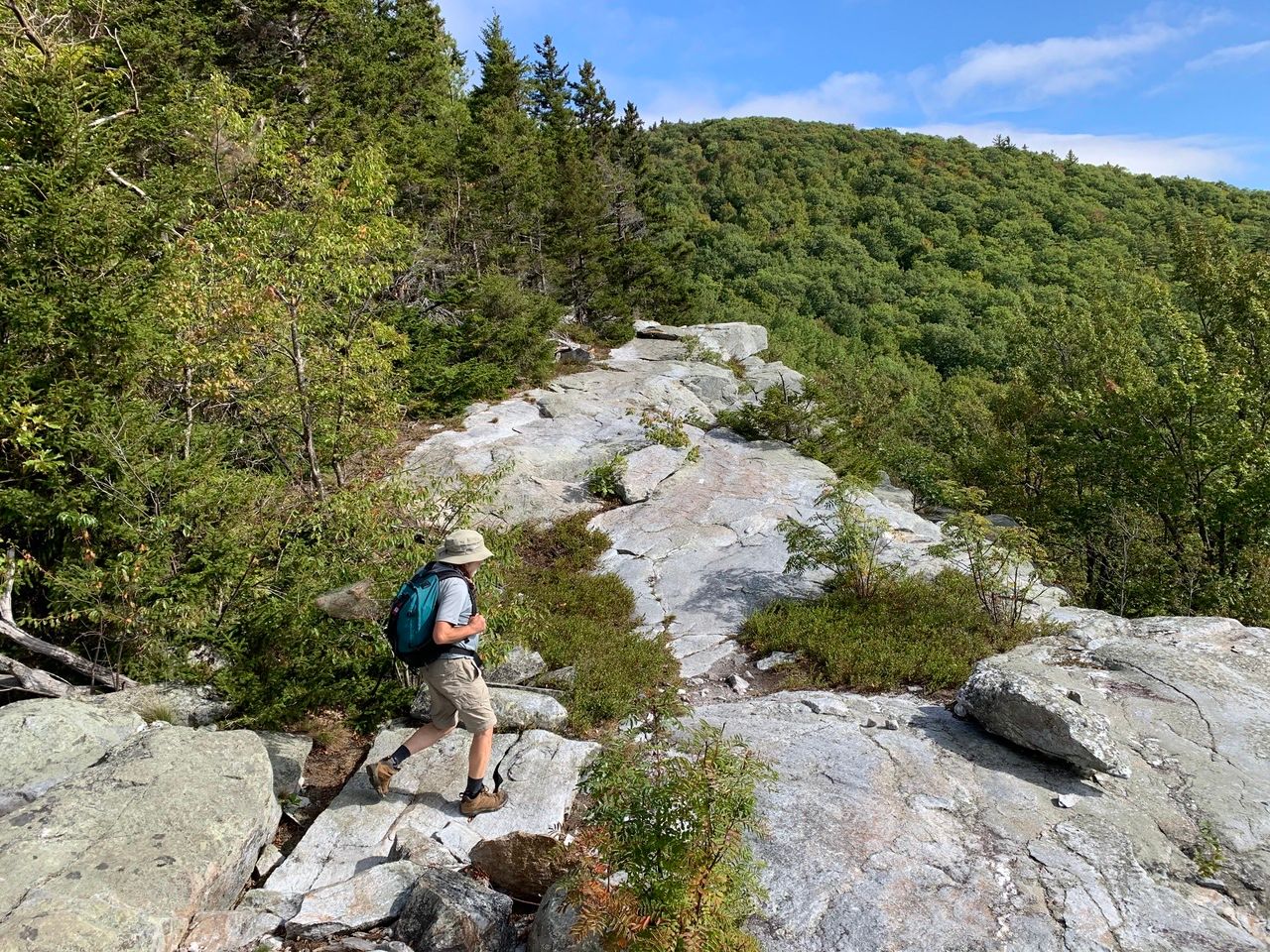 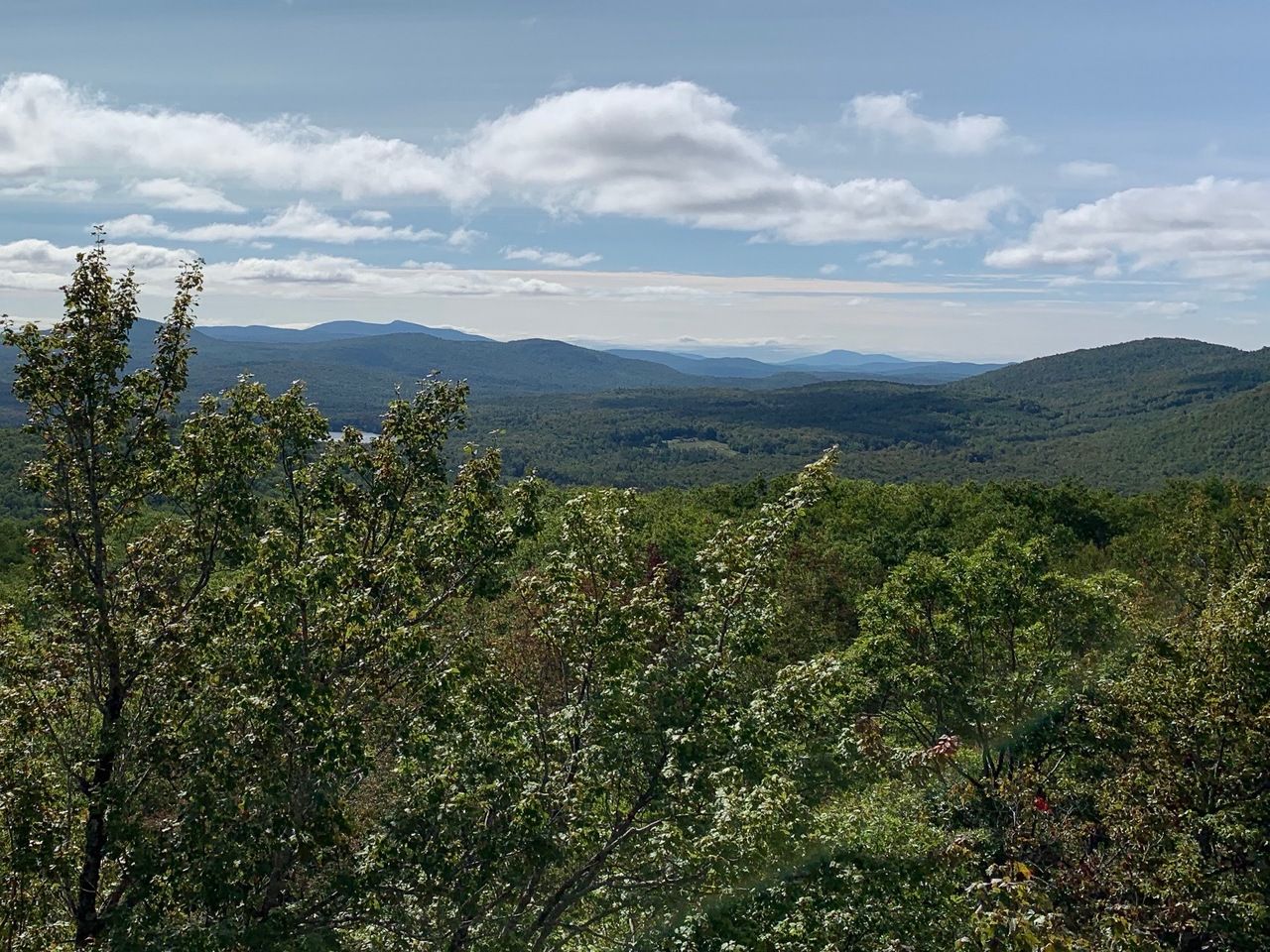 The trail continues with sections of steep, moderates, and flat grades, with some ledge outlooks. At 1.8 miles (elev. 2348), about an hour and 10 minutes in, there is the first view of the traverse to the shoulder and the summit of Smarts. 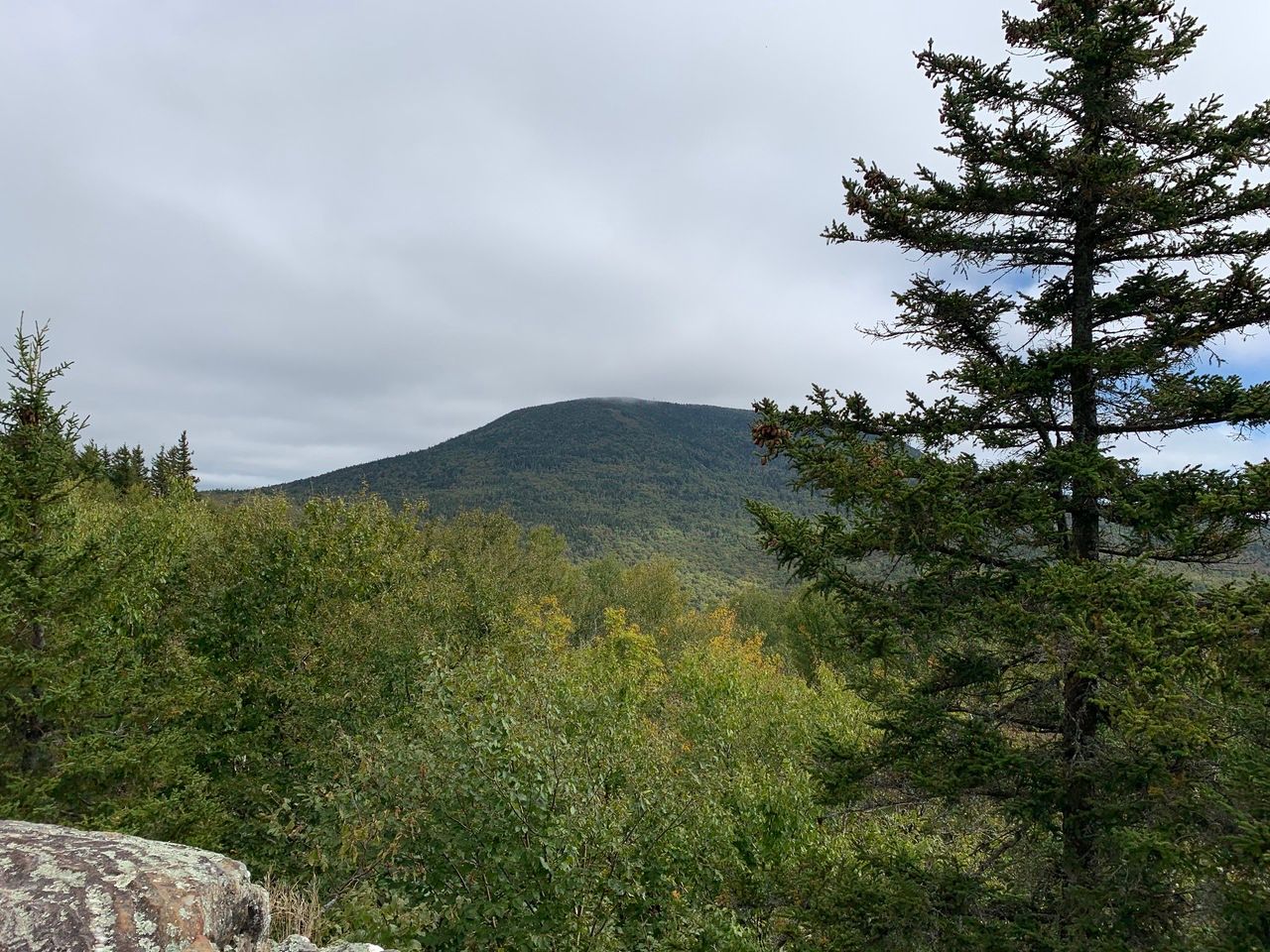 From the highest ledge along the traverse, the trail descends to a brook (dry in this very dry summer) at 2.3 miles, and begins to ascend along the shoulder.
The ascent of Smarts has some steep and rough sections before the Ranger Trail joins in at 3.3 miles (elev. 2683), about 2 hours and 10 minutes in. The combined trails then climbs steeply by switchbacks, and includes stairs of half-logs and metal rungs on a ledge section. 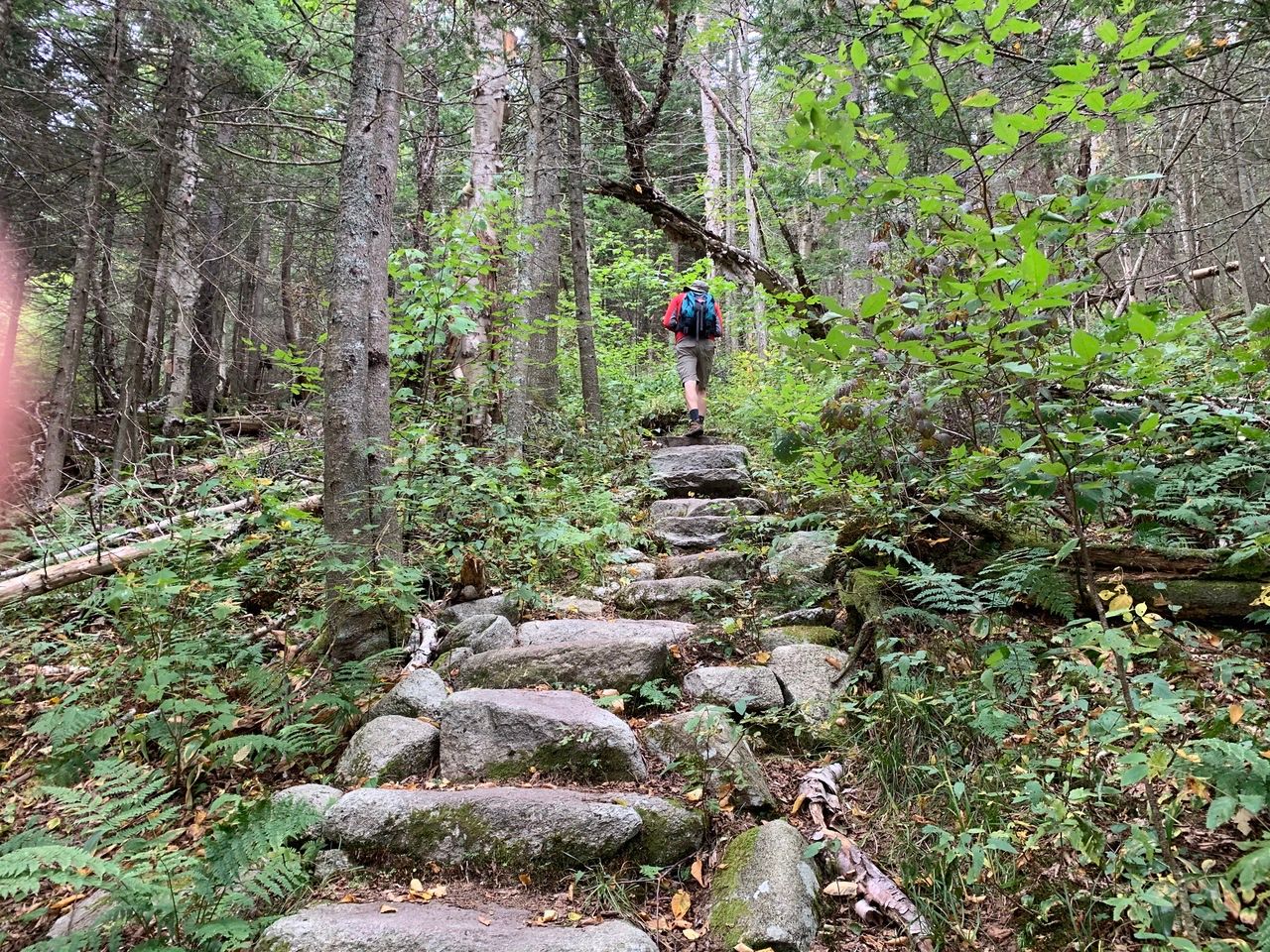 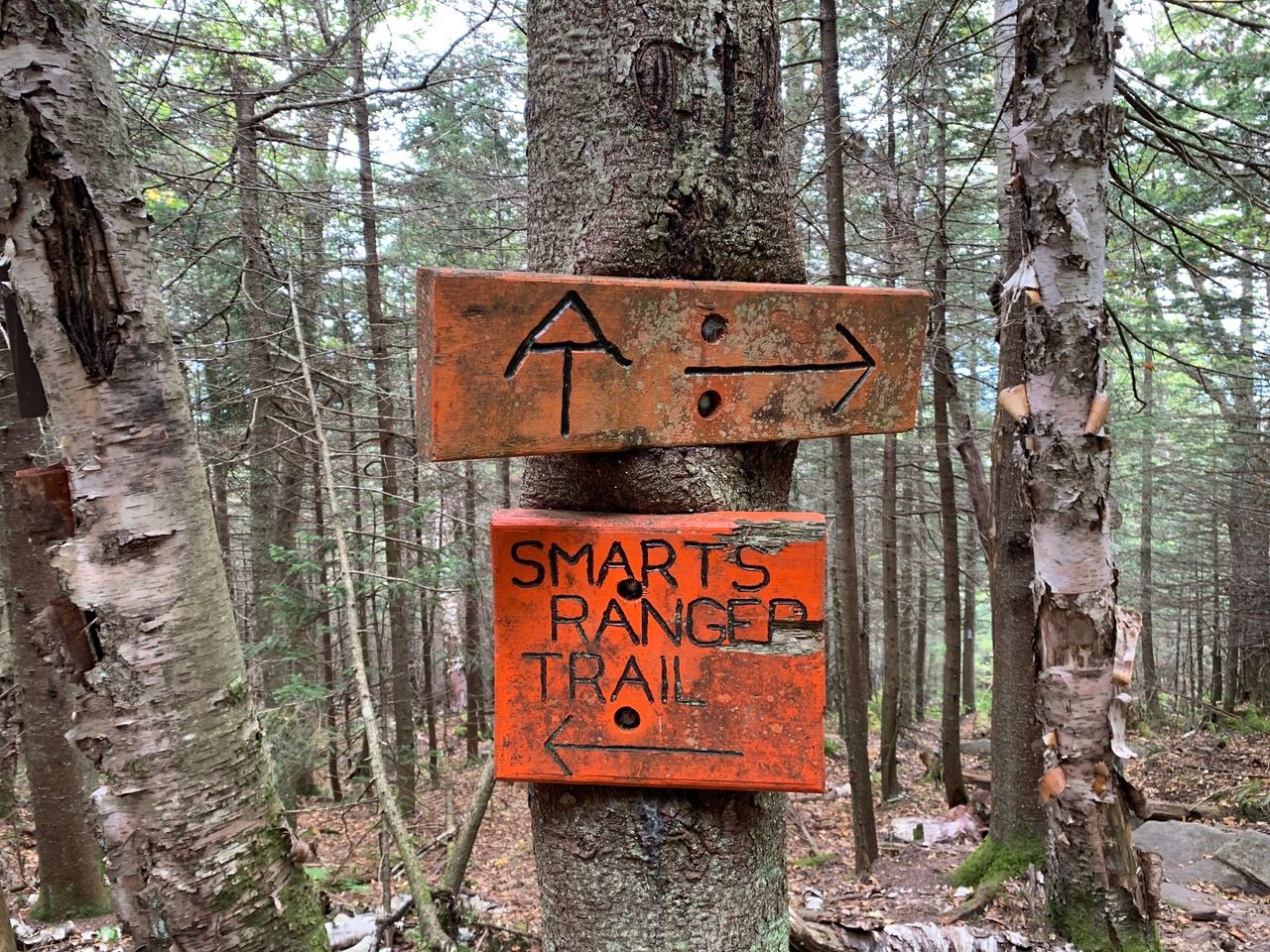 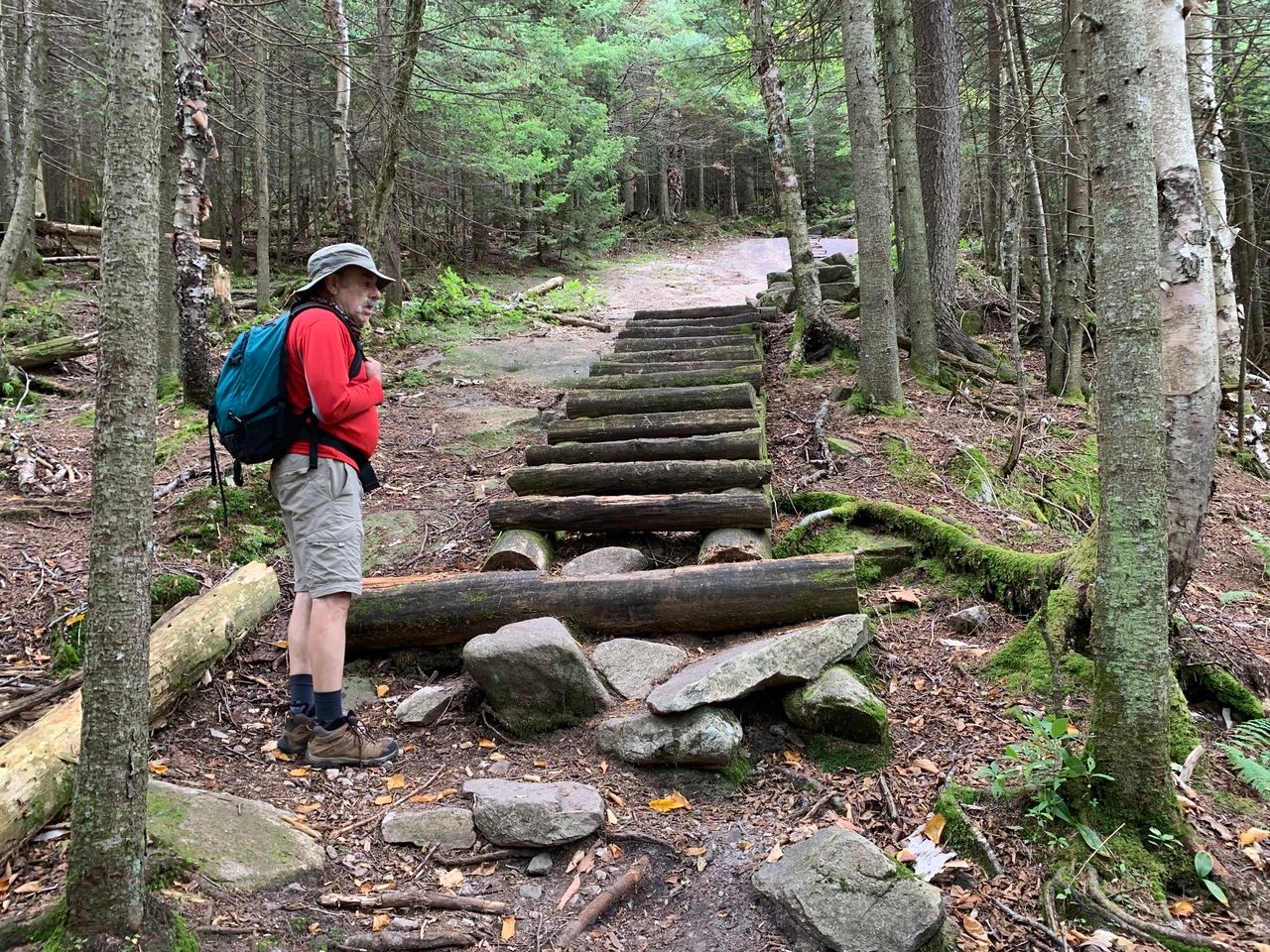 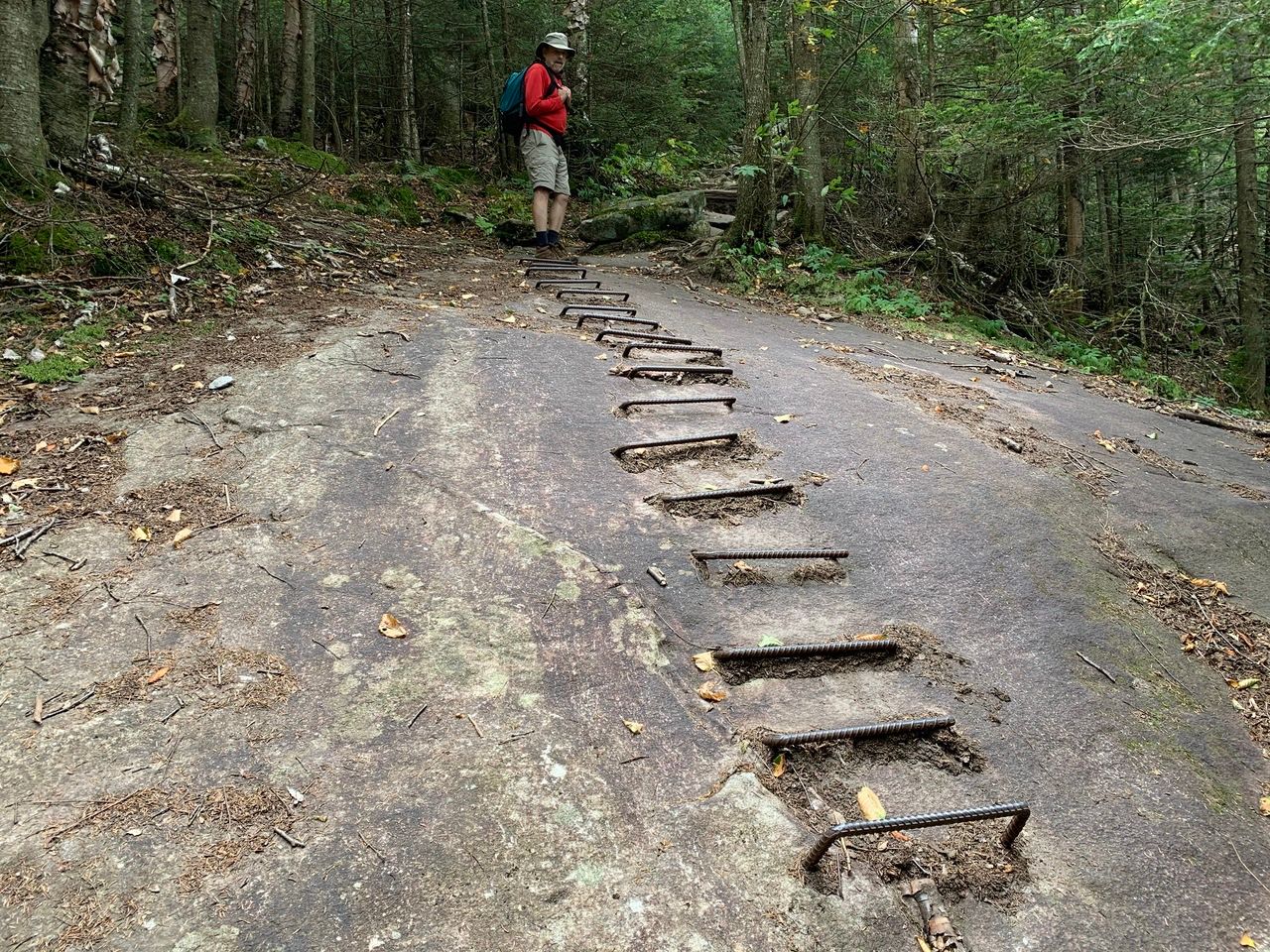 The grade eases near the top, and the fire tower is reached at 3.9 miles (elev. 3238) after about 2 hours and 40 minutes, just past an area for tent sites. There is also an old fire warden cabin that people can use on a first-come first-served basis. 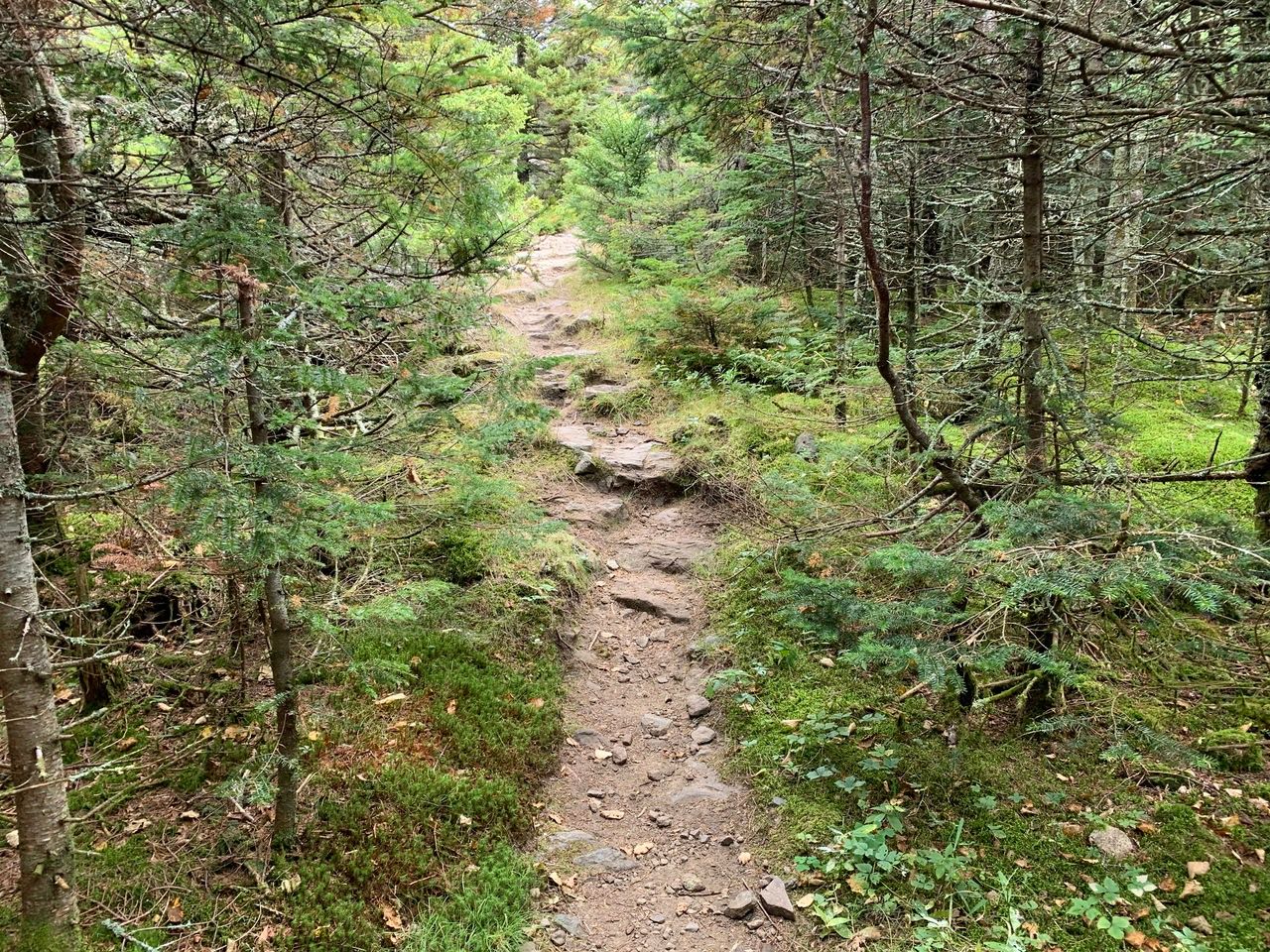 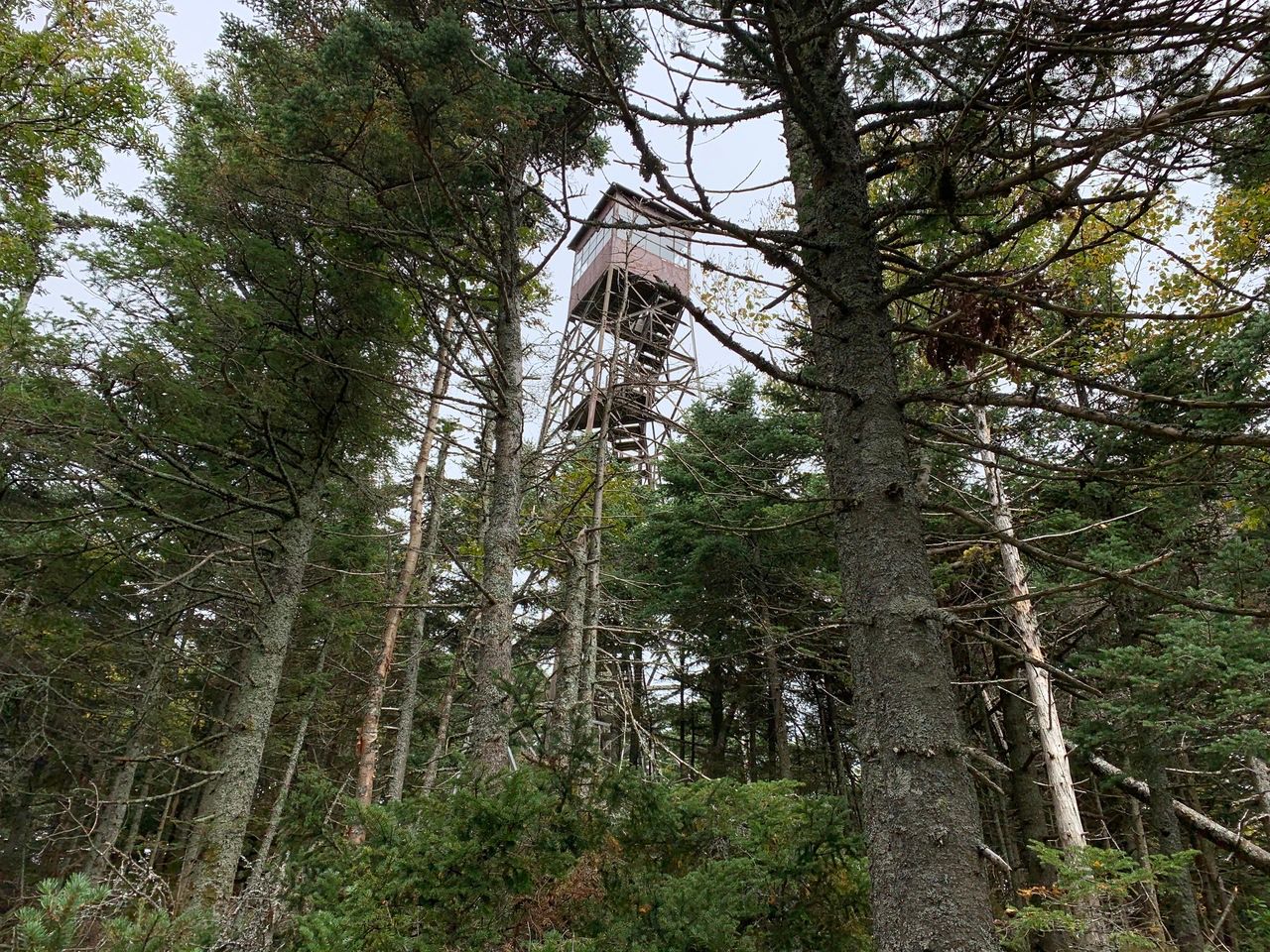 We walked another 0.3 up and back along the AT (the J trail) to the eastern knob, but the trail does not actually go to the summit.
We ate outside by the fire warden cabin on a metal bench, then climbed the fire tower for the view. It was a little scary to climb up in the fierce wind, and we took shelter in the enclosure up top, taking in the 360 view from inside. 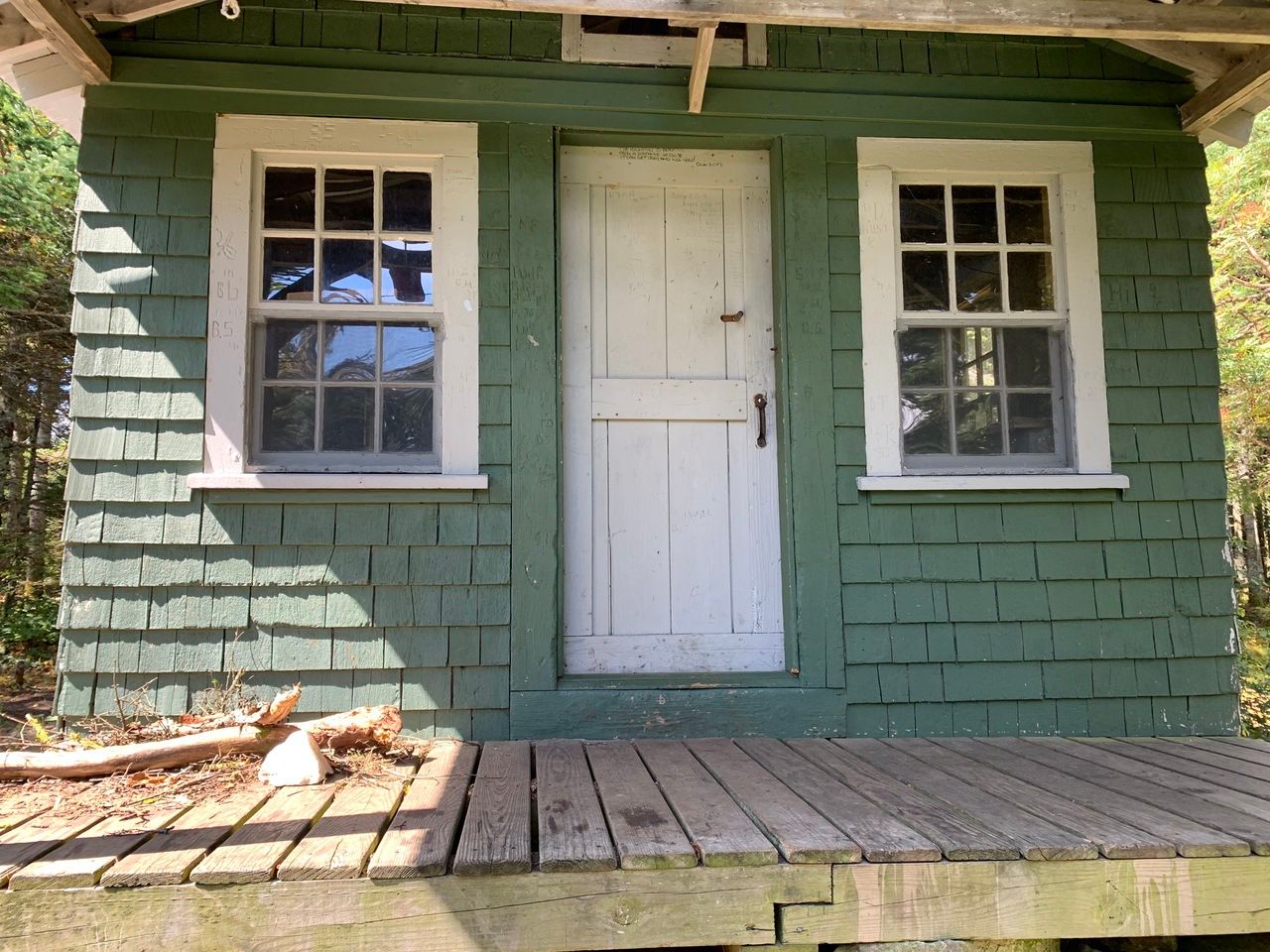 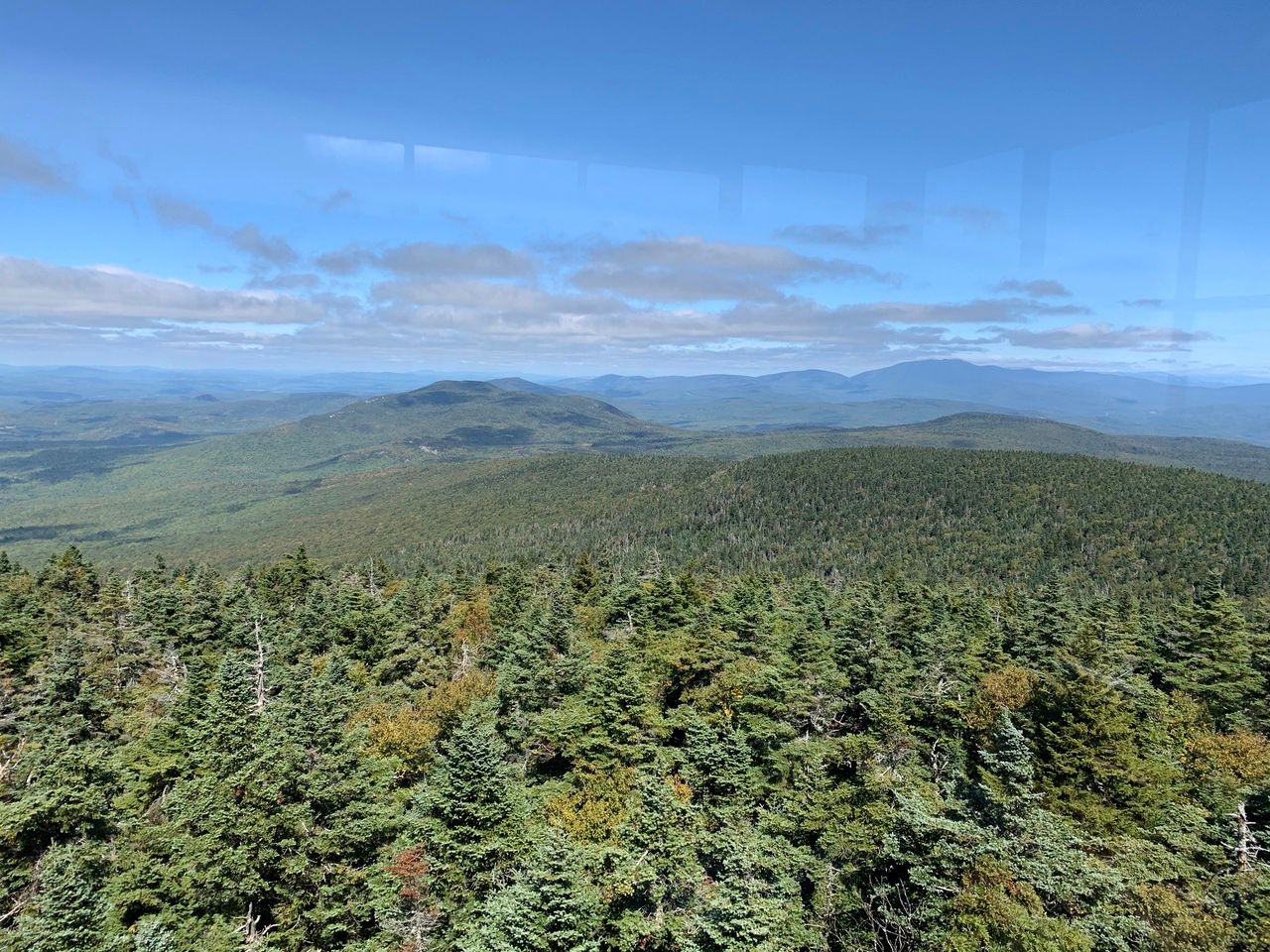 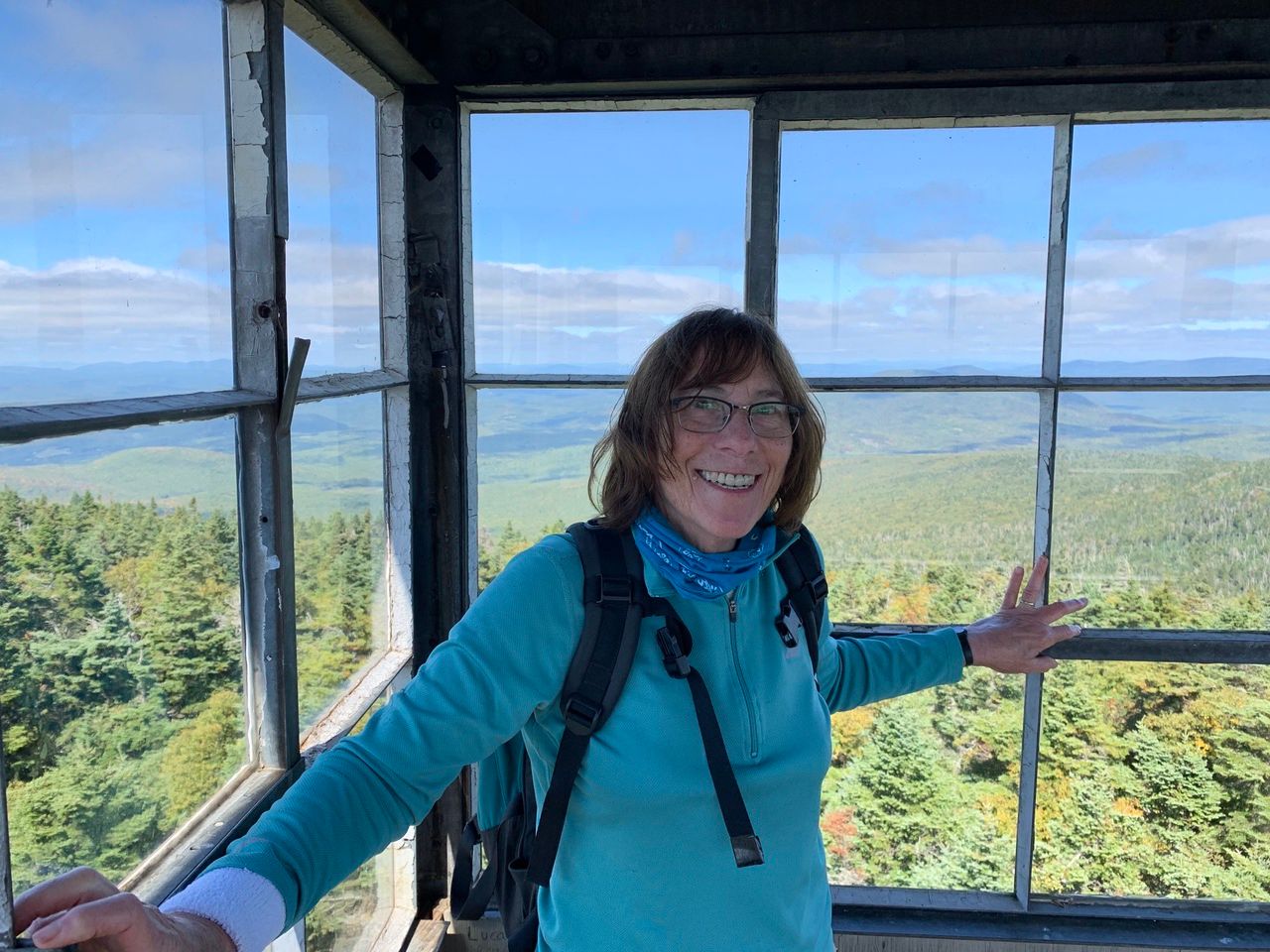 We headed back down the Ranger trail, less traveled than the AT, which we were told can be difficult when the moss-covered ledge and rocks are wet. It’s been so dry, it was not a problem. This trail, the former fire warden trail, goes below the ridge, is more gradual after the initial tricky descent on ledge and strewn rocks, and is 3.0 miles, rather than the 3.3 miles of the Lambert Ridge trail.
The former fire warden’s garage at 1.9 miles from the trailhead. 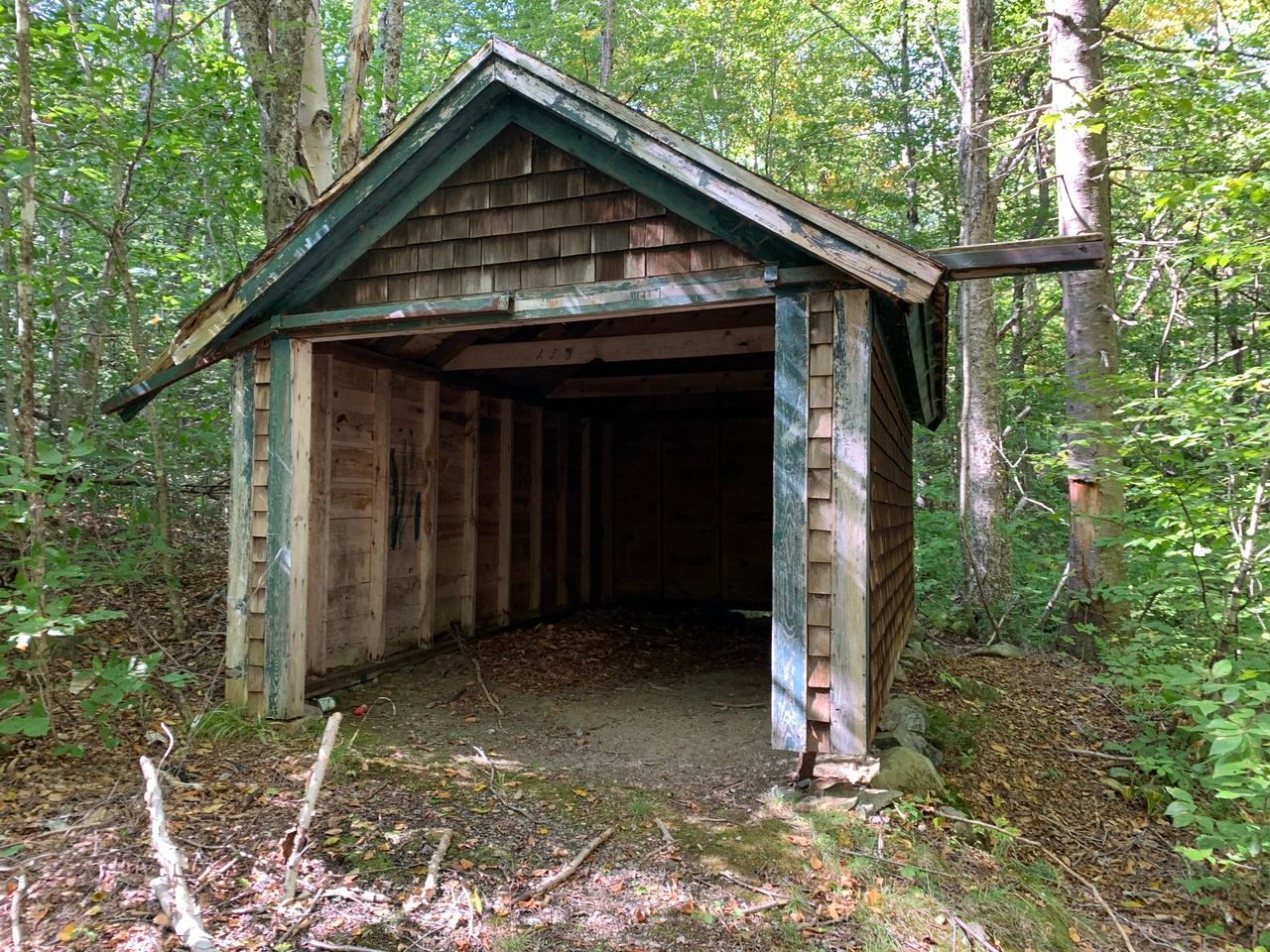 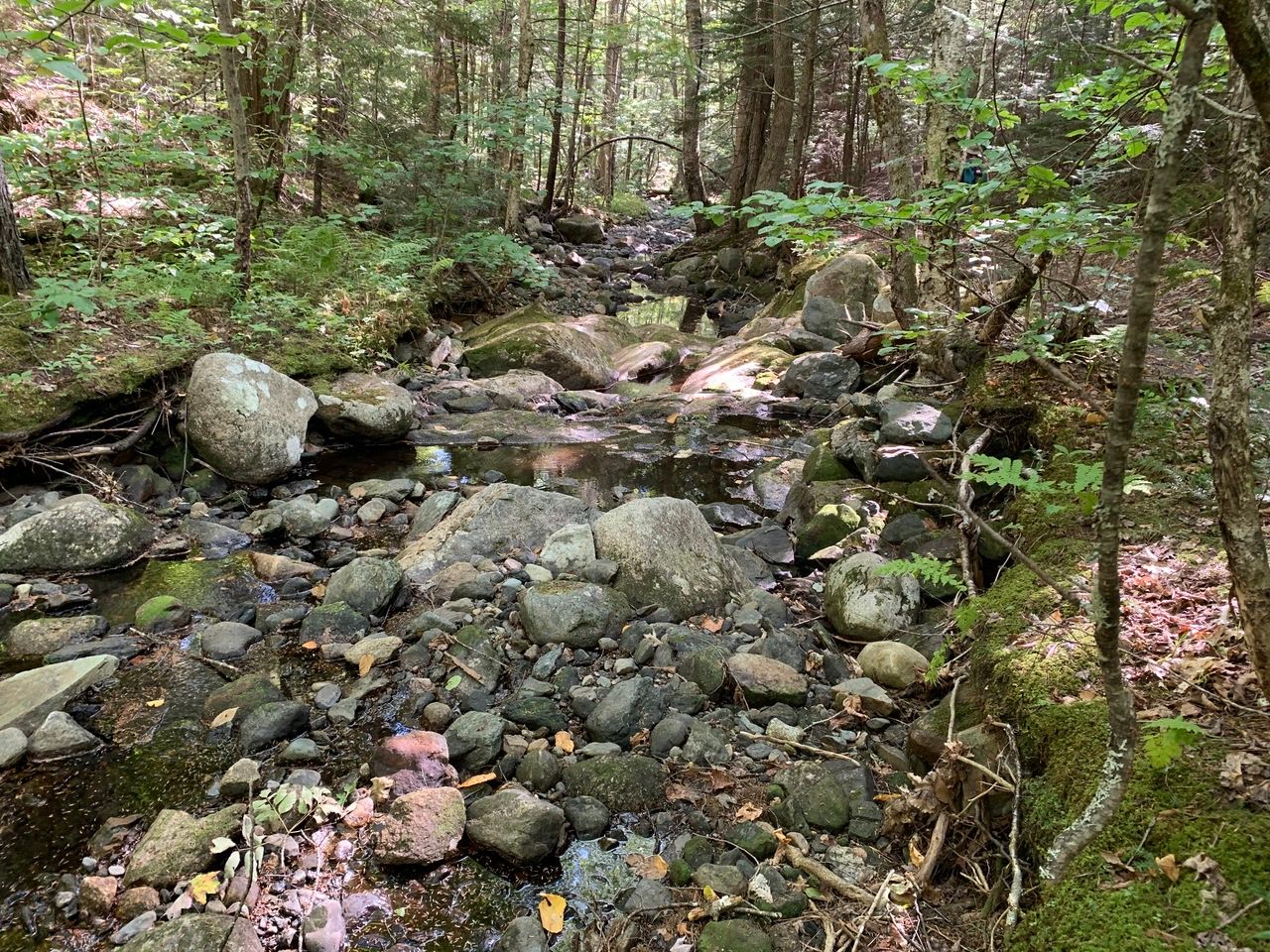 One flower we have not seen before, though it is not uncommon and is native to New England: Gentiana clausa, meadow bottle gentian. 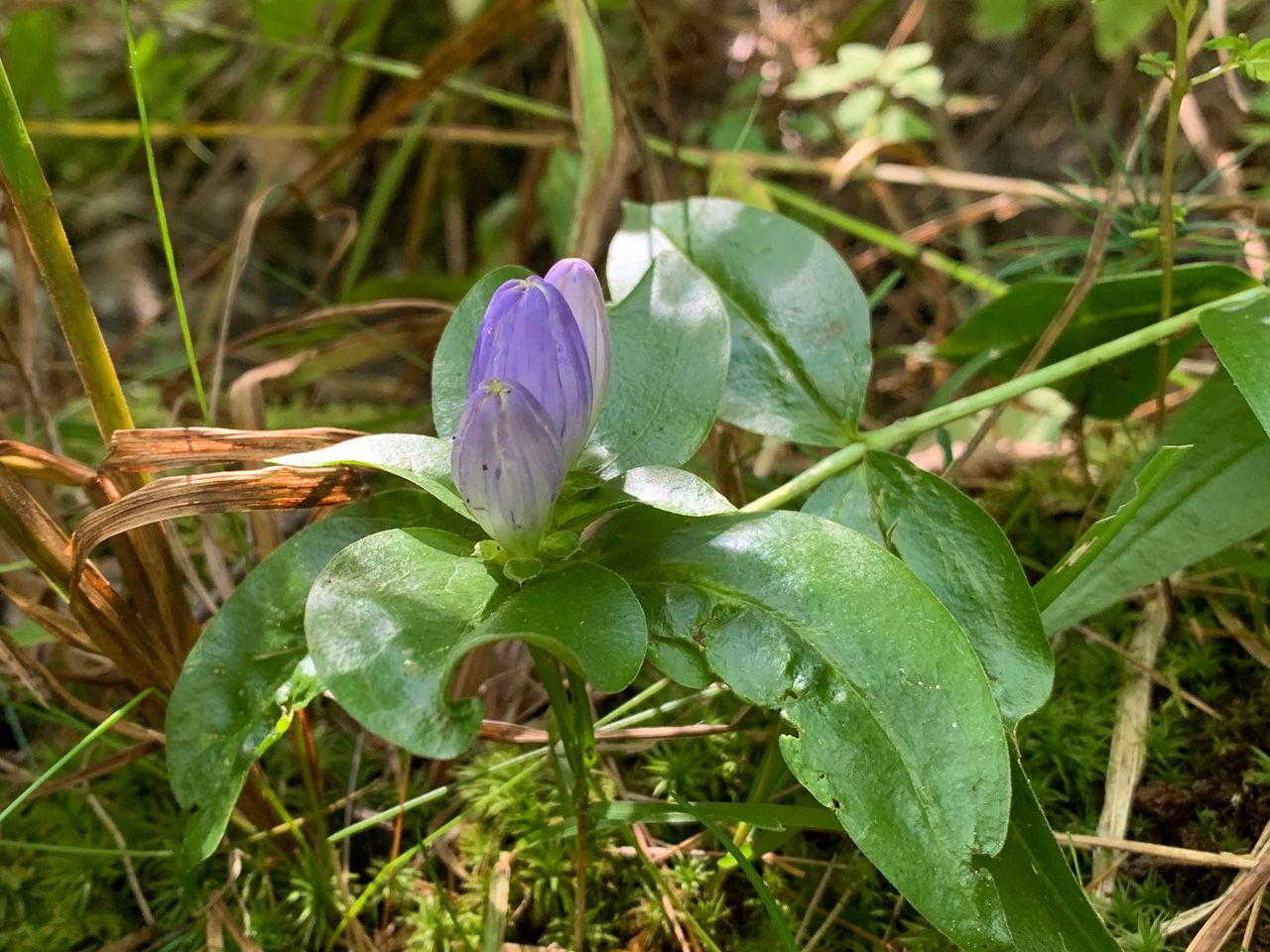 On many maps, a former AT route is shown, after the summit and before the east knob of Smarts, crossing the J trail from N/NW to S/SE. The following map has been edited to show the existing trails. The section that runs N/NW to Quinttown is shown as the Dan Doan trail and starts past the fire warden cabin. 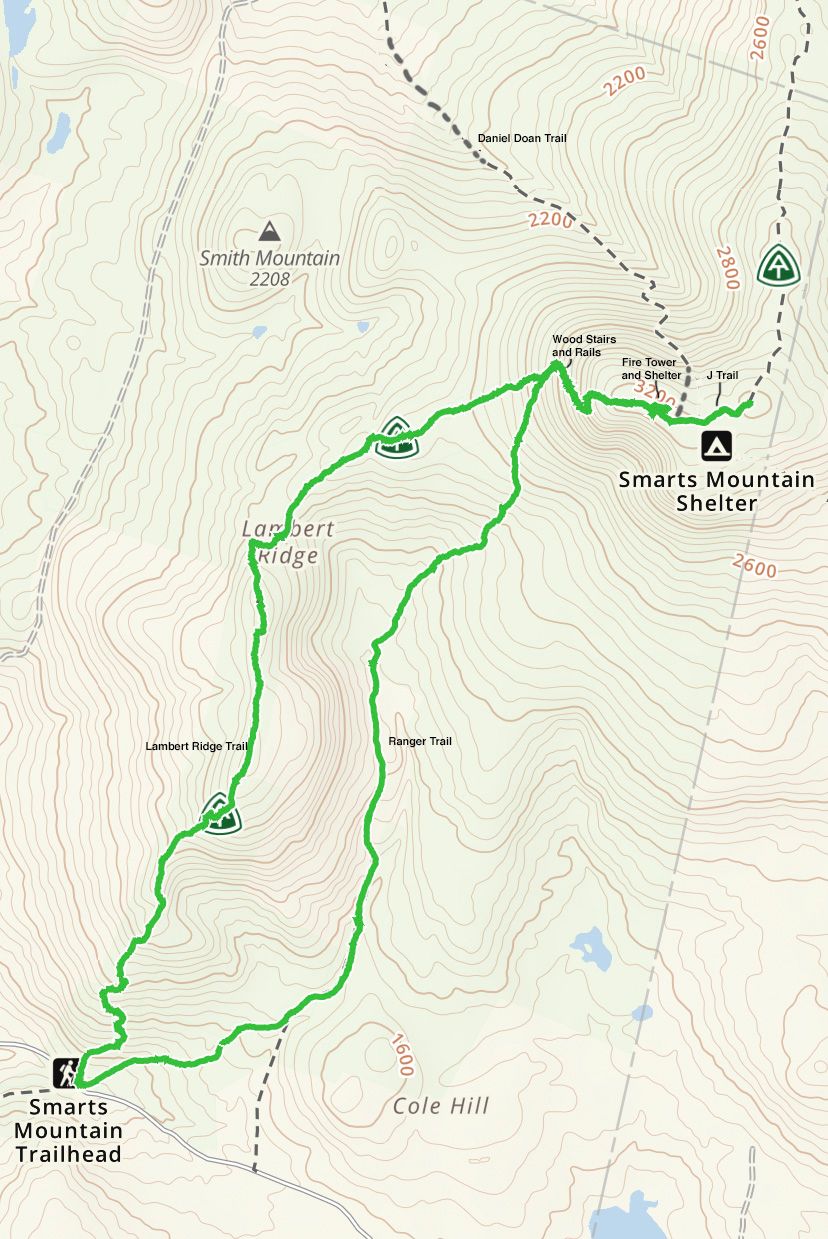 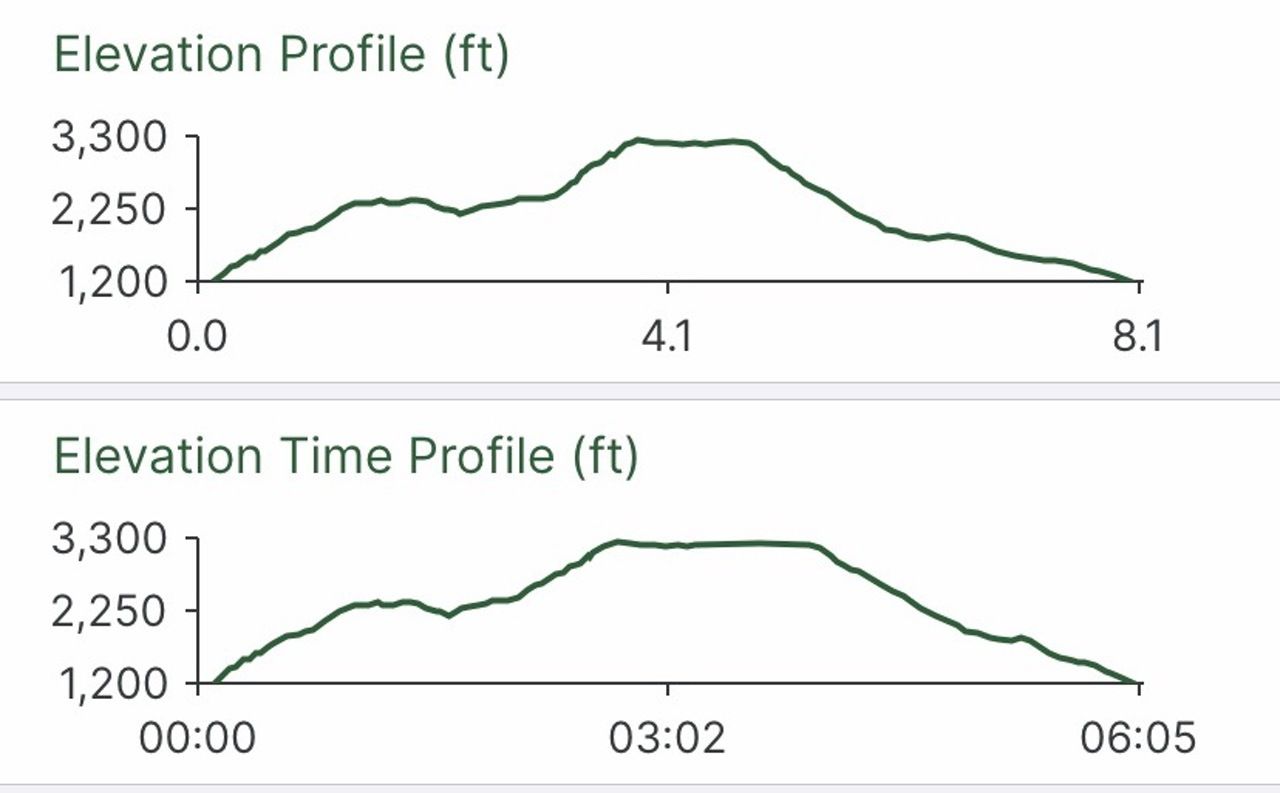 Statistics according to the Gaia app:

Published by Eileen and Larry Samberg on September 11th, 2020