The day arrived for the trip to Machu Picchu. We headed to the train station at Ollantaytambo for a 9:15 am train, which actually left around 10:30. 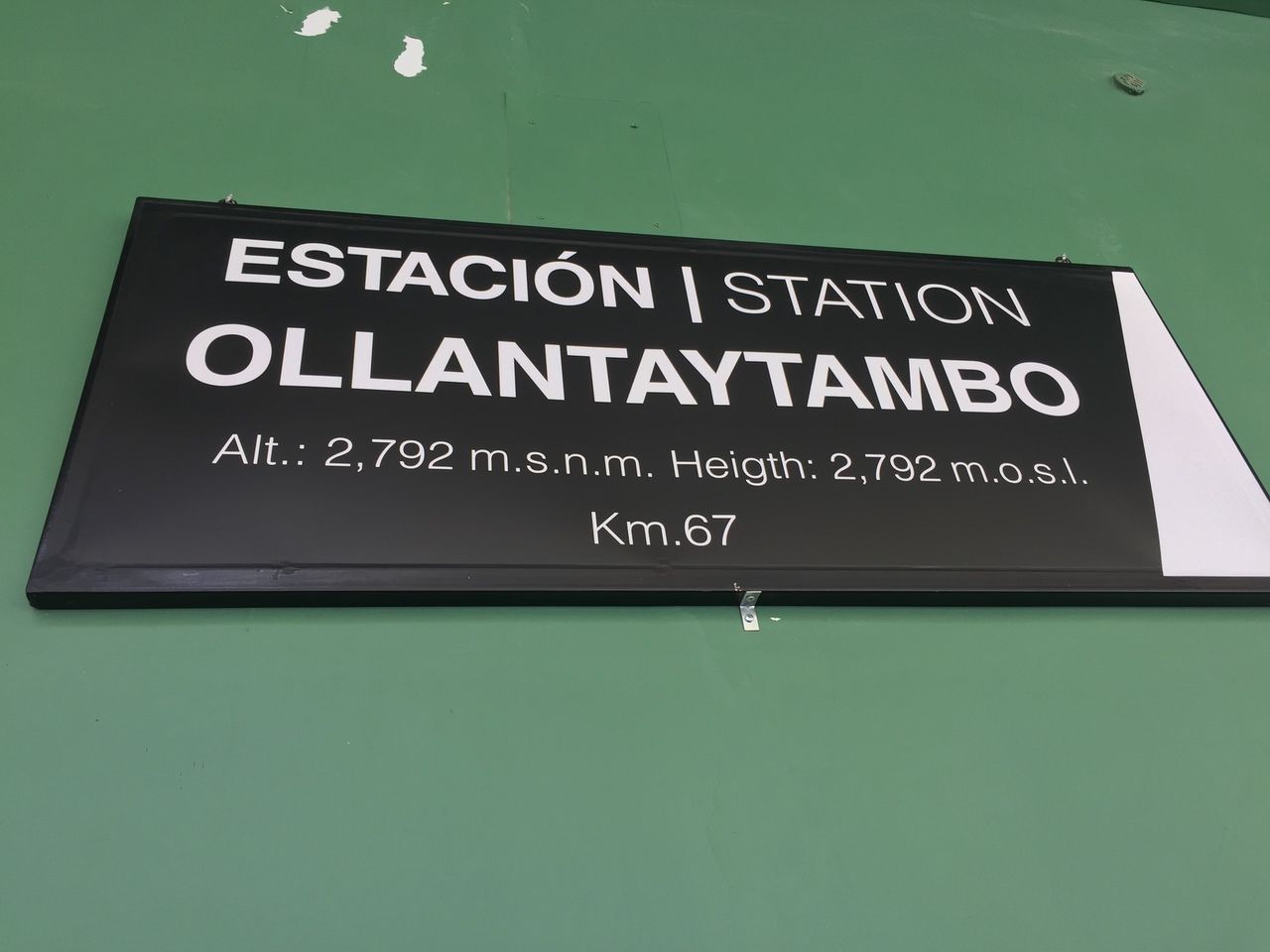 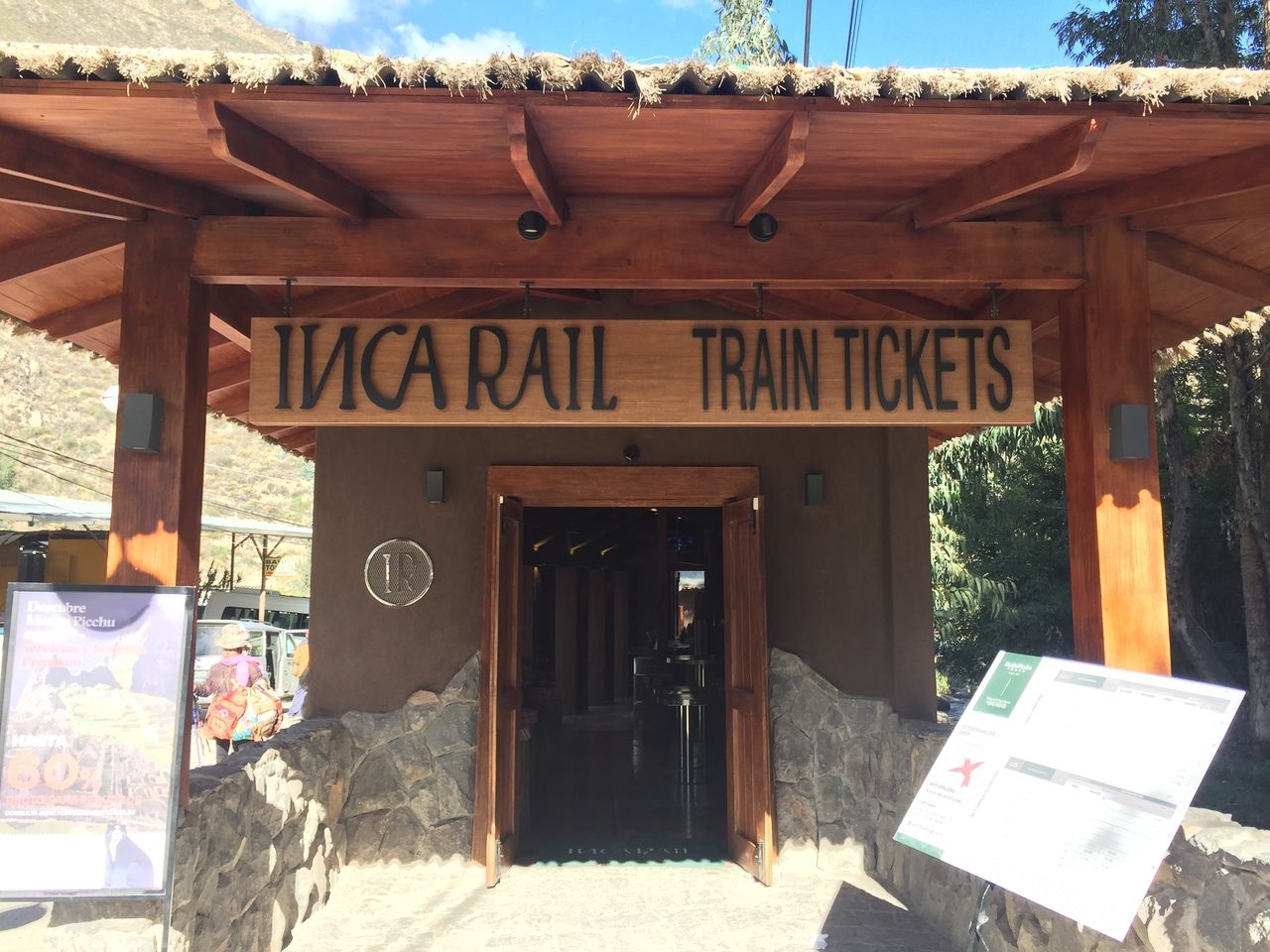 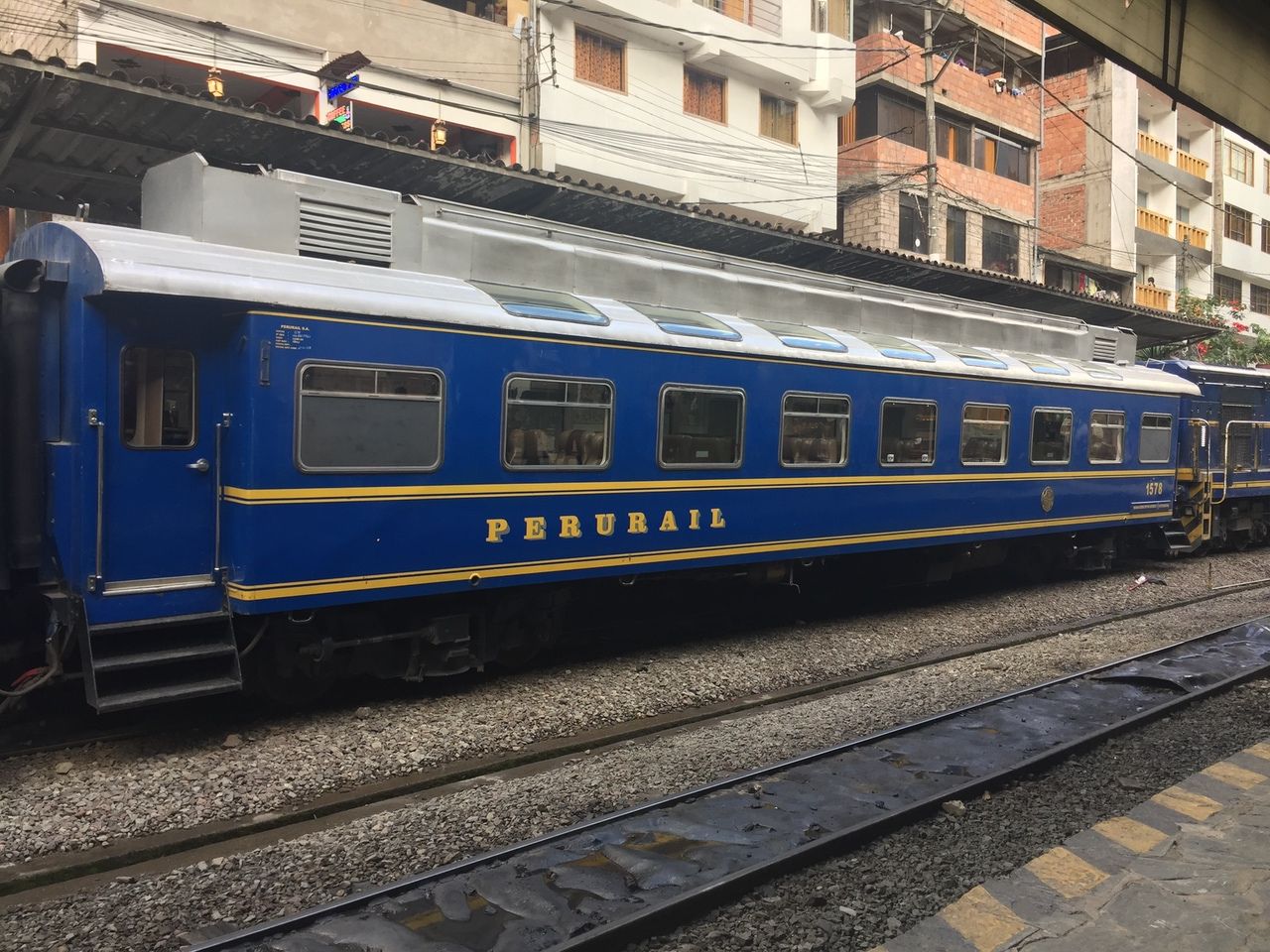 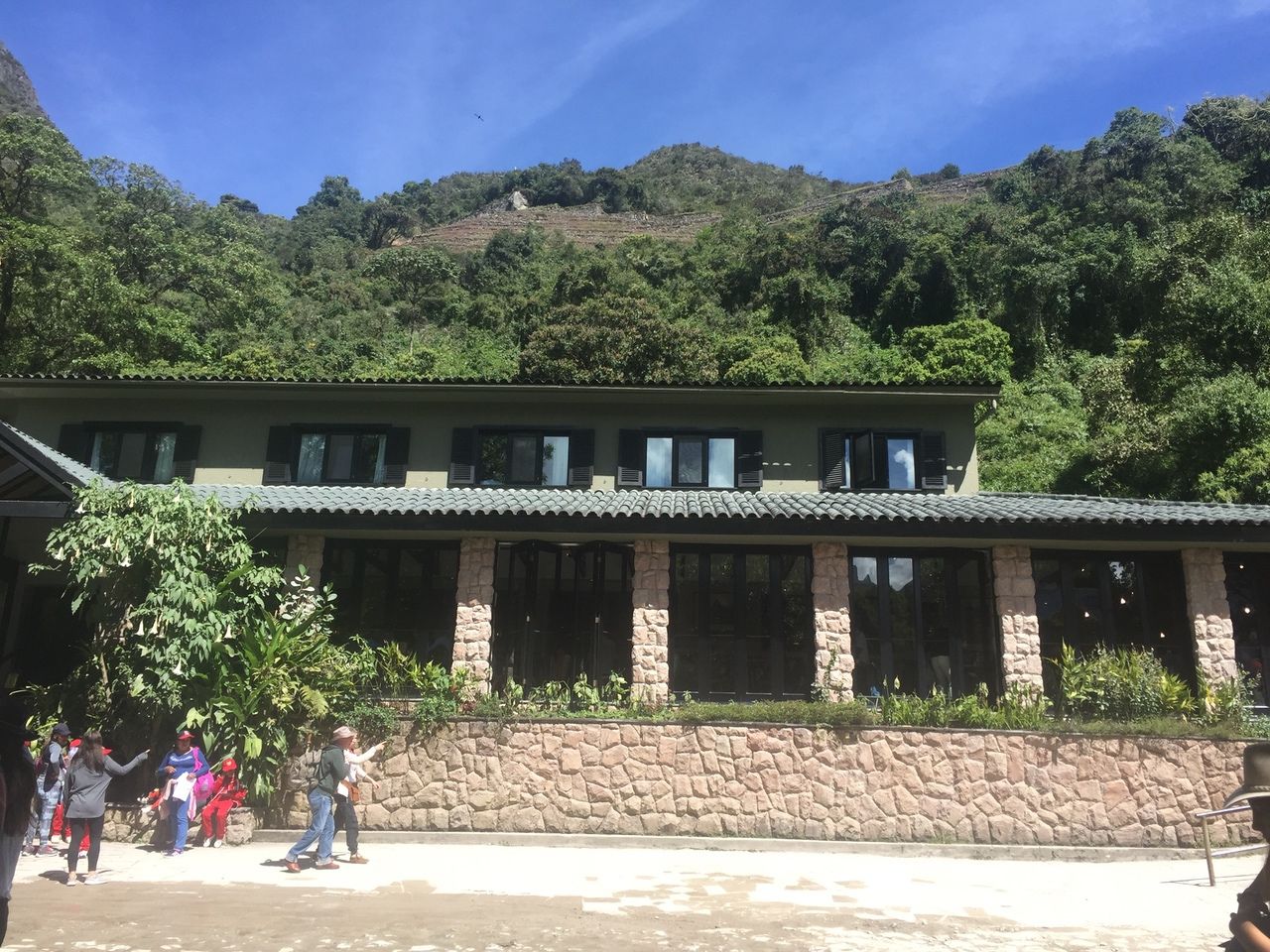 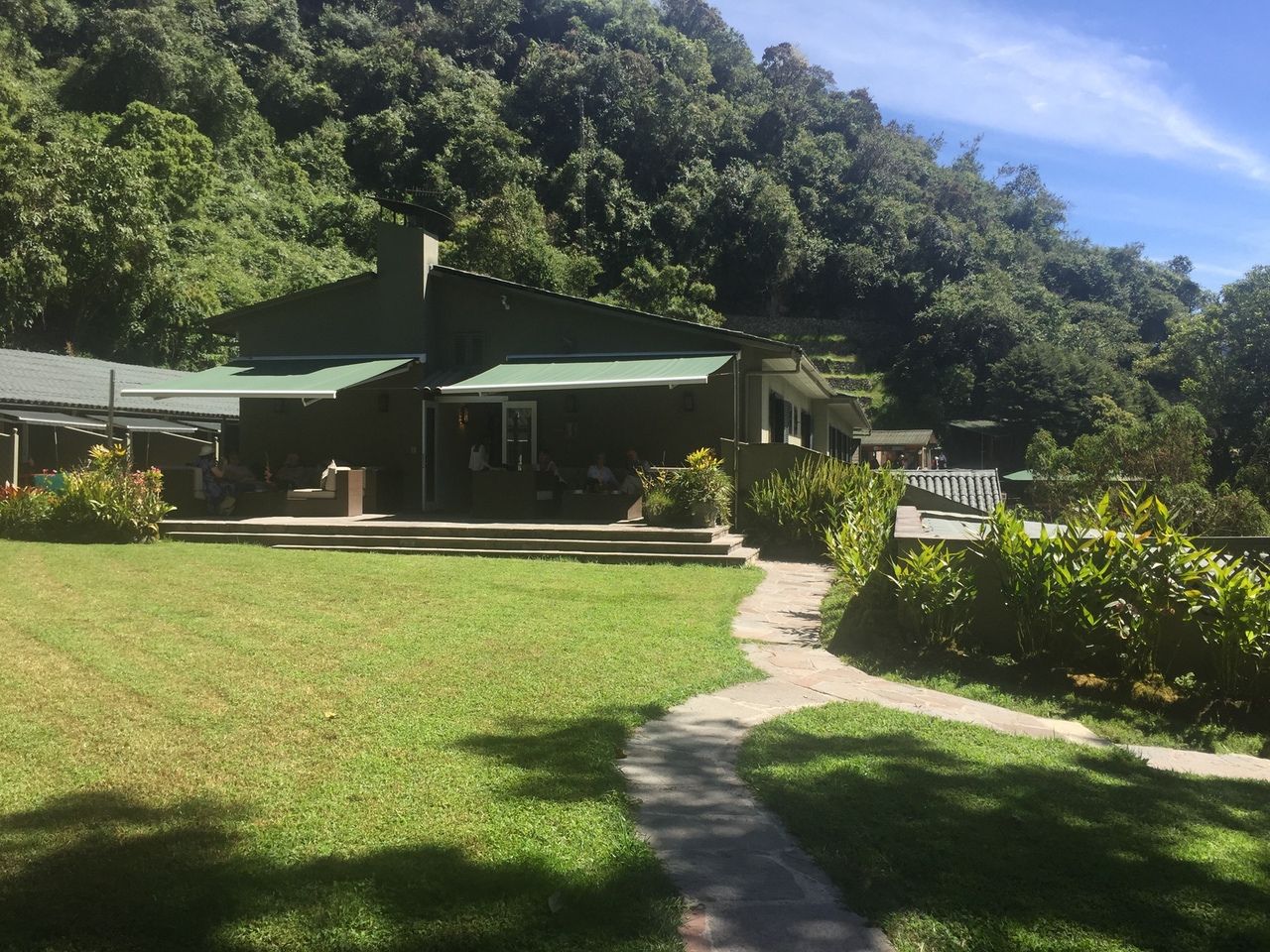 After an excellent buffet lunch in their casual dining room, we checked in and got ourselves ready for our 2:00 pm tour. Entrance time (on the hour) and number of half-day visits (2) is now regulated, and separate permits are required to hike Huayna Picchu.
Naming hint: When Hiram Bingham discovered the fortress in 1911, he asked the locals what it was called. They pointed to the big mountain behind (southwest) the site and said "Machu Picchu" or "old mountain/peak". So he called the fortress Machu Picchu and its real name is likely lost forever. The large pointy peak at the far end (northeast) of the complex (the one in all of the pictures) is called Huayna Picchu or "young mountain".
This 15th century Inca complex sits at about 8,000 feet on a narrow ridge top above the Rio Urubamba. Recent theories suggest that it was the royal estate design by Pachacuti, the great Inca Emperor. The walls have stone fitted to stone, with no mortar in between. To make it habitable, mountain water was channeled through stone canals, and terraces of retaining walls were built. Archaeologists still rely heavily on speculation as to what we are looking at, and it’s unknown why or when exactly it was abandoned, maybe even before the Spanish conquest. 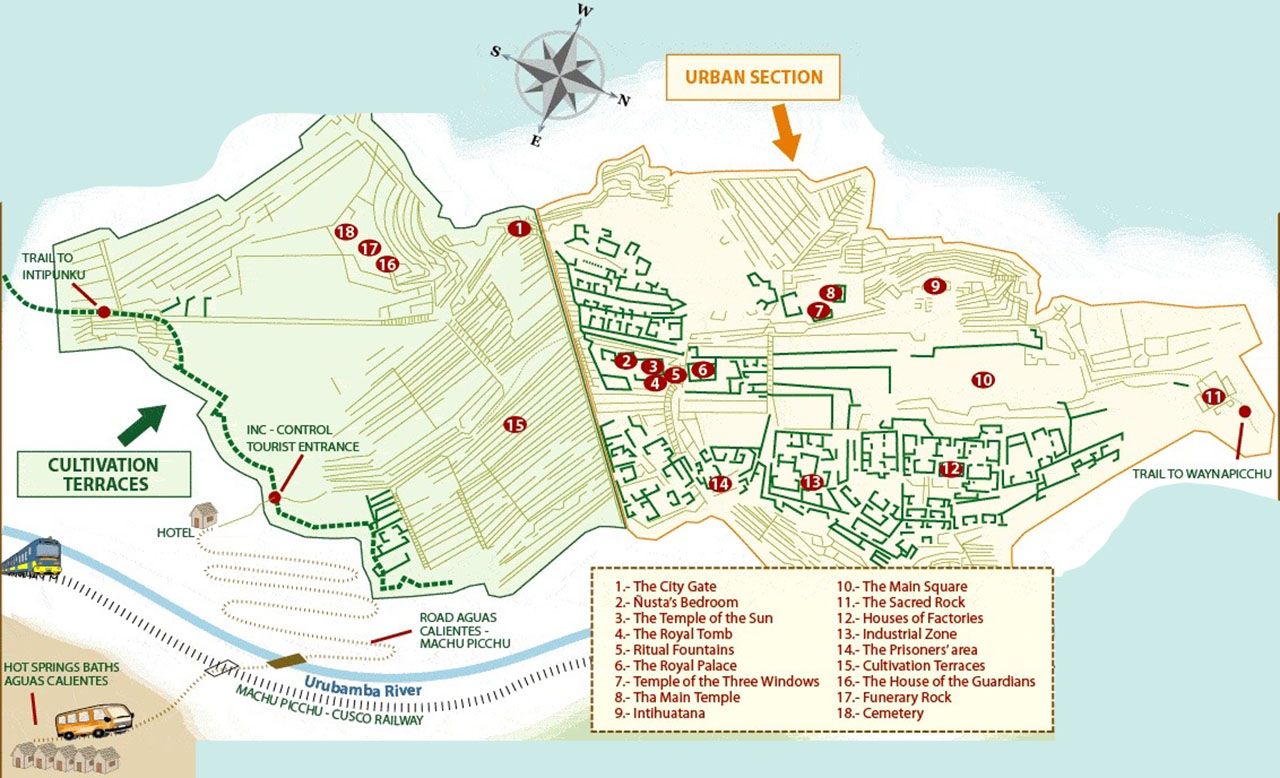 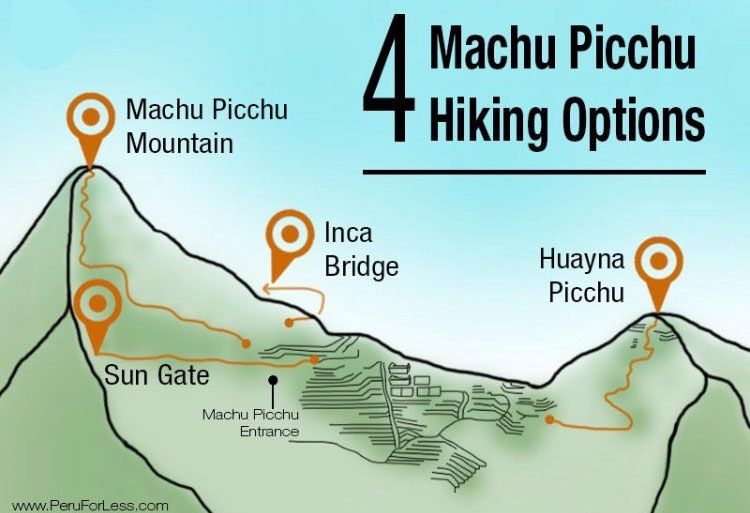 Starting on Circuit 1, we walked uphill on a zigzag of rock steps, rising above the Principal Plaza, the large expanse of lawn shown in all the classic pictures, stopping to take pictures at a number of flat terraces, including a group picture. Some of the group was moving pretty slowly, and at the high point, we went down to the plaza of the Temple of the Three Windows. Larry then went on ahead, walking down to alongside the Principal Plaza, doing a u-turn at the back, and exiting on the other side of the Plaza to the bar for a beer.
It’s impossible not to include pictures at different vantage points. 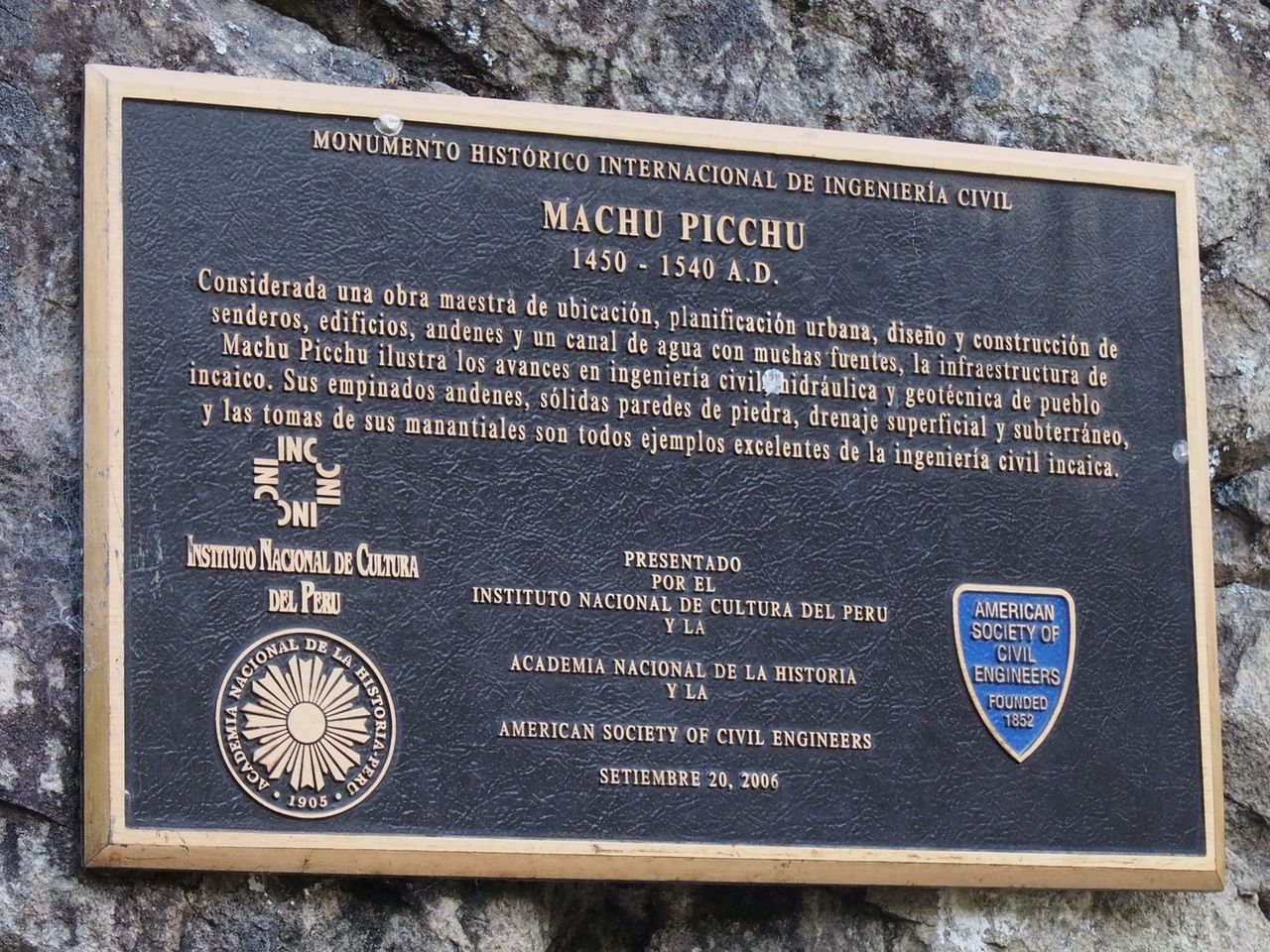 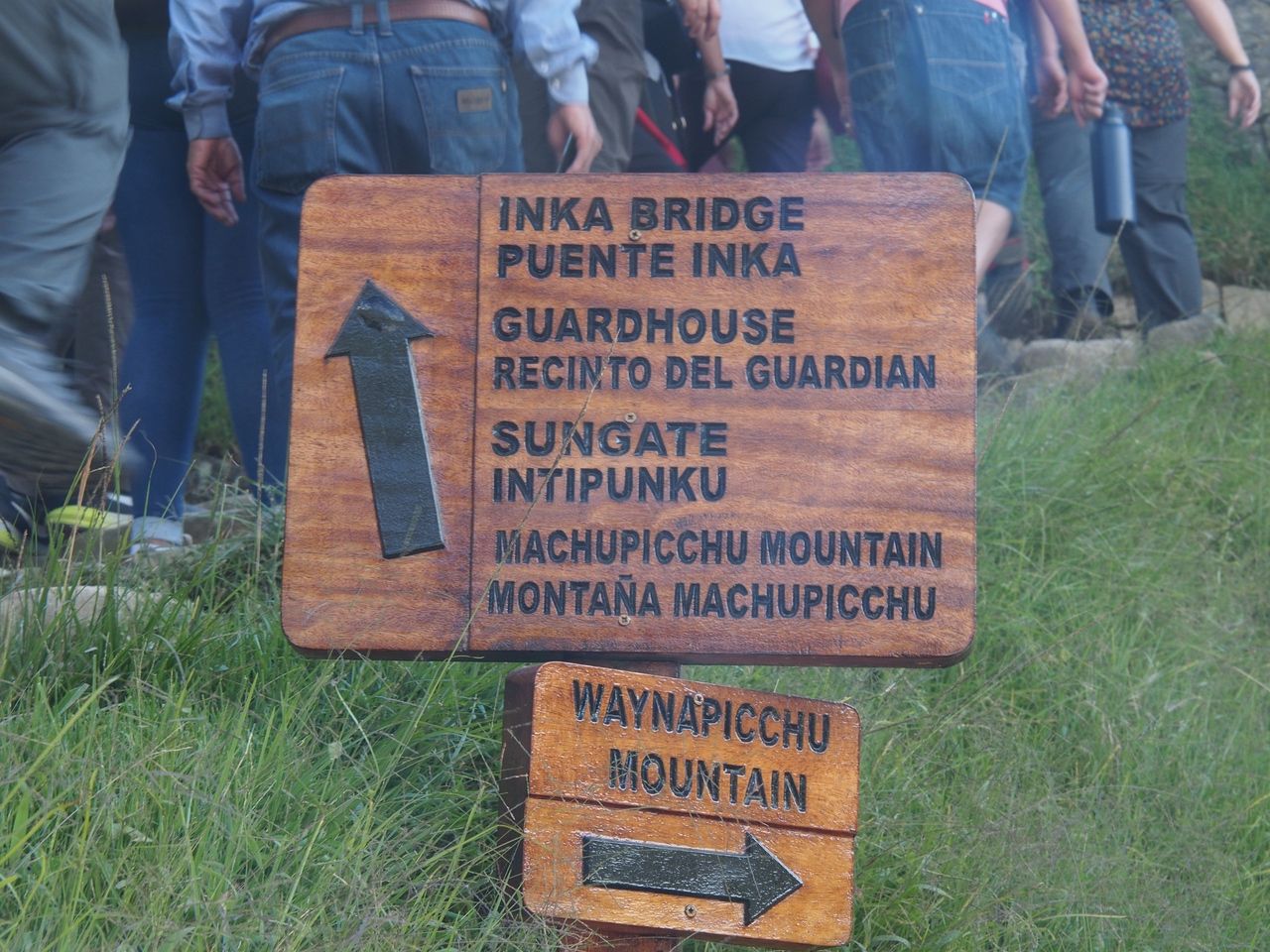 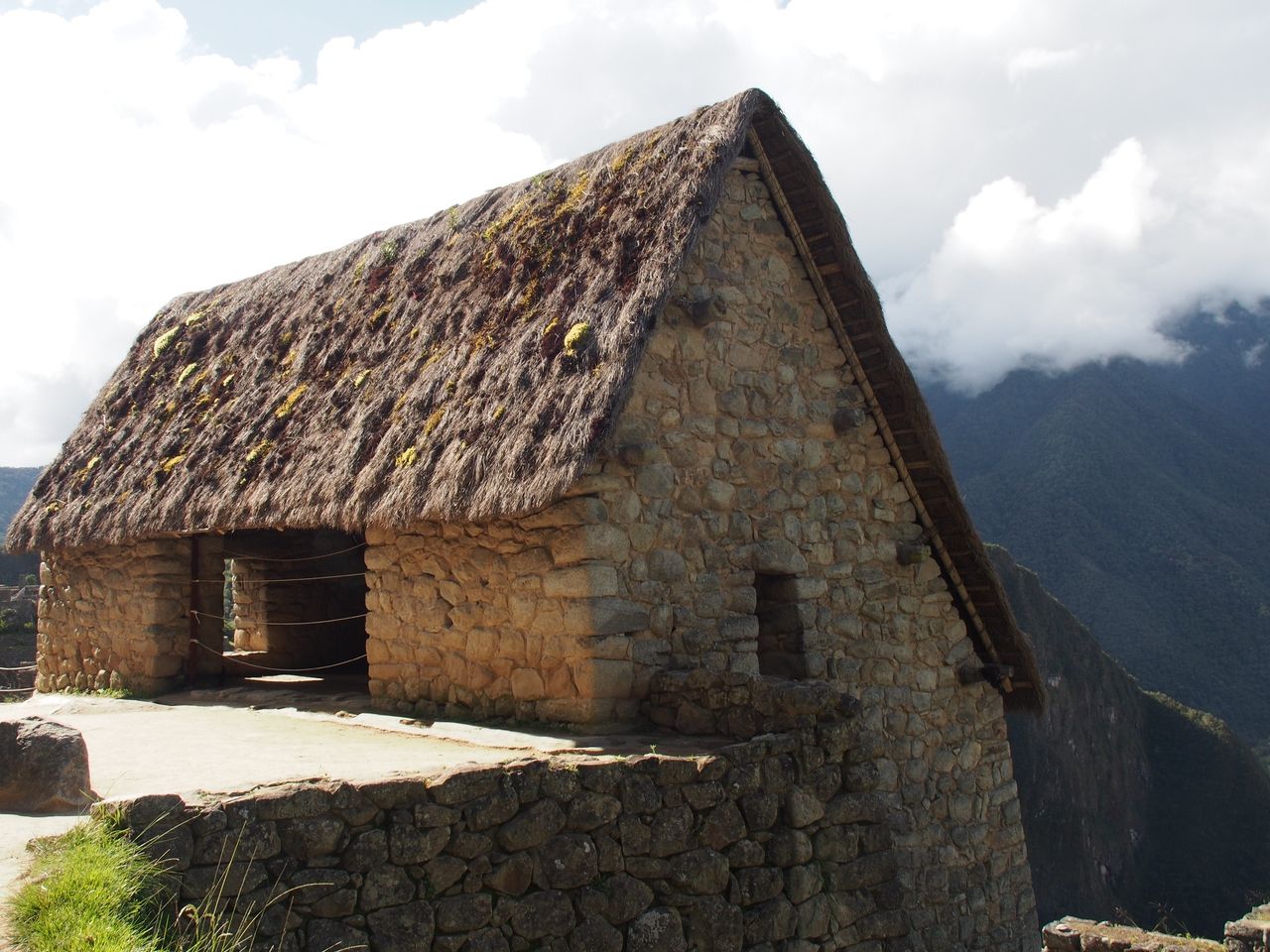 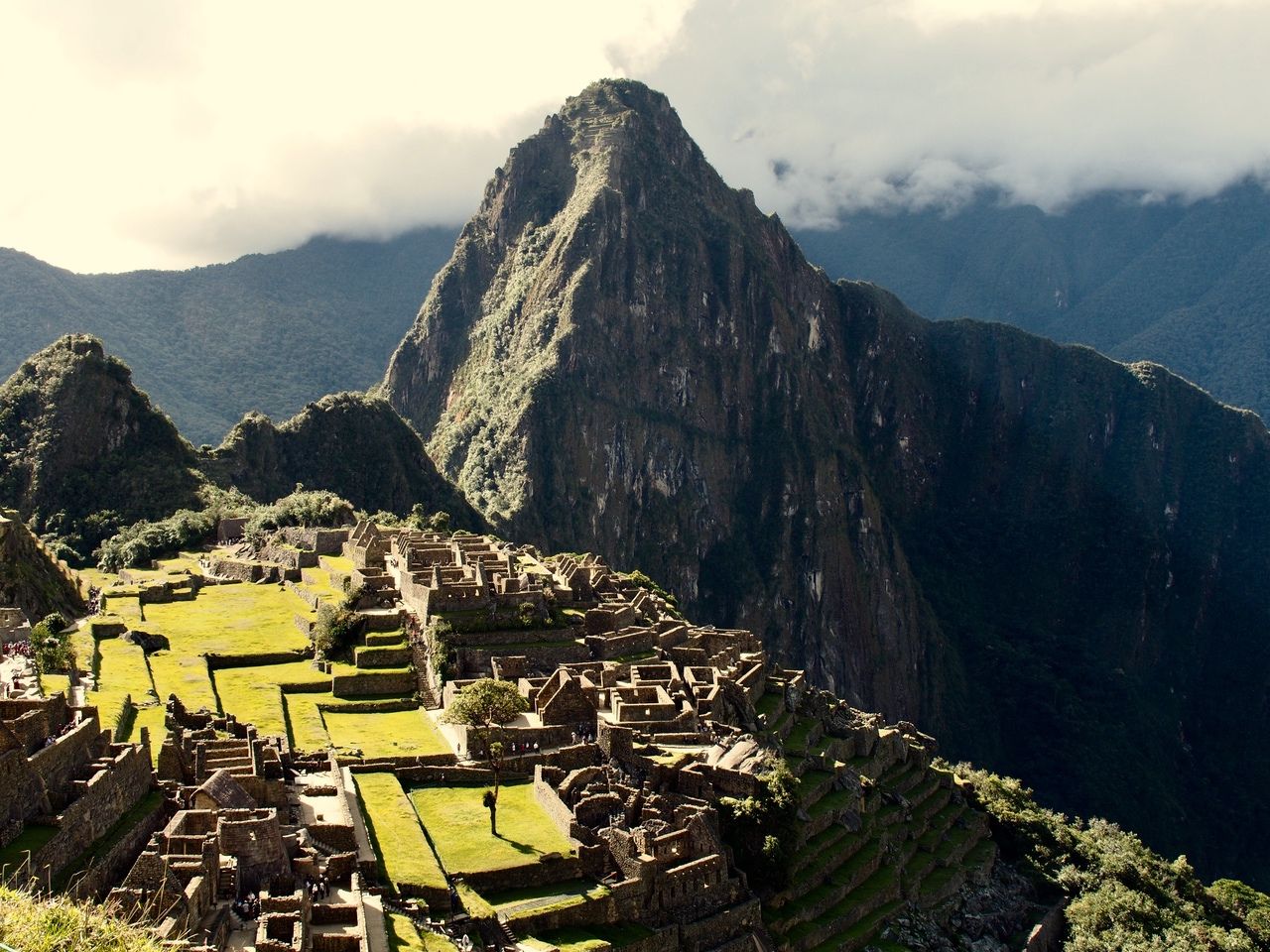 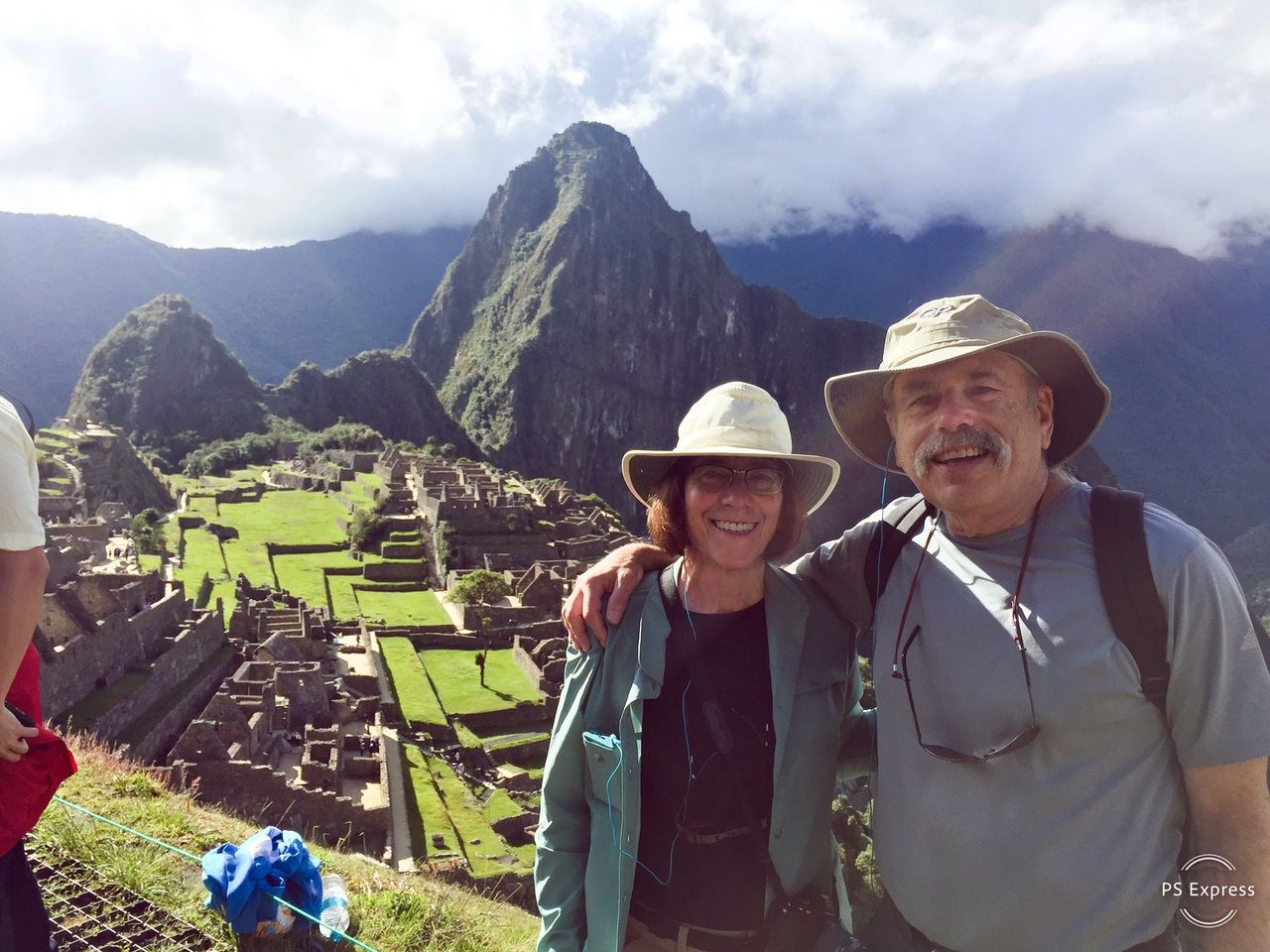 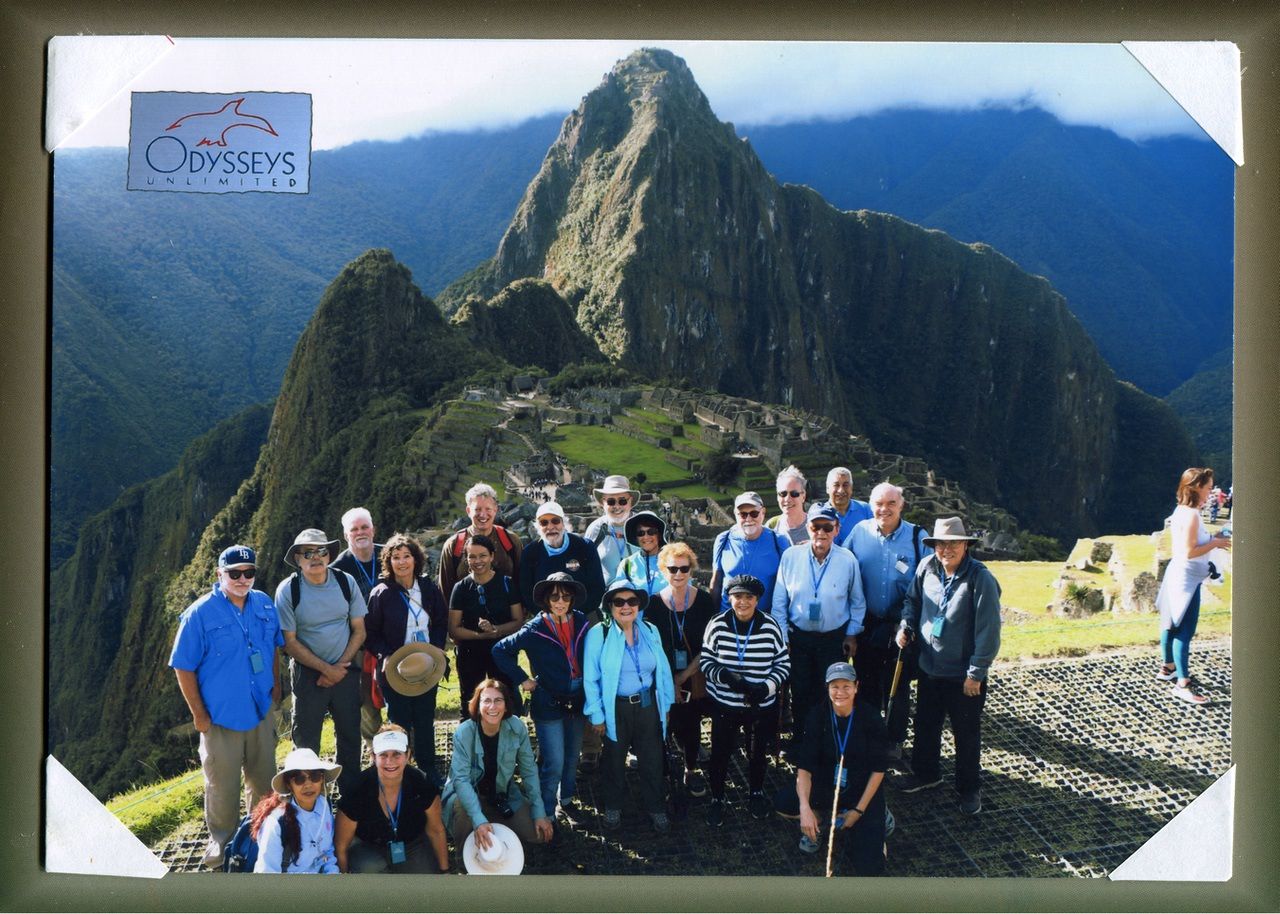 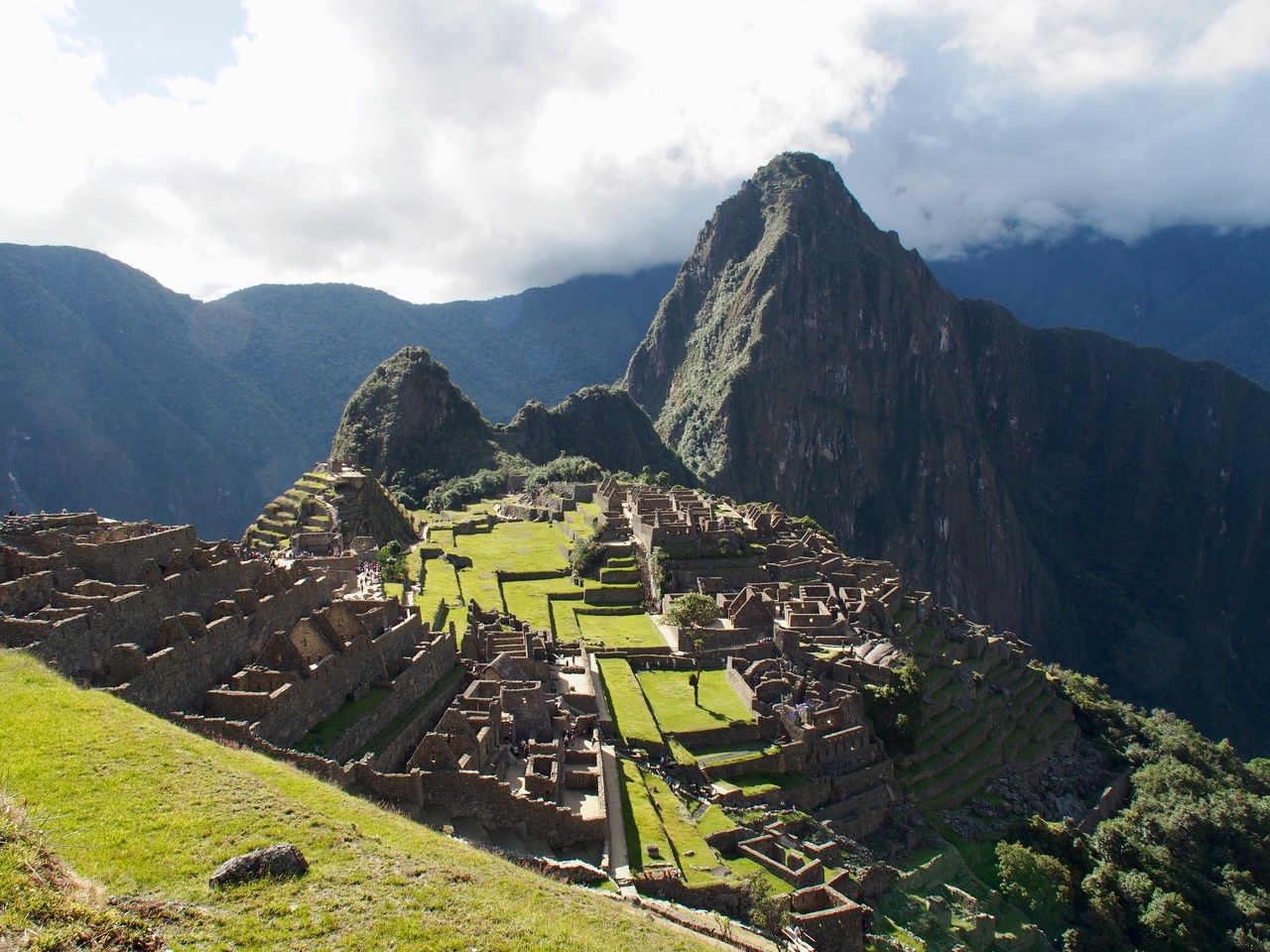 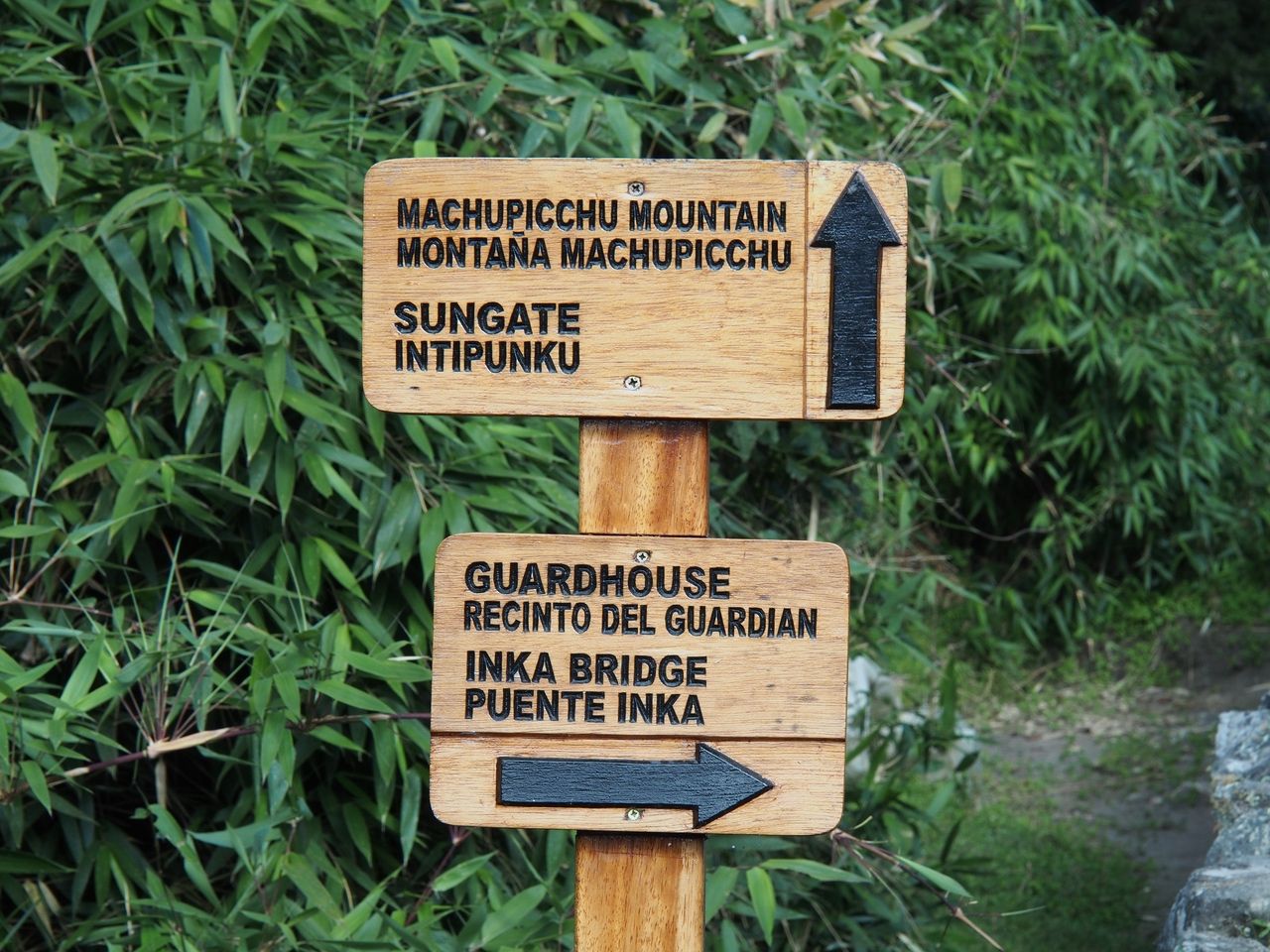 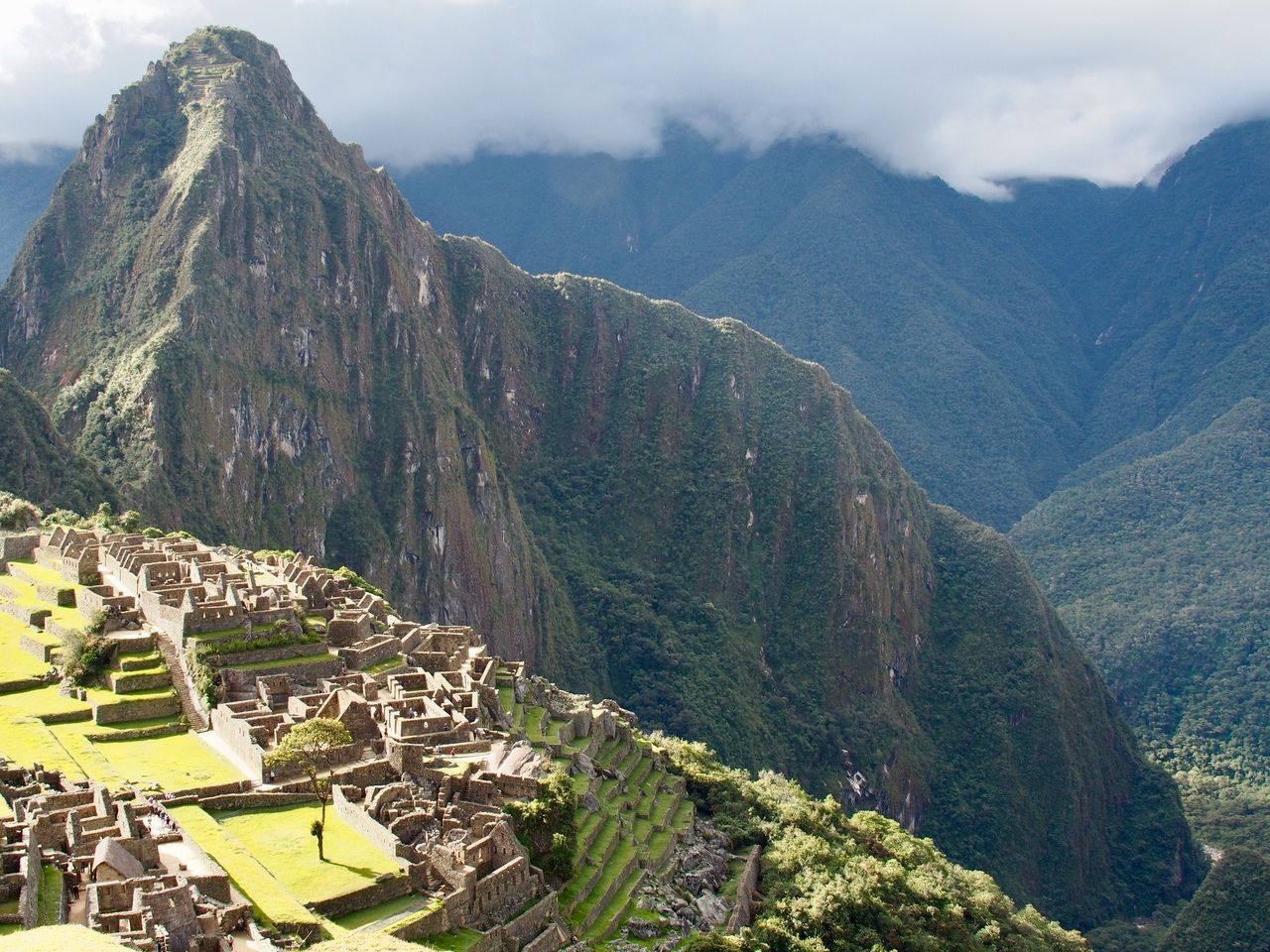 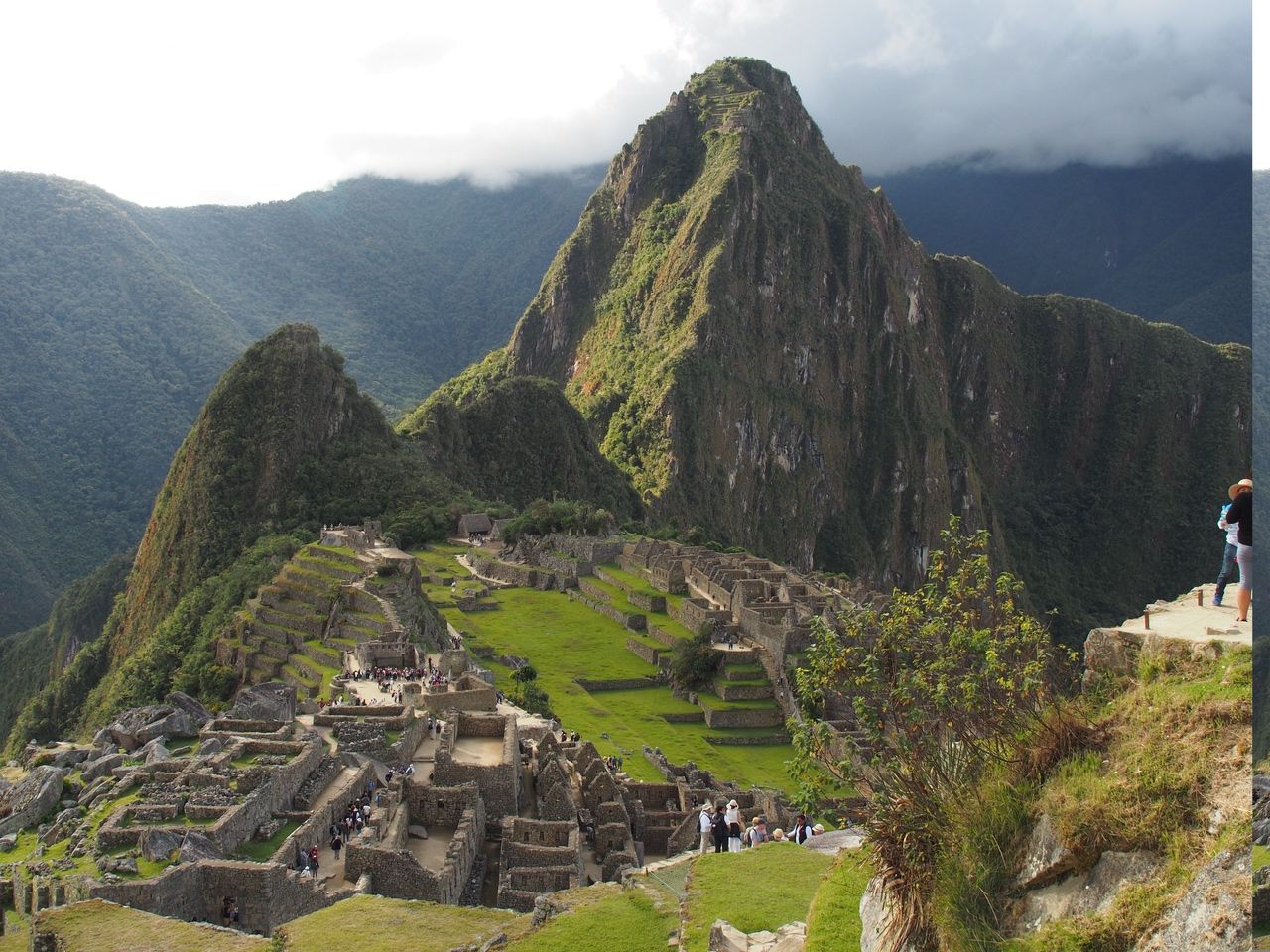 Intihuatana top left and the Plaza with the Temple of the Three Windows bottom center. 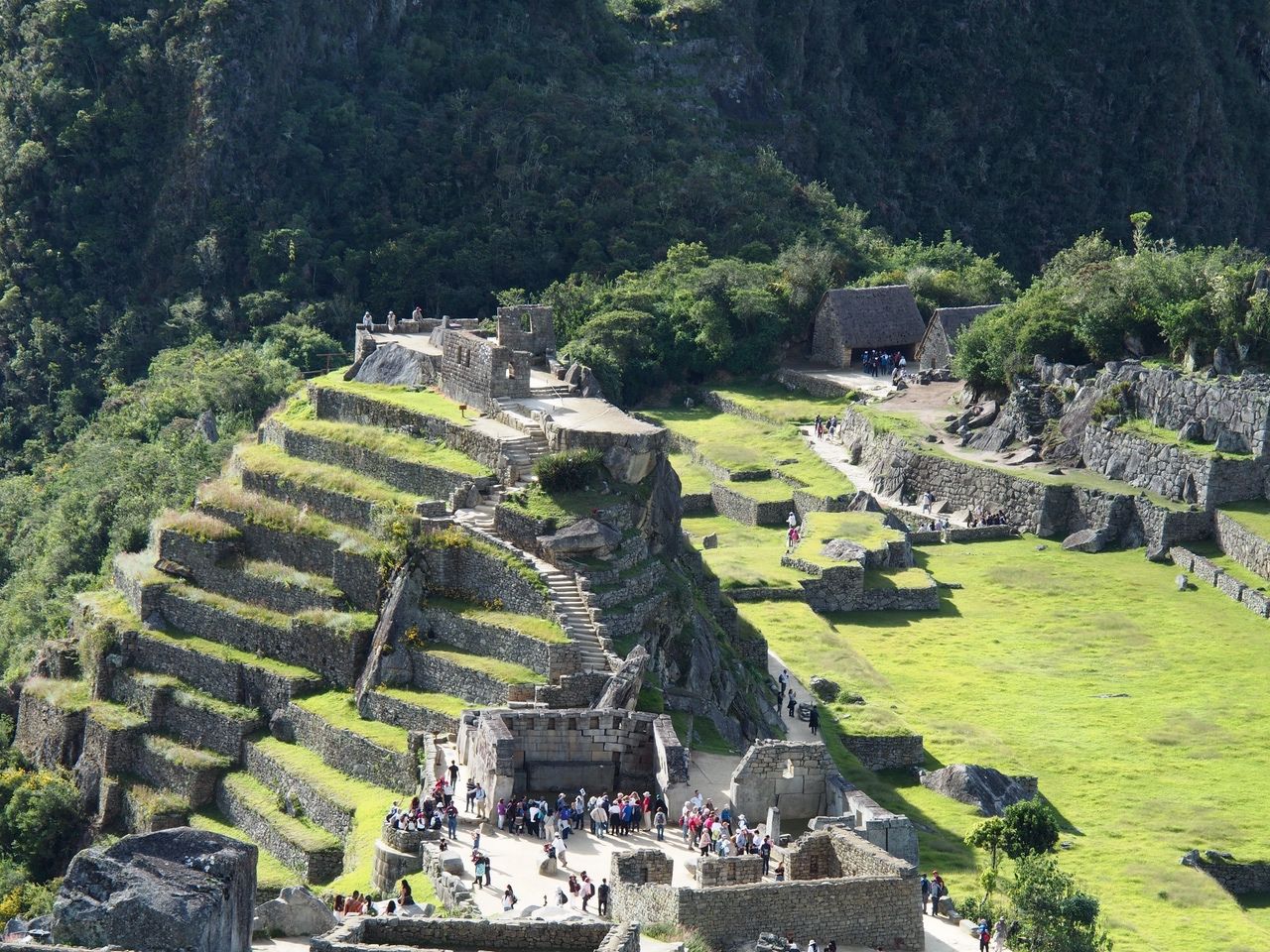 Looking up to the Sun Gate, a destination a small group of us planned to do first thing the next day. 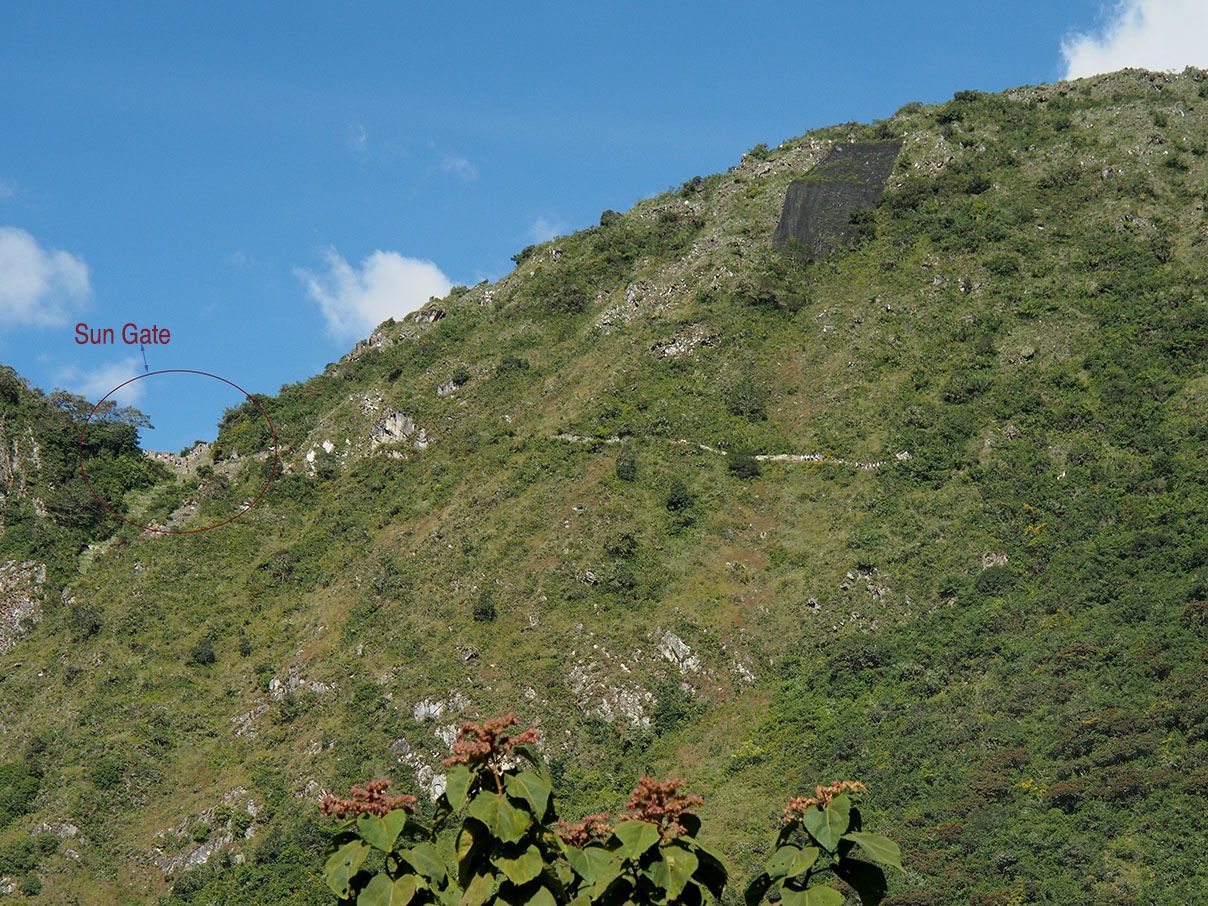 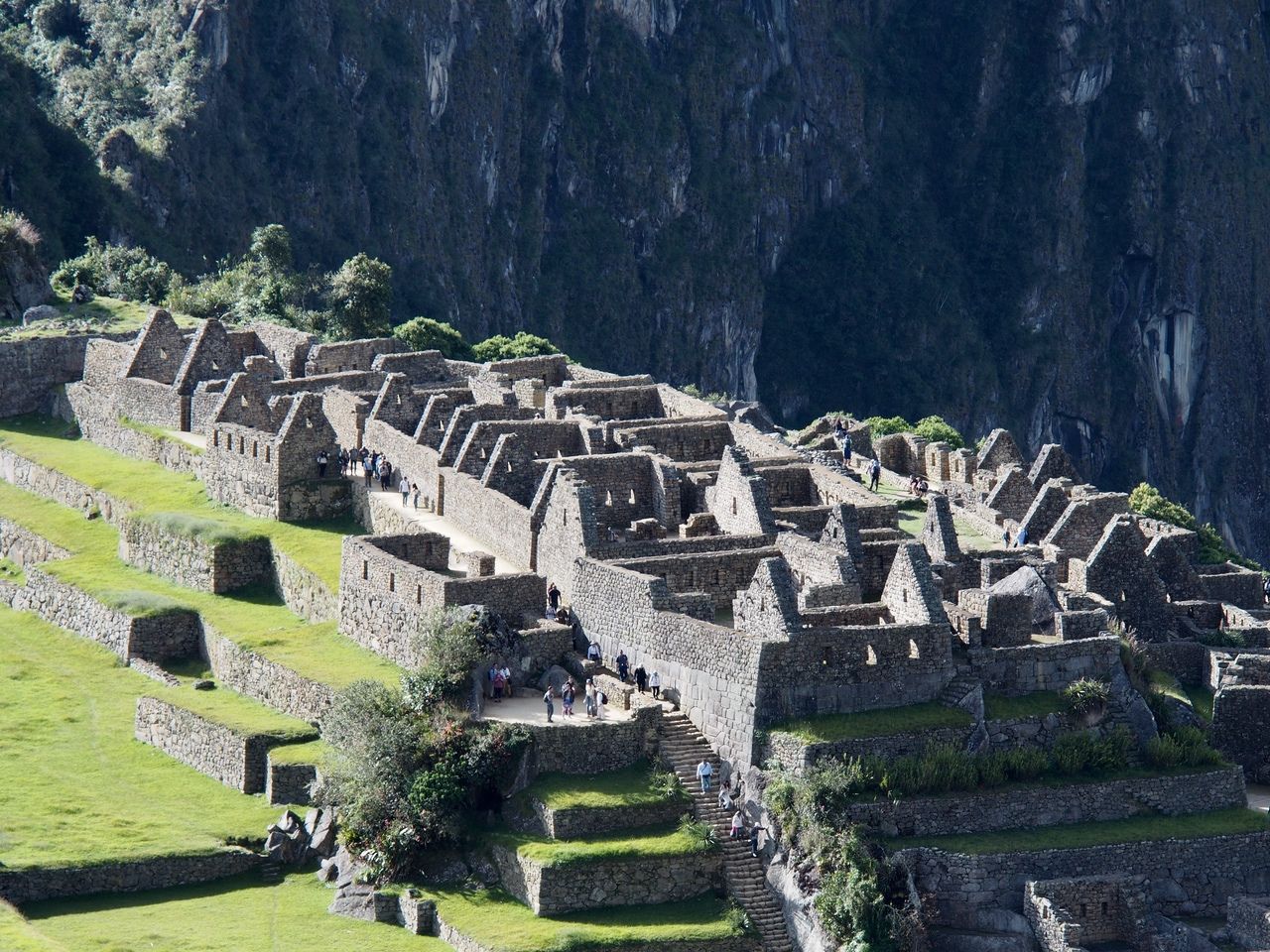 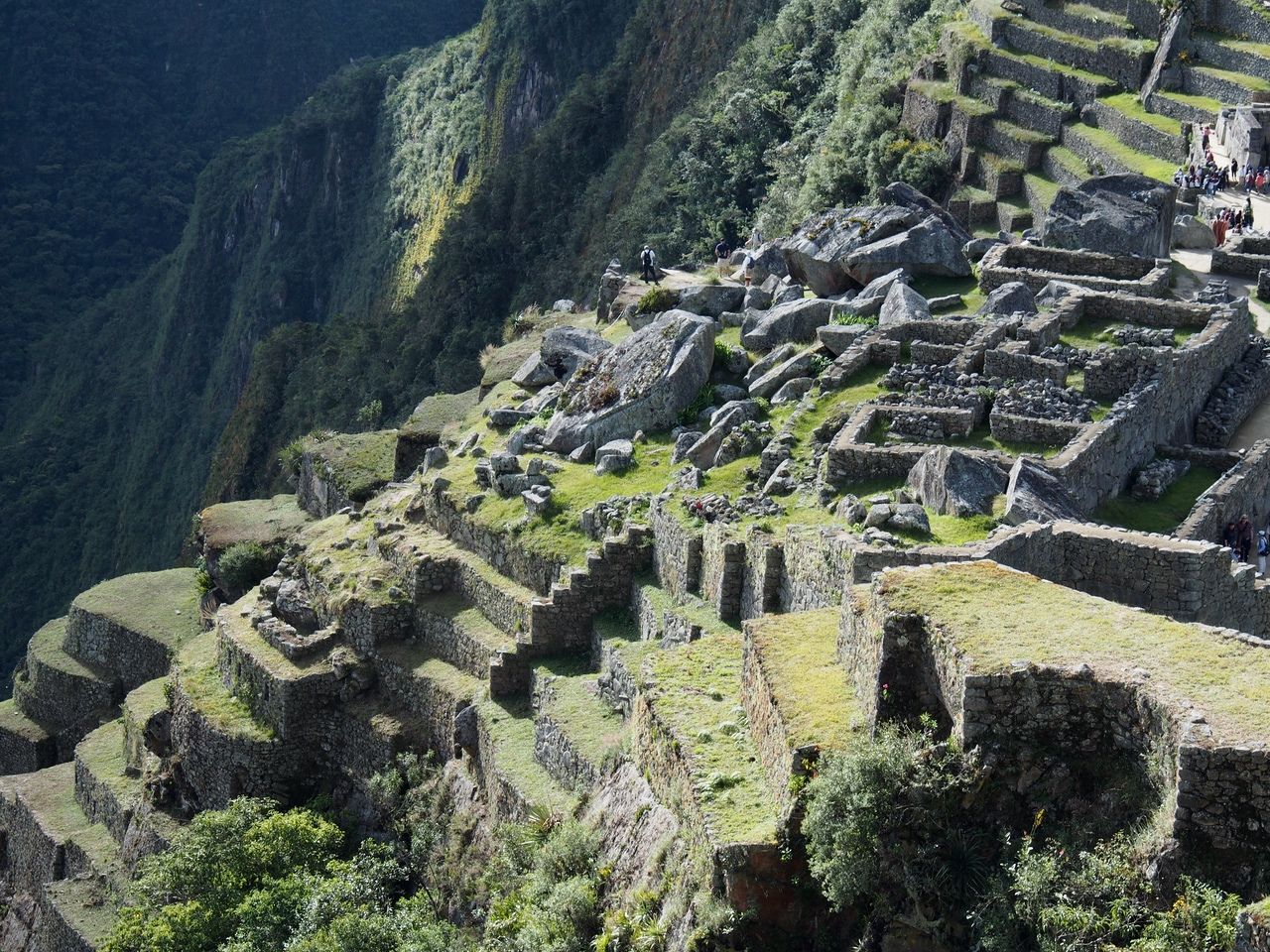 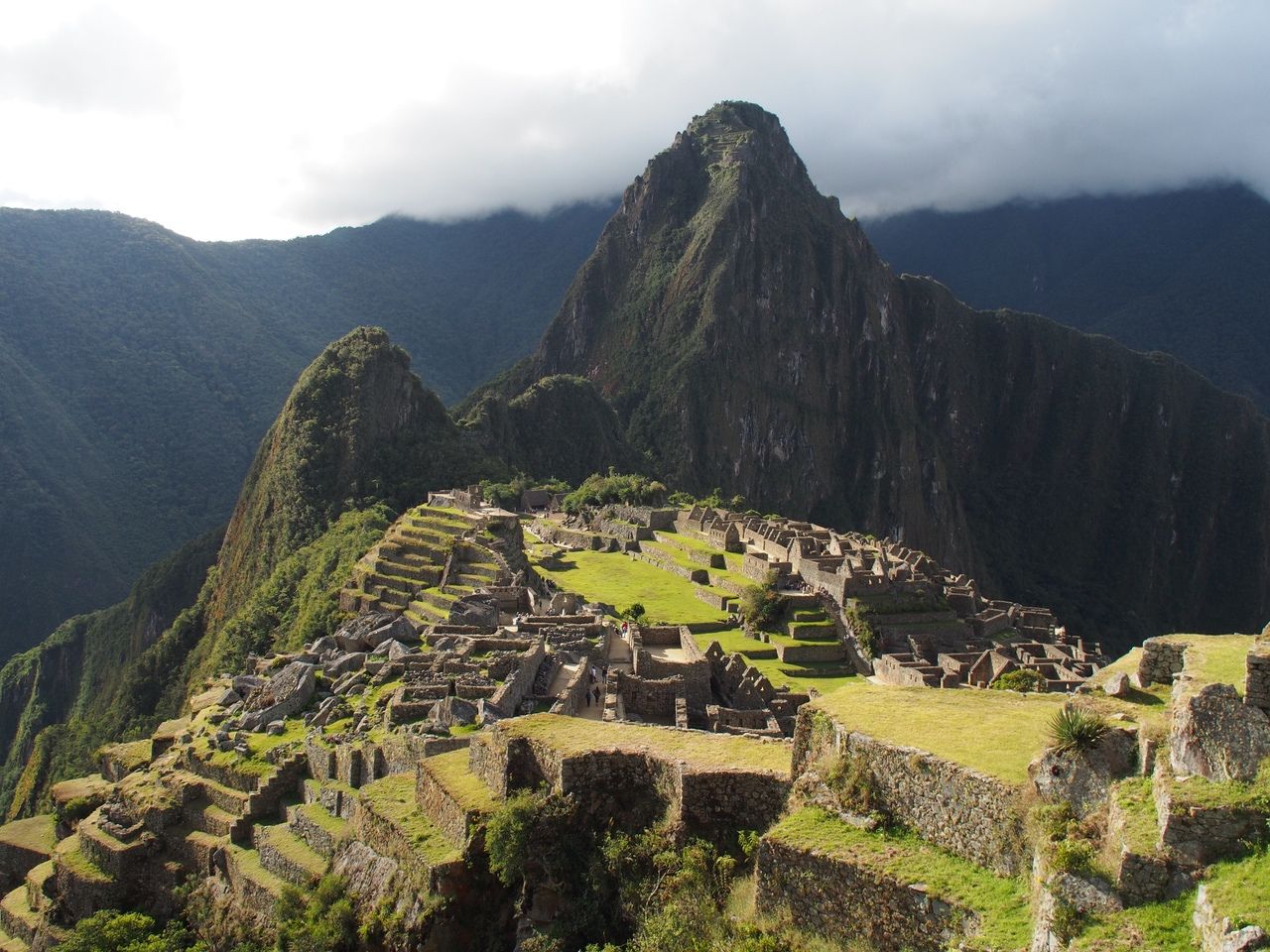 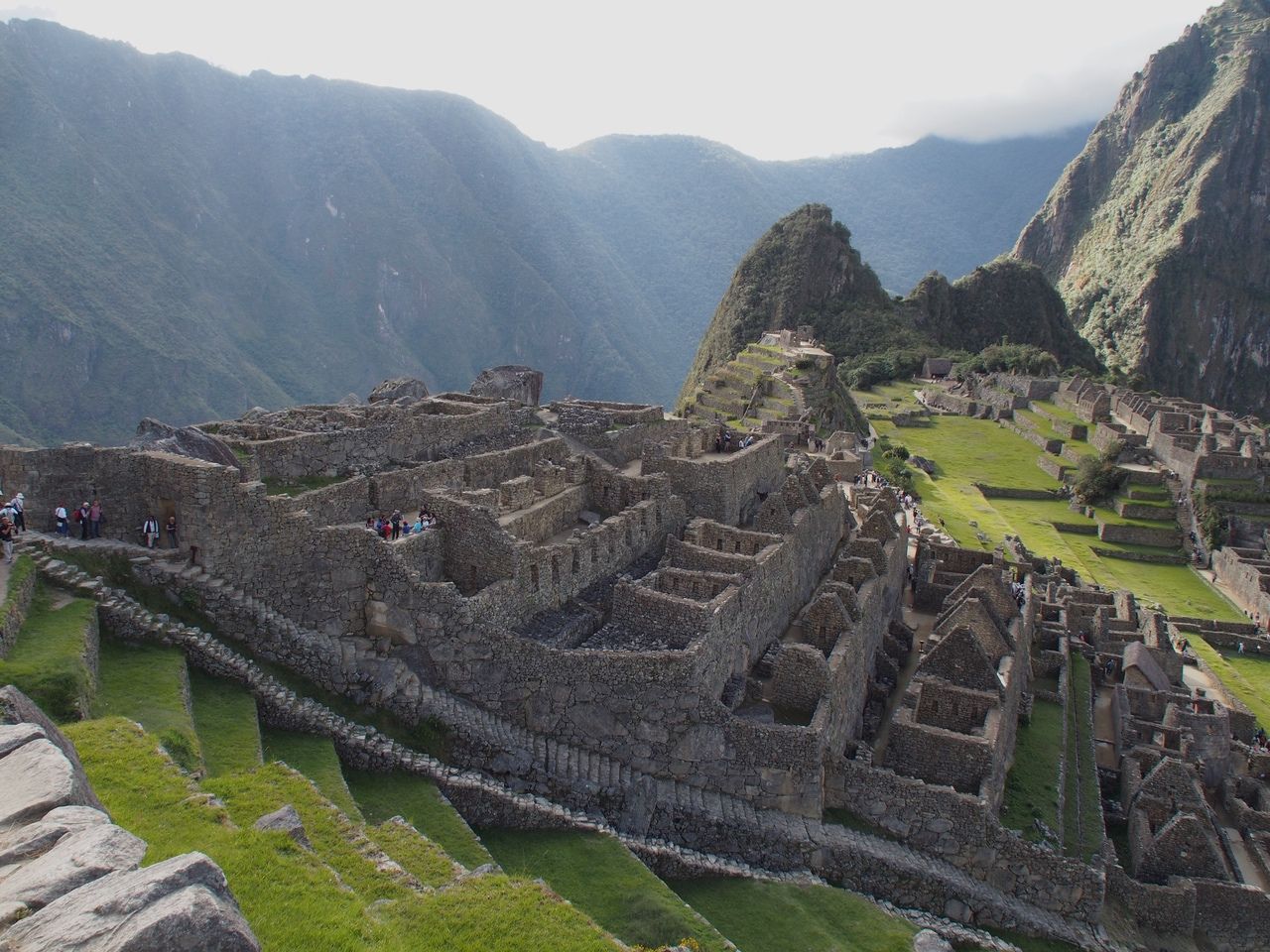 Intihuatana from the Plaza of the Temple of the Three Windows. Intihuatana, "the place when the sun gets tied", has a stone pillar in the center, believed to be a kind of clock to measure the solstices (visited on day 2). (Note that inti is the Quechua word for sun.) 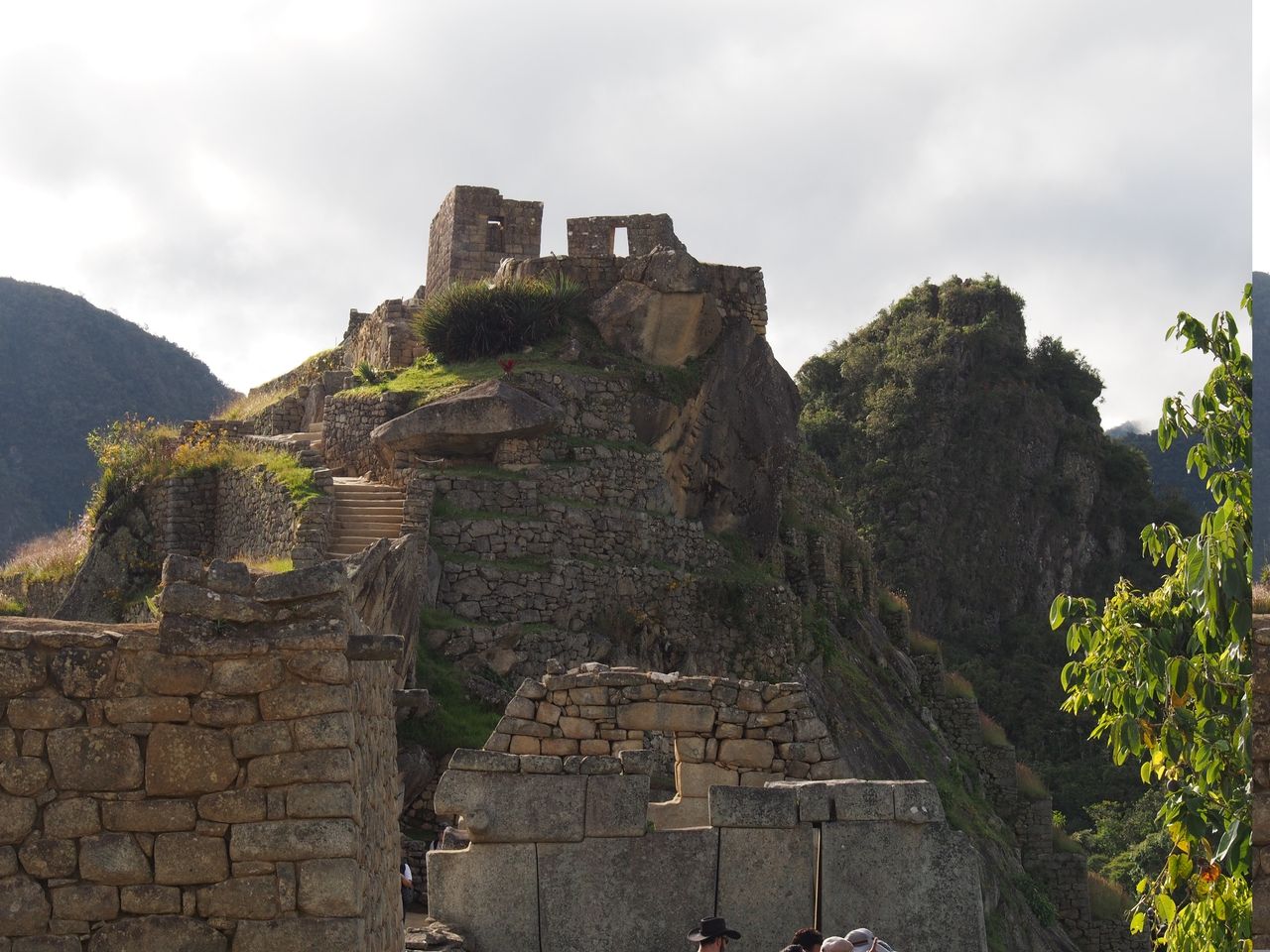 Temple of the Three Windows. 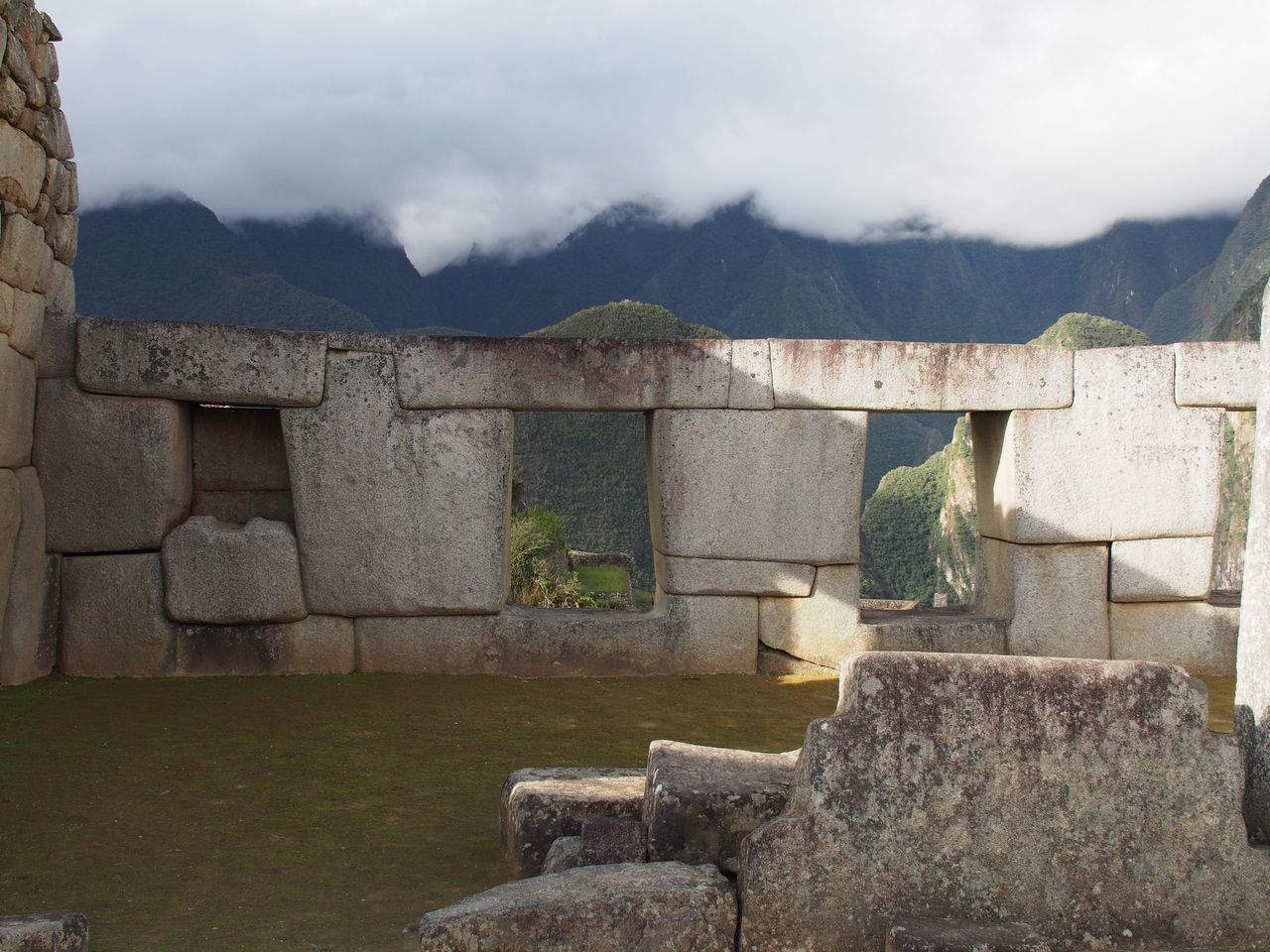 Looking back up to the terraces we took pictures from. 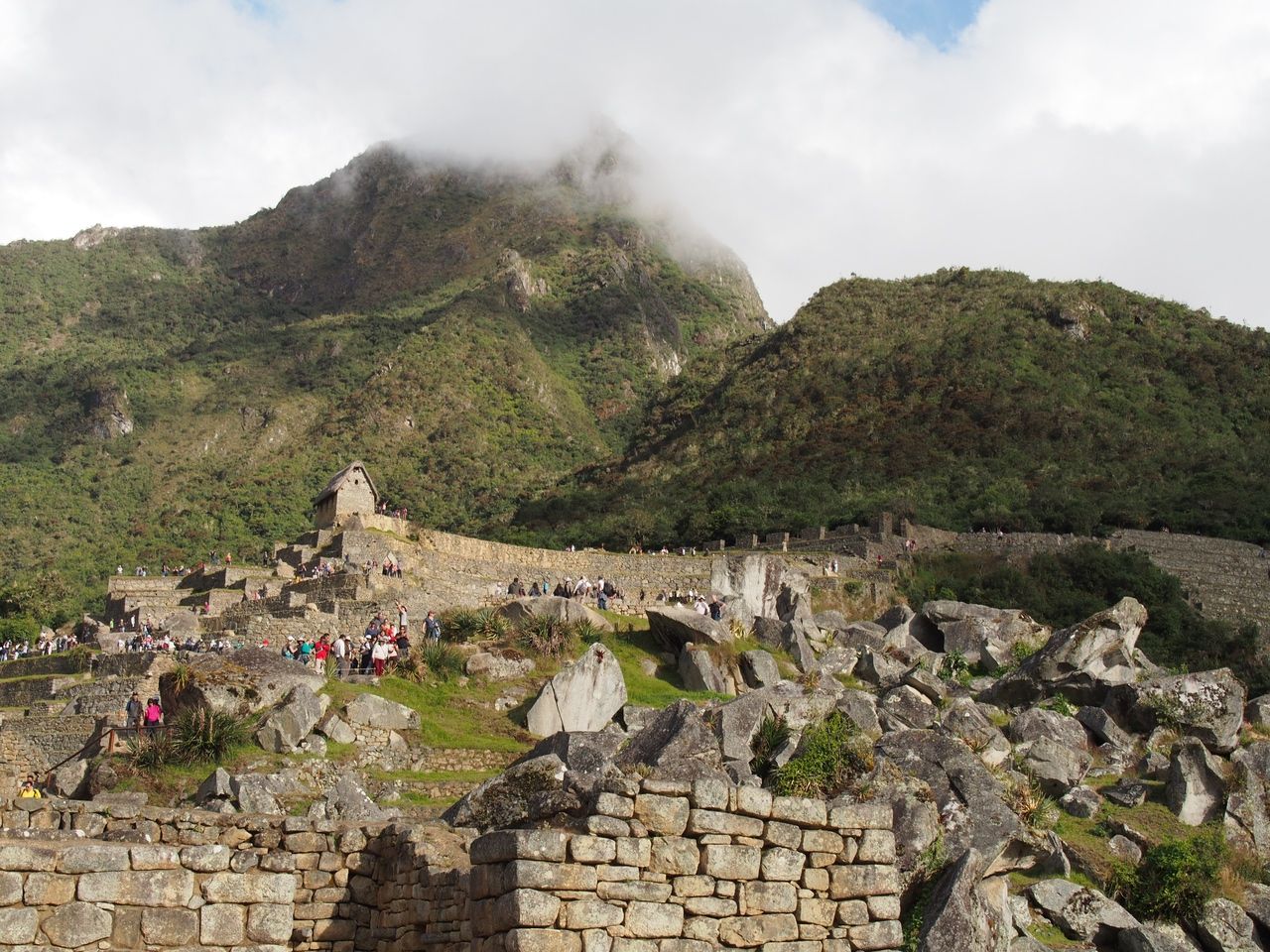 Looking over to the other side of the Principal Plaza. 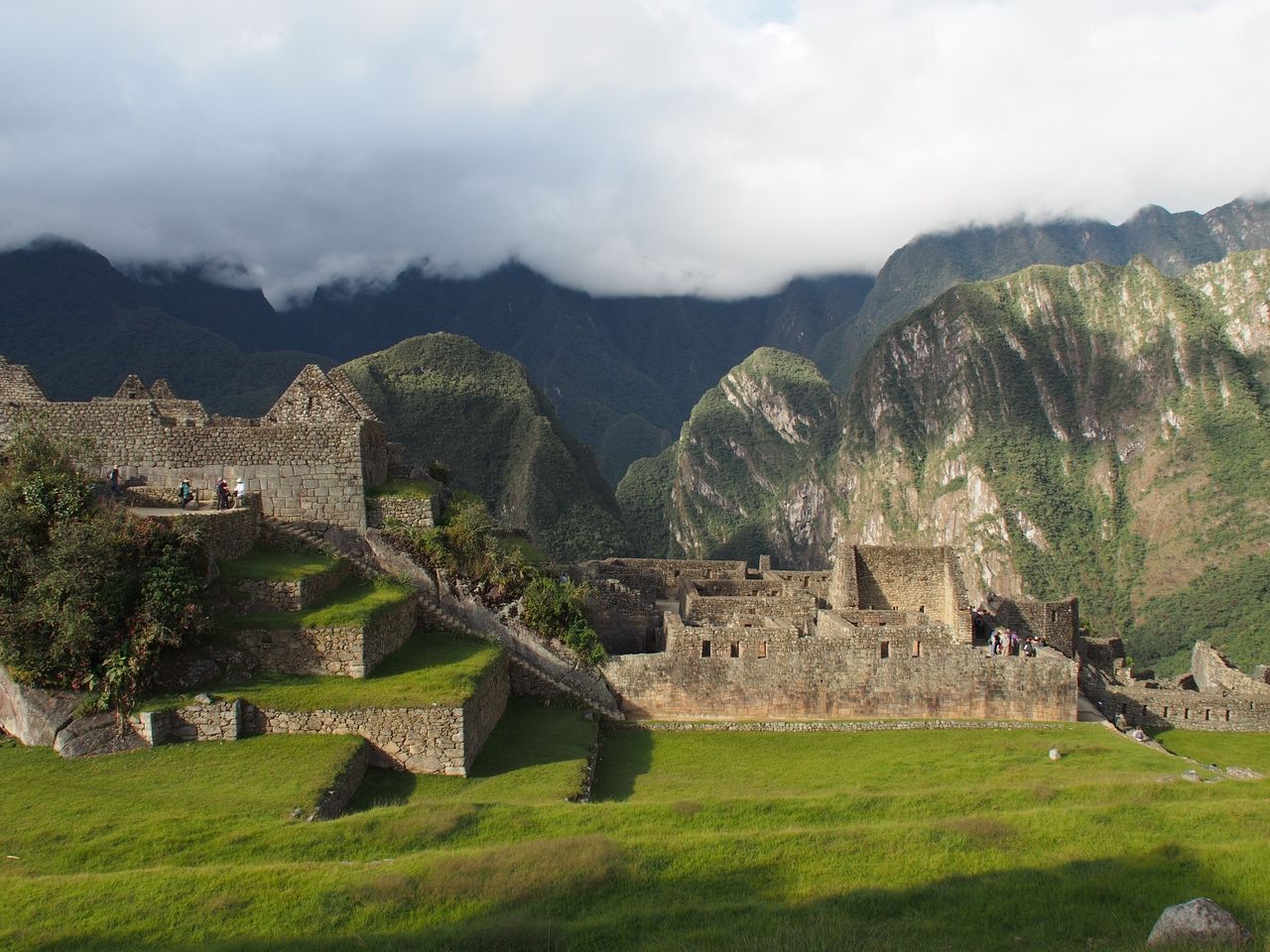 Eileen finished up along with the group, exiting down pretty much directly from the Temple of the Three Windows plaza, and then headed to the bar for a glass of Malbec. Terry and Jordan joined us for a few more rounds.
Dinner was in the dining room, and the food was excellent, starting with a salad, Eileen having duck, Larry having paiche (a white jungle fish), finishing up with a trio of ice cream for Eileen, and sorbet for Larry.
Bucket list part 1, day 1, what an awe inspiring treasure! The plan for day 2 was exploration in the area Larry walked to, starting at 8 am, with an option to independently walk to the Sun Gate high above the site, starting at 7 am.
Links:
Link to Perú – Day 6

Published by Eileen and Larry Samberg on May 25th, 2019