Wednesday, June 8, 2022
Our first stop was the synagogue (in Place Jerusalem), http://www.aci-avignon.com. We rang the doorbell and a woman let us in and let us wander around the main sanctuary and the women’s balcony. The arrival of the Jews in Avignon dates from the 1st century after the destruction of the Second Temple. The first synagogue on this site dates back to the 1200s and was part of a Jewish ghetto. The current synagogue was completed in 1848, after a fire destroyed the previous synagogue completed in 1787. 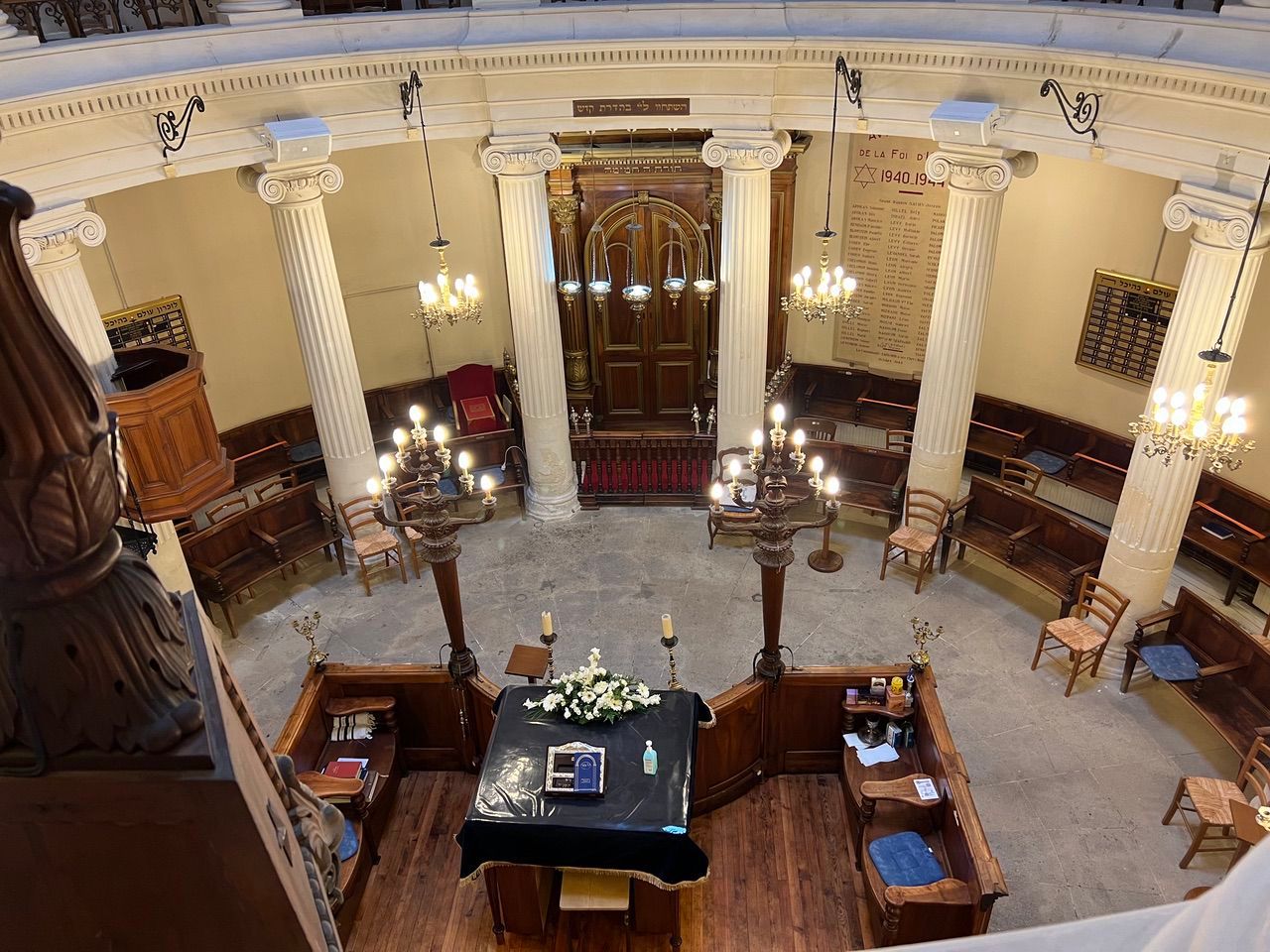 Our next stop Les Halles (Place Pie). This is a classic European market, open until 2 pm, with foodstuffs of all kinds. 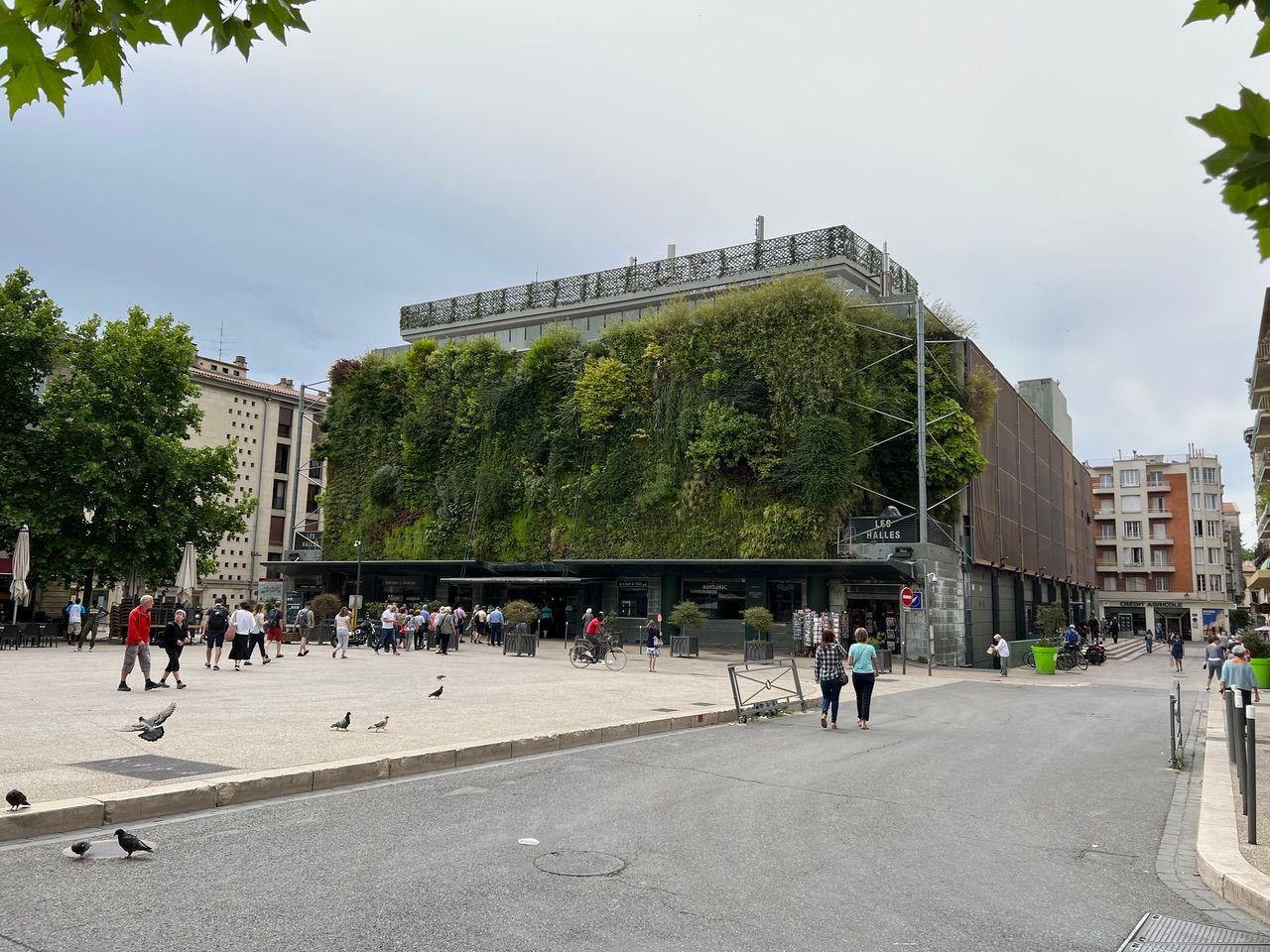 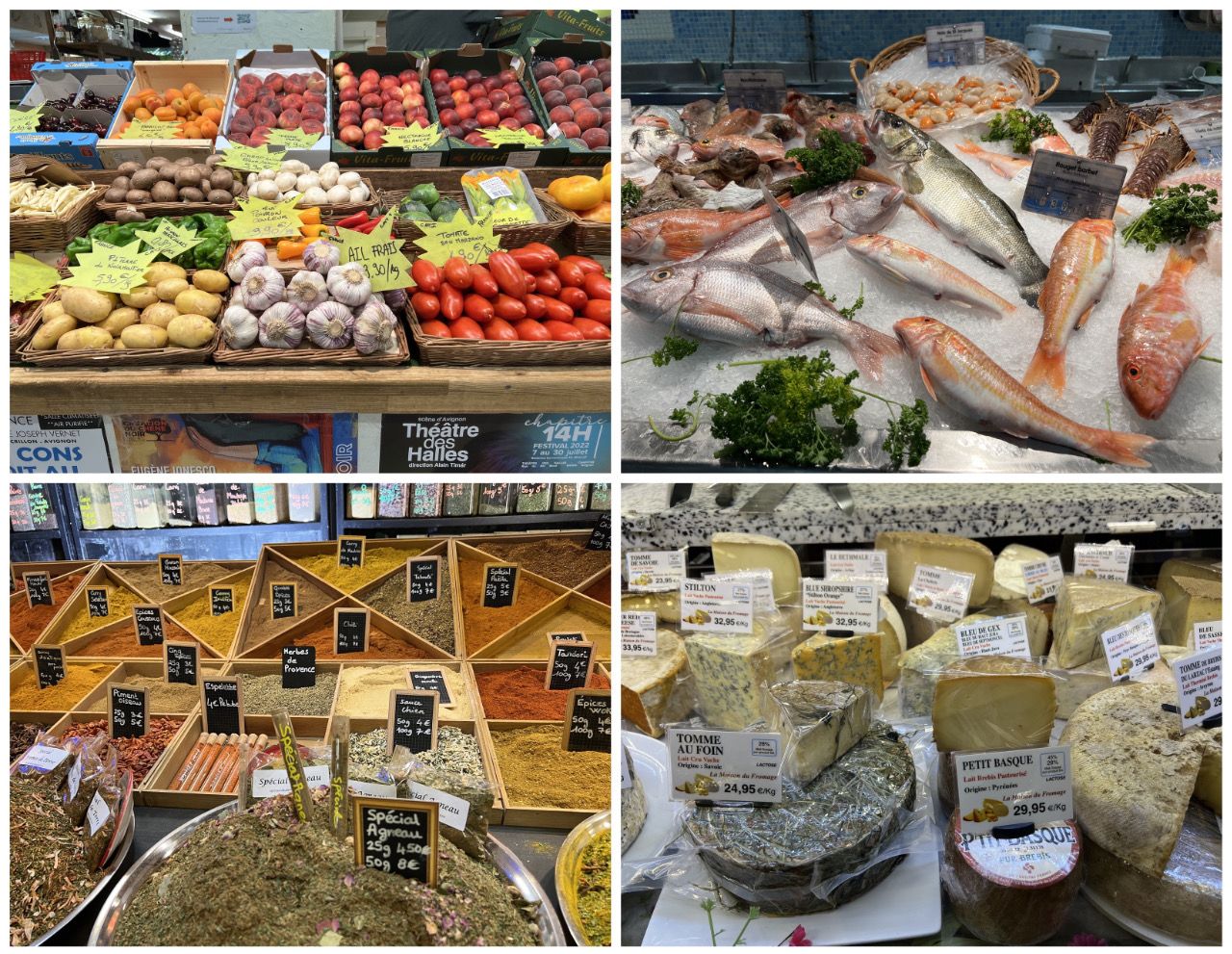 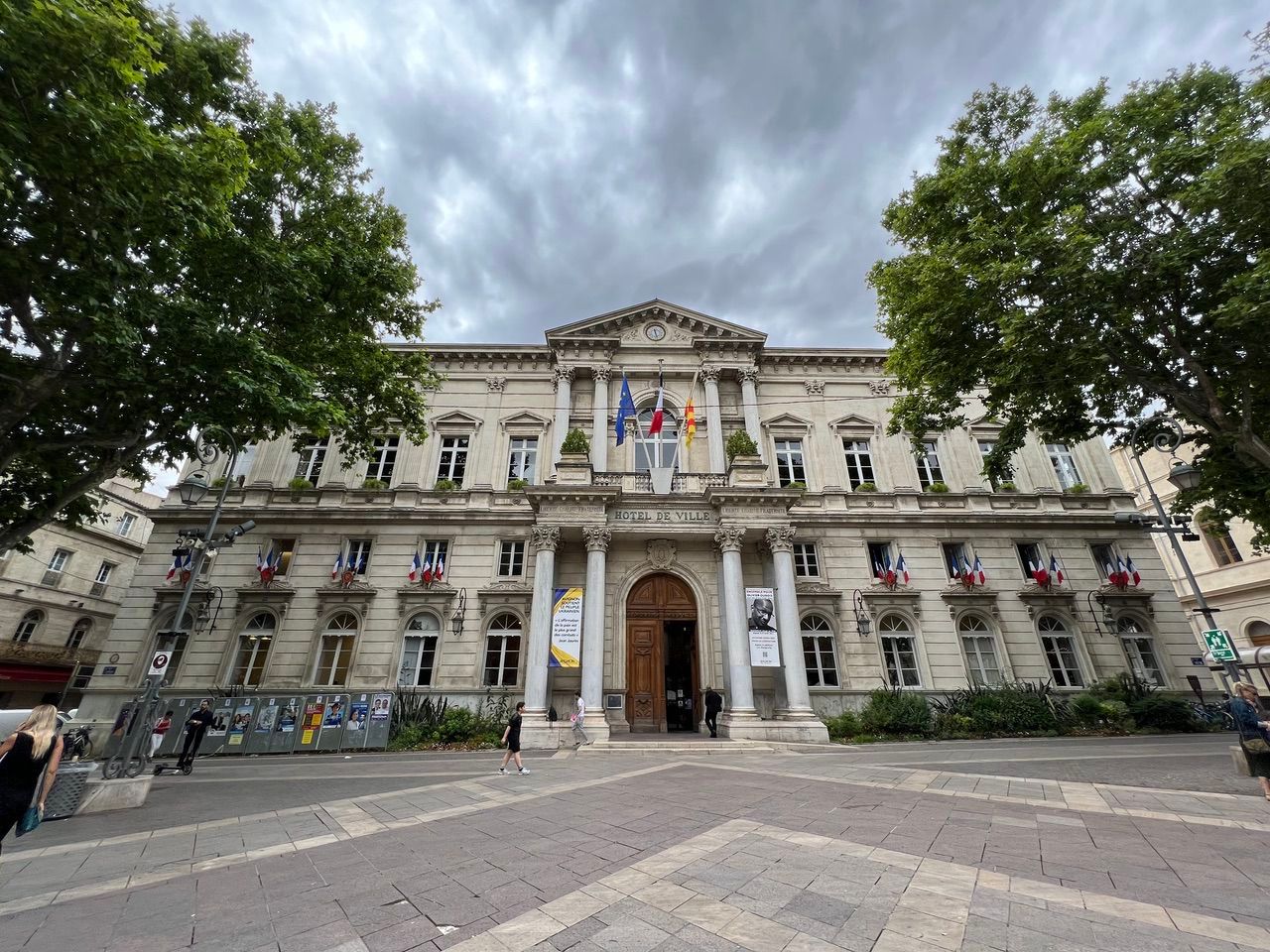 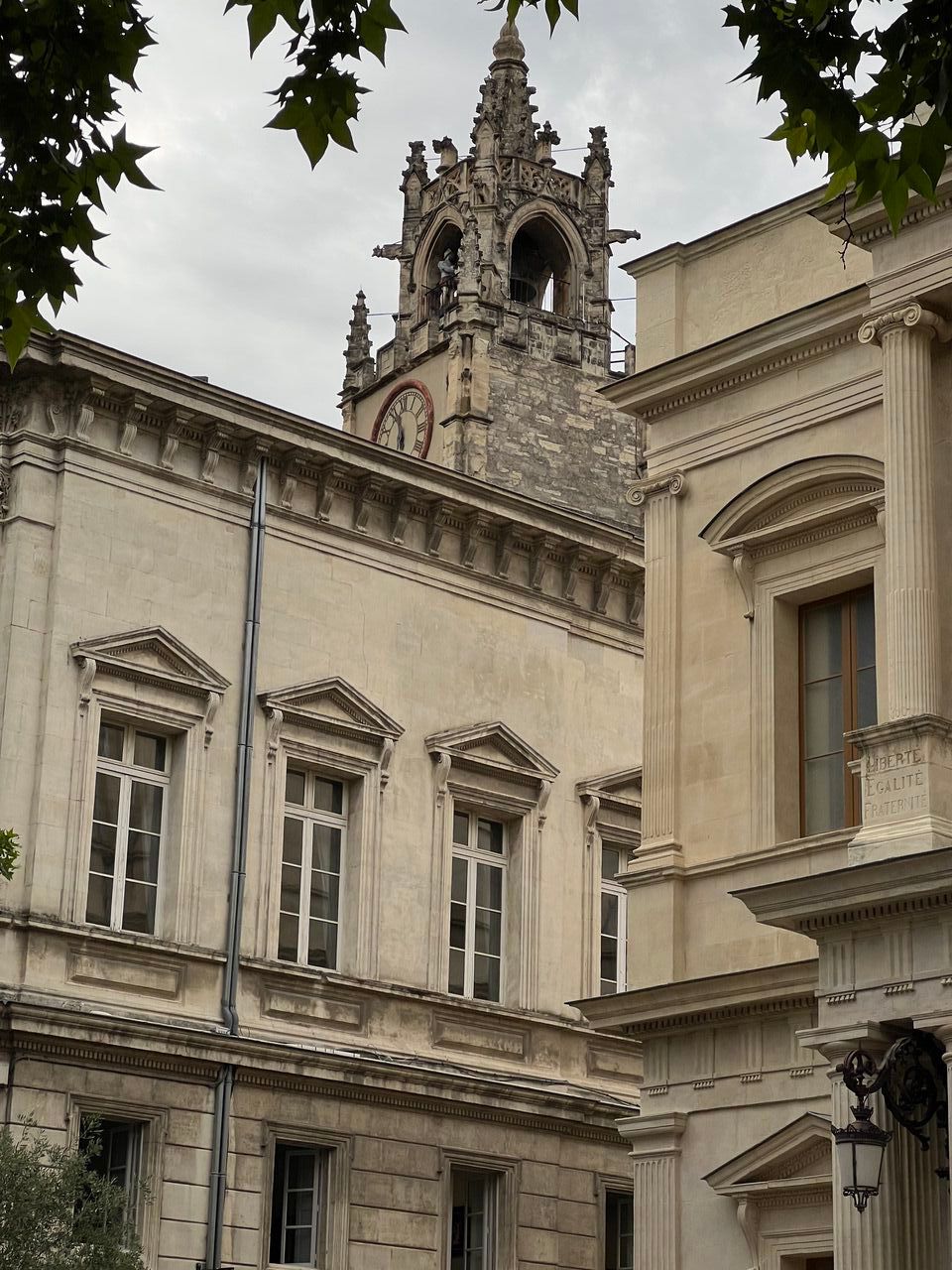 We headed to the square in front of the Palace of the Popes (home to the Popes in the 14th century), took a few pictures, and headed down side streets to the St. Benezet Bridge, more commonly know as "Pont d’Avignon." 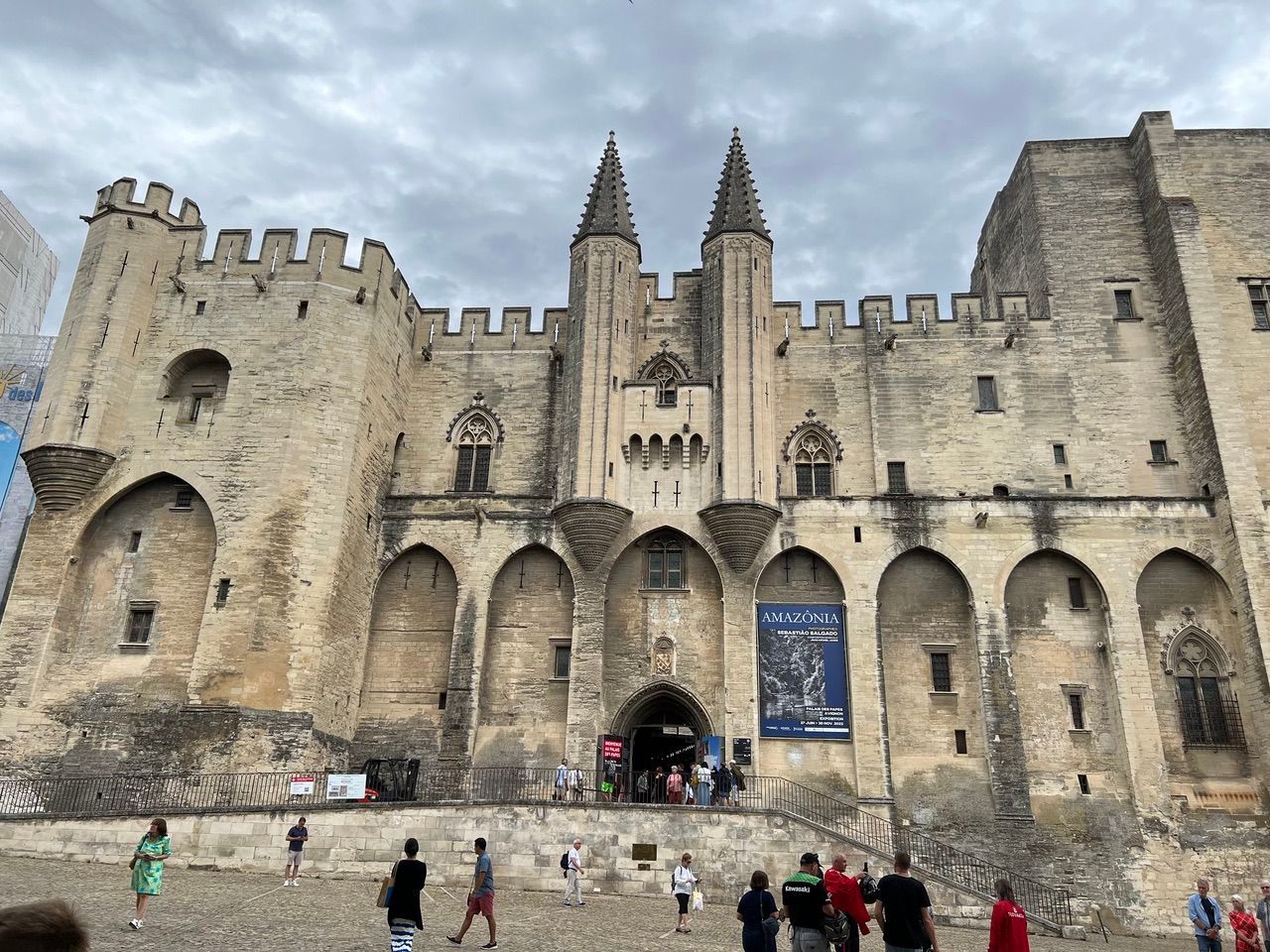 Using an iPod-type audio-guide, we walked along the bridge, stopping at various points, learning about the history of the bridge. "A wooden bridge spanning the Rhône between Villeneuve-lès-Avignon and Avignon was built between 1177 and 1185. This early bridge was destroyed forty years later in 1226 during the Albigensian Crusade when Louis VIII of France laid siege to Avignon. Beginning in 1234, the bridge was rebuilt with 22 stone arches. The stone bridge was about 900 m in length and only 4.9 m in width. The bridge was abandoned in the mid-17th century as the arches tended to collapse each time the Rhône flooded, making it very expensive to maintain. Four arches and the gatehouse at the Avignon end of the bridge have survived." 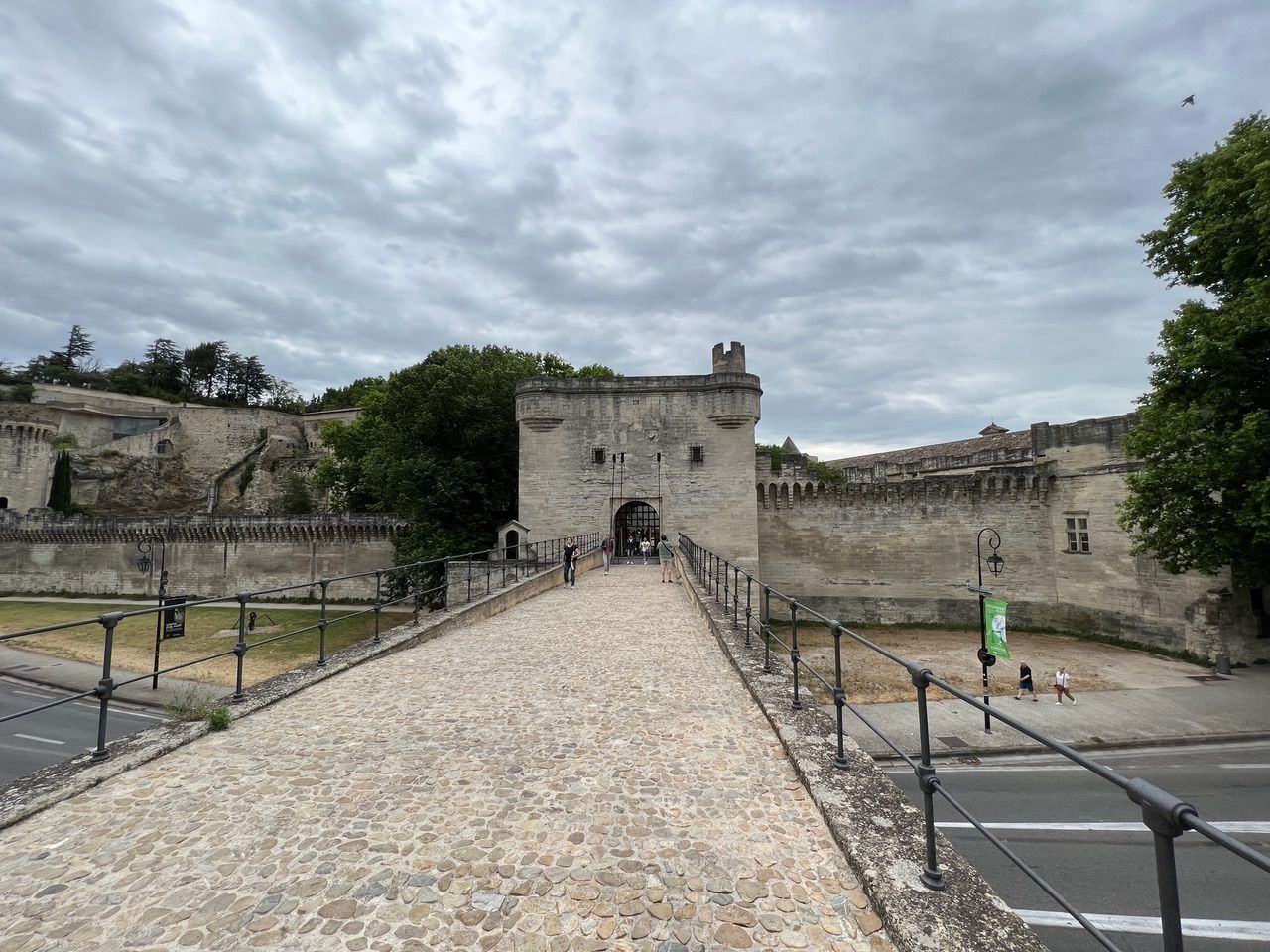 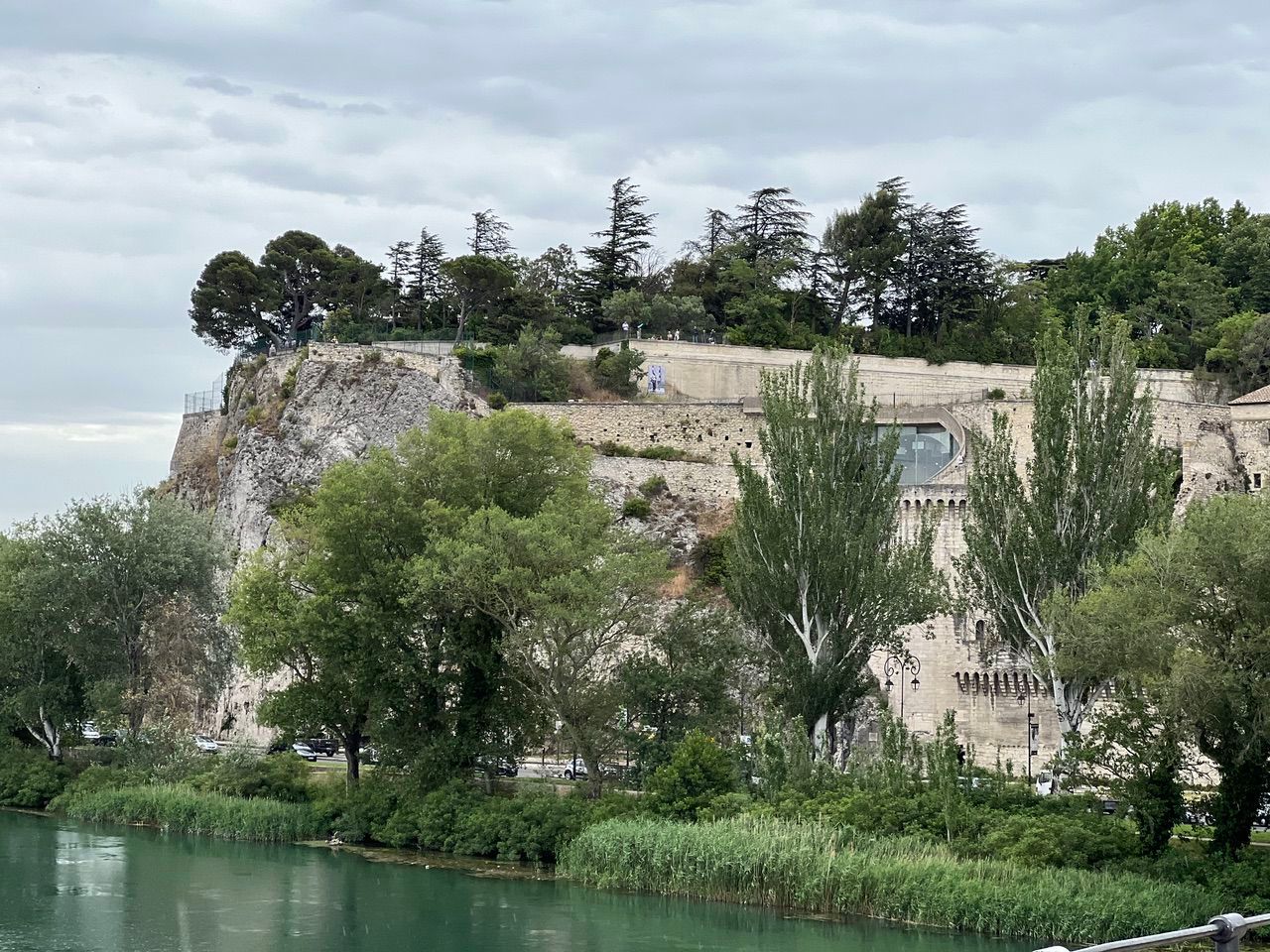 Next we headed up many, many steps to the Rocher des Doms, a beautiful park at the top (in picture above), with views of the river and Barthelasse (an island between two sections of the Rhône), and of the mountains to the east. The timing didn’t work out to take the ferry to Barthelasse, with its path along the river and the classic view of the Pont d’Avignon. 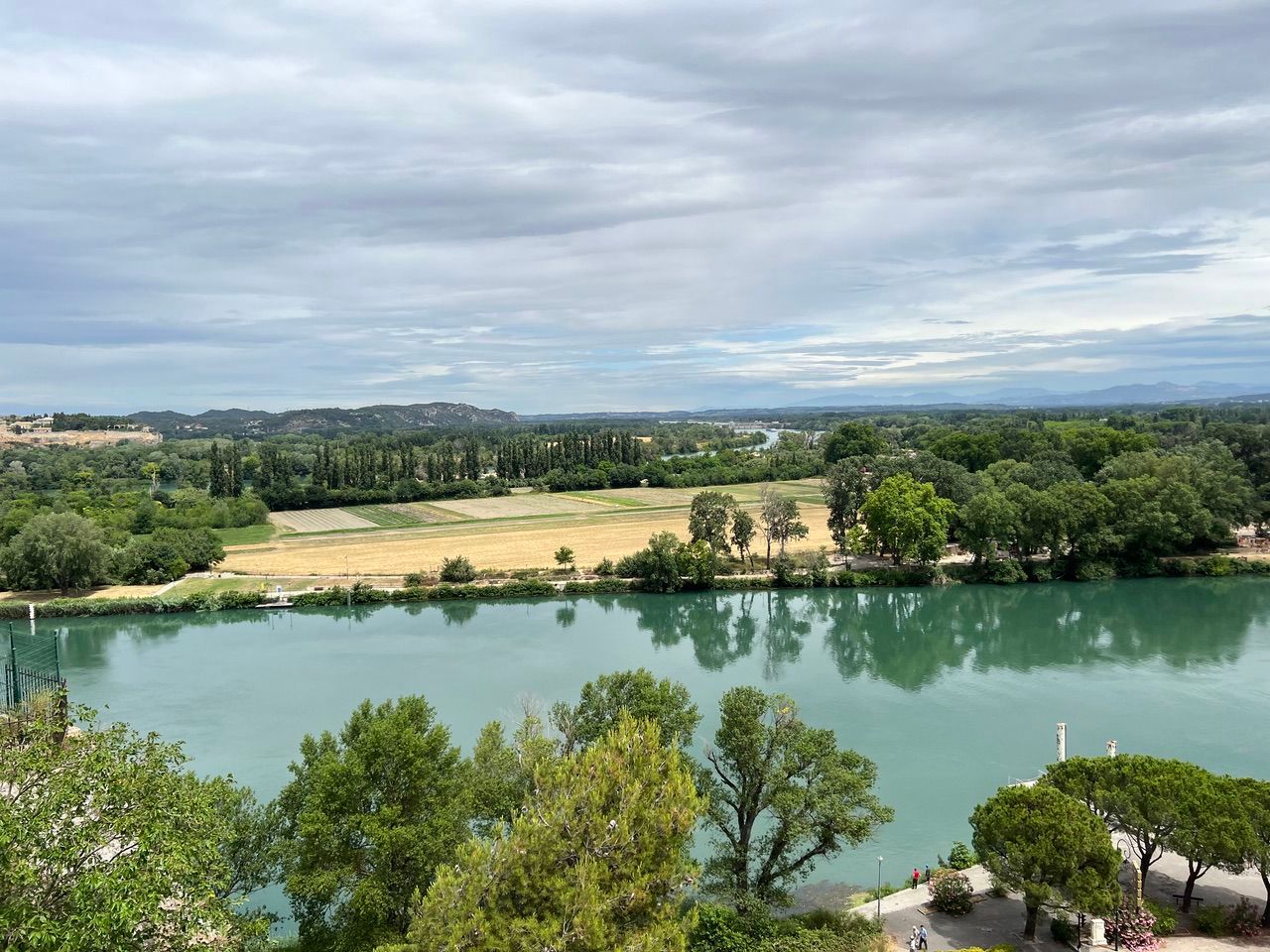 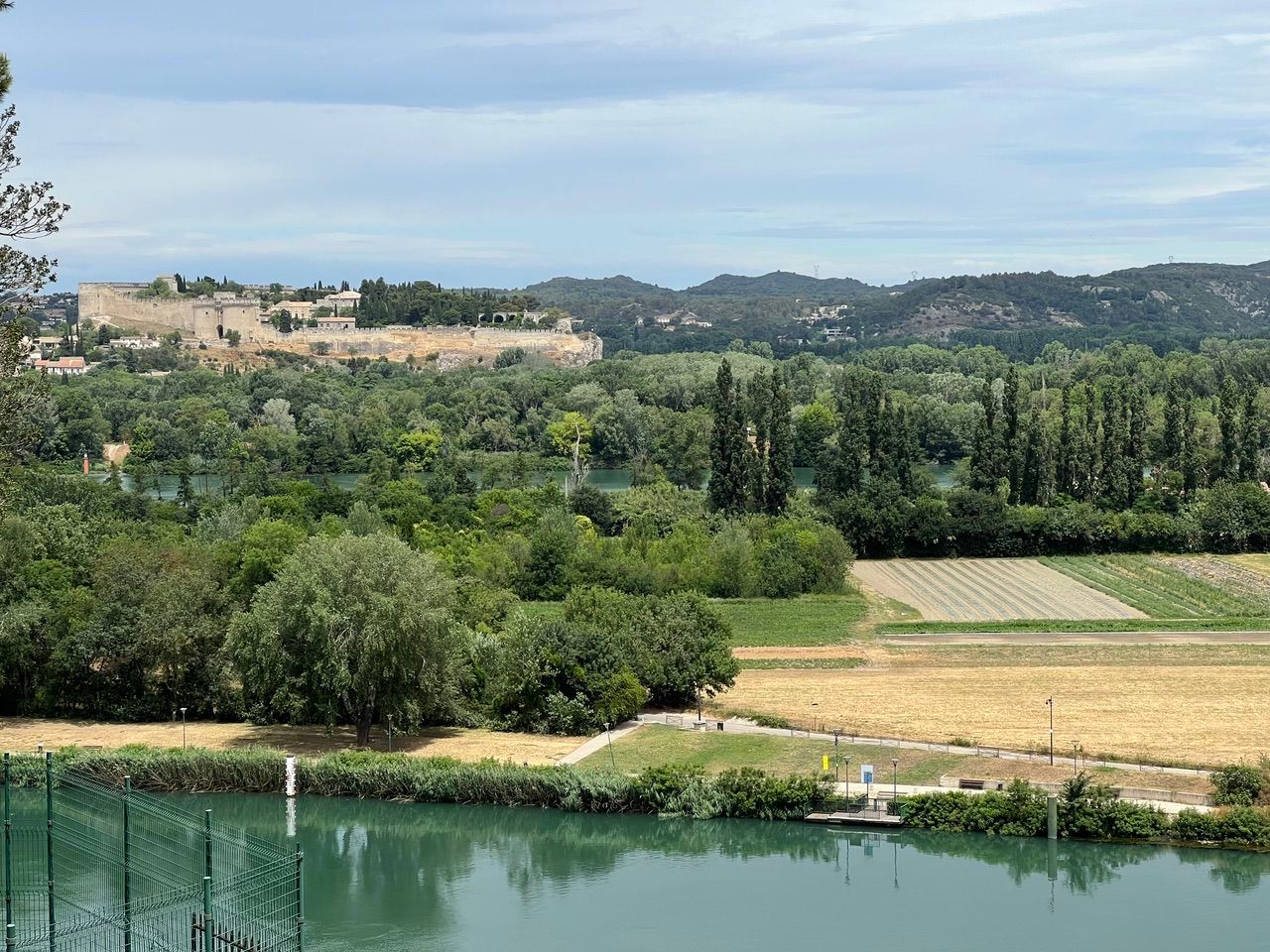 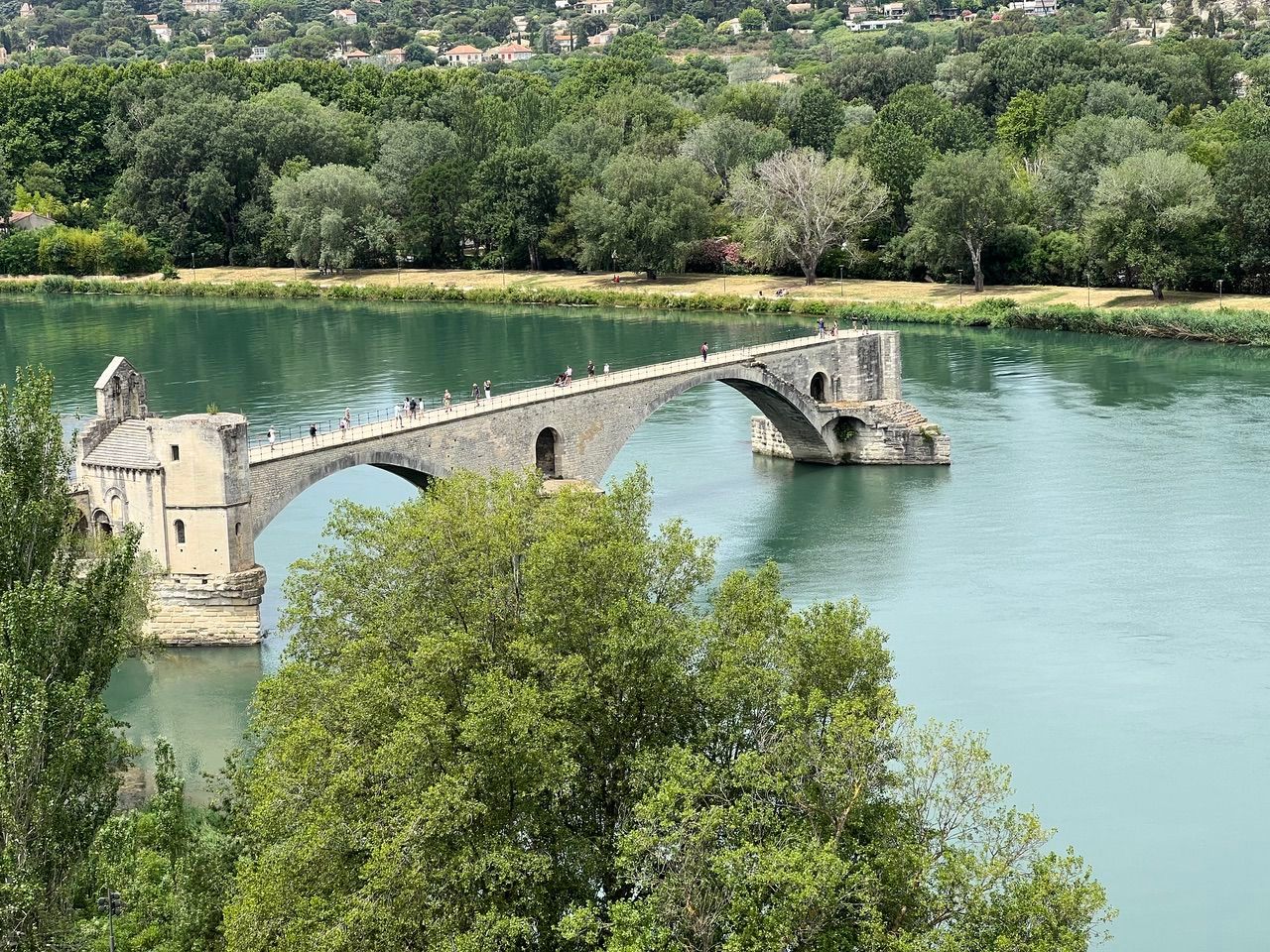 We headed back down the ramps back to the Palace of the Popes, and retraced our steps past Les Halles to the Rue de Teinturiers (dyers). This street, with canals and waterwheels, was the textile manufacturing area in the 1800s. We also had a wonderful lunch at L’Offset (Chicken Caesar salad and wine, of course). 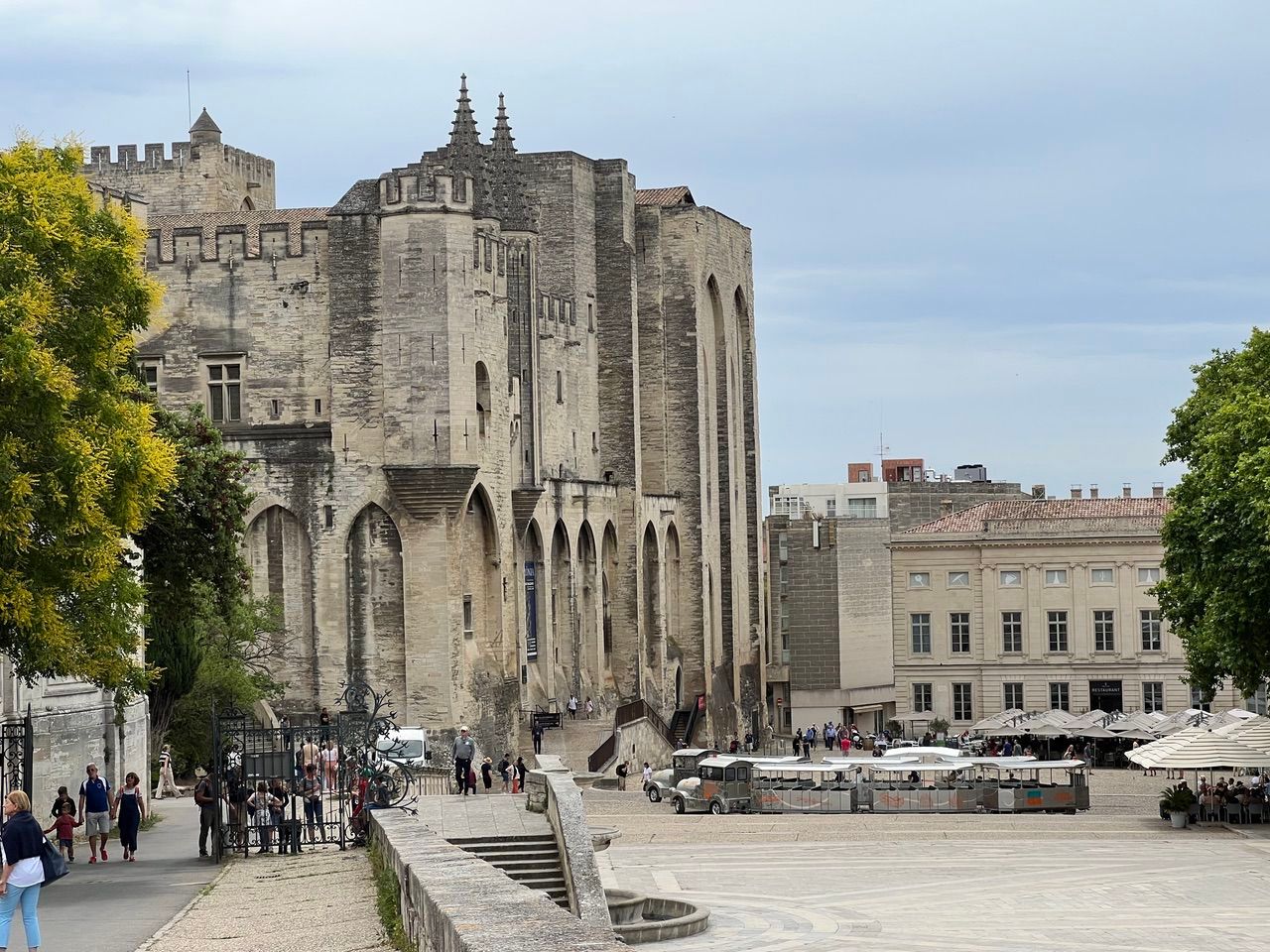 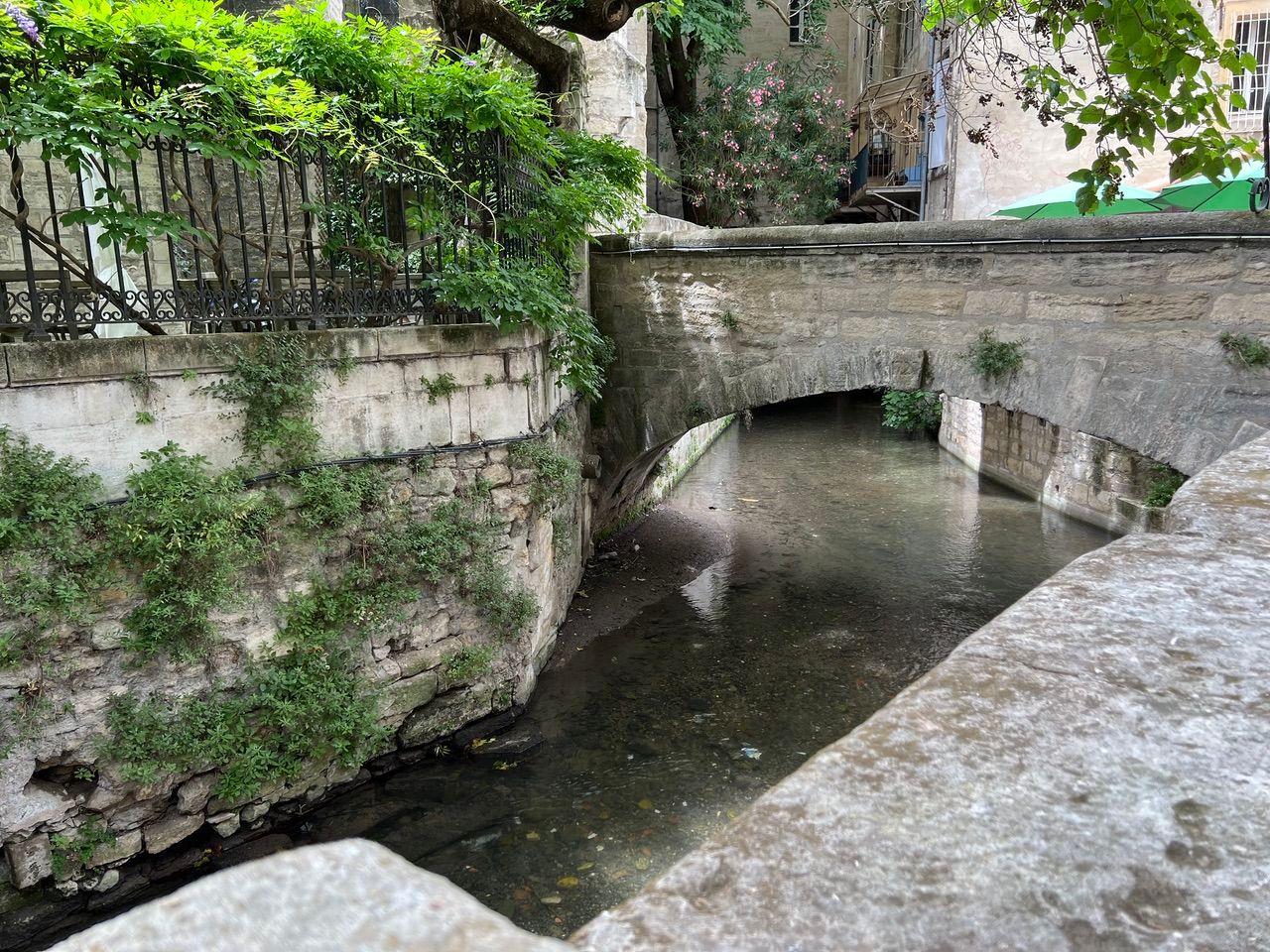 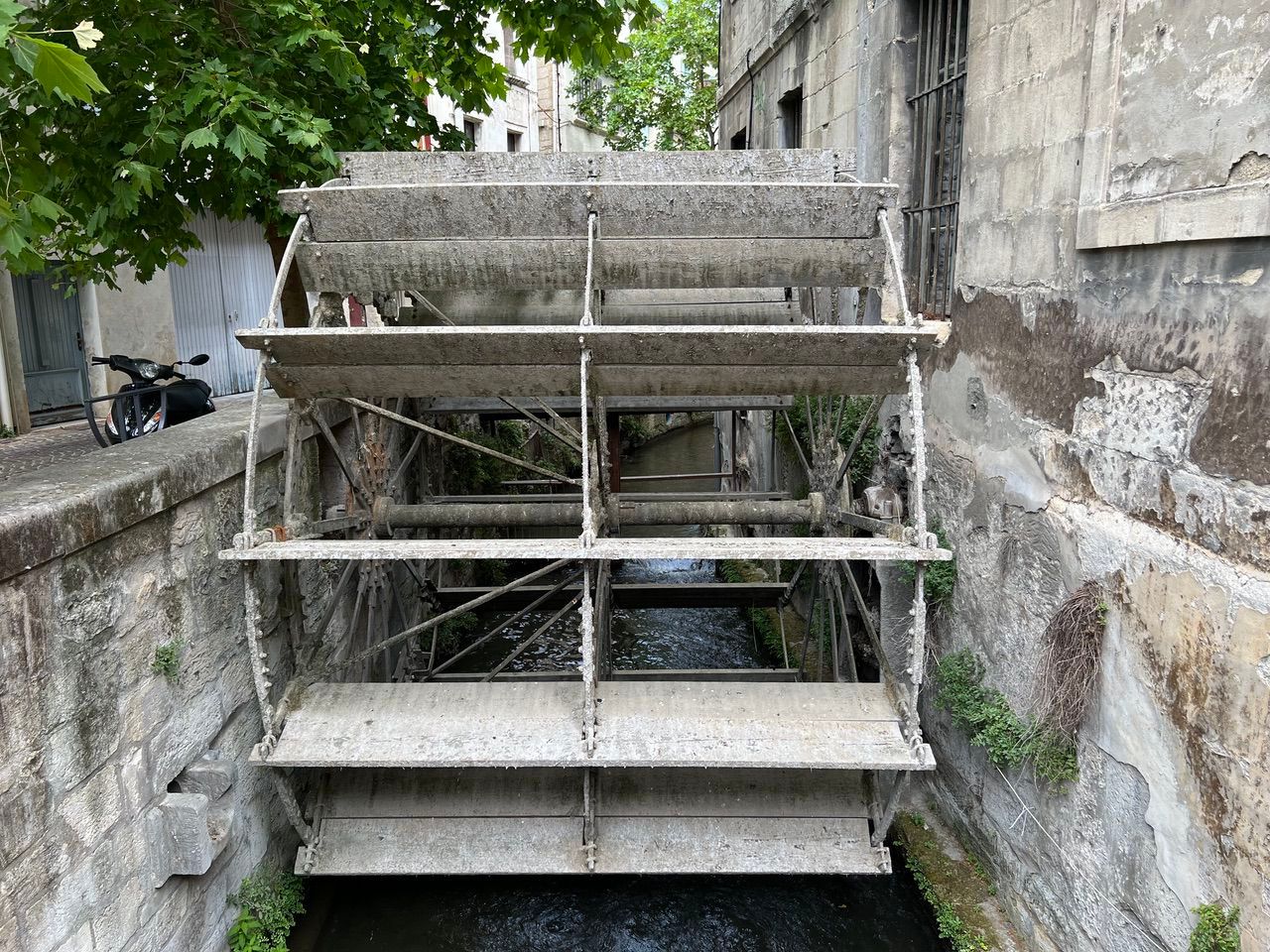 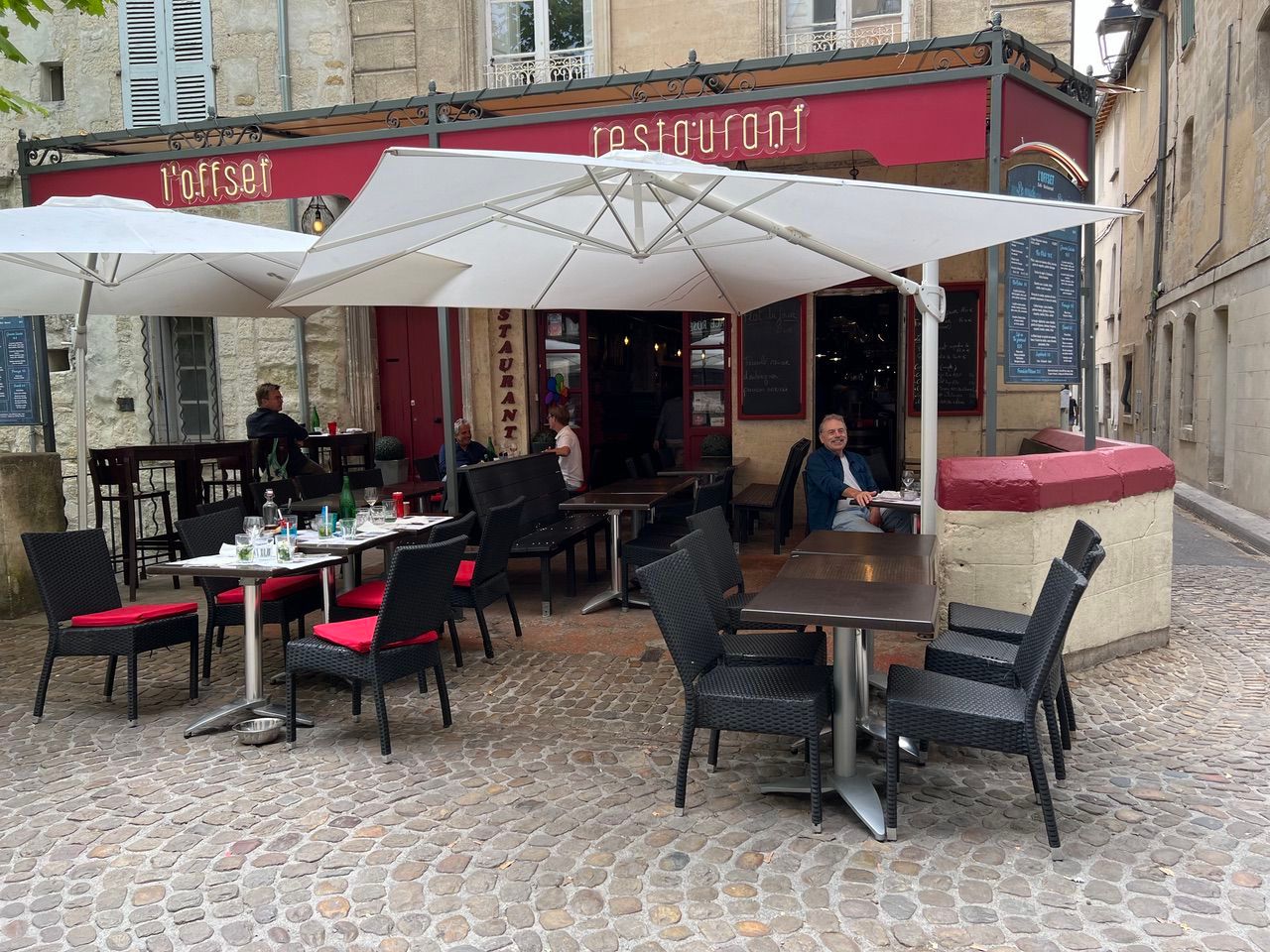 Dinner was at La Cour d’Honneur, down the street, recommended by our hotel. Larry had gravlax, shared, which was more like sushi, and was excellent. Larry had sea bass, Eileen sea bream. Eileen had dessert, shared. 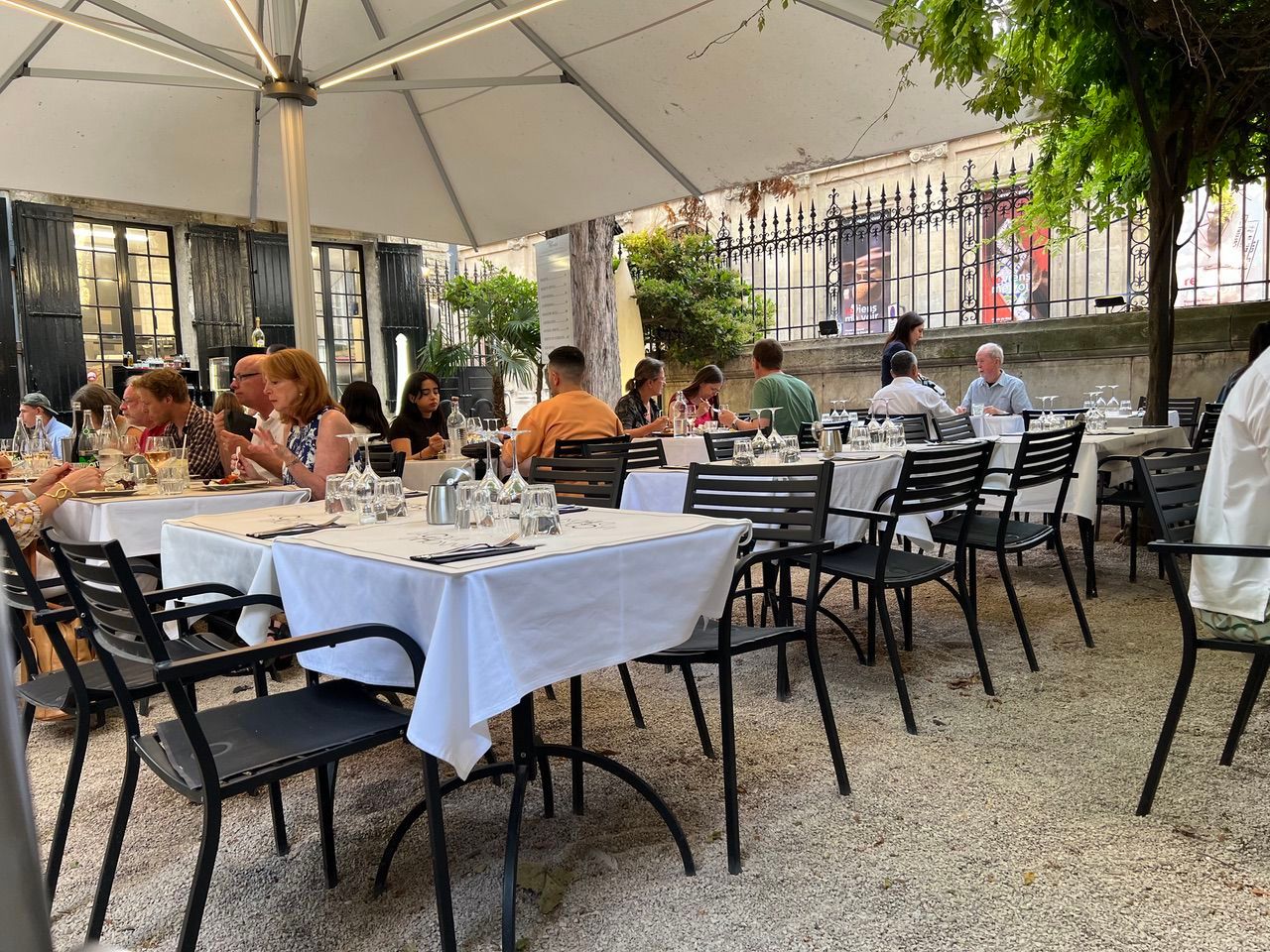 Published by Eileen and Larry Samberg on June 8th, 2022