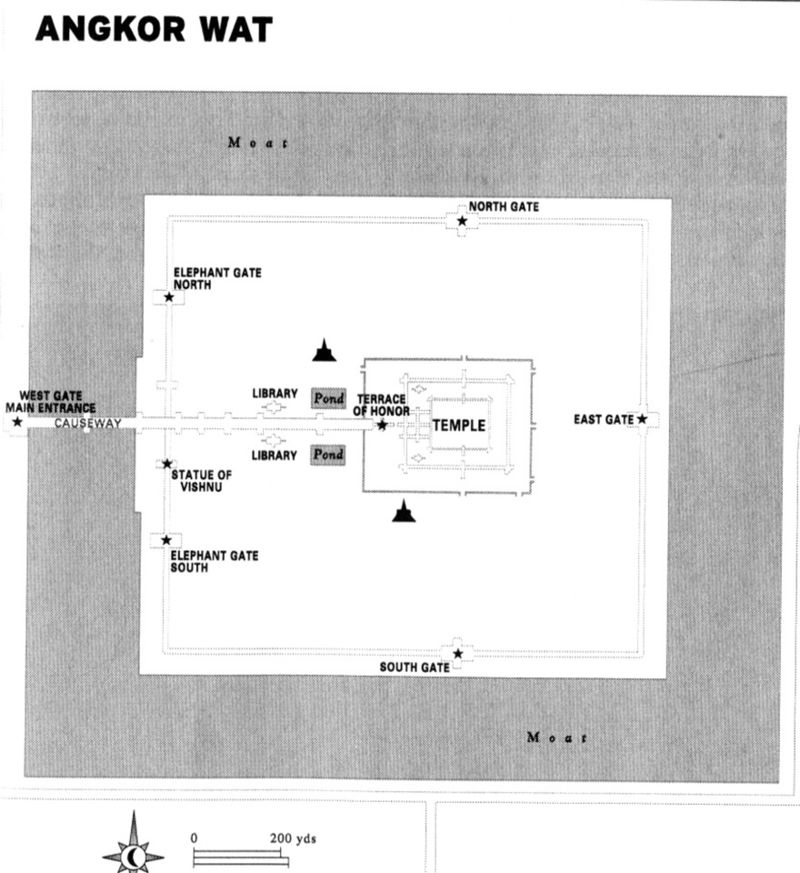 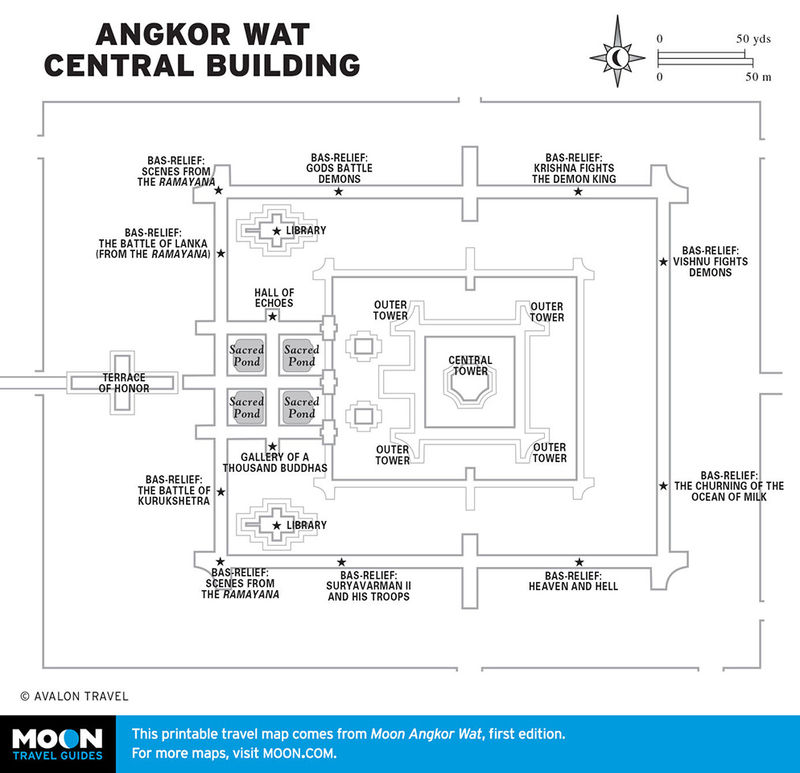 We left at 5:15 am for sunrise at Angkor Wat. We entered through the east gate (crowds enter on West), walked around north to west for sunrise. The sunrise was a little muted but very nice. There were so many people waiting with us. We took a number of pictures trying to capture both the temple and the reflection in the pools. 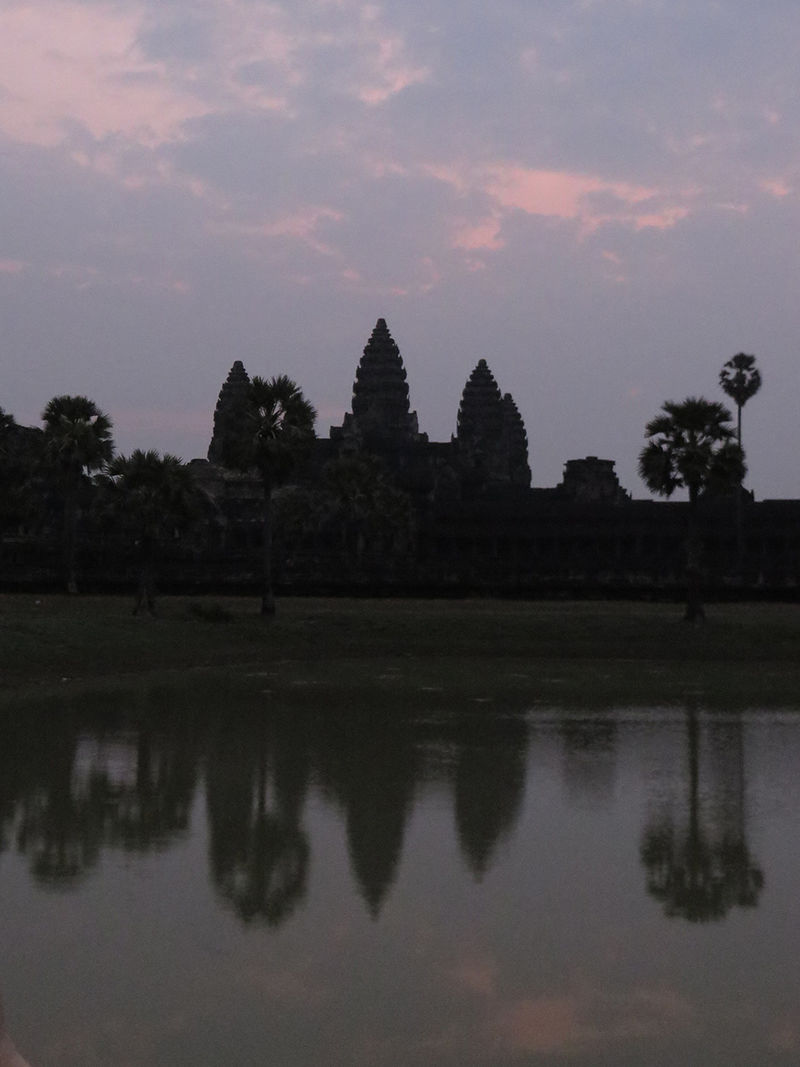 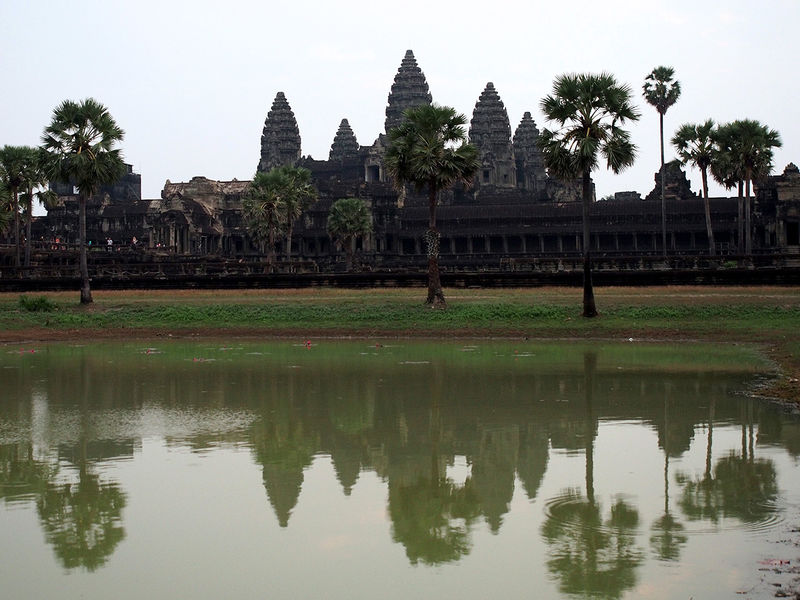 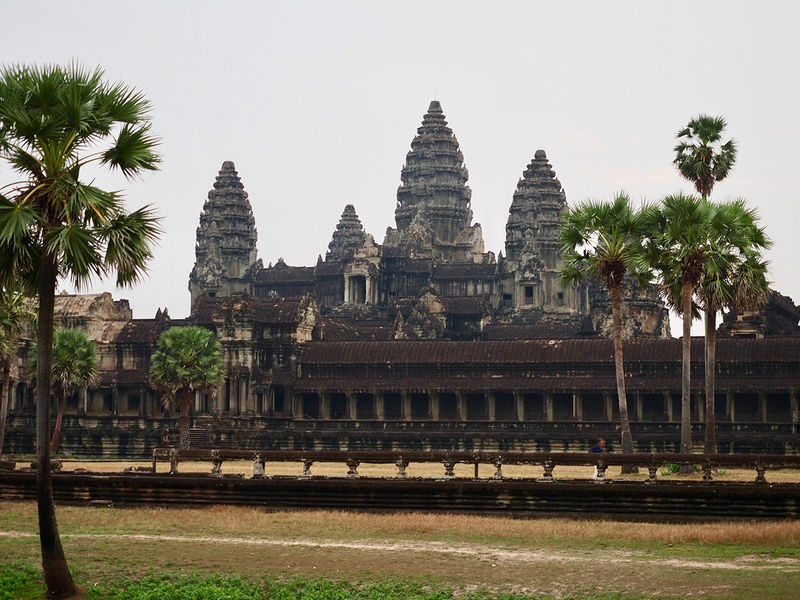 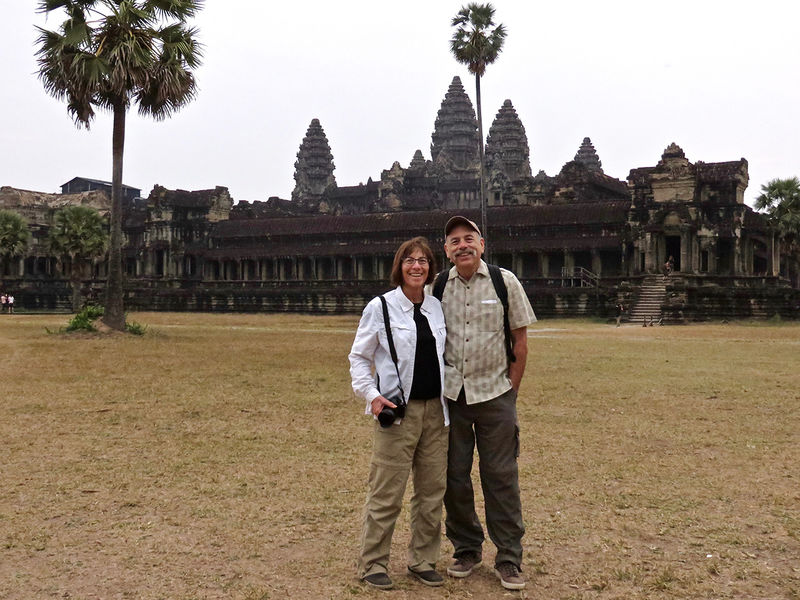 "The largest religious monument in the world, Angkor Wat literally means "the City which is a Temple". Built during the 12th century by King Suryavarman II, this spectacular complex was originally dedicated to the Hindu god, Vishnu. The layout is based on a mandala (sacred design of the Hindu cosmos). A five-towered temple shaped like a lotus bud, representing Mount Meru, the mythical abode of the gods and the center of the universe, stands in the middle of the complex.The intricate carvings on the walls marking the temple's perimeter are outstanding and include a 1,970-ft (600-m) long panel of bas-reliefs, and carvings of apsaras (celestial dancing girls).The outermost walls and the moat surrounding the entire complex symbolize the edge of the world and the cosmic ocean, respectively. Angkor Wat, unusual among Khmer temples, faces the setting sun."
After a few pictures, we walked south to see some of the mural wall. 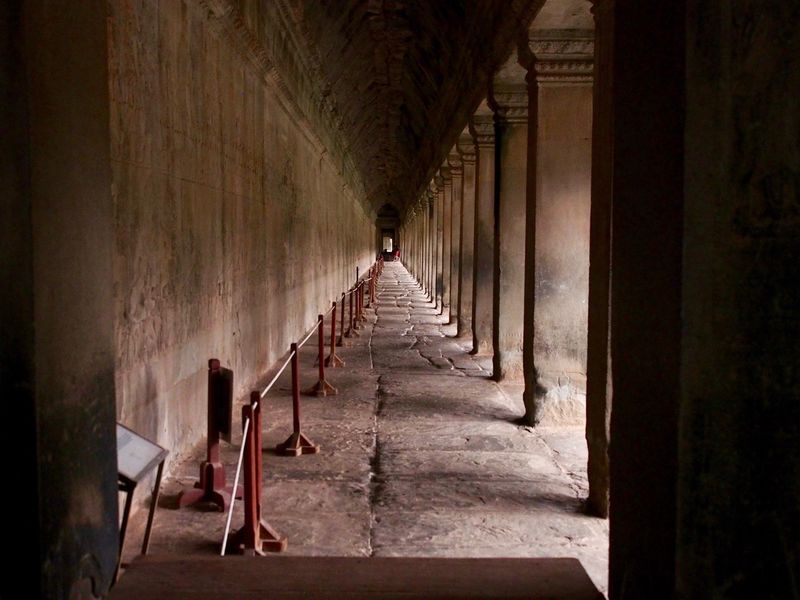 Heading up to the second level. 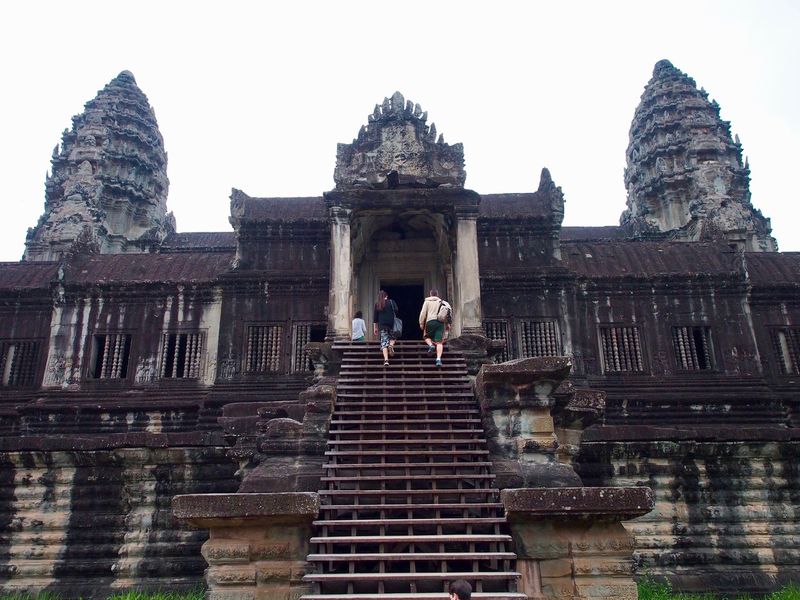 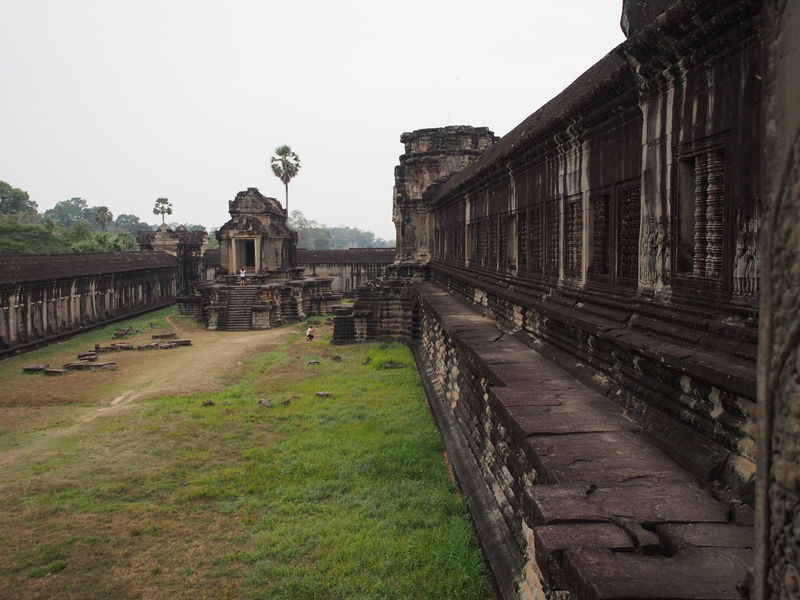 We moved along to be able to stand in line around 6:30 am for third level. The third level is count-limited. While we waited in line, we talked about the laterite (volcanic) rock used as a foundation under the sandstone. Here, some of the sandstone is missing and the laterite is showing. 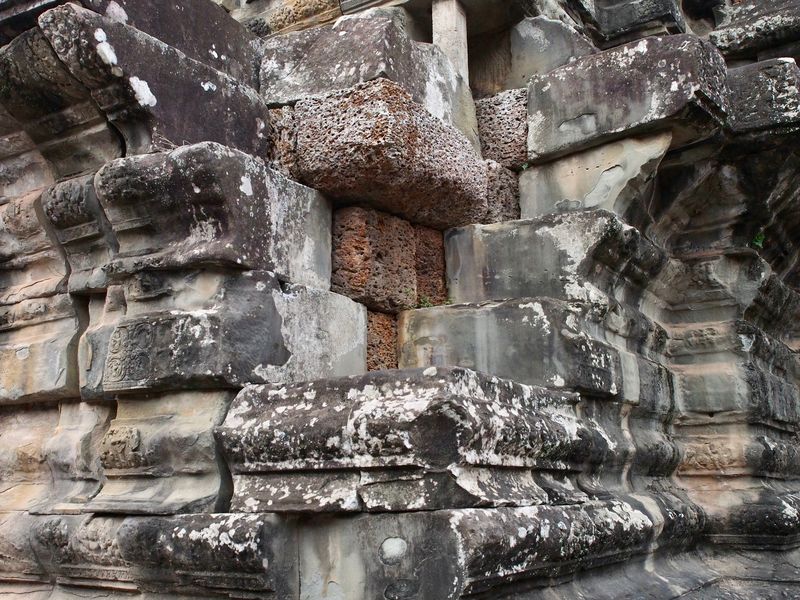 Our turn came and we walked up the steep stairs about 6:50 am. We walked around the entire perimeter of the third level with the central tower in the middle for about 30 minutes and headed back down to the second level to meet Mony.
Looking out from the third level. 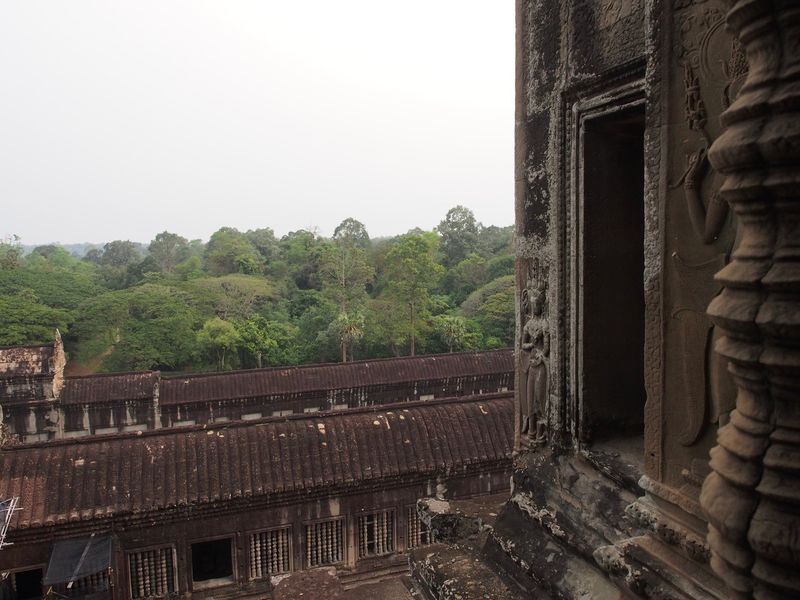 Looking back down to the second level. 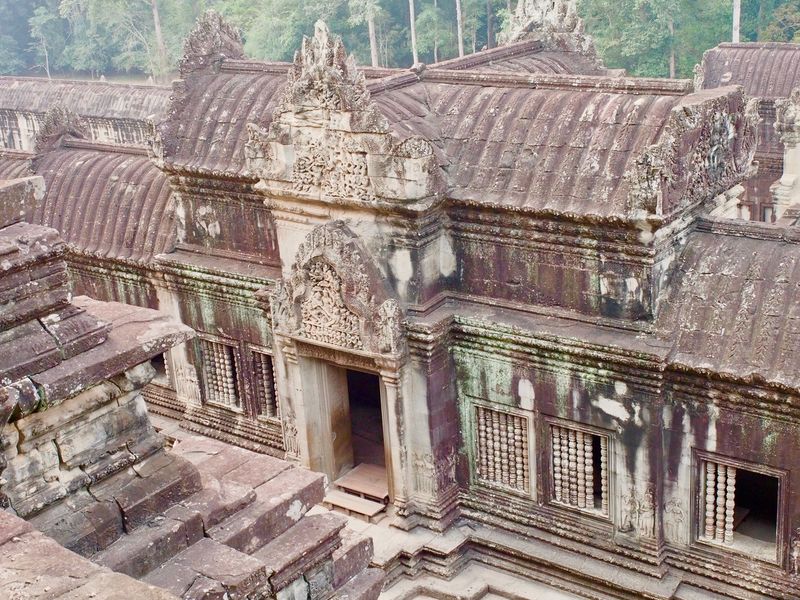 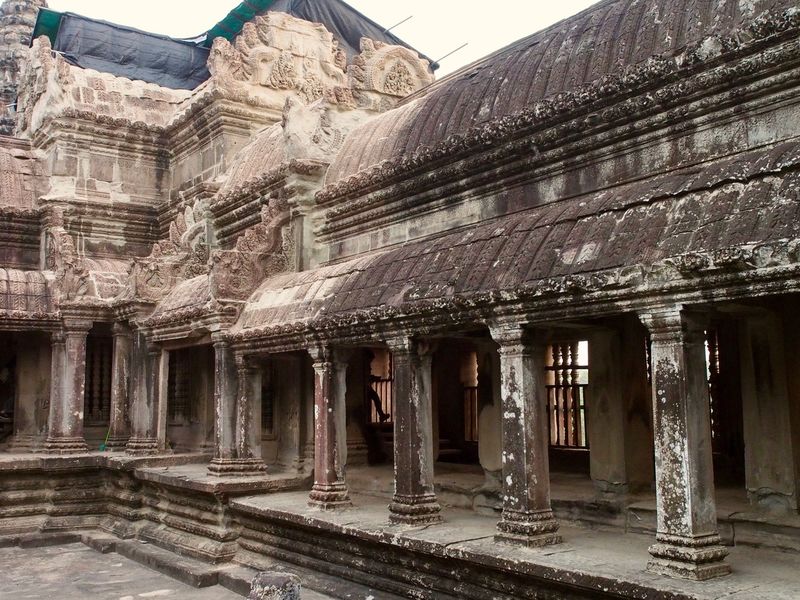 Another view from the third level. 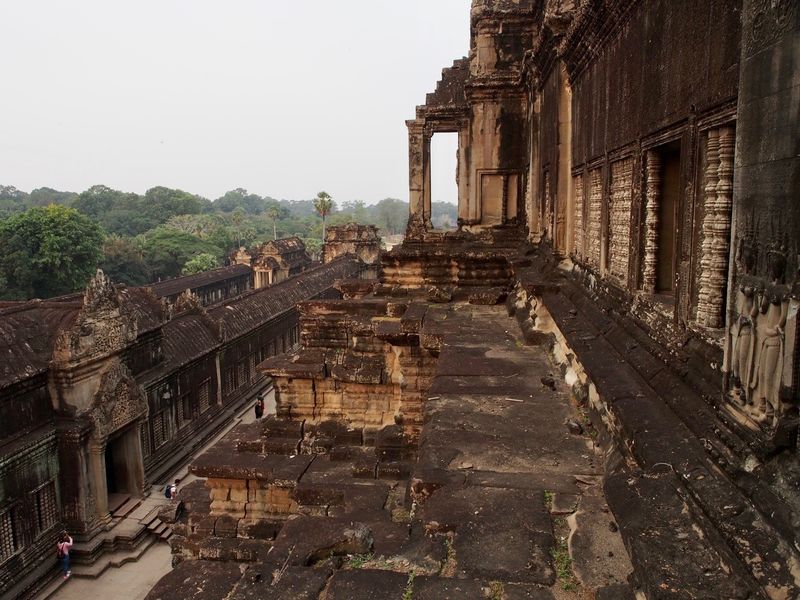 Larry’s art shot, with the sun glinting off one of the window columns. 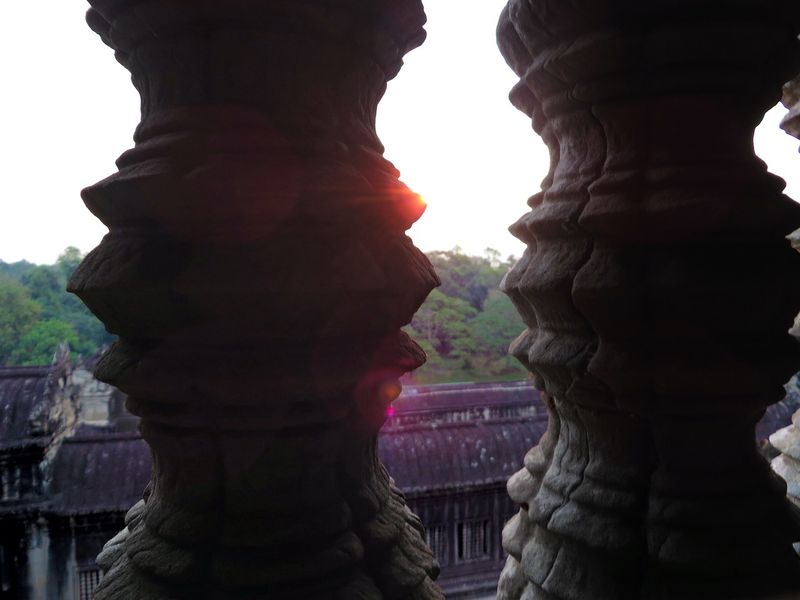 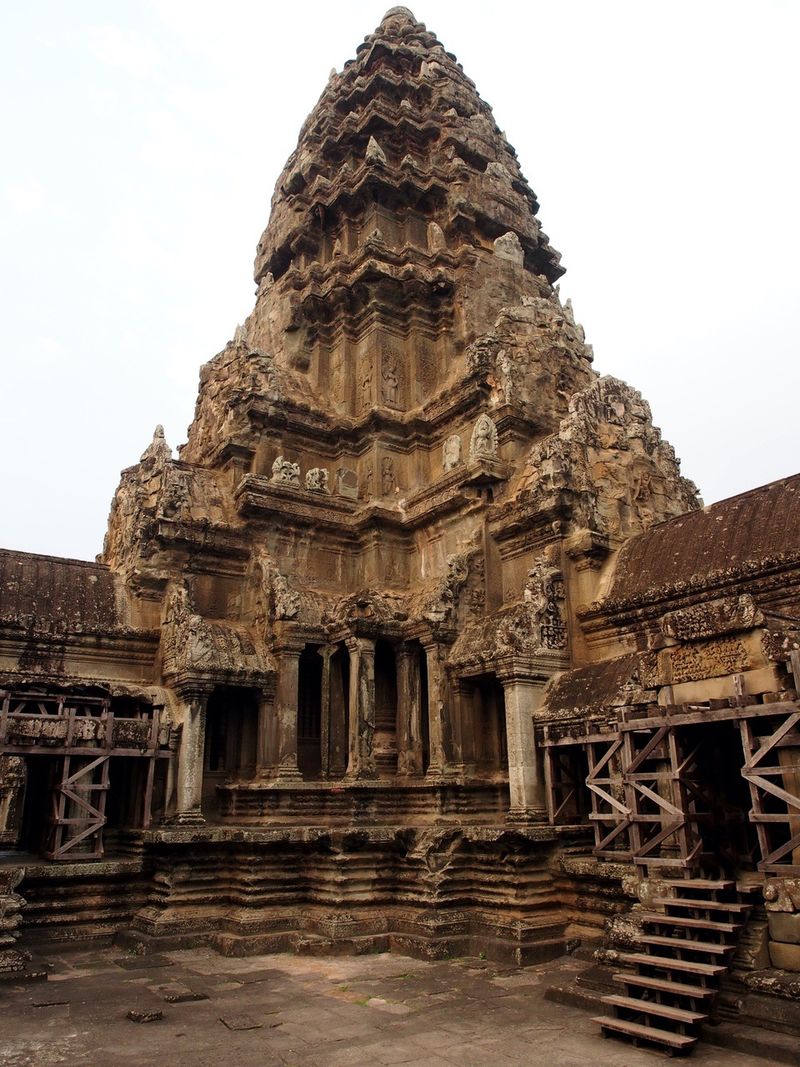 After coming back down to the main level, we walked around the complex.
Another mural of the churning of the sea of milk for the elixir of life. 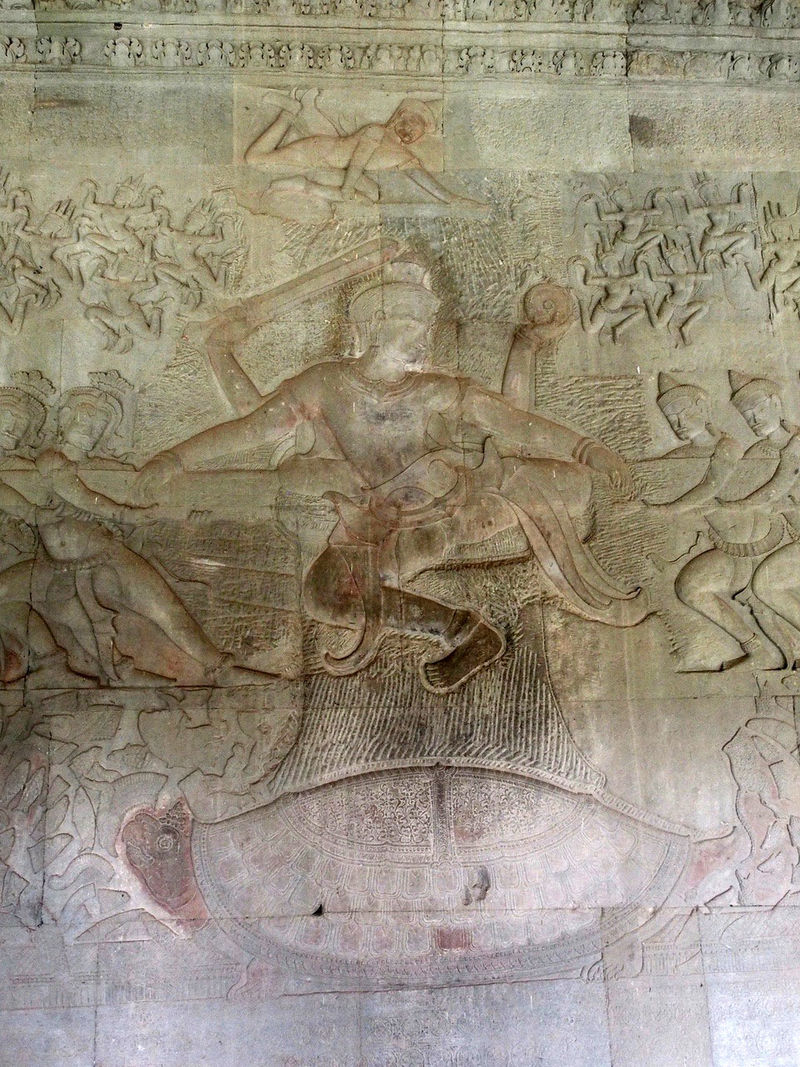 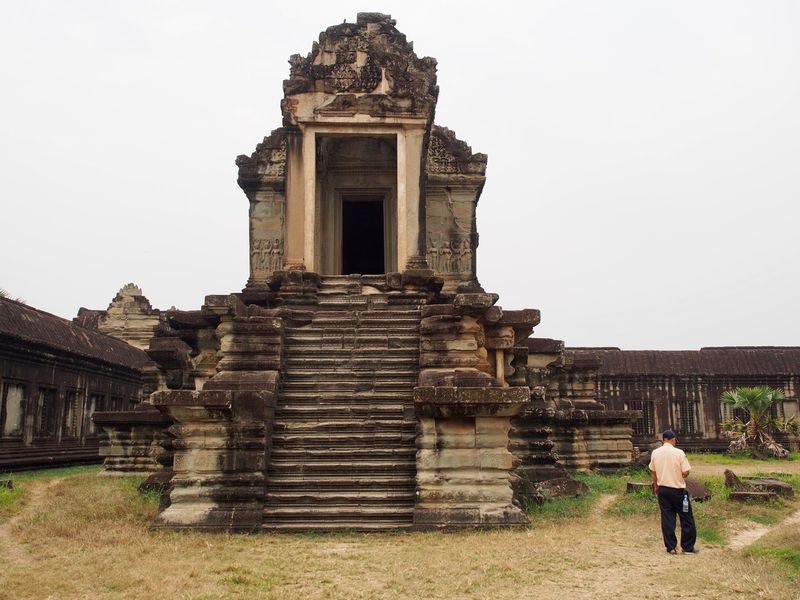 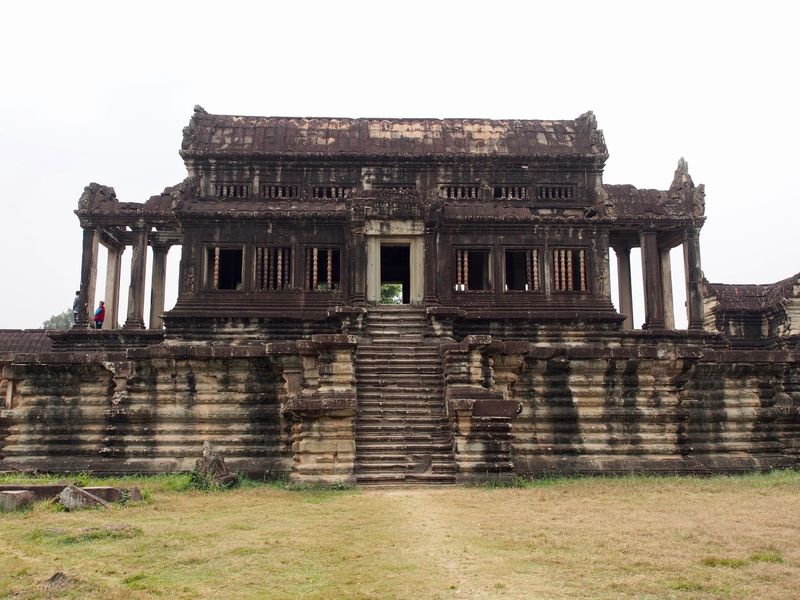 One of the four sacred ponds. 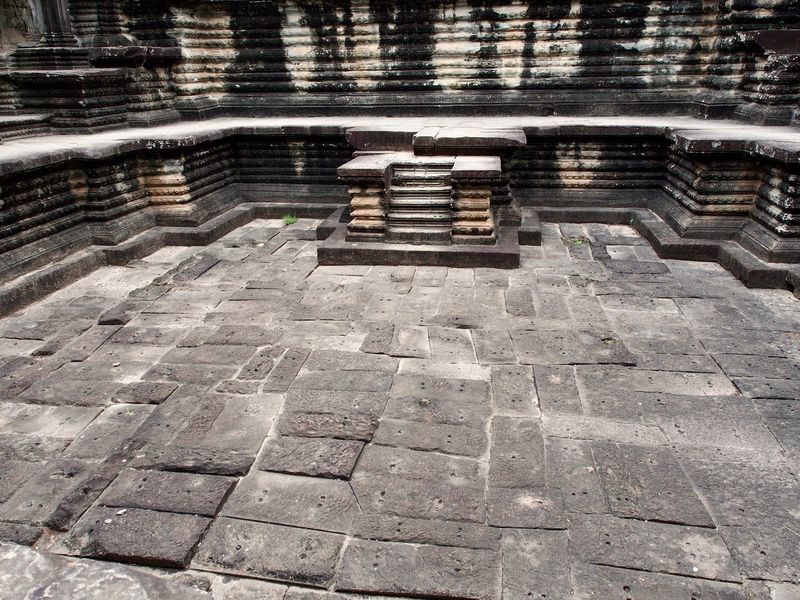 We then headed back out and looked back frequently at the beauty of it all. We left by the west gate across the causeway and pontoon bridge. 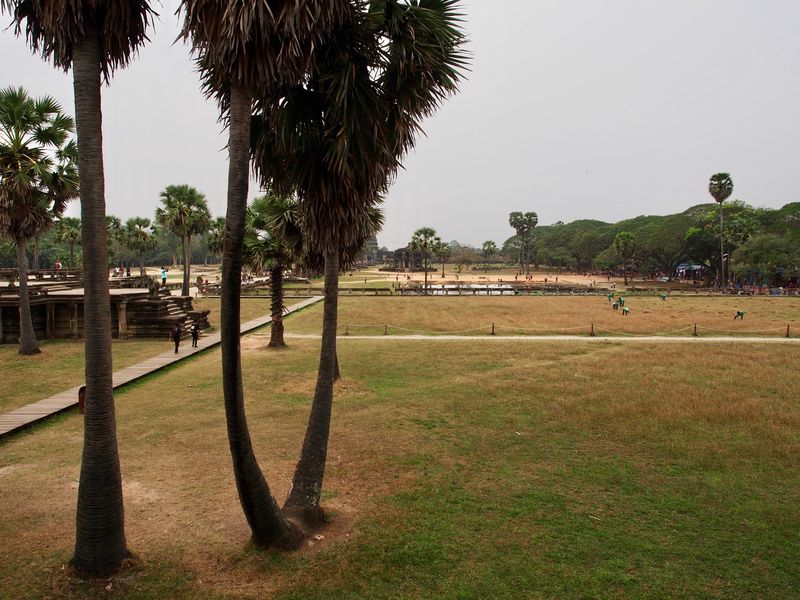 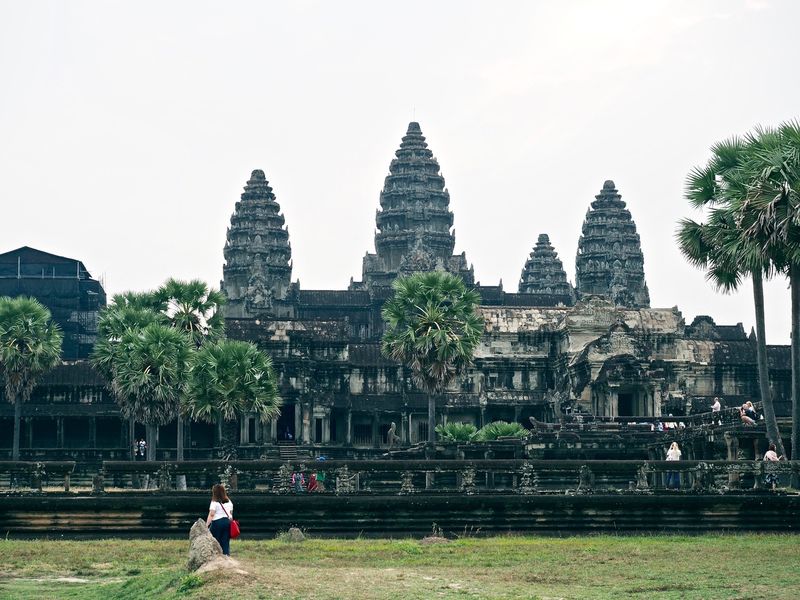 Lillies and lotus flower in the ponds on the west side. 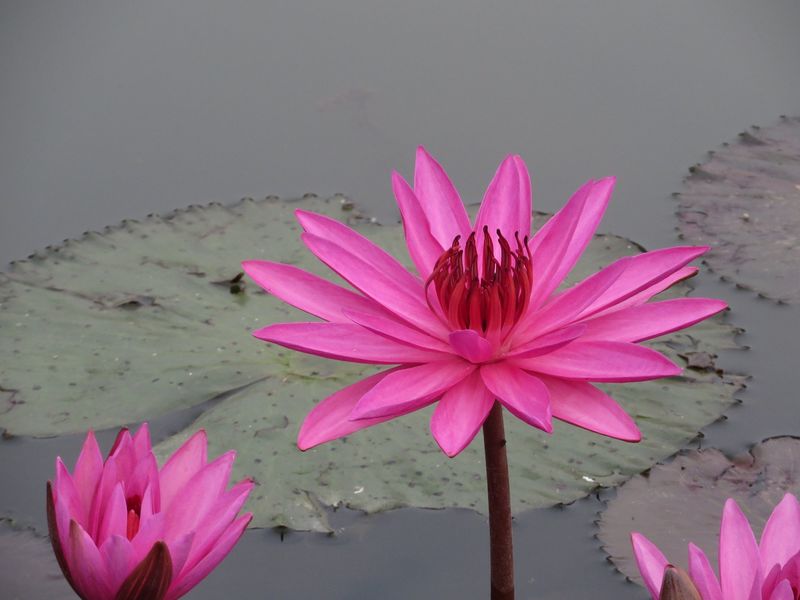 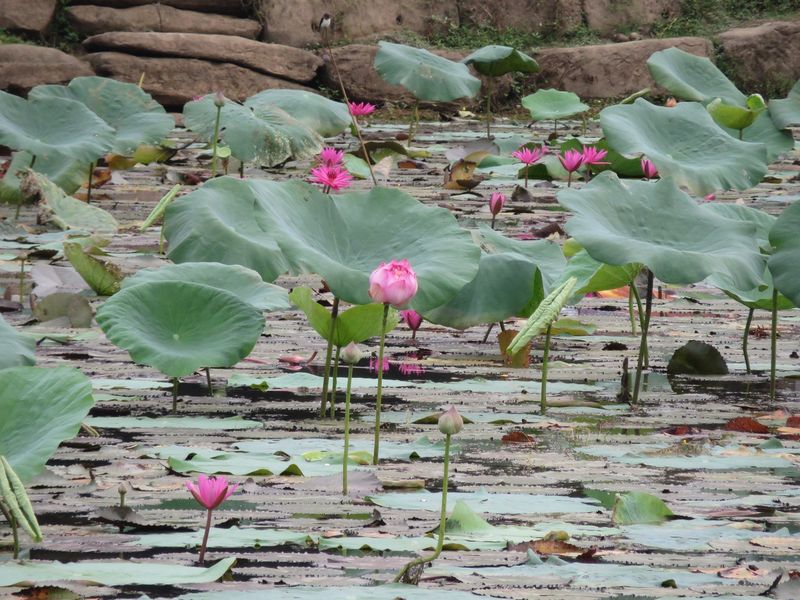 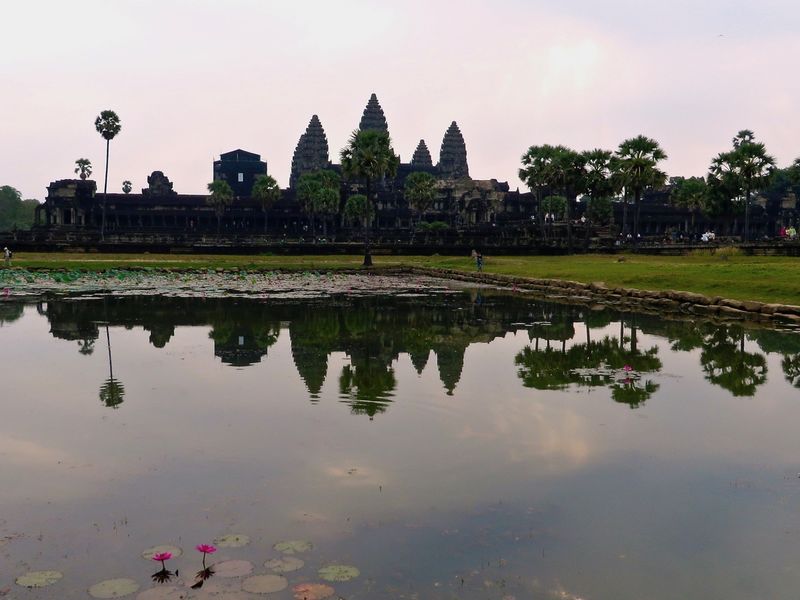 Devada, also a dancer, male or female, but not as sensual as the aspara dancers. Mony called them angels. 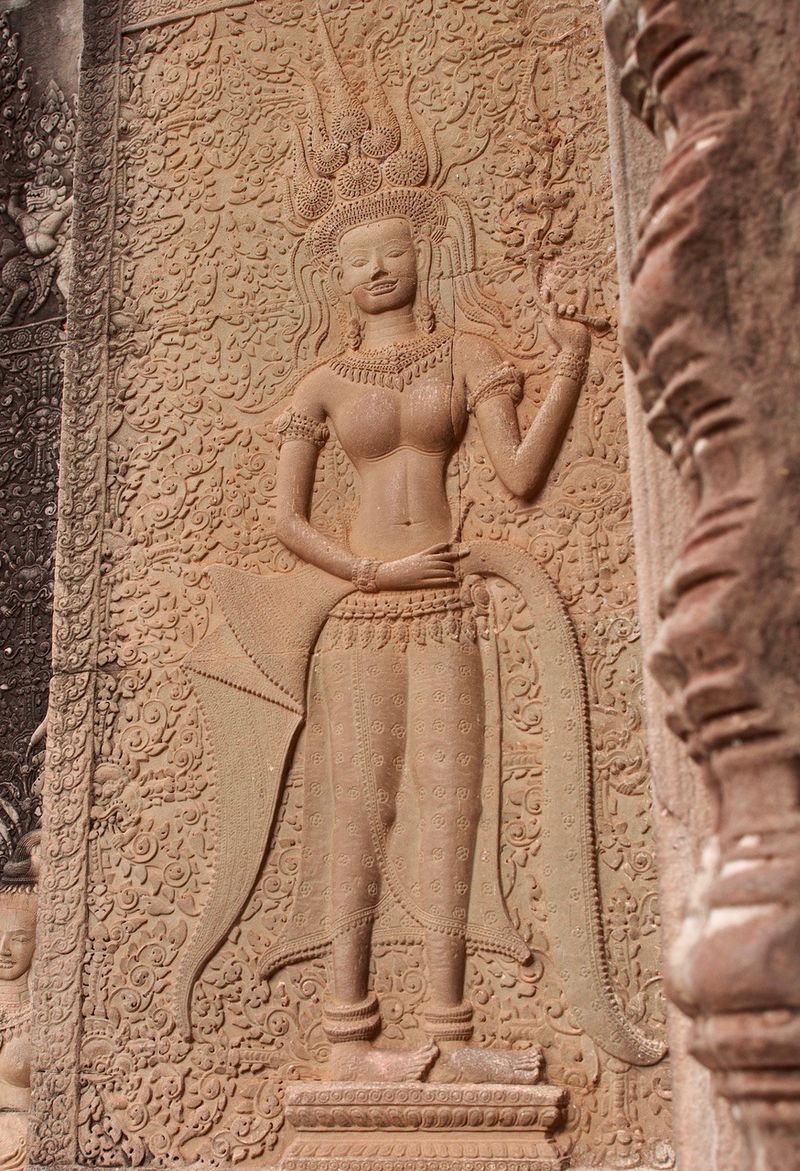 And of course, Naga’s head. 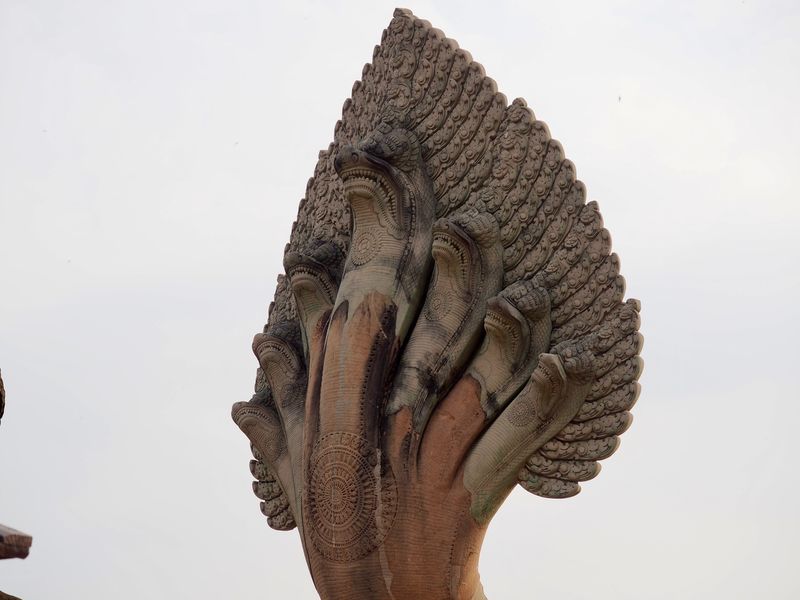 Published by Eileen and Larry Samberg on February 3rd, 2018